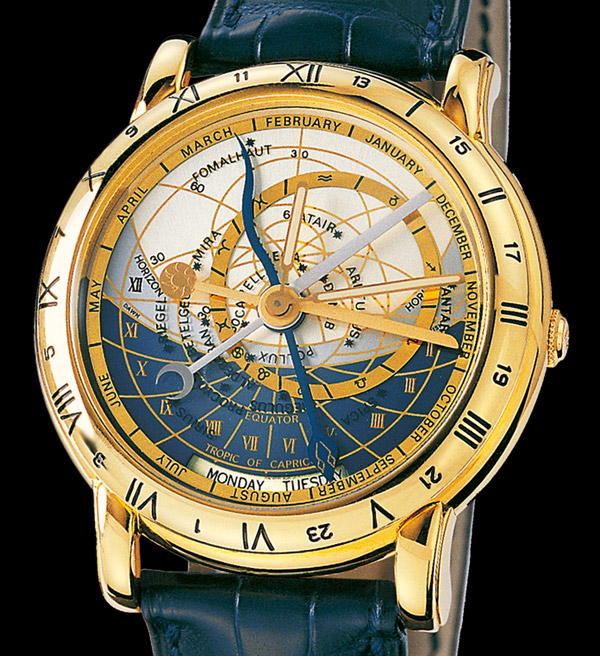 Ask someone wearing a Ulysse Nardin Astrolabium Galileo Galilei watch what time it is, and they may be forced to flash their wrist at you rather than respond. So what time is it? Your guess is as good as mine. While I can figure it out, this watch reminds me a Dr. Seuss creation gone wrong (all it needs is fur of some sort). So much information, it is virtually a practical joke.

The watch is touted as providing information useful to astronomers. Meaning they need something to distract their view for a couple of hours while they figure out what time it is? All kidding aside, this is a nice looking watch, that costs a bundle (used one is on eBay right at over $20k). Only thing, is that it is helplessly confusing. If you study a list of all the features it purportedly has, you’ll agree it is impressive, if not overkill. Here is one of those machines that tells you real information, but information nonetheless you don’t need to know. 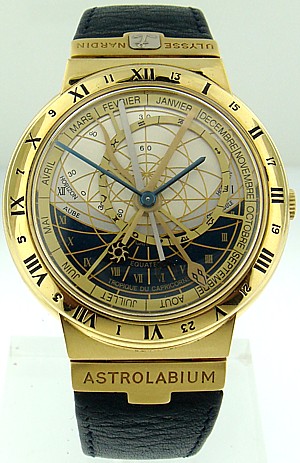 An example? It indicates the “Draco line.” Yea, that is what the little snake hand represents. Yea, I’d never heard of it before either. Think of the center of the watch as the Earth, and that smaller non-centered circle as an orbit (of the Earth maybe, or perhaps the moon?). You can use the Draco line indicator to know when the Sun and Moon line up with the Earth to create an eclipse. I know, that doesn’t occur to often, but when it does (assuming you’ve learned how to read the Draco line), you’ll know about it.

The watch also tells you solar and lunar time, which again does not really matter to most people. It also has a calendar function which is cool, but again, you’ll have to figure out how to use it. Looking at the complex series of lines and information on the face of the Astrolabium (why does that sound like something on a space woman?) reminds me a sextant or other antiquated piece of navigation equipment. It might have proven useful to a select number of people at one point, but today, it is just an expensive novelty. As I have said for other watches, imagine your watch winder breaks, or for whatever reason this watch stops? Another 4 month long trip the Ulysse Nardin shop for “reprogramming.” If you ever have the opportunity of wearing one of these watch around for the day, you’ll find yourself asking other people what time it is, because you’ll be damned if you are going to find out for yourself.

The price of these watches was, astronomical, when they first came out. Today you have fetch one for $15,000- $25,000 depending on the style and condition of the watch. Even if the information on the watch is hard to read, you have to admit there is a level of intrigue involved when looking at the watch. A childish sense of “how does that work, what does that do?” Perhaps this is a larger purpose of the watch, to instill a sense of wonder at what the complex mechanism is even supposed to do.

This watch is one of a series of astronomical based watches created by Ulysse Nardin, and others for that matter. It is amazing to realize such watches even exist, and I have no doubt that the effort went into them is nothing short of genius. None of that changes the fact that it is awkward to look at, and even less pleasant to imagine owning as a daily timepiece. No, its meant to sit in a box and look intimidating; and for some reason you want one.