With a case design inspired by F-117 Stealth Fighters and an exterior finished by lasers and human hands, the Blast collection expands with its most complicated version to date: the Ulysse Nardin Blast Hourstriker. 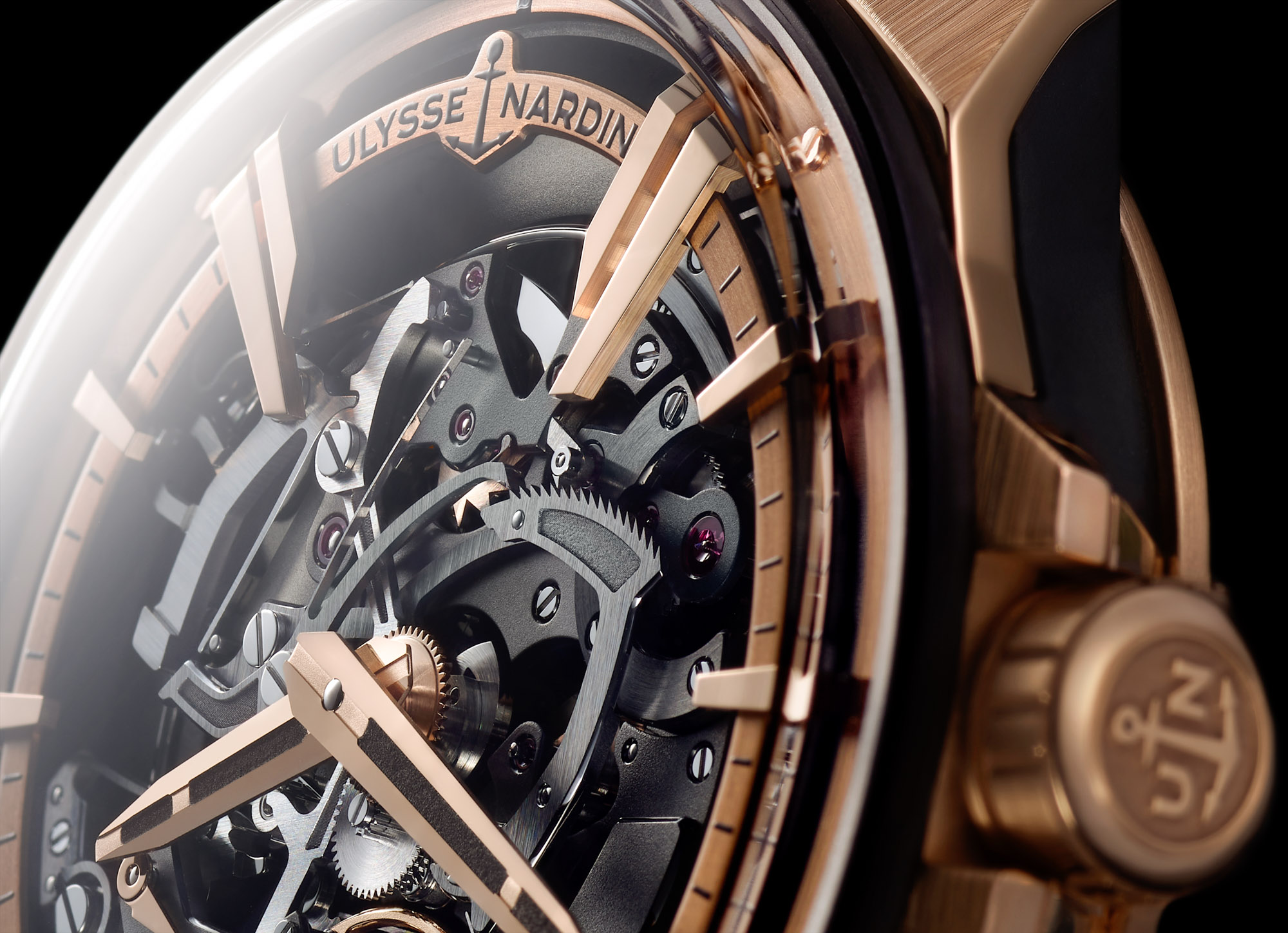 Ulysse Nardin has a long and diverse history of all sorts of chiming watches, from discreet, solid-dial dress watches that only chime the hours to minute repeaters with explicit erotic scenes coming into motion through mechanical automata, we have seen a lot of different chiming watches from Le Locle. The Blast Hourstriker harkens back to those old (and I do mean old) days when time was not read but heard — thanks to the brilliant engineering of clock towers, then domestic clocks, then pocket watches and, in the end, by wristwatches. Placing a chiming clocktower’s mechanics into a wrist-worn timepiece is hard, but Ulysse Nardin leaves little to one’s imagination as to how hard: the open dial reveals a microcosm of cams, snails, and wheels, all of which come to play when the well-heeled owner wants to hear it chime. 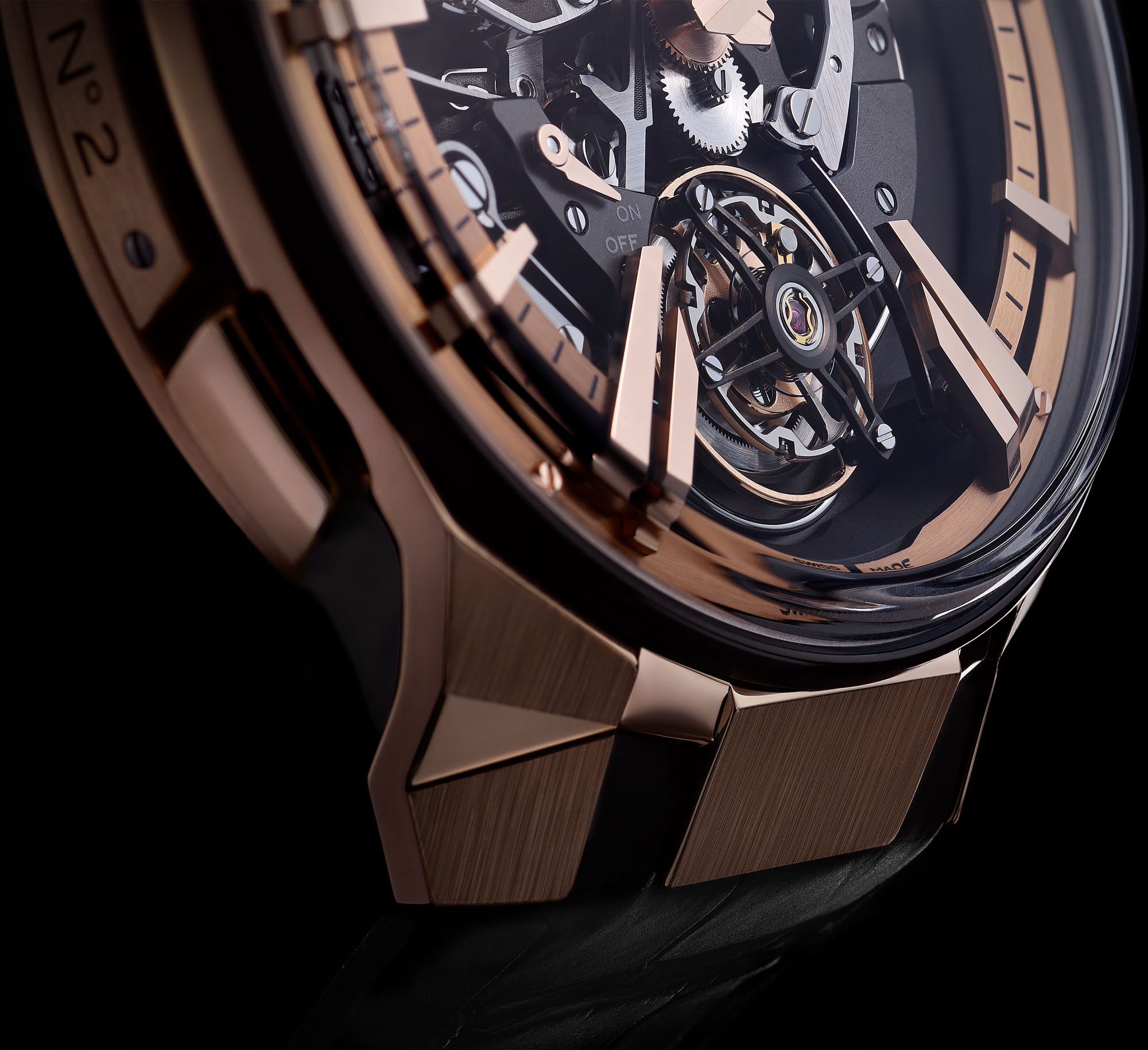 Ulysse Nardin explains: To improve the acoustic performance of the Blast Hourstriker, “its 330-component UN-621 movement incorporates a titanium membrane developed in collaboration with Devialet – the French audio technology company with whom Ulysse Nardin worked on its torsion lever used in 2019’s Classico Hourstriker Phantom; one of whose co-founders is a direct descendant of the Ulysse Nardin family. As in the Classico Hourstriker Phantom, the torsion lever connects the heel of the gong to the fine membrane. This diaphragm is 3/10th of a millimeter thick and treated with black DLC, which offers a large deformation area, which, when under load, moves a large volume of air, which improves the audibility of the sound produced. The Blast line’s signature double X cut into the rose gold caseback, also ensures the security of this sensitive Devialet membrane, which, once in action, basically acts like a hi-fi speaker – releasing and amplifying the gong’s sound.” 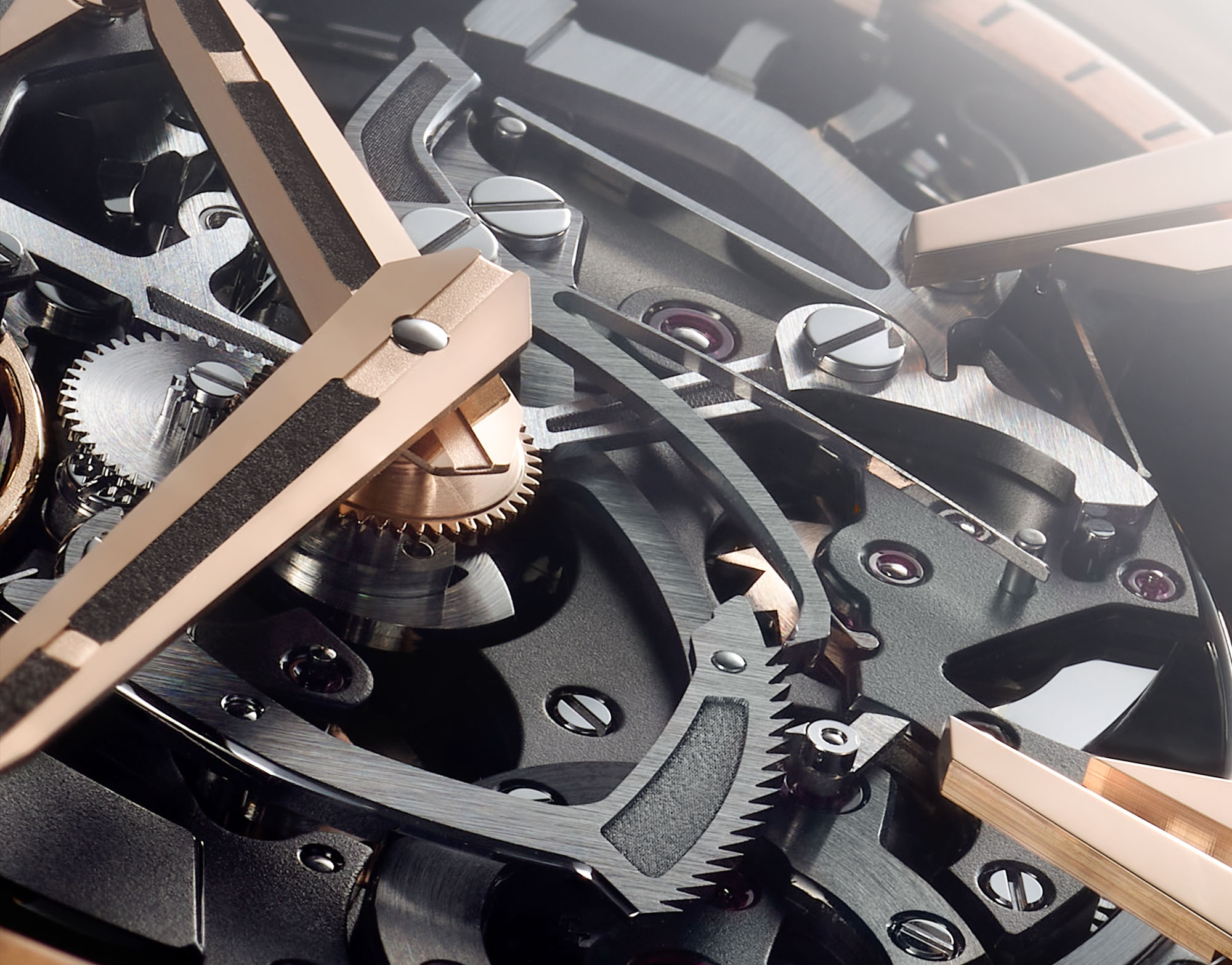 The Blast case and its unique angles and surface treatments we have discussed in detail here. For now, suffice it to say that the angles on the case are impossible to finish using traditional methods (that are used to finish 99.999% of other luxury watches) and so a combination of hand finishing and algorithm-based laser etching had to be developed. While Hi-Fi-like membranes in your watch are cool – especially so if you’re a wealthy music producer looking for a new chiming watch to rock –, the sort of know-how that comes from these surface treatments I find a lot more fascinating because it has a lot greater chance to trickle down into other fascinating case designs on relatively more affordable watches distinctly without flying tourbillons or striking mechanisms. So yeah, I’m looking forward to those. 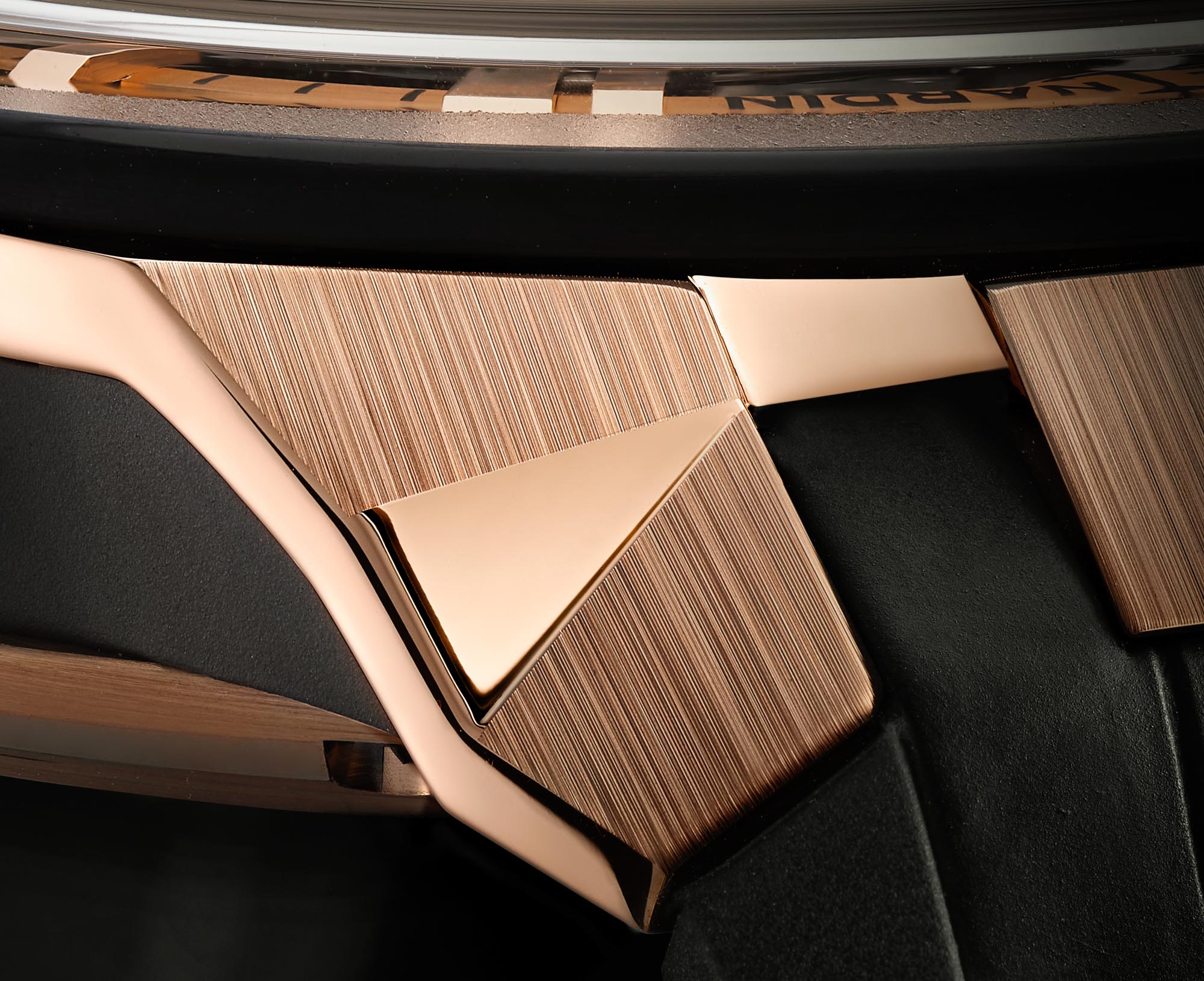 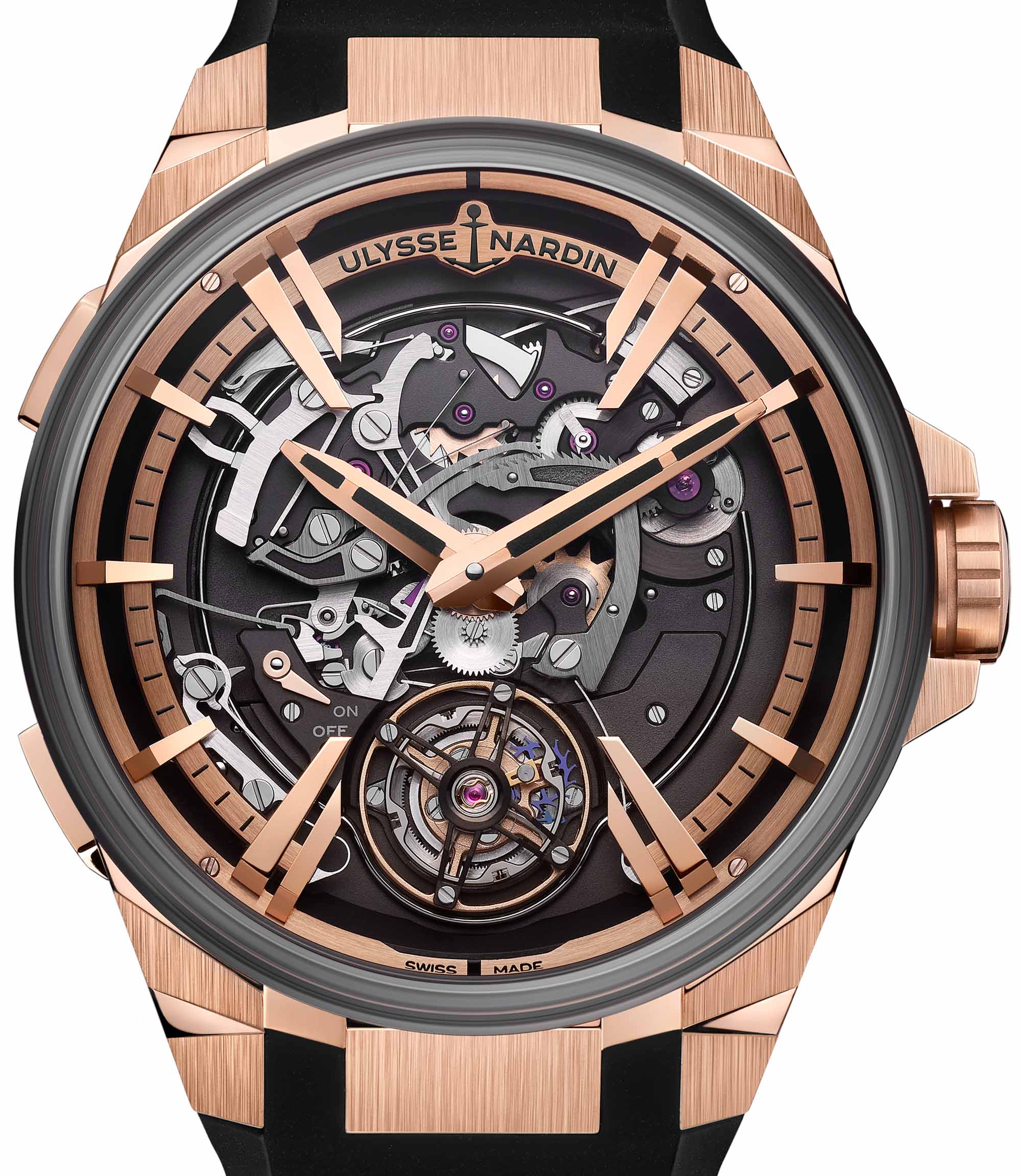 The 45mm-wide case features 5N rose gold and black DLC-coated titanium components along with two pushers: one to turn on or turn off the automatic hour-striking mechanism, while the other initiates the striking of hours and half hours on demand. The movement features self-winding for the flying tourbillon’s 60-hour power reserve and hand-winding for the chiming that has its own power source.

Price for the Ulysse Nardin Blast Hourstriker is $104,000, and I so wish we could see it, hear it, and video it at Watches & Wonders this year. Maybe next time. You can learn more at the brand’s website.