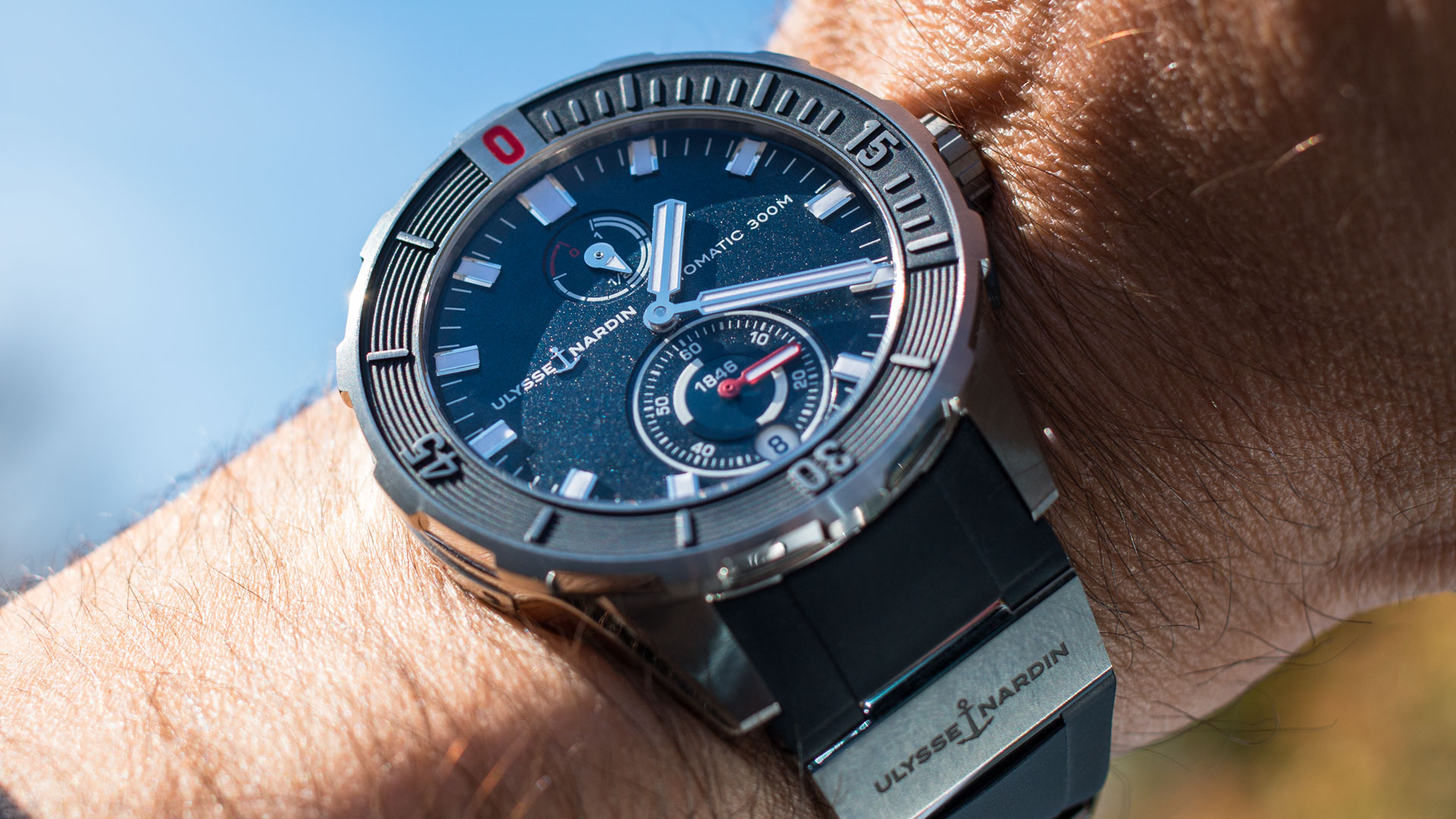 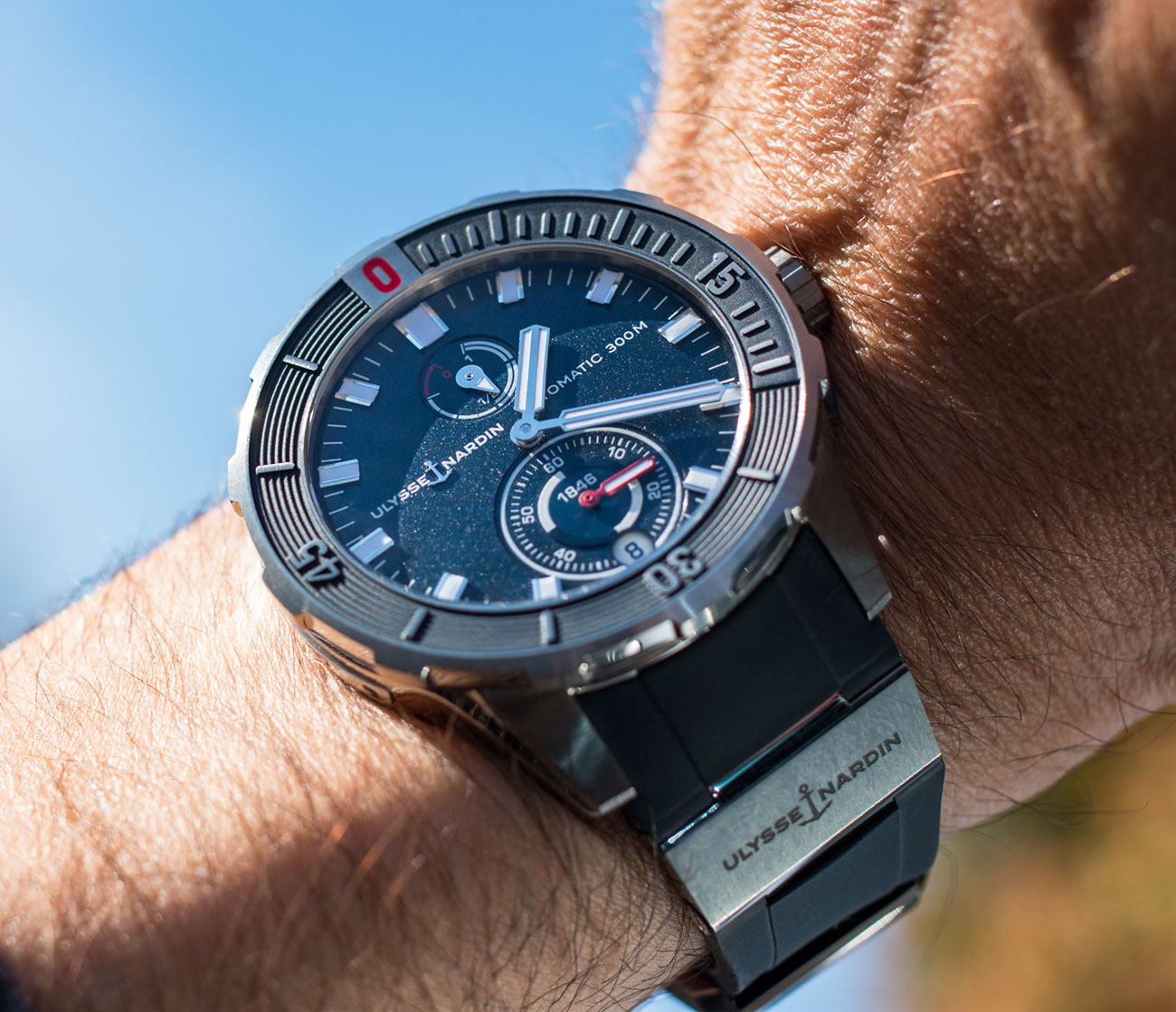 What kind of dive watch would you expect from a brand like Ulysse Nardin but a lavish and luxurious one? While not abandoning the original idea of dive watches as tools intended to be worn and beat up, the Ulysse Nardin Diver Chronometer is an elegant and refined luxury diver that is probably most appropriate for people specifically into yachting – whether or not they are also into diving. There is certainly room for a unique option like this in the circa-$8k luxury dive watch segment, in my opinion. An inescapable nautical theme might narrow its appeal, but Ulysse Nardin offers something refreshingly out of the ordinary among the many safe, familiar, and conservative designs it is competing with. 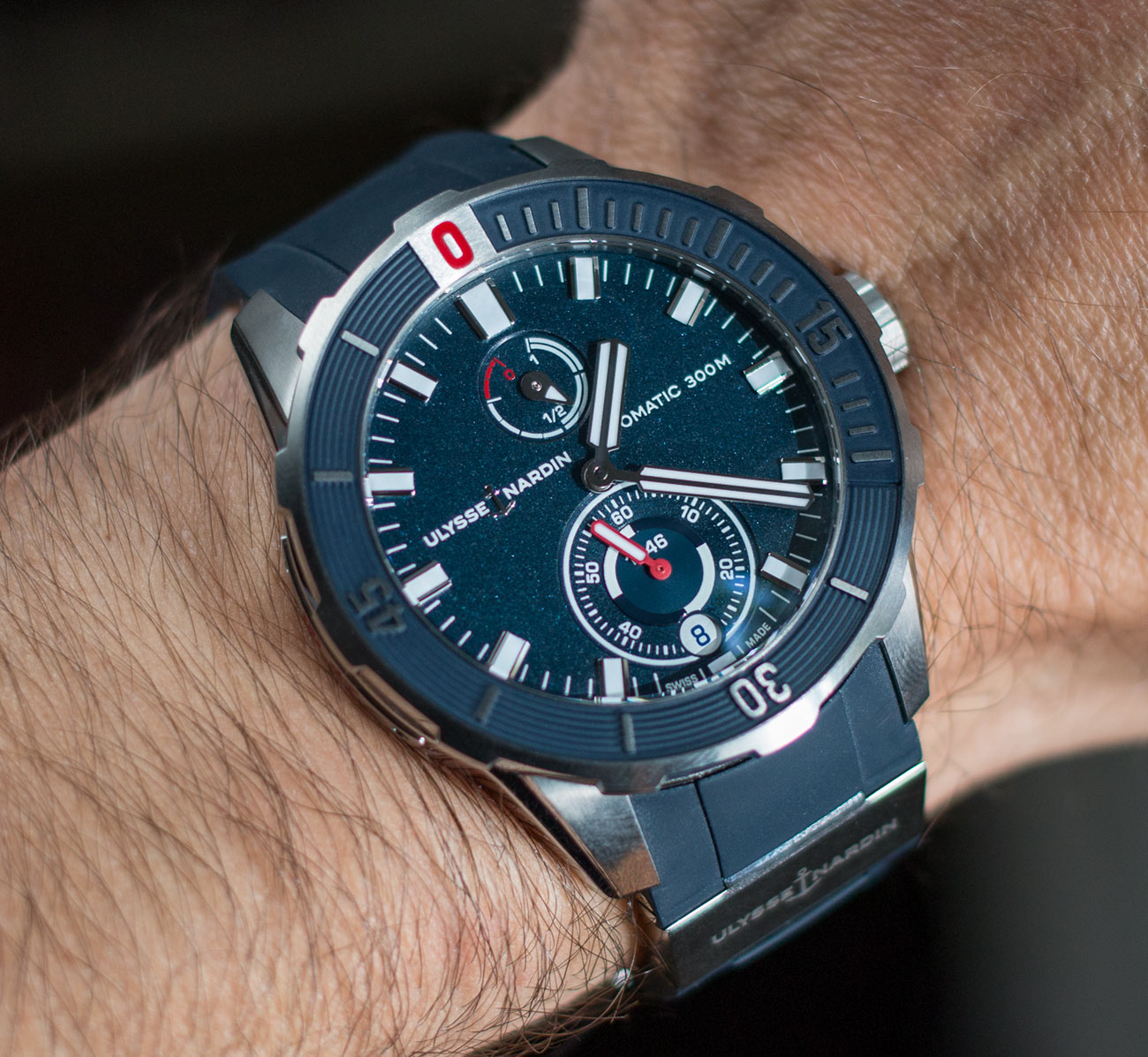 The Ulysse Nardin Diver Chronometer is a core collection for the brand, and it has been through multiple refreshes over the years. For 2018, the brand introduced updates to about every part of its design. Note the differences we discussed when this new Ulysse Nardin Diver Chronometer generation was announced, and compare it to the outgoing 2014 version that was announced here, which was itself a redesign. Simplified and dialed back but retaining the collection’s established sense of flair, it seems as if each element of the case and dial has been tweaked for 2018. 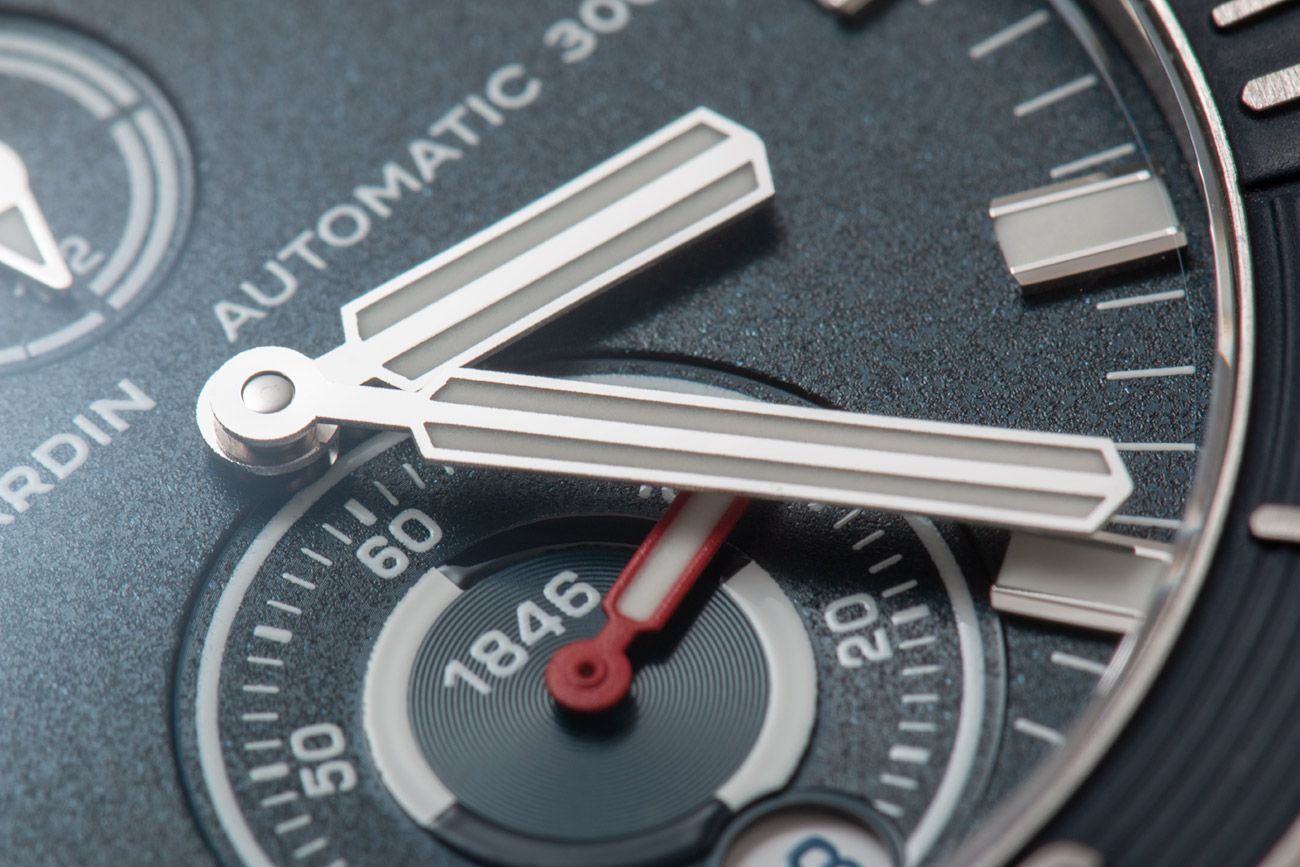 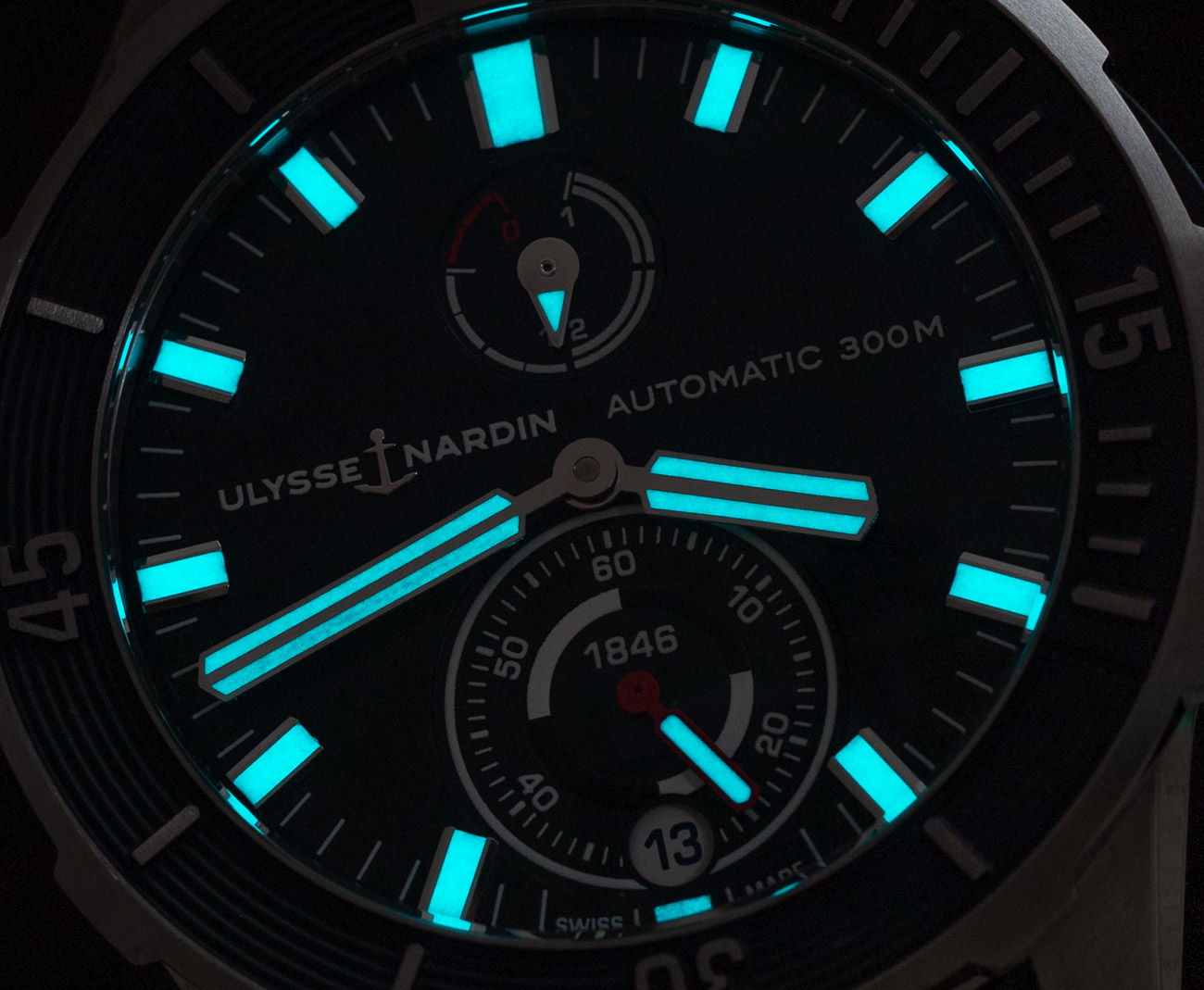 The outgoing version’s wavy dial pattern has been replaced by a grained texture, and mostly skeletonized hands have been substituted for straight, lume-filled ones. These are features that help legibility on any watch. The now shorter indices make the dial appear more balanced and clean to me, and the bezel’s redesign is more elegant. Even with all these changes, it remains unmistakable as a Ulysse Nardin Diver Chronometer – how did they do that? In any case, I will try not to focus on every last little difference compared to the previous version, but when looking closely, each element has been thoughtfully considered and executed. 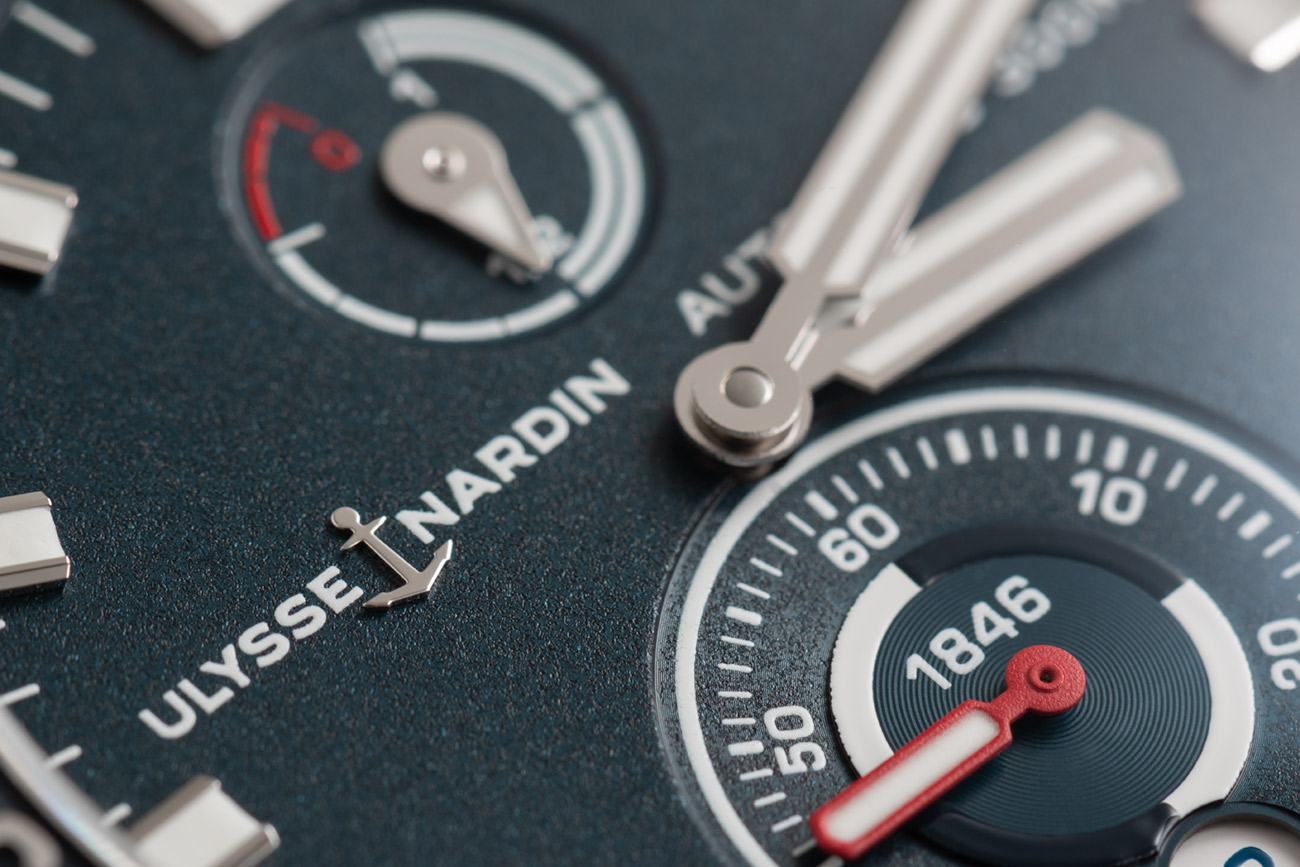 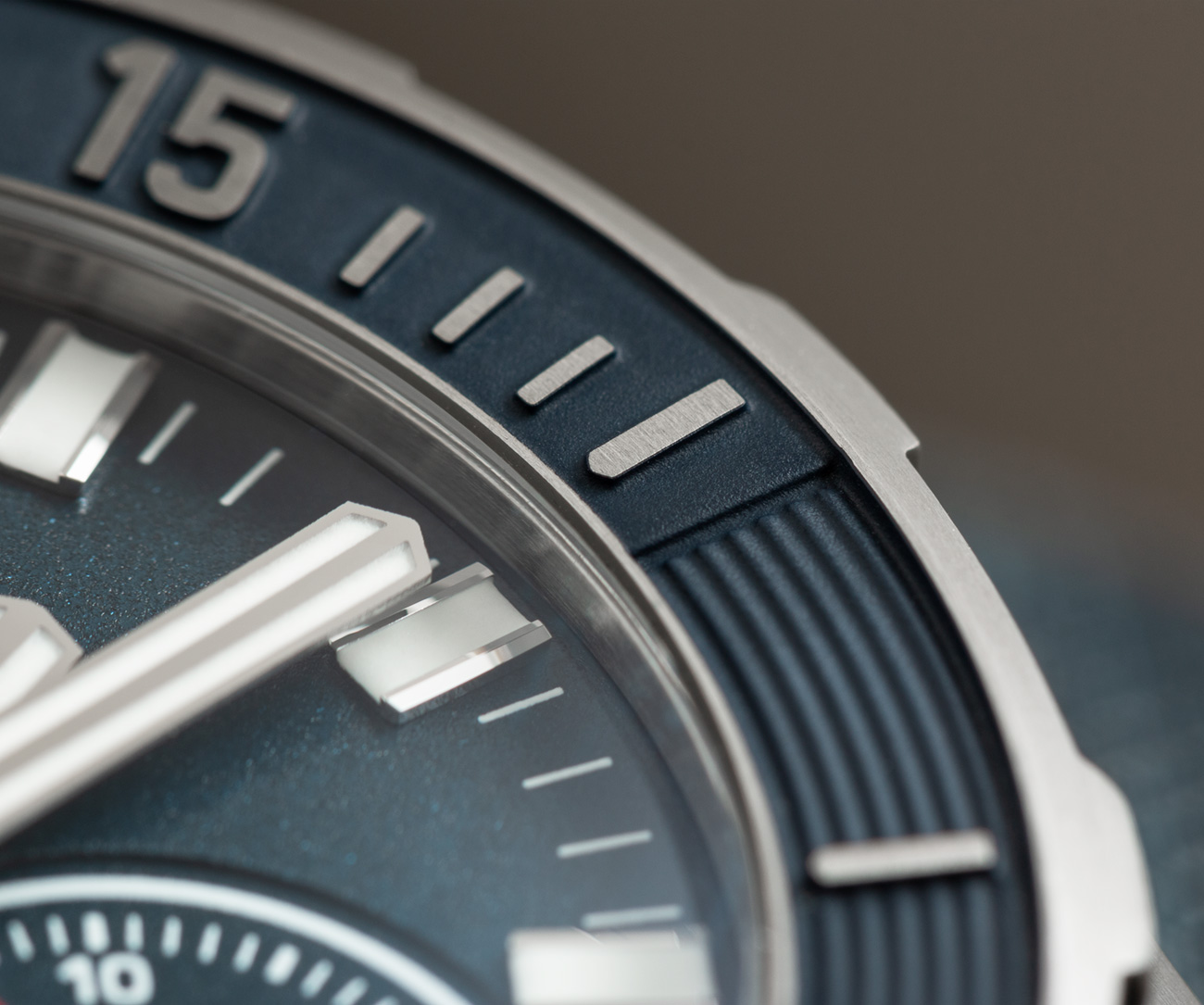 Looking closely is most certainly what you are meant to do with the Ulysse Nardin Diver Chronometer. About every nook, cranny, bevel, and angle has a meticulous level of detail and finishes, many of which will easily be overlooked without a watchmaker’s loupe or a camera’s macro lens. Just how involved the bezel and its insert are, for instance, escaped my attention at first. This level of detail is totally unnecessary for a dive watch, of course. While many “luxury sport watches” apparently with the specs to get beat up are far too expensive to actually do so, there’s no need to explore that topic further here. I’m sure it can take it, but I would hate to see something like the Ulysse Nardin Diver Chronometer abused. 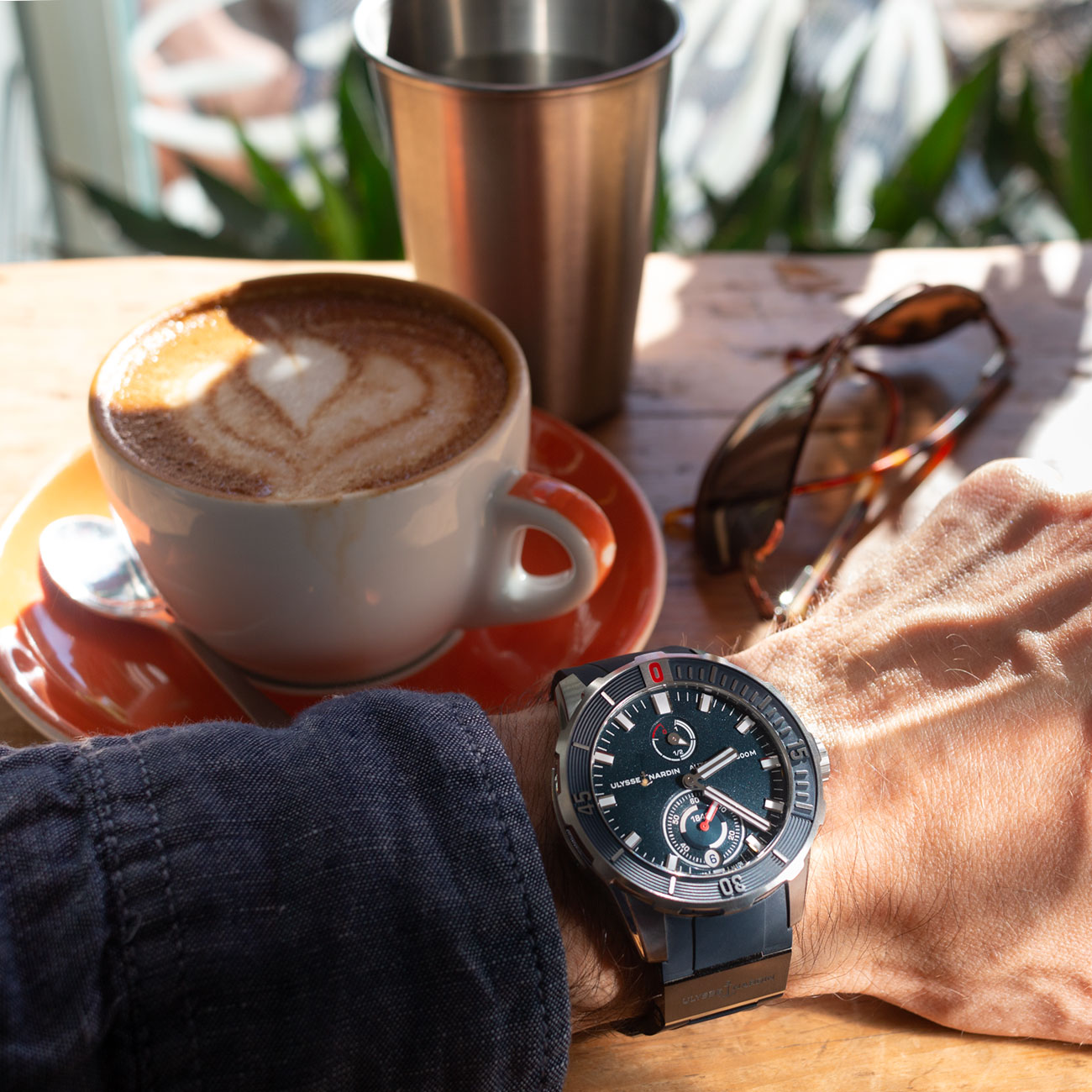 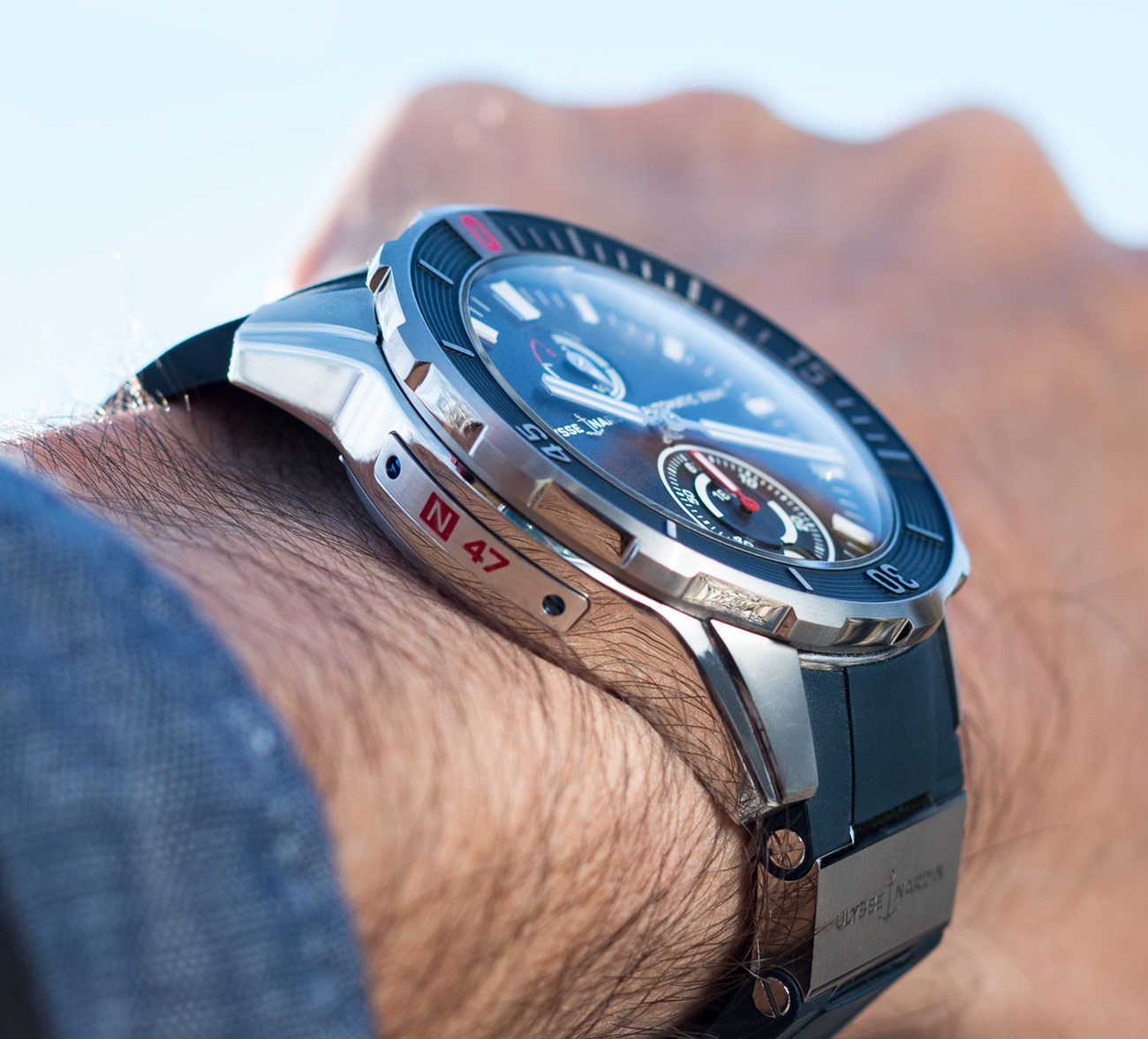 At the same time, however, I would also hate to see it babied too much, as it’s clearly meant to be worn. Just don’t do so while working on the boat’s engine, please. It is light and comfortable in titanium with a 44mm-wide architected and detailed case – fitting under a loose cuff, though not so well under a snug one. The standard 300m of water resistance, necessary for the “professional dive watch” designation, should be more than sufficient for normal use, or even diving. There are some “boat-themed” watches out there that oddly don’t really even seem ready to be near the water. So while professional dive watch standards might not be necessary – they are overkill for the vast majority of dive watch use anyway – the crossed diving and yachting theme of the Ulysse Nardin Diver Chronometer makes total sense to me. So often, that water-resistance is just a promise of general durability anyhow, and durability is something we can all appreciate. 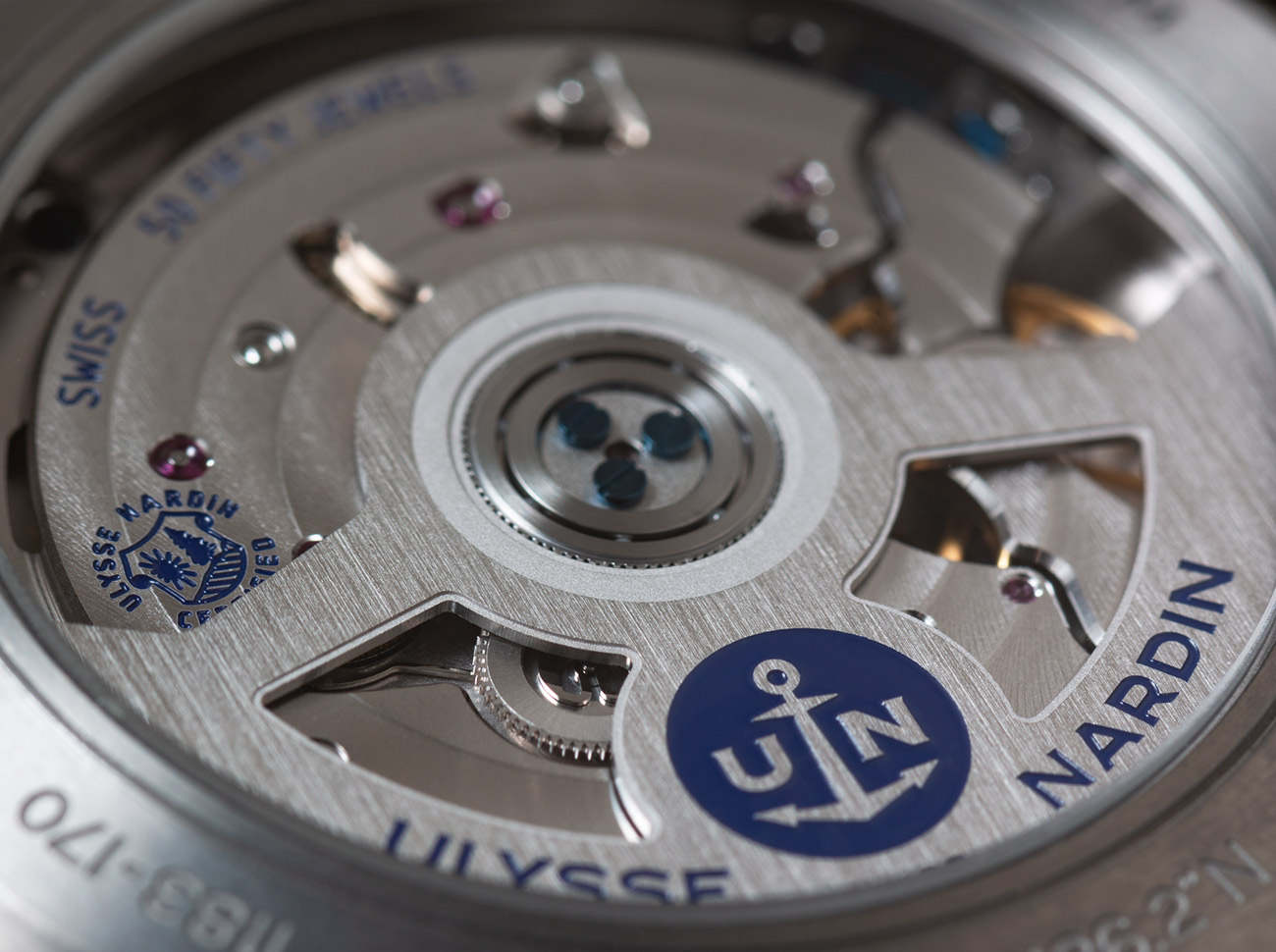 Fancy dive watches are for more than diving, agreed? Something like the sapphire crystal exhibition caseback displaying the in-house UN-118 movement is another example of a totally unnecessary but welcome feature. I appreciate a dive watch with a display caseback, even with more pedestrian movements like the Oris Aquis Date reviewed here because many dive watches have solid casebacks, and offering the window means more effort toward achieving the same water-resistance rating. It’s one more thing that Ulysse Nardin can do to stand out among its competitors. And the UN-118 movement is worth displaying and examining more closely.