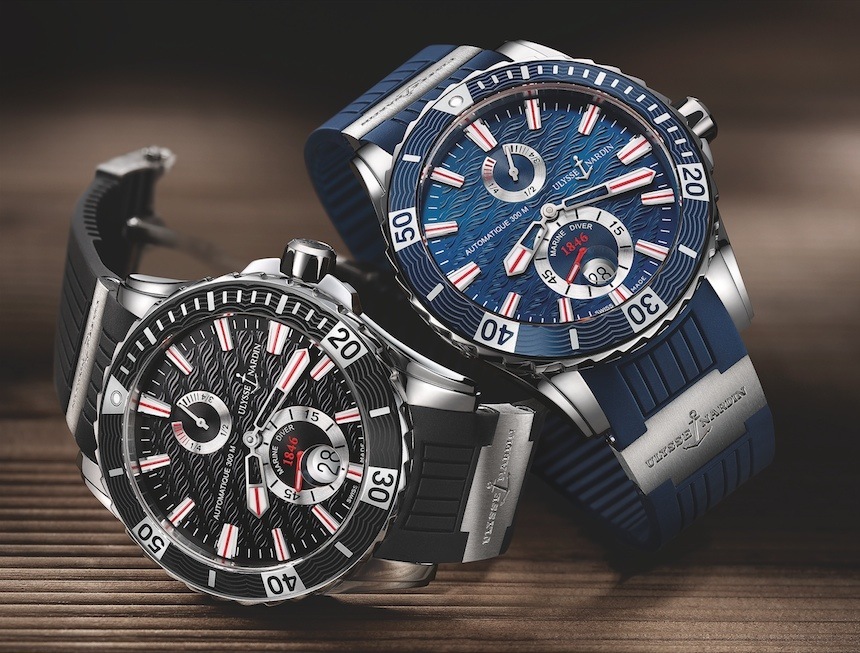 The Ulysse Nardin Marine Diver is one of the few trademark collections of the brand, packing some unique design features that have for long set this model apart from the rest. In fact, it was among the first dive watches that we recall to have a decidedly dressy and elegant flair to it, a successful experiment in mixing the prestige of a high-end brand with the cool-factor of dive watches. For 2014, Ulysse Nardin decided to refresh its Marine Diver line by focusing on some important aesthetic refinements, all the while keeping its fundamentals intact. 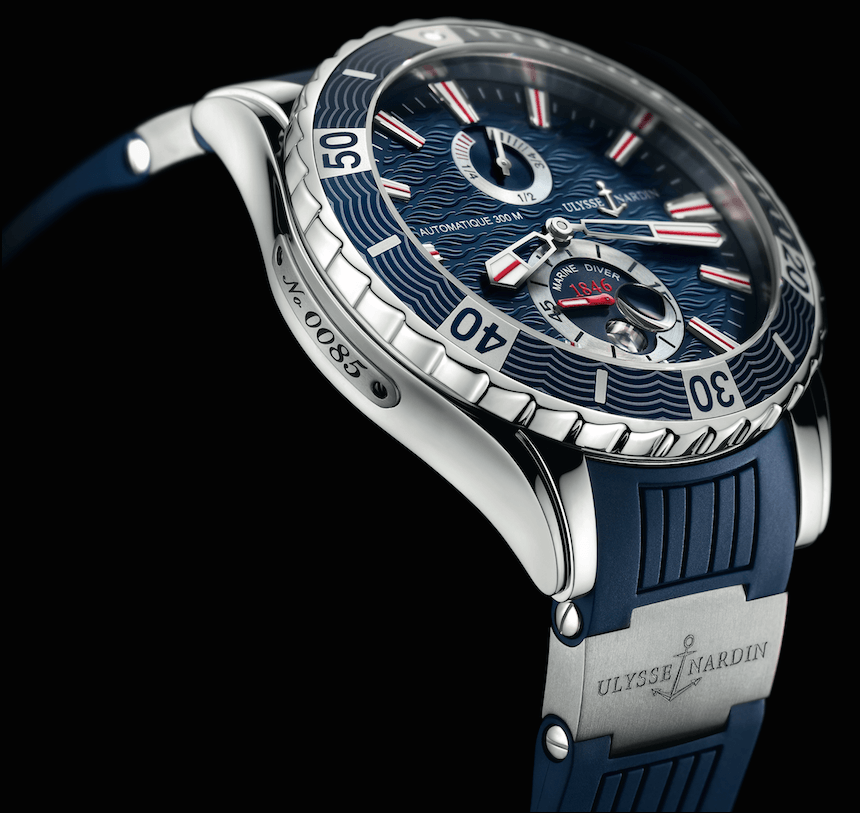 You see, despite the company’s some 170 years of history in making exceptionally accurate marine chronometers and its unique anchor logo, Ulysse Nardin is hardly one of the first names that spring to mind when we think of nautical themed Swiss brands. The reason for that is that more recently we have been overwhelmed by the array of beautiful and highly complicated – and as such, more dressy and fragile – watches which the brand has been releasing, truly sublime pieces, like the 4-Gong Sonnerie or the “Stranger” Music box watch.

With that in mind, it is easy to see why this face lift – as they like to say in the automotive industry – is most welcome news from the Le Locle-based manufacture. What is new for the Ulysse Nardin Marine Diver in 2014 is a number of aesthetic improvements, so let’s see what these are one by one. 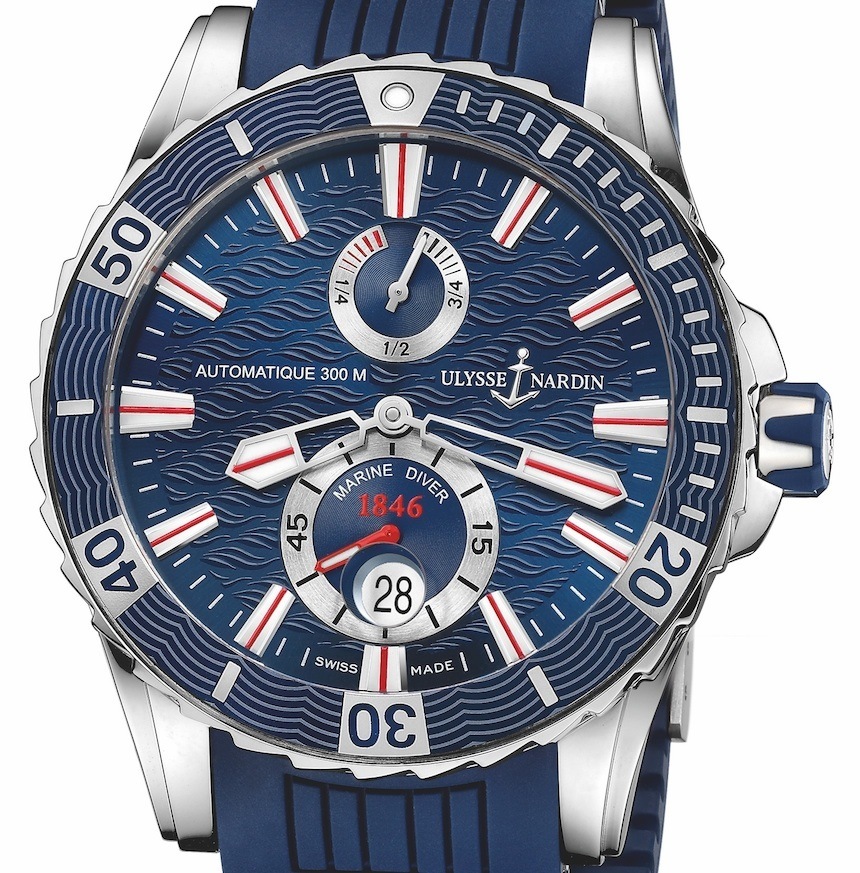 The most obvious modification was performed on the watch’s 44 millimeter wide stainless steel case. While previous models offered a more angular, dare we say “tool-like” look, the 2014 model sports a more organic appearance, thanks to a few notable changes in its construction. For one, its lugs are now flared, and those elegantly curved two-tier lugs unquestionably help to create a more refined appearance. The crown protectors follow suit as they trace the shape of the case more closely than the rather blocky ones we have been seeing on previous models. The crown is new too, so to speak, now covered in “claw-shaped” rubber for better grip and a sportier appearance.

The dial and the bezel, both available in either black or blue, feature the wave pattern, which has for long been a trademark design feature of the Ulysse Nardin Marine Diver. With that said, the bezel has been slightly modified, and now comprises framed numerals for the more important ten-minute markings, making for somewhat improved legibility. With the same goal in mind, the dial has been modified as well, now sporting some clearly visible red markings at the center of all indices as well as the hour and minute hands. Since previous Ulysse Nardin Marine Diver references had little to no issues when it came to legibility, we feel these aesthetic refinements have been performed more for the sake of updated looks, rather than for actually enhanced performance. 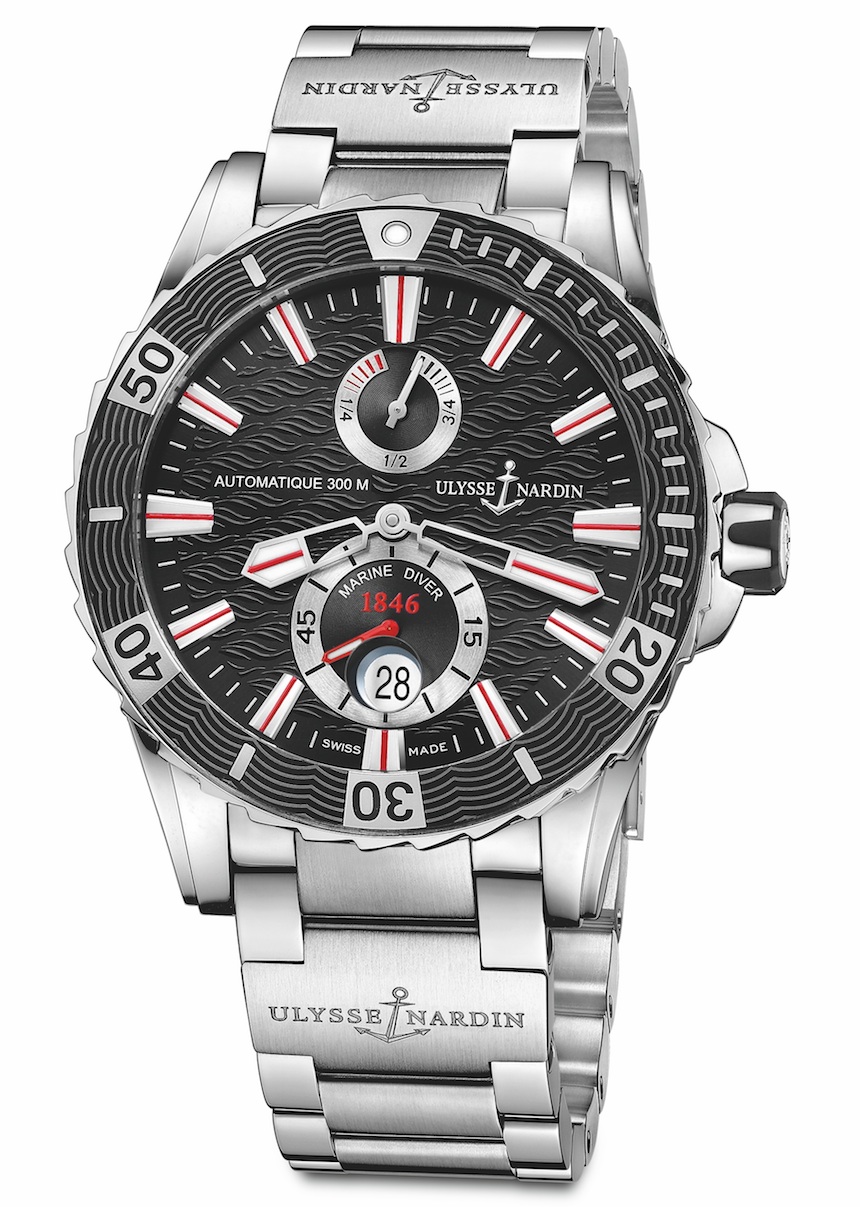 The movement inside remains the UN-26, an ETA 2892A2 which the brand has “personalized,” firstly by decorating it to the level that matches the standards – and the price point – of Ulysse Nardin, adding swirled Côtes de Genève striping, circular graining, and the custom UN rotor. As far as the more technical and practical aspects of the UN-26 are concerned, the base 2892 is further modified by the addition of the brand’s own movement module, allowing for the display of the movement’s power reserve, as well as the repositioning of the base movement’s central seconds hand into the running seconds of the subdial at the 6 o’clock position. The seemingly negligible height of this module makes the date disc, which is located on the base movement, appear rather small and difficult to read, hence a tiny cyclops is placed on the sapphire crystal for improved legibility.

In short, the new Ulysse Nardin Marine Diver offers a few, albeit certainly noticeable aesthetic modifications over its previous iterations, while it remains a potent competitor among high-end desk-divers. The Ulysse Nardin Marine Diver comes equipped with either rubber strap matching the color of the dial and bezel, or on a steel bracelet, with prices coming in at $8,500 and $9,700 respectively. ulysse-nardin.com