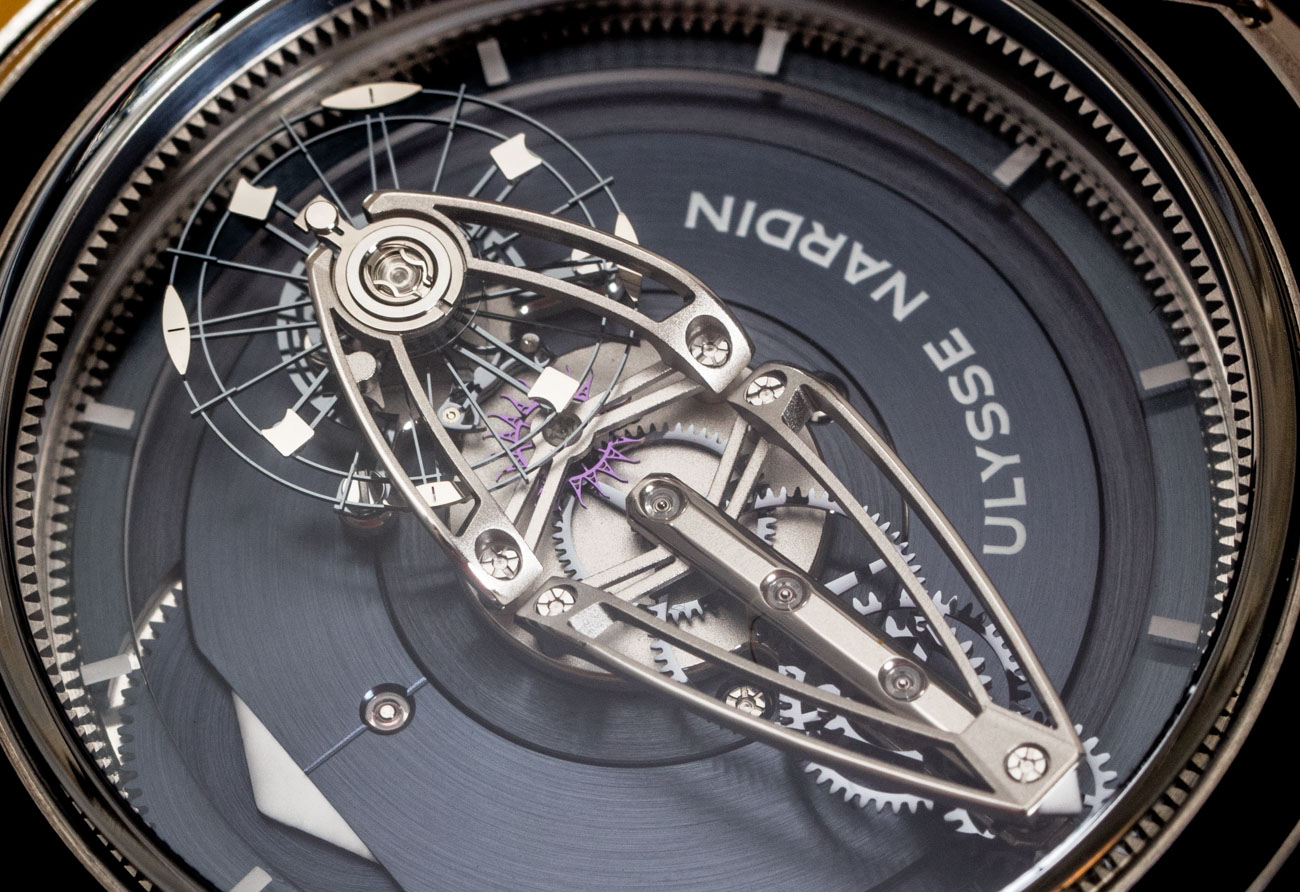 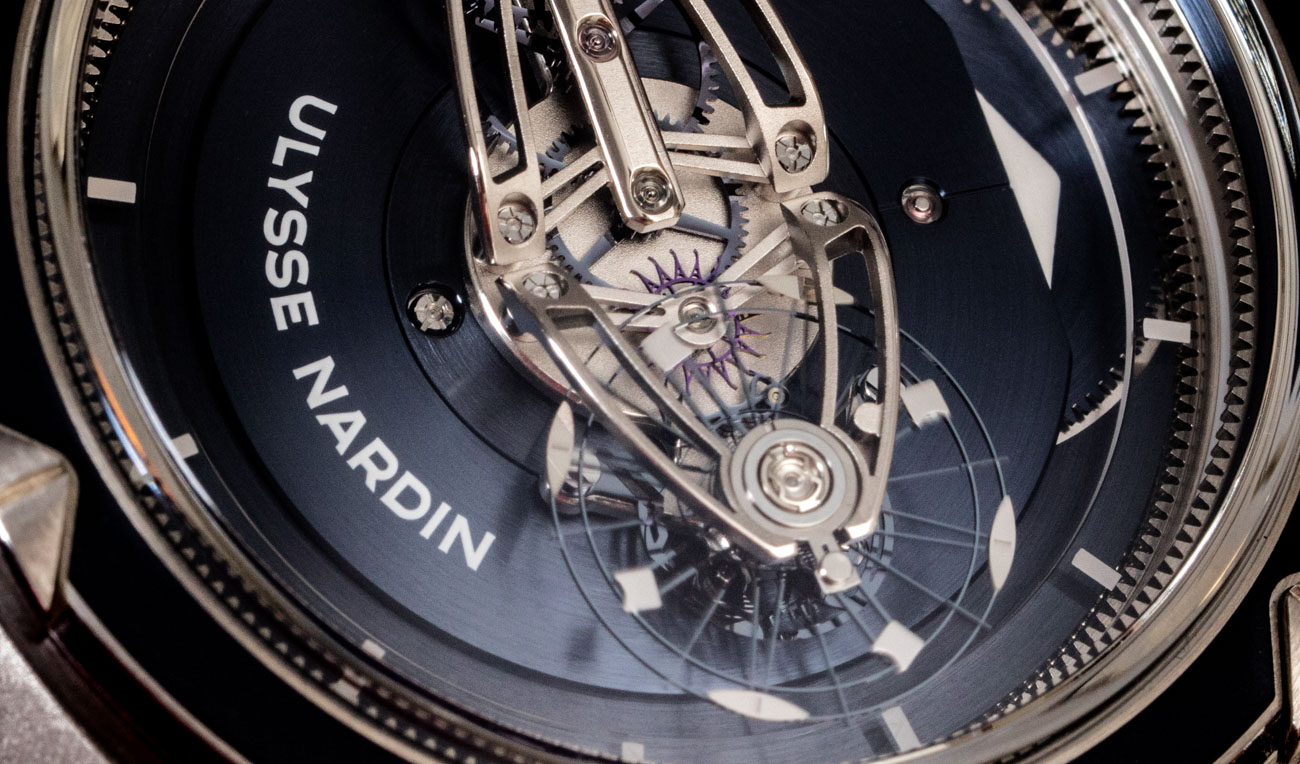 The Ulysse Nardin Freak Vision introduces a new case design, movement, and — for the first time in a Freak collection watch — automatic winding (via “the Grinder”). I spoke more about the technical novelties and overall Ulysse Nardin Freak Vision concept when introducing the collection on aBlogtoWatch here. Initially debuted as a concept in the Ulysse Nardin Freak InnoVision 2, the Grinder is probably the most technically interesting element of the Freak Vision from a functional perspective. Visible through the rear of the case, the Grinder automatic winding system uses a large monolithic silicon structure as the basis of a new high-efficiency rotor-based mechanism. But what does that mean? 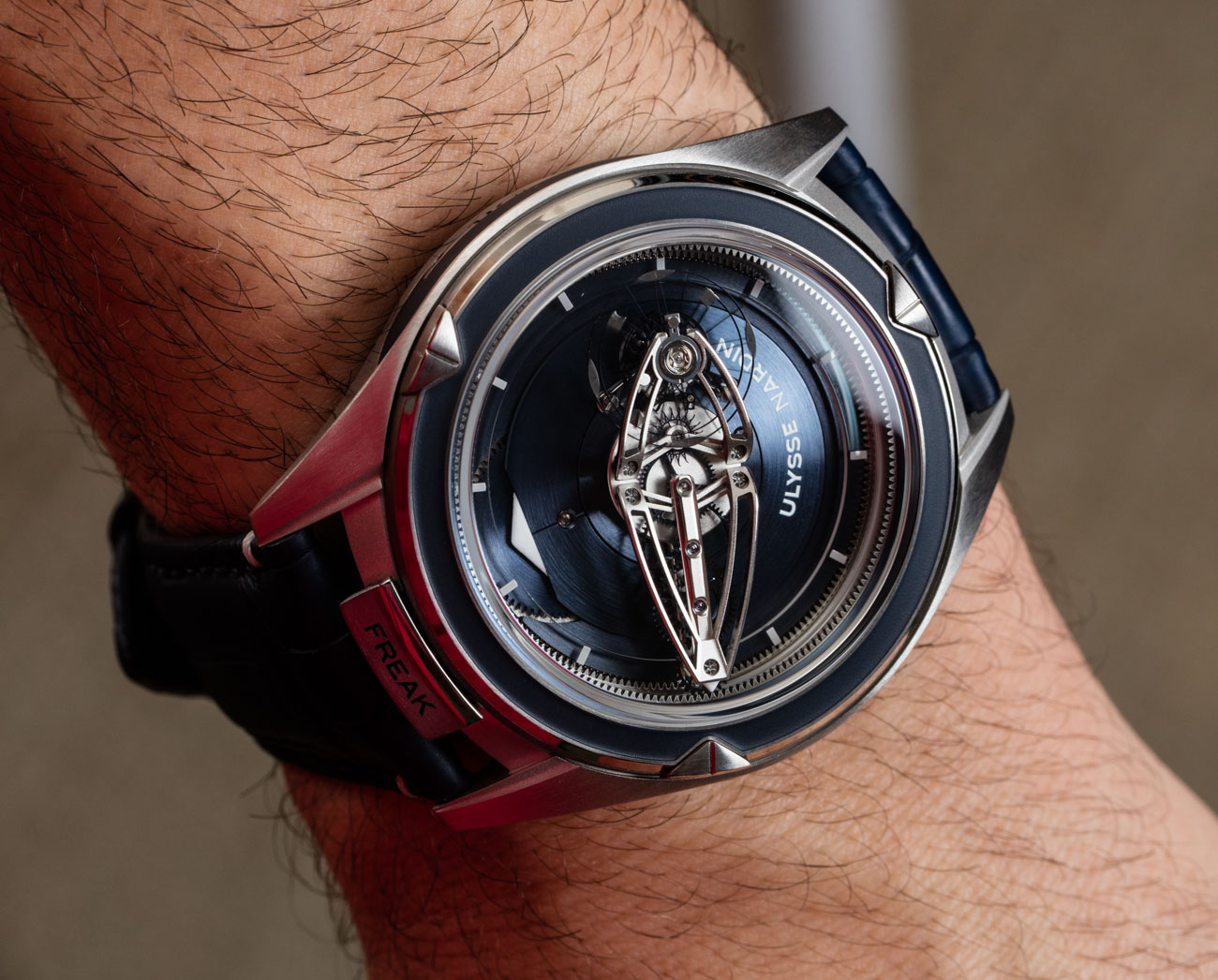 In traditional automatic winding systems, a fair amount of movement needs to happen in order for the self-winding system to produce power that feeds the mainspring (to be wound, that is). The Grinder seeks to create an automatic winding system that is able to generate power to wind the mainspring without requiring as much physical movement. A few degrees of tilt on the rotor can generate power for the mainspring. It is a sound concept and should certainly help the watch stay wound. In a sense, this a collector’s watch, and not one for sport usage, so I’m not sure if the added winding efficiency really helps solve real-world problems, but the technology is spot-on.

With 50 hours of power reserve, the in-house made Ulysse Nardin caliber UN-250 movement has less power reserve than most other existing Freak watches. The Freak Out (formerly Freak Cruiser) has seven days of power reserve versus 50 hours for other models. I think this is because the automatic Grinder winding system took up space that would have been used for a large mainspring in a manually-wound movement. Accordingly, if you look at the caseback of legacy Freak watches, you’ll see how large the mainspring watch is. 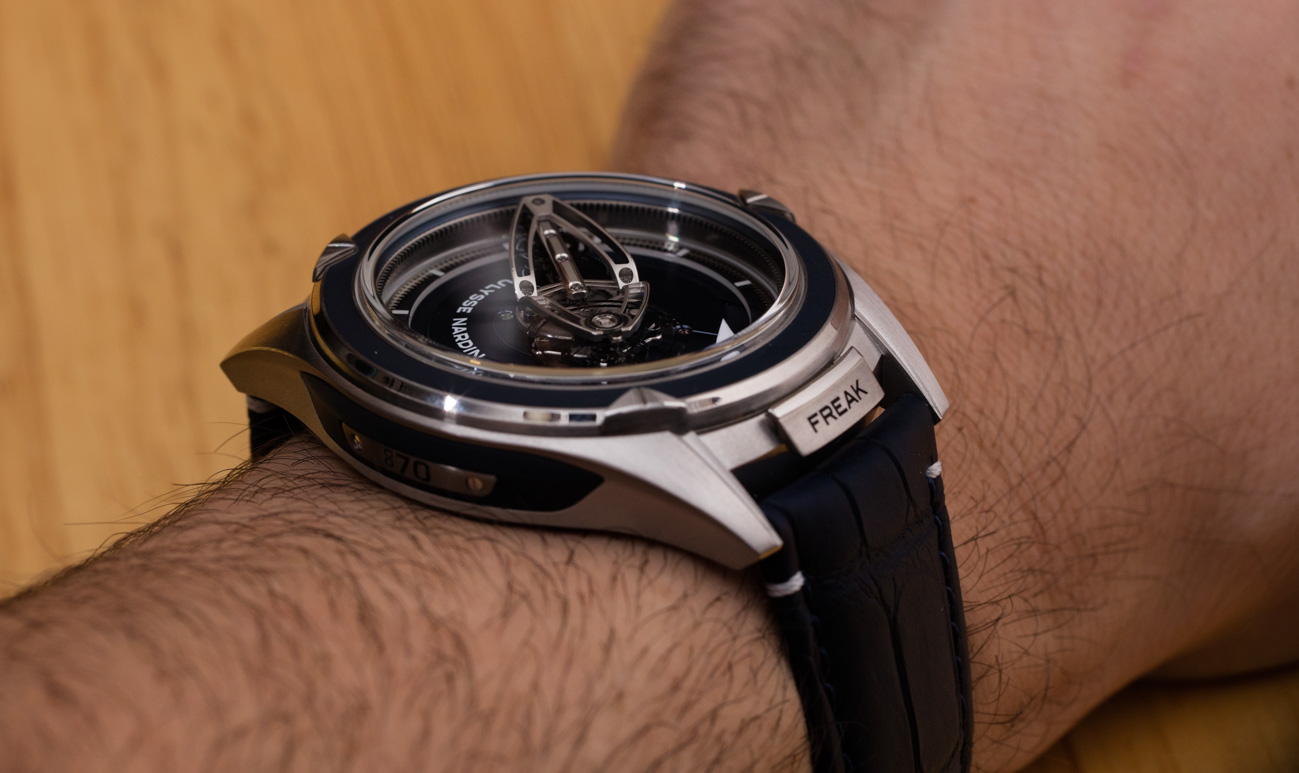 What the Freak Vision loses in power reserve duration, it makes up for in accuracy and performance over time. The second major trick employed in the Freak Vision’s UN-250 movement is a constant-force mechanism, which also (predictably) employs mechanical silicon technology. If you look closely at the spinning oscillator on the dial, under it you will see a structure that is part of the Ulysse Nardin Anchor Constant Escapement. Running at 2.5Hz, the silicon balance wheel (oscillator) combined with the Ulysse Nardin Anchor Constant Escapement is intended to produce excellent accuracy over time. It is also worth mentioning that a lot of the movement design is intended to protect the movement’s performance from shock and vibration. I don’t think this is intended as a shock-resistant watch, per se, but given the inherent sensitivity of silicon parts to shock, I believe the system is designed to prevent shock or vibration to the movement from dramatically affecting accuracy. 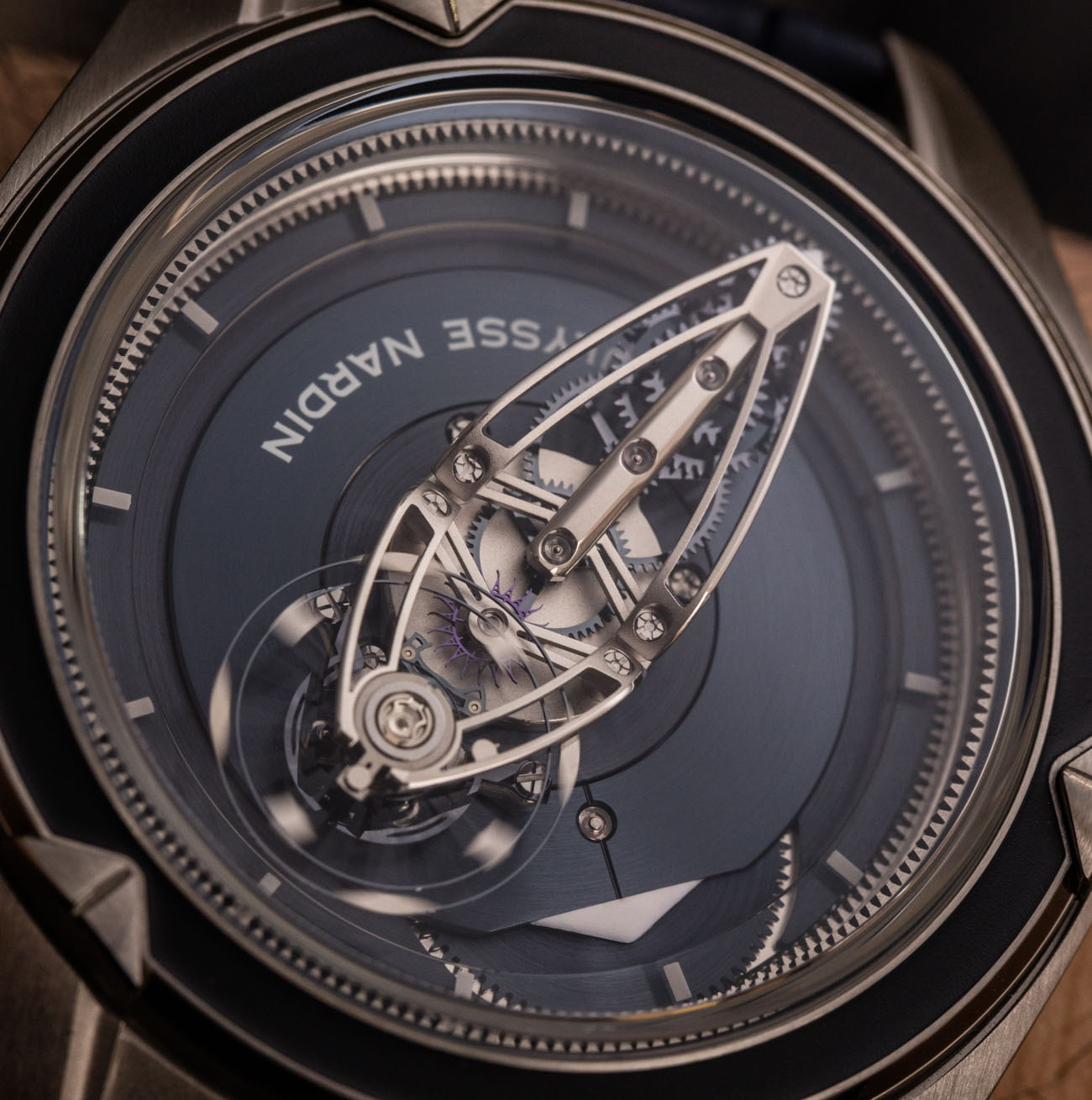 The Freak watch collection has always been about chronometric performance. When Ulysse Nardin first introduced the original Freak back in 2001, it was supposed to be a next-generation watch movement because of its heavy reliance on silicon. Perhaps no other brand compared to Ulysse Nardin has been as prolific with various types of silicon (aka “silicium,” in French) componentry. The original goal persists today: to rely on traditional horological technology but to introduce novel materials and manufacturing techniques in order to make traditional mechanical watches more accurate and reliable. Of course, compared to electronic timekeeping, mechanical timekeeping will more often than not be less accurate. Interesting exercises like the Freak collection have merit mostly to collectors, since the real-world need for slightly more accurate (and a lot more expensive) mechanical watches is uncommon, to say the least.