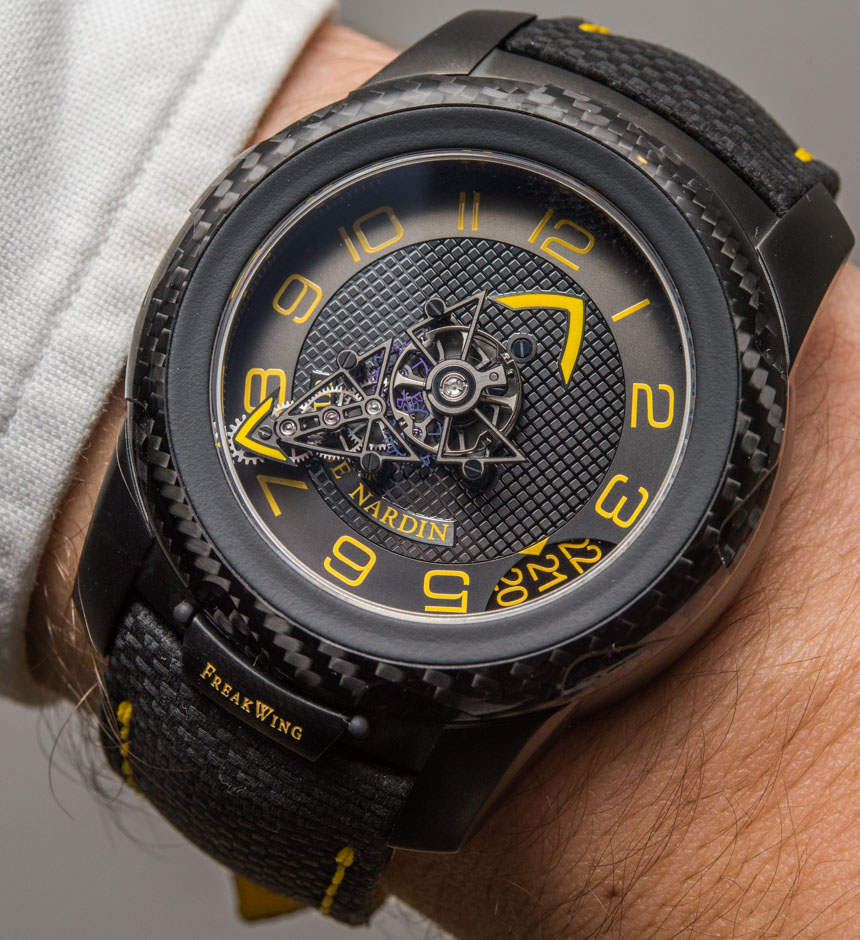 At Baselworld 2016, Ulysse Nardin predictably introduced a couple of new limited edition Freak watches. This one is perhaps one of our favorite Freak watches of all time, and it is the 35-piece set Ulysse Nardin FreakWing Artemis Racing Limited Edition in cool black and yellow “bumblebee” tones. Not personally being too connected to the world of boat racing, the Artemis Racing team collaboration is fun, but it isn’t what seals the deal for me. 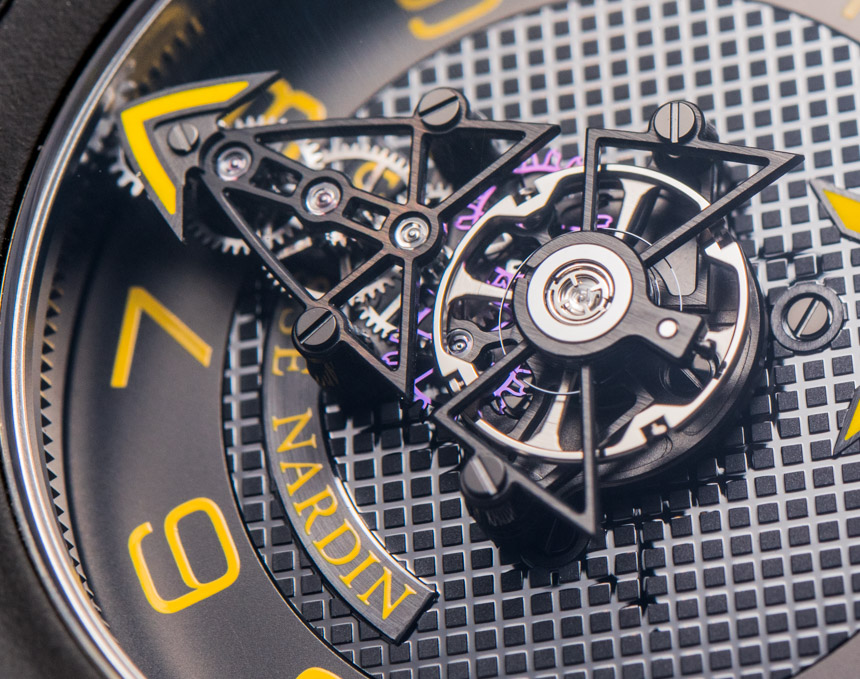 The watch is called the “FreakWing” because of the design of the movement/minute hand that is inspired by the “wing” mainsail of racing yachts. It is a subtle but nice addition to the overall design. The 45mm-wide case is produced in black DLC-coated titanium, with a black carbon fiber bezel. The textured leather strap’s surface pattern fits in nicely with both the carbon fiber bezel as well as the motif on the inner dial. 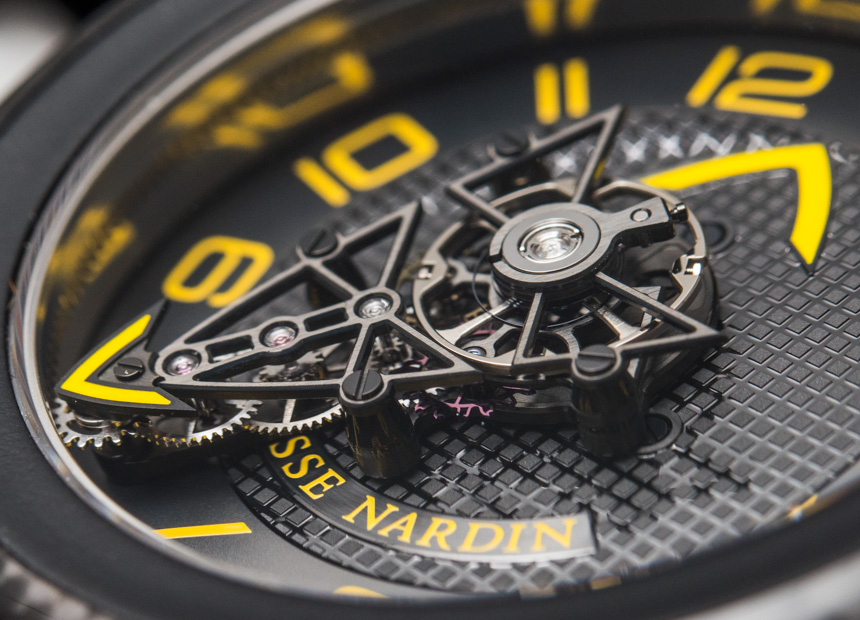 Recall that as this is a Freak watch there is no crown in the traditional sense. To adjust the time you need to flip up a small tab at the lower part of the case (where it says “FreakWing”) and then turn the bezel clockwise to set the time. Unlike other Freak watches which do not include the date, you cannot set the time forward or backwards in the UN-210 movement. Rather, turning the bezel counterclockwise allows you to adjust the date. I will also say that while I am not typically a fan of “exposed” date windows, I don’t mind the execution of the date window on the Ulysse Nardin FreakWing Artemis Racing Limited Edition. 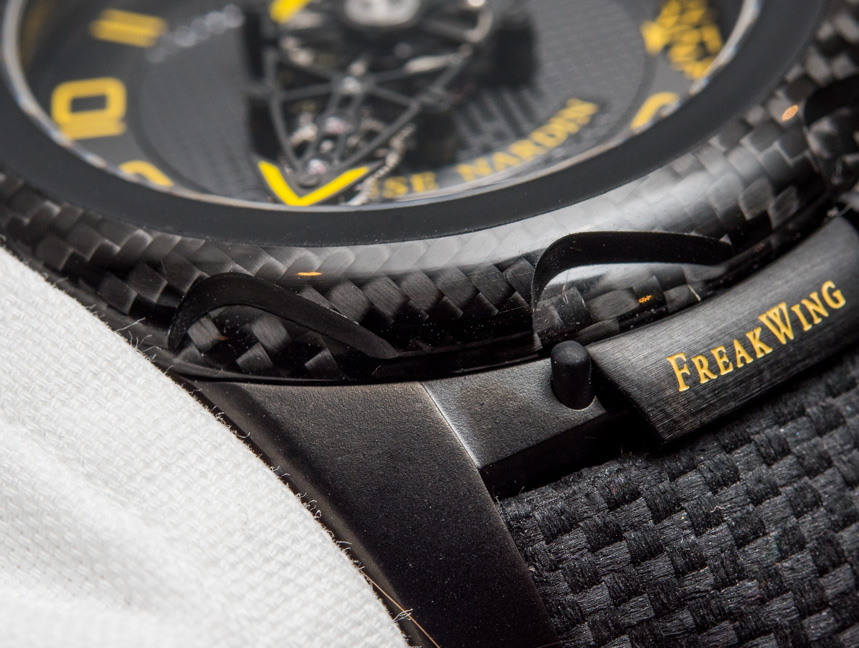 Winding the Ulysse Nardin FreakWing Artemis Racing watch is done via the rear titanium bezel around the back of the case. Winding Freak watches has never been that easy given the awkward position of your hand and the sometimes high friction of the rear bezel (thanks to the need for water resistance – 30 meters of it), but the in-house-made caliber UN-210 manually wound movement does have a power reserve of eight days – so you only need to wind the watch about once per week. The movement operates at 4Hz, and is produced primarily from silicon parts. 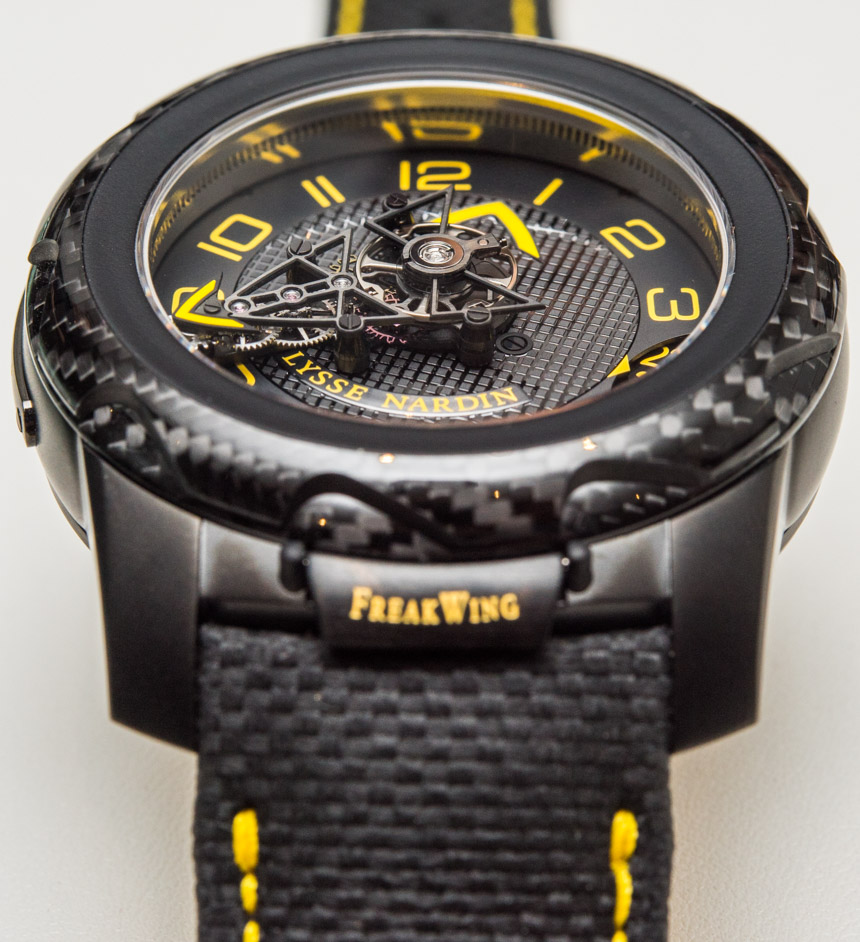 The UN-210 contains a lot of Ulysse Nardin’s attractive in-house developed technology including the UlyChoc anti-shock system (in silicon, of course) and the Dual Ulysse Escapement system (which is also in silicon). This latter system employs not one but two escapements as part of ensuring a bit more accuracy over time. Ulysse Nardin like to call all its Freak watches tourbillons, even though only a few models actually have tourbillons. They say this because the majority of the movement assembly is visible on the dial and doubles as the minute hand. As the regulation system is on this minute hand and because it rotates around the dial once each 60 minutes, the brand sometimes takes the liberty to throw in the “tourbillon” term here and there. I don’t really care whether or not it is classified as a tourbillon, but I do like it when brands are a bit less liberal with these terms as some of them (such as luxury, limited edition, innovation, exclusive, in-house, etc…) tend to lose their meaning over time if care is not taken in how they are used. 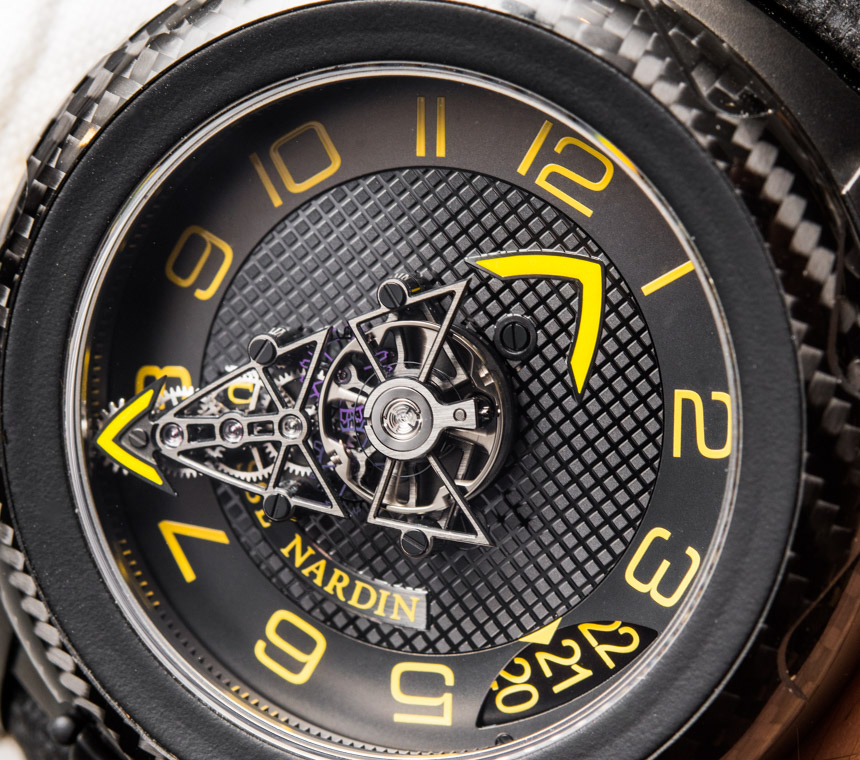 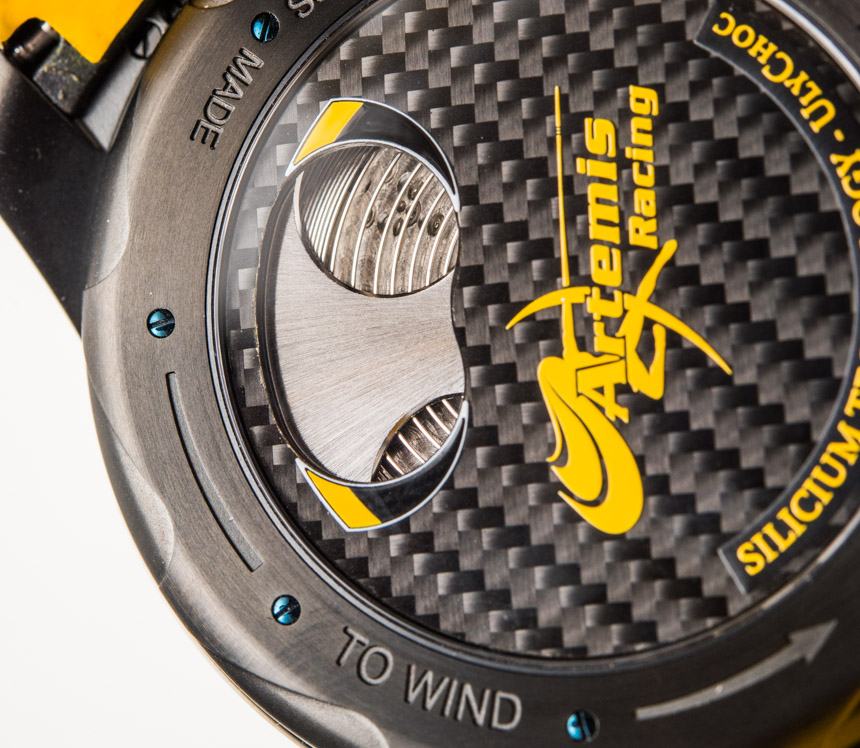 The Ulysse Nardin Freak collection remains one of our favorite avant-garde high-end watches because of its technology, meaning to the modern watch industry, operation and design, as well as its defiance of traditional norms. There is just so much meaning packed in the concept, and I truly hope to own at least one someday. That isn’t likely to be this handsome and sporty black and yellow Ulysse Nardin FreakWing Artemis Racing Limited Edition as the 35 pieces will be spoken for very soon (if they are not already). 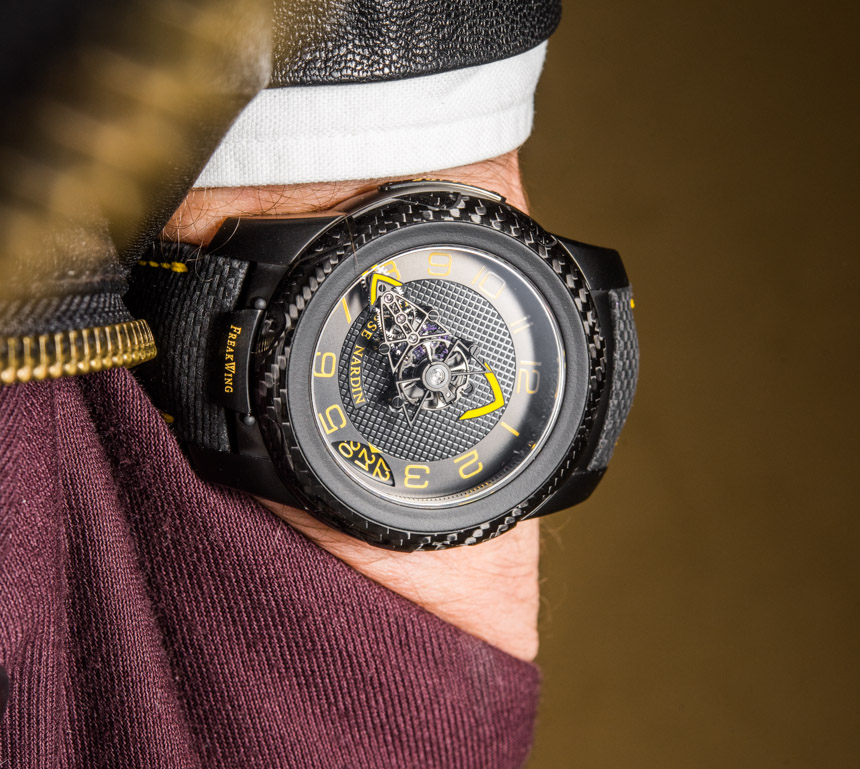 By the way, that number comes from the fact that the upcoming America’s Cup race, in which the Artemis Racing team participates, will have its 35th occurrence (even though the event itself is from the mid-19th century). On the rear of the case is the Artemis Racing team logo, more carbon fiber, and a view into the large mainspring barrel that acts as a simple power reserve indicator (by allowing one to see how tightly wound the spring is). Price for this reference 2103-138/CF-ARTEMIS Ulysse Nardin FreakWing Artemis Racing Limited Edition watch is $78,000. ulysse-nardin.com