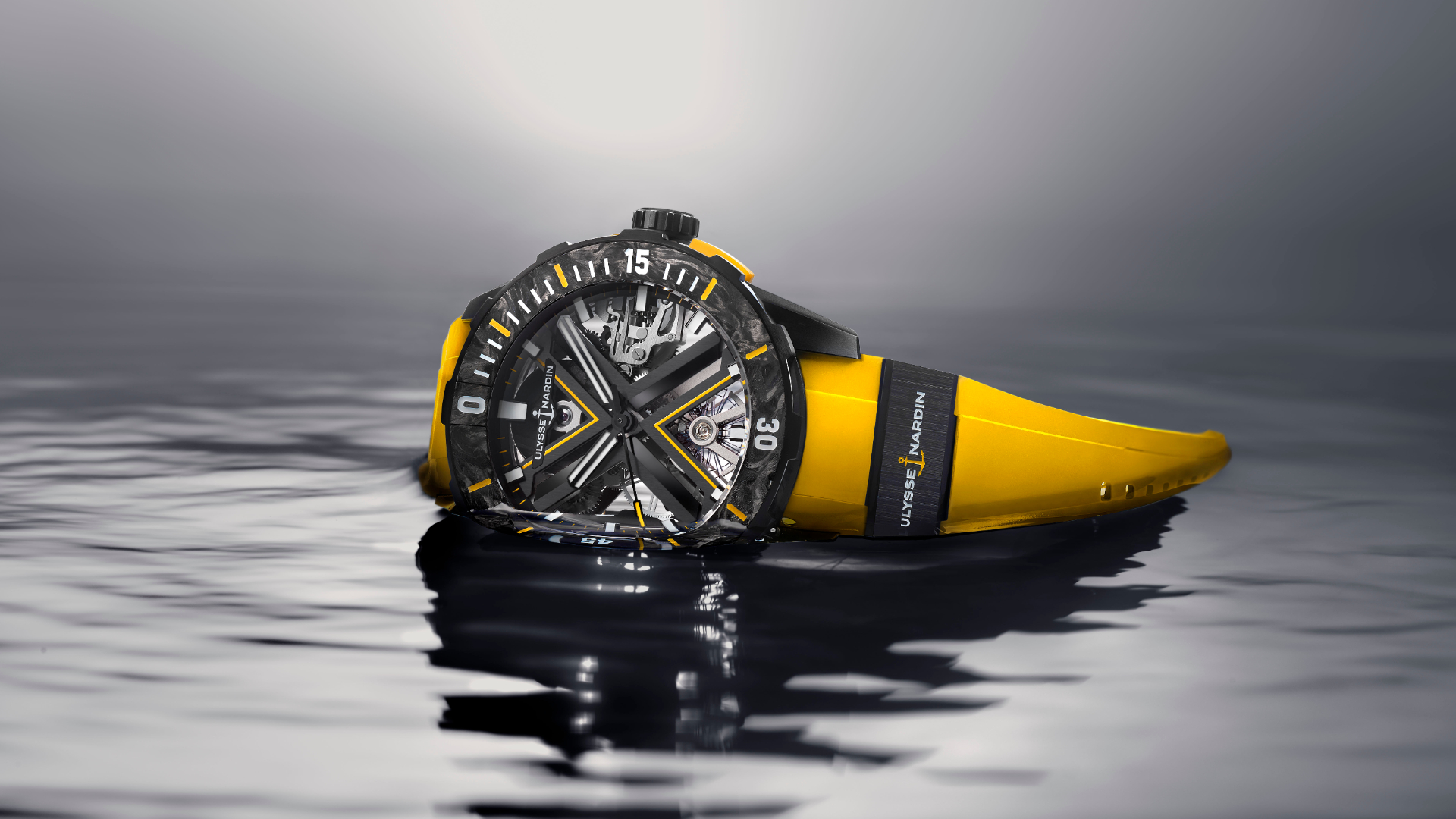 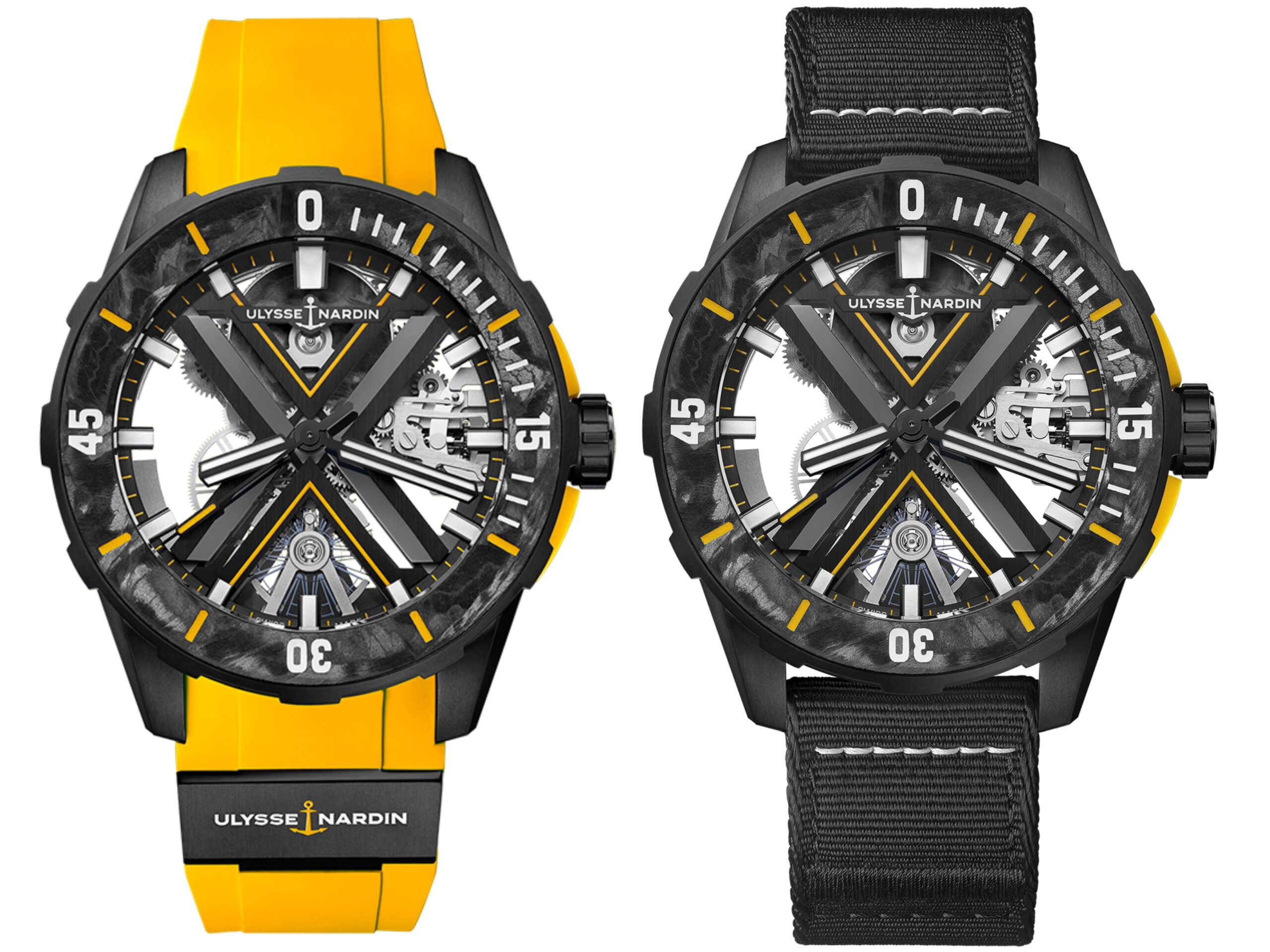 Last year, Ulysse Nardin debuted its Diver X Skeleton, which brought the bold skeletonized design of the Blast collection to the brand’s lineup of dive watches and paired it with a lightweight and highly-durable Carbonium bezel. The original model featured a stainless steel case with a blue and orange color profile, and all 175 pieces of the limited-edition watch rapidly sold out immediately following its launch. This year, Ulysse Nardin is bringing back its popular skeletonized diver in the form of the Diver X Skeleton Black, which largely follows the same core design of the inaugural model from 2021, except for the fact that it now appears entirely in black and yellow and features a lightweight titanium case with a black Carbonium bezel. 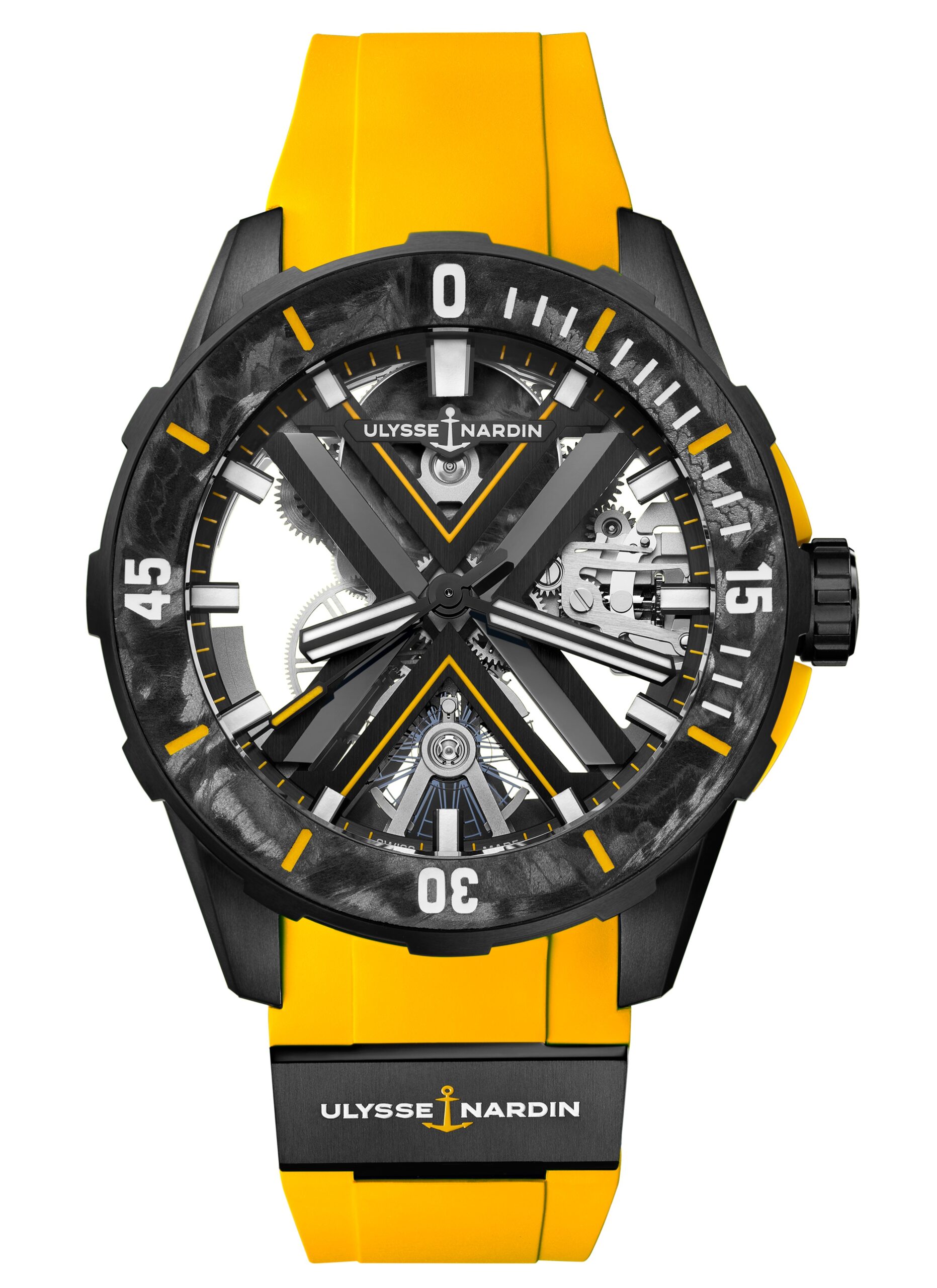 The 44mm case of the Ulysse Nardin Diver X Skeleton Black measures 16mm thick and is crafted from sandblasted and satin-finished titanium, which is then given a jet black DLC finish. The choice of titanium for the new model promises a significantly lighter construction compared to the original Diver X Skeleton watch from 2021, which used a blue PVD-coated stainless steel case. Sitting on top of the case is a domed sapphire crystal surrounded by a concave unidirectional rotating timing bezel that is fitted with a black Carbonium insert. Originally developed for the aerospace industry and used in the production of the wings and fuselage of certain contemporary aircraft, Carbonium is an extremely lightweight and durable type of carbon-fiber composite, which has a 40% lower environmental impact than other types of carbon-based material. A large sapphire window occupies the majority of the Diver X Skeleton Black’s screw-on titanium caseback, which helps provide it with a dive-ready 200 meters of water resistance. 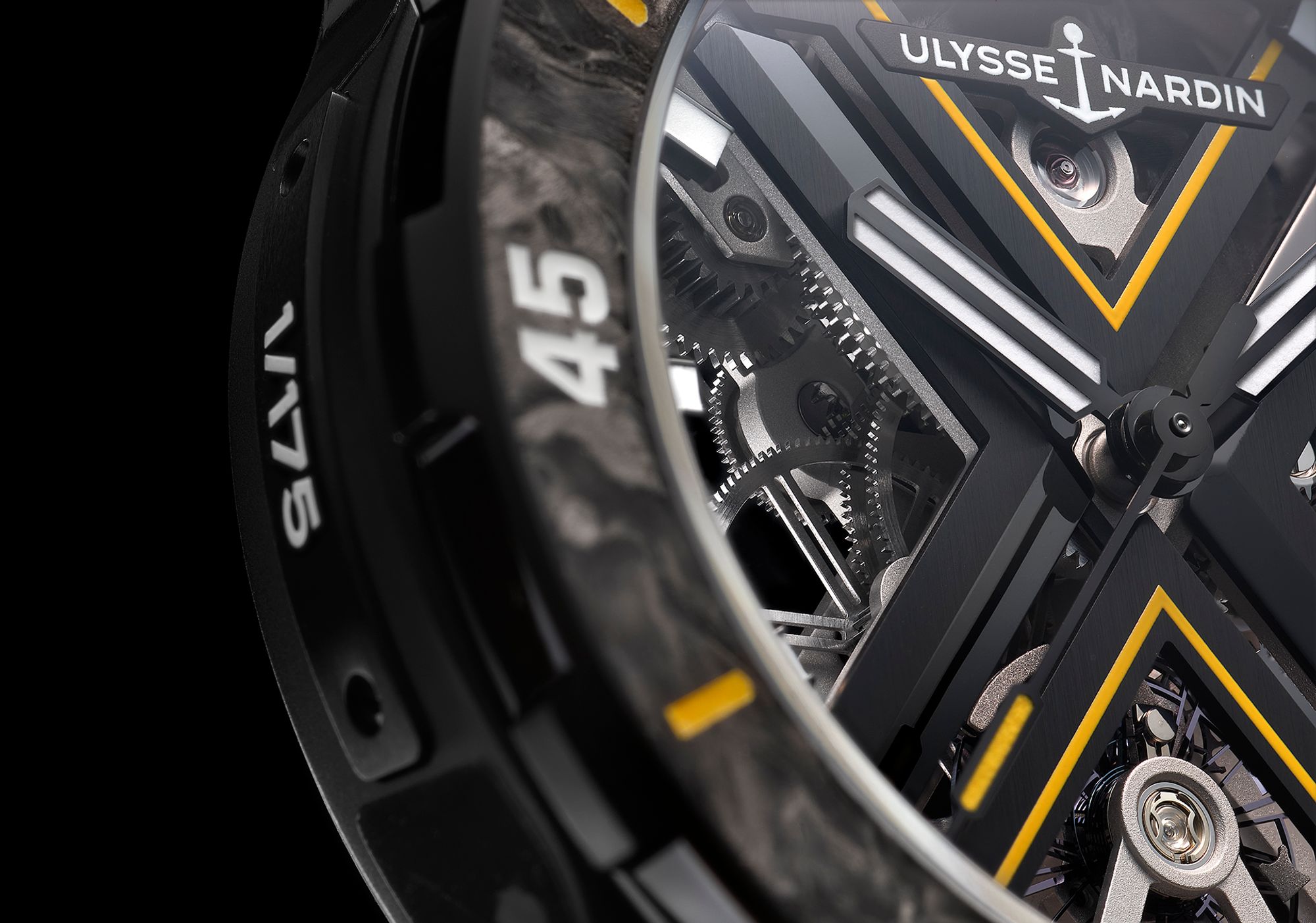 Just like the original Diver X Skeleton watch, the “dial” of the new Ulysse Nardin Diver X Skeleton Black is essentially a large “X” with virtually everything else carved away to reveal its highly skeletonized movement. The dial itself features a black PVD finish with bright yellow accents, and it includes a black chapter ring that has the hour markers for the watch attached along the outer edges, giving them the appearance that they are floating above the rest of the dial and the movement’s skeletonized surfaces. Just as you would expect from any model that claims to be a dive watch, the hands and hour markers on the Ulysse Nardin Diver X Skeleton Black are finished with Super-LumiNova for improved visibility in dark conditions, and black Carbonium is used again for the cover the of the mainspring barrel, which is fully visible through the window in the dial’s surface at 12 o’clock. 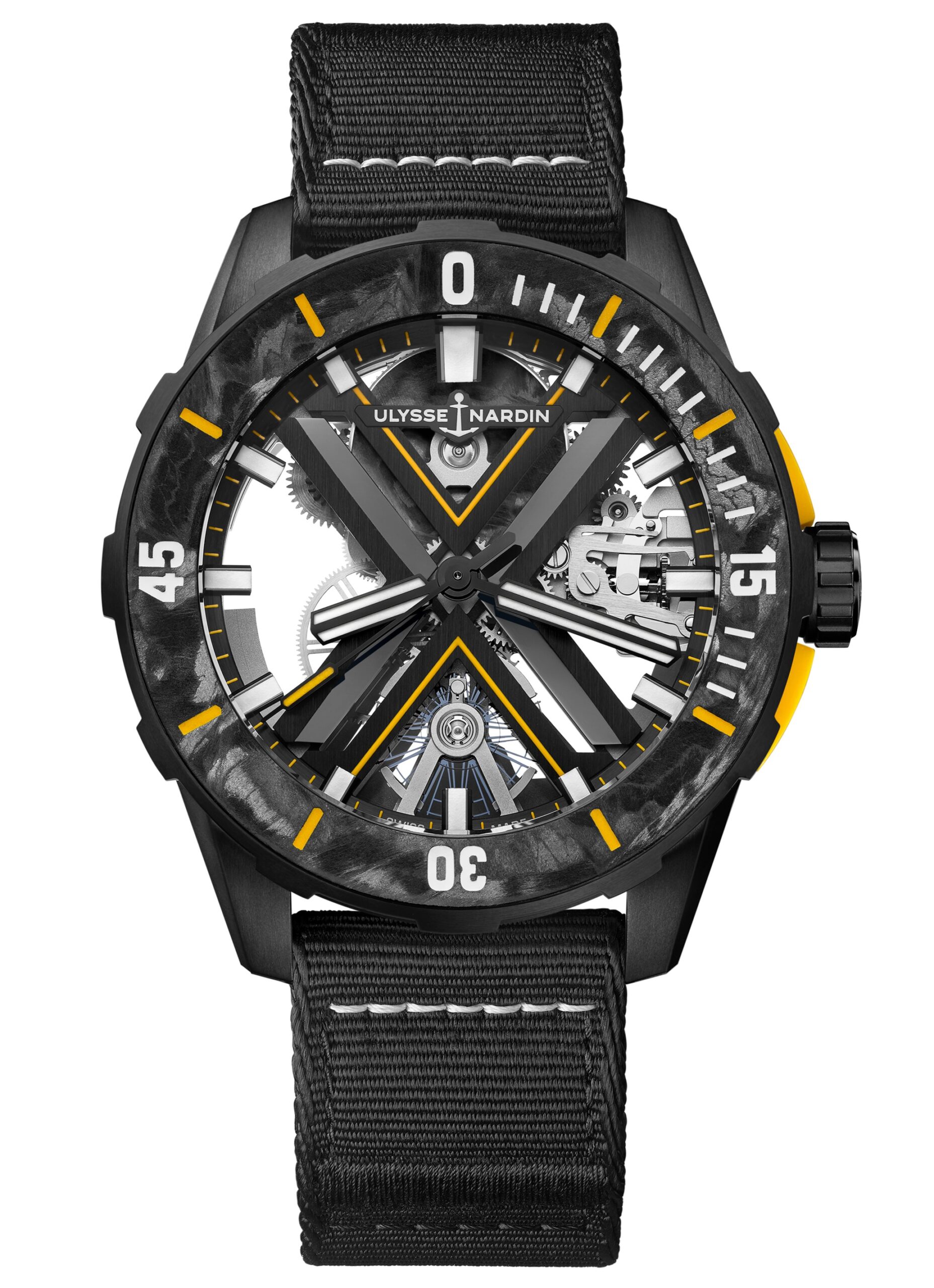 Powering the Ulysse Nardin Diver X Skeleton Black is the brand’s in-house UN-372 automatic movement, which is a modified version of the UN-371 that has been updated to feature an X-shaped oscillating weight to echo the design found on the dial. Consisting of 171 components, the UN-372 runs at a frequency of 21,600vph, and it features an escape wheel, anchor, and balance spring that are all crafted from Silicium, along with offering users an ample 96-hour power reserve. The Ulysse Nardin Diver X Skeleton Black comes with both a yellow rubber strap and a black fabric R-strap that is constructed from upcycled polyamide from fishing nets that have been removed from the ocean. 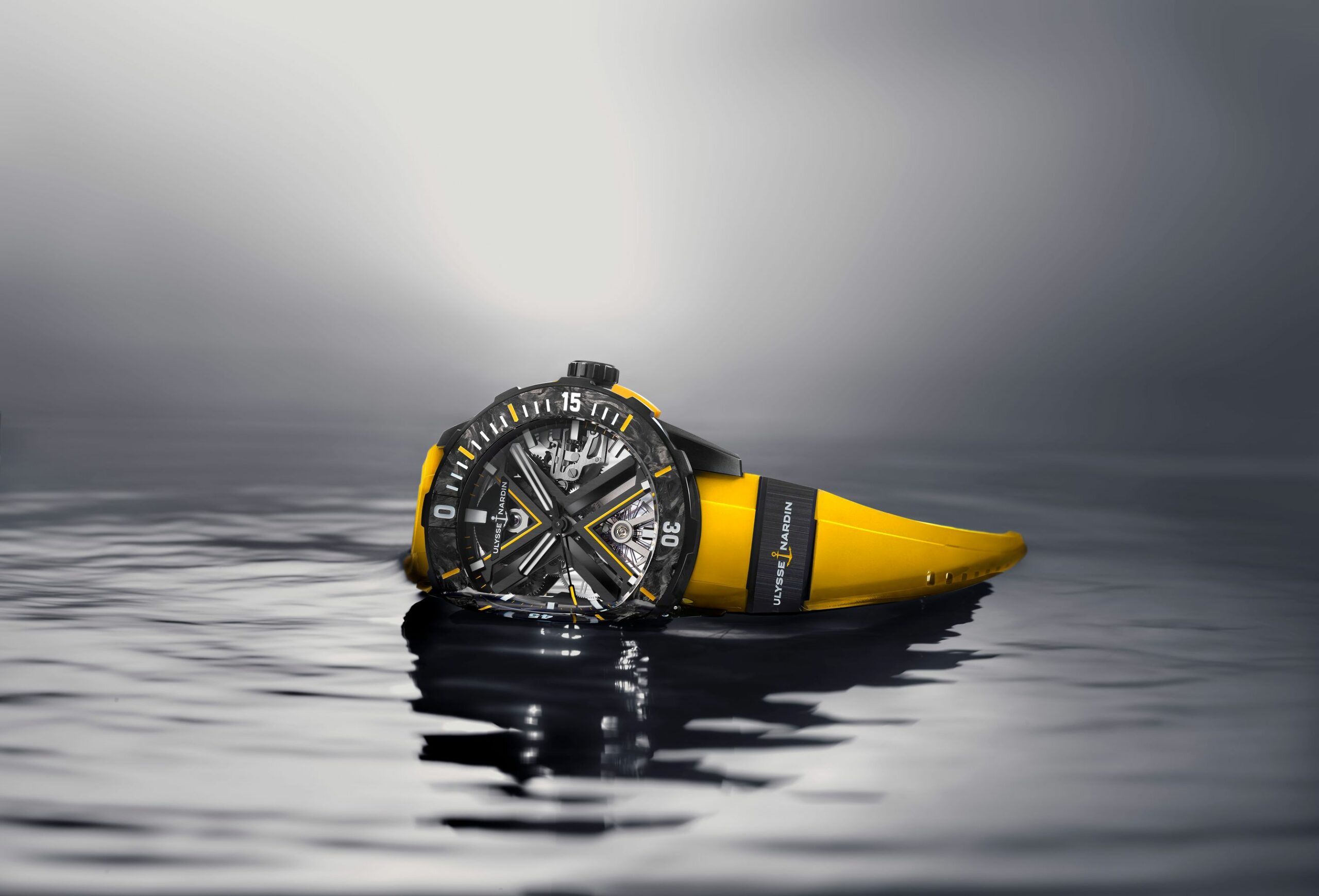 The Ulysse Nardin Diver X Skeleton Black represents the continuation of the brand’s skeletonized dive watch that first debuted last year. While its core design will be familiar to fans of the original blue and orange model, its black and yellow color profile combined with its lightweight titanium construction results in a watch that both looks and feels significantly different from the previous limited edition version that was unveiled last year. The Ulysse Nardin Diver X Skeleton Black will be accompanied by an official retail price of $25,800 USD and just like the original model from 2021, production will be limited to 175 examples worldwide. For more information, please visit the official Ulysse Nardin website.