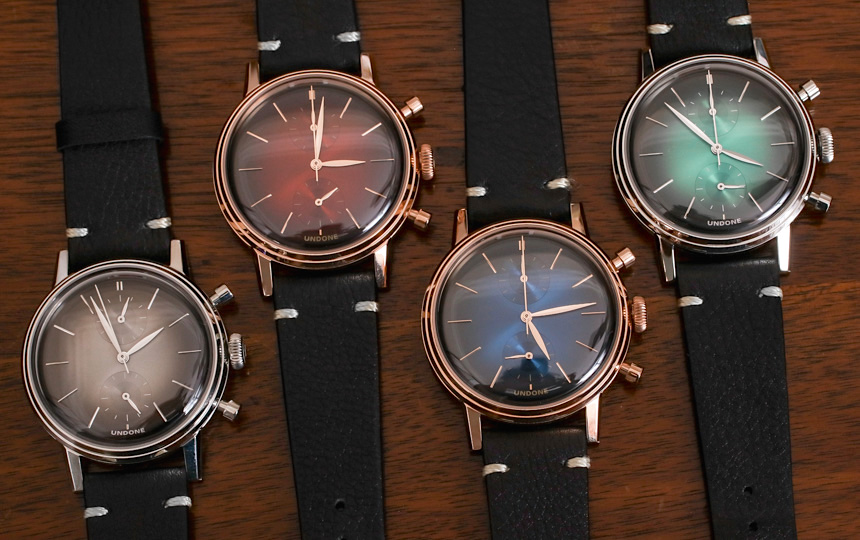 Take it from me that Hong Kong-based watchmaker Undone feels that they have accomplished a great deal with the new Undone Mystique collection that debuts with four models. For them, the achievement is in being able to offer an “artisan dial” in a watch that costs around $300. In fact, similar dials on Swiss Made watches likely cost the brands at wholesale about the same amount of money per dial. I’m really not exaggerating, and if you are familiar with what Swiss suppliers charge brands for parts, you’ll know exactly what I am talking about.

In essence, the Undone Mystique is the Undone Urban Vintage Chronograph (aBlogtoWatch review here) with a different dial. That dial comes in four colors, and is produced via a complex multi-step process that results in an elegant gradient pattern that is often called a smoked or fumé dial. Undone isn’t shy about saying that similar dials on watches from the Swiss brand H. Moser & Cie. helped inspire them, although such dial styles go back decades. Undone is correct that H. Moser & Cie. is asserting the fashionability of such watches for today’s hip watch lover, but clearly not everyone has the budget to spend tens of thousand of dollars on one. Smoked dials such as this are also popular on high-end Swiss watches from Piaget, as well as German Glashutte Original. Seiko in Japan also produces a limited quantity of smoked-dial watches, which are probably the best equivalents in terms of price as the Undone Mystique timepiece models. 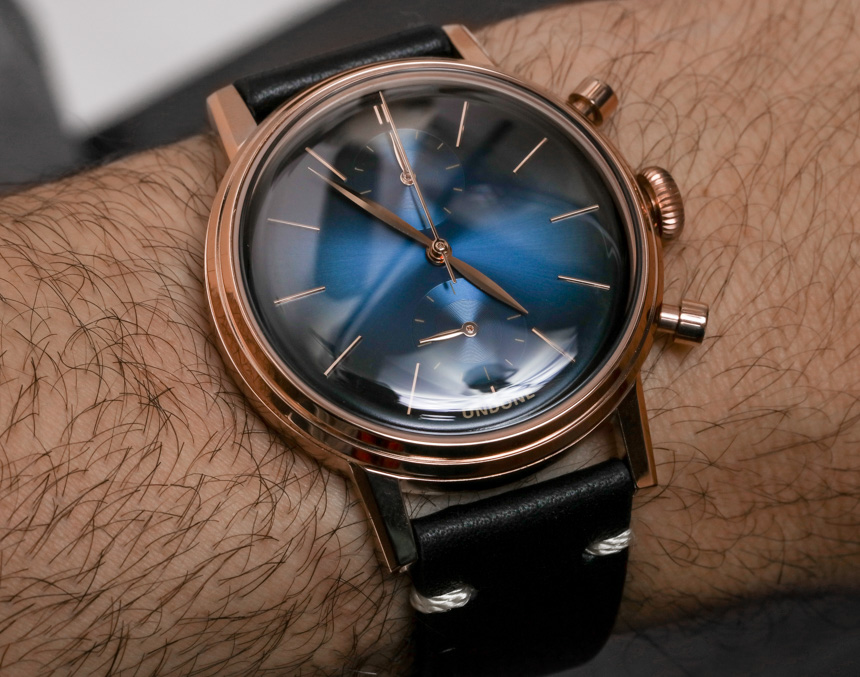 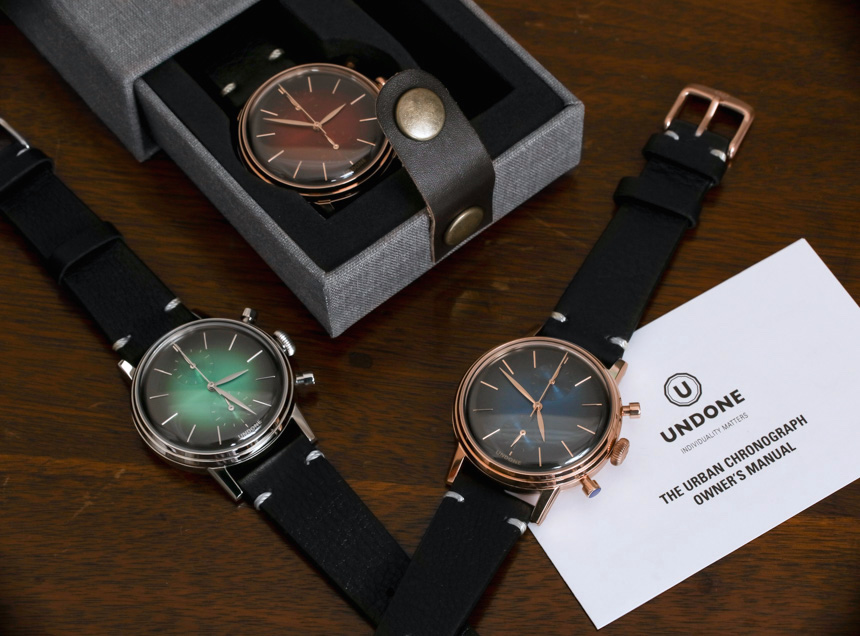 The Mystique dials, which are given lofty names such as Eclipse (gray), Mercury (blue), Mars (red), and Neptune (green), are surprisingly high-end in feel for their price. If you are the type of person who is looking for watches that look more expensive than they actually are (no shame, there are plenty of us out there), then I think the Undone Mystique is something to seriously consider. 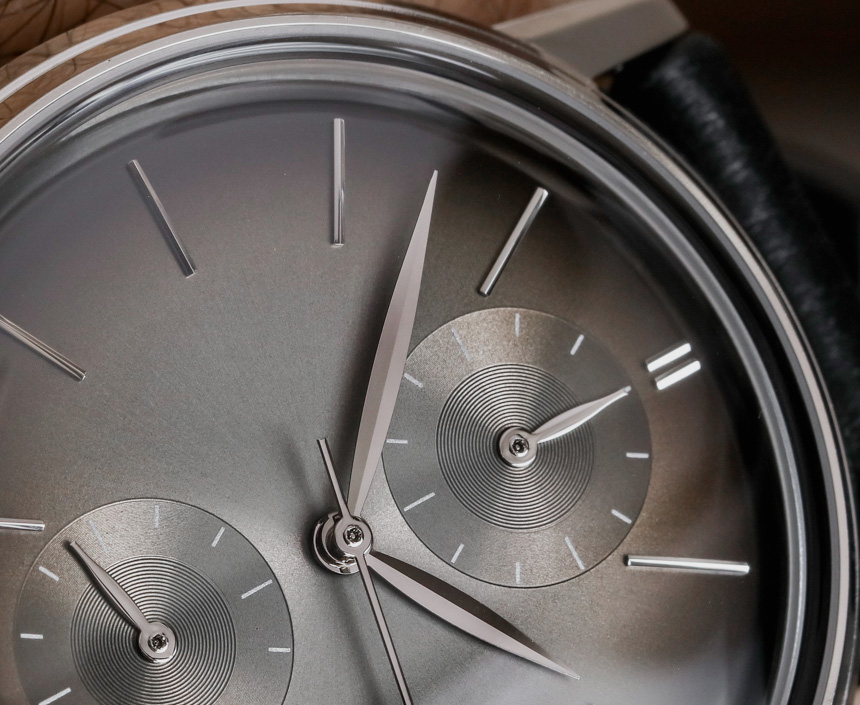 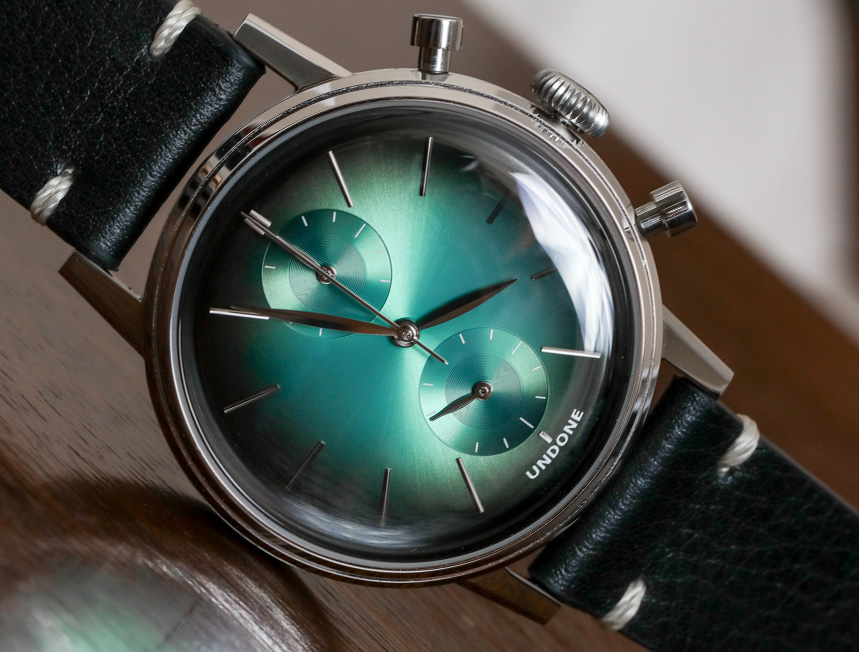 The first question, are you a smoked dial kind of person? Such dials were seemingly more popular in the 1960s and certainly into the 1970s. In the 1990s and into the 2000s, we started to see some rather low quality gradient dials on fashion watches. What made them low quality? For the most part from what I can recall, it is because they were simply printed with a glossy gradient pattern, as opposed to being actually painted using the technique which allows them to look their best. Anyhow, it simply isn’t the case that all gradient dial watches look nice, as most of them actually look quite ugly. When it is done well, however, the visual appearance is remarkably eye-catching. 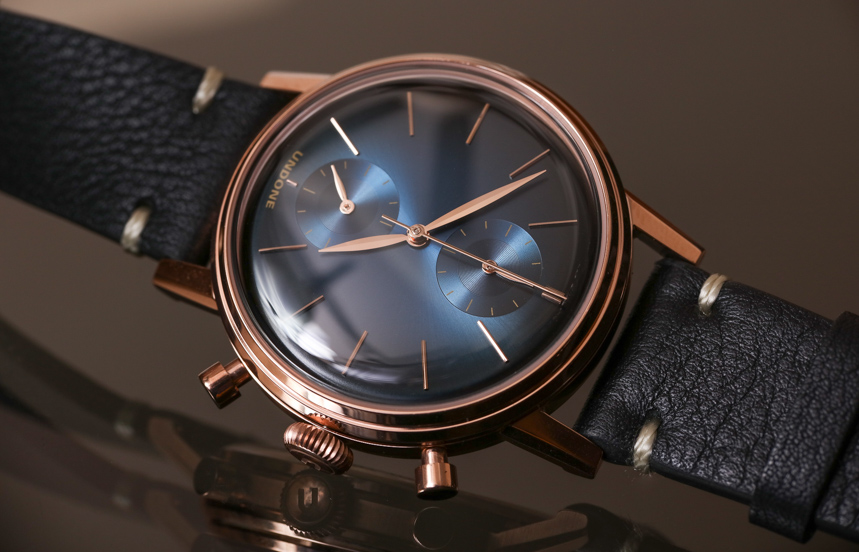 I suppose that is the biggest compliment to the Undone Mystique. Not only do their smoked dials enjoy the “right” production technique, but also that they simply look good as a result. Put one of them on and just glance at your watch in a mirror, and I think you’ll be impressed at how flattering they can be. I’ll be honest that for the most part, I am not someone who is overly interested in smoked dials. With that said, when the dial looks right, and is part of an overall decent watch, I think there is a place for such dials in most all watch collections – just not always at many thousands of dollars (enter Undone). 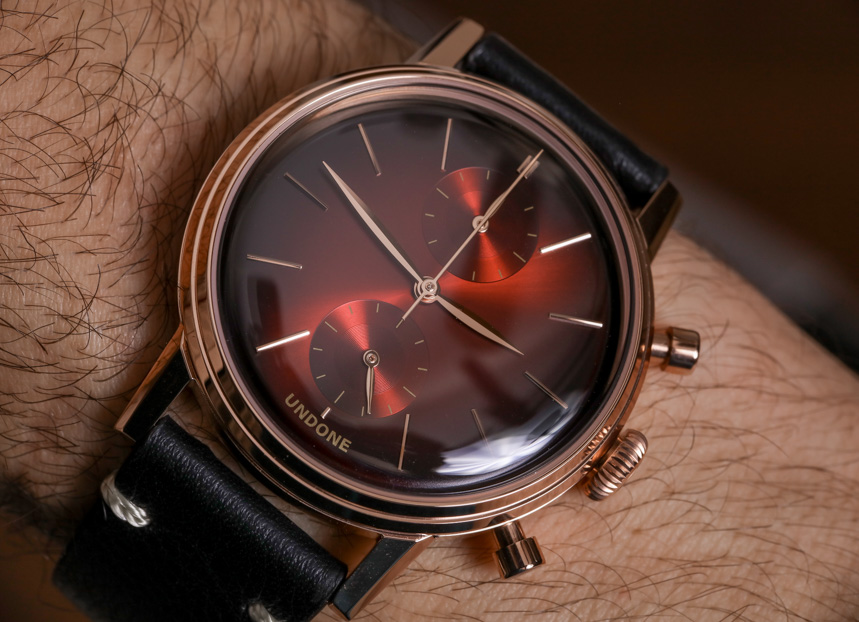 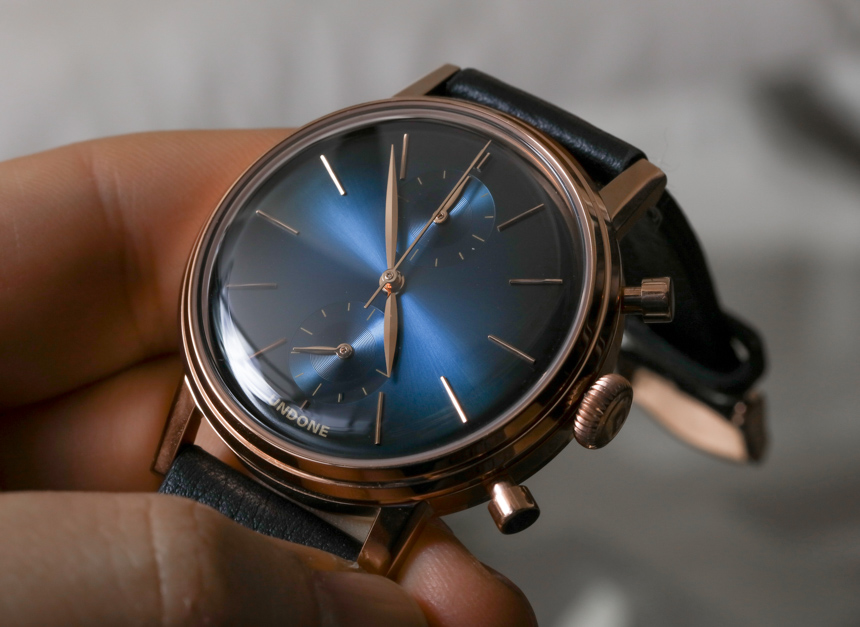 Undone communicated to me that the dials are produced by a factory more known for producing guitars in China. The bodies of some guitars are given a similar decorative gradient paint job, which is the same technique used for the dial. Finding such a supplier was crucial in being able to make these dials available for a well under $100 premium (with an extra strap) over a standard Undone Urban Vintage Chronograph watch. 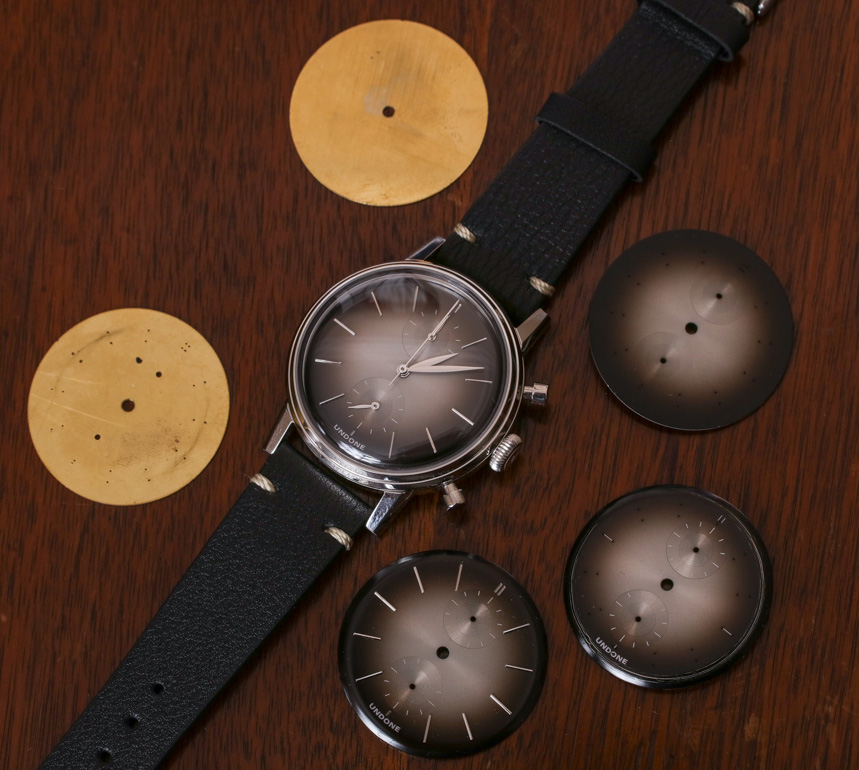 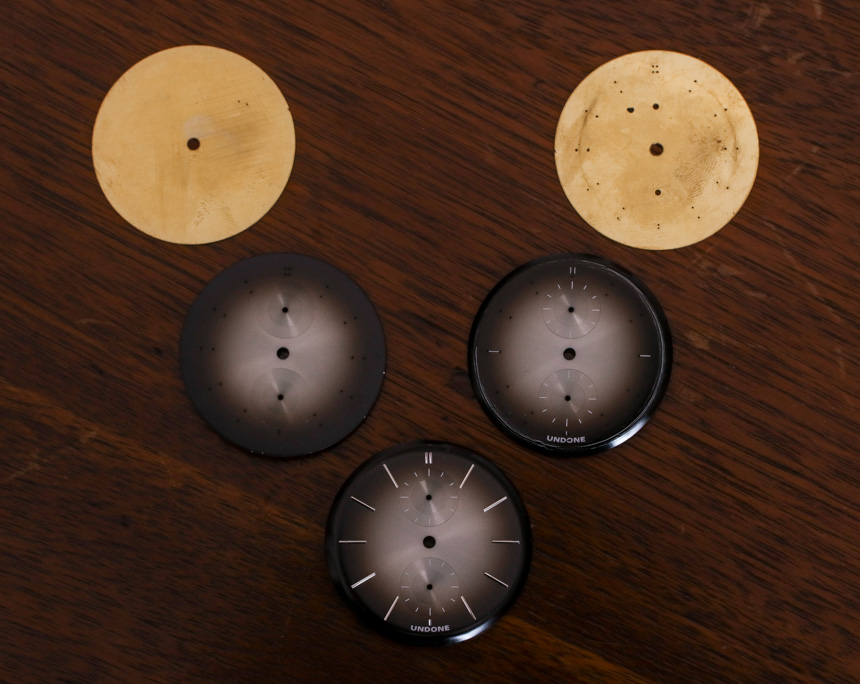 As you can see in the pictures, Undone shared some samples of the Mystique dial in five different phases of production. You can see how it begins from a brass plate, which is then stamped for holes where the indexes will go, carefully applied with the sunburst-style gradient dial painting, pad printed with some of the indicators, and then the applied hour markers are added. This technique is more or less the same as is done in higher-end Swiss watches, and Undone seems to feel compelled to remind collectors just how much more they are paying for Swiss Made. 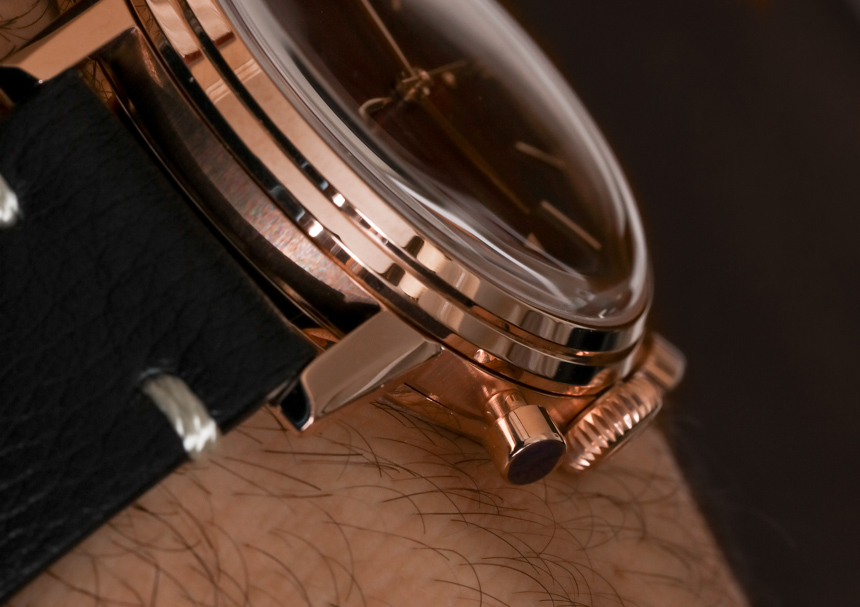 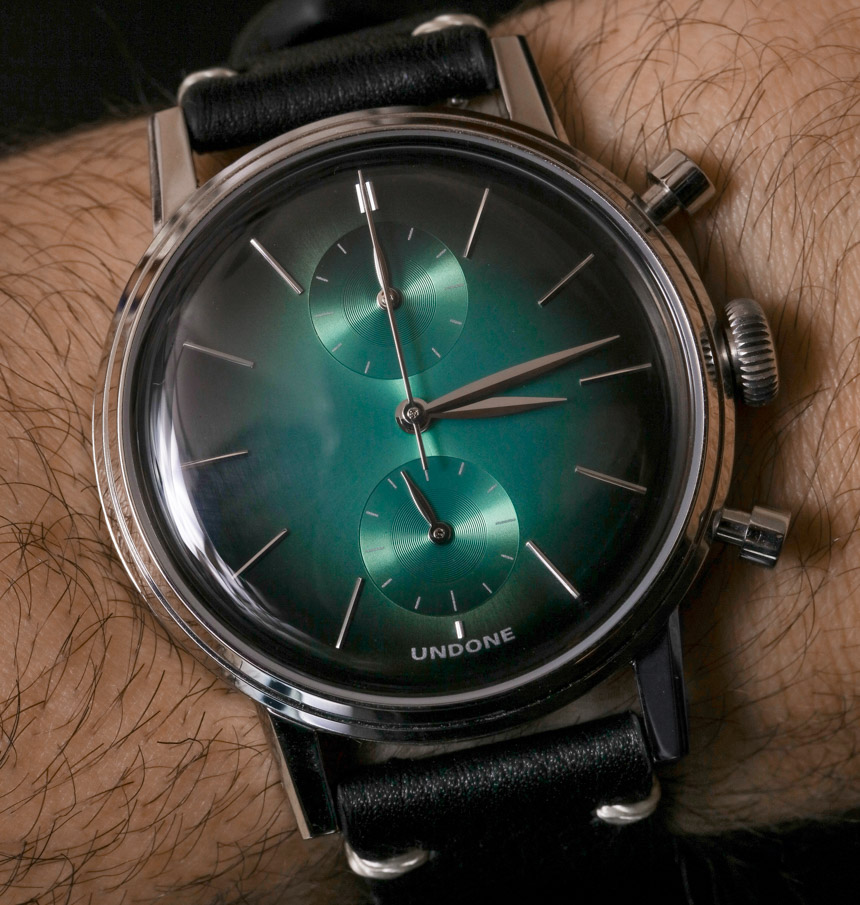 I actually want to briefly comment on my above statement for a moment. While I am not a fan of spending too much, I do have some sympathy for Swiss Made pricing (despite the prices regularly making me feel like a pauper). First of all, items in Switzerland simply cost a lot more to produce than in other countries (by a few times). Because Swiss labor and manufacturing is so expensive, Swiss suppliers end up having to charge companies that use their parts for the production of items such as watches, a lot of money. All these high manufacturing costs logically translate into high retail prices, when in some instances the only thing “better” about the product is that it is made in Switzerland. 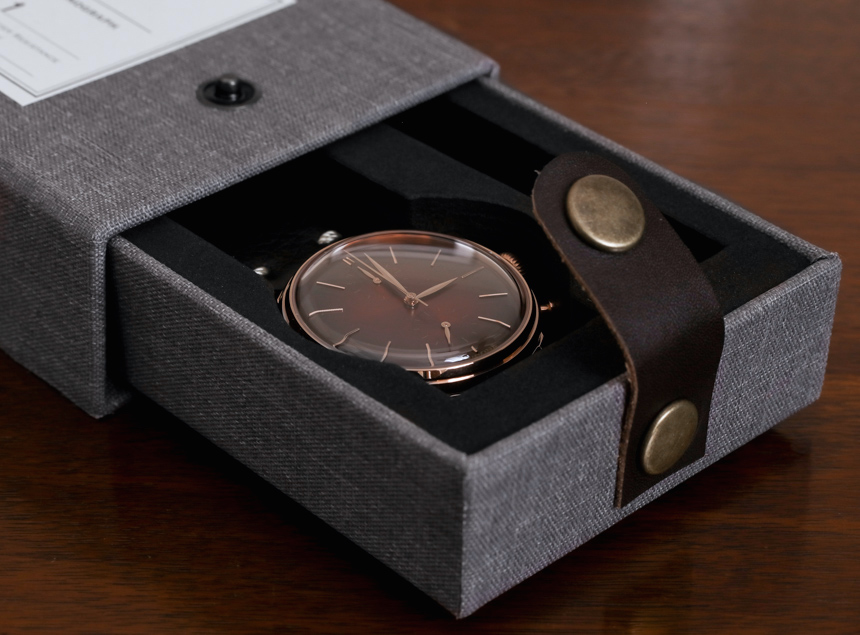 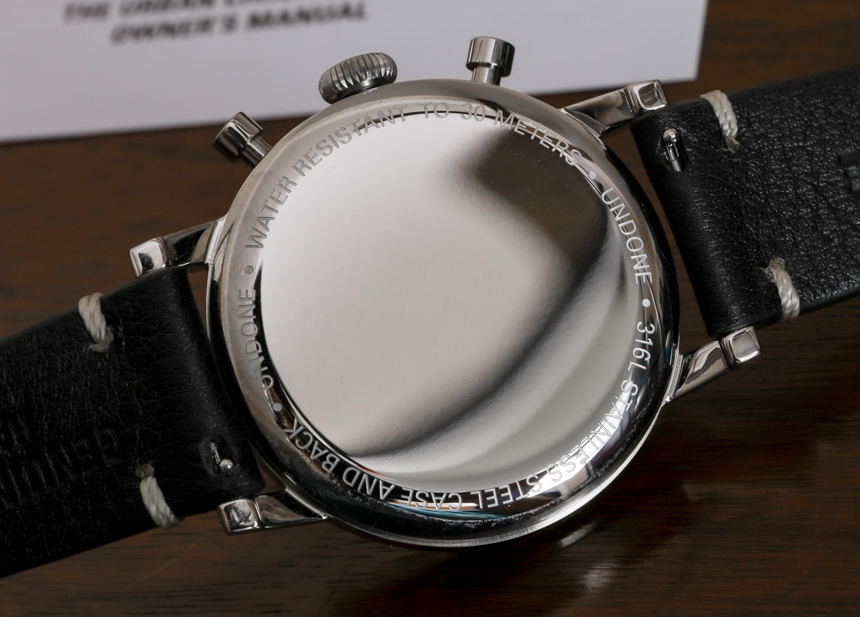 It is also true that in many instances, Swiss watch brands take advantage of the above common situations and simply charge a lot more than they need to for a particular product. Their justification isn’t one of utility or inherent value, but rather that the more expensive something costs, the more likely a consumer is willing to consider it as a serious luxury item. I do agree that such a mentality is both unethical to consumers, and doesn’t inspire an enormous level of confidence in the Swiss watch industry. I also believe that the existence of such situations has led to a nascent movement by some to bash Swiss Made watch value propositions, especially by brands producing timepieces in the Far East. What further adds fuel to the fire is that many of those brands have parts produced in Asia, whose factory owners are sometimes in shock at how much their components are being marked up by their clients to the West. That is an entirely different conversation, but I did want to remark on it because I see a lot of “price bashing” and I wanted to help put it into context for consumers.