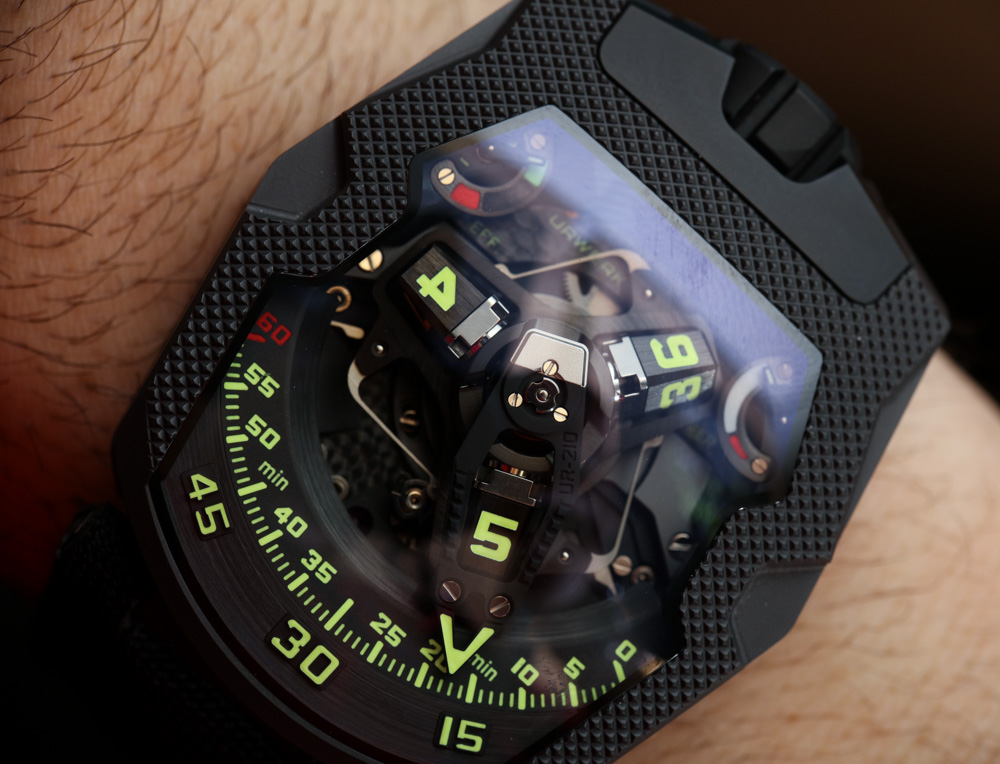 Whenever we talk about Urwerk, it’s par for the course to say that these spectacular machines have just got to be seen to be believed. The newest release from their mad scientists, the Urwerk UR-210 CP “Clou de Paris,” is no different, with a black and textured visual refresh. Last time, we saw the UR-210 model with its radical satellite hour indicators and horizontal retrograde minute display, it was dressed up in a naked stainless steel edition dubbed “Full Metal Jacket” (hands-on here). This iteration takes the same UR-7.10 caliber with its “activity tracker” (more on that in a second) and rewraps the whole package in a sinister, textured skin that gives the Urwerk UR-210 CP “Clou De Paris” watch a certain biologic personality and lends further credence to the notion that a mechanical watch is a living, breathing thing. 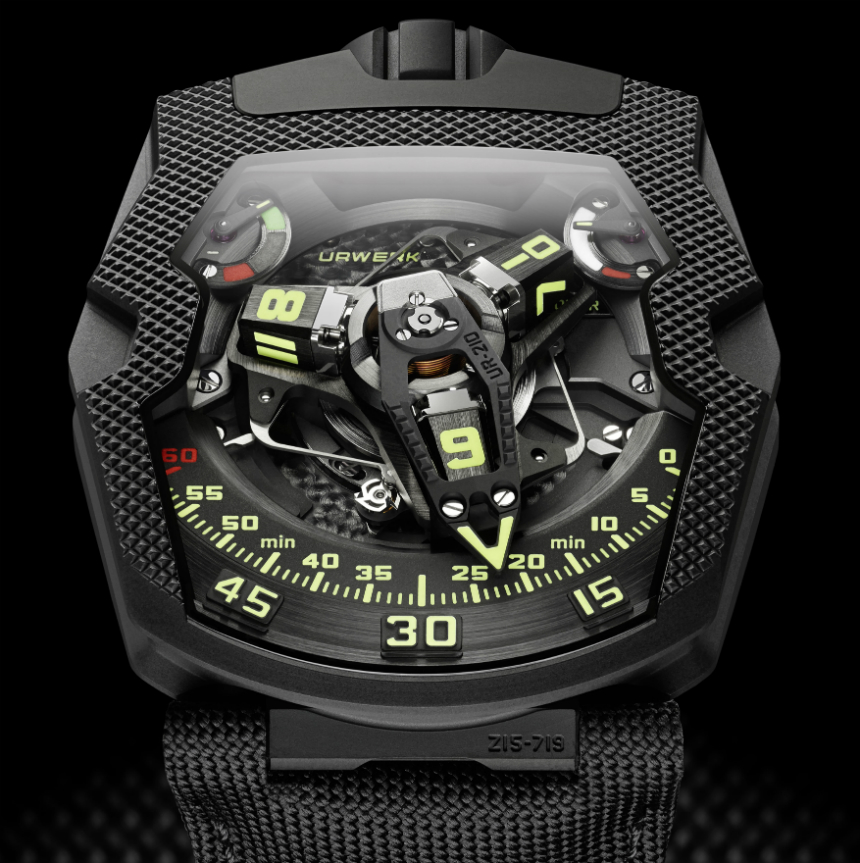 Literally translated “nails of Paris,” the Clous de Paris is a traditional guilloché pattern of hollowed, intersecting lines that form tiny pyramidal shapes. It’s these shapes that ultimately create a bumpy texture reminiscent of a hobnail pattern in glassware, and leave the wearer with a highly tactile level of interaction with the watch – a relationship that extends beyond just watching the movement tell time. 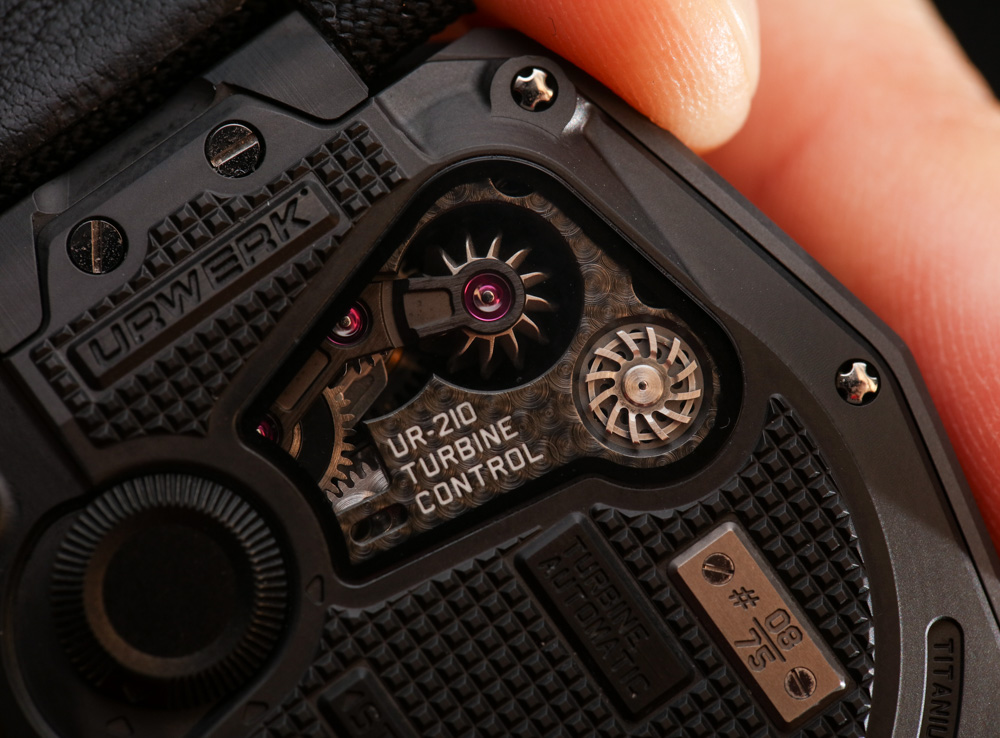 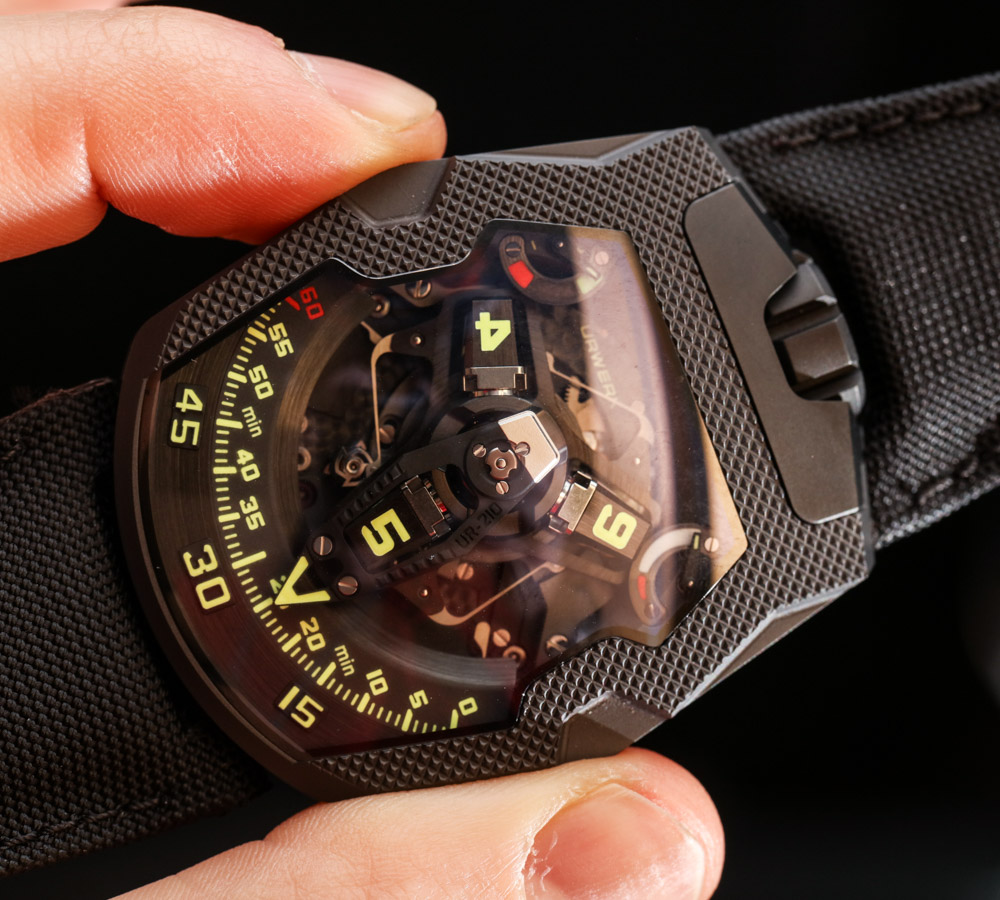 Called “the pinnacle of this complication” by designer Felix Baumgartner, the UR-7.10 movement exhibited in the Urwerk UR-210 CP “Clou De Paris” edition does more than tell the time. It also exhibits dual winding indicators. On the upper right side (the 3:00 side of the case, if this watch told the time under “ordinary” circumstances) you’ll notice a traditional power reserve indicator, letting you know how much of the watch’s 39-hour reserve remains. And on the left, you’ll notice the red and green winding efficiency indicator – an Urwerk innovation that lets you know how efficiently you’re adding power to the movement over time. Go for a brisk jog, do a few jumping jacks, or recite the Gettysburg Address in sign language, and you’ll see the indicator point squarely to the green zone. Conversely, cash out on the couch for a few hours and you’ll see the needle creep back towards the red letting you know you’ll need to get back out there if you want to keep the watch fully wound. 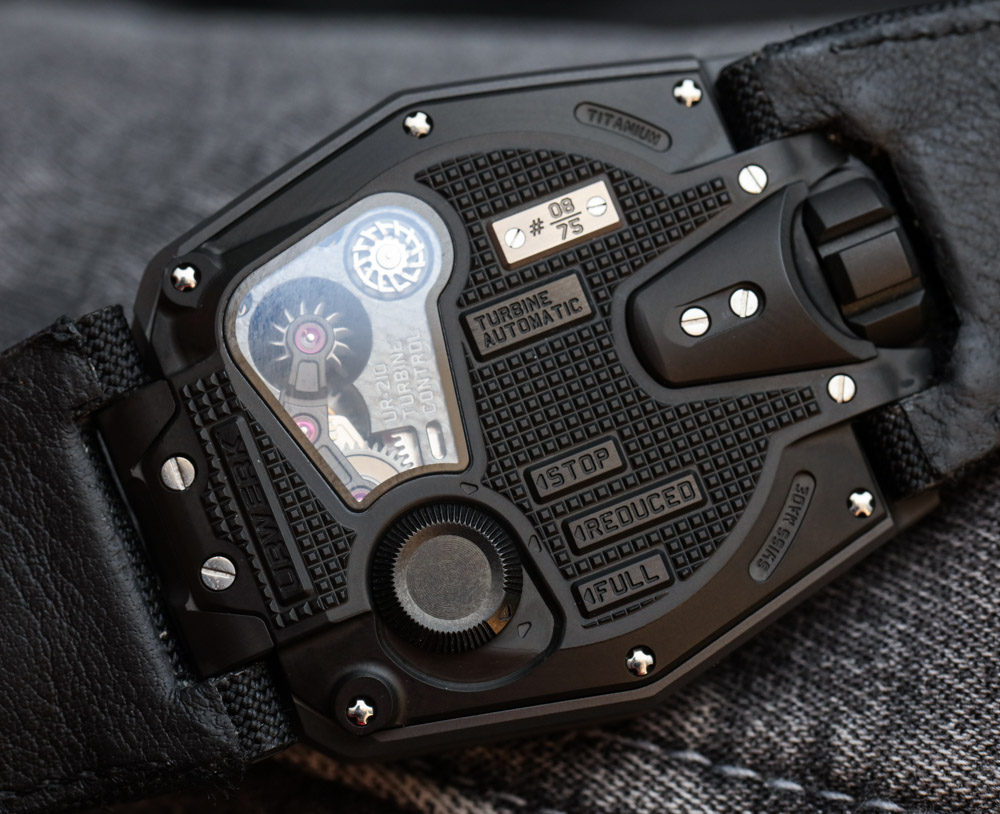 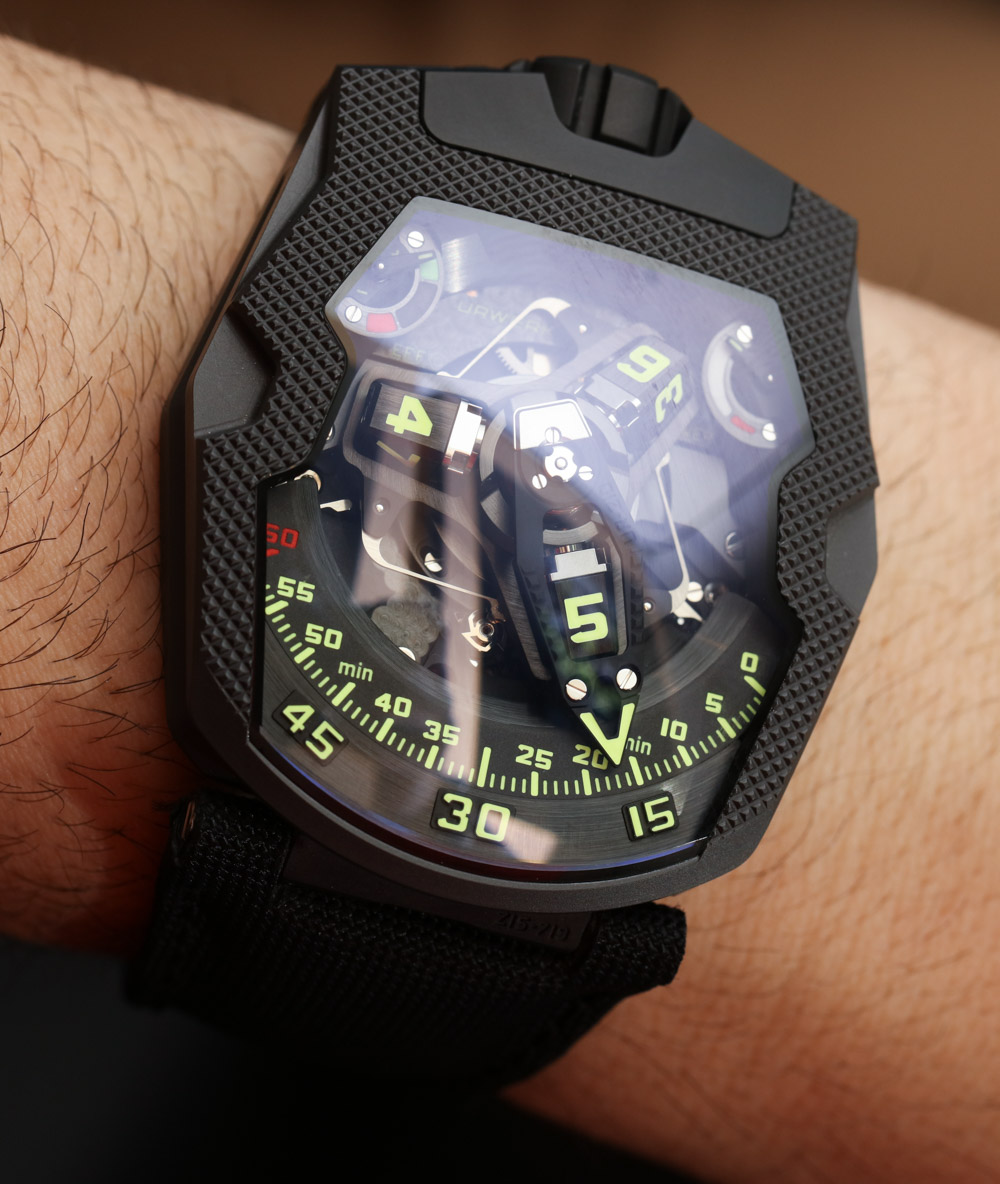 It’s a neat motivator that’s not entirely unlike a fitness tracker of sorts and, quite frankly, an innovation that would be particularly handy in watches that aren’t in the six-figure range. You’ll notice on the back of the case a series of efficiency selectors which enable the wearer to interact with the watch in a third way, where – armed with the knowledge of both the remaining reserve and the current winding efficiency – you’re able to select the degree of sensitivity with which the mainspring collects energy. This ranges from ultra-sensitive (“full”) to moderate (“reduced”), to fully locked (“stop”), should you find yourself partaking in an activity vigorous enough to potentially damage the winding mechanism. 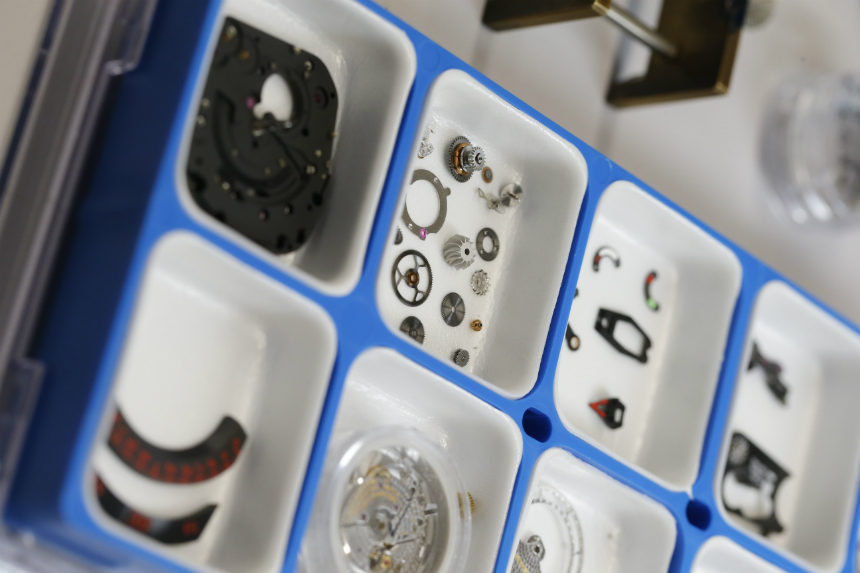 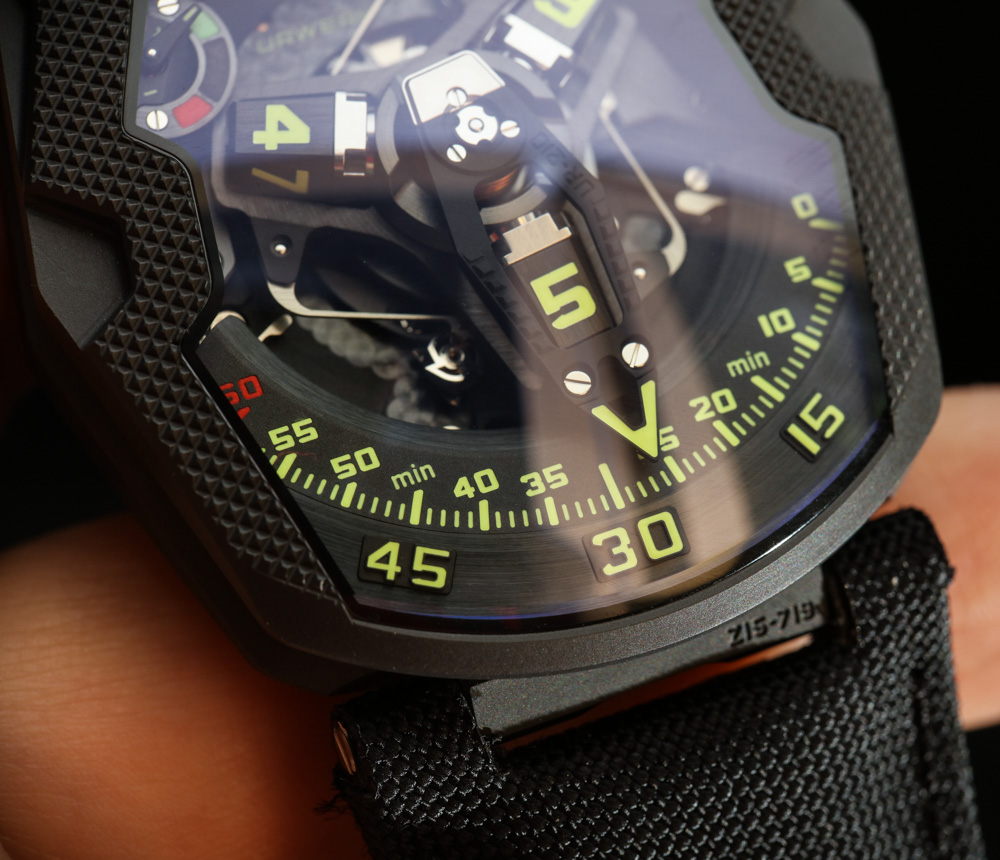 The rest of the Urwerk UR-210 CP “Clou de Paris” tells the time in spectacular Urwerk fashion, and thanks to the luminous green-on-black contrast, it looks to be brighter and more legible than ever. Each of the satellite hour pointers trace a 120° arc across the dial’s minute track from right to left, leaving little doubt as to what time is being displayed at any given moment. Then, at the top of the hour, the retrograde minute pointer snaps back to the right of the dial to dock with the next hourly satellite – an action that is completed in less than a tenth of a second.

The Urwerk UR-210 CP “Clou De Paris” edition shares a great deal with the UR-210 “Black Hawk” edition (hands-on here) from years past, including its assembly from a AlTiN-coated titanium and steel case. Obviously, the largest difference this time is the textured case finishing, and it has a price of $150,000. urwerk.com