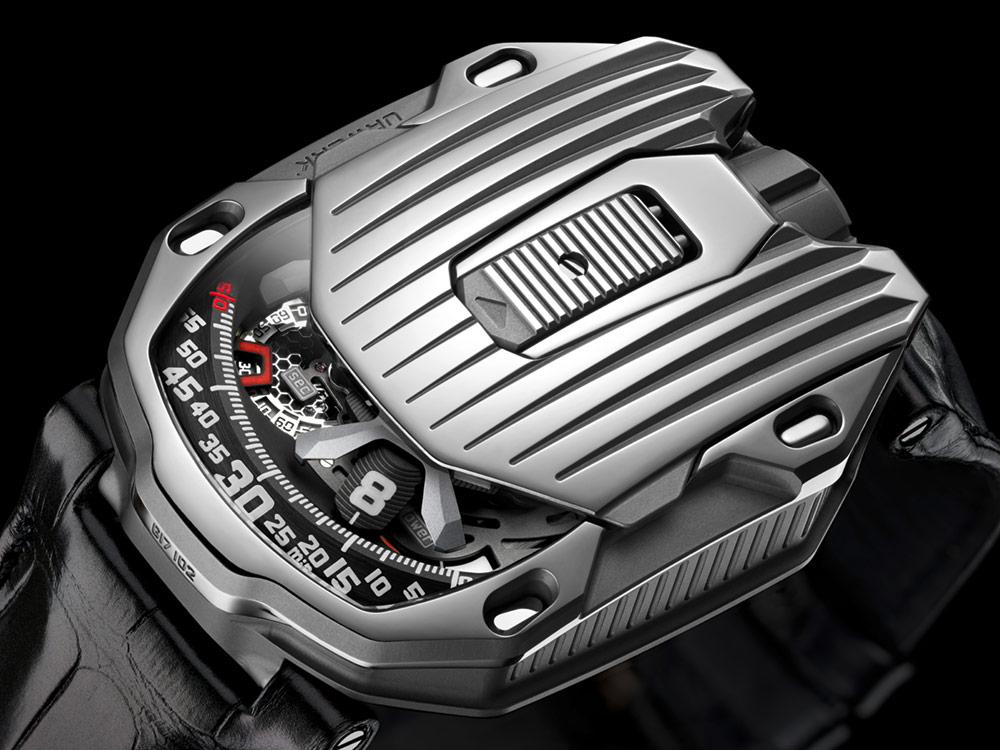 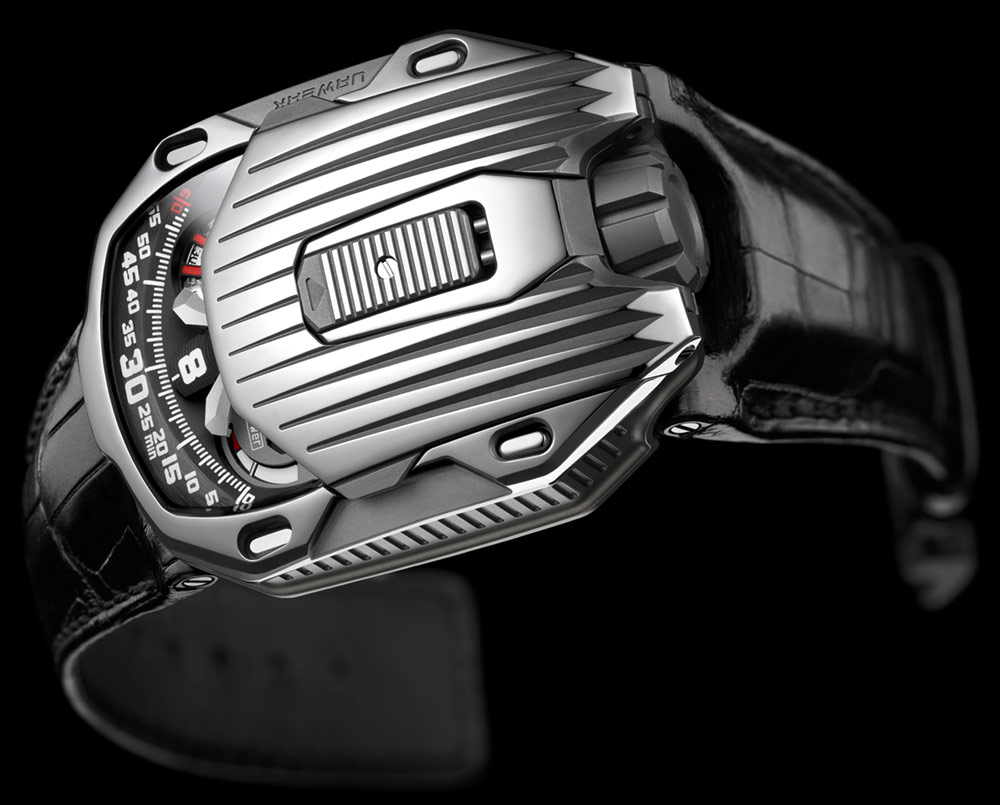 Two decades is a damned long time to continually iterate upon, and subtly raise the bar of one’s own setting, but Urwerk has managed to do just that, and is now celebrating 20 years of head-turning horological innovation and wizardry with the Urwerk UR-105 CT Streamliner – a new release that pays homage to the brand’s earliest design muse, New York City. 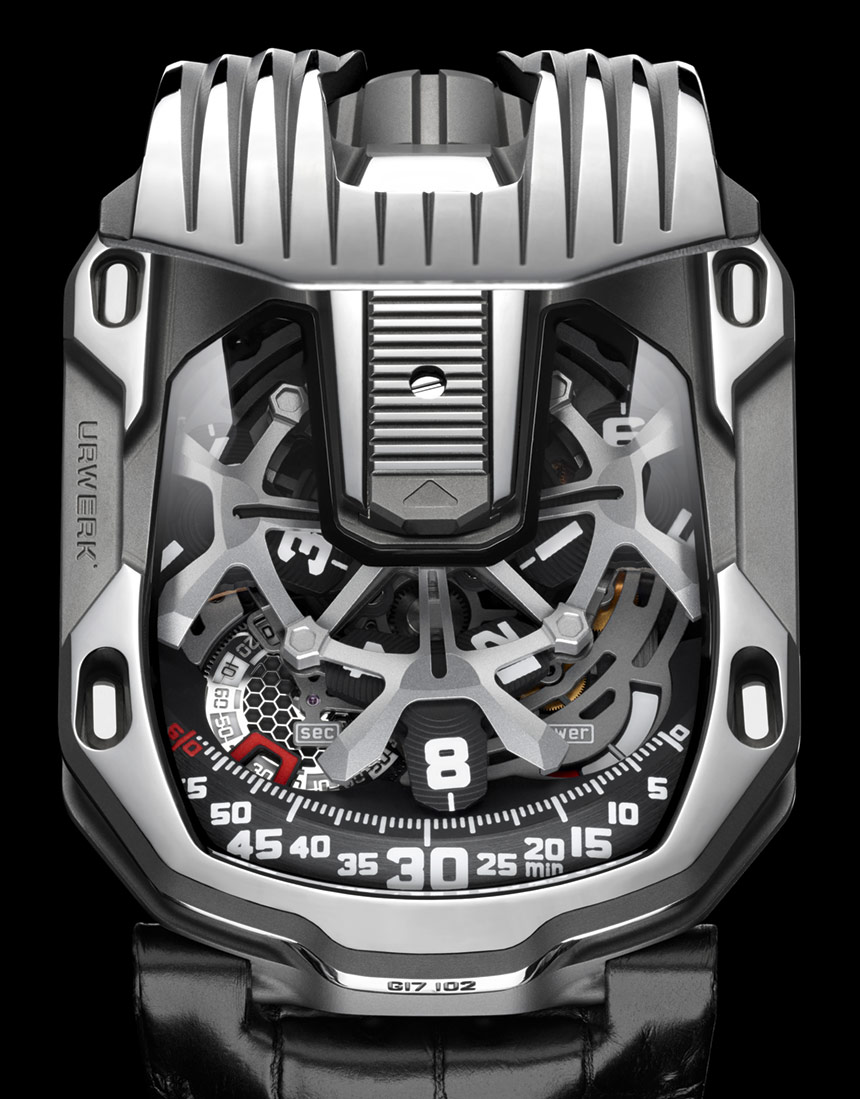 Last time we checked in with Urwerk, it was to come away with some firsthand impressions of the Amadeus UR 210 – a steampunk mashup of sorts that married the intricate engravings from an 18th century clock to Urwerk’s signature orbiting satellite time display and a retrograde minutes counter. Did it work? Depends on who you ask. To be fair, it was about as far a departure as we’ve seen from the sleek, nü-futuristic vibe that we’ve come to know and love Urwerk for. Thankfully, the new Streamliner is very much a return to form for Urwerk – striking in its geometric angularity and symmetry, while subtly carrying a few retro art deco flourishes, just so there’s no mistaking the fact that a few select icons of the New York City skyline maintain the foundational inspiration here. 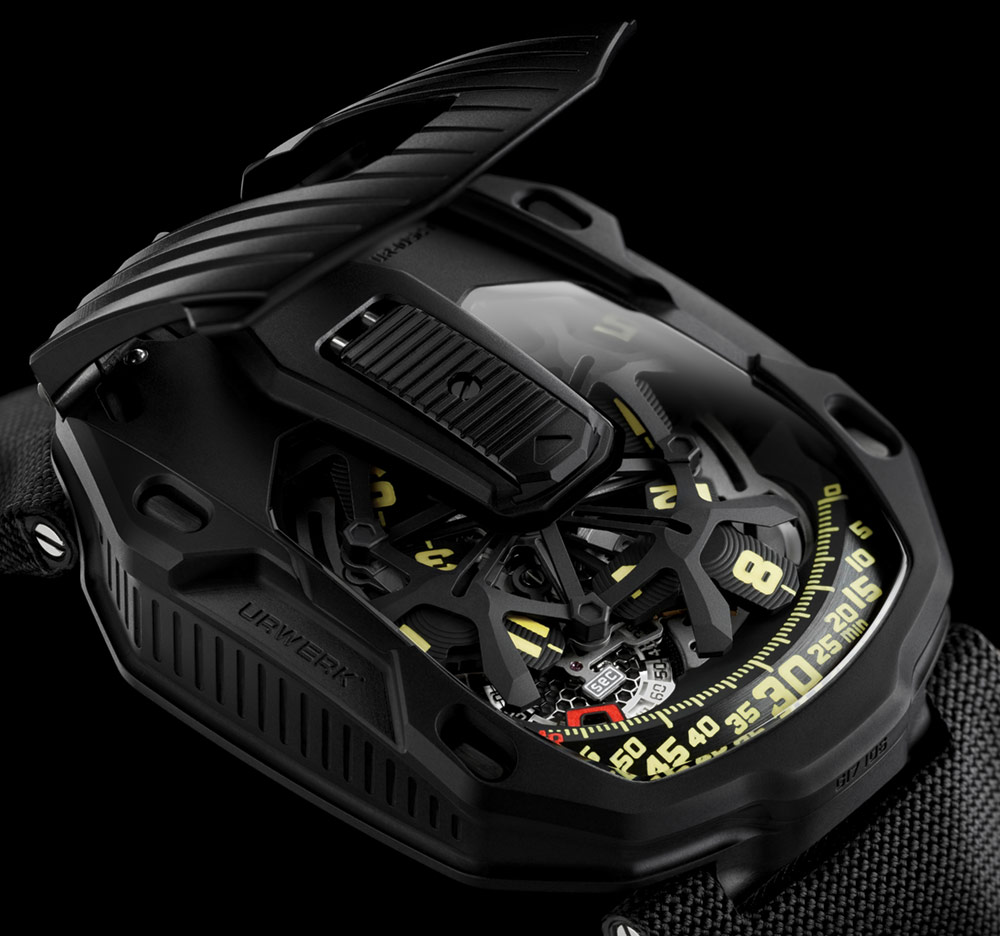 The Streamliner utilizes Urwerk’s UR 5.03 “wandering hour” automatic caliber, characterized by four rotating satellites, each bearing three numerals for a total of all 12 hours. The tip of each hourly satellite carries a pointer which indicates the current minutes as it sweeps from right to left across the 39.5mm-wide dial. A digital seconds readout, displayed in tens of seconds completes the readily visible timekeeping details on the Urwerk UR-105 CT Streamliner. Crazy details like the bronze Geneva crosses upon which the satellite hours turn, and the openworked aluminum frame, along with the rest of the inner workings of the movement are all shielded behind the watch’s protective cover. 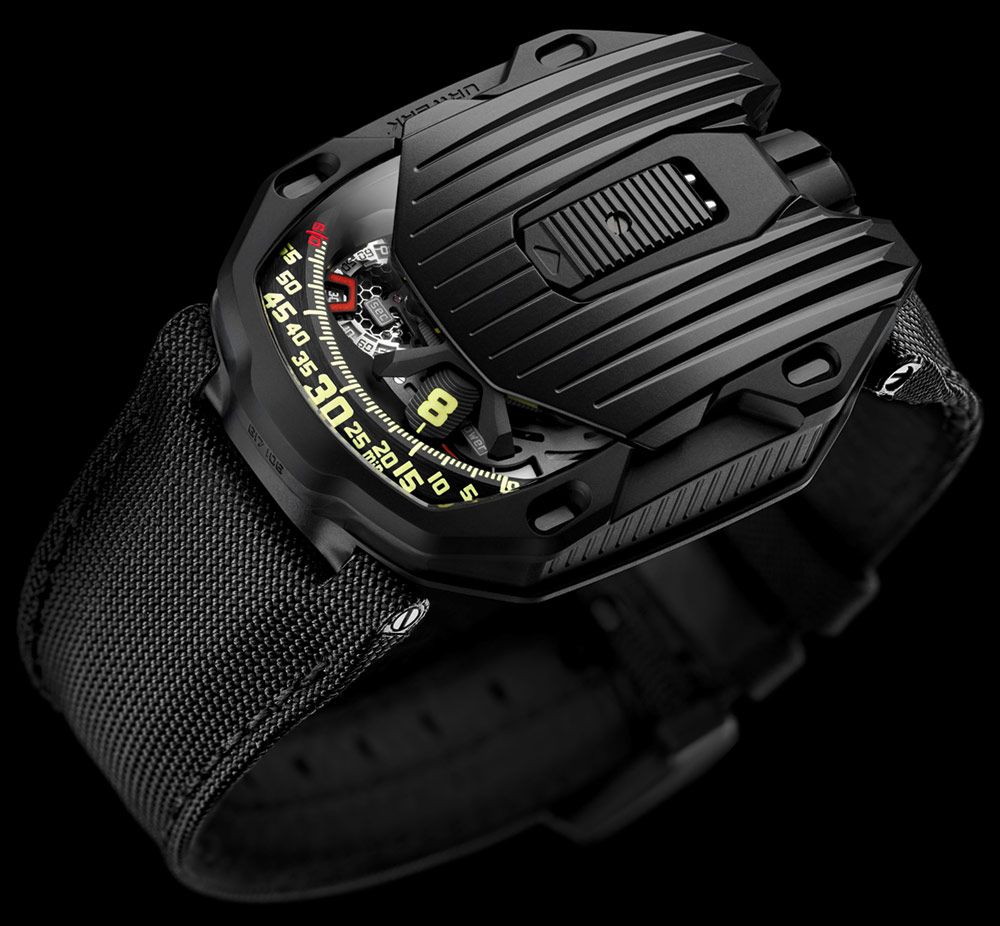 Granted, it’s not quite as cool as the fully reversible case of the UR-T8 (sort of a cross between a Jaeger LeCoultre Reverso and the dashboard of the Batmobile), but from a visual standpoint, the cover mechanism works extremely well in this instance. Here, its deep grooves seem to lend themselves nicely to the Urwerk UR-105 CT Streamliner’s namesake, while simultaneously directing the wearer’s attention down the octagon-shaped case and towards the timekeeping elements on the 6:00 side of the case – because it is still a watch, after all, and your eyes should know where they can find the time. 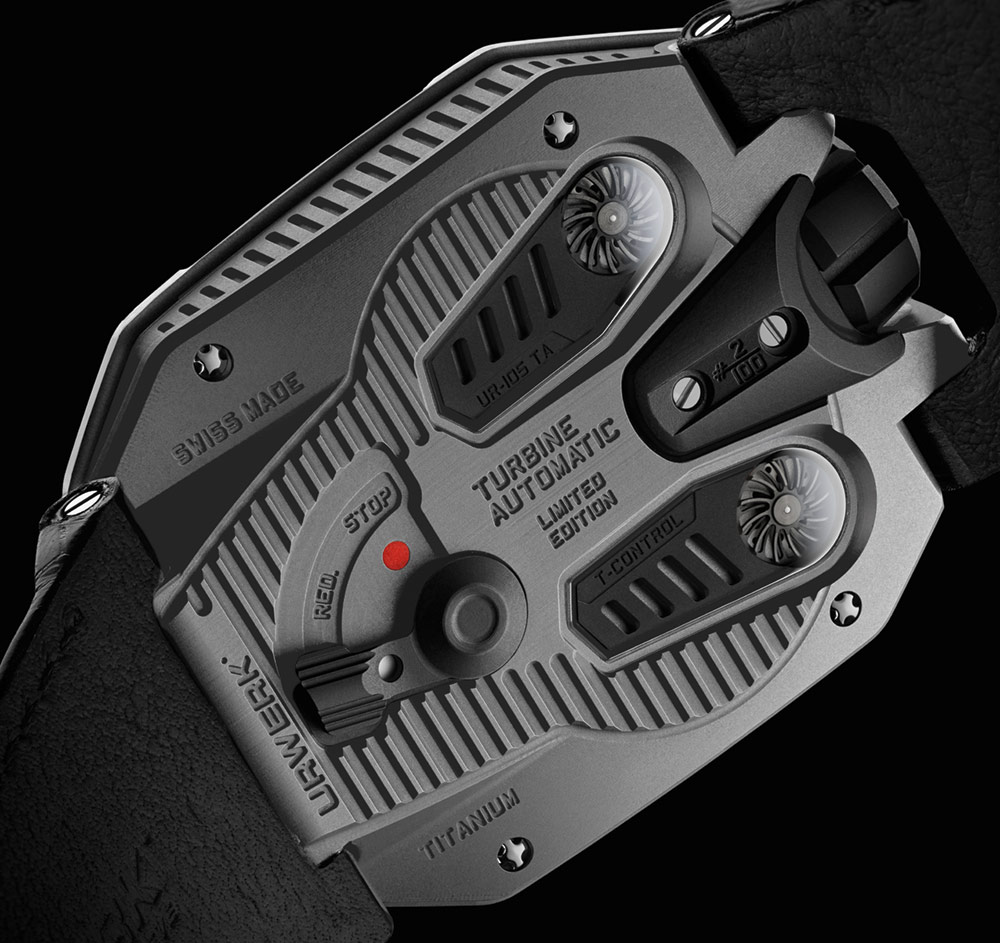 Flip the Urwerk UR-105 CT Streamliner over, and you’ll notice two pneumatic turbines on the back, which are designed to regulate the movement’s winding efficiency and prevent the mainspring from being over-wound. Of course, you can fully disengage the self-winding system and manually wind the crown if you’re overly concerned about making the mainspring work too hard. It’s not new functionality to the UR 5.03 movement per se, nor is it particularly critical that the wearer adhere to a certain set of winding rules; but rather another neat way that the wearer can interact with their watch, and a running signature of sorts for Urwerk. 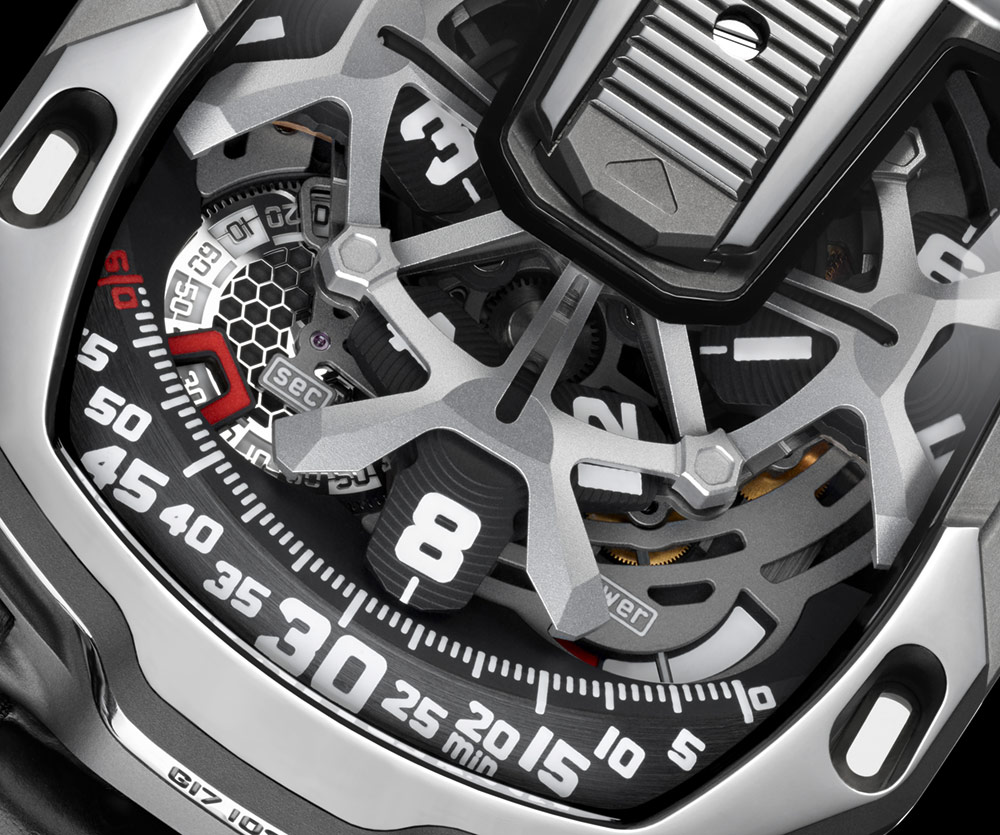 Two pneumatic turbines on the back govern the self-winding rate, which can be set with a lever. In the FULL position, the slightest movement of the wrist is harnessed to rewind the barrel spring. Turn the lever to STOP to disengage the self-winding system and wind up the UR-105 using the crown. An intermediate position, RED (for reduced) engages the turbines to dampen the winding rotor and avoid over-stressing the mainspring, if you are particularly active.

Par for the Urwerk course, the UR-105 CT Streamliner watch will be produced in very limited numbers in two variants – titanium and polished steel with red and white details, and a stealthy titanium with PVD-coated steel and bright yellow accents. Both will carry a price of 65,000 CHF. urwerk.com