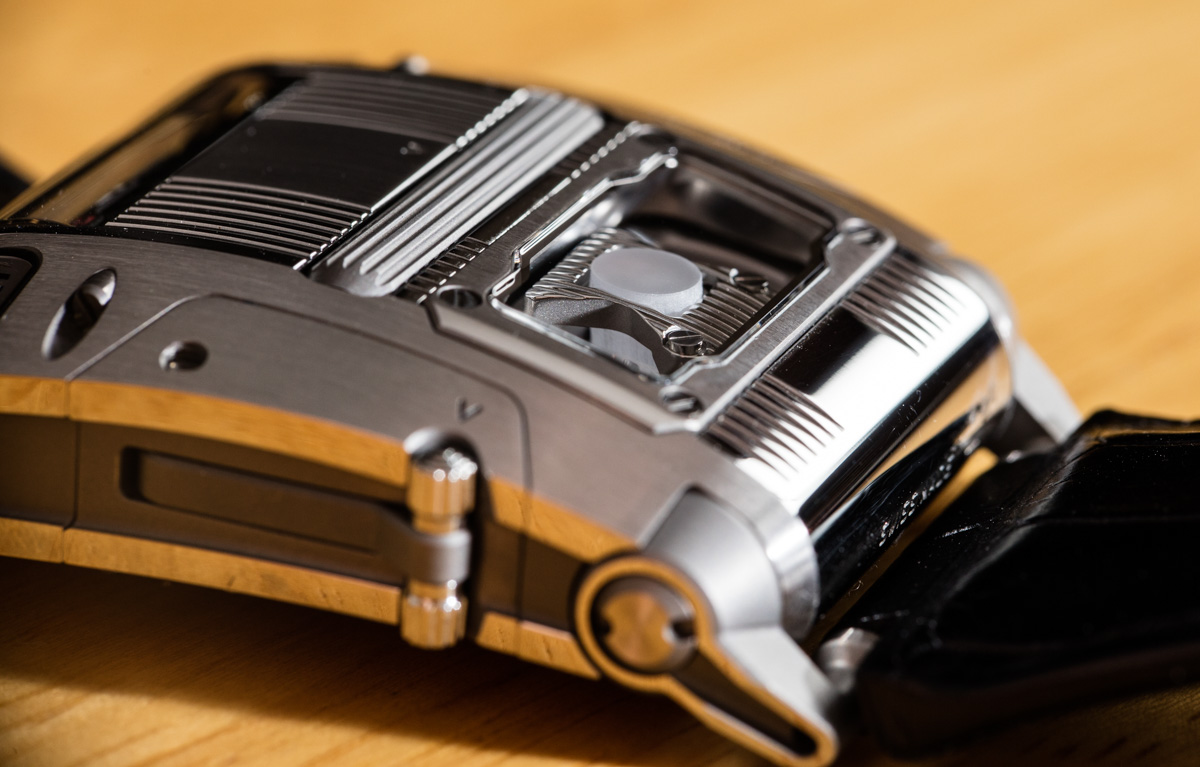 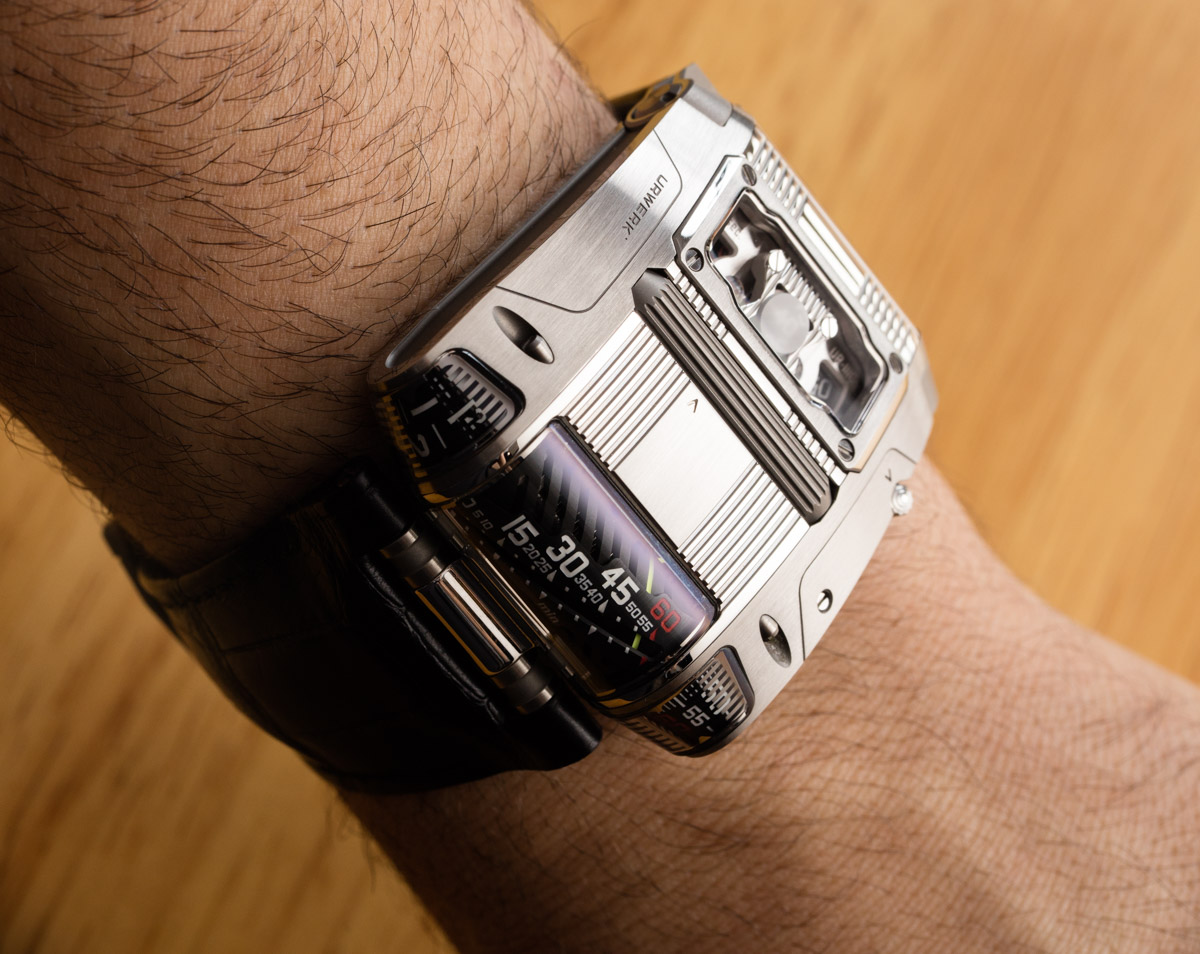 This Urwerk UR-111C is the latest watch from our favorite “optimistic futurist” Geneva-based brand. In their utopian future, everyone can afford the equivalent of over $100,000 per watch. I want to live in the Urwerk future. Part of that future includes wearing such nicely finished pieces of steel in smooth, yet technical shapes like the UR-111C. I’ve nicknamed it the “baby cobra” because it is the thematic follow-up to Urwerk’s previous UR-CC1 King Cobra watch. Both share a “linear” indication of time for the minutes controlled by a spinning cylinder behind a dial with a curved bright green line on it. 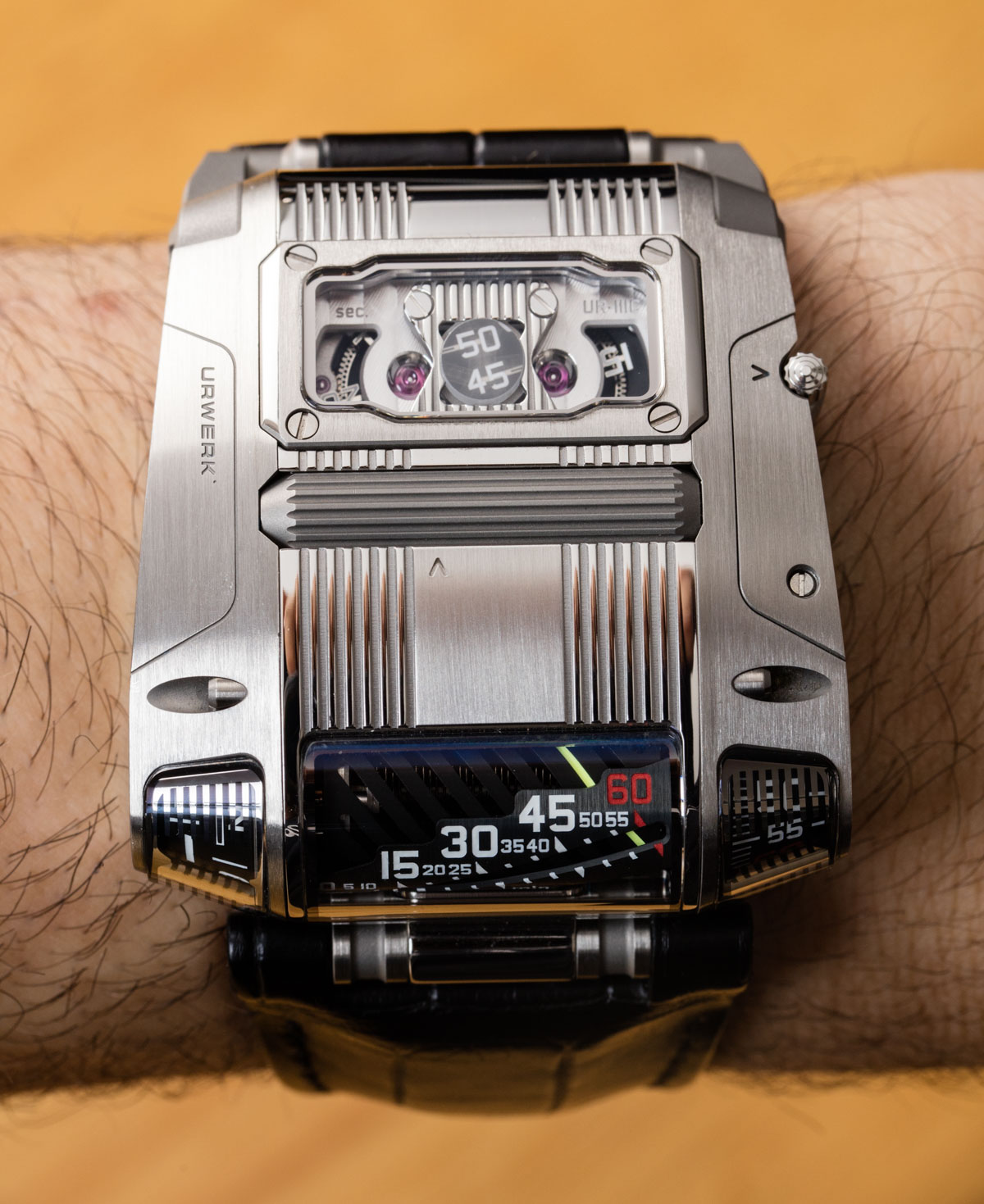 When Urwerk announced the UR-111C (debuted on aBlogtoWatch here), they kept mentioning how happy they were with the compact size. I have to say that this is among the most wearable Urwerk watches ever – even though I don’t really think Urwerk is guilty of commonly making unwearable watches. Other brands are far more guilty of that. With that said, the UR-111C is 42mm wide, by 46mm long, and 15mm thick. It seems to wear smaller than its dimensions would otherwise imply. Urwerk will make the watch in two limited editions, both of which are in steel. This is the naturally-finished steel while there is also a darker gunmetal steel version of the UR-111C case as well. 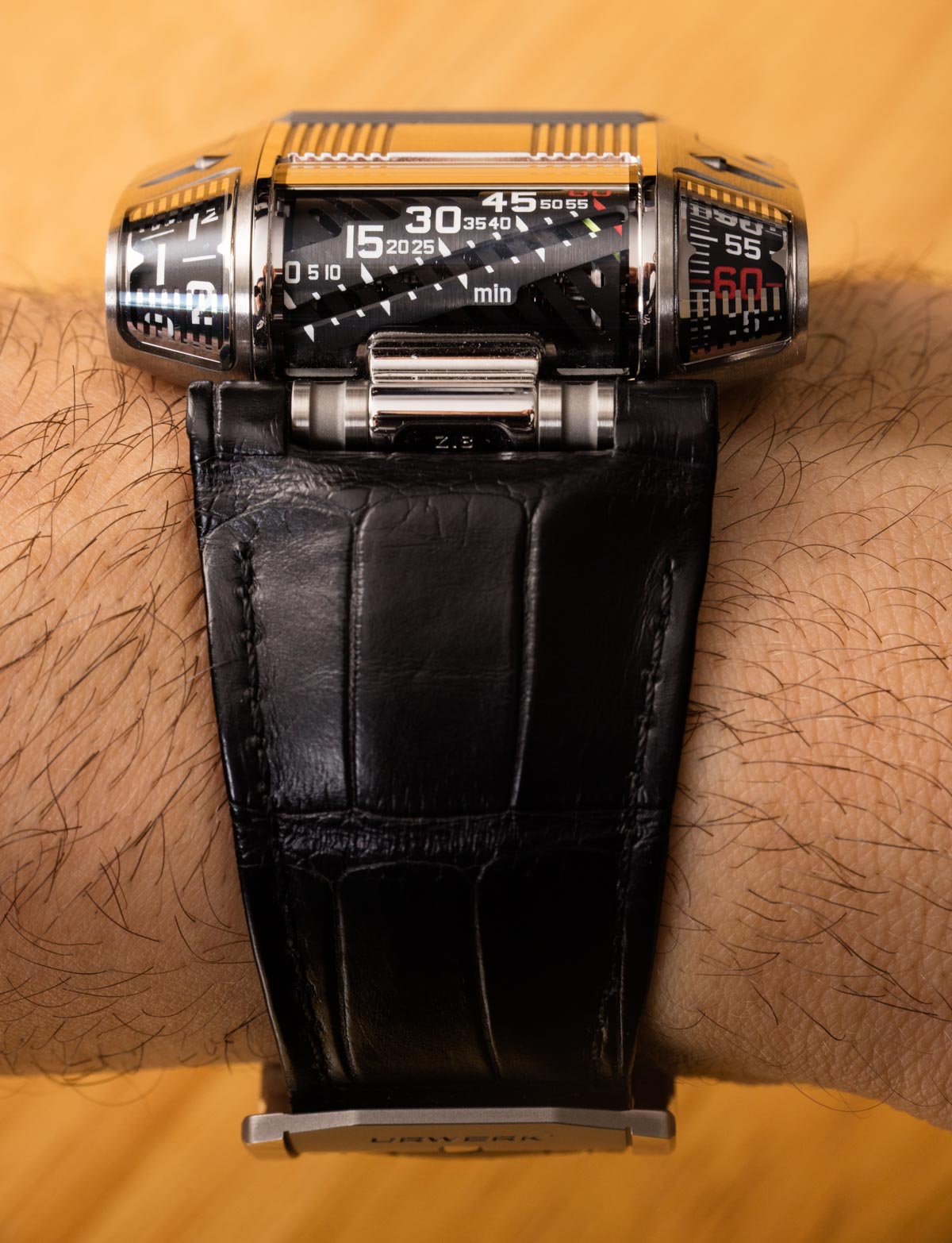 In typical Urwerk fashion, the case fit and finishing is excellent. In addition to looking nice, the case parts have excellent tolerances and all fit together very well. This is impressive given how custom everything needs to be and the rich diversity of shapes, finishes, and materials used all over the UR-111C watch case and movement. The rear lug structure, however, doesn’t articulate – even though it looks as though it is meant to. At this price, and with that design, I’d like to see some lug articulation action going on.

My other complaint about the watch is legibility. There simply isn’t enough emphasis on indicating the hours in my opinion, and the side windows that indicate the hours on the left and the minutes (again) on the right use thin metal sheet applications on the inside of the sapphire crystal to create the look of dials/markers. These elements reflect too much light and make it hard to see where your eye needs to go. You could probably get used to it, but it is a detail that I think could use some better refinement in future versions of the watch. Minutes are indicated twice. First using the linear-style indicator in the center of the case, and then again in turning drum-style on the right flank of the watch. I previously thought the watch didn’t have luminant and then I realized I have overlooked that this watch indeed has lume-painted numbers and markers. This includes both the front-facing indicators as well as the case top-mounted seconds indicator. The luminant is very lightly printed so it needs a lot of light to charge, but once it is all lit up the UR-111C looks really cool in the dark. 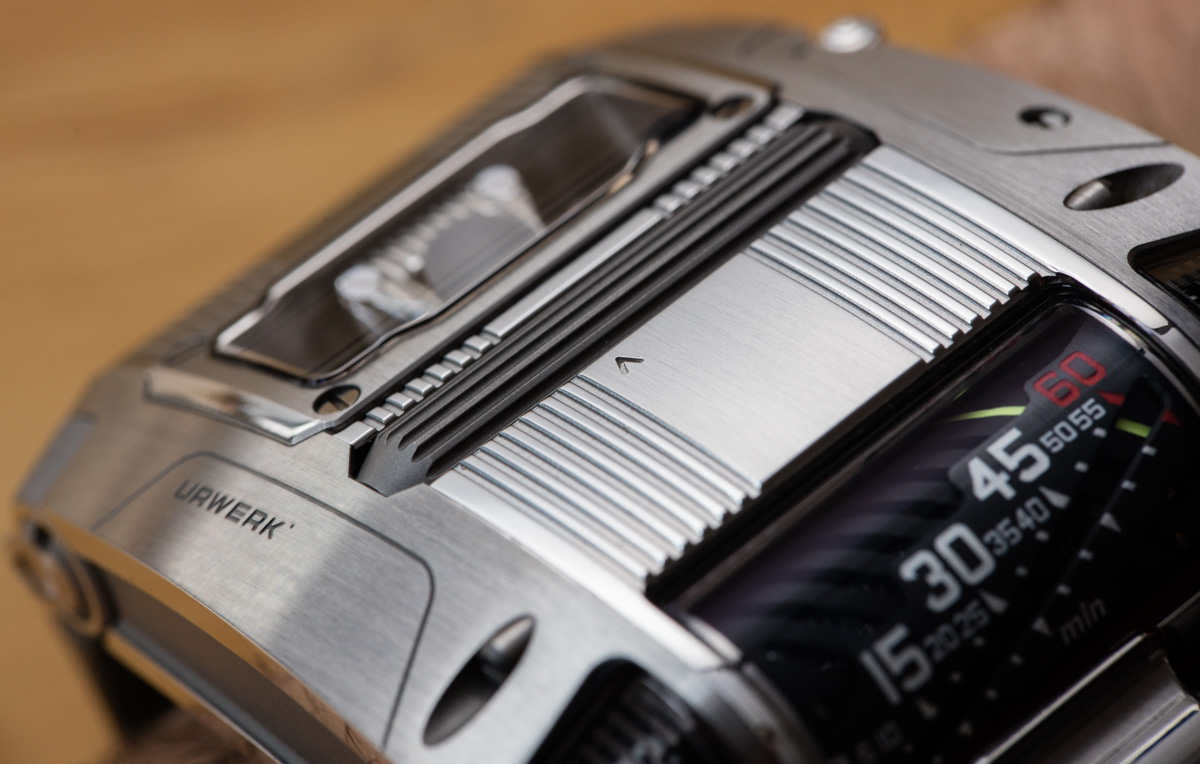 On the top of the UR-111C is a seconds indicator, unlike anything you have seen before. This is also the first time I’ve seen ulexite used in fine watchmaking. Some people might remember ulexite from when they were kids (it was often called TV rock or TV crystal). Placed over anything, it seemed to project the image underneath it on its surface. Two opposing discs spin like gear-teeth under the ulexite and the visual result is pretty cool. The view through the ulexite is understandably “milky,” but it makes for a neat visual – and isn’t that the point? I felt like the display system of the watch was a bit too much “style over substance” in the UR-111C. Other Urwerk watches have genuinely proven that you don’t need two hands spinning in a circle to effectively and quickly indicate the hours and minutes. The UR-111C is cool, and it is inspired, but it also doesn’t seem to help justify the sensation that this is a tool – even a fantasy tool. Other Urwerk models often feel like futuristic tool watches – and we love them for that. This is more designed to impress and present some novelty. I’m not sure Urwerk is really solving any legibility issues in this product. But with that said, the watch does have its fair share of excellent saving graces.

The other real technical trick here is how you wind the watch – and this system is actually the most innovative thing about the watch. It just begs the question, is almost $150,000 worth a neat winding experience? The crown for the watch is actually a wide roller, which exists on the top of the steel case. You press your finger on it pushing back toward the rear of the case in order to wind it. When you pull out the lever on the right side of the case the roller-crown goes into the time-setting mode. It is cute how “set time” is printed in small letters on the metal lever. In my opinion, however, it takes just a bit too much torque to turn the roller in order to wind the watch. It still works as a fun fidget device, but I think the winding process would have been much more satisfying from a tactile perspective if it was at least 20% or so easier to turn. Gearing solutions inside of the case could have accomplished this. It would have reduced winding efficiency, but the watch movement is an automatic anyways – so isn’t the tactile experience a bit more important in a product such as this? 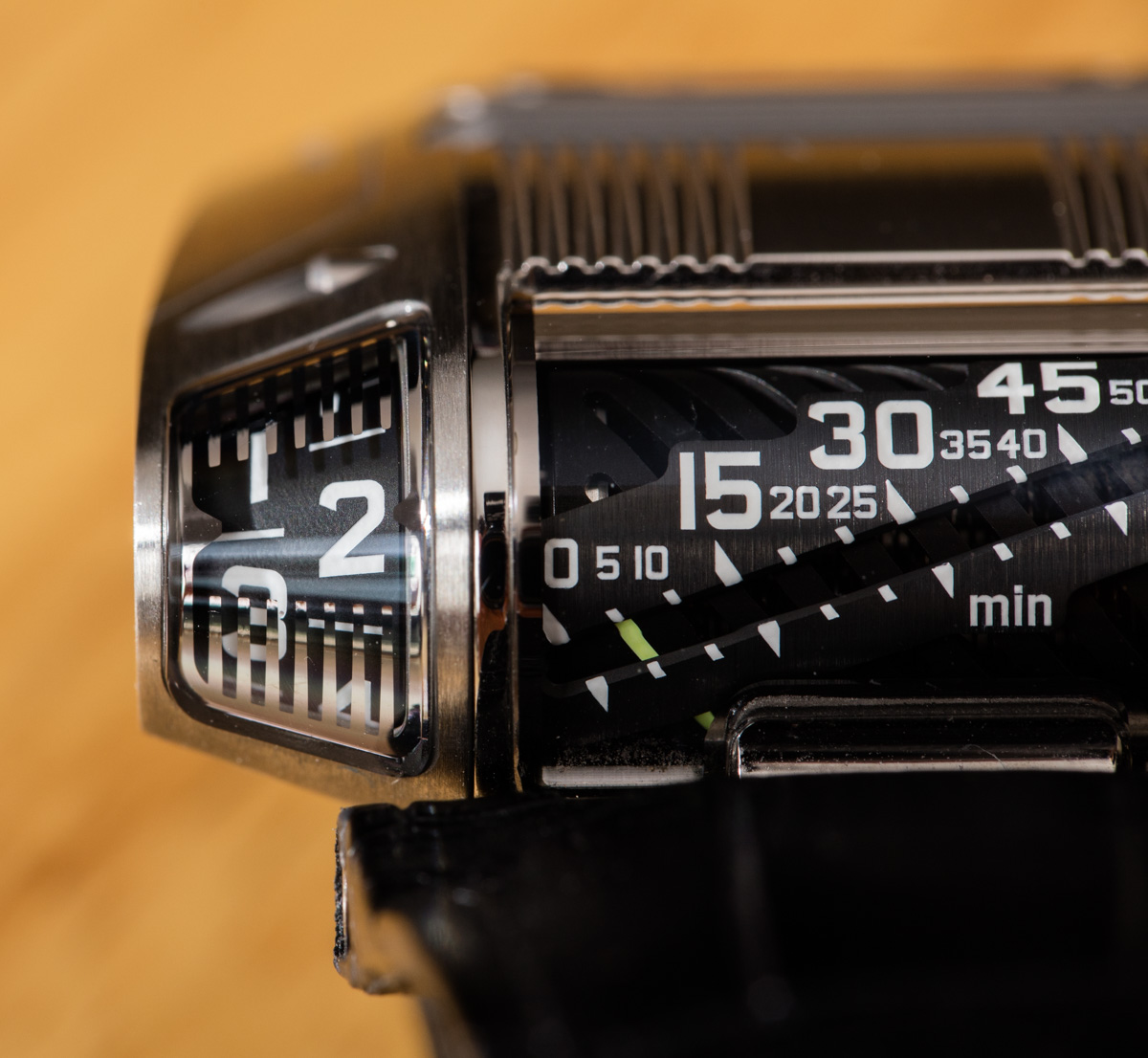 In our above-linked debut article on the Urwerk UR-111C, Zen Love does an excellent job talking about more of the technical elements of the UR-111C such as details about the movement and how the watch is made. This hands-on review of the Urwerk UR-111C is more about how it feels and functions as a watch. I’m wearing it while I write this and I am impressed by its wearing comfort and style, but there are more than a few things I would like Urwerk to do differently the second time around. My final quip about the UR-111C is that the caseback is comparatively underwhelming for an Urwerk. No windows, no complications, no interesting design. For a brand so well-known for an enormous level of detailing and design all over their watches, the UR-111C caseback seems to be a study in minimalism. It does have some contrasting polished lines which merge with the lines on the top-side of the case, but I wonder who else feels that the UR-111C caseback is a bit of a missed opportunity. What, no turbines? 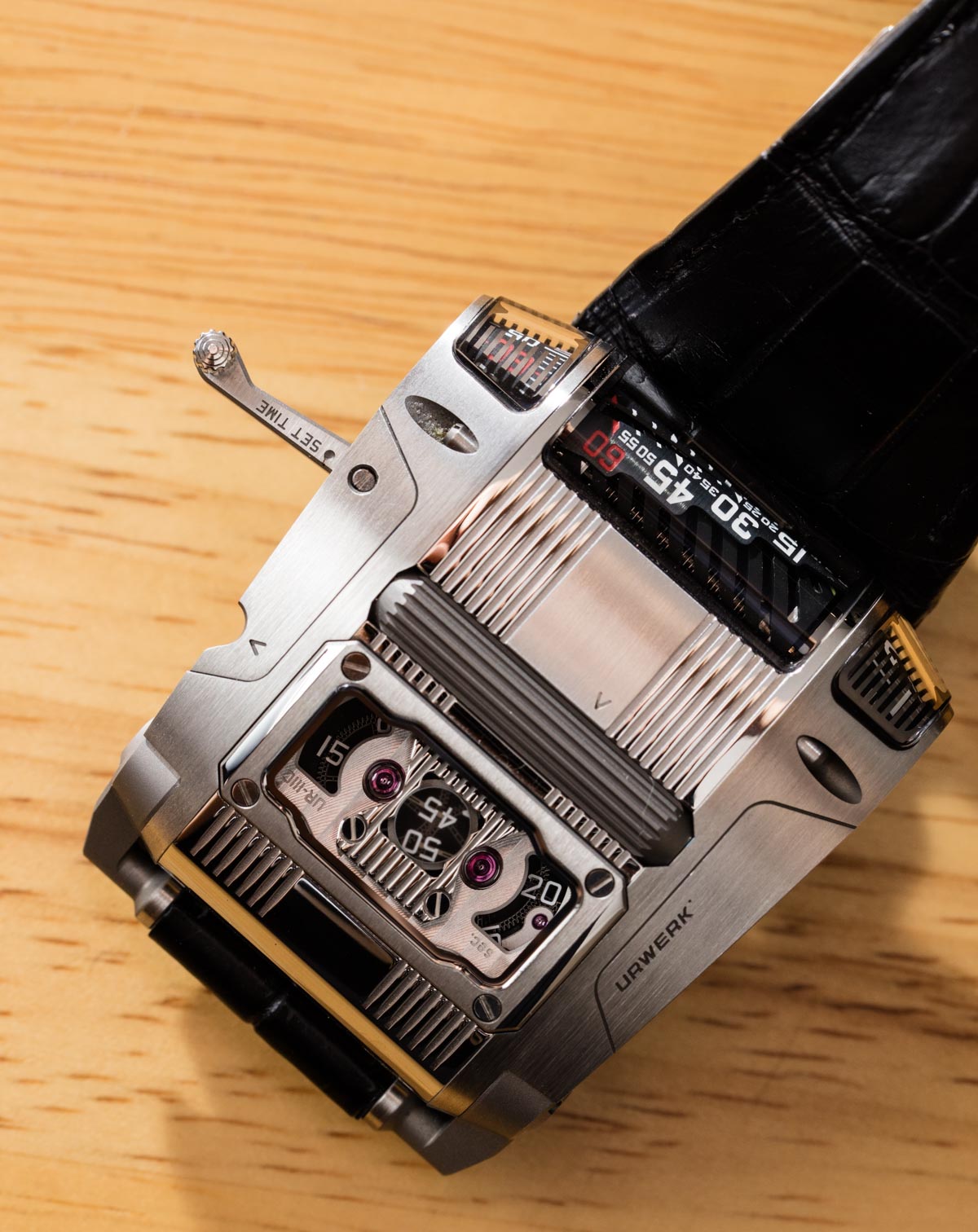 Urwerk places the UR-111C on a brand-standard black tapering crocodile strap, which is buttery smooth and comfortable. It makes for a good look, but I also think that this watch would have really benefited from a custom bracelet. That isn’t likely, but Urwerk has done bracelets before, and they might do it again. Overall the Urwerk UC-111C will do well and is a satisfying new member of the brand’s larger product family. It isn’t, however, an instant classic and it isn’t my favorite Urwerk. I think a lot more could be said of it from a value proposition standpoint, but it isn’t particularly cheap either. Coming in at half the price would have made this a major commodity for collectors this year. Though at a retail price of 130,000 CHF, the Urwerk UR-111C will remain a prestigious wrist-worn fidget spinner for the wealthy and horologically-inclined. Urwerk will make the UR-111C as a limited edition of 25 pieces (each) in the two different steel finishes. Learn more at Urwerk here.