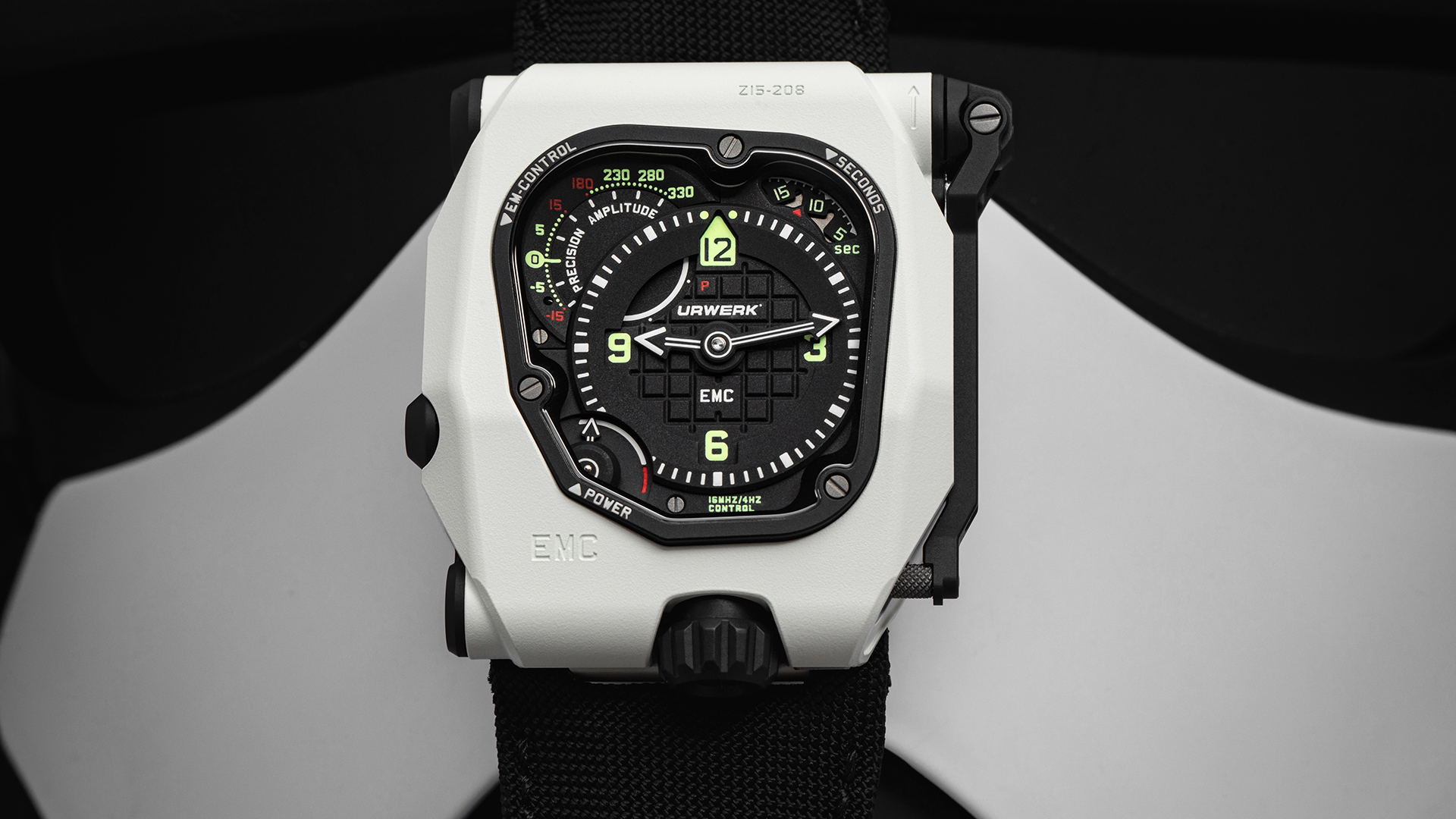 It’s no secret that the people behind haute horlogerie brand Urwerk are big fans of the “Star Wars” franchise. Over the years, the futuristic marque has made several nods to the galaxy far, far away with internal project names like Project C-3PO and the Falcon Project, but for its latest release Urwerk makes these “Star Wars” references a bit more overt. Inspired by the iconic look of the franchise’s white armored Imperial henchmen, the limited edition Urwerk EMC TimeHunter Stormtrooper adds a rugged blasted white ceramic colorway to one of its most technically advanced model lines. 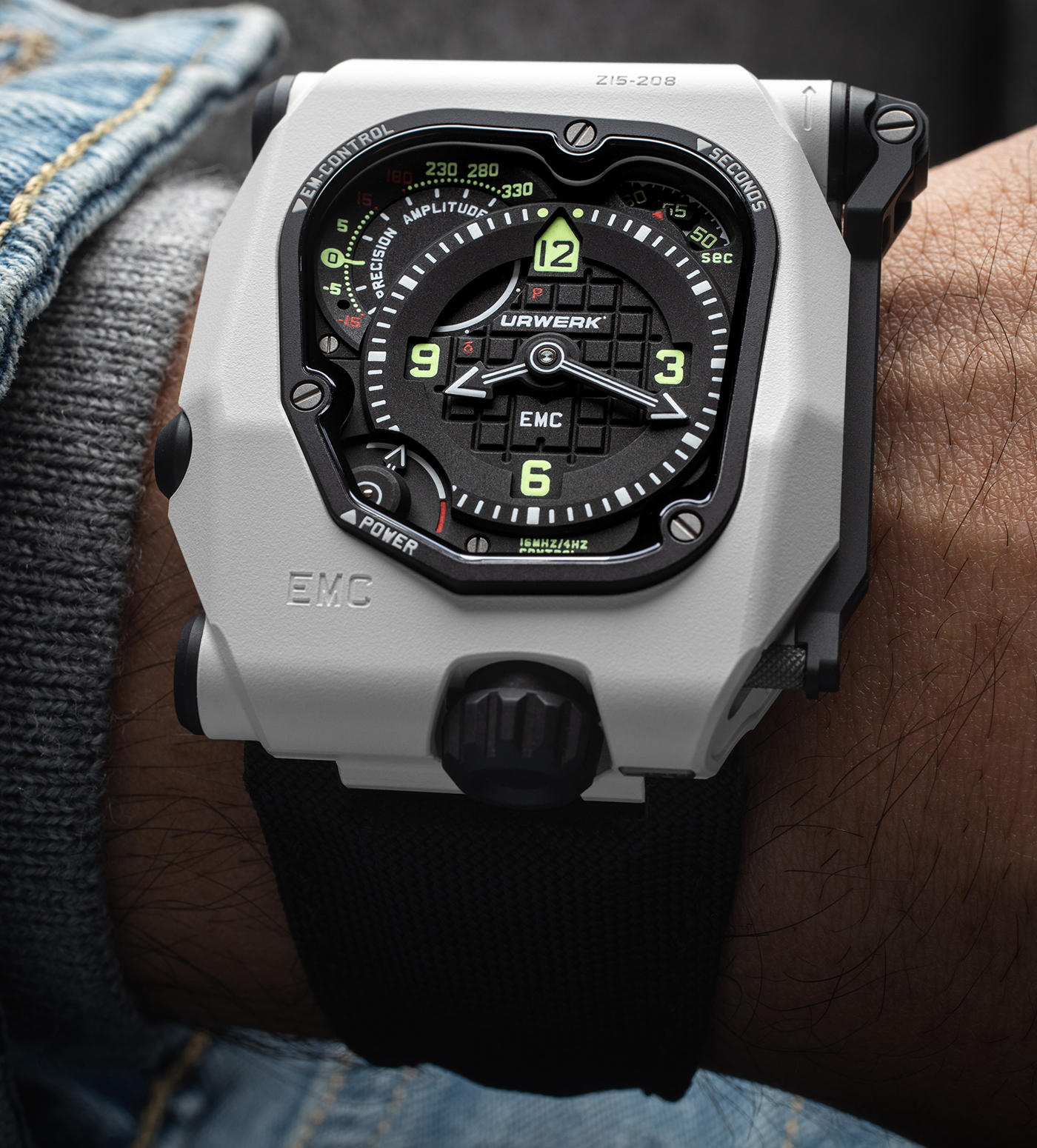 Like previous versions of the EMC TimeHunter line, the Urwerk EMC TimeHunter Stormtrooper sports an asymmetrical, angular, and vaguely militaristic case design measuring in at 43mm by 51mm. Crafted from a mix of lightweight Grade 5 titanium and stainless steel with a bead blasted ceramic lacquer finish, the EMC TimeHunter Stormtrooper sets itself apart from its predecessors with its stark “Star Wars” inspired white on black color scheme. In initial images, this new monochromatic treatment serves to emphasize the futuristic, almost alien quality of the form while remaining rugged and functional. The knobby, oversized 6 o’clock crown and the signature folding electrical charging crank along the 3 o’clock side of the case remain clear visual highlights, while the miniscule 30 meter water resistance rating continues to undermine the rugged, military associations of the design. 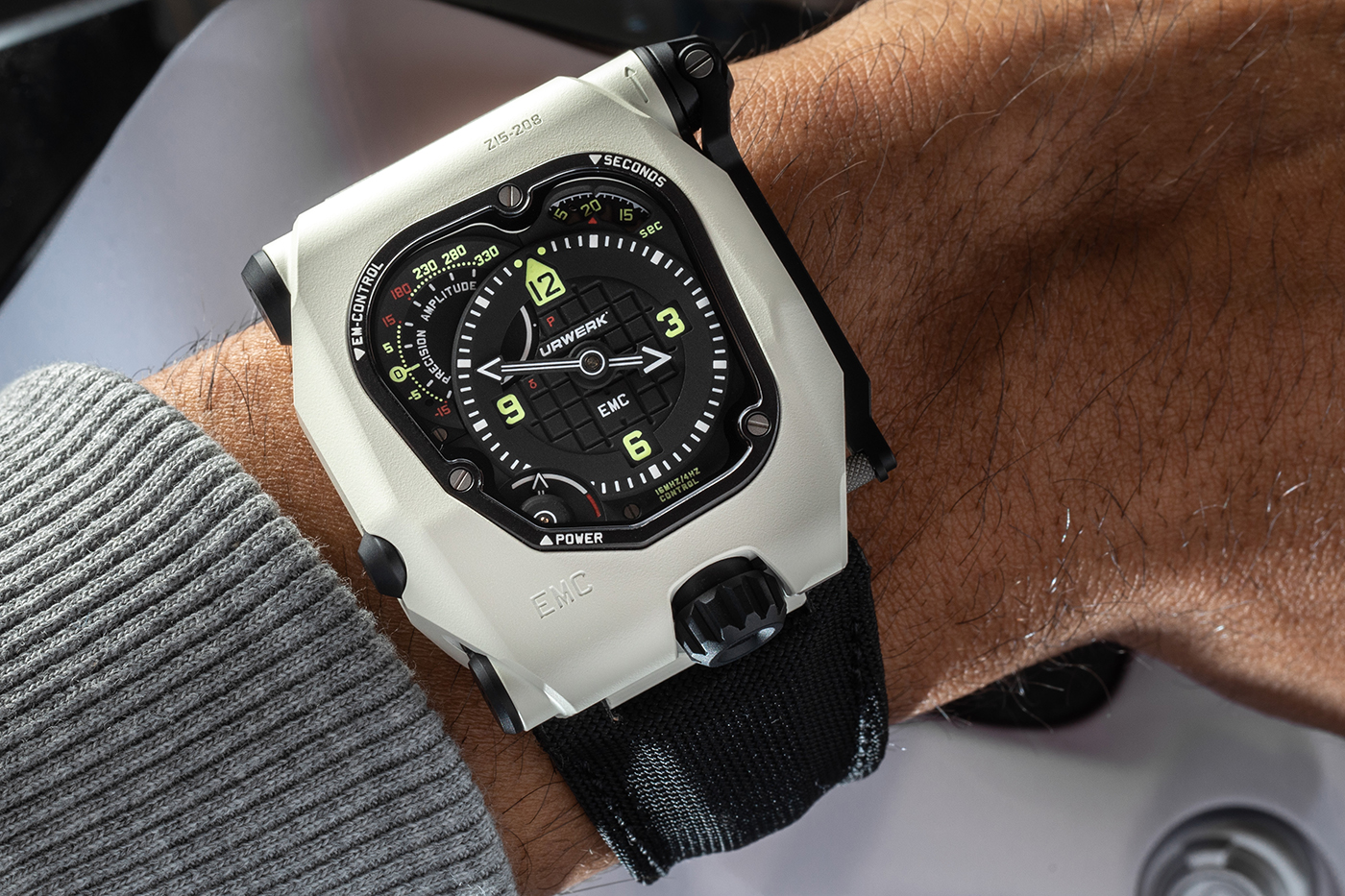 In order to maintain the brutal Imperial inspired look of the overall design, the dial of the Urwerk EMC TimeHunter Stormtrooper eschews the multicolored skeleton treatment of some previous models in favor of a simpler black approach. Despite the reduction in visual complexity, this dial layout is still bursting with personality, from the deep mega tapisserie pattern of the main dial surface to the unorthodox lume application on the arrow hands. The subdials surrounding this main timekeeping surface are equally distinctive, from the running seconds disk at 1 o’clock to the 7 o’clock power reserve, but the most dramatic element is the unusual subdial at 11 o’clock. This unique readout ties in directly to the EMC TimeHunter Stormtrooper’s electronic Electro Mechanical Control, or EMC system. The dual purpose display allows wearers to quickly check both the daily rate deviation of the movement from +15 to -15 seconds per day, along with the current movement amplitude which can be an early indicator of wear or damage. It’s fantastically esoteric information, but it gives a direct and tangible connection between mechanical movement and wearer in a novel way. 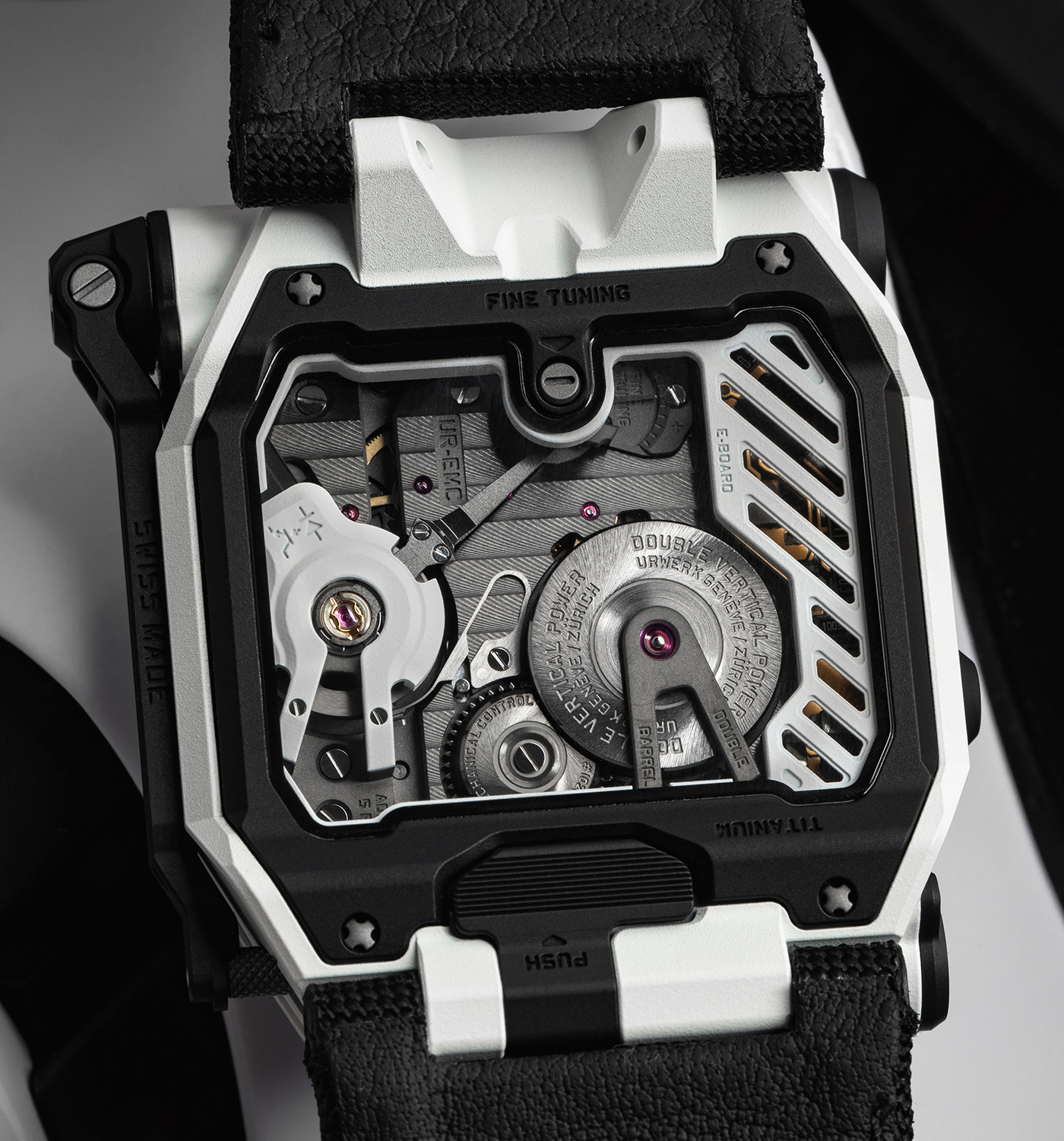 Unlike the infamously poor “Star Wars” marksmen that inspired it, the Urwerk EMC TimeHunter Stormtrooper is fanatical about accuracy, and this dedication to performance is reflected in the in-house Calibre UR-EMC2 handwound mechanical movement. While the base mechanical movement itself is complex, boasting a proprietary ARCAP balance along with series coupled twin vertical mainspring bezels that allow a hefty 80 hour power reserve at a 28,800 bph beat rate, the traditional mechanical component is only half the story. Urwerk integrates this movement with its unique EMC module to allow wearers to easily check movement accuracy and health on the fly. By using the large retractable crank lever recessed into the case side, wearers can charge a miniaturized magneto that powers a tiny electronic control circuit. This circuit runs to a laser diode and sensor array aimed at the balance wheel, measuring the rate deviation and amplitude and comparing them to an internal 16MHz microprocessor which serves as a benchmark. Beyond giving wearers access to this in-depth information on the fly, Urwerk makes the movement easily adjustable on the fly as well. A timing adjustment screw on the caseback allows wearers to finely adjust the length of the balance spring at will to maintain accuracy. Urwerk finishes the EMC TimeHunter Stormtrooper with an integrated woven fabric strap in contrasting black. 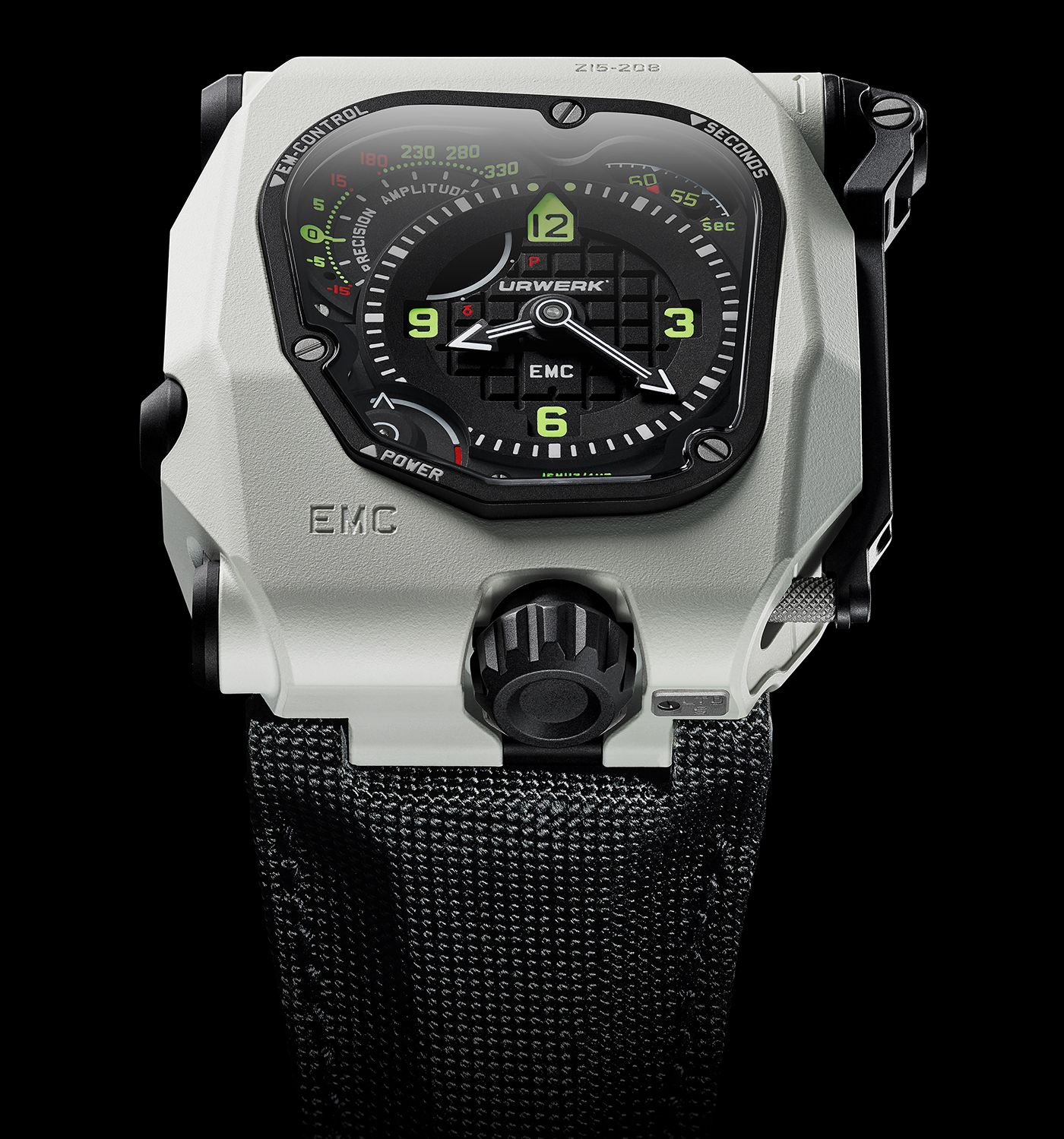 While the unorthodox design and stark “Star Wars” inspired colorway may not be to everyone’s taste, the limited edition Urwerk EMC TimeHunter Stormtrooper stands as one of the most engaging and technically dynamic designs in the current haute horlogerie market. Only five examples of the Urwerk EMC TimeHunter Stormtrooper will be made, available now through authorized dealers at an MSRP of 115,000 CHF. For more details, please visit the brand’s website.