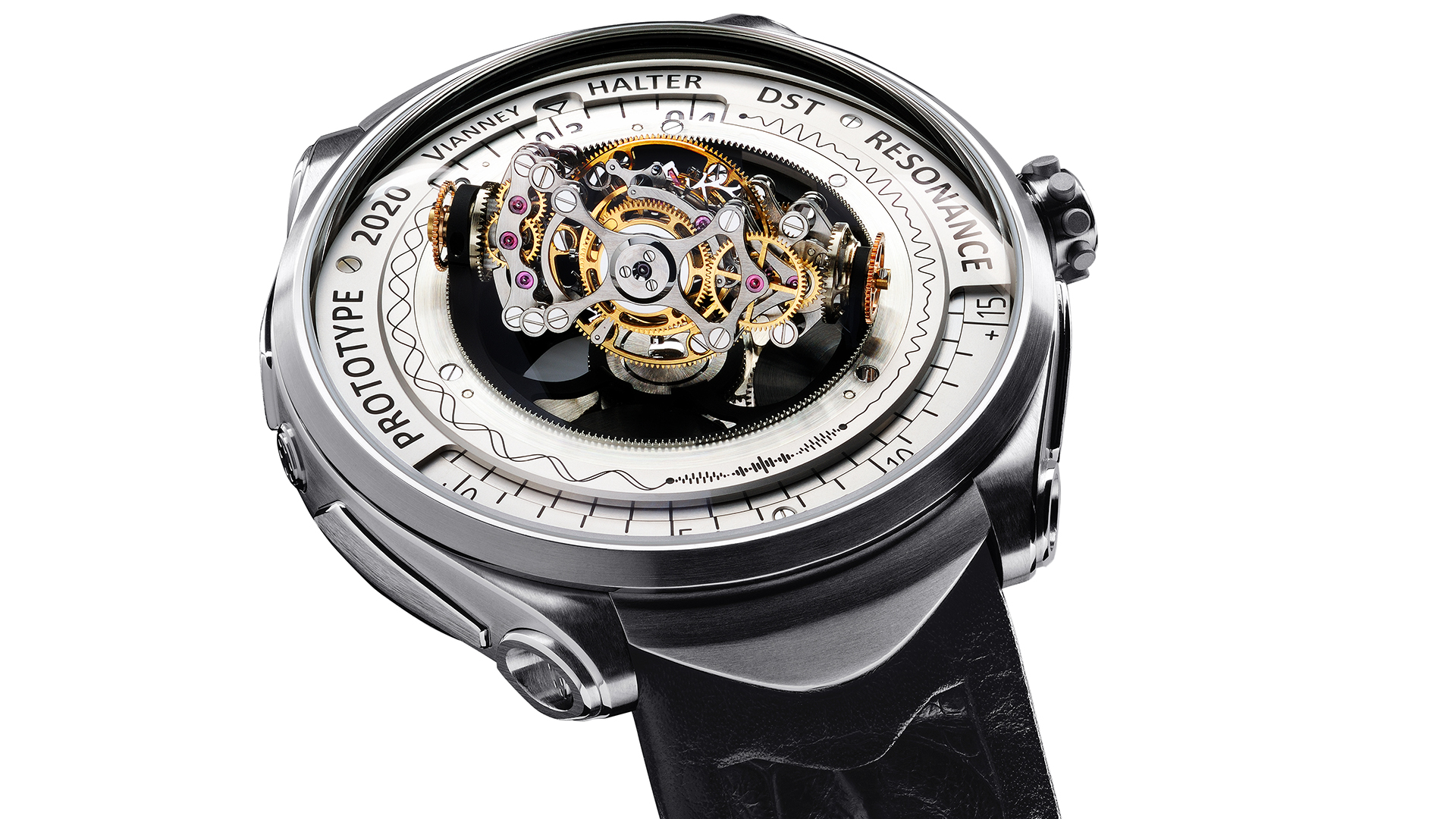 The acoustic resonance effect is one of the most complex and esoteric phenomena in horology, but in the right circumstances, its results can be enthralling. In essence, when two oscillating objects are placed close enough to one another (for example the tines of a tuning fork or two balance wheels), their oscillations will begin to interfere until they reach synchronization. This synchronization effect can take on many patterns, but all of them can aid in the overall accuracy of a timepiece. Boutique haute horlogerie brand Vianney Halter has harnessed the acoustic resonance effect for the first time in a wristwatch, pairing the delicate twin balance setup alongside its intricate three-axis tourbillon design. While not entirely finalized for production, the Vianney Halter Deep Space Resonance Prototype is a spectacular showcase of truly bleeding edge mechanical watchmaking, providing engineering innovation and visual spectacle in equal measure. 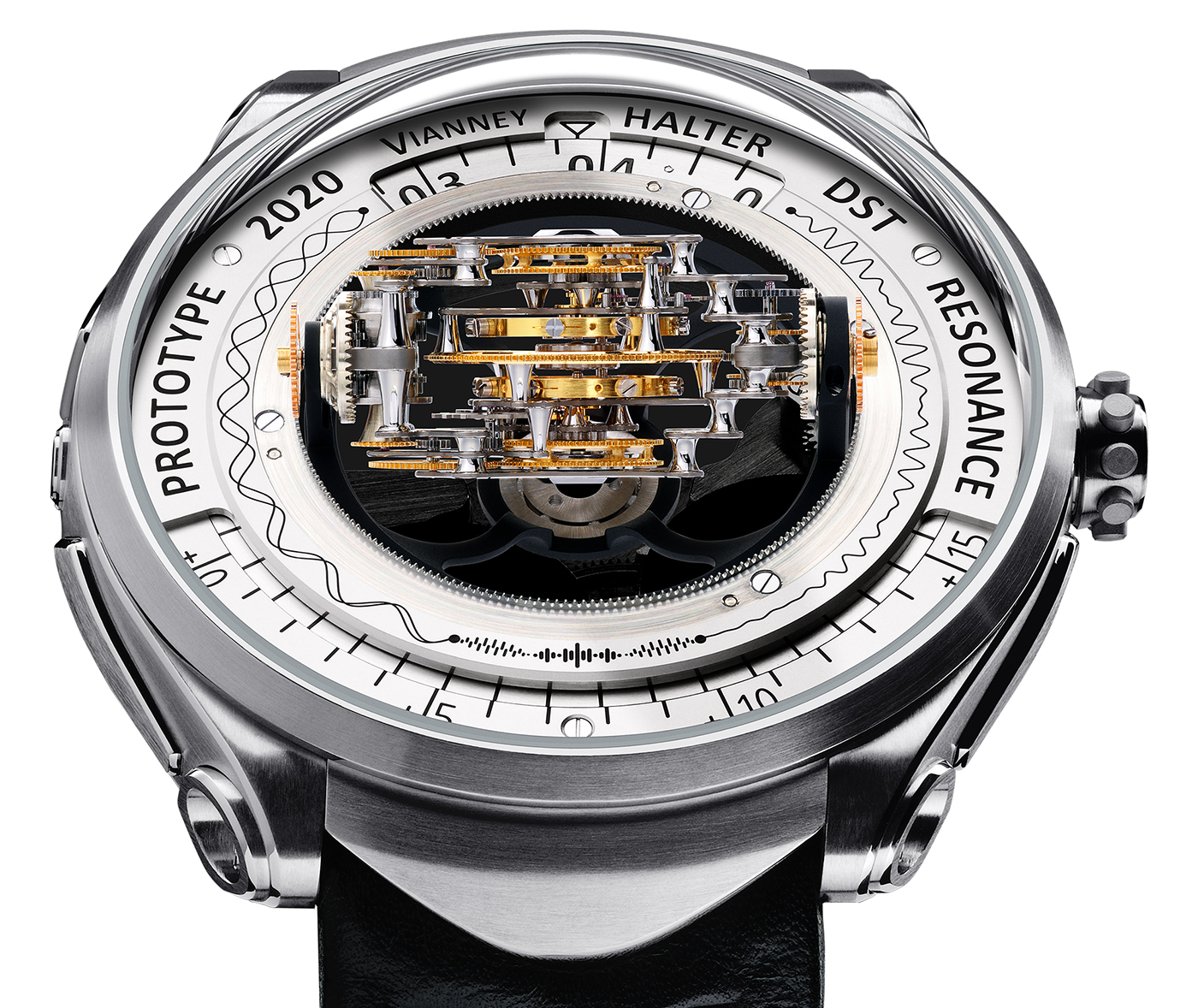 While the 46mm titanium case of the Vianney Halter Deep Space Resonance Prototype is overshadowed by the innovative horology inside, there are interesting design cues sprinkled throughout. From above, the form is mostly a traditional sports watch, with a brushed narrow smooth bezel and wide, rapidly tapering lugs. Even from this angle, however, the crown stands out, with its unusual raised circular pattern along the edge. From the case sides, however, the real extent of the finishing comes into play, with unique trapezoidal segments in raised relief with polished chamfers to break up the visual bulk of the brushed case sides, along with oversized raised ovals capping the lugs. With the hyperbolic domed sapphire crystal, overall thickness stands at 20mm. 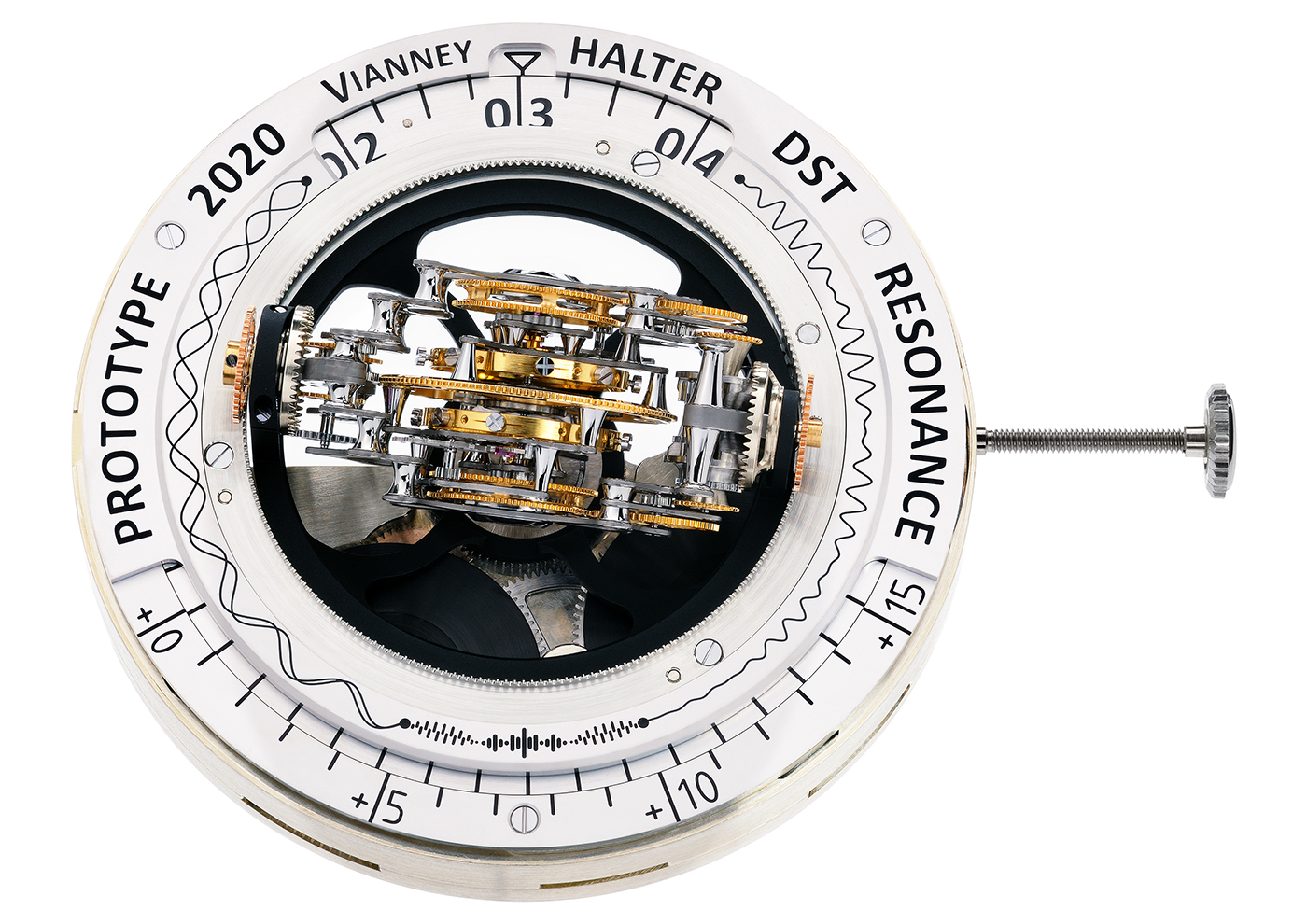 The skeleton dial of the Vianney Halter Deep Space Resonance Prototype is more or less an outer ring surrounding the movement, but this ring contains quite a bit of visual detail. The main hours display is at 12 o’clock, where a pointer marks the time on a rotating inner ring, while the minuted in between each 15-minute interval are tracked by a marker at 6 o’clock. The overall look is function first, inspired by a Vernier caliper, but with a playful waveform, pattern emulating the acoustic resonance effect that feeds directly into the 6 o’clock indicator. While this design has a certain charm it’s worth noting that production models of the Deep Space Resonance will have a substantially reworked dial that, according to the brand, will directly match the movement’s resonance principles. 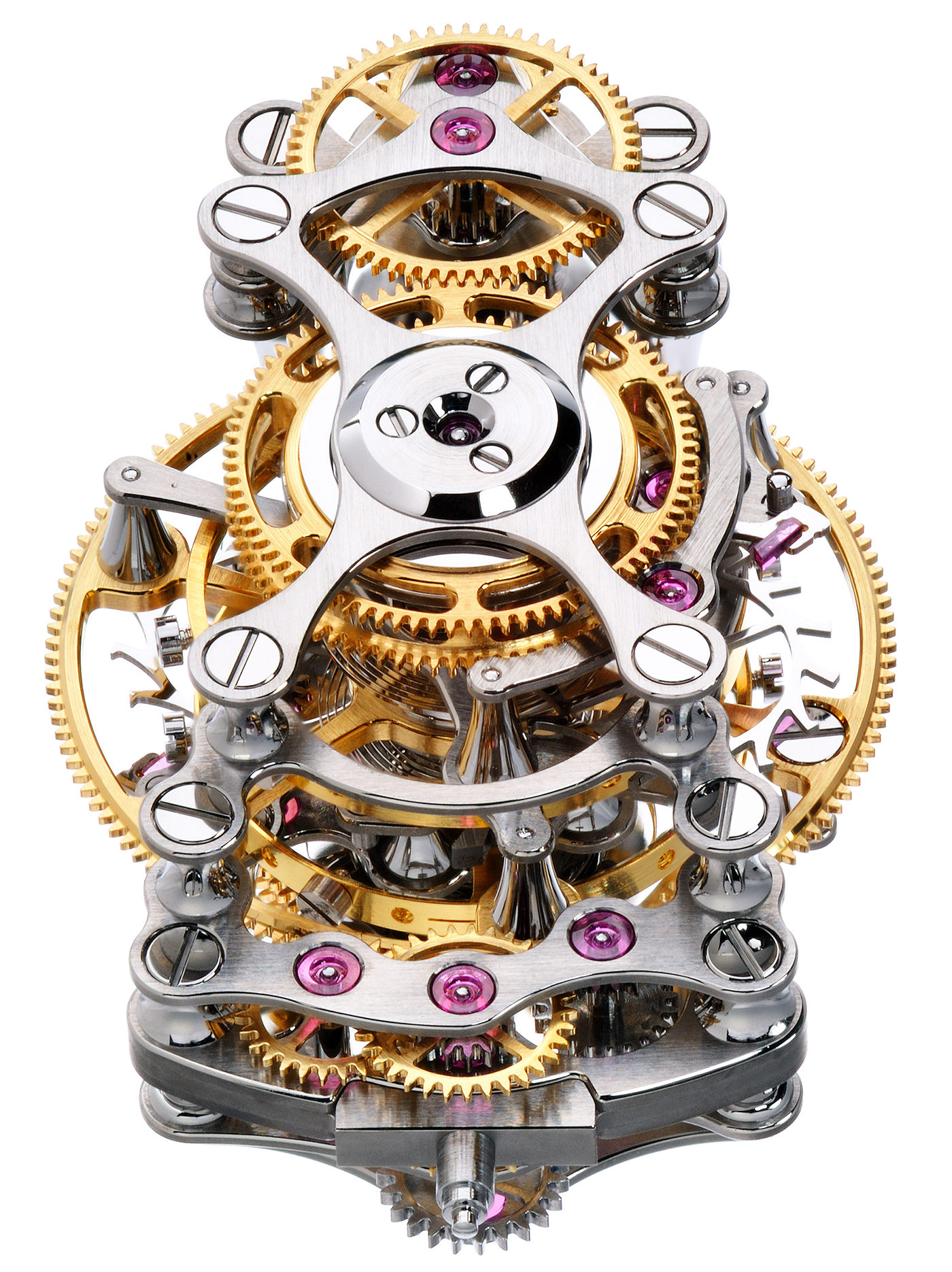 Without a doubt, the centerpiece of the Vianney Halter Deep Space Resonance Prototype is the in-house VH 113 hand-wound movement. The namesake element of this new movement, of course, is the paired set of balance wheels attached by a shared bridge. This proximity and the solid base allows for a consistent, predictable acoustic resonance effect between the two, allowing the two balances to vibrate at a beat rate of 21,600 bph. While these two balances synchronize almost immediately after the mainspring has enough energy to start the watch, the position the balances are in at the beginning can change the mode of synchronization – meaning, under certain circumstances, the two balance wheels may be synchronized at the exact same frequency but counterrotating in opposite directions. This phenomenon is given extra variety by its attachment to the three-axis rotating tourbillon. The innermost tourbillon cage, operating like a standard tourbillon, makes a full rotation every 60 seconds but is further turned in a full traverse rotation every six minutes, while the outermost cradle containing the entire assembly makes a rotation along the vertical axis every 30 minutes. Power reserve stands at 65 hours, but the brand promises a substantially larger reserve for final production models. While the mechanical spectacles of acoustic resonance and a three-axis rotating tourbillon are dramatic on their own, Vianney Halter adds extensive skeletonization and decoration, including 42 hand polished curving pillars supporting the bridges inspired by the legendary 1939 marine chronometer by Achille Benoît. 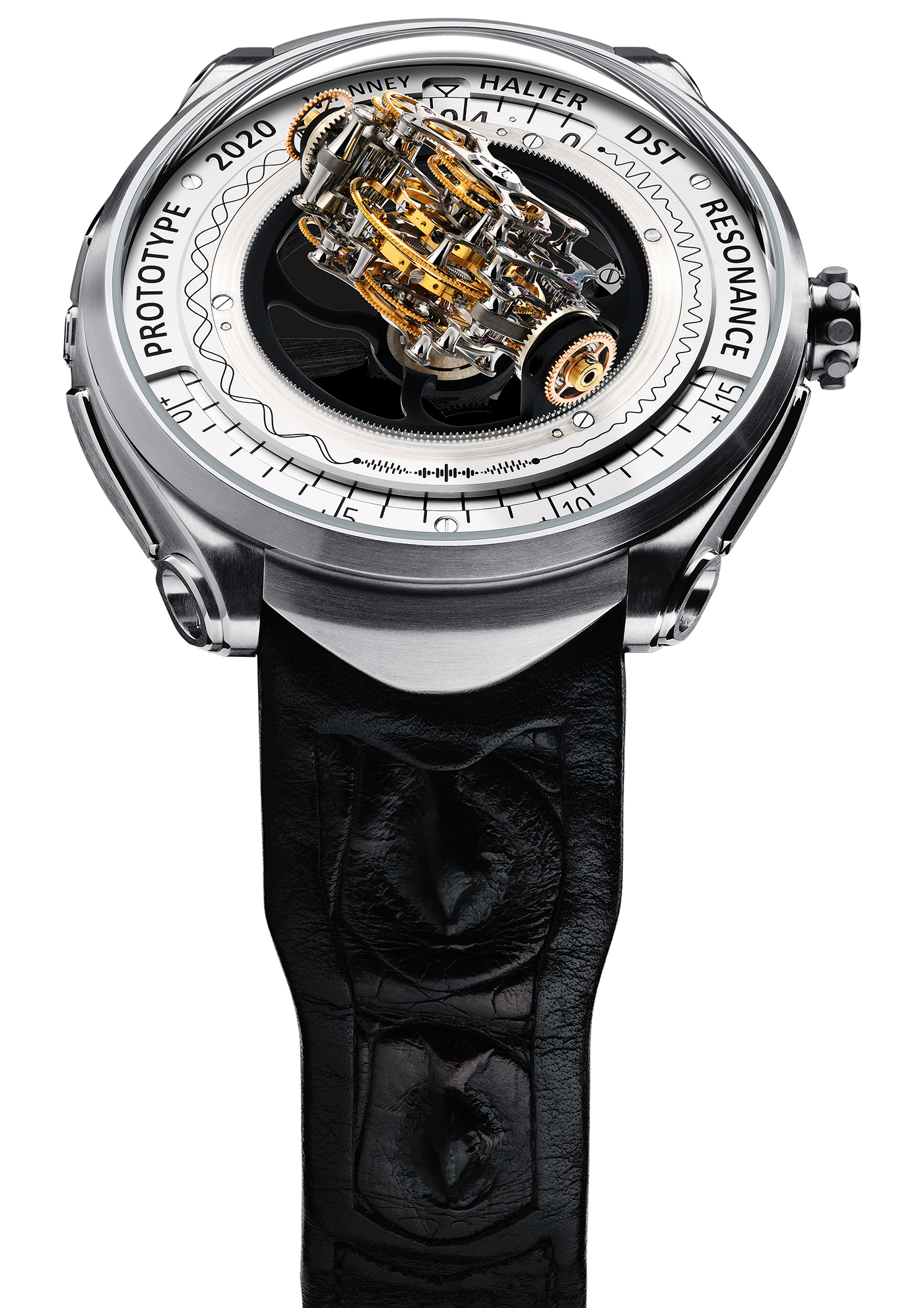 Vianney Halter finishes the Deep Space Resonance Prototype with a black Hornback alligator leather strap, flowing directly into the unique pointed semi-hooded lugs for a somewhat integrated look. The strap demonstrates cutouts for added visual depth, along with a slightly inelegant bottleneck taper midway between the case and the buckle. 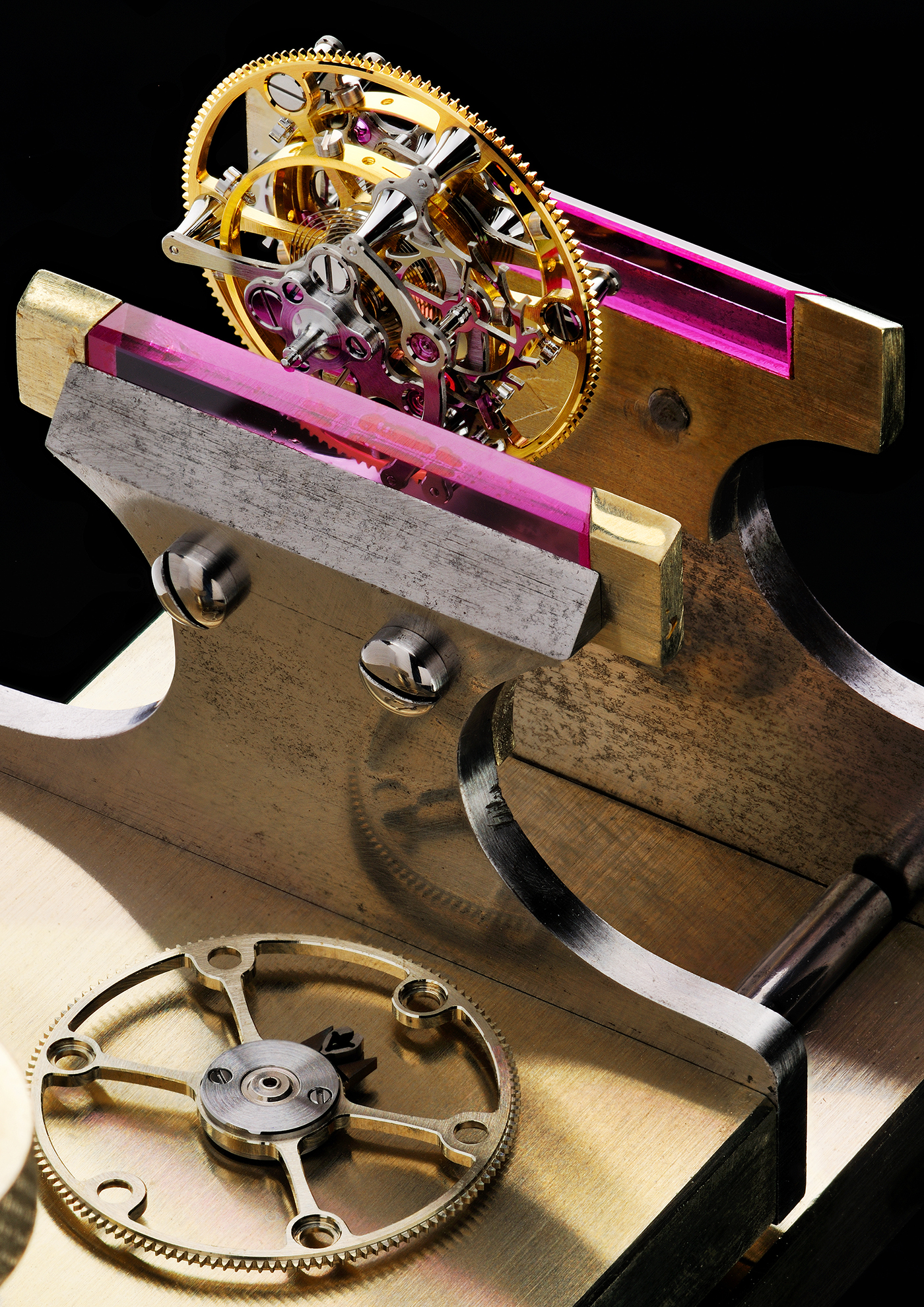