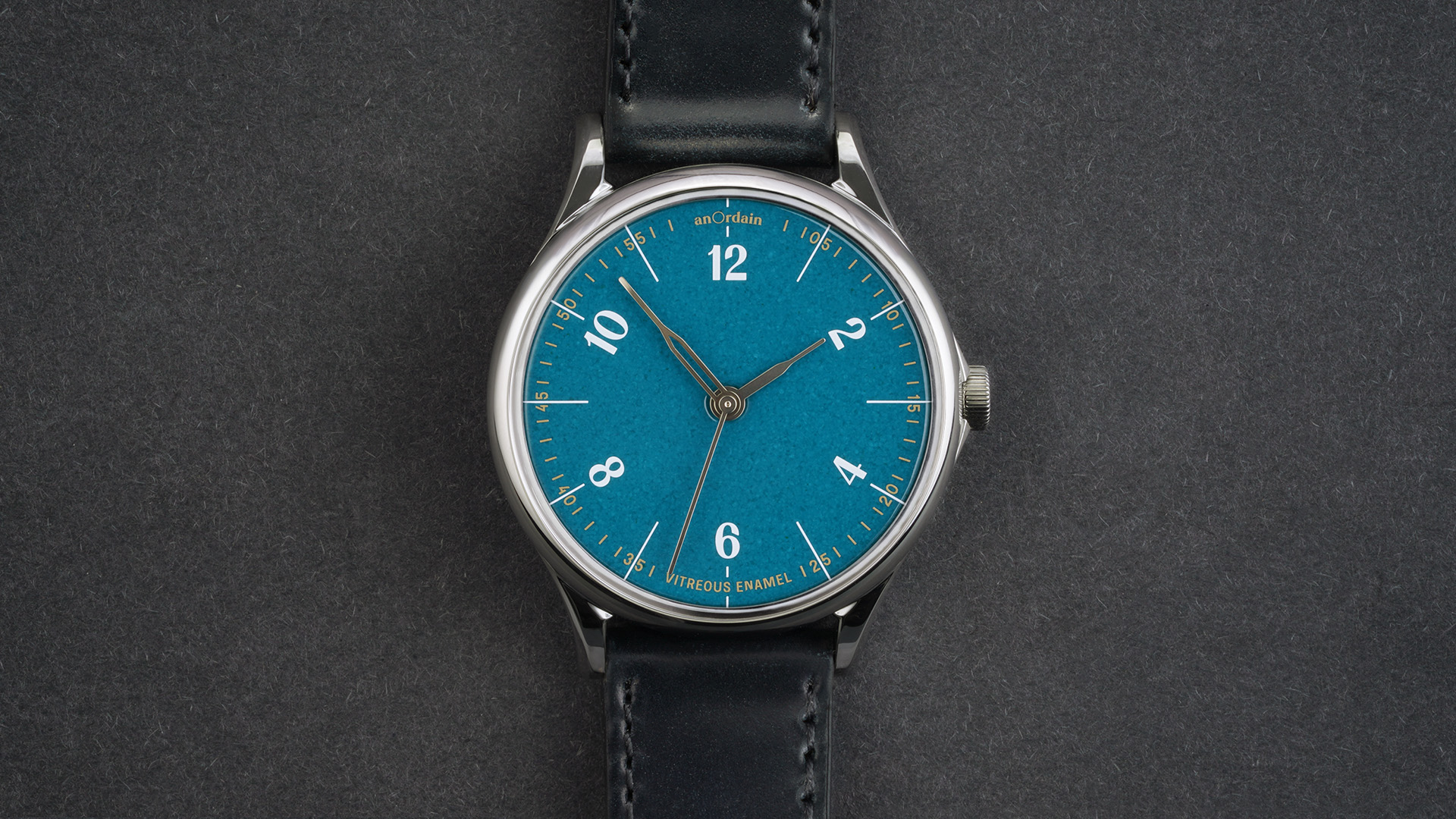 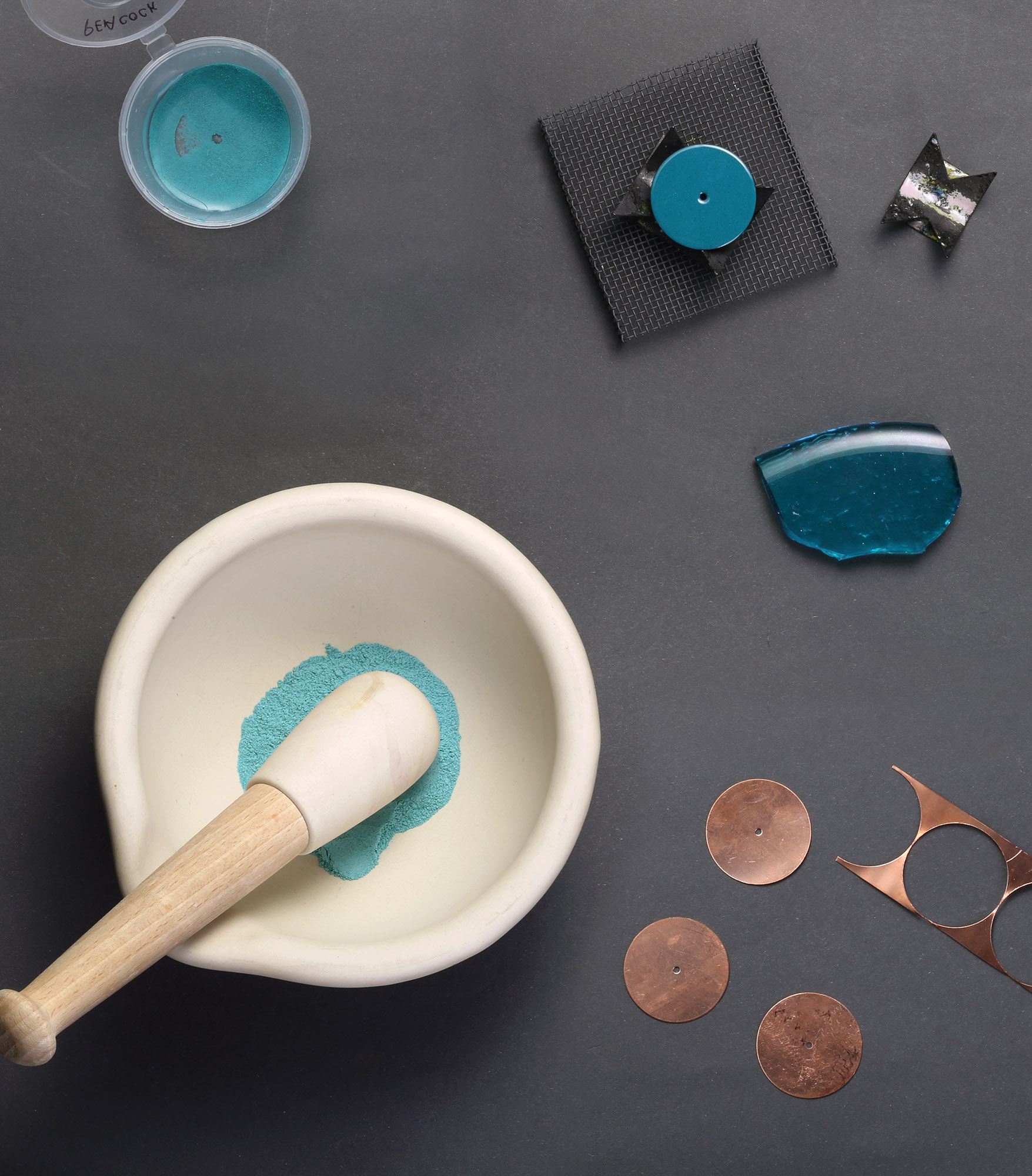 Colored dials are having a moment. Hues of all kinds are appearing on mechanical watch faces more than ever before, whether from large conglomerates or small independents. For anOrdain, the upstart Scotland-based watchmaker, radiant enamel dials not only aren’t a fad, but they’re also the key to the brand’s popularity and success. Founded in Glasgow in 2015, anOrdain’s foray into colorful enamel dial work is unusual since it’s historically been the jurisdiction of a select few Swiss brands. 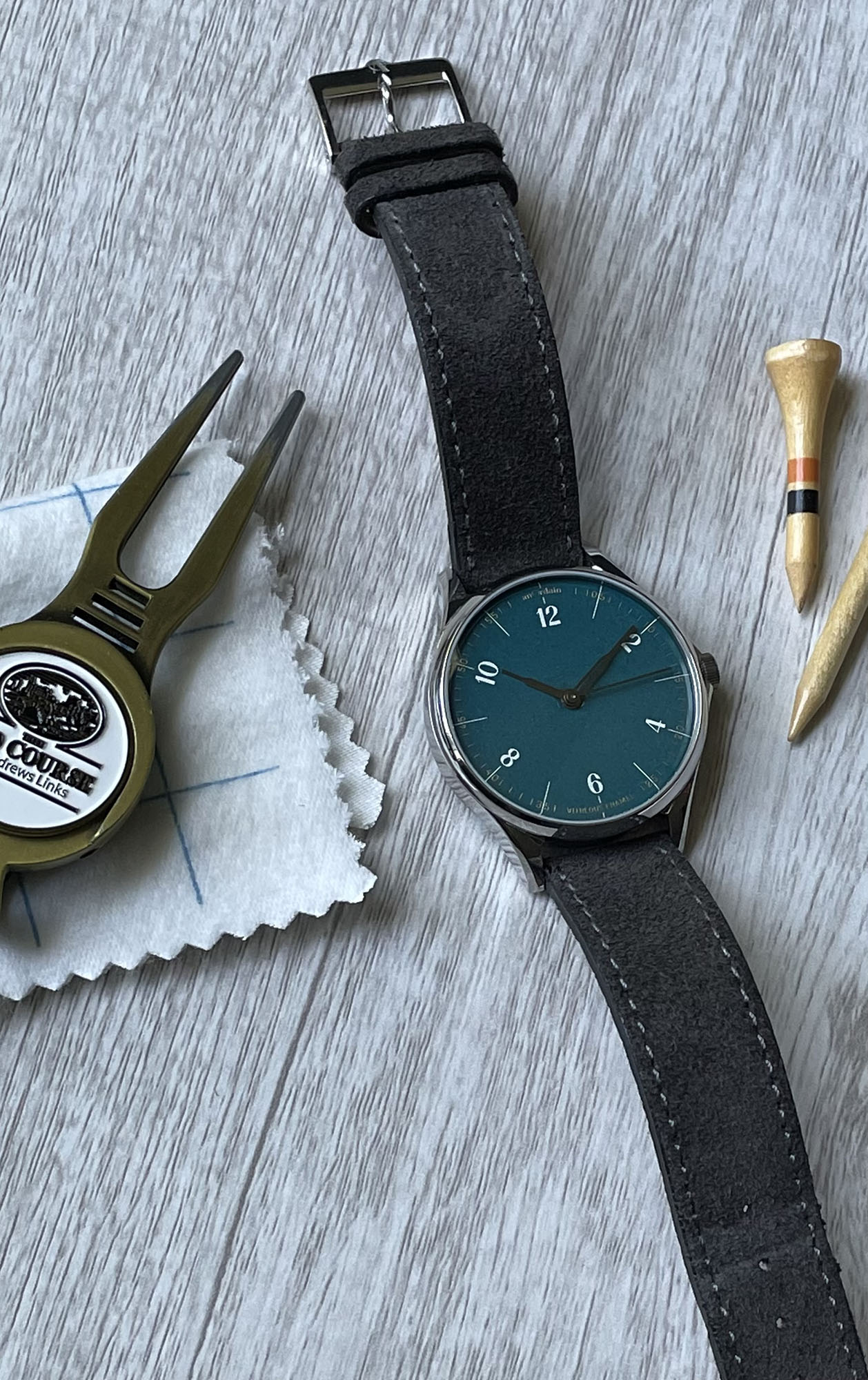 anOrdain came across my radar in 2020, and I purchased the Model 1 teal dial prior to a planned trip to Scotland, during which I intended to visit the brand’s offices. The pandemic scuttled those plans and caused multiple cancellations before I was finally able to make the journey this Spring. Both the country and the watch inspired this review.

Vitreous or grand feu enamel is the process anOrdain uses to craft its dials, building layer upon layer of enamel powder heated at up to 800 degrees Celsius. Enamel dials have a richness and depth not found in traditional colored watch faces.  It takes 12 hours to complete one anOrdain dial, and it’s originally cut as a flat disc from a copper sheet. Yet, in viewing the finished product, the center of the watch face reveals a slight depression, simulating the appearance of a funnel to the movement below. It gives the illusion that should one remove the syringe-style hands, the rich color of the dial will swirl down in whirlpool fashion and vanish without a trace. 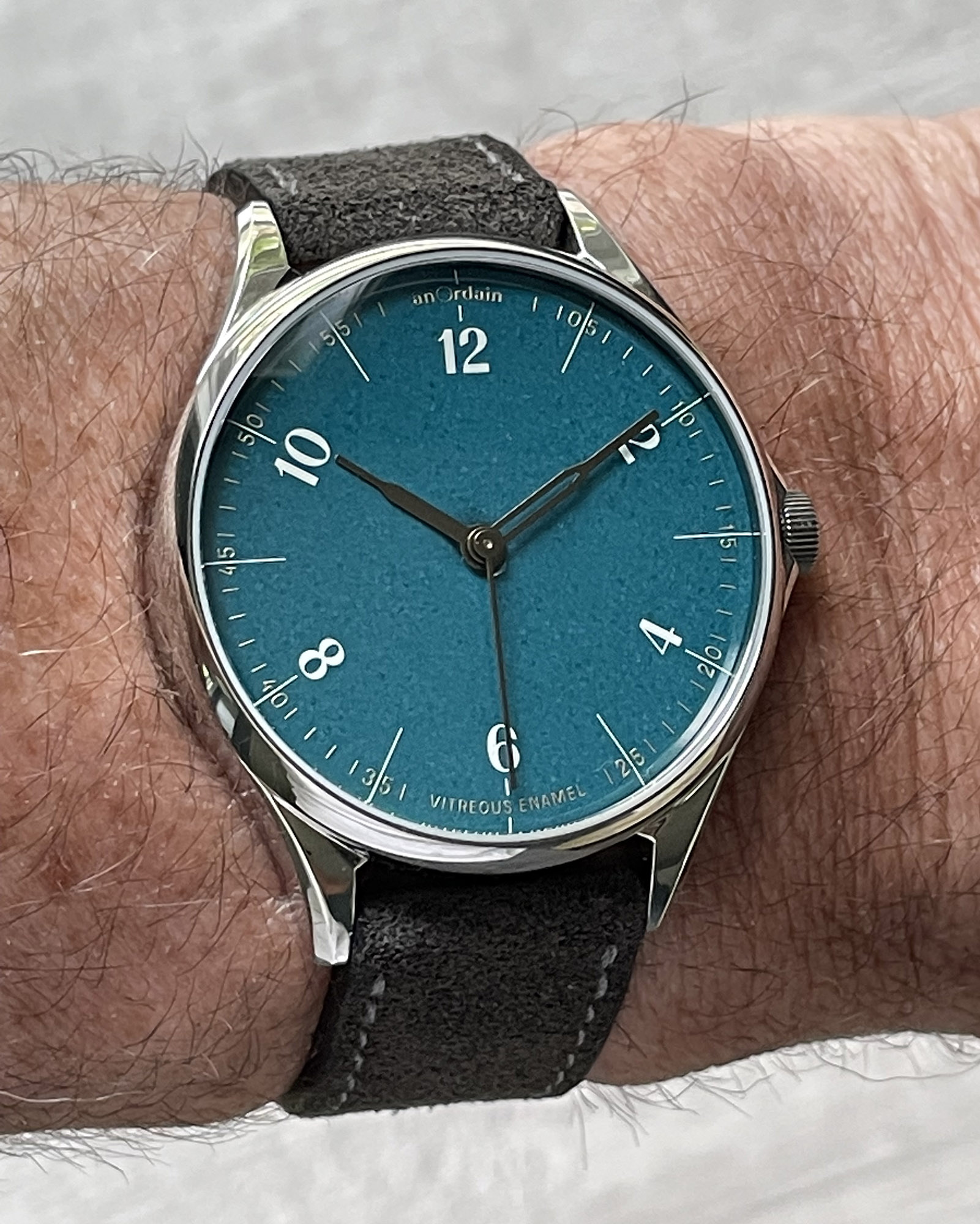 This Model 1 checks in at 38mm, though it’s also available in 35mm and 41mm case sizes. The dial is inspired by the colors of the Eurasian teal duck, and here, it’s smartly matched with a gray suede strap.  The watch wears larger than that, even with the properly proportioned 18mm strap. The 46mm lug-to-lug distance fits snugly on my 7.25” wrist, and while the case thickness of only 11mm could start to dabble into a dress watch territory, its subdued flair allows it to work best with dress casual or sportier clothing. It’s bright without being flashy.  Yet one downside to all this color and depth is the glossy nature of the finished product.  Though the sapphire crystal contains multiple layers of anti-reflective coating, the brilliance of the dial tends to make the watch somewhat difficult to view without glare. 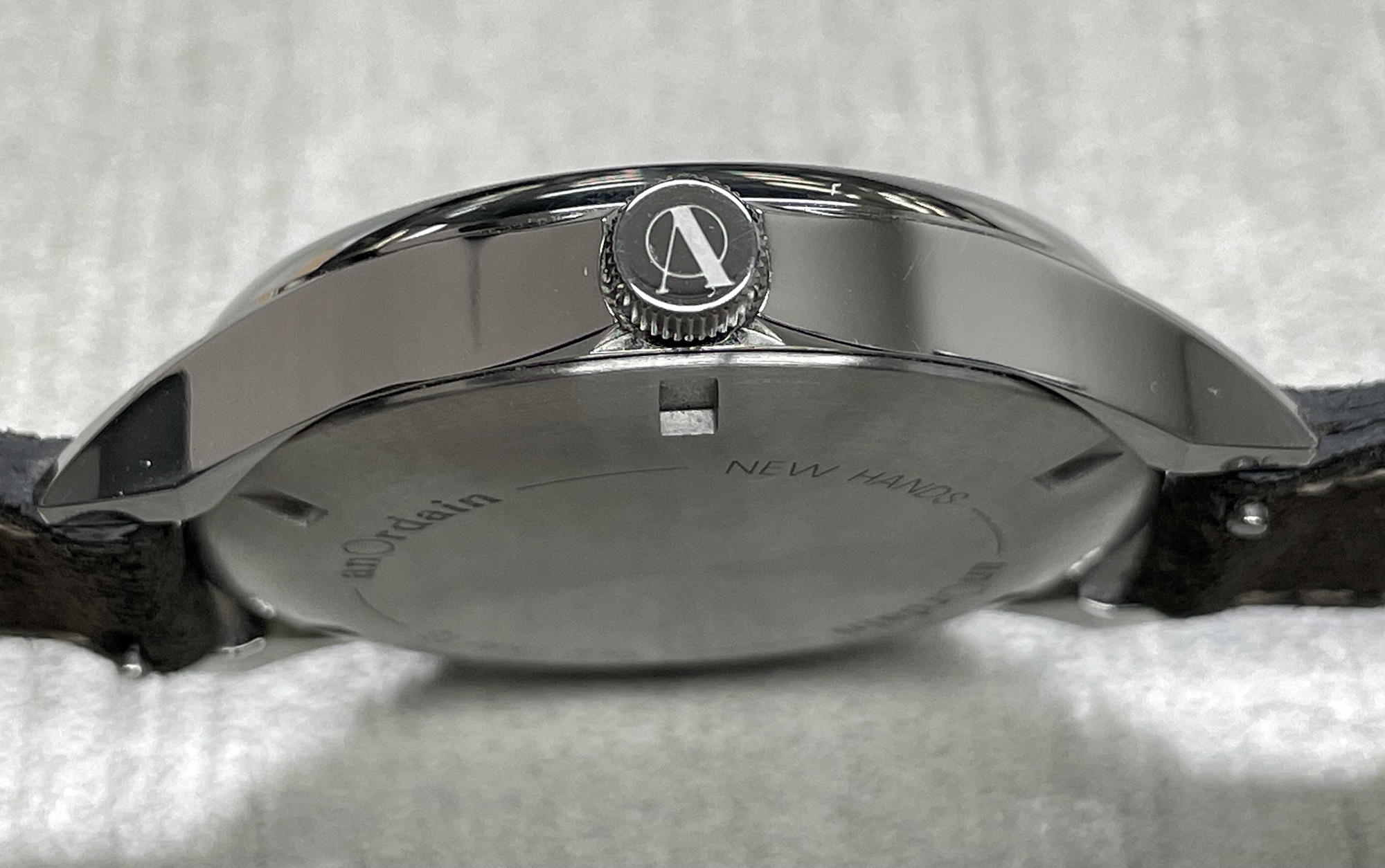 The watch is very well balanced on the wrist and avoids the dreaded feeling of fatigue that can occur with clunky cases that outweigh the overall design of the piece.  It’s certainly comfortable enough to be a daily wear, but if not, then the La Joux-Perret movement will provide a power reserve of up to 68 hours. The dial’s even-numbered Arabic numerals and indices are inspired by historic cartographic maps of the Scottish Highlands, where anOrdain founder Lewis Heath grew up fishing with his Dad in Loch an Ordain.  For those who haven’t grown up amidst Scotland’s many bodies of water, a “loch an” is a small loch (and often hard to find on Google searches). For newer watch companies, a strategy of embracing modernity while still acknowledging the past is one way to gain a foothold among consumers faced with so many watch-buying choices. 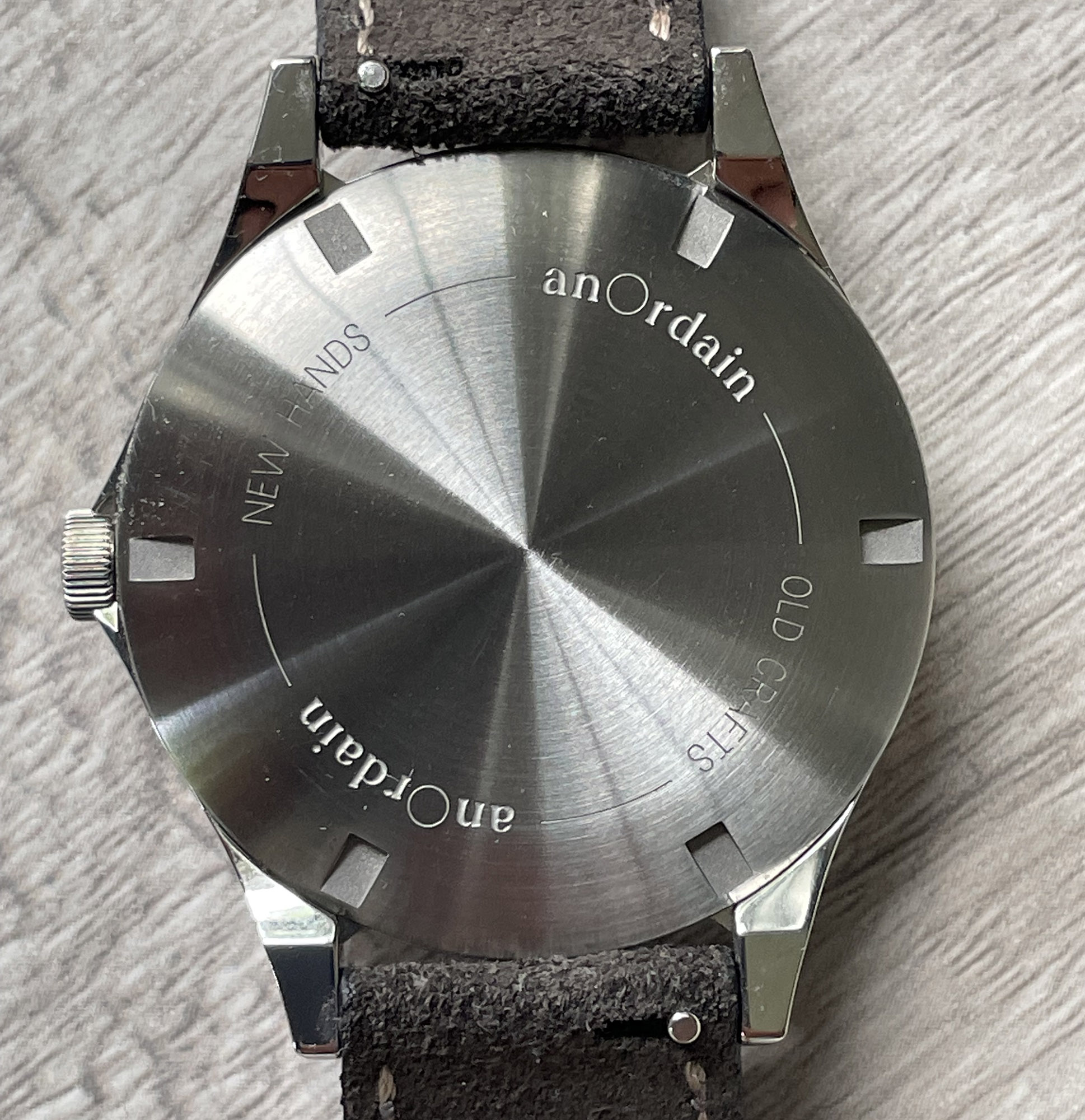 Each Model 1 is almost completely customizable. Options are certainly plentiful, possibly a tip of the cap to the younger portion of the brand’s customer base. In addition to the three case size choices, there are eight color choices, at least five strap varieties, and even three different movements from which to choose. Automatic fans can decide between the Sellita SW200 or the La Joux-Perret G100, while those preferring a manual-wind can go with a Sellita SW210. 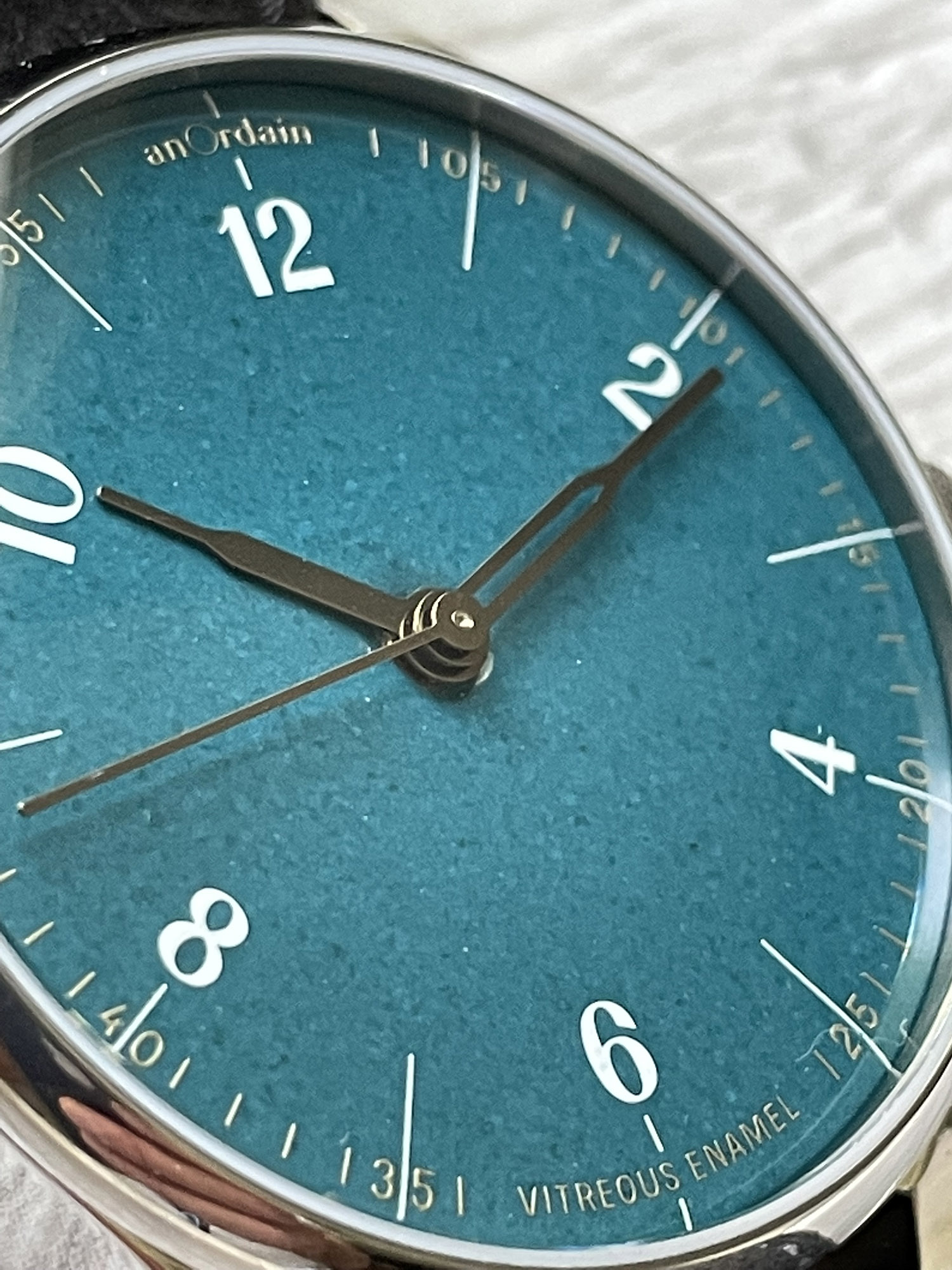 Colorful enamel dials are generally found at much higher price points from such well-known Swiss luxury brands as Breguet, Jaeger-LeCoultre, and Ulysse Nardin. But if you’re searching for enamel dials under $5,000, there are other interesting possibilities. The Swiss brand Lundis Bleus is probably the closest answer to what anOrdain is doing, but its annual production is much lower. Seiko’s Presage line released a blue enamel dial in recent years, and it also included white enamel and porcelain varieties. Lastly, the Ball Trainmaster Standard Time features the company’s in-house movement to go along with a white enamel dial, but there aren’t other colors available from the brand. 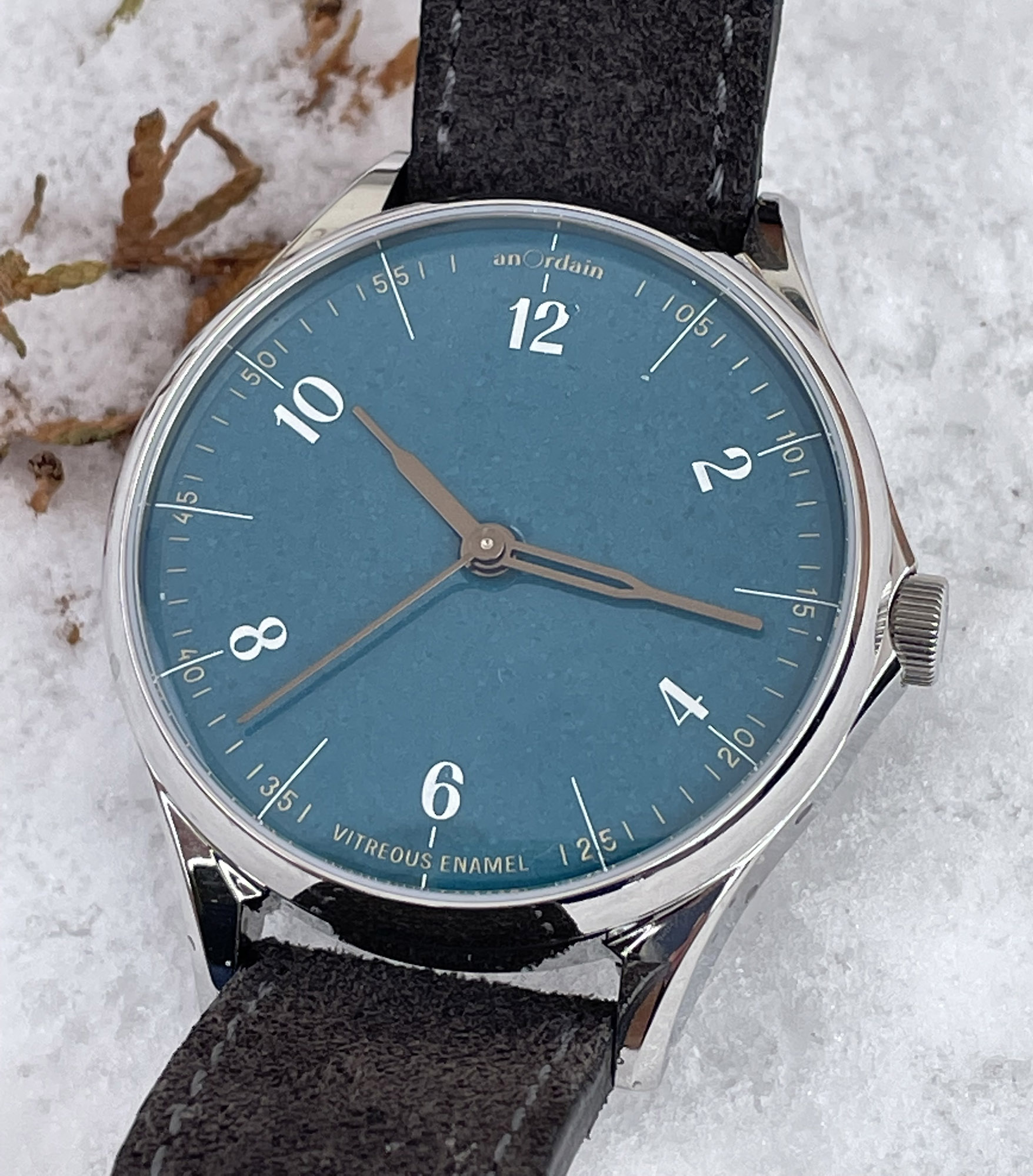 A recent conversation with Erlend Firth, anOrdain’s Workshop Manager, revealed that the success rate of making these highly complex dials improves with experience. But even the best of the best still see a fair number of failures. New enamelers have come on board, but at the moment, the company is still limited to making approximately 40 dials per month. Historically, the watch manufacturing business has been older and male, but anOrdain bucks that trend by skewing young and fielding a 50/50 gender split on its staff of 18. 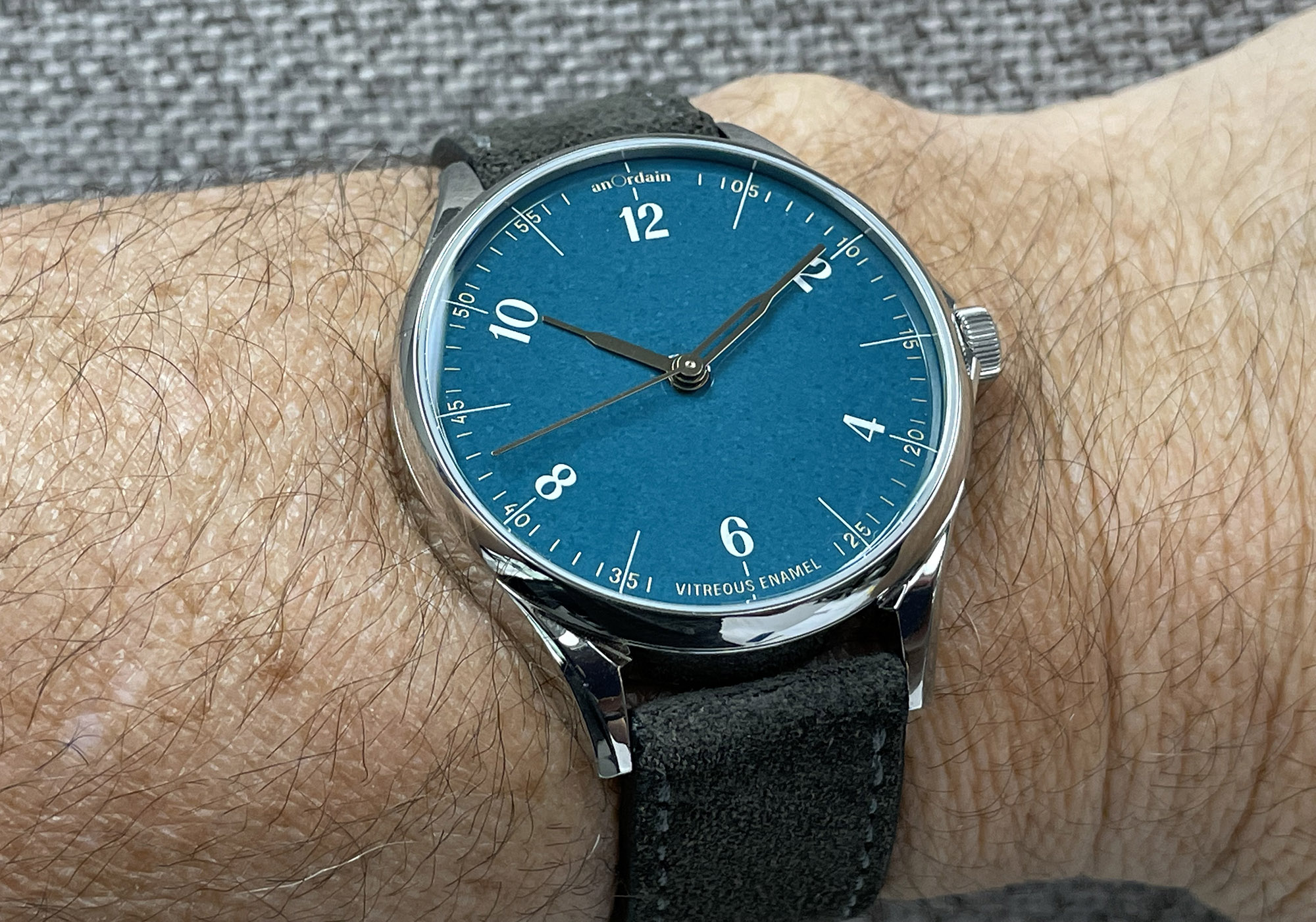 All of the positives emanating from the company, along with the recent strong surge in mechanical watch interest, in general, have caused a quandary. Two years ago, a four-to-six-week lead time was standard. But by late 2021, a waitlist was instated, and the most recent signups are now looking at an over two-year wait for their turn. This is quite a long time in the modern world, where instant gratification is often a requirement for the buying public.  The company is pledging to provide a timeframe to those on the list and will tie it into a small deposit requirement to determine who is truly “in” and who is just kicking the tires. 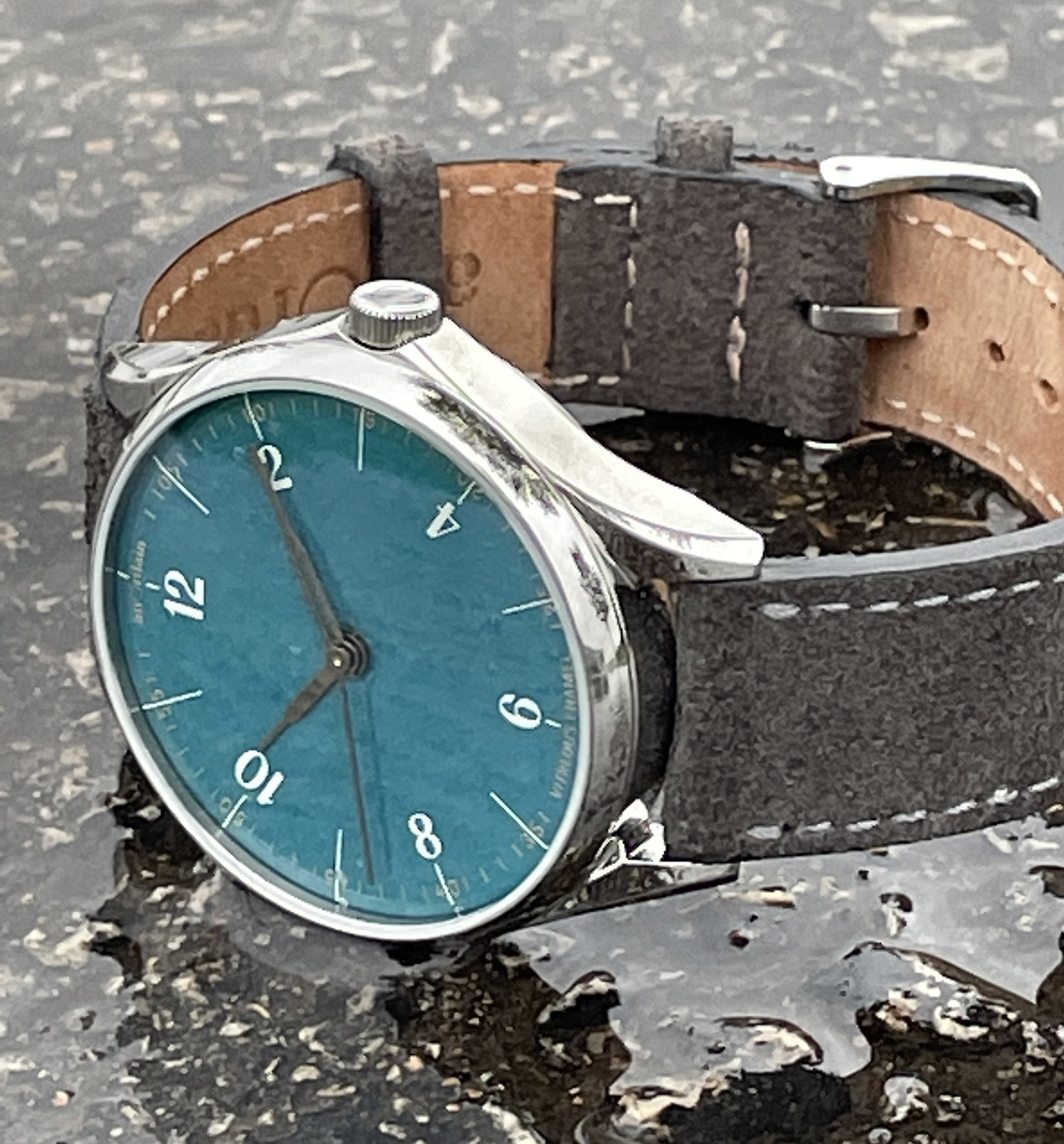 The anOrdain Model 1 fills a niche in the overall mechanical watch marketplace. Its pieces are fun, reasonably priced for their highly technical processes, and stylish without looking like a short-lived fad. There are options for all wrist sizes and personal tastes, and the only real downside is the current lack of immediate availability. As of press time, the price of the Model 1 ranges from 1600 to 1850 GBP, depending upon case size.  Want to learn more?  Visit anOrdain’s website here.