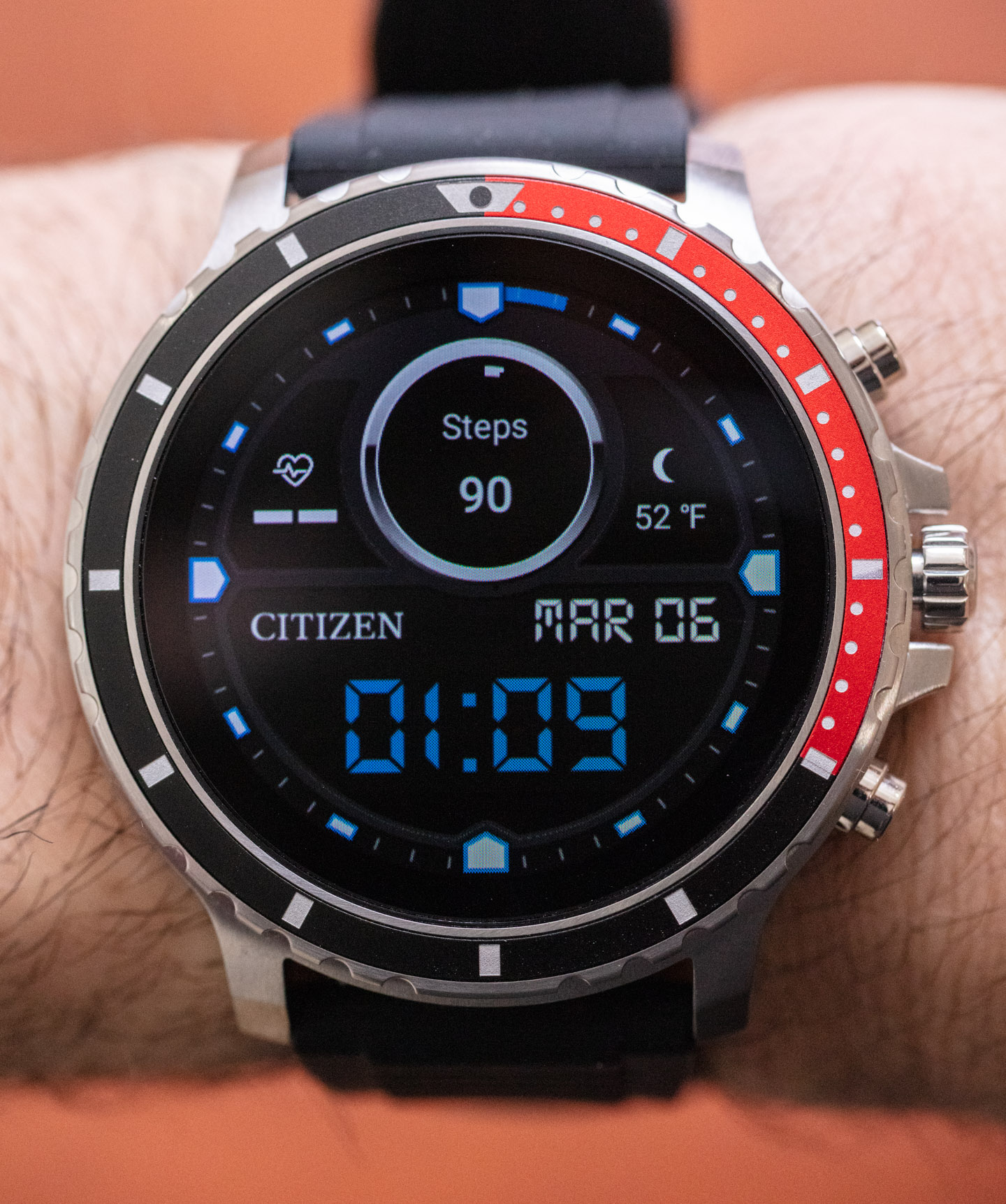 In 2020, Japan’s Citizen watch company officially entered the smartwatch race with the release of the Citizen CZ Smart collection of products powered by Google’s Wear OS (operating system). Citizen has actually been early to the smart(er) watch game, and back in 2012, it debuted the Citizen Proximity (aBlogtoWatch review here) watch that attempted to meld the world of Citizen’s light-powered Eco-Drive watches with a Bluetooth-enabled phone connection that offered on-dial phone notifications. The CZ Smart is however an entirely different product.

In this smartwatch-maker role, Citizen takes a backseat in some areas that it has traditional expertise, and offers what it knows best (case and hardware design) in others. Competitor Casio has taken a similar role when offering its own Google Wear OS-powered watches where has no choice but to leave much of the watch’s operation to the core operating system and try to design a proper timepiece around it. Casio and Citizen have taken very different approaches to this. The former is mostly keen on rugged outdoors and sports watches, while the Citizen CZ Smart is very much meant to be a capable daily wear. 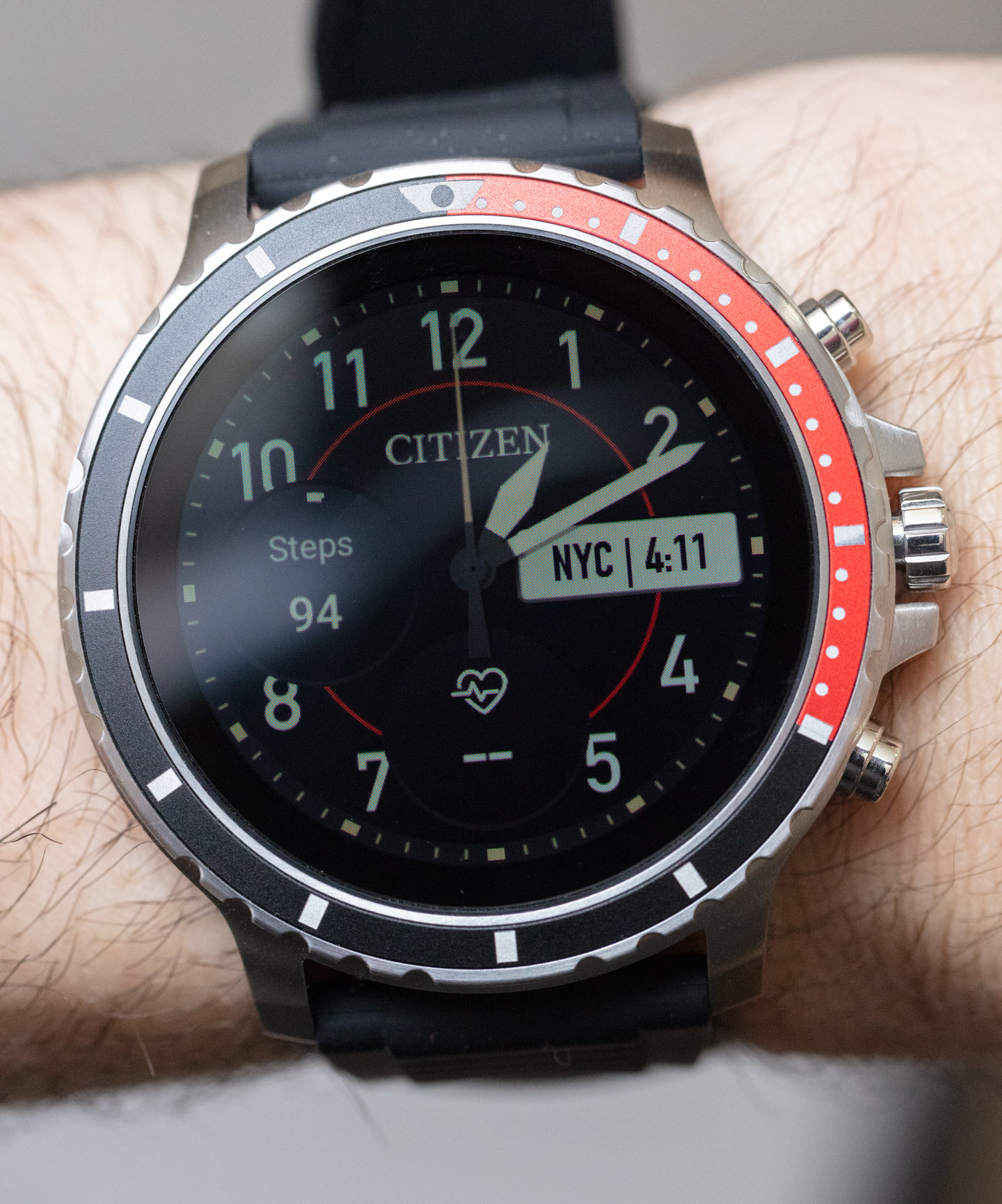 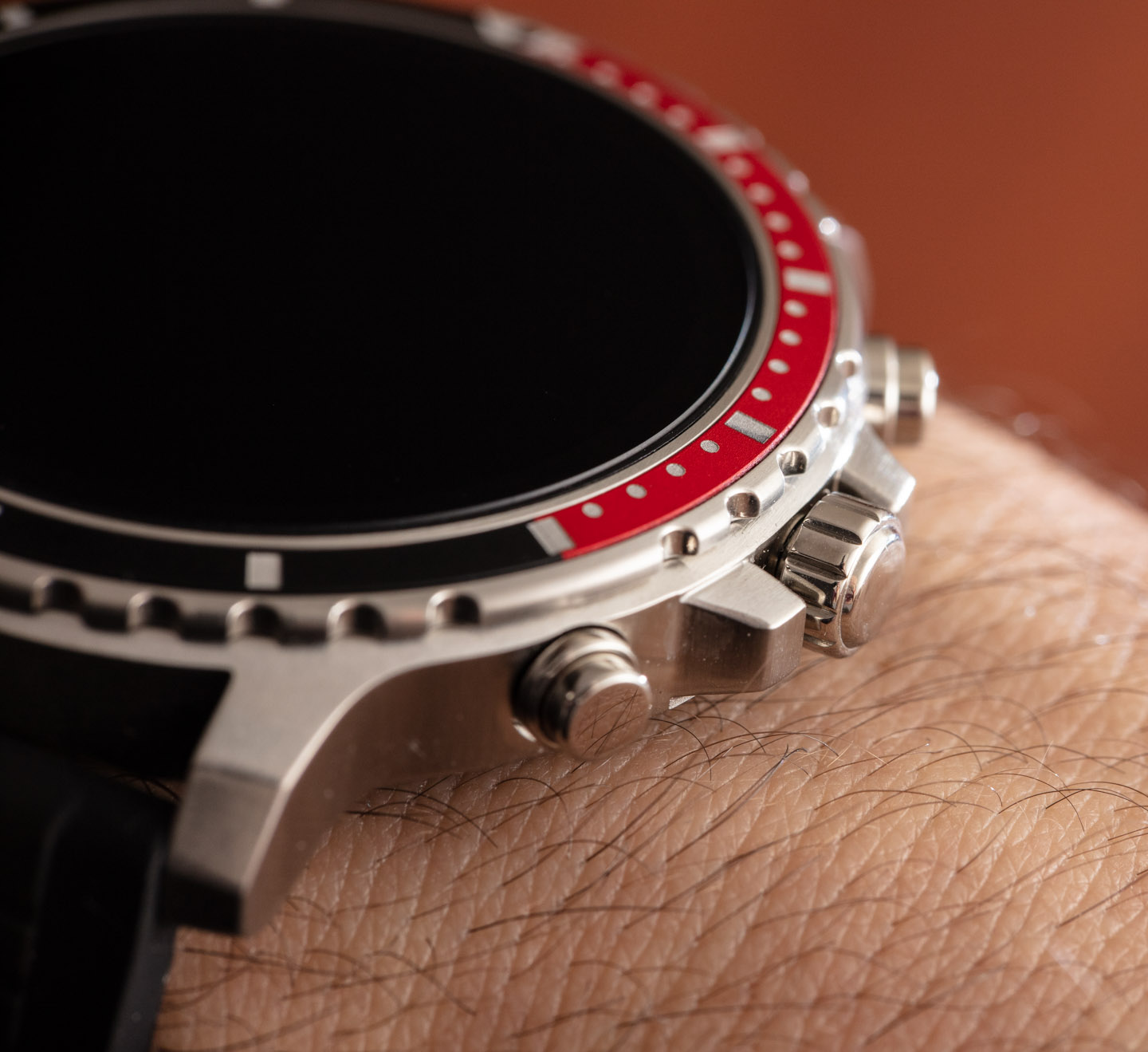 In fact, that is what the Citizen CZ Smart does best: combine the comfort of a traditional watch-wearing experience with the high-functionality of a contemporary smartwatch. In this regard, the system works, and in the smartwatch market, Citizen offers a very competent package at a fair price. Its only real disadvantage is the rapidly shifting nature of the smartwatch market itself, and the software that drives it.

As someone who has now reviewed a plethora of smartwatches, I want to first explain what the Citizen CZ Smart does notably well. Each of the versions is meant to look more like a classic Citizen sports watch than anything really contemporary. The somewhat retro-vibe of the case and bezel design work in its favor, with the ultra-modernity of the touchscreen, contrasting rather elegantly with the overall case design which you might call “timeless diver.” 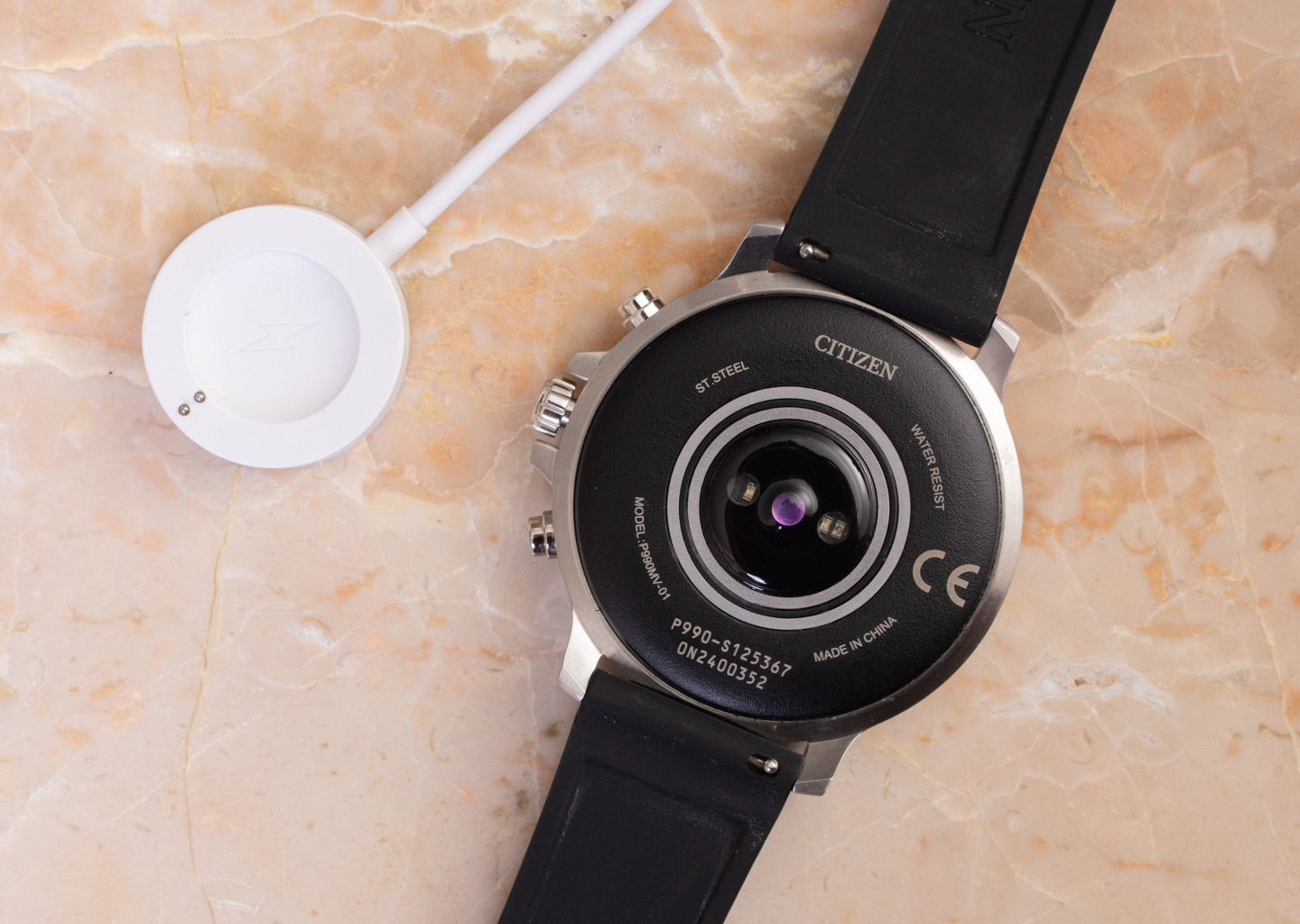 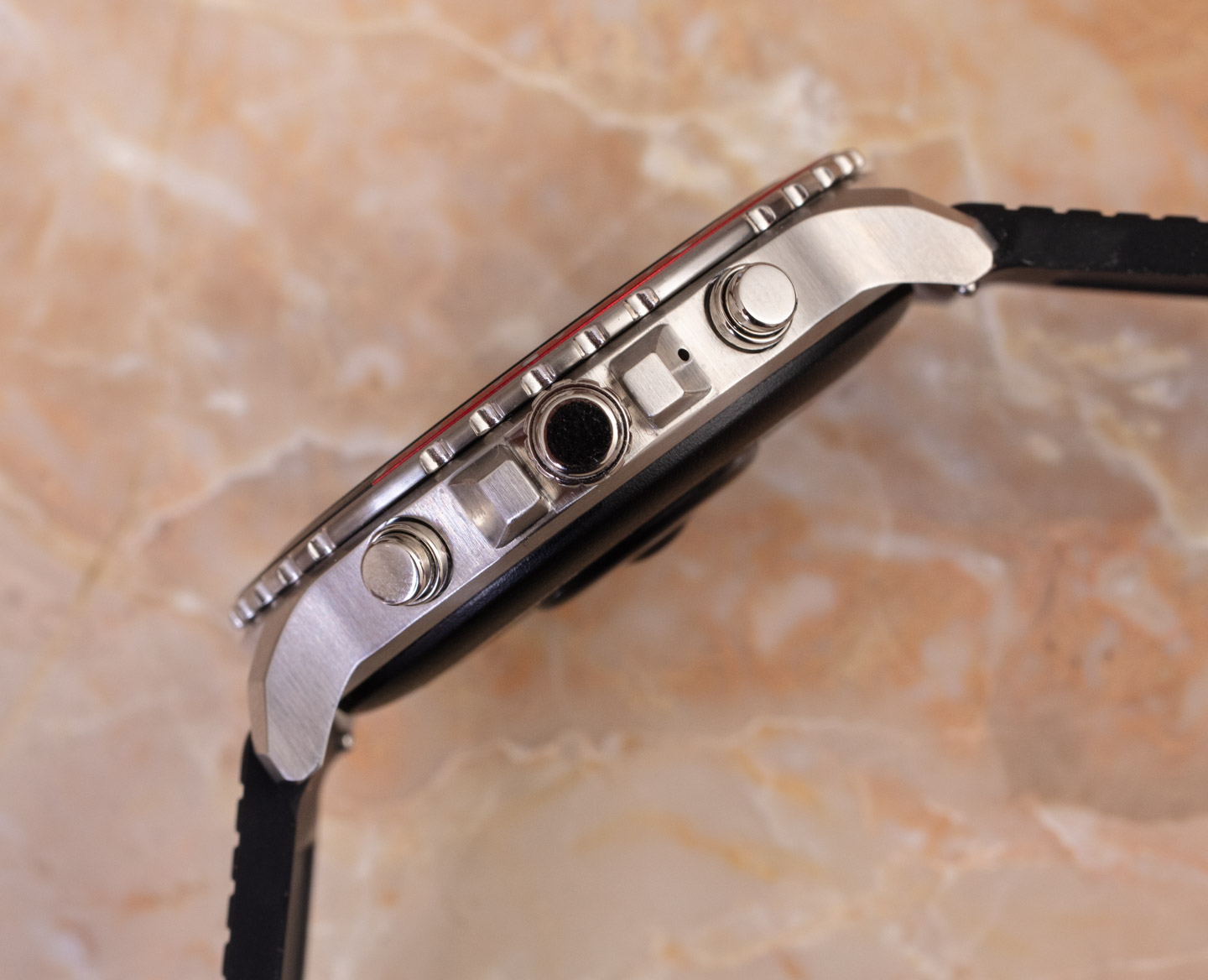 The case is water-resistant to only 30 meters, which is fine for daily use, but that means you can’t expect to take it swimming (somewhat ironic since it is modeled after a diver’s watch). Why so little water resistance? Simply, Citizen made the decision to opt for a decent-functioning case speaker, which is identified by the small horizontal slice on the left side of the case. Citizen markets the CZ Smart as a timepiece you can use to have phone conversations with (Dick Tracy-style). My guess is that this system — in a watch at this affordable price — forced Citizen engineers to choose what the CZ Smart would do best at. I think they were correct in saying that the planned audience for this watch will probably prefer the case to have a better speakerphone for enhanced calls than serving as a swimming or diving watch.

The CZ Smart case is 46mm-wide in steel, with one version in IP-coated black color, while each has a distinctive color palette for the aluminum bezel insert. The case finishing is very good for a smartwatch, and part of what Citizen brings to the table. More important is that the case wears very thin. While the roughly 14mm-thick case isn’t thin when compared to other Google Wear OS smartwatches, it very much is. On top of that, the watch “wears” a few millimeters thinner because of the visual separation between the steel case middle and the tapering black caseback. If you want a full-fledged smartwatch that doesn’t wear as thick as the competition, the CZ Smart is a great choice. 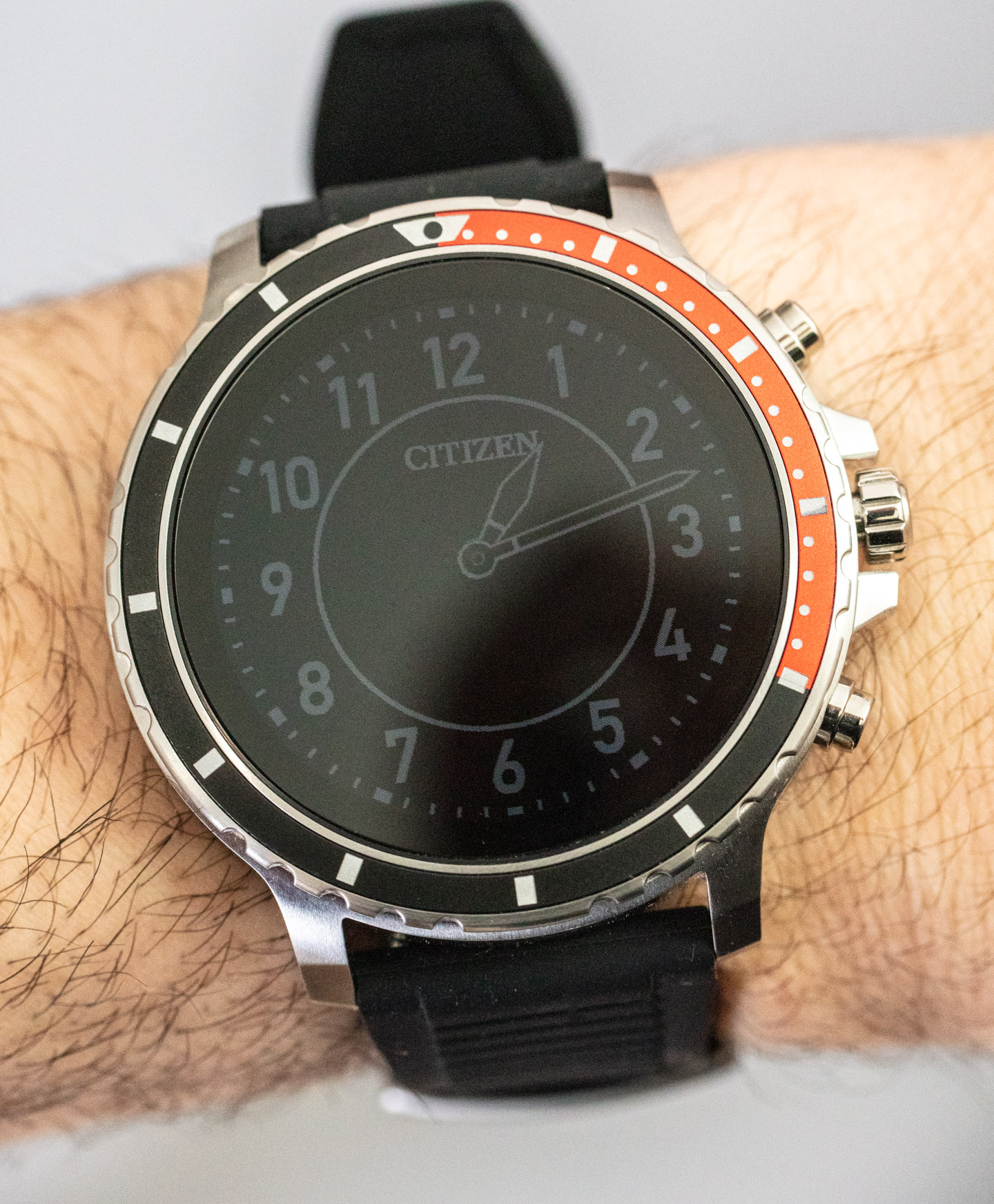 Over the screen is a Gorilla Glass crystal. Sapphire would have been better, but we typically find synthetic sapphire crystals in more expensive products. The 1.28-inch diameter AMOLED screen is bright and sharp. The screen is also responsive, but you don’t need to touch the screen very often if you don’t want to given the two pushers and pressable crown. Citizen does the smart thing by using the crown as a scrolling input device. That said, the crown is just a bit too small and stiff to be as comfortably operated with one’s opposite hand, as I would like. Given the iterative approach to product design at Citizen, we know for a fact that each time the brand releases a new smartwatch product, more and more refinements will reveal themselves.

Citizen packs most of the sensors that mainstream consumers expect in a smartwatch into the CZ Smart. That includes GPS, as well as a heart-rate monitor. The latter is very important to those people who rely on their smartwatches for fitness activity tracking, which Wear OS does with a robust variety of first and third-party software choices. The CZ Smartwatch charges wirelessly via a magnetic charging dock, and battery life is on par with other Wear OS watches I’ve worn (meaning you need to charge it daily). But the CZ Smart does have a few extended battery modes that can extend by several days how long the CZ Smart can serve as a timekeeper. 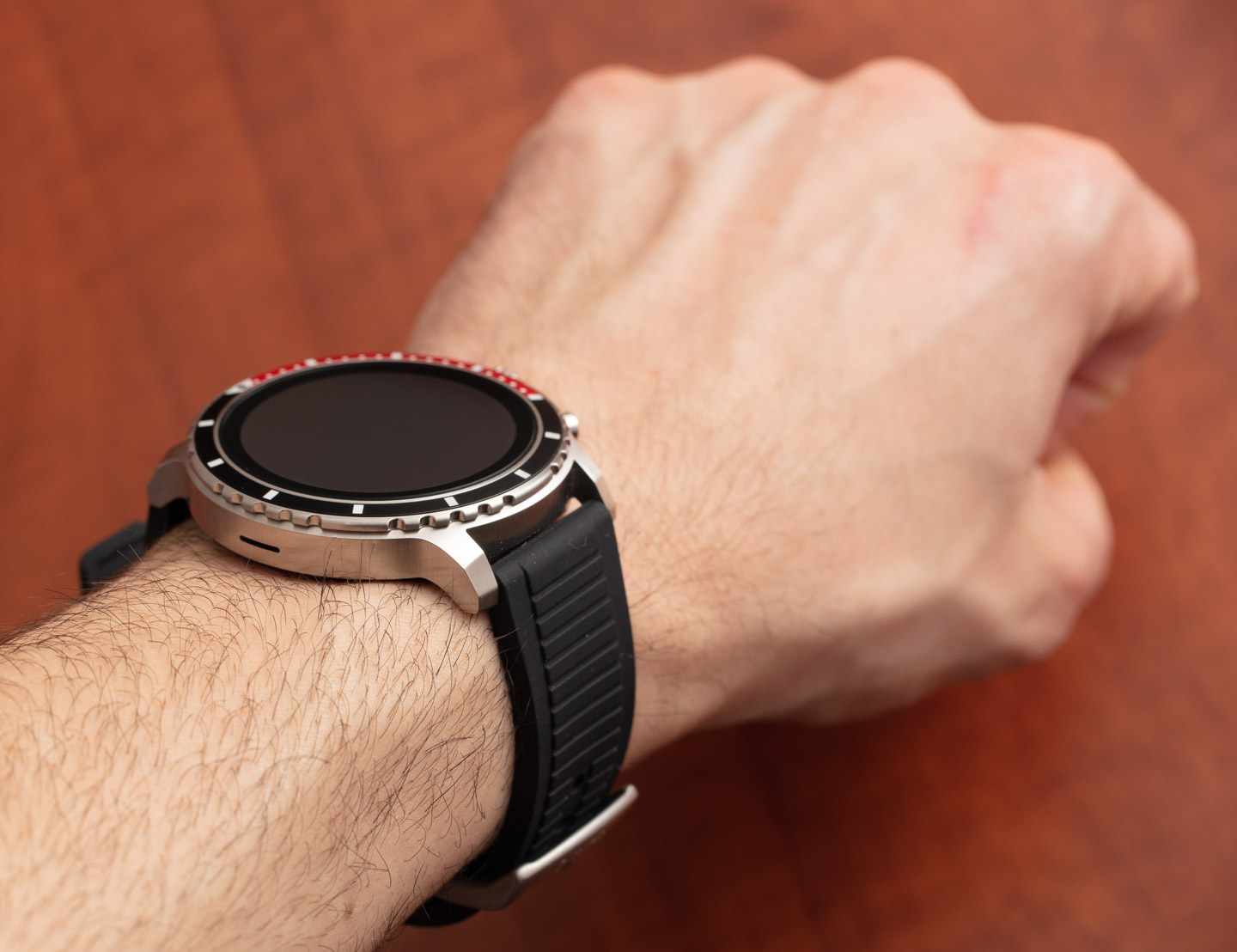 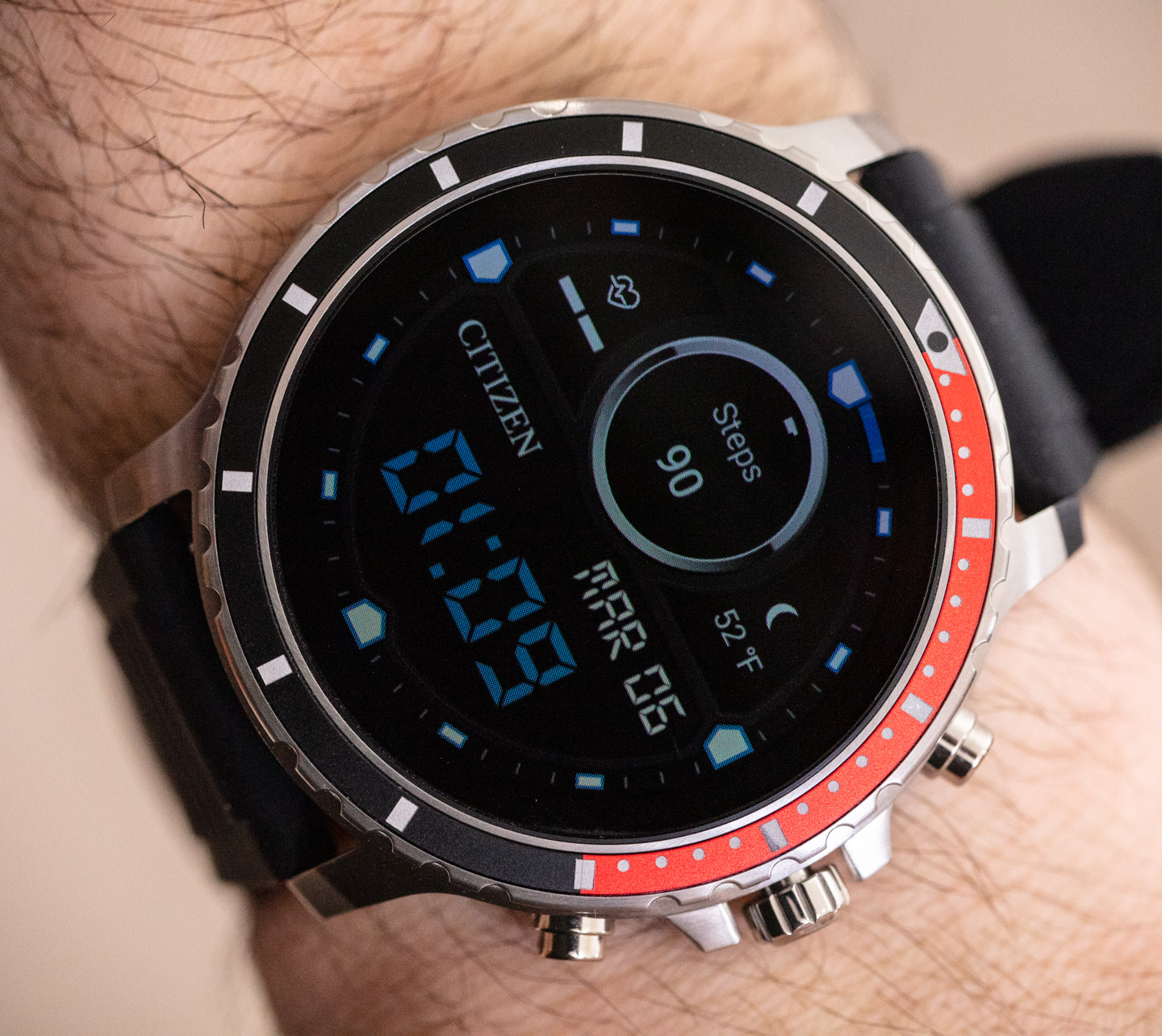 Citizen includes a small handful of proprietary software watch faces, but those can, of course, be swapped out with any number of watch faces available for Wear OS devices. The Citizen-designed dials are attractive but not revolutionary. As someone hungry for novelty in the wristwatch space, I’d like to see watch brands put a lot more effort into really slick smartwatch faces. I think new faces should be released all the time that are useful not only for people who are Citizen product owners, but also anyone who has a Google Wear OS product and might like a professionally designed Citizen smartwatch software dial on it.

Like other modern Wear OS watches, the CZ Smart has an always-on screen state that is a lower-resolution, low-power state for the dial. Depending on the selected watch face, that always-on state will be different. The quality and execution are well-done, but I really want to see more customization features and options when it comes to both the always-on watch face and the fully animated watch faces that you can select. Given the theoretical ability for users to truly personalize their experience, Google Wear OS offers relatively little right outside of the box. I’m sure that will change in the future. 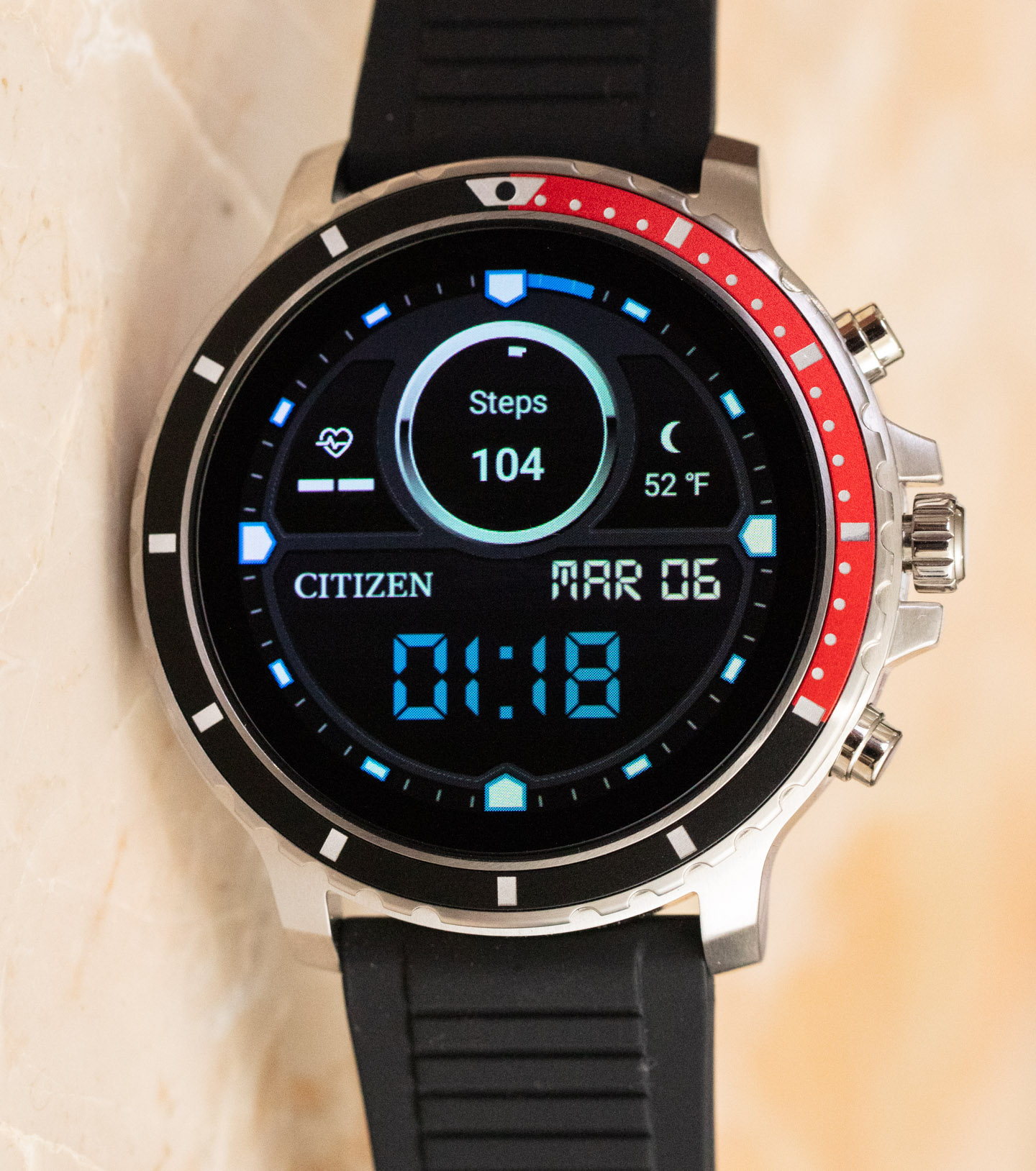 Those with Google-based smartphones will probably have the most smartwatch success with Google Wear OS-based wearable devices. There is no shortage of products in this category today, but most of them aren’t very remarkable. The Citizen CZ Smart doesn’t per se try to push the envelope in any particularly innovative direction, but it does attempt to offer a fashionable look in a well-made and well-priced package. As a mainstream product, I think Citizen did a pretty good job with the CZ Smart. On the wrist and on-paper, it looks and feels like a solid product within the context of a rapidly evolving field. That means that even after being asked to spend a few hundred dollars on a smartwatch, the smartwatch marketplace will ask you to do the same thing in 12-18 months (a lot like your smartphone, that is).

Attached to the CZ Smartwatches are either matching steel bracelets (in natural finish or black) or a selection of sporty silicone straps on quick-release straps that Citizen also sells individually. This particular Citizen CZ Smart reference MX0000-07X has a black and red-colored aluminum bezel insert and comes on a black silicone strap. Price for each of the Citizen CZ Smartwatches is $395 USD. Learn more at the Citizen watches website here.