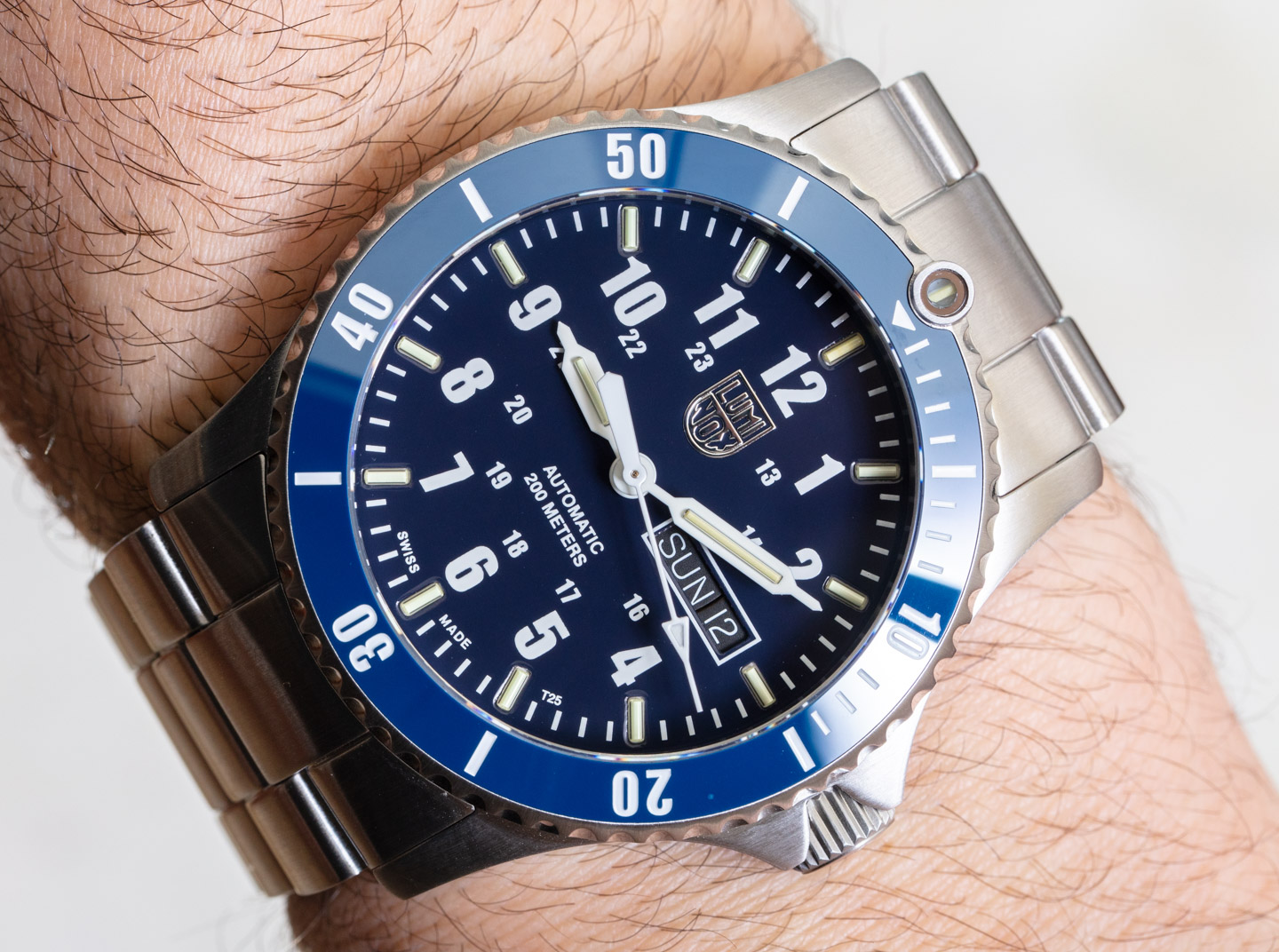 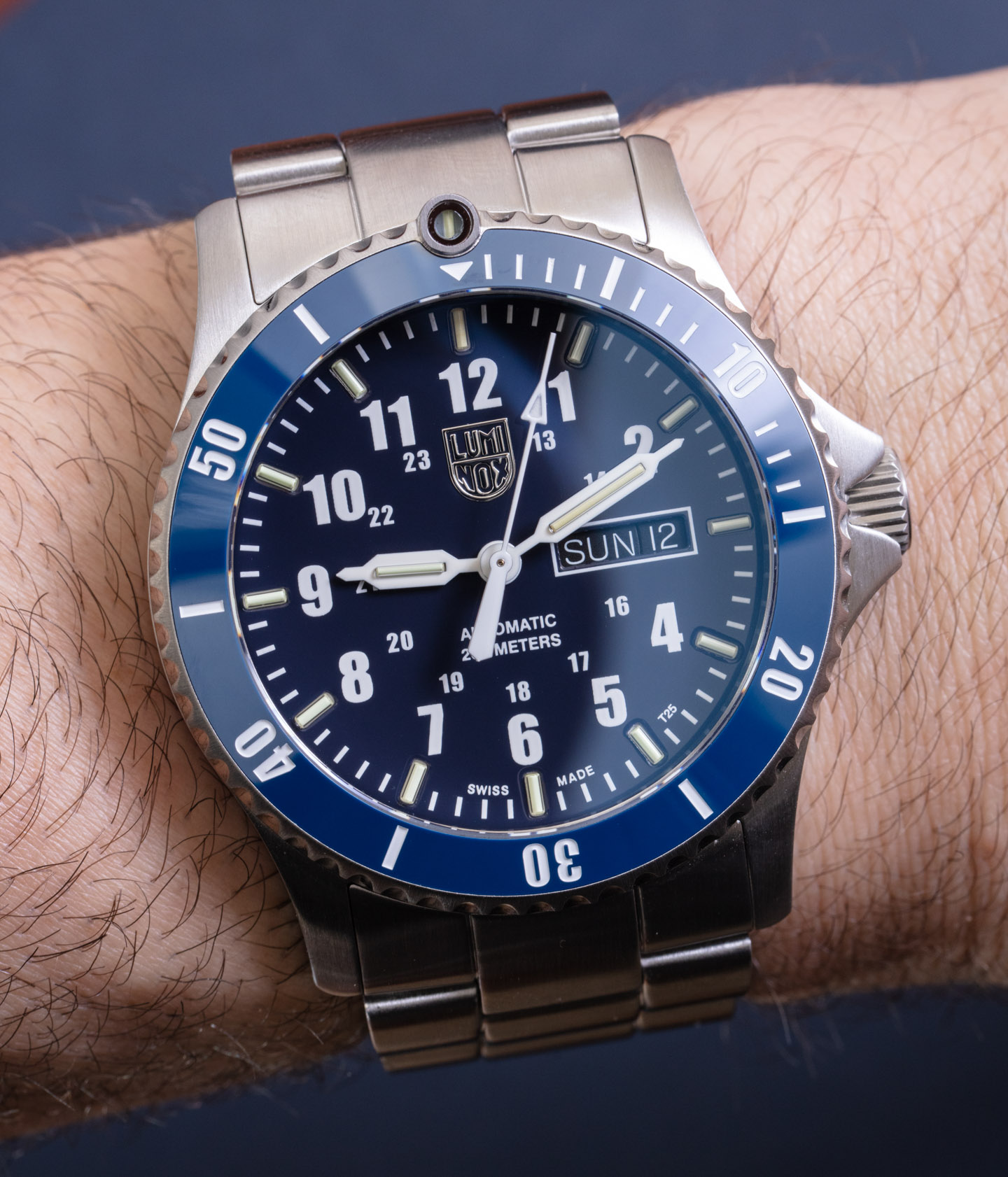 The new Automatic Sport Timer collection from Luminox is a handsome all-purpose durable sporty timepiece with an automatic Swiss Made movement and the benefit of tritium gas tube illumination. It also happens to be a retro-revival of one of the first Luminox watches from back in 1990. Understanding a bit of the lineage of this timepiece will help add some important flavor to what is otherwise a more than decent daily wear.

Luminox is now Swiss-owned, but it was actually started as an American company. At the time of Luminox’s launch in 1989, watches from Swiss Traser were being sold in the U.S. and benefited by being the in-house brand of MB Microtec, which produces self-illuminating tritium gas tubes in Switzerland. Luminox saw a marketing opportunity to celebrate the larger appeal of this technology and gained a lot of popularity with its “Navy SEALs” collection watches sold in popular retail outlets such as the Sharper Image. 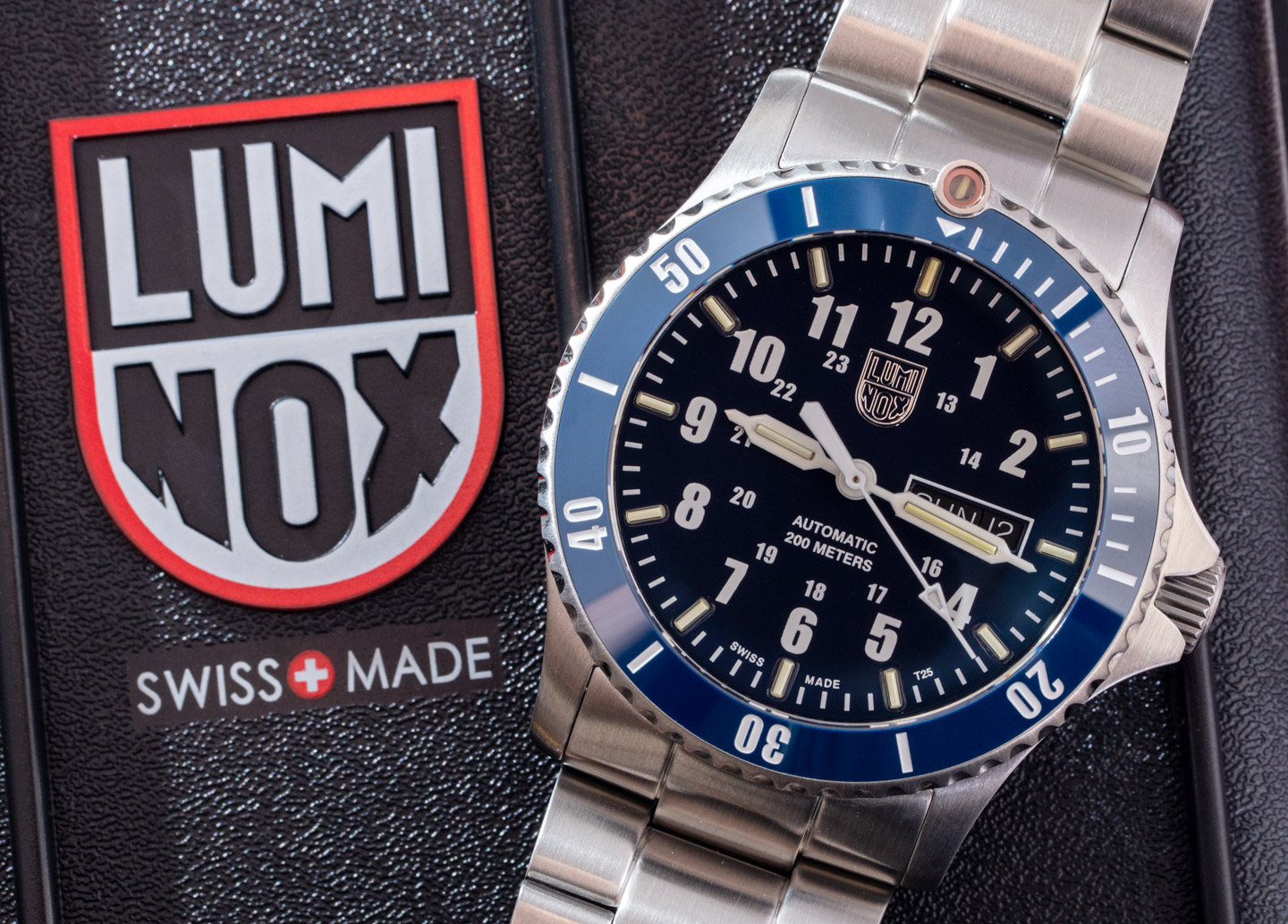 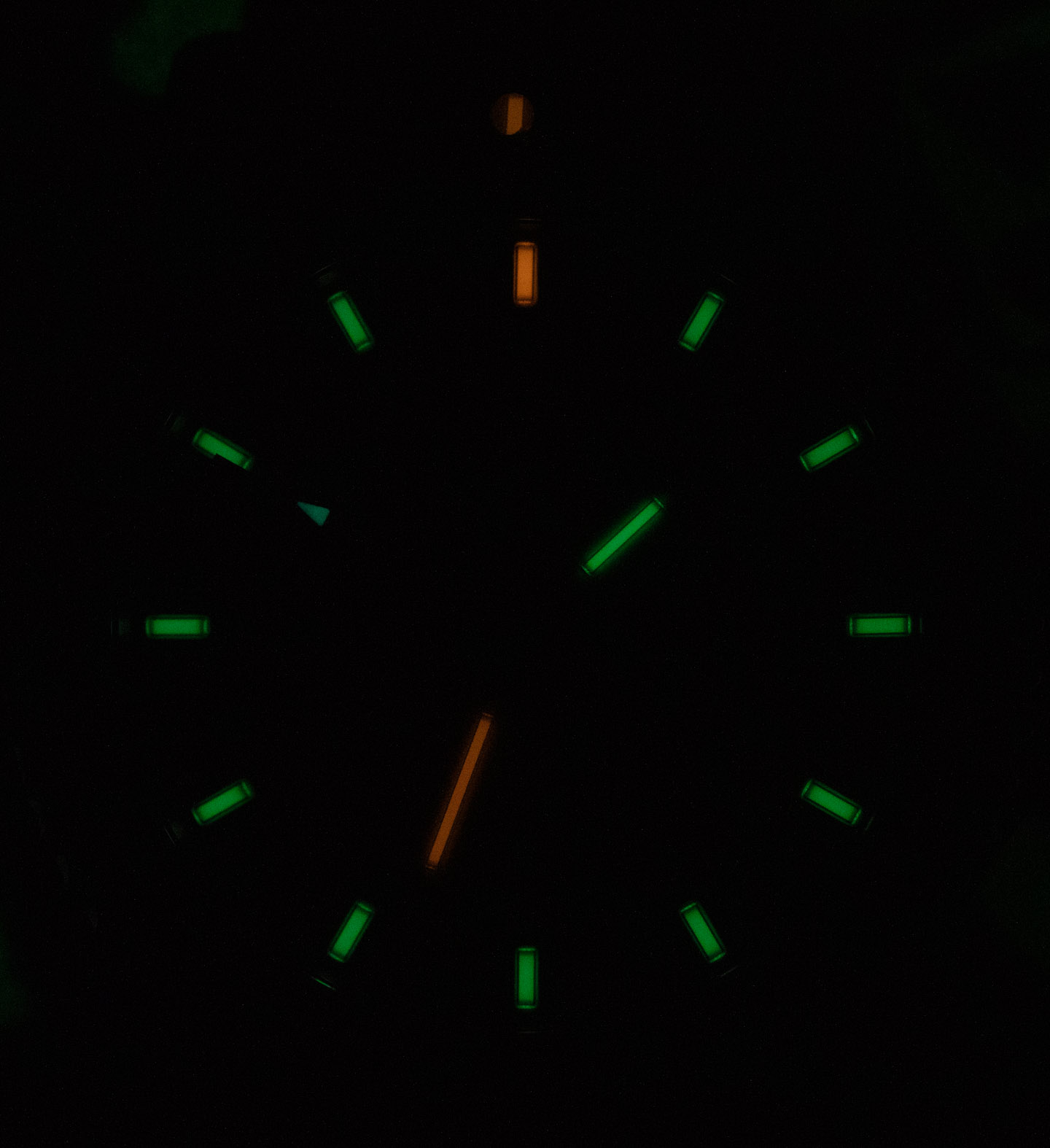 Barry Cohen – who founded Luminox in California  – later sold the company to his Swiss interests, which is how the brand became “fully Swiss.” Going back to 1990, the Sport Timer 1540 collection is one of the very first Luminox watches produced, and it was a sort of blend of military field watch with the look and feel of the Rolex Submariner – with tritium gas tubes of course. In 2019 Luminox released the first version of the redone Sport Timer known as the Luminox Sport Timer 30th Anniversary 0900 Limited Edition (aBlogtoWatch hands-on here). That model was limited to 730 pieces, and unlike this reviewed 0924 model, has a Swiss quartz versus automatic movement.

For 2020, Luminox released more Sport Timer watches as non-limited-edition Automatic models in the Sport Timer 09XX family. The Sport Timer 0921 has a black dial like the original, and this 0924 comes on a metal bracelet and has a blue dial with a matching blue ceramic bezel. Speaking of the bezel, it is one of the elements most different about the modern Sport Timer, as opposed to its 1990s counterpart. The modern models include scratch and color fade-resistant ceramic bezel inserts. The bezel itself also has a lume pip which houses a tritium gas tube. This has also required a small notch to be created to house the tube. This is an interesting design decision because the upside-down arrow that was normally at the 60-minute marker is still there but actually just smaller and placed underneath the window for the tritium gas tube. Some people comment that this design decision makes the watch look a bit weird, which is true — though for me, it is the good kind of weird since it helps give the Sport Timer 0924 and 0921 watches a bit more welcome character. 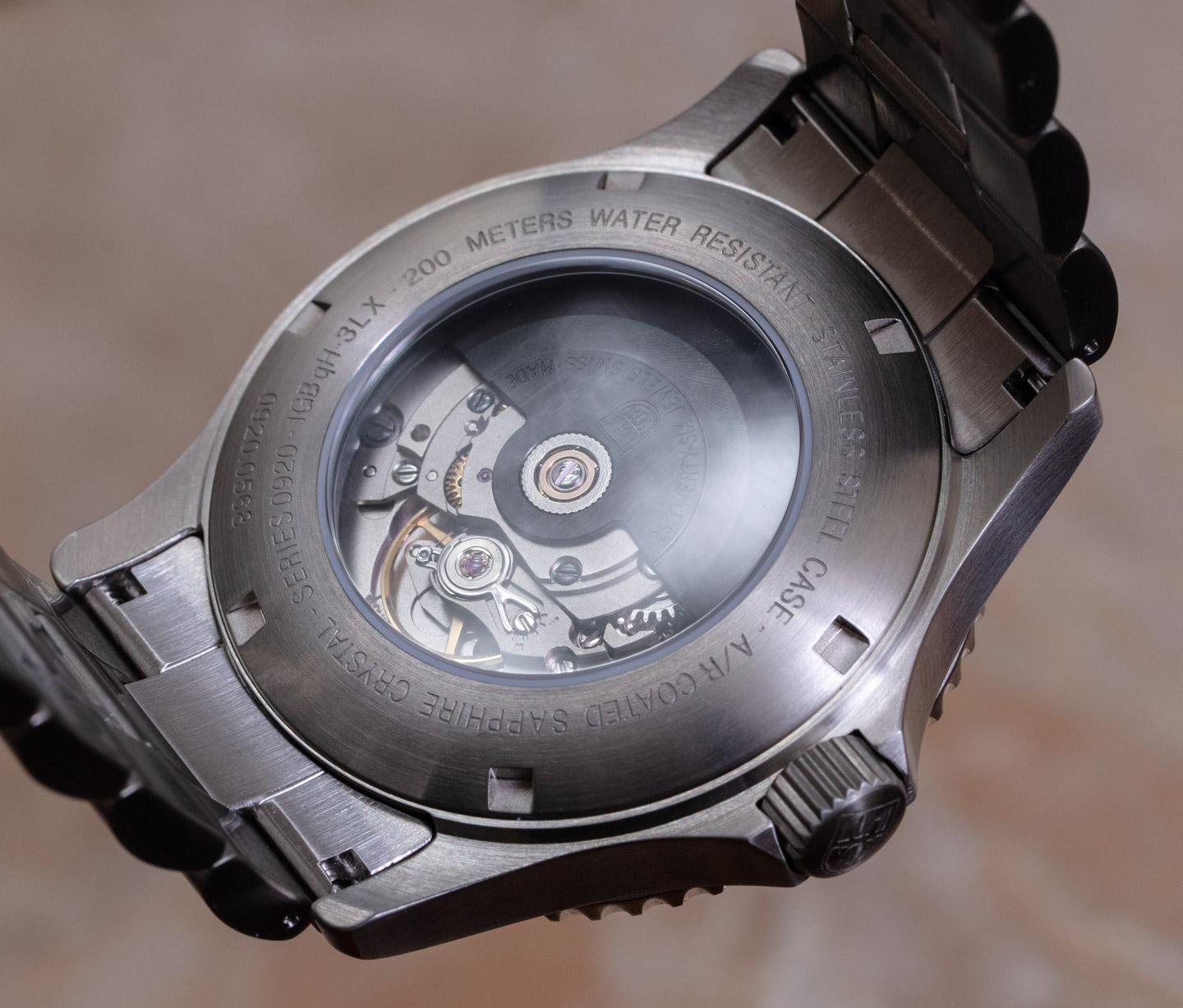 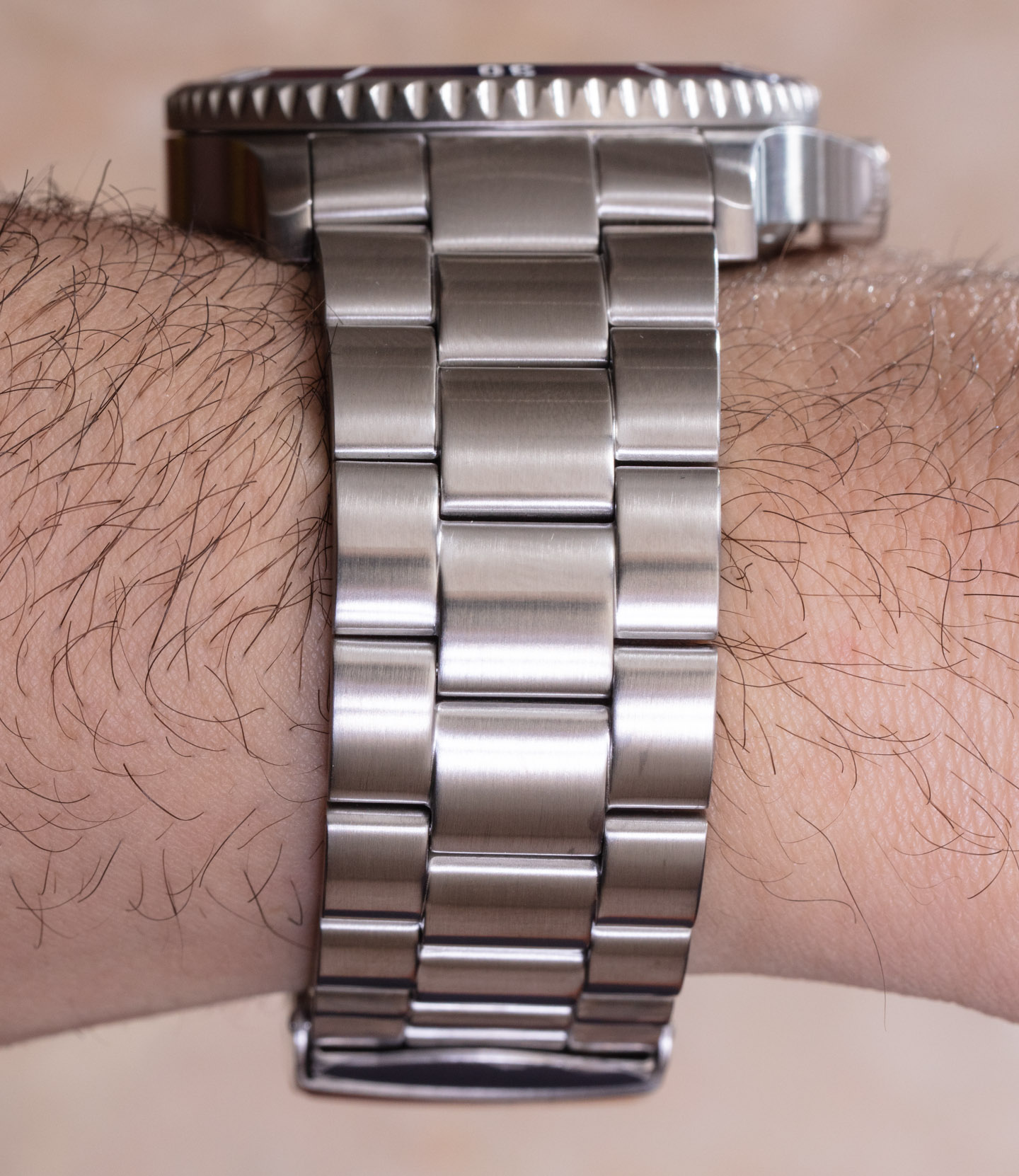 Another design element that helps give the Sport Timer character is the decision to pair a 42mm-wide case with a 24mm-wide bracelet/strap; 24mm-wide straps are typically paired with slightly larger watches. The bracelet does taper down to 22mm, but the result is still an imposing timepiece — in a watch that isn’t actually that massive given its very mainstream sizing of 42mm-wide. The case is also 13mm-thick and has a lug-to-lug distance of about 48mm. That means this is a good choice for those who like the look of a big watch, without the watch actually being too big.

The all-brushed steel case has a nice military/tool watch feel to it, which is exactly what Luminox was going for. The crown has a sensible crown-guard system, and the case is water-resistant to 200 meters. Over the dial is a flat AR-coated sapphire crystal, and over the movement is another sapphire crystal window offering a view of the automatic movement inside. 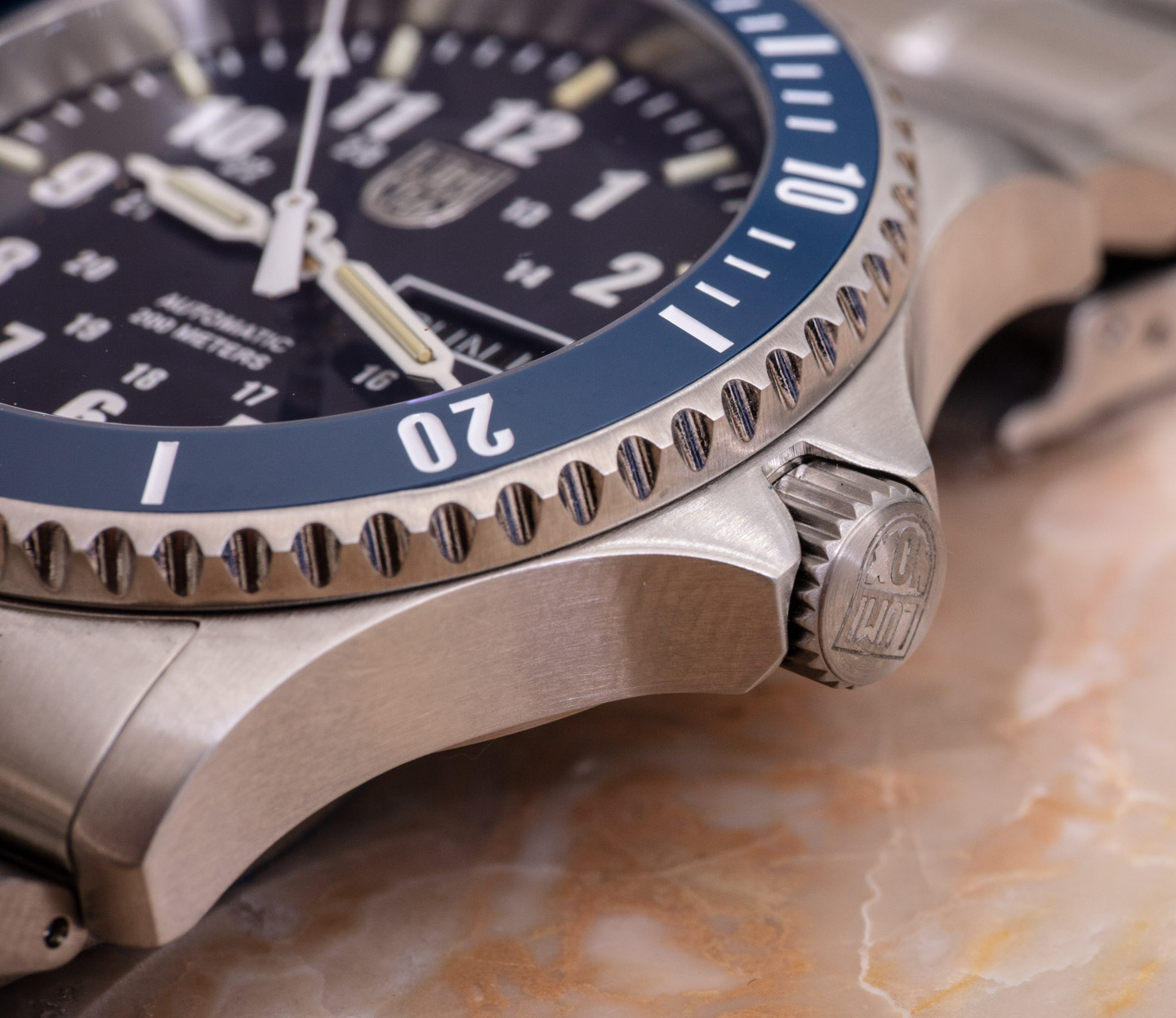 Luminox uses the Swiss Made Sellita SW220 automatic movement (operates at 4Hz with about two days of power reserve) in the Sport Timer. Functions include the time along with a day-date calendar system. The movement has a custom black-colored Luminox automatic rotor.

The overall military/diver’s watch look of the Sport Timer 0924 represents probably my favorite genre of timepieces. These are built to be much more durable than mere field watches but are also heavier and beefier. The dial’s blue color is very handsome, and I like the excellent legibility offered by the high-contrast white hands and hour markers. Like many military-style watches, the inner part of the dial has a ring for military time. As always, the hands and hour markers have tritium gas tubes for dial illumination in the dark. My only issue with the dial is that I believe the Luminox logo applique is a bit too reflective. 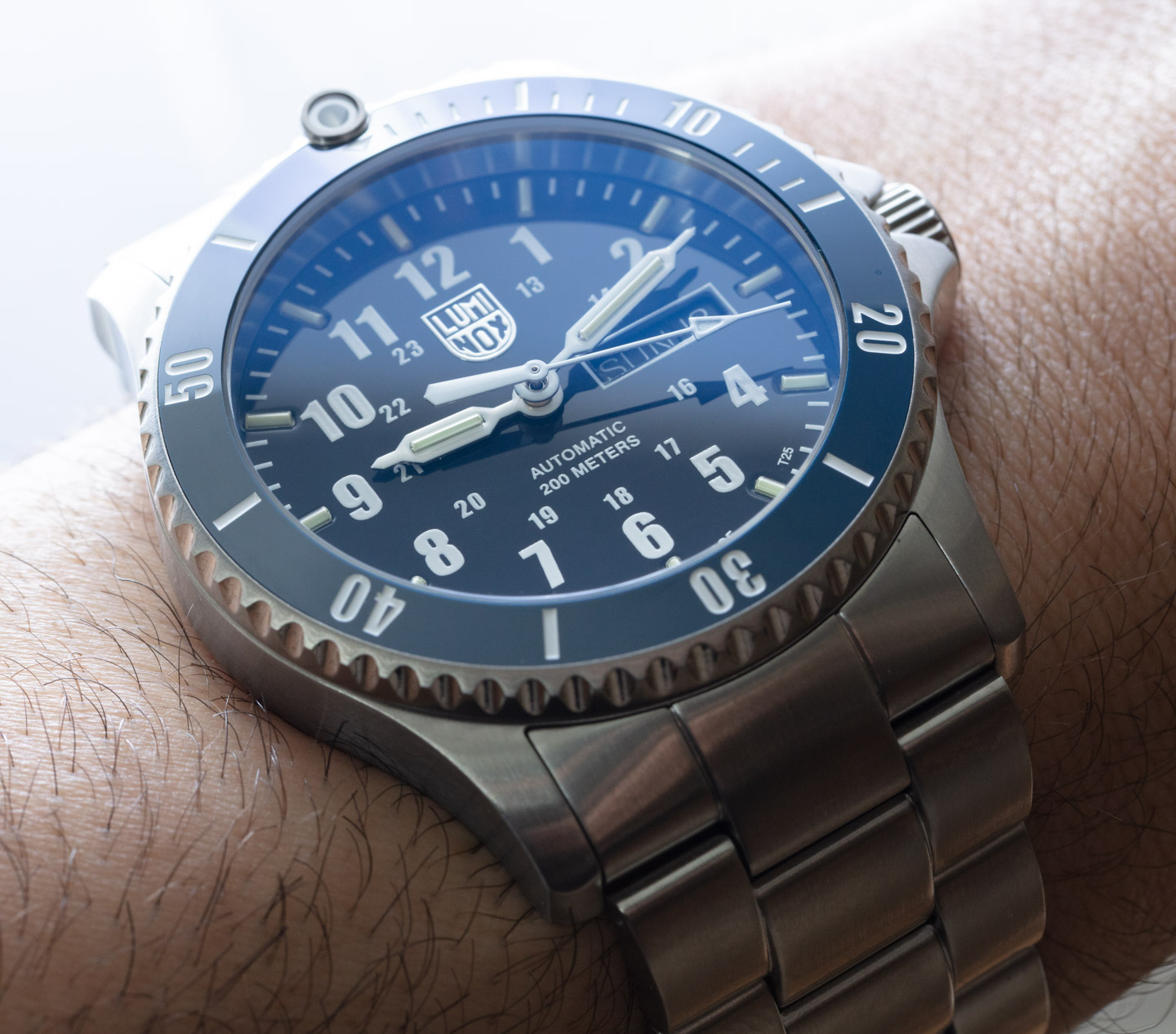 The trendy blue color and the fact that the watch is fitted on a bracelet give this sports watch a very dressy vibe. You could even pull off the Sport Timer 0924 with a suit. The bracelet is handsome and comfortable with its only slight twist on the traditional three-link design. The links are curved on the top, but flat on the bottom, which tends to add to visual mass a bit. The bracelet operating is simple, but the deployant clasp has a tool-required micro-adjust, and the bracelet has two half-links. This means the bracelet is designed to be fitted very precisely (and thus, comfortably) to one’s wrist.

With the limited-edition 30th anniversary Sport Time model, Luminox also demonstrated how nice the watch looks on a NATO strap – and the same is likely true for this blue-dialed model. This is probably one of the most mainstream and successfully conservative watches Luminox has come out with in a while. Consider the Sport Timer to be a sort of polar opposite to the Luminox Bear Grylls Survival Master watch — reviewed on aBlogtoWatch here. This is also Luminox offering some very specific competition to brands such as Victorinox Swiss Army and Marathon that captures a lot of the same type of consumer attention. 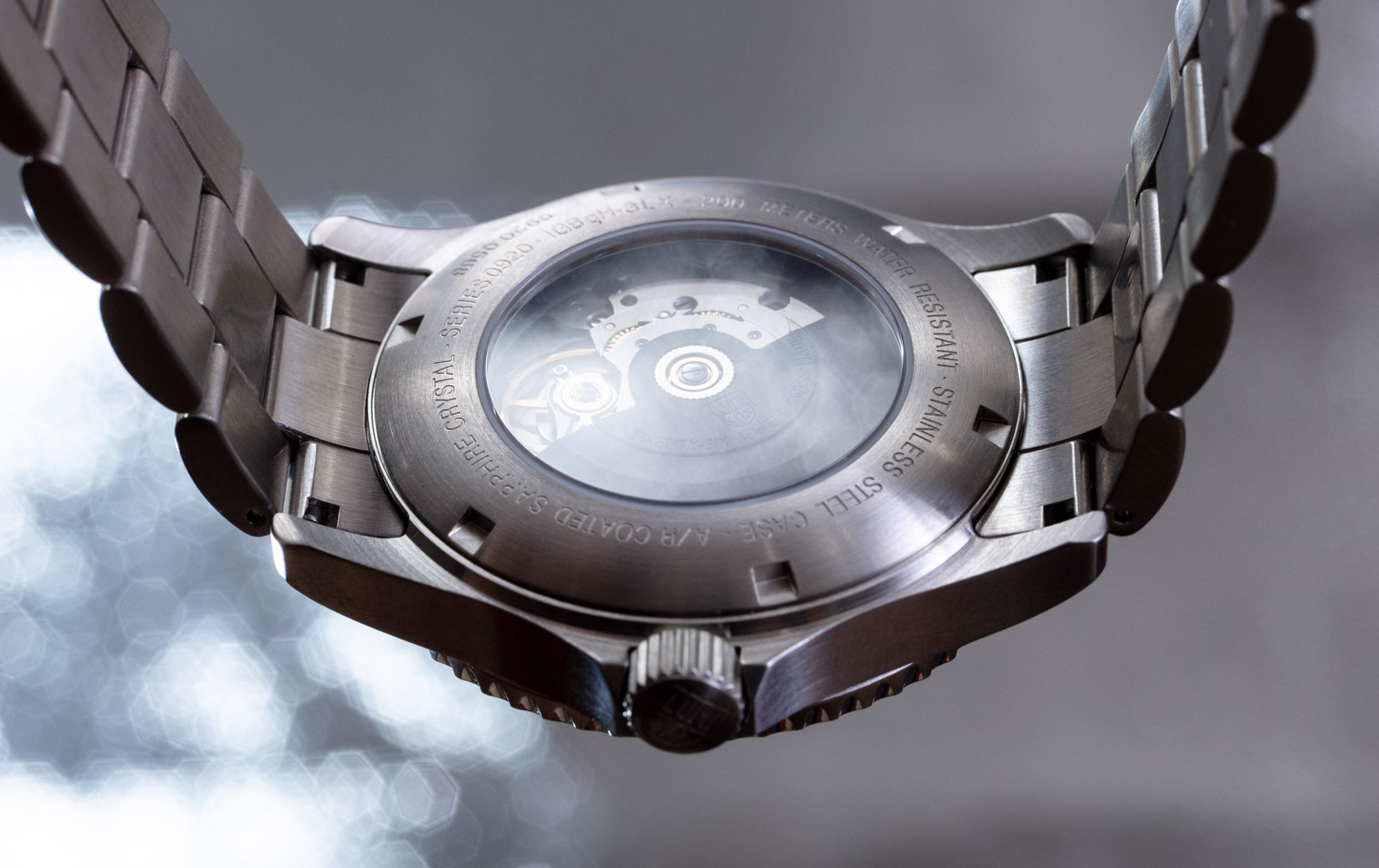 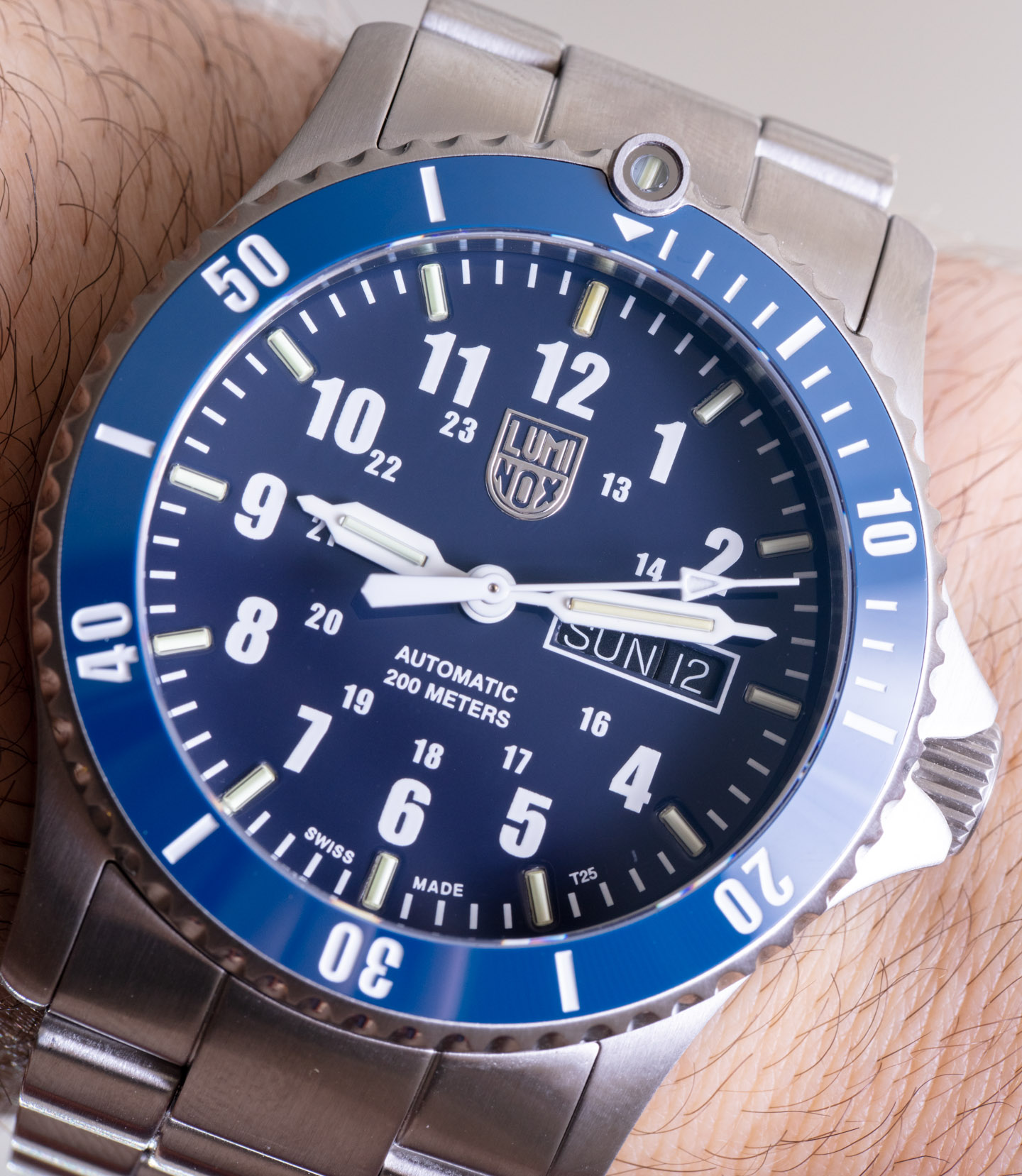 Overall, I like the Luminox Sport Timer 0924 watch a whole lot. If you are a watch enthusiast, you can appreciate the heritage behind the design and how it shows an interesting progression over the last three decades at a neat company like Luminox. Mainstream consumers can simply like the elegant sport watch design that comes with the functional benefit of tritium gas tubes and military-style case construction. Price is also seemingly fair. Luminox sometimes looks to be a bit on the ambitious side with its quartz watch pricing, but by comparison, fairer with the mechanical watch pricing. I certainly think there is value at this price point for a more than decent watch such as this. Price for the Luminox Automatic Sport Timer 0924 watch is $1,290 USD. Learn more at the Luminox website here.

Necessary Data
>Brand: Luminox
>Model: Automatic Sport Timer 0924
>Price: $1,290 USD
>Size: 42mm-wide, 13mm-thick, and ~48mm lug-to-lug distance.
>When reviewer would personally wear it: Daily wear sports-style watch when I am in the mood for blue. Watch is just as happy to go to brunch as it is to take a swim.
>Friend we’d recommend it to first: Devotee of modern military-style watches that wants something functional with a designer twist to it.
>Best characteristic of watch: Faithful homage to one of the first watches from the brand in a package that feels desirable today. Good comfort and legibility. Conservative design helps Sport Time collection have broader appeal than many Luminox watches.
>Worst characteristic of watch: Some don’t like how Luminox integrated the tritium gas tube into the rotating bezel (but I don’t mind it). Logo on the dial is too shiny.