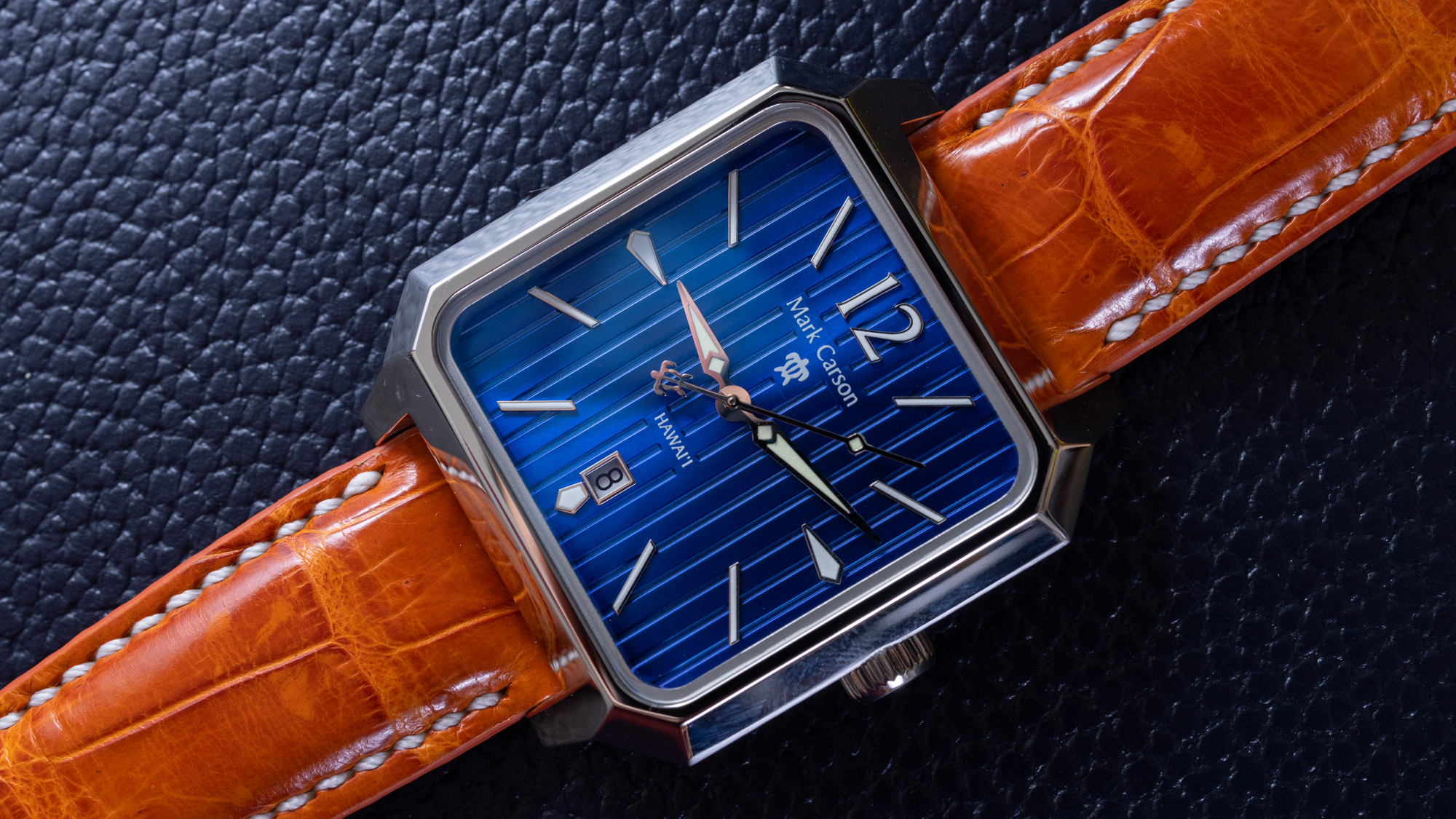 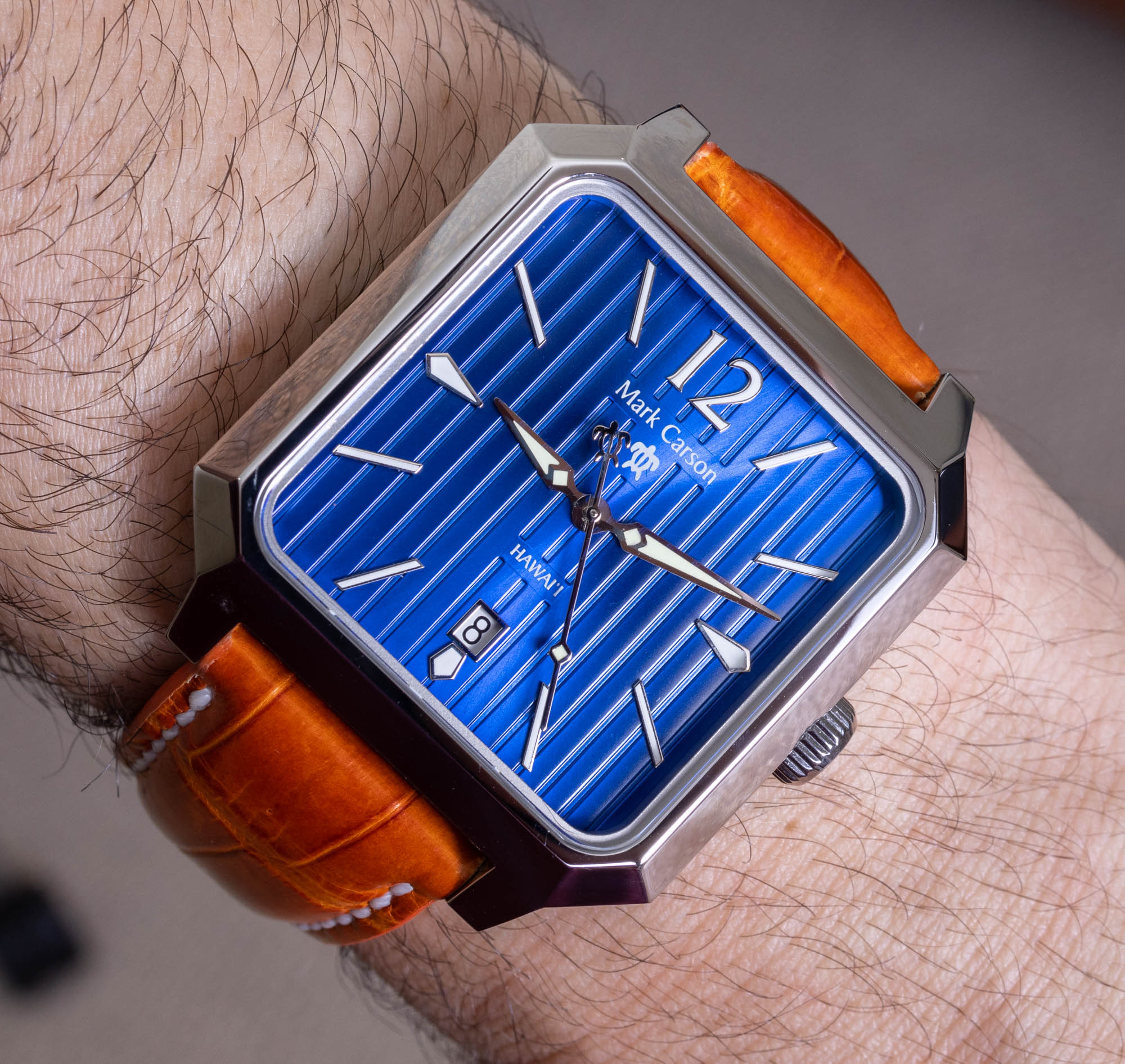 Hawai’i-based Mark Carson is a timepiece enthusiast and small-brand entrepreneur. He also happens to be a long-time member of the aBlogtoWatch community and has even been part of the aBlogtoWatch team in the past. He recently let me know that he had a new watch coming out and that it was square in shape. I was intrigued. He and I had talked in the past about the challenges of making an attractive-looking square-cased watch design. While there are many square or rectanular watches on the market, very few of them seem to make a lot of sense when it comes to visual proportions and visual attractiveness. Mark couldn’t help himself to take up the challenge of coming out with a square watch (very different in style than his previous Mark Carson Ka La model), and the result is the Mark Carson Kailua timepiece family.

Kailua is also the name of a town on the Hawaiian island of Oahu, near Honolulu, where Mark Carson resides. I stayed in Kailua one time and have very fond memories of the picturesque beach neighborhood. It is a great name for a watch collection and makes sense within the larger “designed in Hawai’i” theme of the Mark Carson brand. The Kailua watch has a square shape, and Mark Carson’s particular design strategy here was to facet the edges. This is very similar to what Bulova did in the rectangular-cased Breton watch and is an effective technique for reducing the harsh angularity that would come from a more traditional square shape. This is particularly effective at the square corners, which are not curved but again given facet cuts in order to reduce the visual “squareness” of the overall composition. On the wrist, I think the shape works nicely, and I can easily view the Kailua watch looking slick on the wrist of the man who designed it. 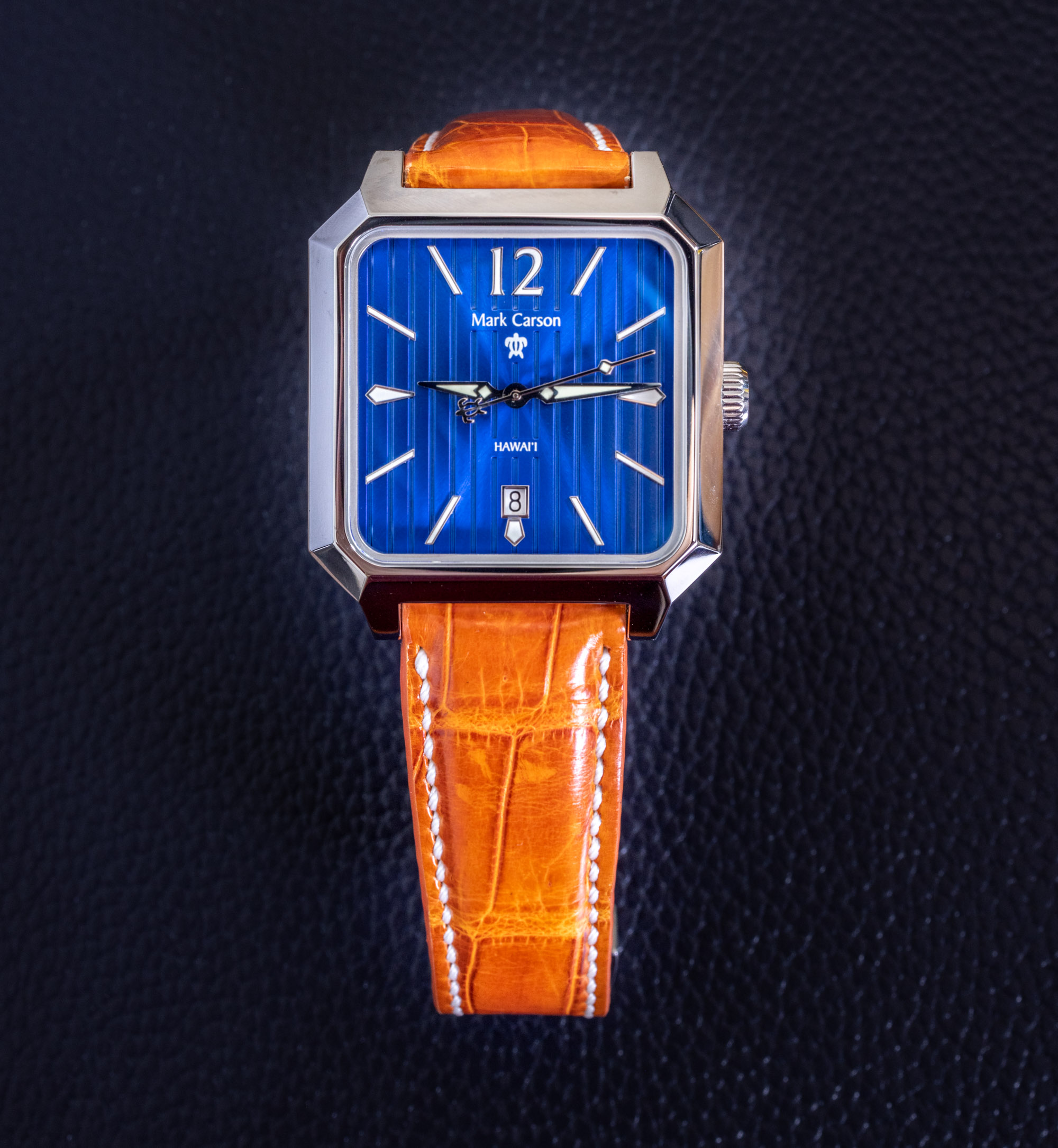 The Kailua watch is probably the most conservative design made under Mark Carson’s brand thus far. Compare it, for example, to the Mark Carson Ka La watch that debuted about a decade ago. Particular restraint came in with the dial, which has a retro-charm to it along with an easy-to-read interface that includes high-contrast hands and hour markers. The applied markers are put against a dial with a stamped vertical texture, offered in blue for this Kailua reference 24365 model. Mark Carson also produces the Kailua with a black dial, as well as a champagne dial. The latter has one too many colors on the dial, in my estimation — the two-hue color palette of this Kailua model works better. Mark Carson also produces a GMT version of the Kailua model family.

The dial has Super-LumiNova on the hands and hour markers and features a symmetrical date window at 6 o’clock. One small quibble is the presence of the graphical turtle logo twice. It makes an appearance on the dial under the Mark Carson name, as well as being the counterweight on the second hands. In my opinion, the solution here is to simply remove the graphical logo from the dial and keep that visual for the seconds hand counterweight. 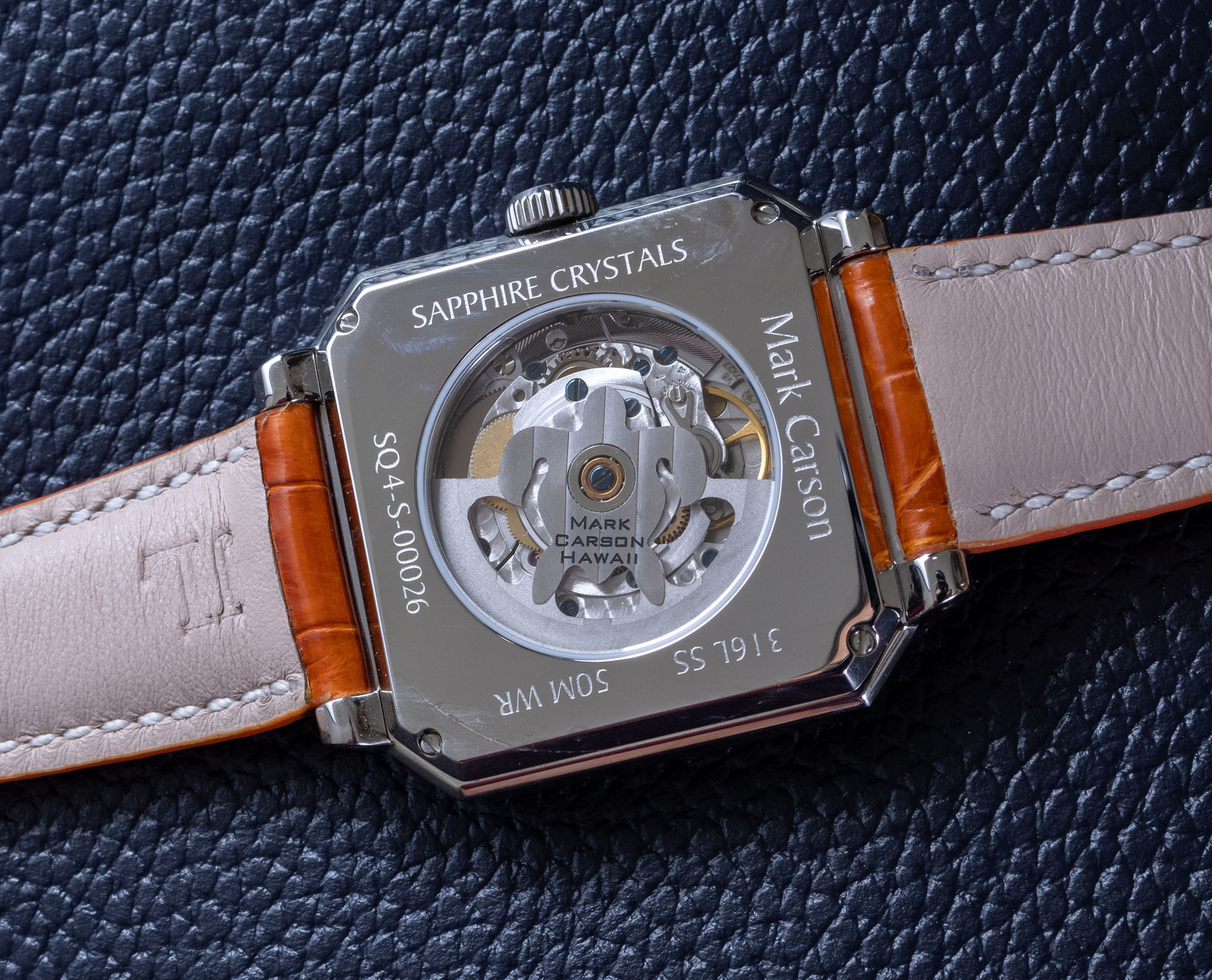 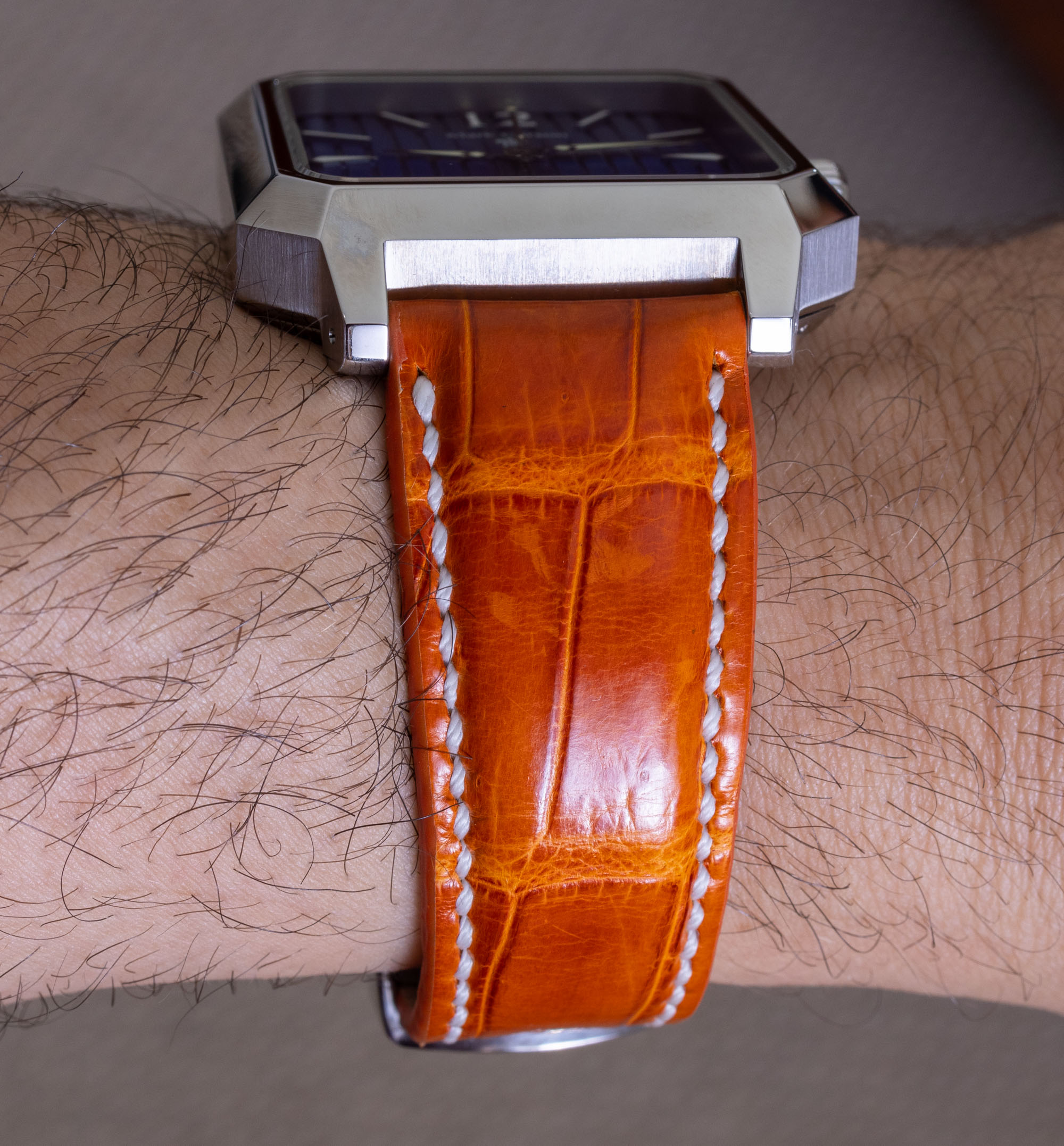 At 40mm-wide, the polished steel Kailua case is 11.3mm-thick and has a lug-to-lug length of 48mm. The case is water resistant to 50 meters and has a sapphire crystal over the dial as well as over the movement on the caseback. Even though the Kailua watch is about as thin as it can be, it does feel a bit thick. I think a solution for that would have been to go with a movement that includes a subsidiary seconds dial, or no seconds hand at all. That would have made it possible to reduce the thickness of the dial compartment. Even a 1.5mm reduction in case thickness would make a big difference. But I do like the more assertive wearing experience of the Kailua, and I don’t think that most people will mind the thickness, so long as they don’t have tailored sleeves to slip the watch under… and who in Hawai’i is wearing sleeves?

Inside the Kailua watch is a “top-grade” version of the Swiss Made ETA 2824-2 automatic movement. It is nicely decorated in this form and operates at 4Hz with about two days of power reserve. The custom automatic rotor with the turtle shape is a welcome touch, for sure. While the movement is Swiss Made, the watch is not on account of it being assembled in Hawai’i. 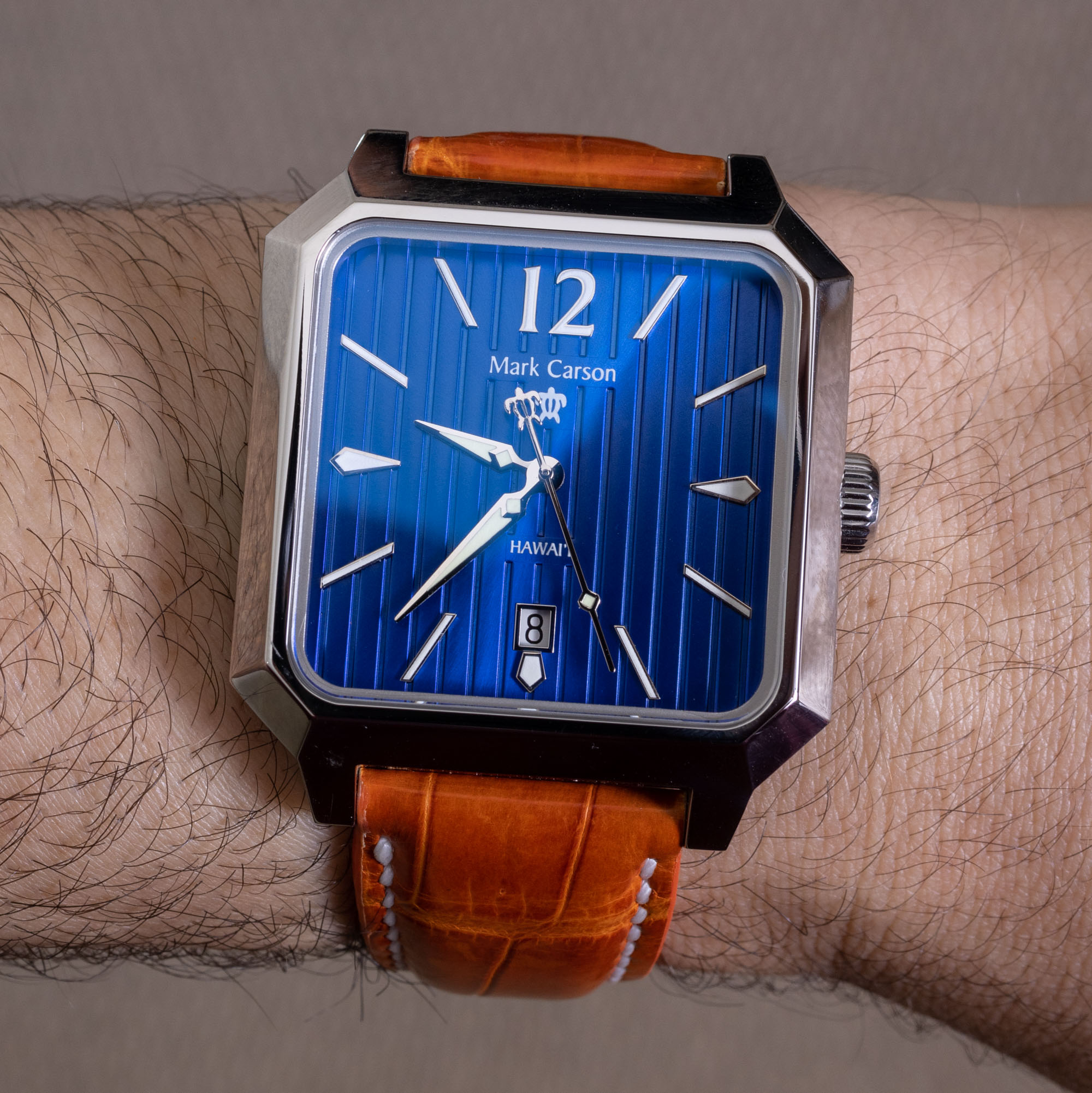 The Mark Carson website offers the Kailua 24365 watch with a few strap options, including a black rubber strap and three crocodile strap colors. This honey brown “cognac” version is a nice choice if you can pair the brown with other items in your wardrobe. Another good option is the deep-blue crocodile strap. The particular crocodile straps used are of a pretty high quality and suit the timepieces well, in my opinion. I also like the straps because they are thick and padded, but very pliable, and wrap around your wrist easily without bothersome stiffness. These kinds of straps can, however, wear quickly if paired with a traditional pin buckle. It was wise for Mark Carson to pair the straps with a folding steel deployant clasp.

Watch collectors tend to be genuinely supportive of entrepreneurs among their ranks, and I think interest in the Mark Carson Kailua will be high. There are, of course, always discussions about price. These days, even among small brands, consumers are given an incredible variety of visual choices and prices to choose from. Given the price of the components that go into the Kailua and the cost of assembly in the United States, I don’t think the price for the Kailua watches is unfair, though there is a lot of competition in this space. The good news for Mark Carson is that there aren’t that many nice-looking men’s square watches in these price ranges, so, hopefully, enough people for whom a design like this is highly complimentary will learn about the Mark Carson Kailua. I’ve enjoyed wearing it myself, and it’s never a bad thing to look at your wrist and think about a tropical island destination. Price for the Mark Carson Kailua reference 24365 watch on the crocodile strap is $1,899 USD. Learn more at the Mark Carson watches website here.