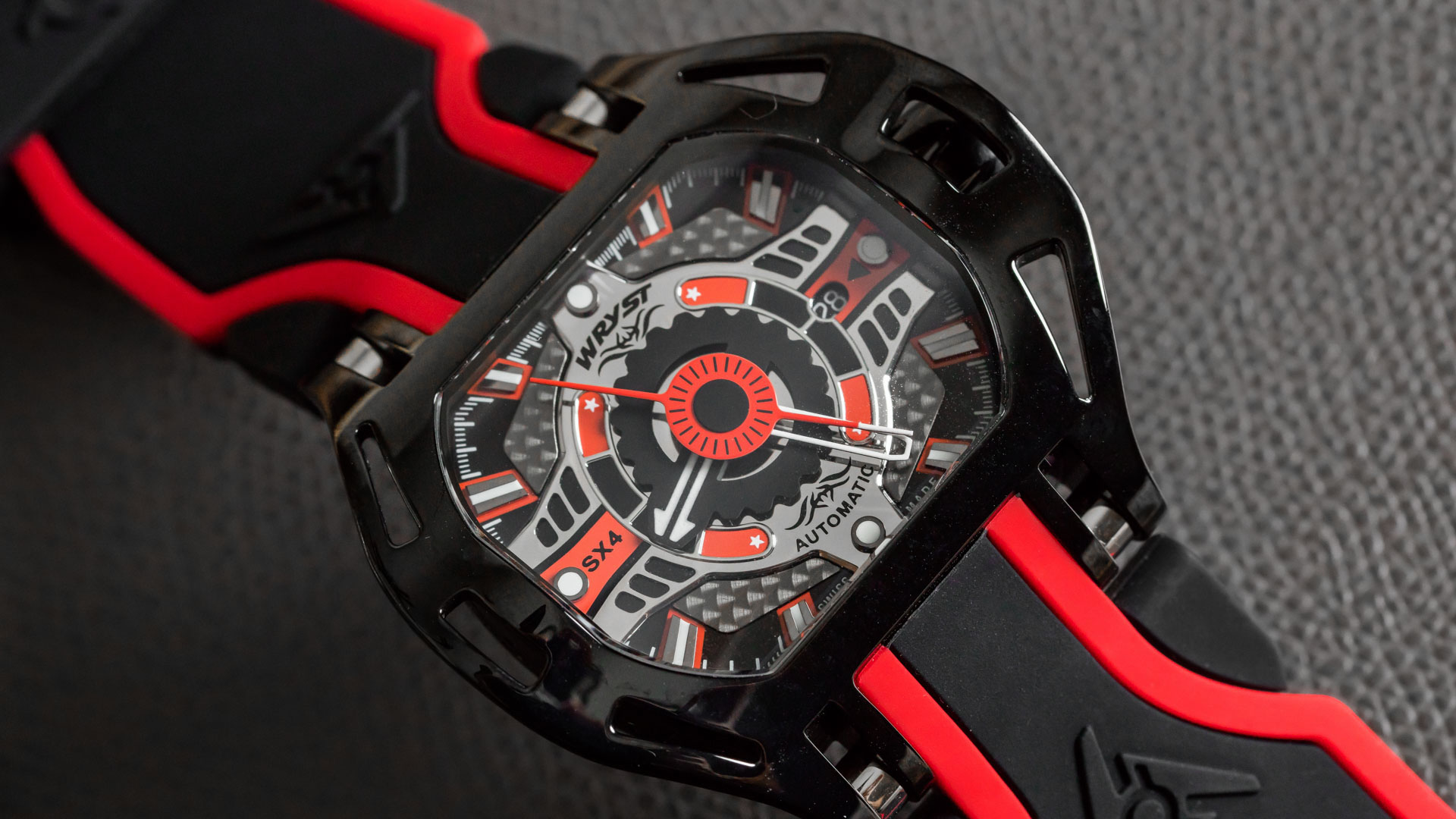 Easily one of the strangest watches to don my wrist in 2018 was the Wryst Racing Automatic SX4 “Wryst Racer” limited-edition timepiece. This is the rather limited automatic mechanical model in the larger Wryst collection, which includes three-hand and chronograph quartz models. I’ve known the proprietor of Wryst watches for a few years now and have always been humbled by his tireless artistic vision and entrepreneurial spirit. The Wryst Racing Automatic SX4 is a watch into which a lot of effort has clearly been put, and it is inspired by “motorsports and racing sports” — something many watch-lovers also enjoy. That said, this is anything but your typical “motorsports-inspired sports watch,” and its appeal will be strictly niche (seemingly, by design). 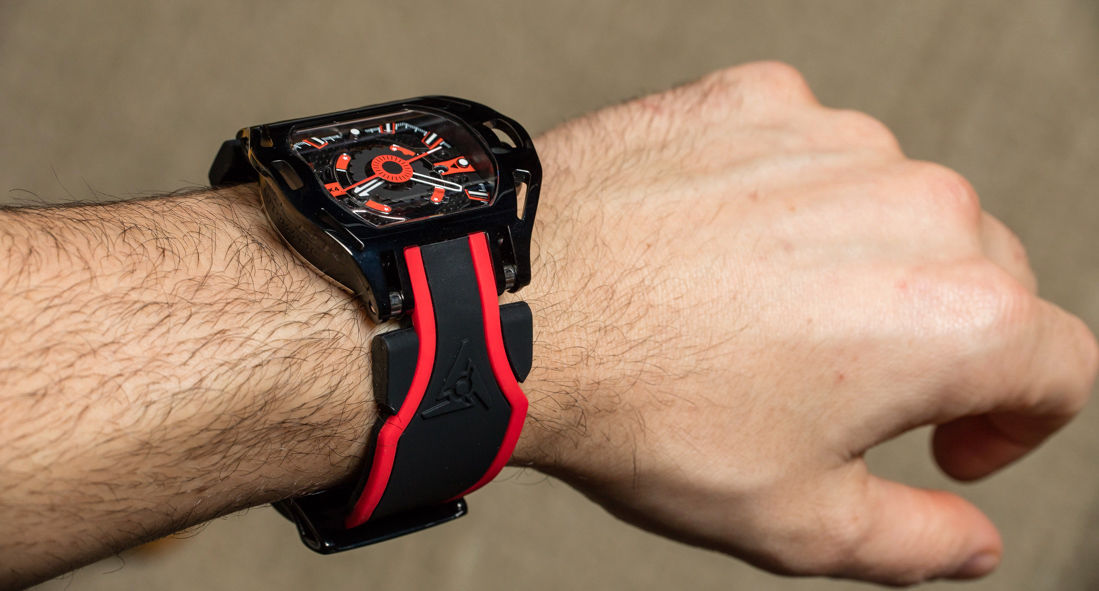 I’m not the target demographic for a watch like this and, frankly, it is too large to be proportionally attractive on my wrist, given the strap. Wryst uses descriptions like “uniquely aggressive and brutal design” and “bold, brutal, and mega-cool” to describe how it feels about the Racing Automatic SX4. I’m not sure I disagree, per se, though I don’t know if I would personally use those statements to describe a watch I actually want to wear. However, there are some genuinely good ideas in the SX4, and the attention to detail is much appreciated, at the very least. A product like this proves that a certain level of refinement is needed to make novel wrist watch shape designs work — and at the Wryst Racing Automatic is certainly original, in almost all aspects. 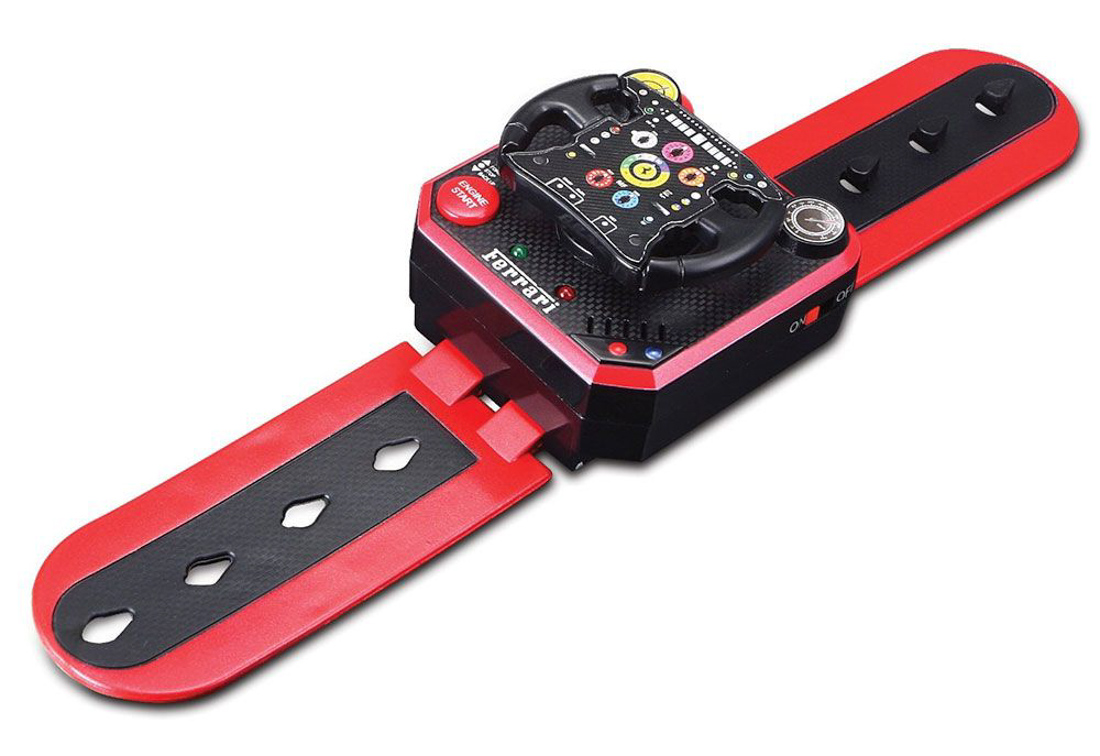 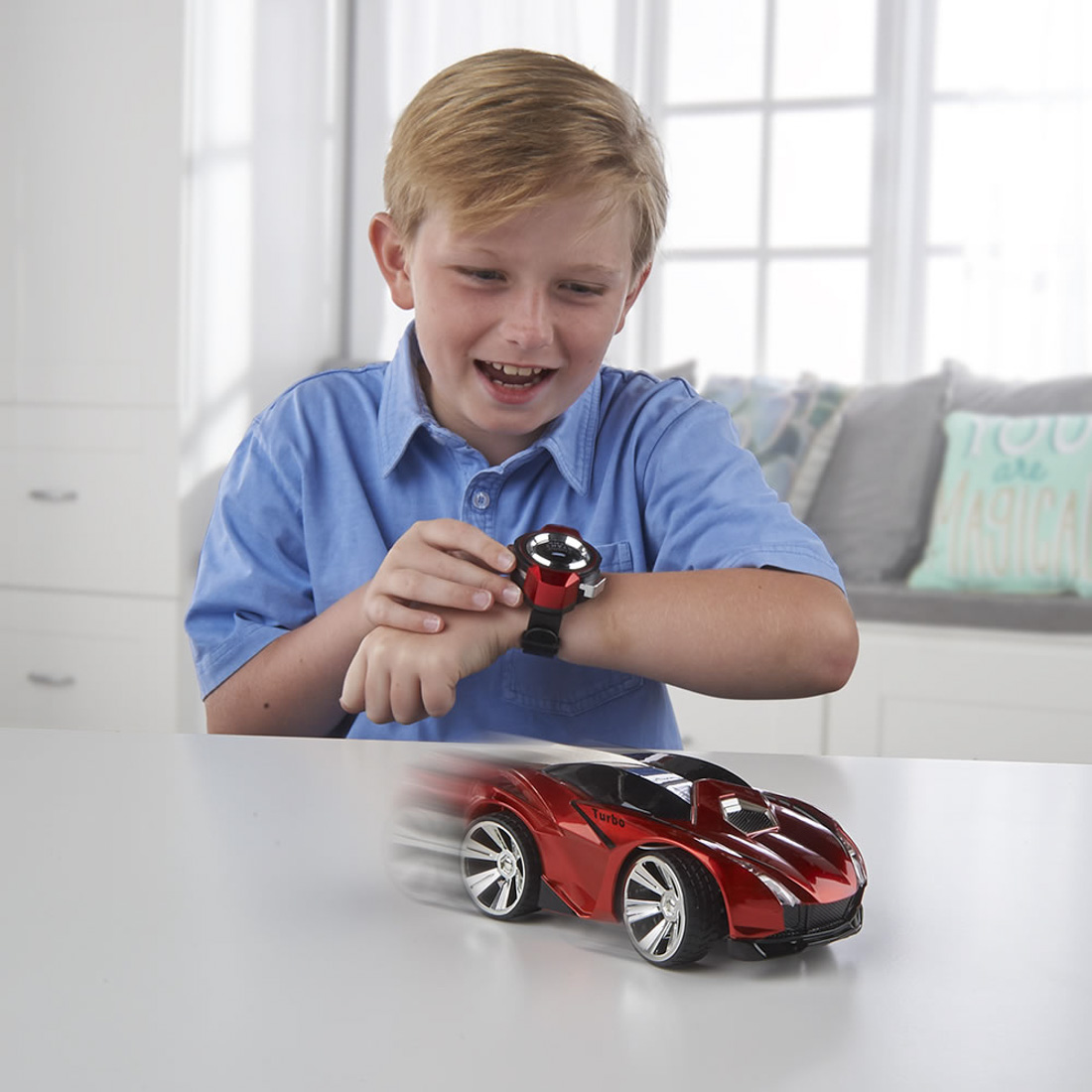 The 50mm-wide steel case isn’t actually too large for my wrist, given that the case is not round and the lug-to-lug distance is closer to 48mm. What does make the watch a bit challenging for me to pull off is the roughly 17mm of case thickness, as well as the very wide proportions of the strap (especially the buckle). I’m not a huge fan of buckles and straps that are nearly as wide as the case, itself. The steel buckle alone is 30mm-wide — and that is, possibly, the largest buckle I’ve ever seen on a watch. Even though the case is 50mm-wide, the entire assemblage on the wrist, with the very thick (in my opinion) strap makes this timepiece best suited to larger wrists, where the overall footprint of the Racer Automatic would be diminished a bit. Those who are drawn to this watch will know it right away. 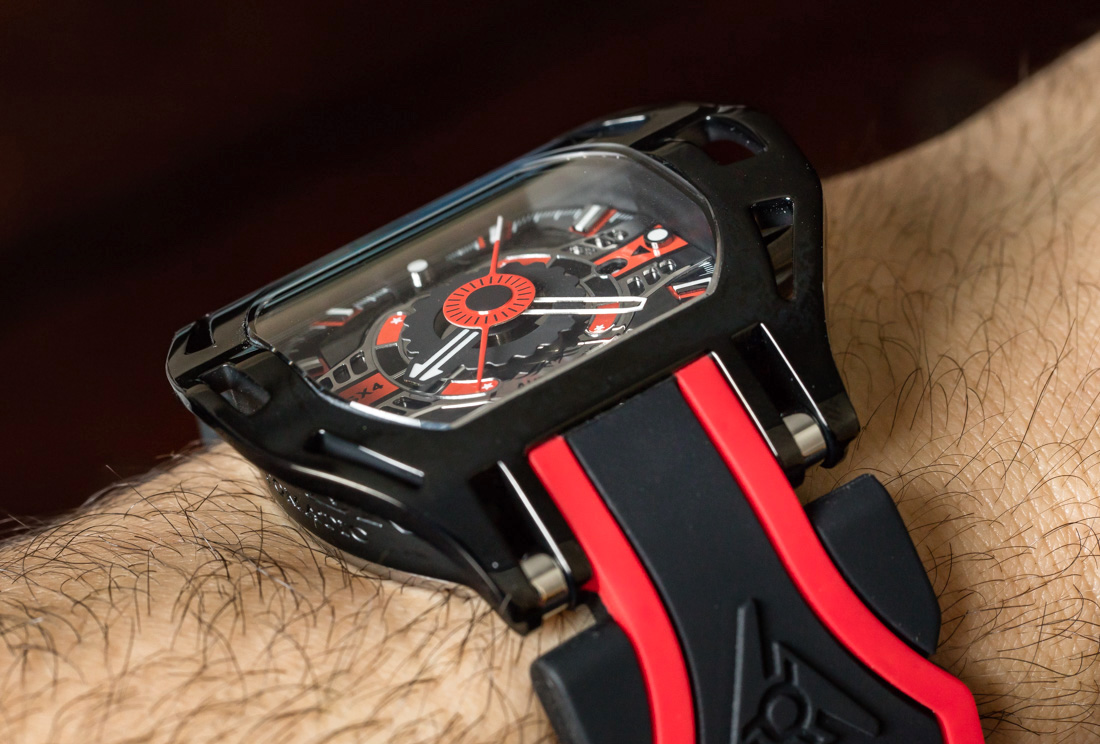 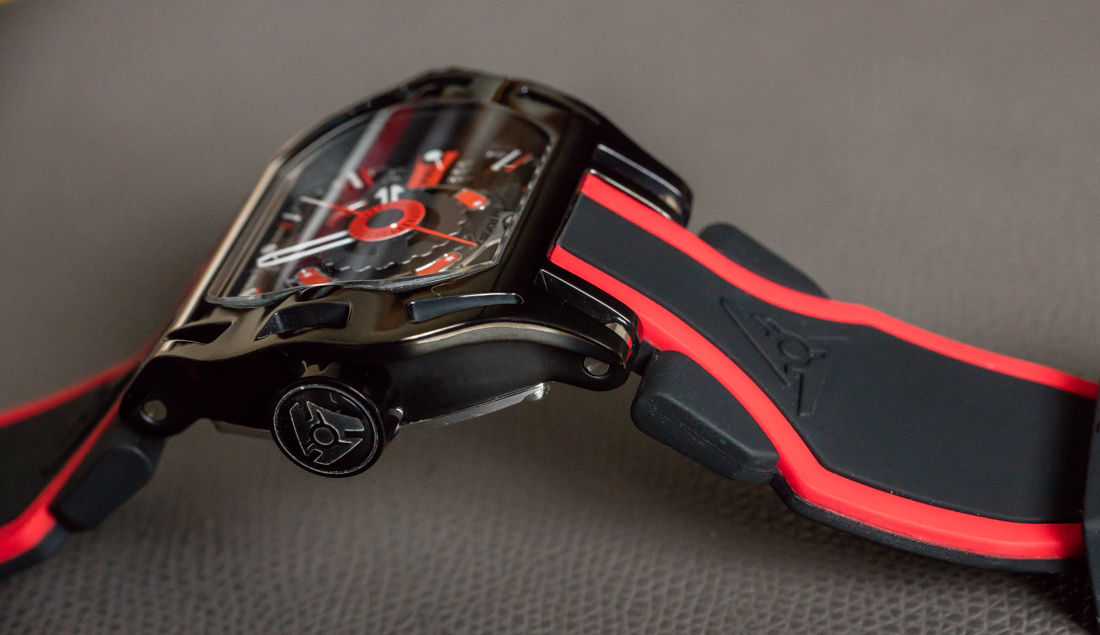 What I find fascinating is the question of where this design came from. Wryst gets a bit more specific and claims that its timepieces, with the distinctly wide case shape and the overall brand theme, are inspired by the Isle of Man TT race. That doesn’t really tell me too much, visually. What is more interesting is that on the side of the case is written “Racer Automatic” (in a totally different font), but “Racer” isn’t an official part of the watch name. “Wryst Racer” is a nice, catchy name but I believe for legal reasons, Wryst was not able to publish the “Wryst Racer” term, perhaps because it is too close to “Wrist Racer,” which is owned by someone else. I did some research and found a series of toys from the early 1980s up to the present that are “wrist racers.” Some of these products even have visual designs that aren’t too far away from the Wryst Racing Automatic SX4. It leaves open various questions about what inspired the design. 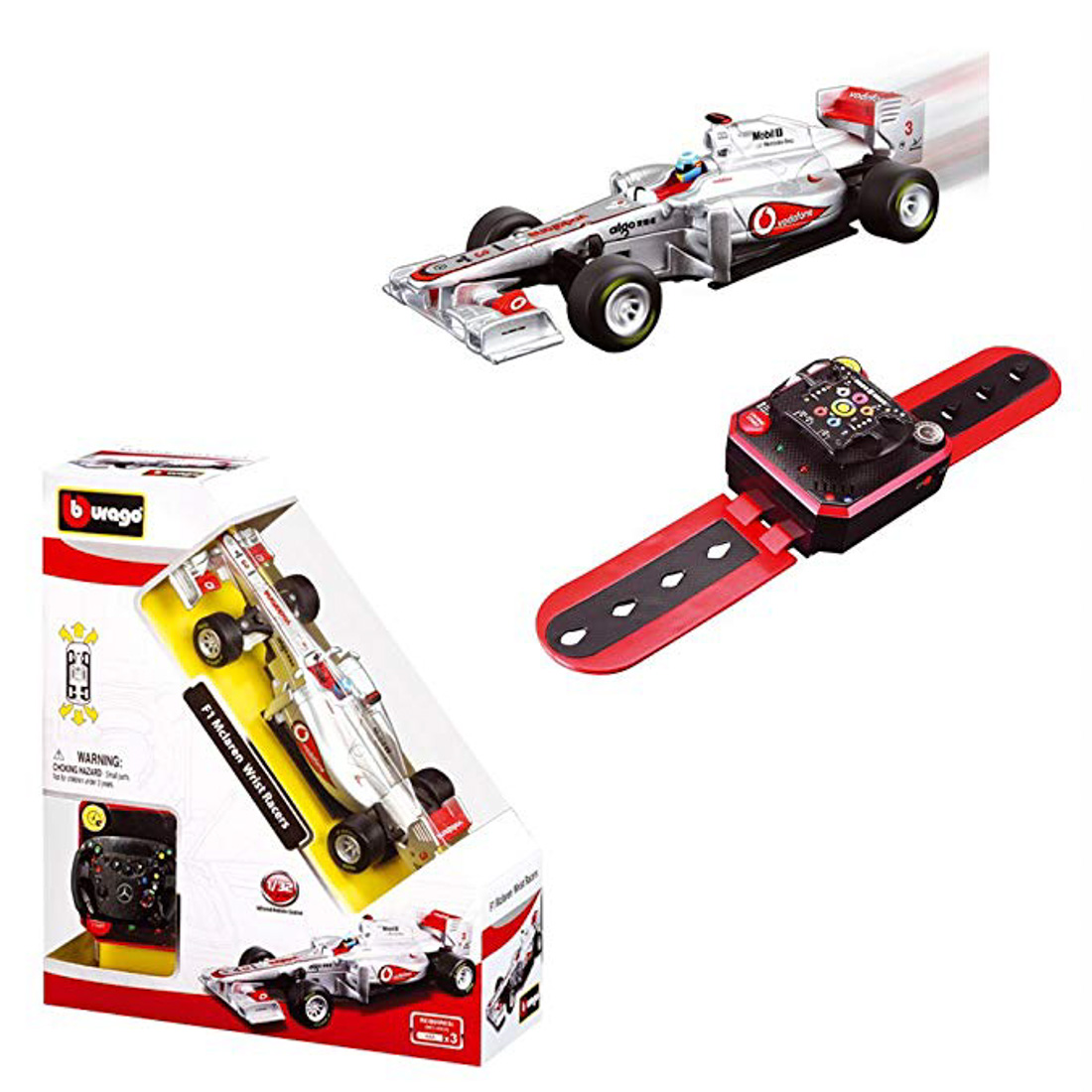 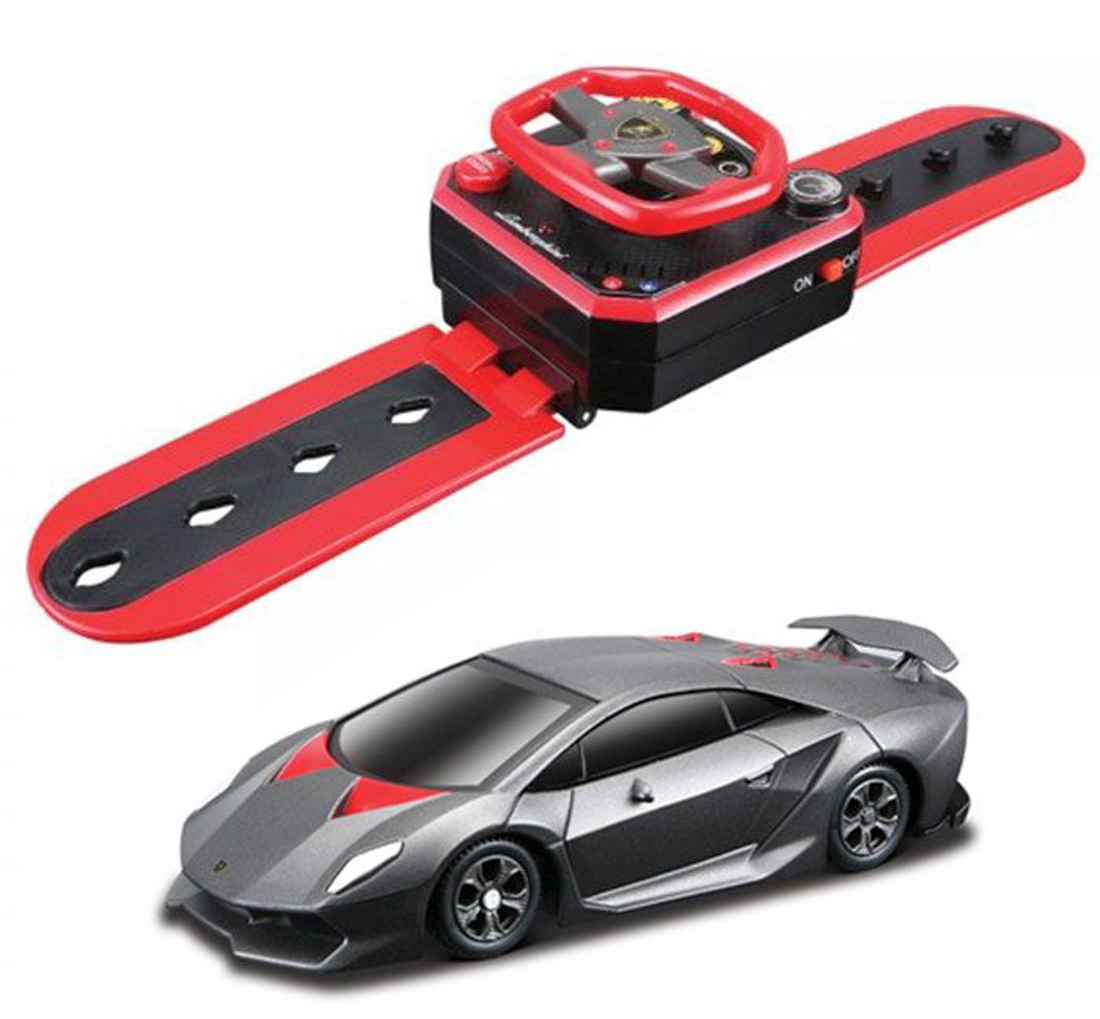 I think it is safe to say that the wide case, with its skeletonized flanks, is directly inspired by oblong race car steering wheels. Not that the aesthetic integration is particularly neat, but I think it is where the overall case design comes from. The dial of the SX4 is said to also be inspired by engines and other implements of racing machines (though, for me, while the dial is interesting from a functional perspective, it is all over the place). But the design is far too removed from being related to a tool or instrument that I feel it is just overall trying to celebrate visual racing themes, while not being an effective dial for telling the time. Wryst makes a big effort to include a series of colors, textures, and levels, and also gets playful in areas such as connecting the hour hand to a gear-style disc and having a double-sided seconds hand. All of this is decently executed but the result doesn’t feel very cohesive and leads me to ponder questions such as, “Why exactly is there ‘tribal tattoo decor’ on the dial — just for the hell of it?” 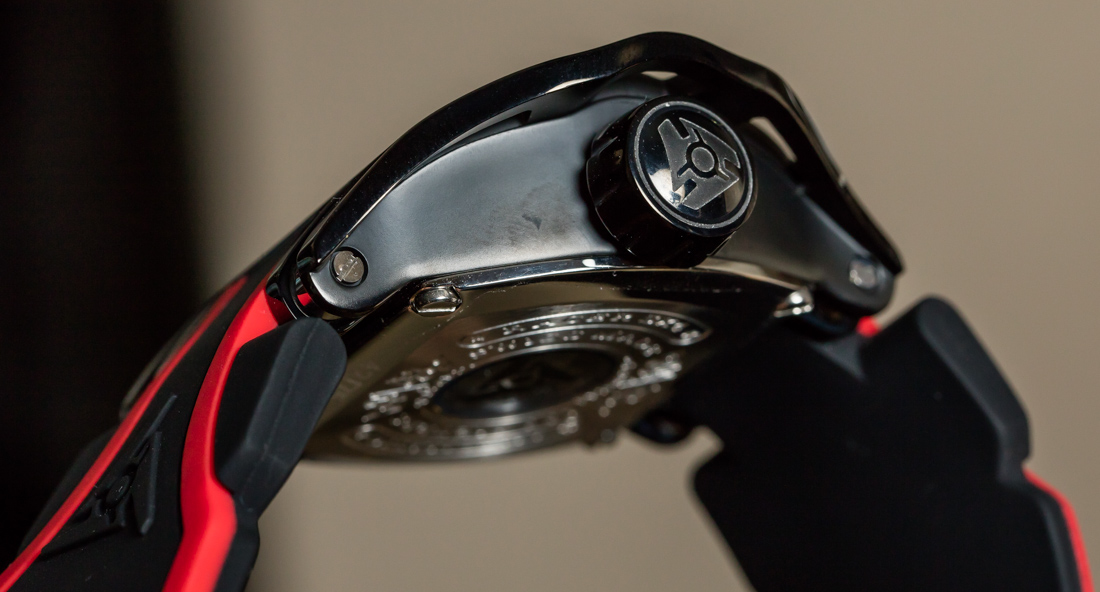 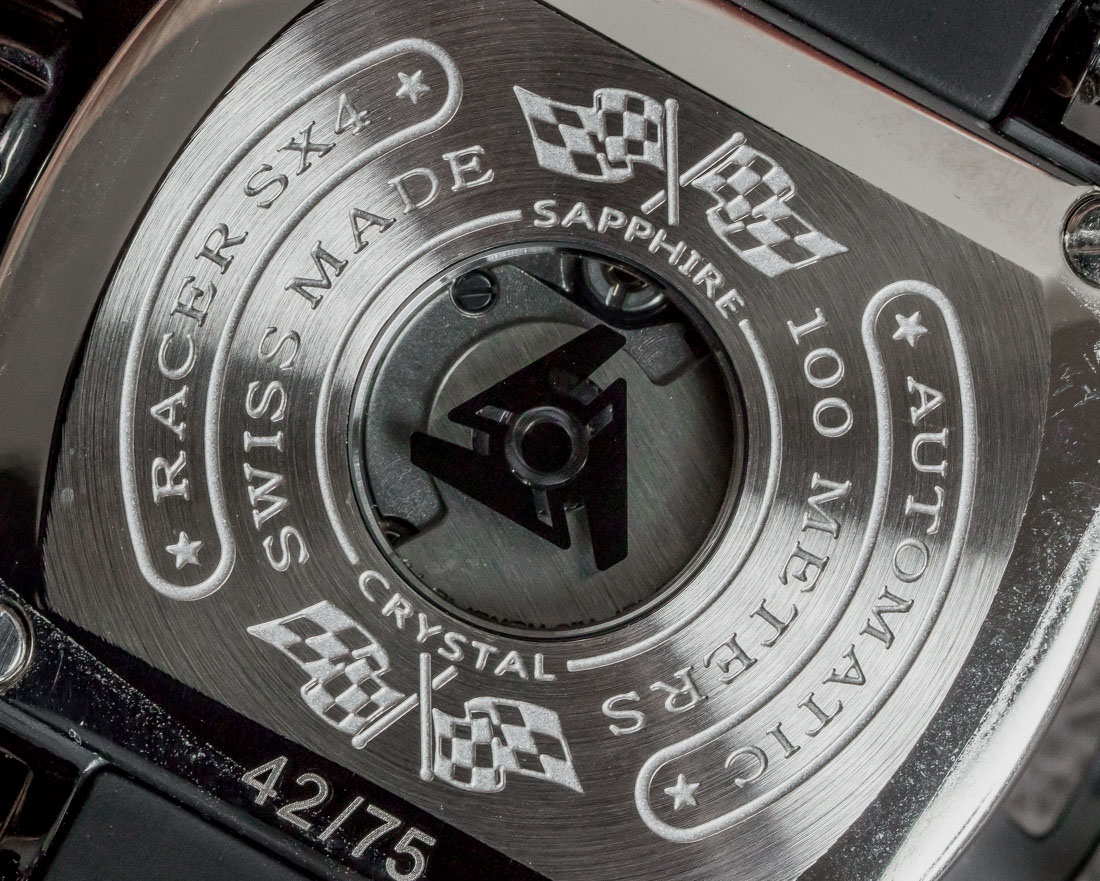 Inside the Wryst Racing Automatic SX4 is a Swiss Sellita SW200 automatic movement (similar to the ETA 2824). The 4Hz, roughly two-day power reserve movement is partially visible through a crystal window on the rear of the watch. Over the dial is another sapphire crystal, which is both custom-made and curved. The case itself is black DLC-coated steel and done rather well. DLC is a very scratch-resistant coating, and the top of the case is polished while the sides are more satin-finished in design. The rear polished steel caseback of the watch has more random motorsports design cues intended to make serious racing enthusiasts feel more at home, I suppose. 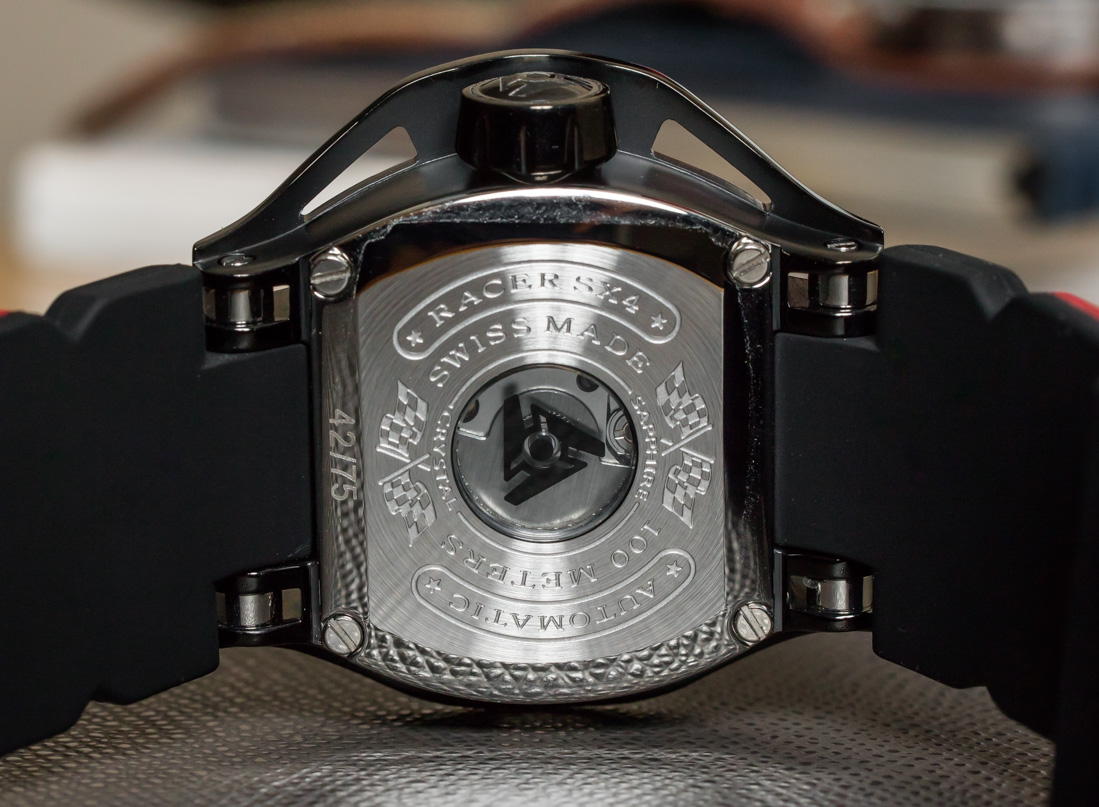 The steel case is also water resistant to 100 meters and has a screw-down crown. While I’m not exactly sure what active sport would merit wearing a Wryst Racing Automatic, but the brand did seem to design a decent level of durability into this watch. On the smallest hole, the two-tone black and red silicon strap was a bit too large for me. I actually like the look of the strap with its Spiderman logo-style “legs” in red; I don’t, however, like the large size of the strap or that there is a large gap between where the strap doesn’t connect to the case and the case, itself. I think with a more elegant integration into the case and better proportions, the strap concept would have looked a lot nicer with a case of this style. 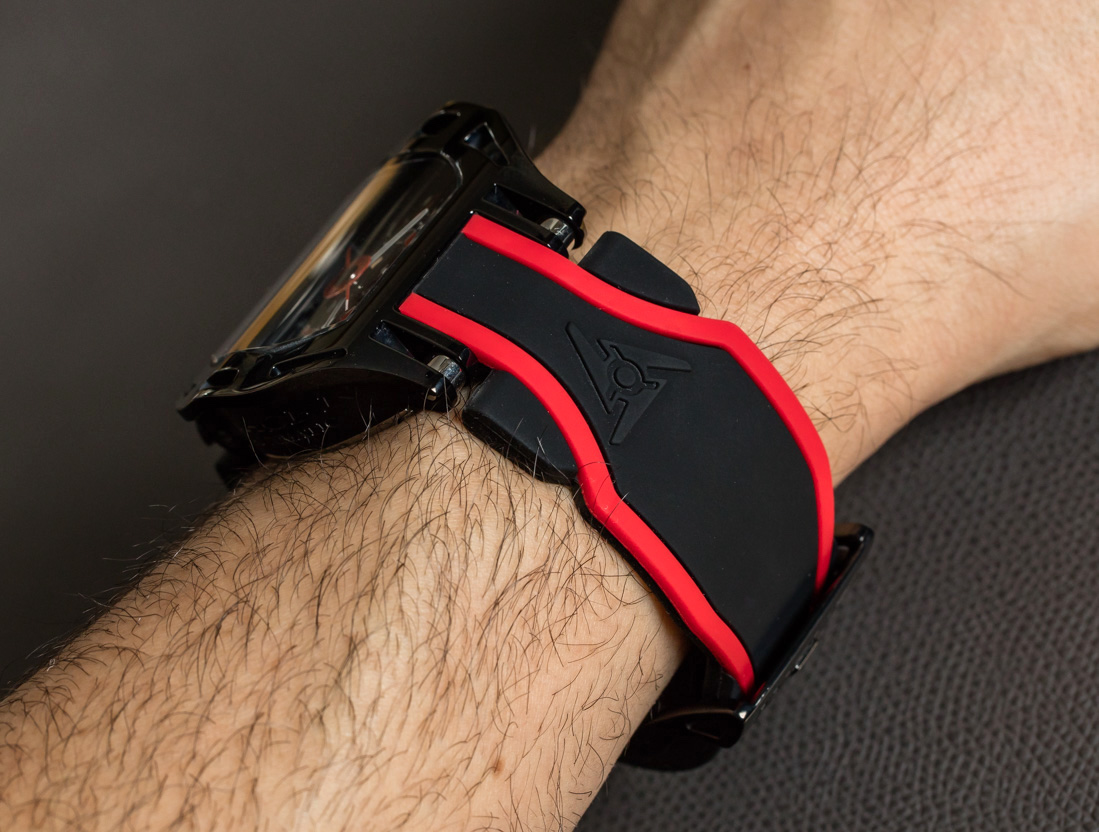 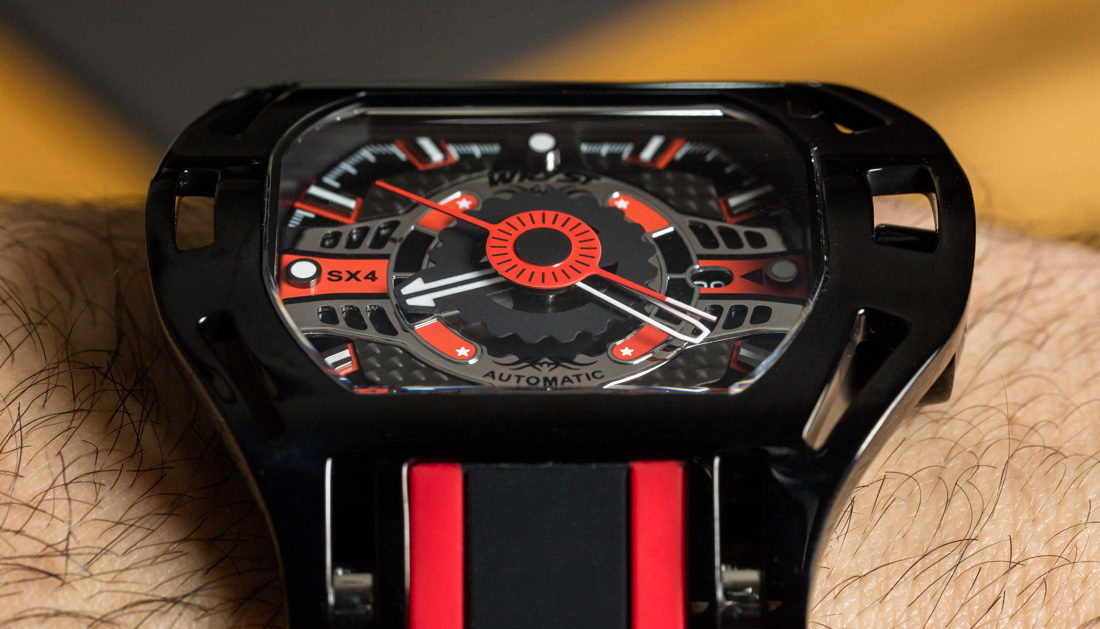 Each of the four Wryst Racing Automatic watches (the SX1, SX2, SX3, and SX4) is a limited edition of just 75 pieces. The colors and case coatings vary a bit, which accounts for some modest price differences among them. These aren’t just collectors’ watches, but watches for a very specific niche of timepiece buyers amenable to this design and its aesthetic inspirations. I like how something like this can be borne of an idea and come into execution for such a small number of people. It isn’t for me and, as a tool or instrument to tell the time there are certainly some issues. But if you don’t want to spend oodles of cash for something even more high-end and obscure, then the roughly $1,700 price of a Wryst Racing Automatic isn’t that bad. The price for the Wryst Racing Automatic SX4 limited edition watch ()75 pieces is $1,726 USD. Learn more or order at Wryst Timepieces here.