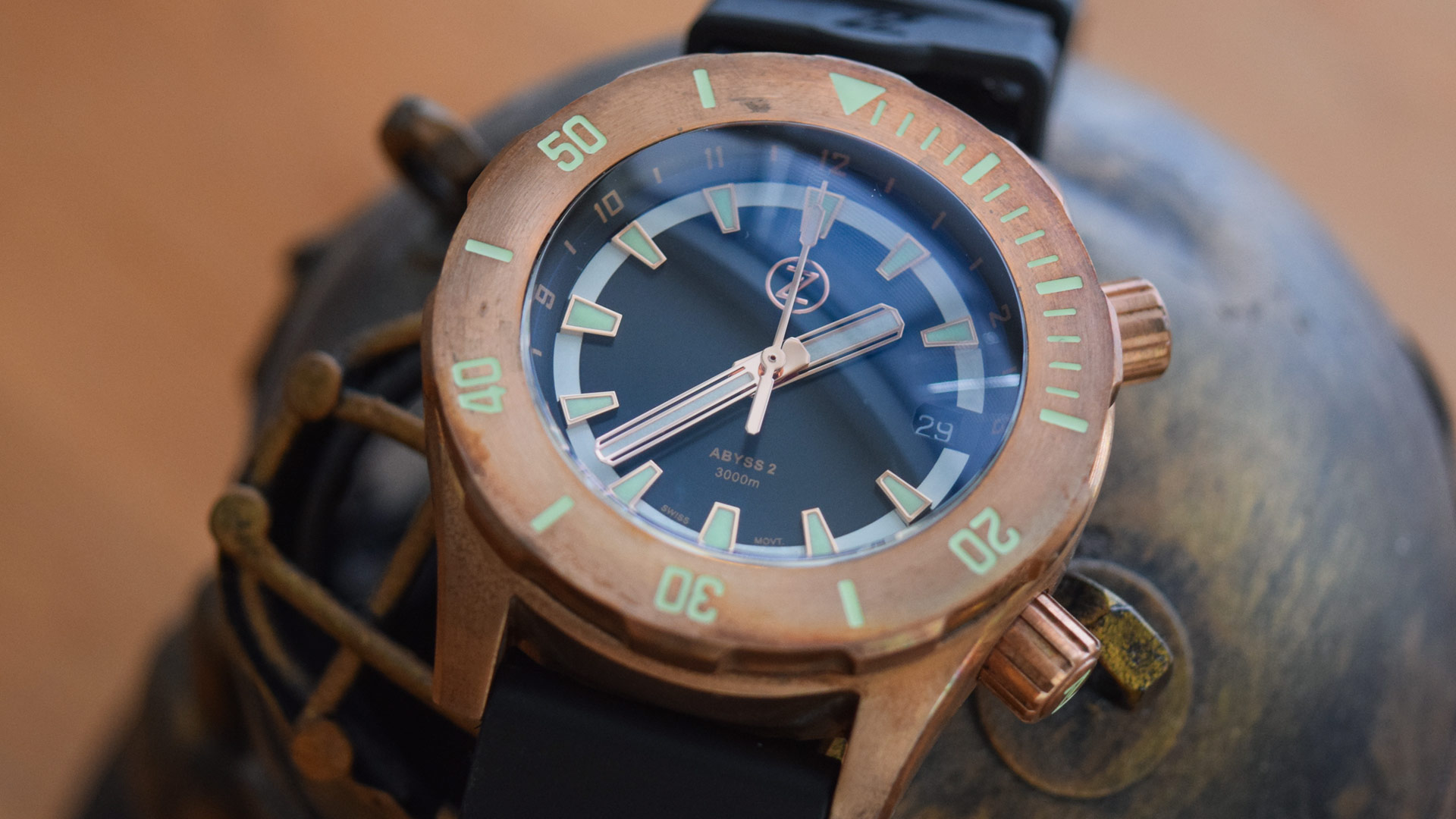 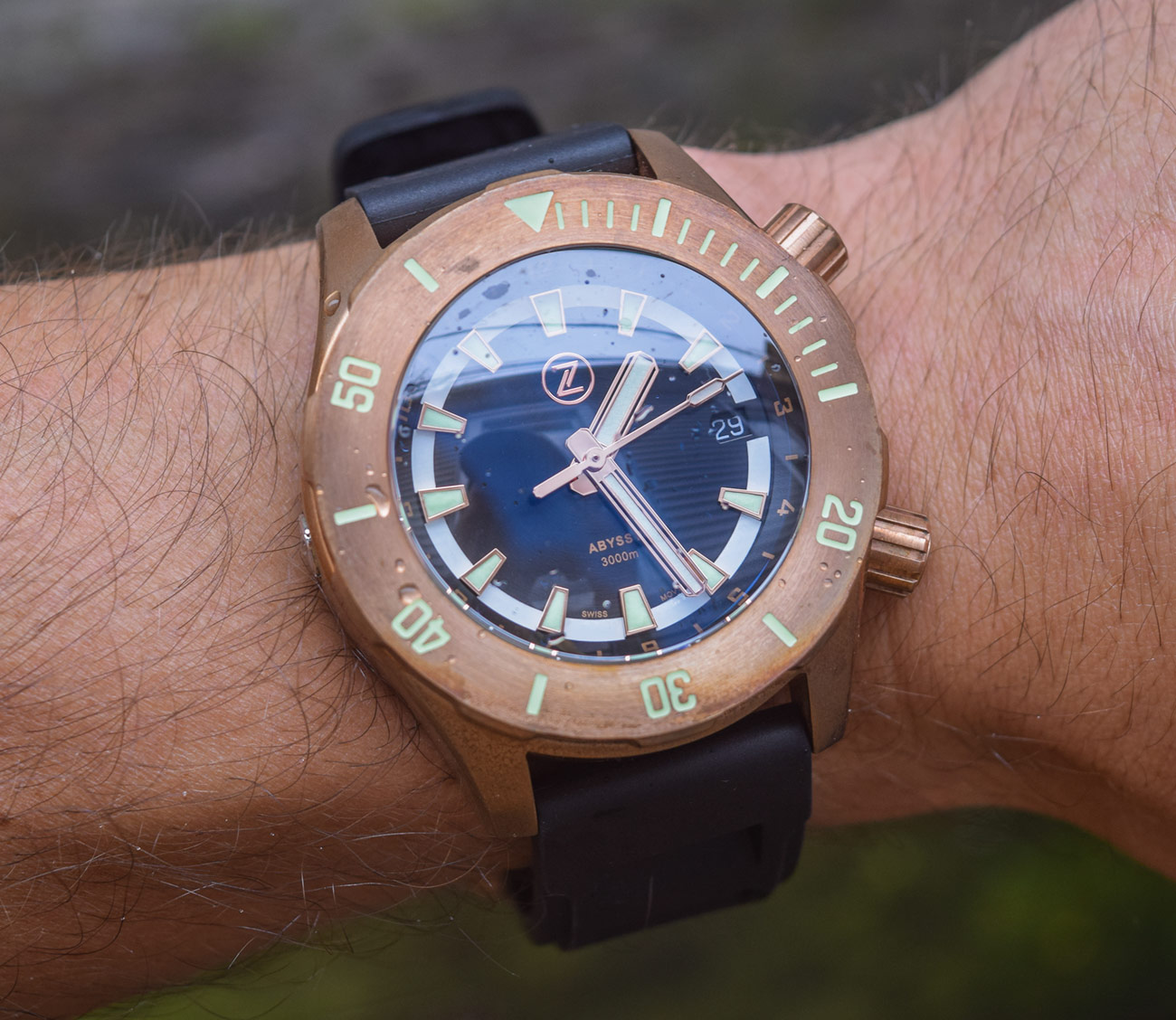 Kickstarter-fueled Zelos Watches, purveyors of technologically driven divers built from on-trend materials like bronze or titanium, have updated their popular dual crown diver, the Abyss, a watch built to function flawlessly under 3,000 meters of pressure. The Zelos Abyss 2 is a twin-crown, bronze-cased, Swiss-automatic-powered diving watch built like a tank in order to achieve the extreme water resistance. More than a simple cosmetic update, the Abyss II now features a second time zone function and an updated look. As a commercial diver and general ocean nerd, I jumped at the chance to review the Abyss 2. Now that I’ve been wearing it for a few months, I’m ready to review the bronze sea monster which has visually taken charge of my watch box and wrist. I’ll start with the watch’s most prominent feature, the absolutely ridiculous, completely unnecessary, yet awesome water-resistance rating. 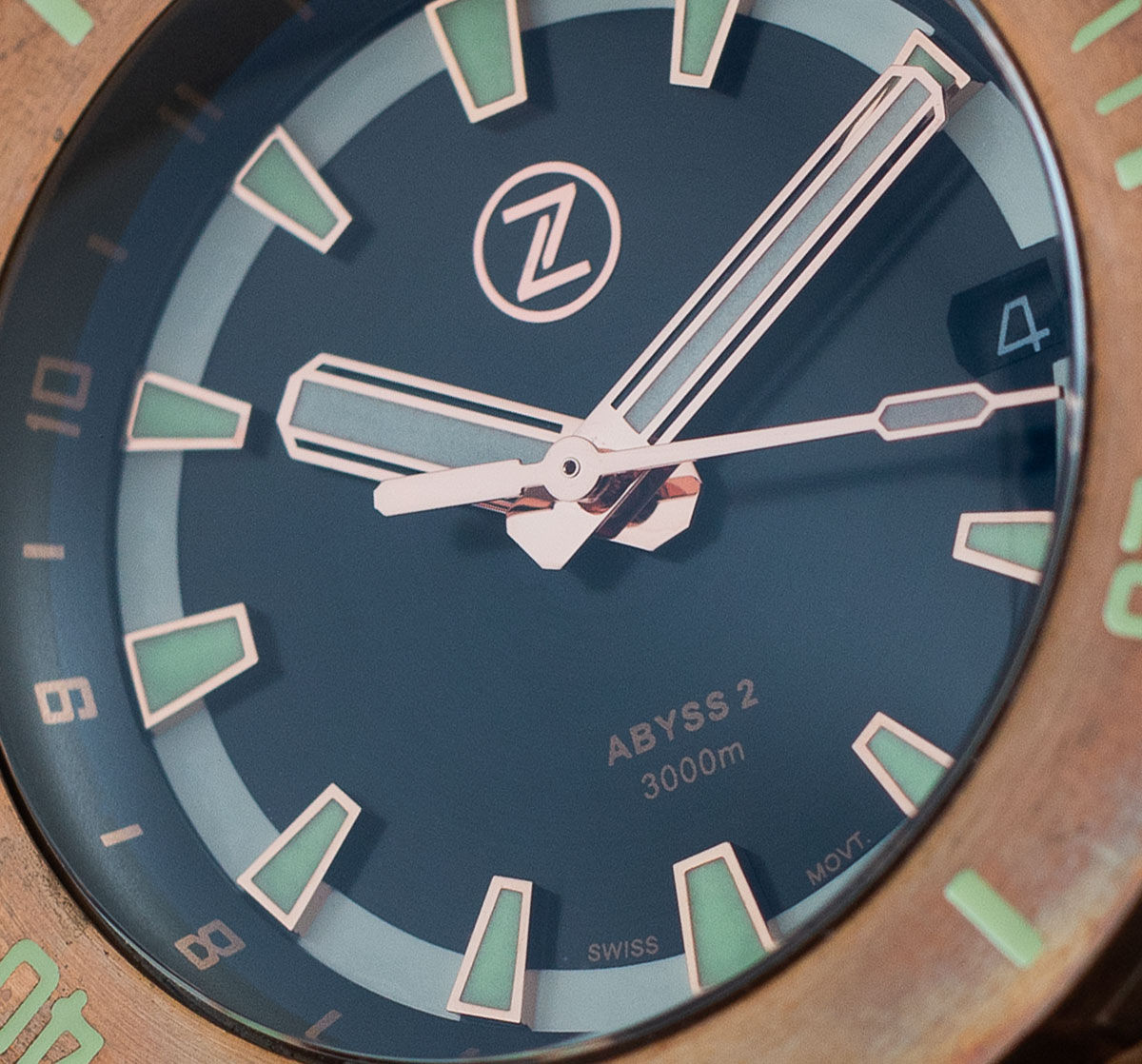 Three-thousand meters beneath rhythmic ocean waves, a world of near total darkness reigns. Only the most carefully adapted creatures dwell there, oddities of nature crafted over millennia of evolution with glowing lures and giant eyes to make use of what little light filters through 9,842 feet of briny deep. Given the immense pressure and technological challenges involved, mankind has only scratched the surface of deep ocean exploration. Submersibles like the Bathyscaphe Trieste, DSV Alvin, and James Cameron’s Deepsea Challenger have visited these depths, their occupants shielded in spheres of steel and plexiglass. Watches have dived this deep as well, with Rolex the front runner in equipping deep-diving projects. With the Abyss 2, Zelos have provided a far lower-cost alternative for those obsessed with depth-oriented diving watch design. 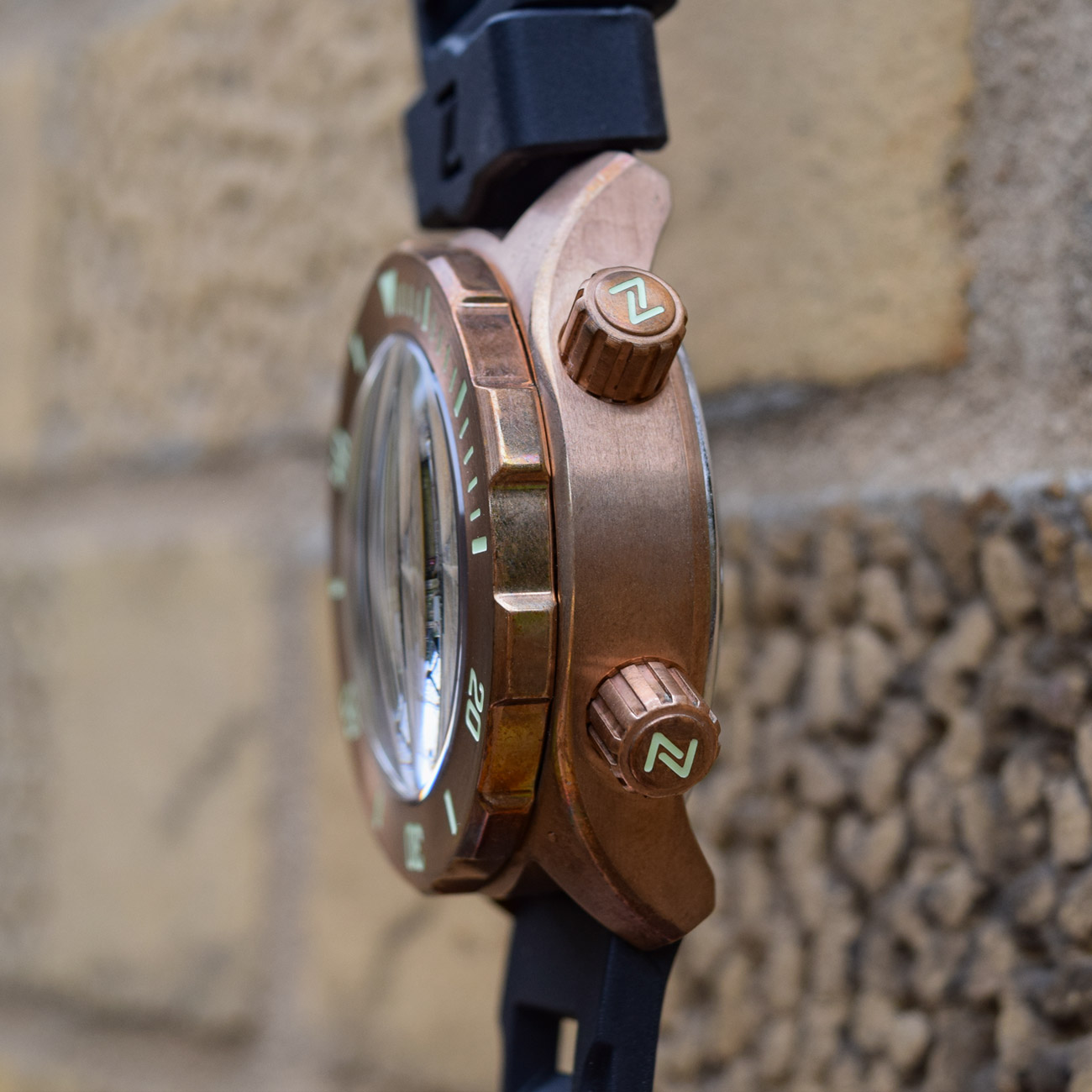 Keep in mind, submersible pilots on projects like these are sitting fairly comfortably at one atmosphere of pressure just as they would on the surface. Watch companies like Rolex strap one of their watches to the outside (see the above linked to James Cameron article), where it does a diver no good, so they can brag that it survived the deep. Unprotected divers don’t go anywhere near this deep, ever. The gnarliest, most barrel-chested commercial divers do routinely work at depths of up to 1,000 feet by means of saturation diving, but that’s still only 300 meters or so, a depth easily reached by many diving watches. The Zelos Abyss 2’s water resistance rating is ten times that. 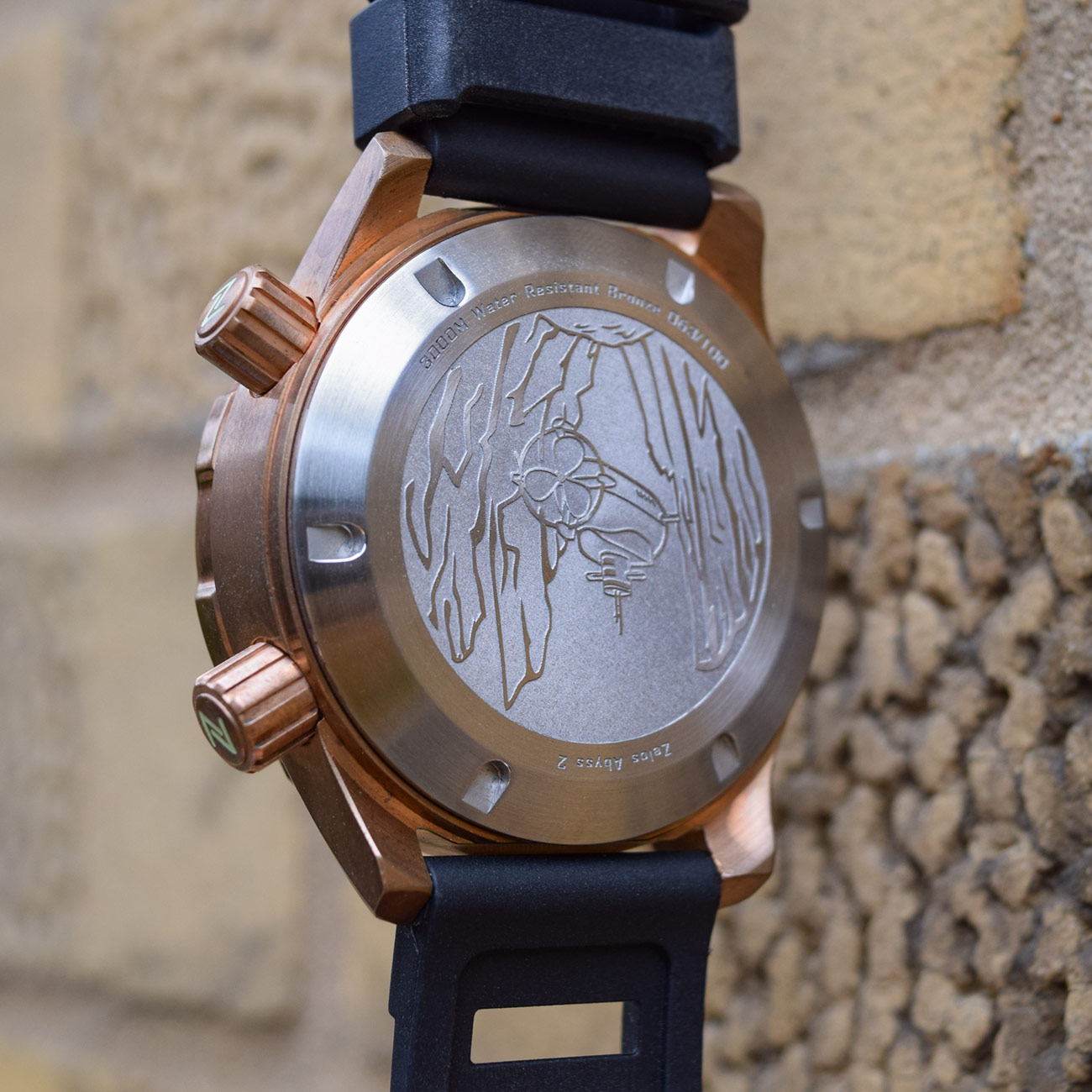 But why, you might ask? I can’t dive there, so why would I need that? Because it’s badass. Because engineering a watch for a specific purpose or set of purposes is what tool watches are about. It’s not about what a watch actually needs to be able to do. Watch tech caught up to and surpassed diving tech in the seventies. It’s about building things which are impressively capable, thanks to the thought that went into them. Our pals at Zelos get that, and they engineered the Abyss 2 because they can and because it’s cool. What you are buying is the thought, attention to detail, and execution which has gone in making the Zelos Abyss 2 the deep diving tank it is. 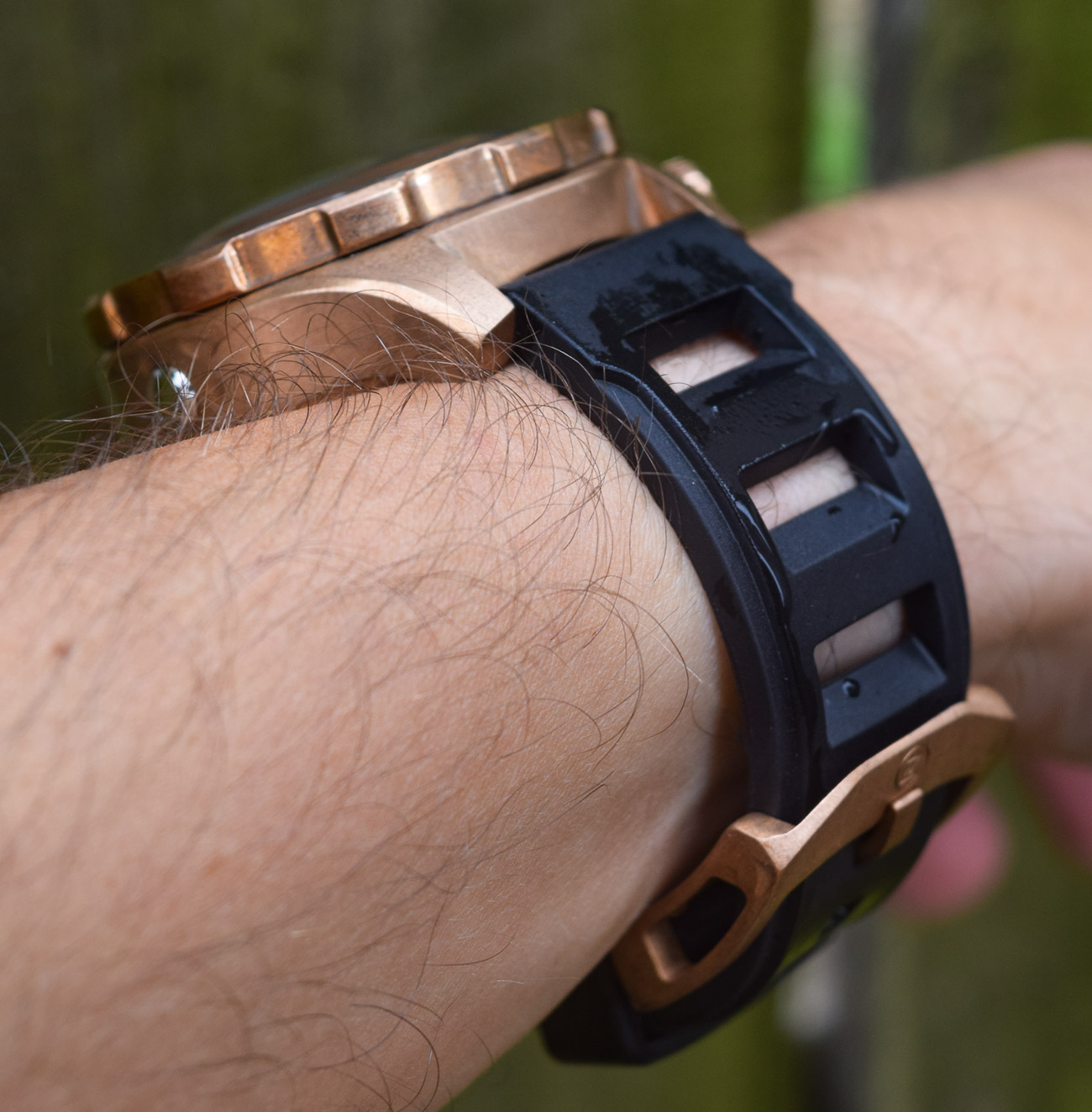 As you’d imagine, given the depth rating, the Zelos Abyss 2’s case is a massive, immensely solid-feeling block of metal. As they did with the previous Abyss, Zelos again elected for their favorite case material, marine-grade CUSN8 bronze, due to its nautical feel and patina-generating surface. The Zelos Abyss 2’s case has a neatly brushed finish on the majority of its surfaces, with small polished areas to play with light. For the money, detail on the case finishing is quite impressive, as are the large twin crowns, now in bronze instead of DLC’d black as in the previous version, and each with deep channels for grip and a rarely seen lumed “Z” signature. 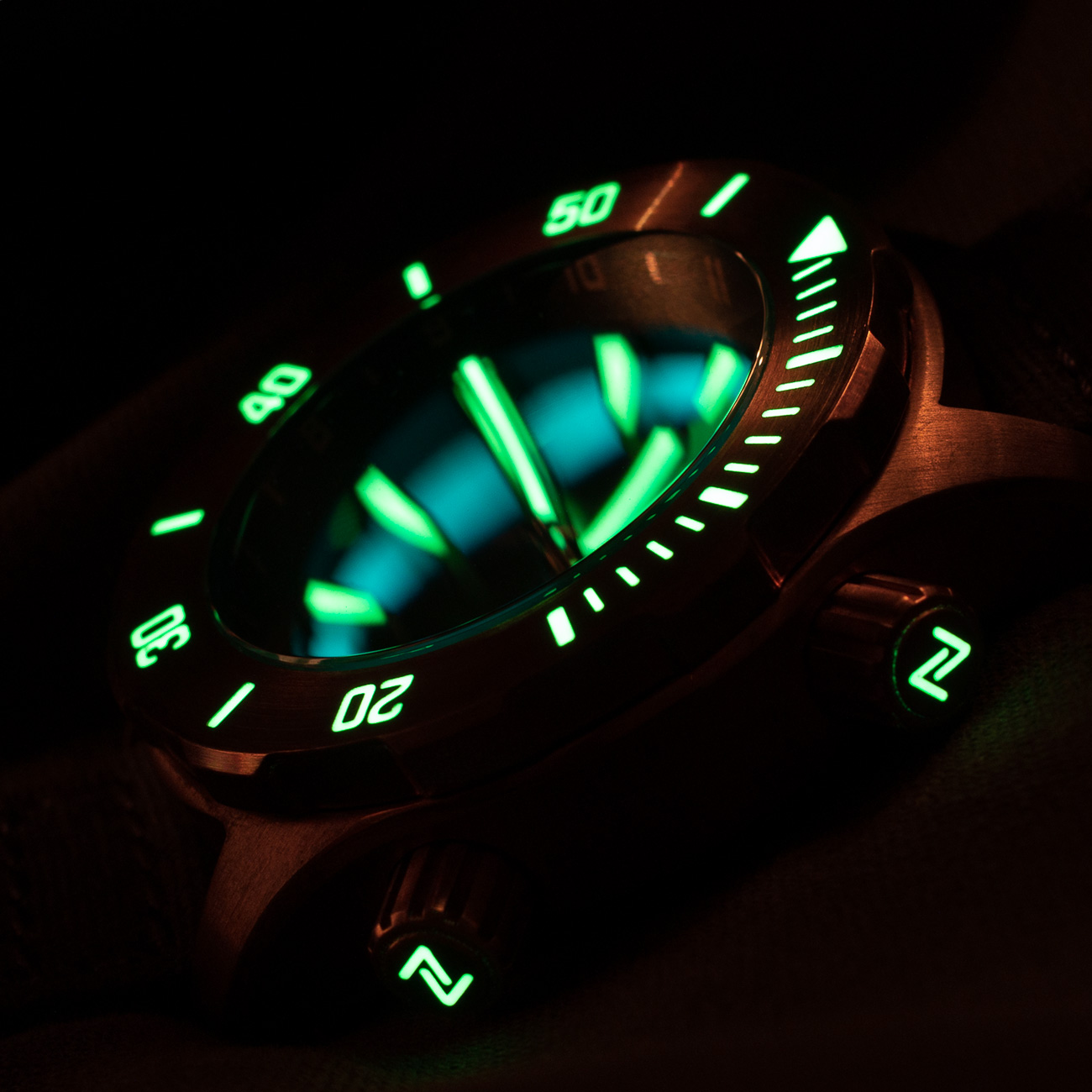 I also really like the stainless steel caseback on the Abyss 2, which features an etched image of a submersible in an ocean cavern. I know they don’t make a lot of difference to most, but I love when brands take the time to do an interesting caseback. With all that’s going on, you could almost miss the steel inset automatic helium release valve at nine o’clock on the Abyss 2 case. While I’ll wager one of these watches will never see its HRV in action, as they are only “required” by commercial divers decompressing inside a saturation system, it’s a nice inclusion and shows just how much thought about being a do-it-all diver’s watch went into the thing. 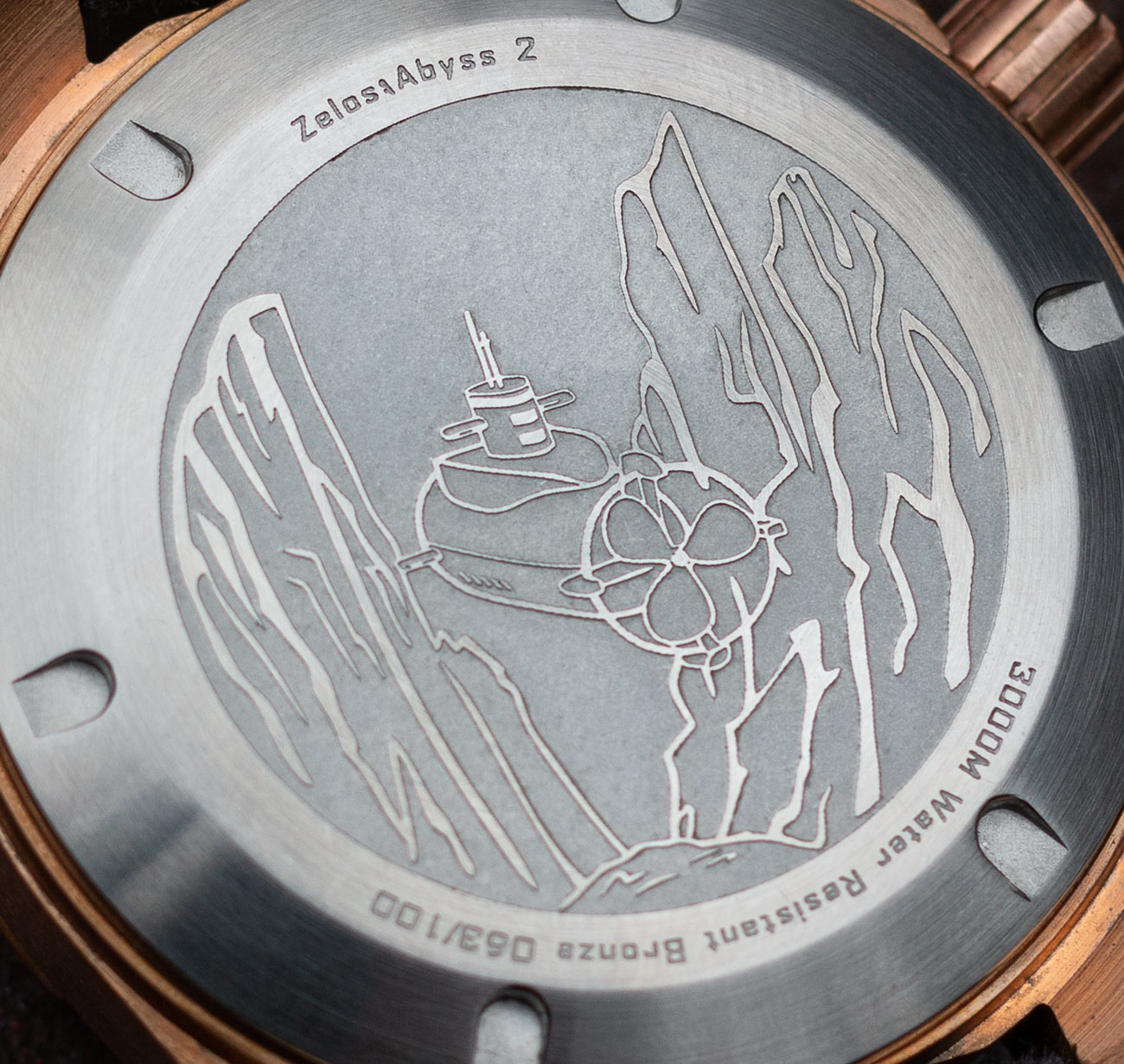 At some point, we have to talk about patina. When I received the Abyss II, I was stunned. It was brightly rose-gold colored, and shining like Flavor Flav’s grill in the early 2000s. For me, that along with the size made it almost unwearable. Off to the internet I went, where I learned I could dull the finish and kickstart the patina with nothing more than a hard boiled egg and a Ziploc. It worked out pretty well, and I’ve waited a bit longer to take photos for this article so you can see how the watch will look at this point of its life. In general, patina is kind of fun, and there are many how-to’s out there for how to change the look of your bronze watch if you’re as impatient as I am. If you’re a salty ocean going person, patina should develop rapidly without outside influence. 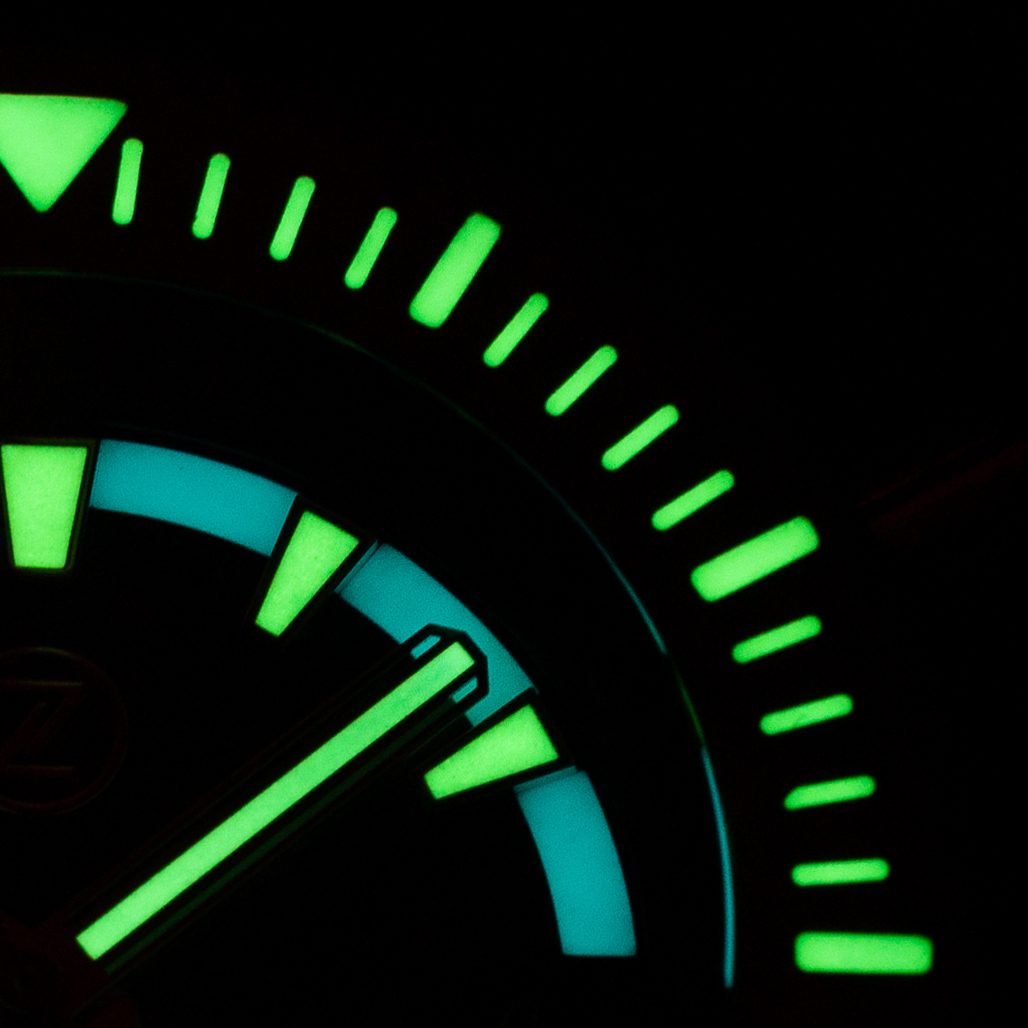 A fully lumed, 4mm tall, 120-click, unidirectional bezel tops off the utilitarian package, and rotates with a positive action and almost no play. Importantly, it also lines up neatly. This is one of my favorite bezels from a micro brand. I’ve tried setting the bezel wearing a variety of different diving gloves and never had a problem grasping or turning it whether wet or dry. Once set, the bezel stays right where you need it, a necessity for those actually timing dives. The Abyss II also shows how a dual crown diver’s watch can be organized to be used without unscrewing a crown to set the elapsed time function. A whopping 7mm thick sapphire bezel, coated on the underside to prevent reflection, is well done and works well with the shape and dimensions of the case. 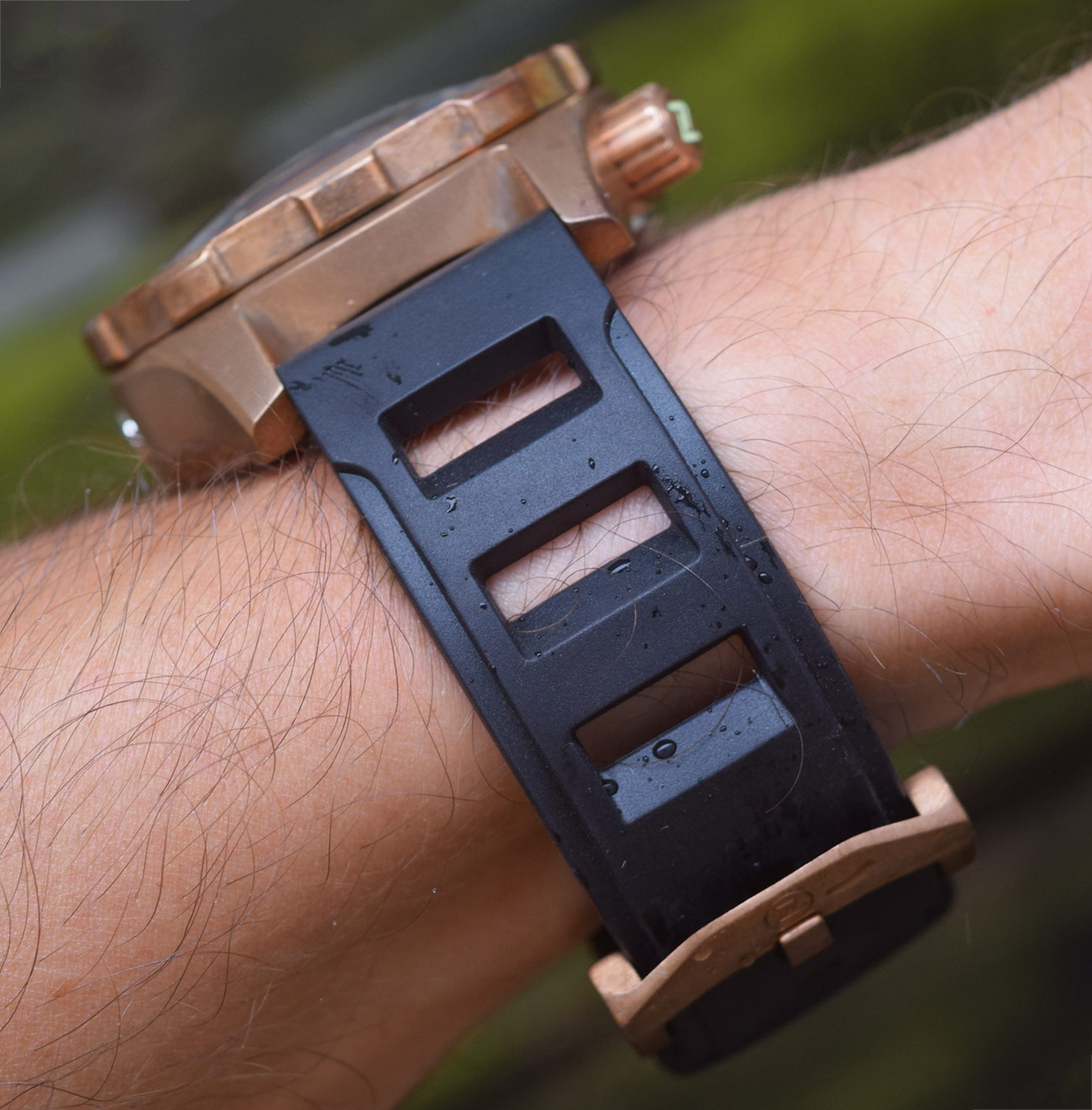 As a final note on the case, the Zelos’ Abyss II is freaking huge, like you can feel it in your arm when you’ve worn it for a few hours (unless you’re strong, I suppose). It’s heavy, 43mm wide, a staggering 19mm tall, 51.5mm long, will invariably damage all nearby door frames and the craniums of passing toddlers, and generally takes some getting used to. I have to wear the watch pretty tightly just to keep it from bouncing around as a watch of this heft can do. It’s so big it’s hard to wear at first but you do get used to it and even come to enjoy the size. 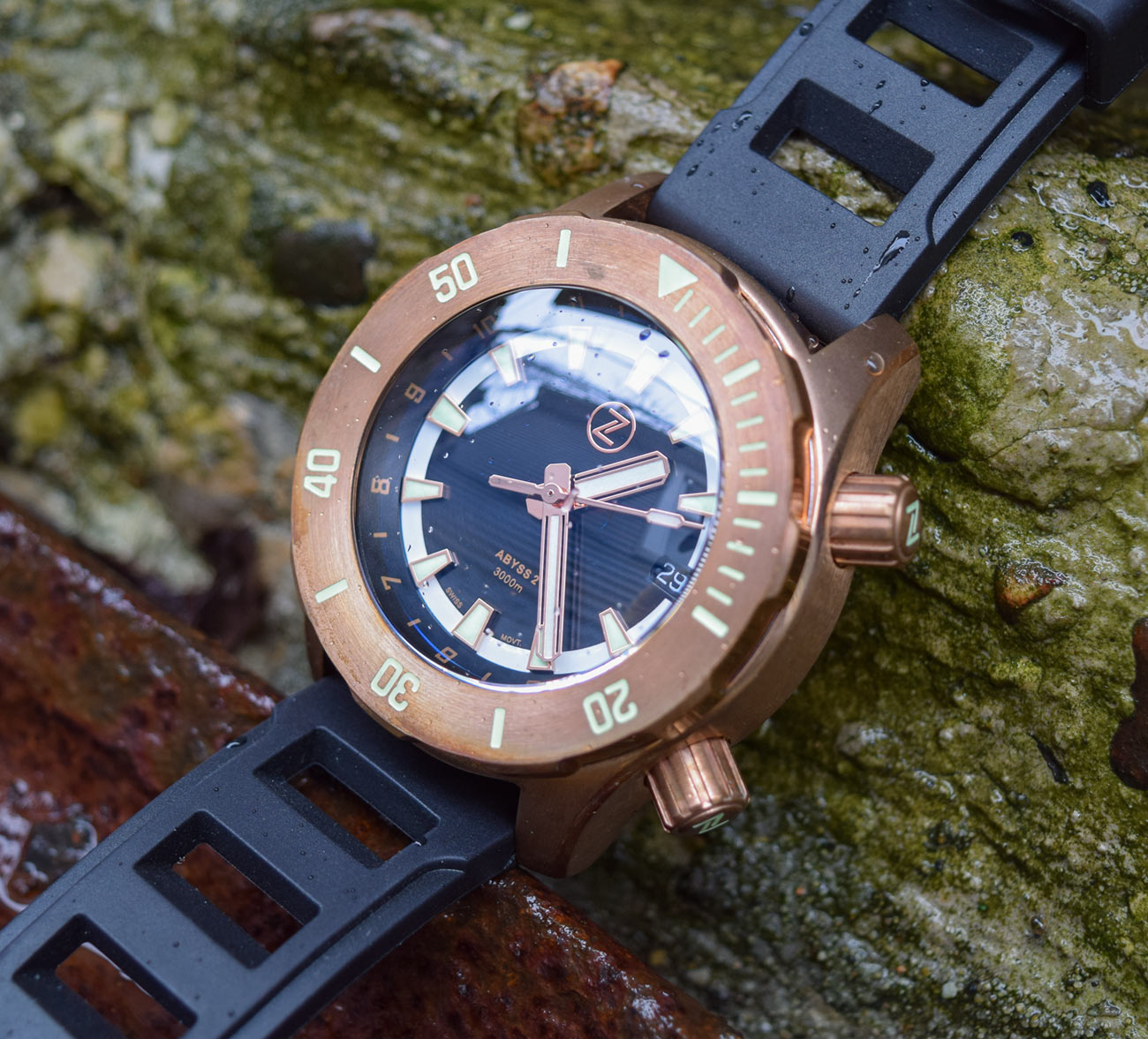 Now, as a disclaimer, I’m a small-wrist-having guy, but I love watches like the Seiko Darth Tuna or the 44mm Panerai Luminor series, and this thing just feels bigger, despite the somewhat reasonable sounding 43mm width. Some of this has to do with the stunning 19mm height, and some of it has to do with the weight. if you didn’t grasp this from what I’ve said already, the Zelos Abyss II is not for the faint of heart or wrist. It will categorically never fit under any shirt or jacket unless you’re into Gandalf-style sleeves. 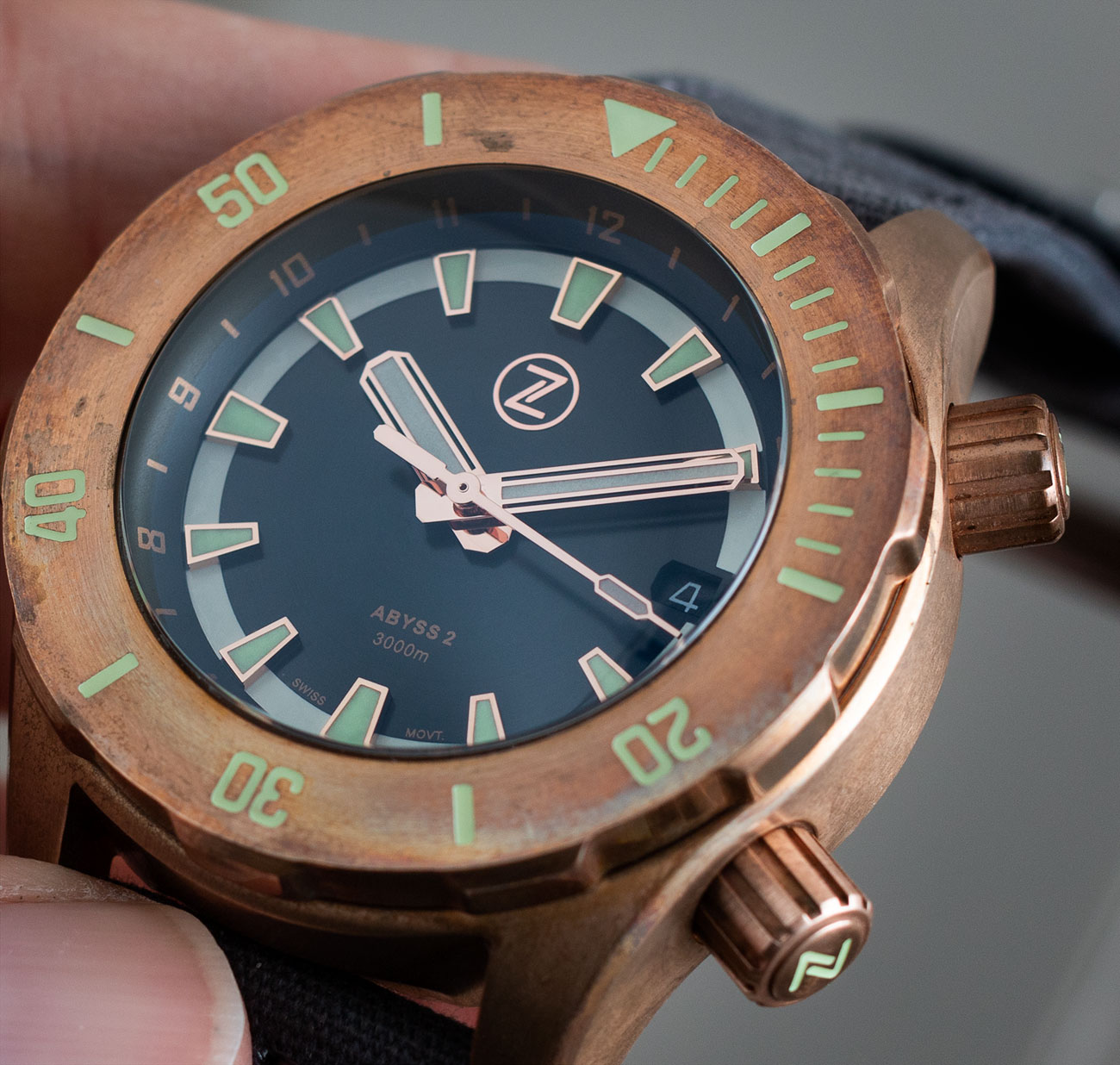 You get it, it’s big. Moving on, the dial is the most updated element on the Zelos Abyss II. While the former was fairly straight forward in design, with some layered elements and a simple chapter ring with minute markers, the new Abyss II dial is more complex and interesting. An inner, nicely done, circular brushed dial sits inside a lumed ring with tall, applied, trapezoidal hour markers rimmed in bronze and filled generously with C3/BGW9 SuperLumoniva. Instead of a standard chapter ring, the Zelos Abyss II has a rotating 12-hour second time zone ring controlled by the two o’clock crown.