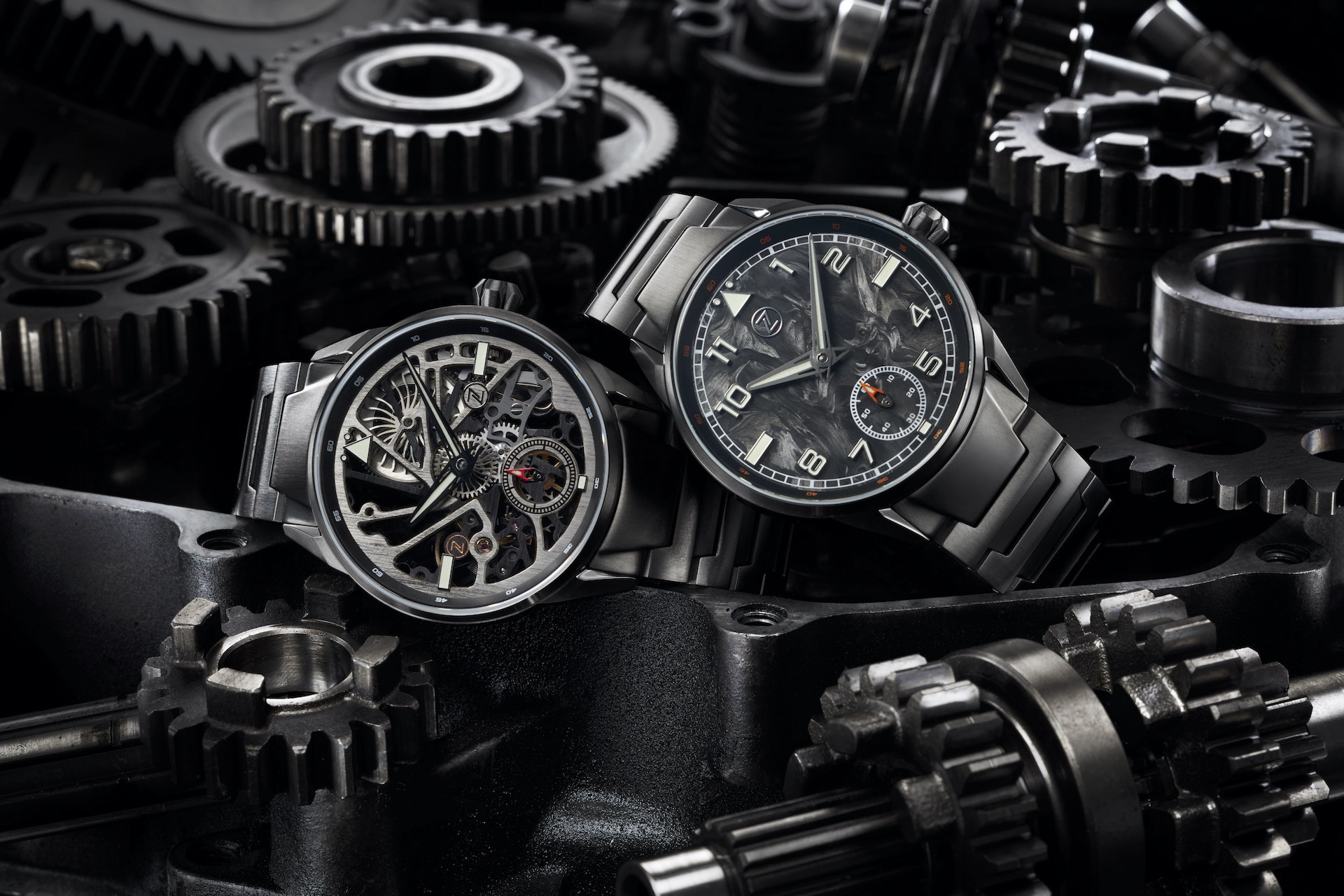 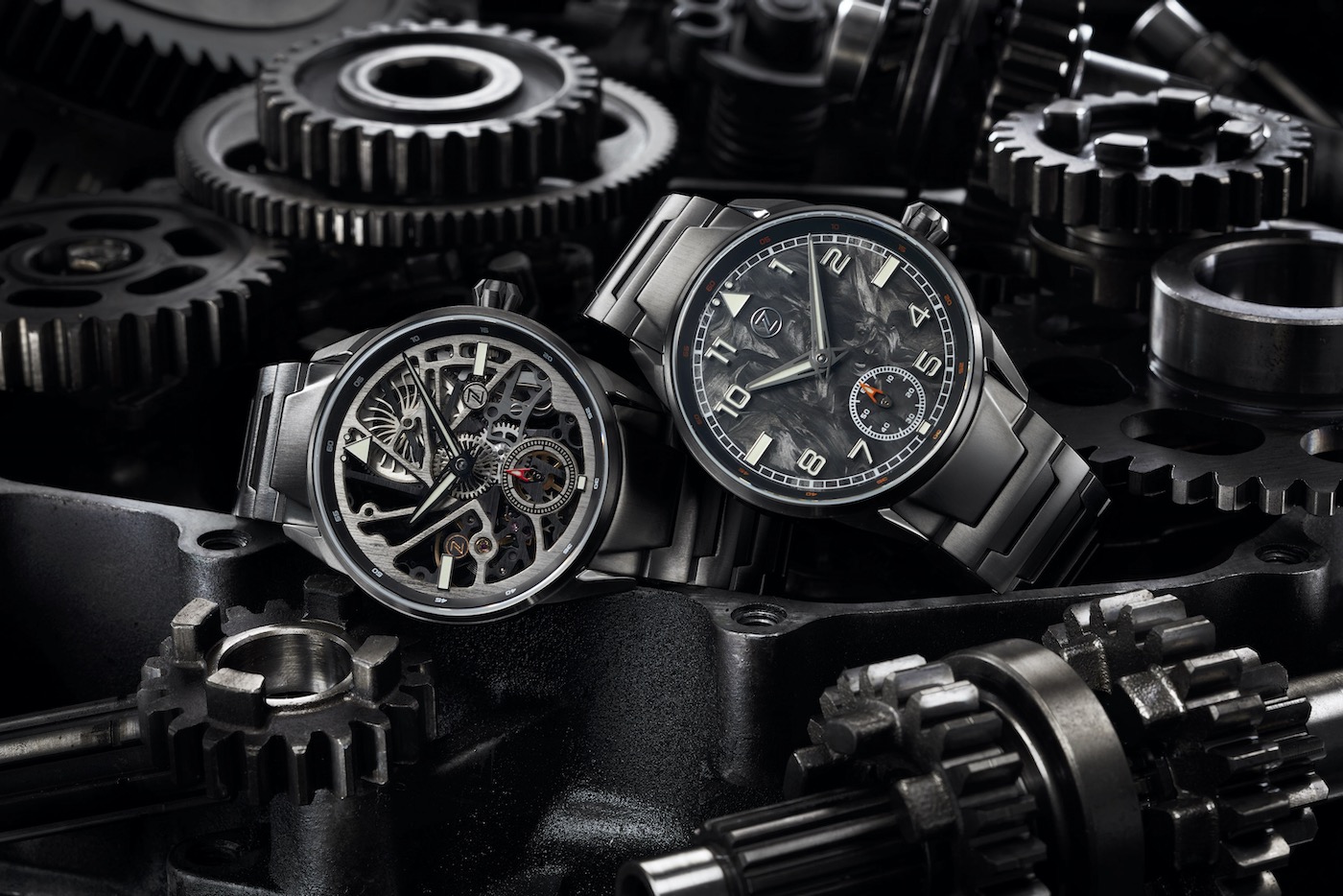 Though Zelos is known for creating watches most at home in the sea, the Singapore-based brand looks to the skies for inspiration with the Zelos Skyraider 2, an original take on the classic pilot’s watch. Given that this is a pilot’s watch is coming from Zelos, it is executed in the brand’s signature style that combines unique materials, colors, and design elements… and of course, plentiful lume. 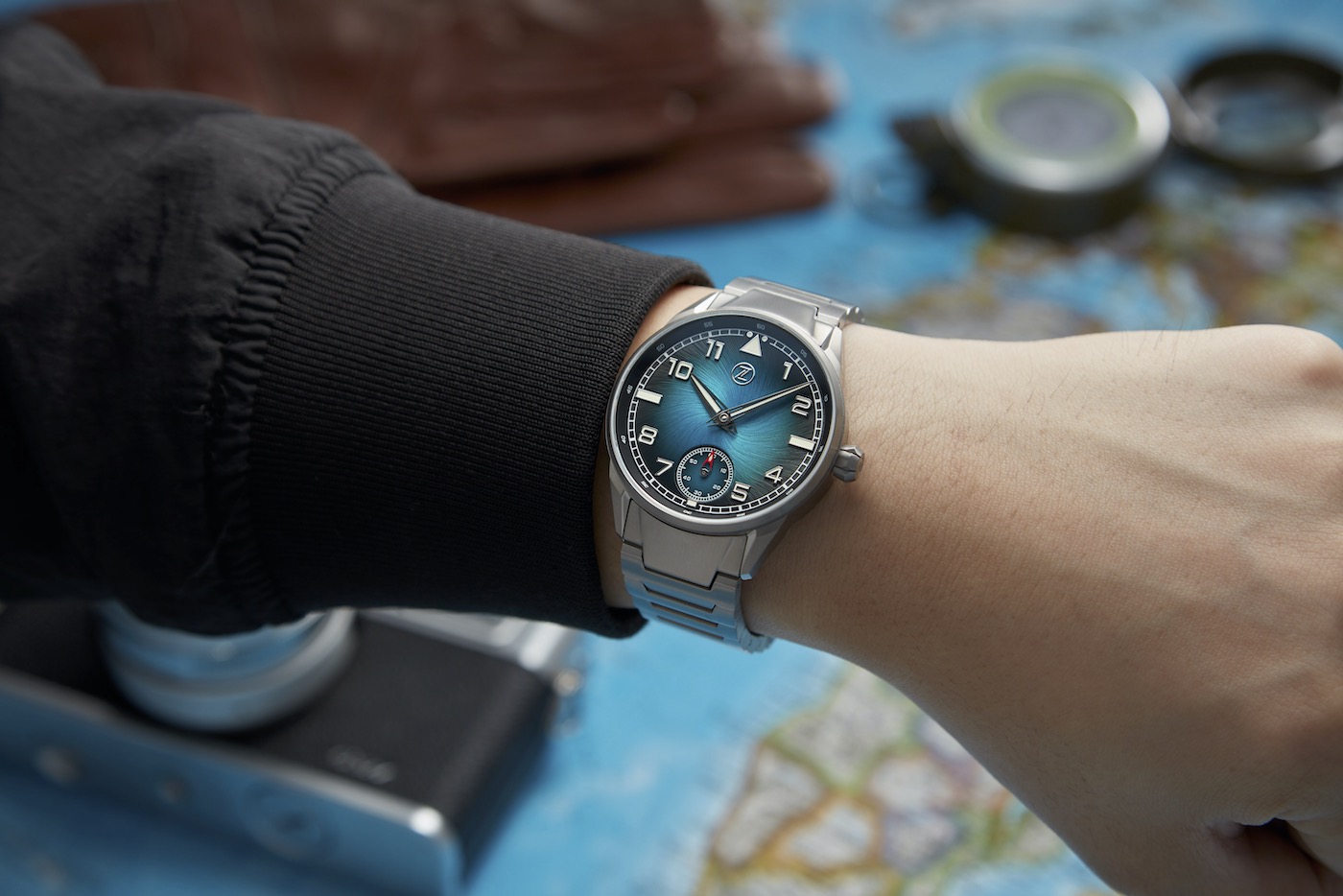 The Skyraider line takes its inspiration from the venerable Douglas A-1 Skyraider — a single-seat, propeller-driven attack aircraft powered by a piston engine. The plane was originally developed in the 1940s and deployed in two major conflicts (the Korean and Vietnam wars), but by the 1980s, the Skyraider was a beloved anachronism, replaced by faster and far more powerful aircraft. It’s fitting, then, that for the Skyraider series, Zelos chose hand-winding ETA 6497/6498-1 movements. Though automatic and quartz movements have largely replaced them, hand-wound movements are appealing precisely because they’re an antiquated technology that requires direct daily interaction, creating a unique bond that is hard to capture any other way. 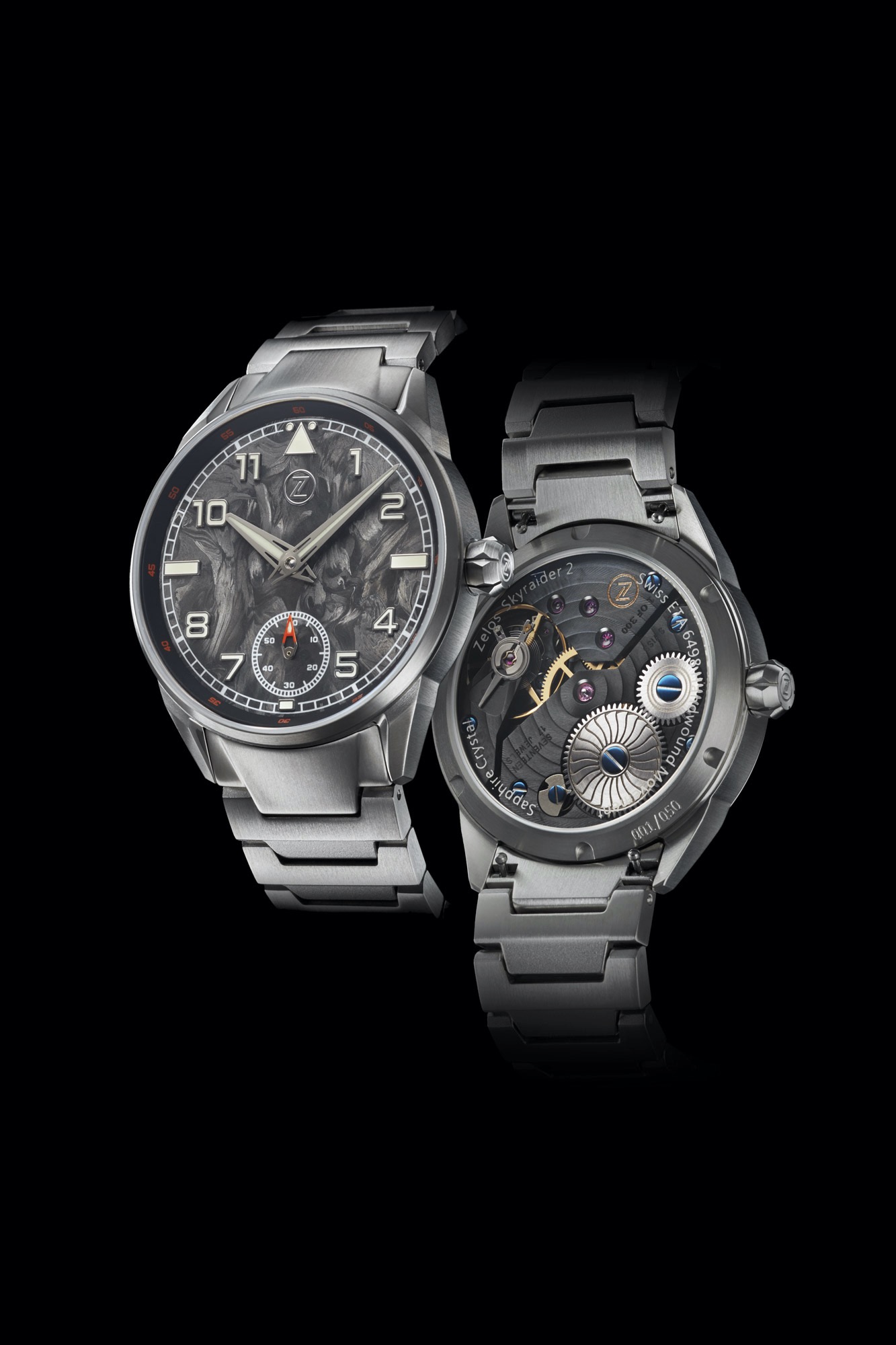 The ETA 6497/6498-1 Élaboré movements (differentiated by the location of the subdial placement) are hand-winding movements based on a Unitas pocket watch movement. Developed in the 1950s, the movements share an era and history with the Skyraider watches. The movements feature 17 jewels, beat at 18.8 kbph, and feature a power reserve of 44 hours. Though the movement does not feature a dedicated power reserve indicator, the skeletonized mainspring barrel allows for a quick and easy gauge of how much power is left in the movement by simply checking how tightly wound the mainspring is. The movements are highly decorated with circular Côtes de Genève engraving on the main plates, an anthracite PVD finish, ratchet wheel with turbine engraving, circular patterning on the crown wheel, and blued screws. Simply put, the movement’s a beauty to behold, especially if you have a penchant for anachronistic machines and a bygone era. 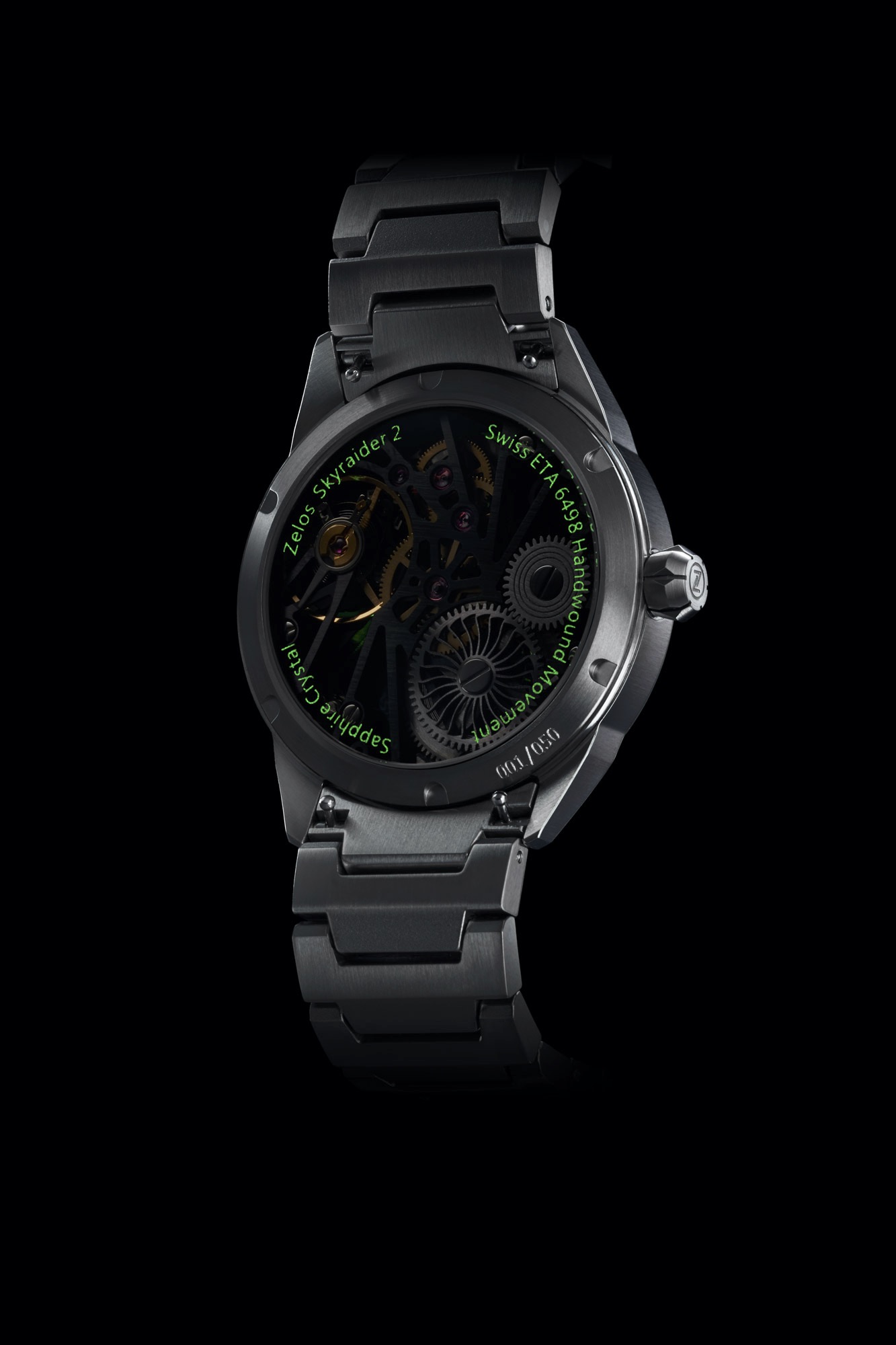 One of the things Zelos does best is contrast classic analog technology with modern materials and design. The Skyraider 2 is housed in a titanium case that measures 42mm in diameter with a 22mm lug-width, 48.5mm lug-to-lug distance, and 10.5mm case height with sapphire crystal front and back. Paired with the titanium case, the Skyraider features an all-new custom titanium bracelet with a stainless-steel quick-adjust clasp and quick-release spring bars. All Skyraider models are water-resistant up to 50m. 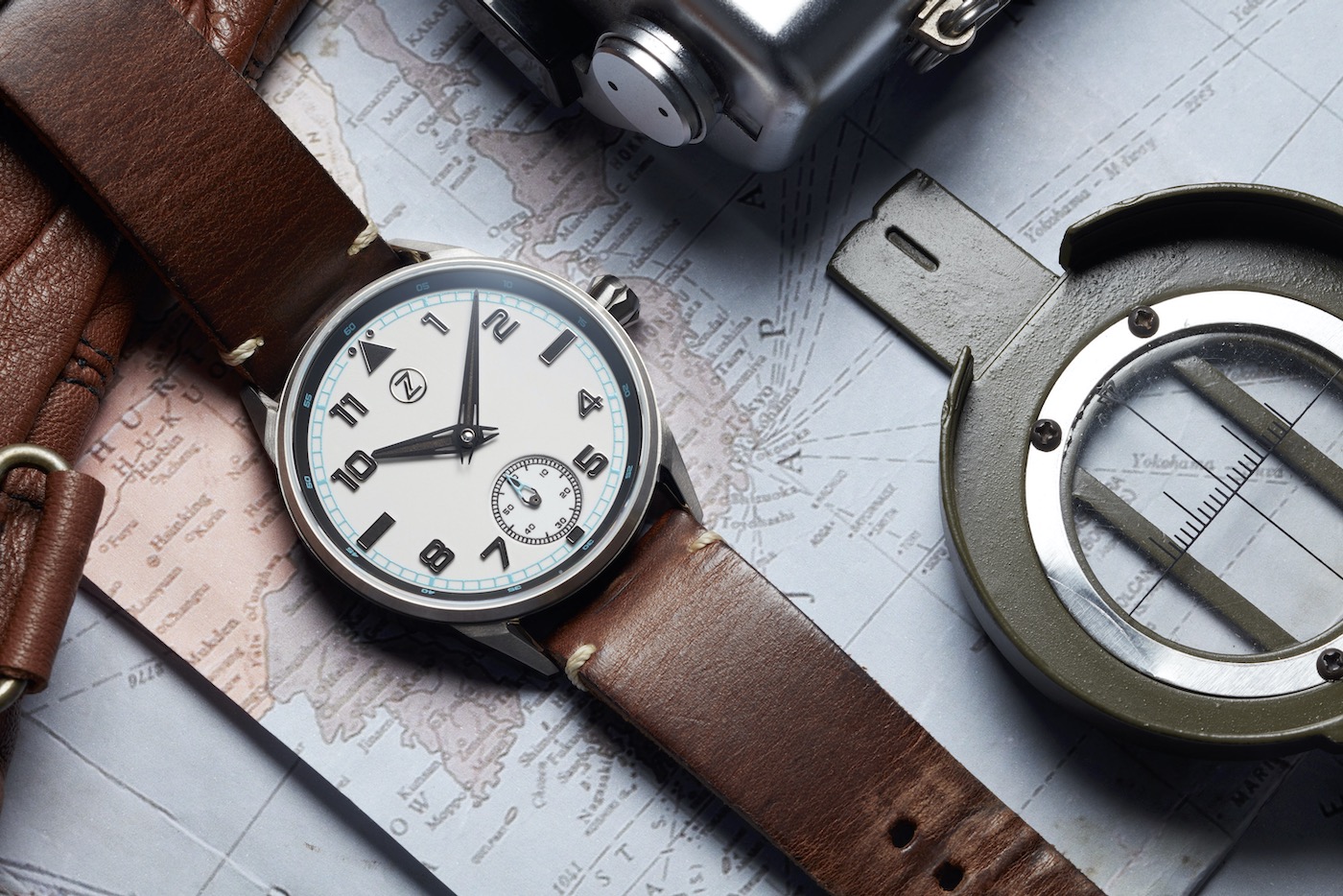 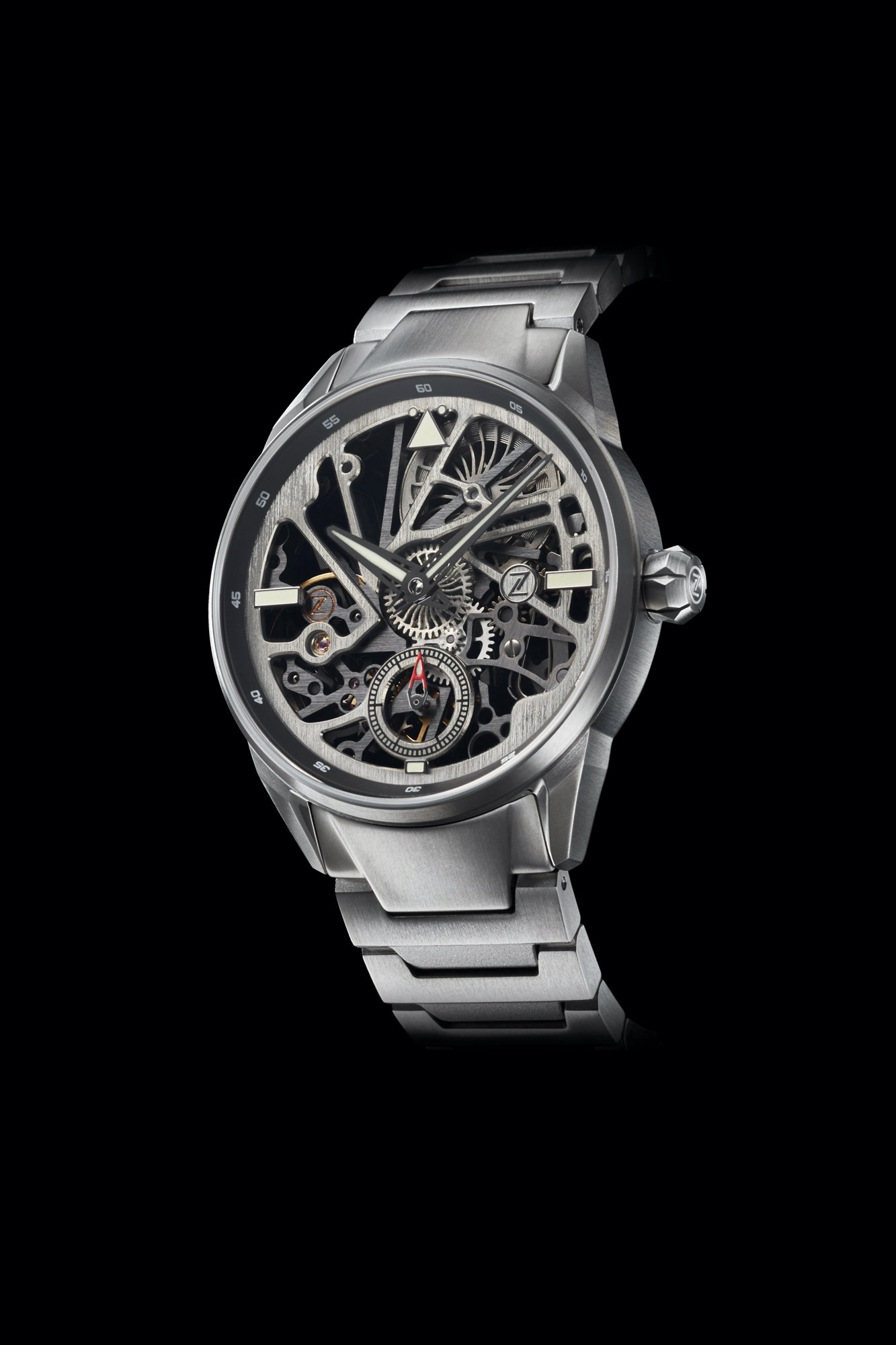 Zelos is offering the Skyraider 2 in five variants. These are not simply different colorways but rather distinct models that use a range of unique dial materials and colors. Starting with the most eye-catching model, the Skeleton features fully skeletonized PVD main plates and a skeletonized mainspring barrel and hour wheel, placing the movement on full display while on the wrist. However, Zelos doesn’t ignore legibility in the Skeleton, with prominent markers at the cardinal positions and broad hands filled with a combination of C3 X1 and BGW9 lume. Anyone who’s handled a Zelos watch knows that the brand doesn’t skimp in the lume department. 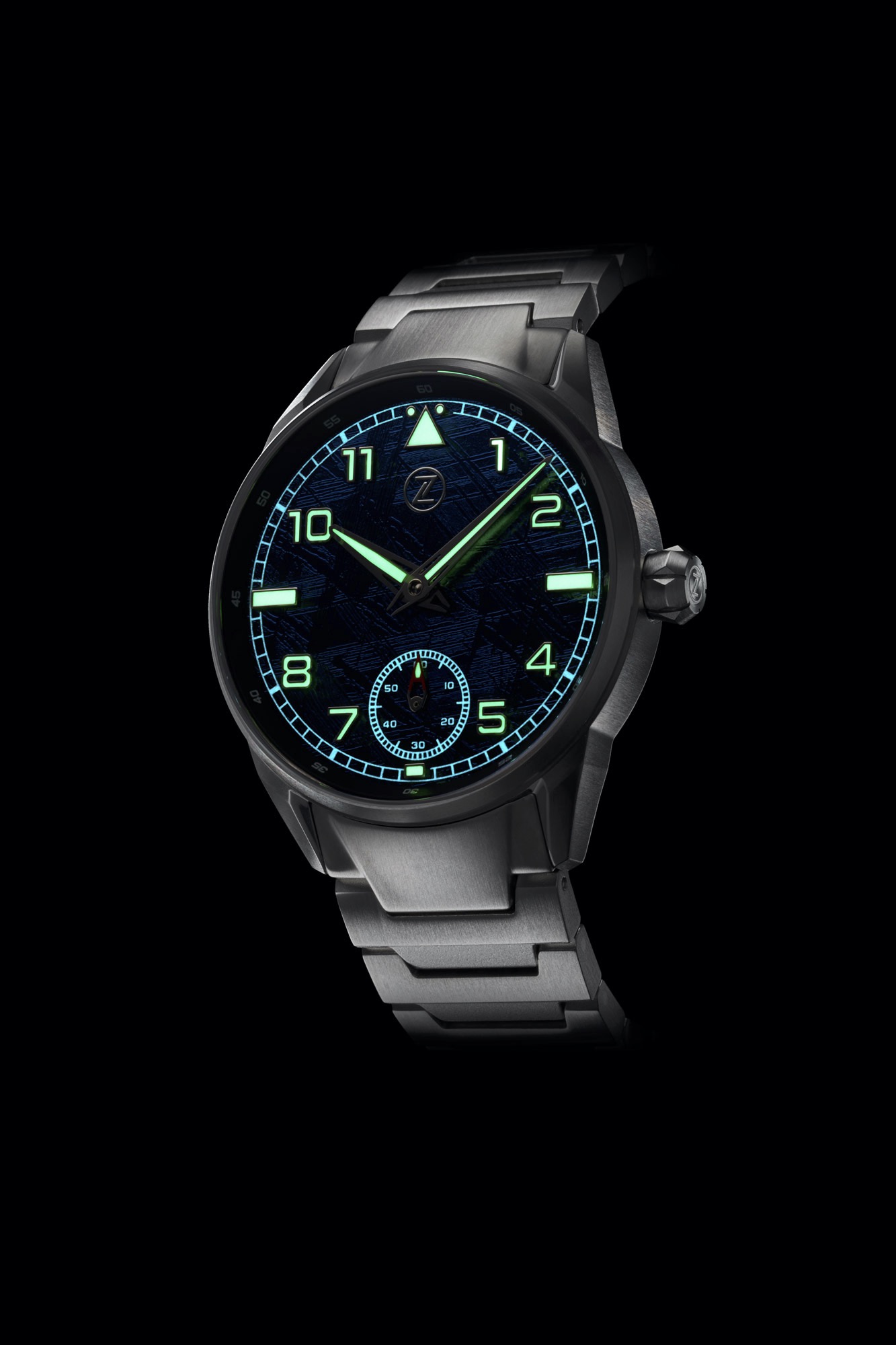 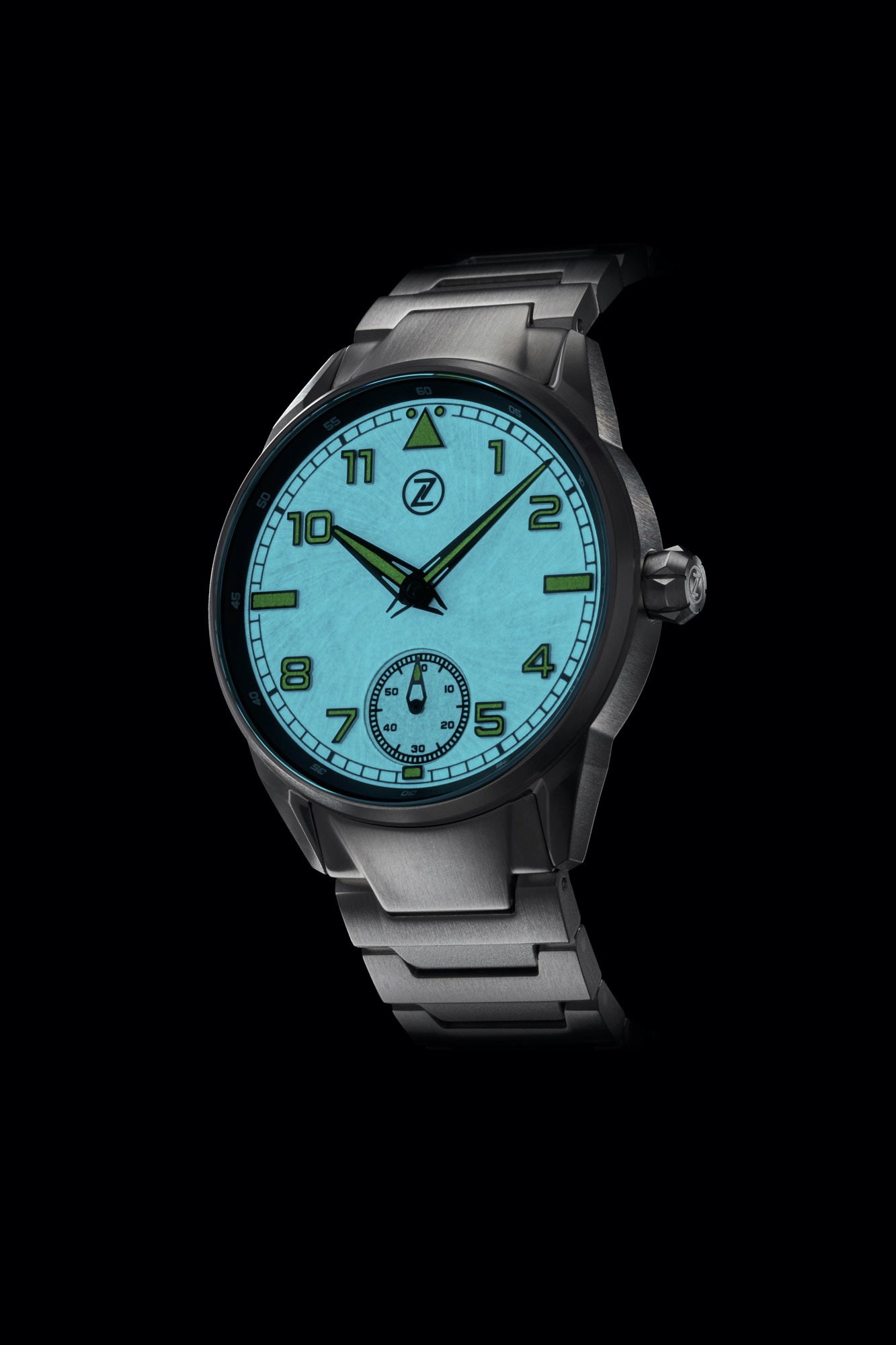 The four other variants all feature Arabic numerals with a prominent running seconds counter at 6 o’clock. However, dial layout is where the similarities end. The Skyraider 2 Ti Carbon features a forged carbon dial, whose organic whorls and swirls constantly shift with changing light. Meanwhile, the Skyraider 2 Ti Blue Meteorite features a piece of the Muonionalusta meteorite that ripped through the earth’s atmosphere, blasting into northern Scandinavia roughly one million years ago. Each dial is cut so its one-of-a-kind Widmanstätten pattern is on full display. To give the watch its own unique Zelos touch, the meteorite is then blued through a PVD plating process. 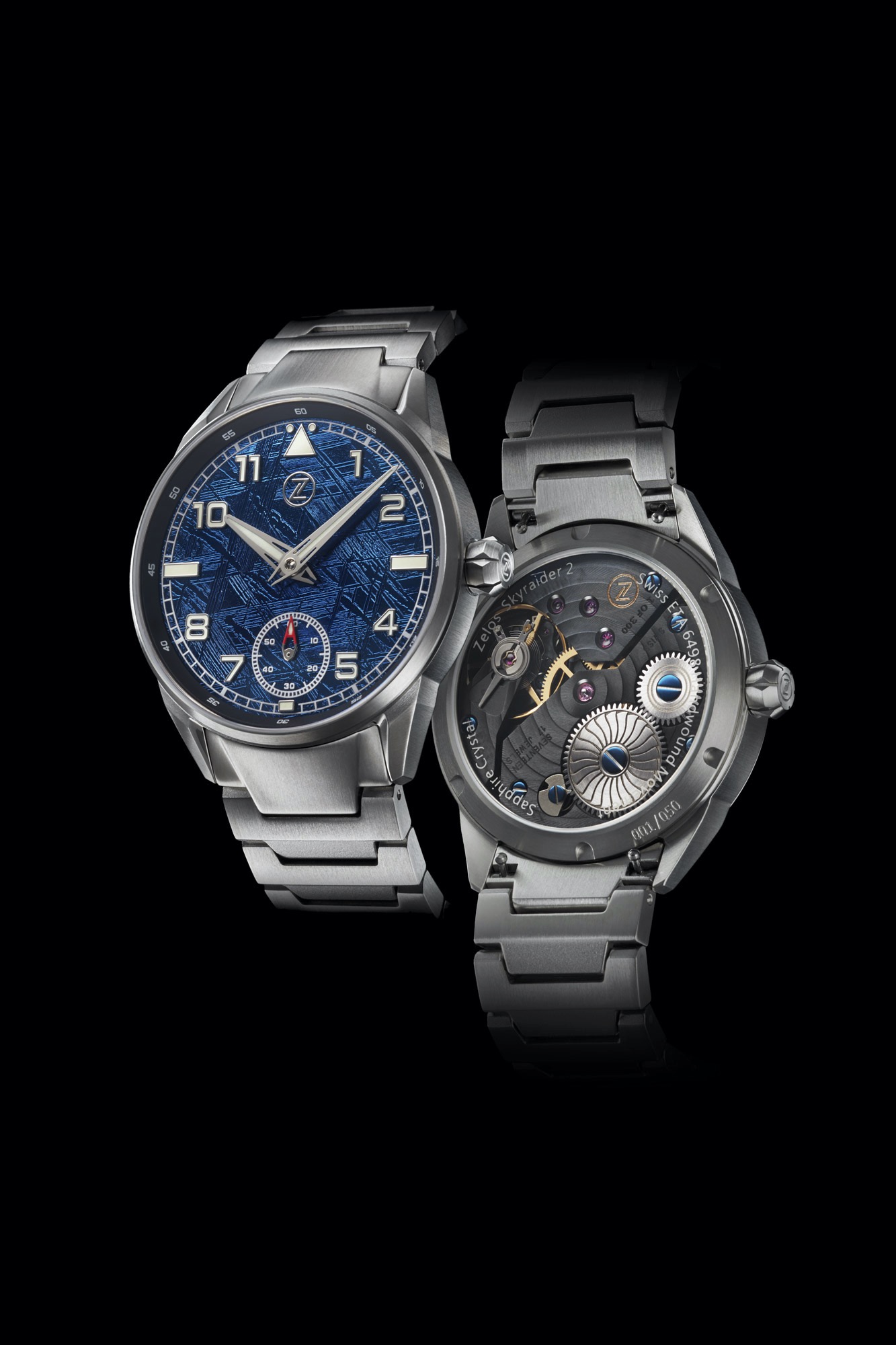 Rounding out the Skyraider 2 collection are the Teal and Frost models. The Teal is stamped with a turbine pattern that transitions from an eye-catching teal at the center to black on the edges. The Frost dial is fully-lumed with black hands and indices that provide a sharp contrast to the white dial. Light blue accents round out the piece and soften the look. 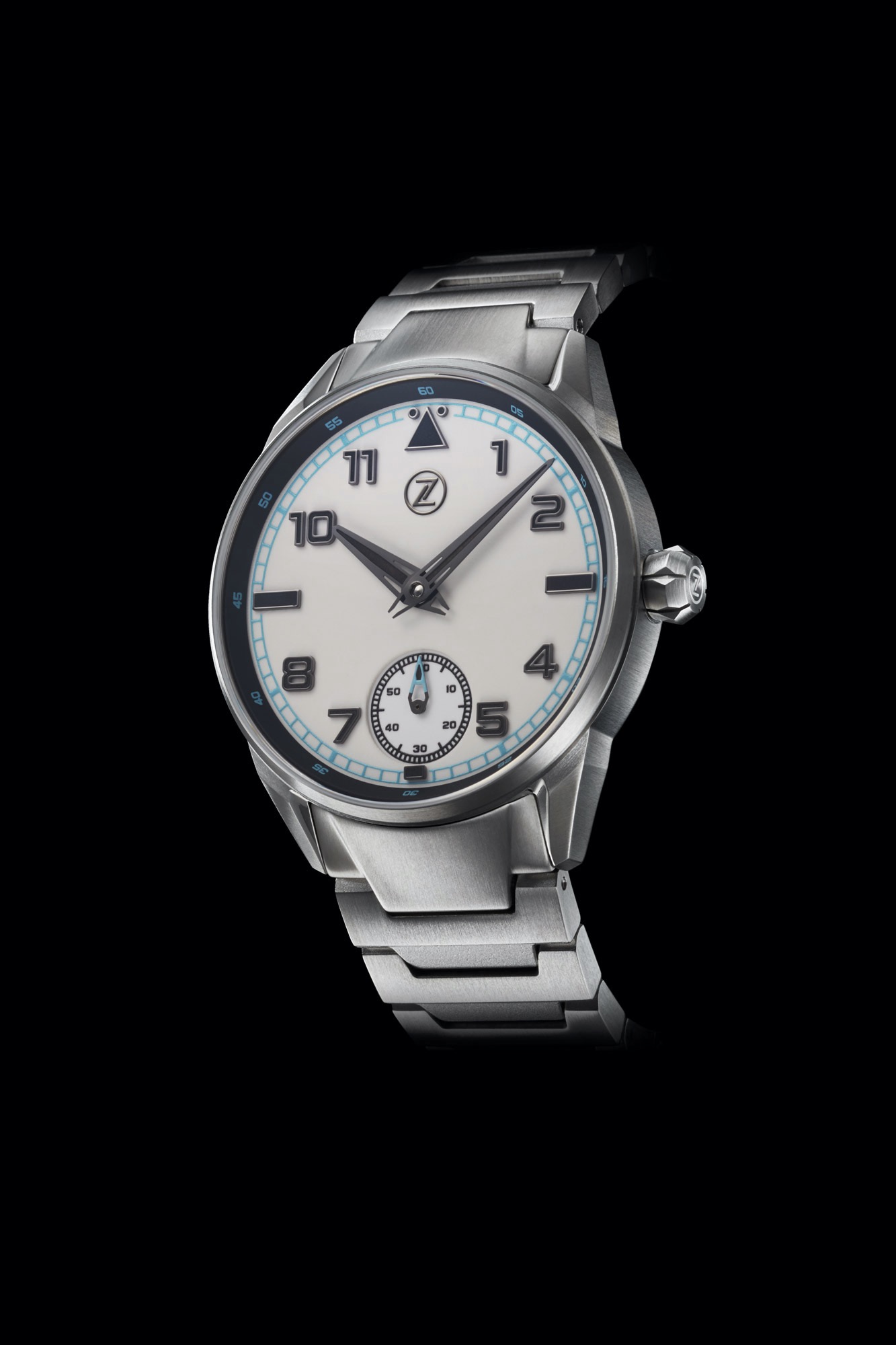 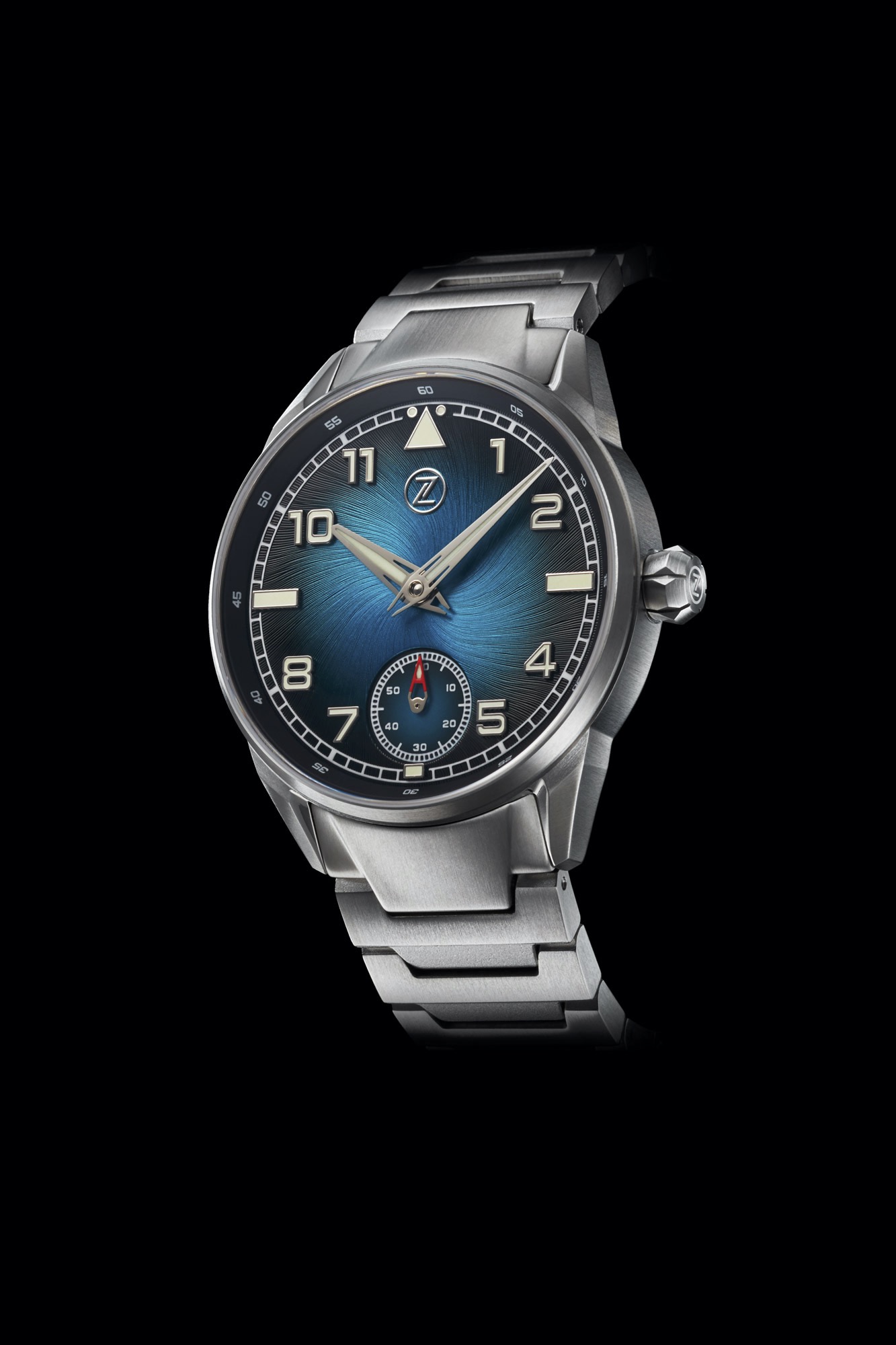 Special launch prices for the Zelos Skyraider 2 are now available, with prices increasing on December 10. Launch pricing starts at $899 for the Teal and Frost models, $999 for the Carbon and Meteorite models, and $1499 for the Skeleton model. Each watch ships in a functional and useful travel watch roll and wooden gift box. For more information on the Zelos Skyraider 2, please be sure to visit the brand’s website.