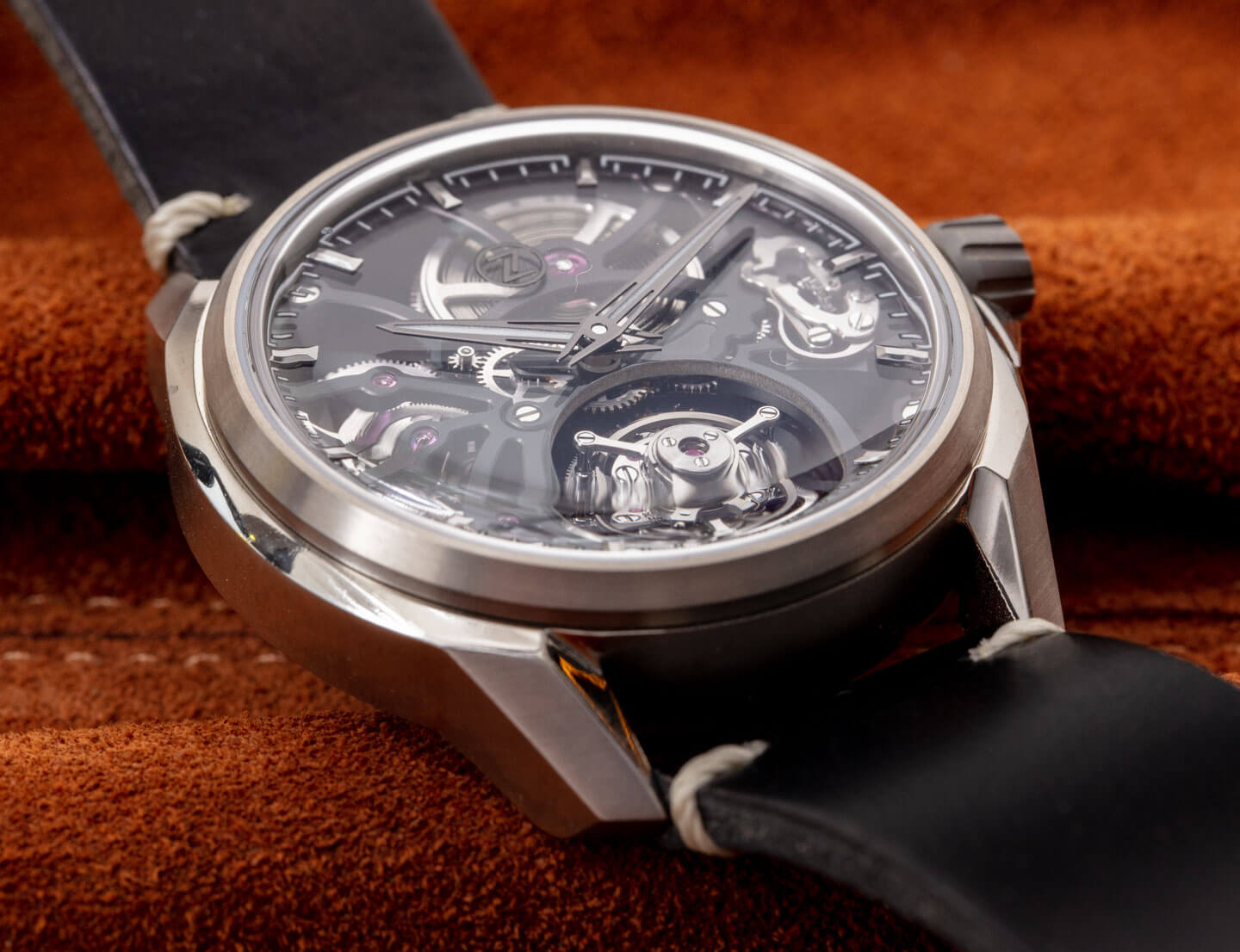 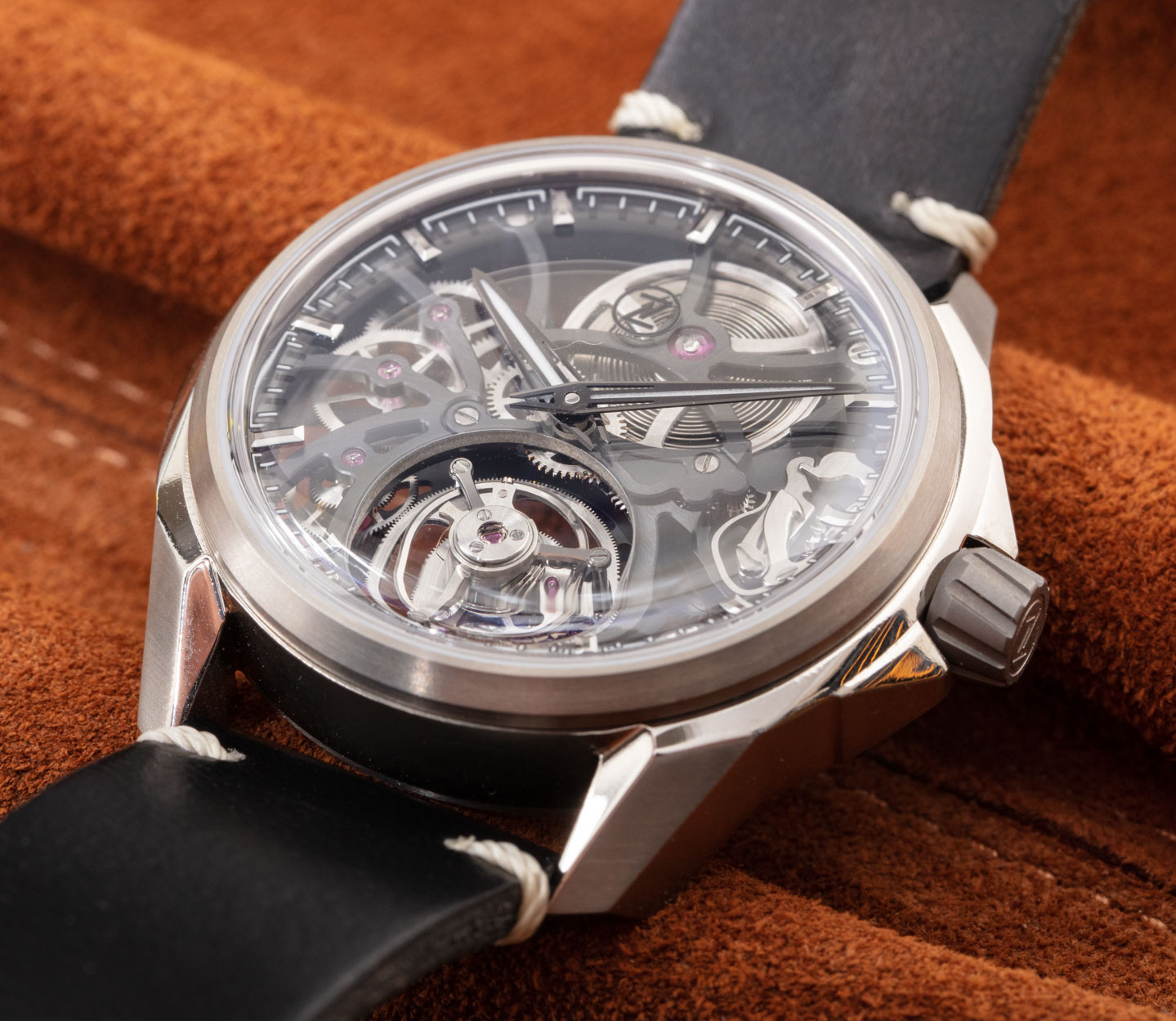 The Zelos Mirage Tourbillon is one of the latest watches from the still new Singapore-based watch brand. The Mirage Tourbillon is a high-end Swiss Made mechanism with a design that speaks to a particular generation of watch lover. It also comes with a really affordable price and shows what can happen when traditional names in Swiss watchmaking combine forces with the powerful entrepreneurial minds that are helping to carry the traditional watch industry into its next evolutionary phase.

Zelos was founded in 2014 and started as one of those brands whom you’d have no idea (at the time) would not only keep going, but also produce numerous successful watches eventually becoming a “real brand.” This is an important point to make because watch consumers are no doubt at times confused what to make of start up watch brands. Should you take them seriously if you like their creative energy, or should you sit by idly and wait a few years for them to prove themselves? It is true that while many start up brands fail, at least a few of them persist on, annually gaining legitimacy and the respect of even conservative watch lovers with loyalty only to the oldest names in horological luxury. Today, I feel that many start up watch makers not only offer viable alternatives to the traditional “big names,” but in more than once instance are themselves being groomed to be one of the big names in the future. 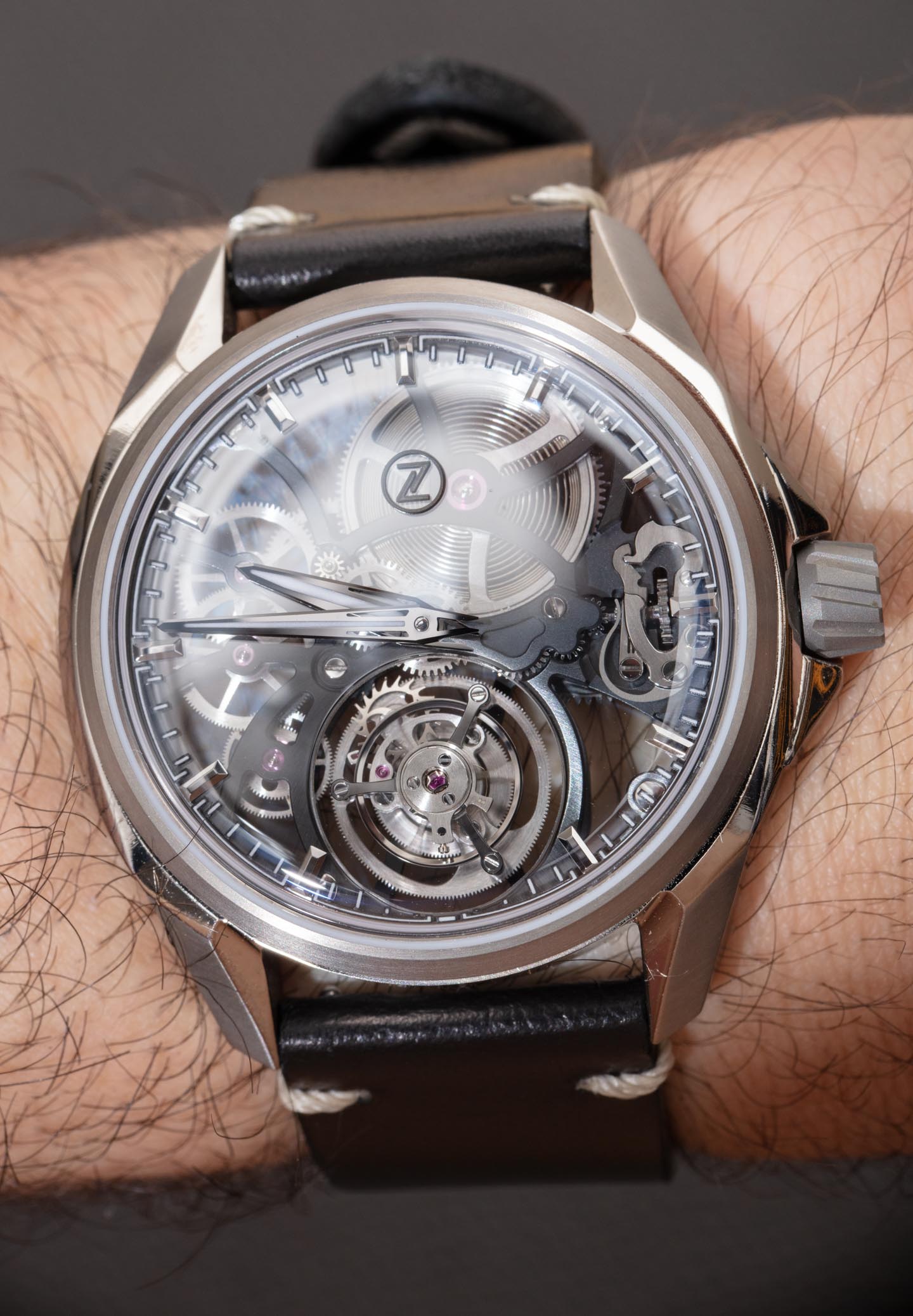 Zelos got itself started, as many modern watch brands do, on Kickstarter. In 2016, when aBlogtoWatch featured the Zelos Hammerhead Kickstarter campaign, it would have been impossible to know the company would not only diversify but also mature with age as it released new models. Zelos has made a name for itself in combining modern design with organic-feeling materials in the traditional categories of watches that do well in the market (such as diving sports watches and GMT travel watches). For this reason, I always encourage watch fans to keep an open mind about new brands because at least a few of them (with a bit of growing and refining) will be able to compete with the “landed aristocracy” of timepiece names, mostly in Switzerland, in due time. It is for this reason that watch lovers circa 2020 are having a love affair with the entrepreneurial spirit and creativity.

In the beginning (or perhaps forever), the Zelos Mirage Tourbillon watches will be part of a limited-edition set. This natural titanium version of the watch (with PVD main plates) will be produced as a limited edition of just two pieces. Among the four different Mirage Tourbillon models, Zelos is producing only 10 pieces. The brand positions them as halo products to help round out its growing range of mostly sport-style watches. 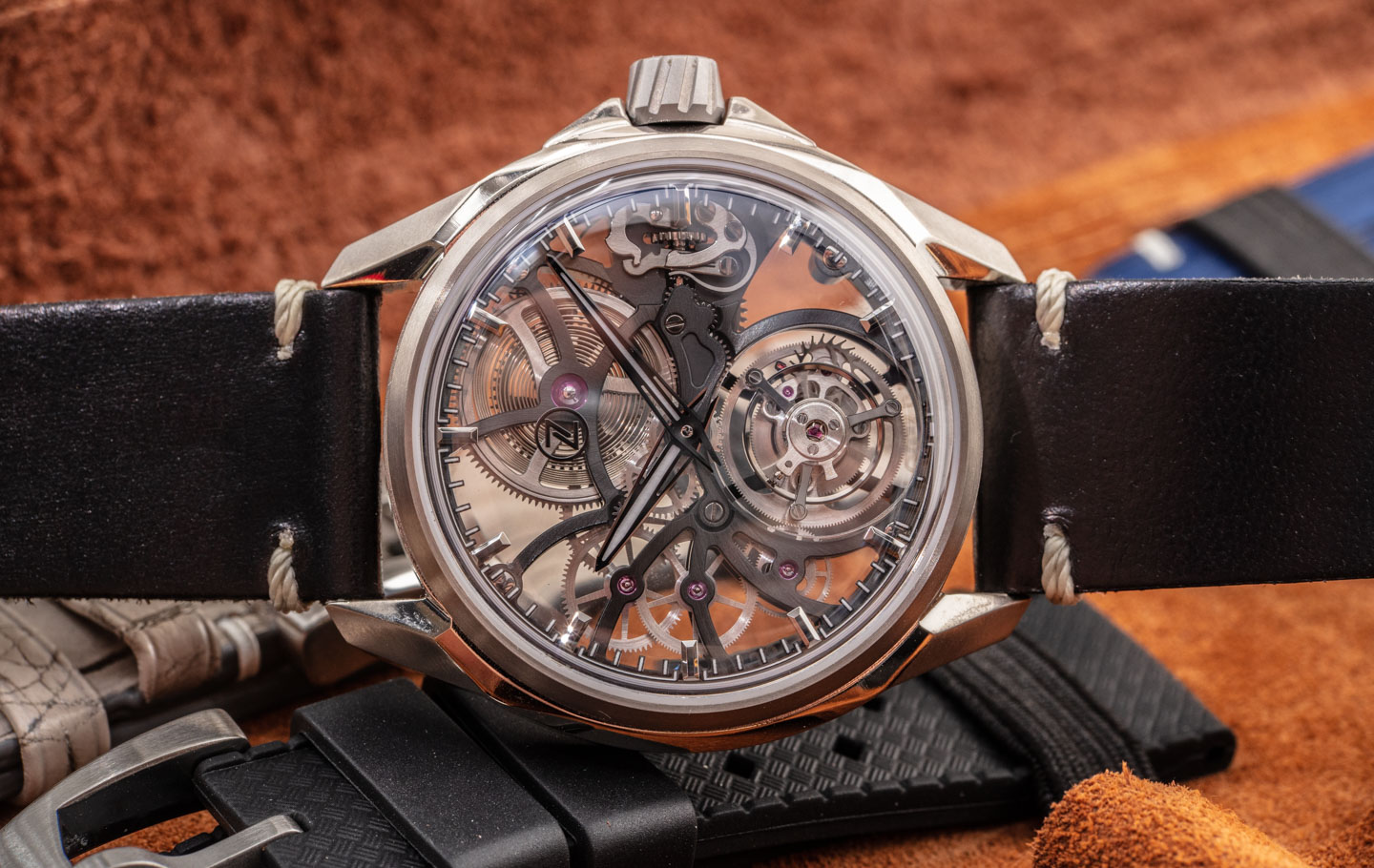 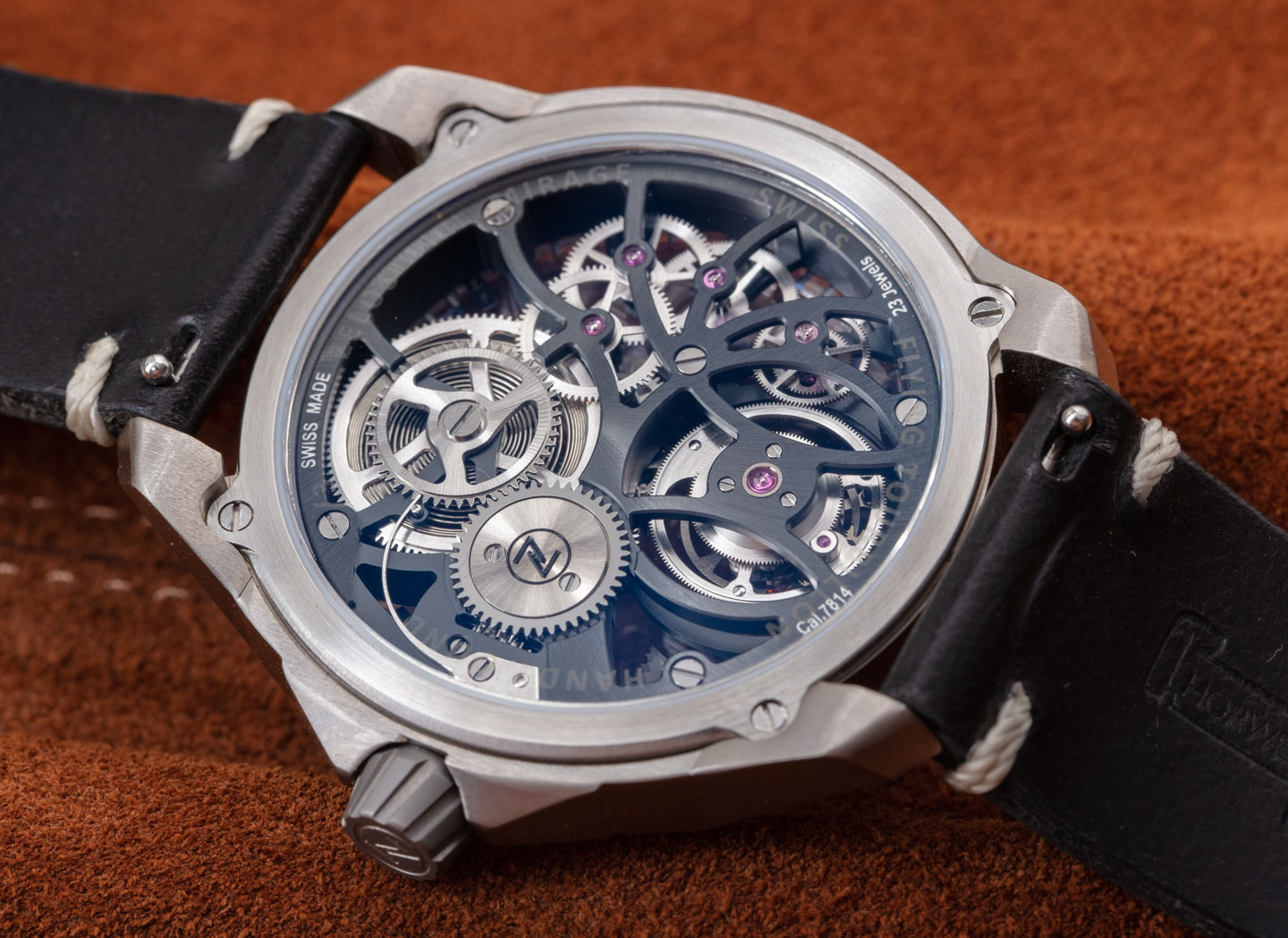 The last few years in tourbillon news have been typified by headlines that focus on new levels of affordability, as well as quality. In 2016, TAG Heuer released its Carrera Heuer 02-T Tourbillon Chronograph for around $20,000, and Horage currently has its own lovely Swiss Made tourbillon for under $8,000. Depending on the version, the Zelos Mirage Tourbillon costs between $11,000 and $12,000 and very certainly feels like a good value. That is especially true when comparing other watches that have the same or similar movement as is in the Mirage Tourbillon.

To outfit the Mirage Tourbillon with movements, Zelos worked with Swiss La Joux-Perret, a company that is actually owned by parent company Citizen Group out of Japan. I believe this was a crucial reason the company supplied tourbillon movements to a non-Swiss company in the first place. I can’t know for sure, but I do know that some incumbent protectionists in the Swiss watch industry want to keep their most esteemed artisanship and technique to be used for home-grown brands. As the global economy for wristwatches continues to be a challenge, I think we will see more and more lessening of this traditional protectionist approach to who Switzerland-based suppliers will sell to. 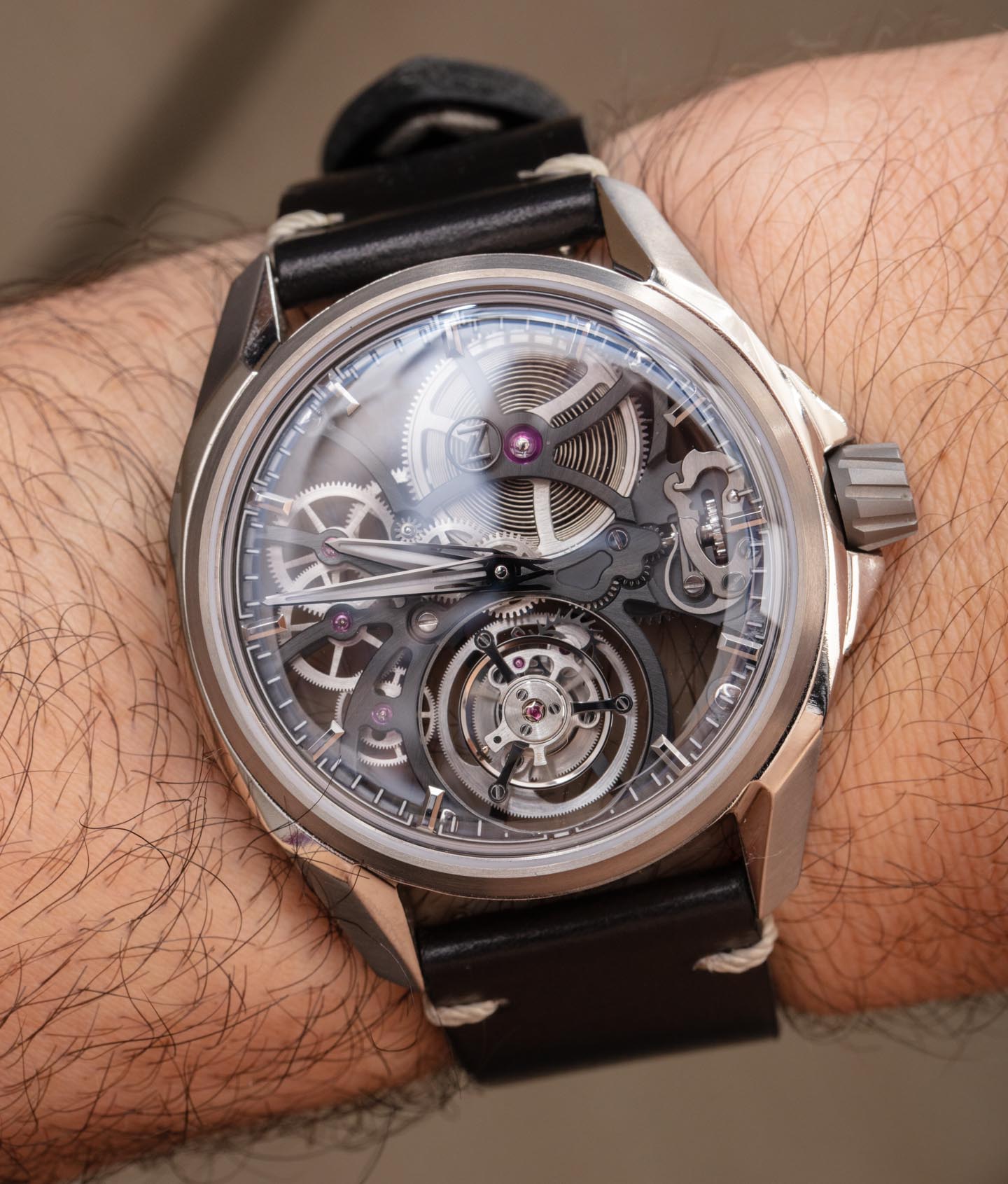 The last time I reviewed a watch with this same movement architecture was in the Angelus U51 diver Tourbillon (on aBlogtoWatch here). That watch was a bit fancier and the movement was done differently, but it also cost around $20,000 USD more. That is a big difference. Now, watch fans can enjoy the beauty and grace of a La Joux-Perret flying tourbillon but in a more humble and elegant package that is priced to move for today’s zealous fans of high-end horology. The movement itself is the La Joux-Perret caliber LJP 7814 and is manually wound with 60 hours of power reserve operating at 4Hz (28,800 bph). Unlike entirely machined movements, the LJP tourbillon does come with sufficient volumes of hand-polishing.

Aesthetically, you can view the movement through the dial, and on this version, the main plate has been coated in a dark gray color using PVD. It makes for a really attractive look under the transparent dial, which is where the hour markers are placed. The watch itself has a slick modern design but is sized to wear like a demure dress watch. In a sense, it is a casual dress watch when compared to Zelos’ big collection of sports watches. 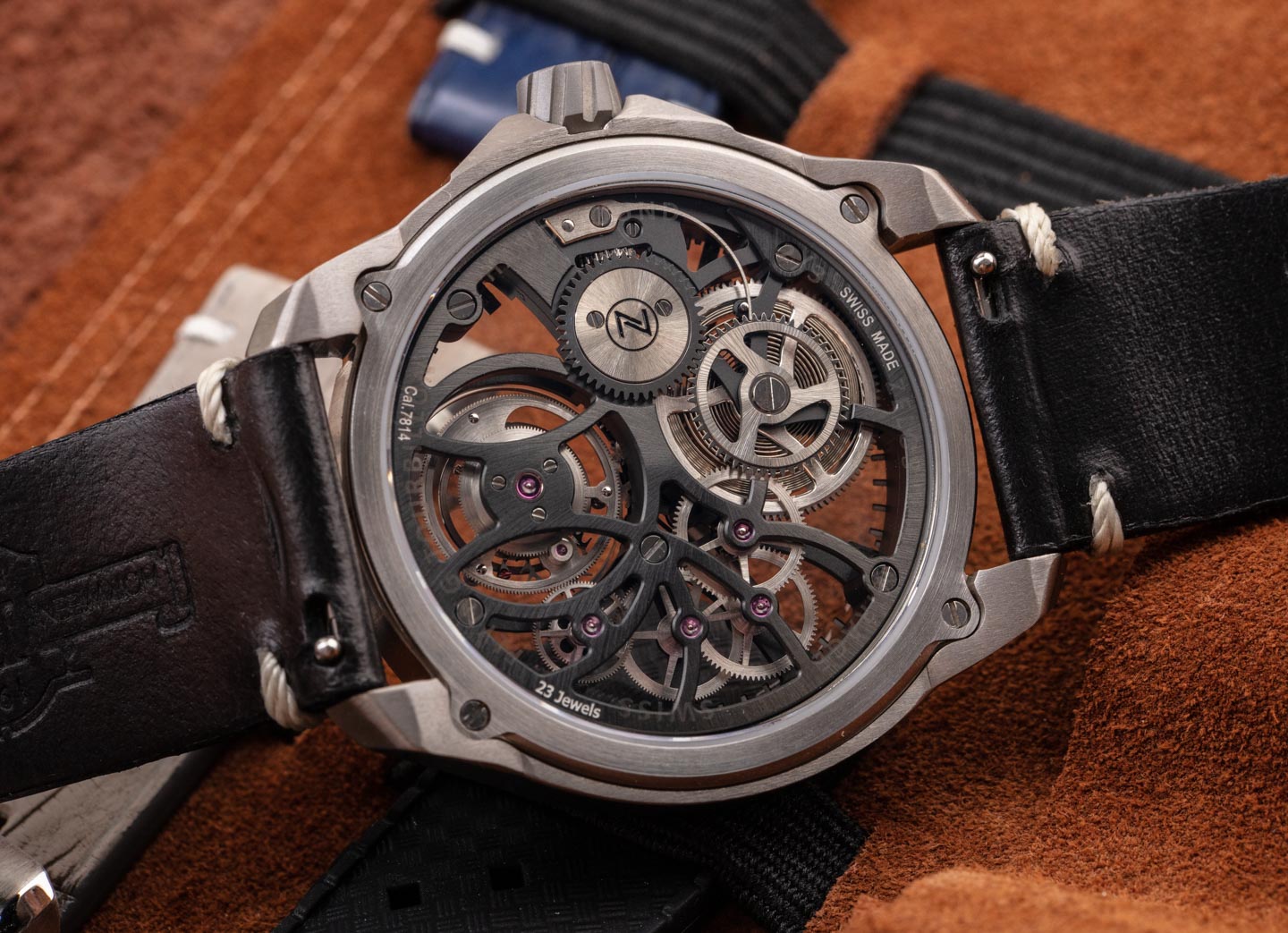 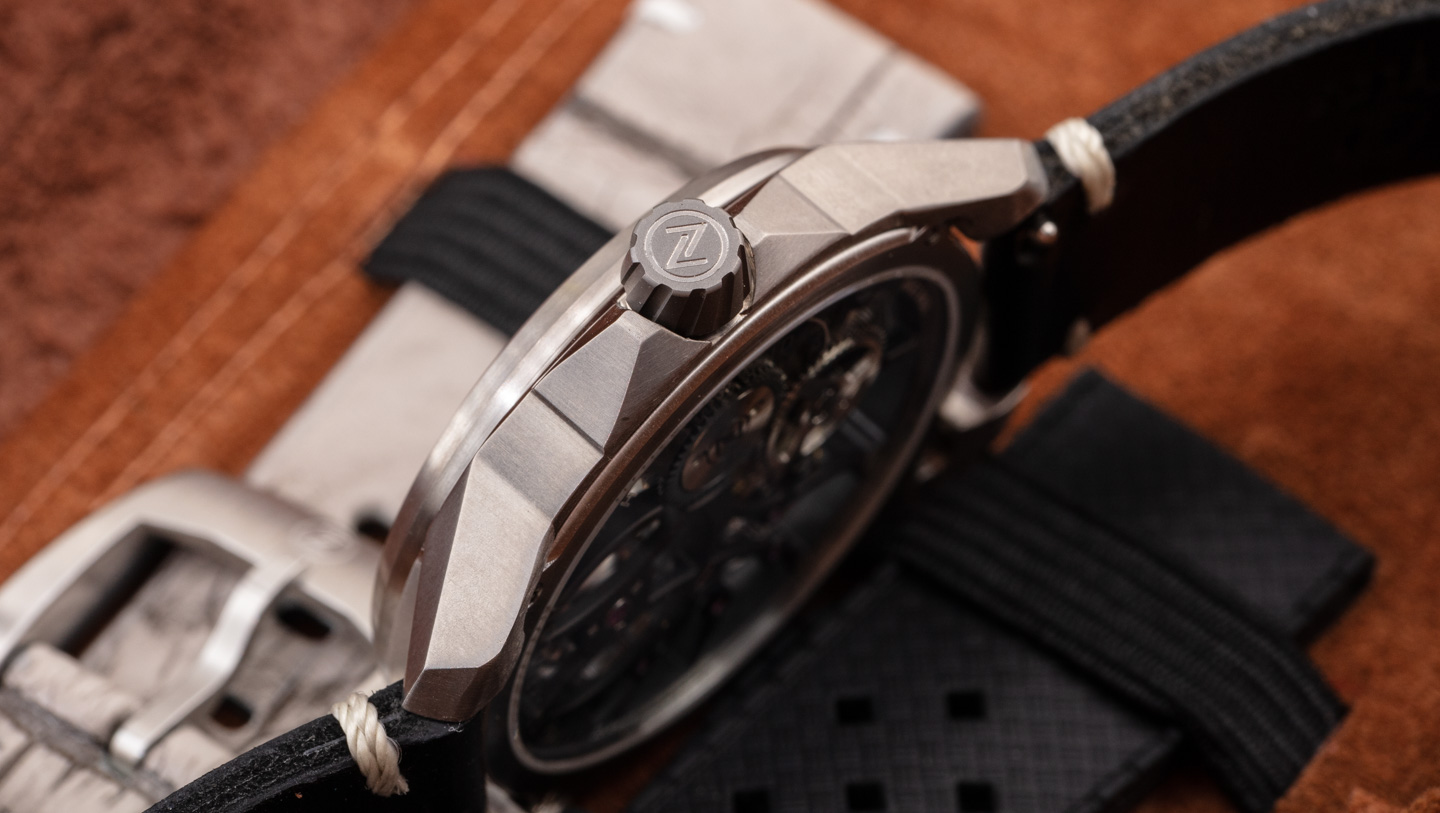 Dimension-wise, the Mirage Tourbillon case is 41mm-wide with a 45mm lug-t0-lug distance. It also wears small due to the narrowness of the dial compared with the broadness of the case. The case is also just 9.5mm-thick  (without the top “box-style” sapphire crystal) and has a water resistance rating of 50 meters. Zelos includes a very elaborate presentation set that includes an oversized wood box and a leather carrying case that allows you to carry a set of watches and also include a few additional strap options to mix up the look. 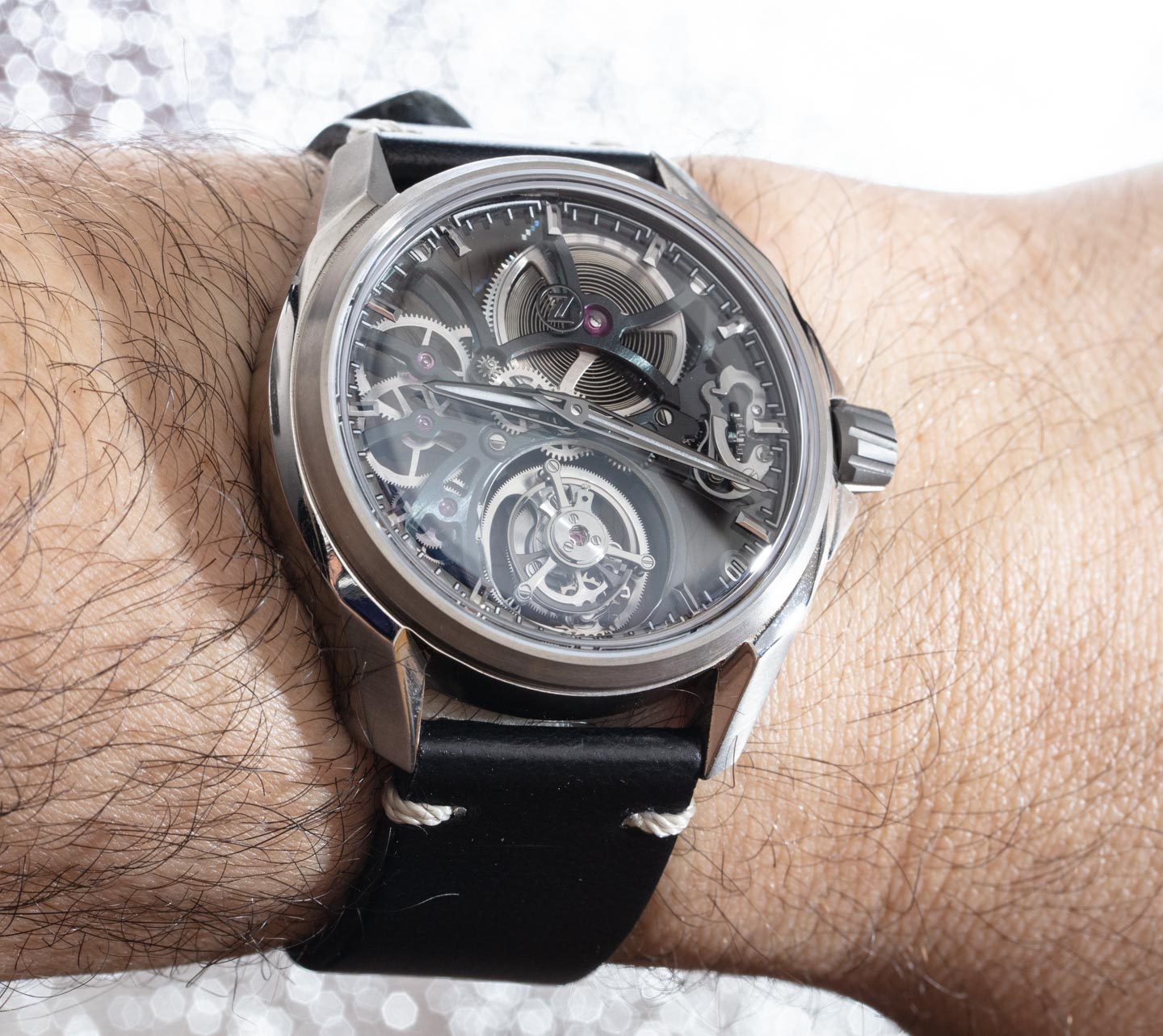 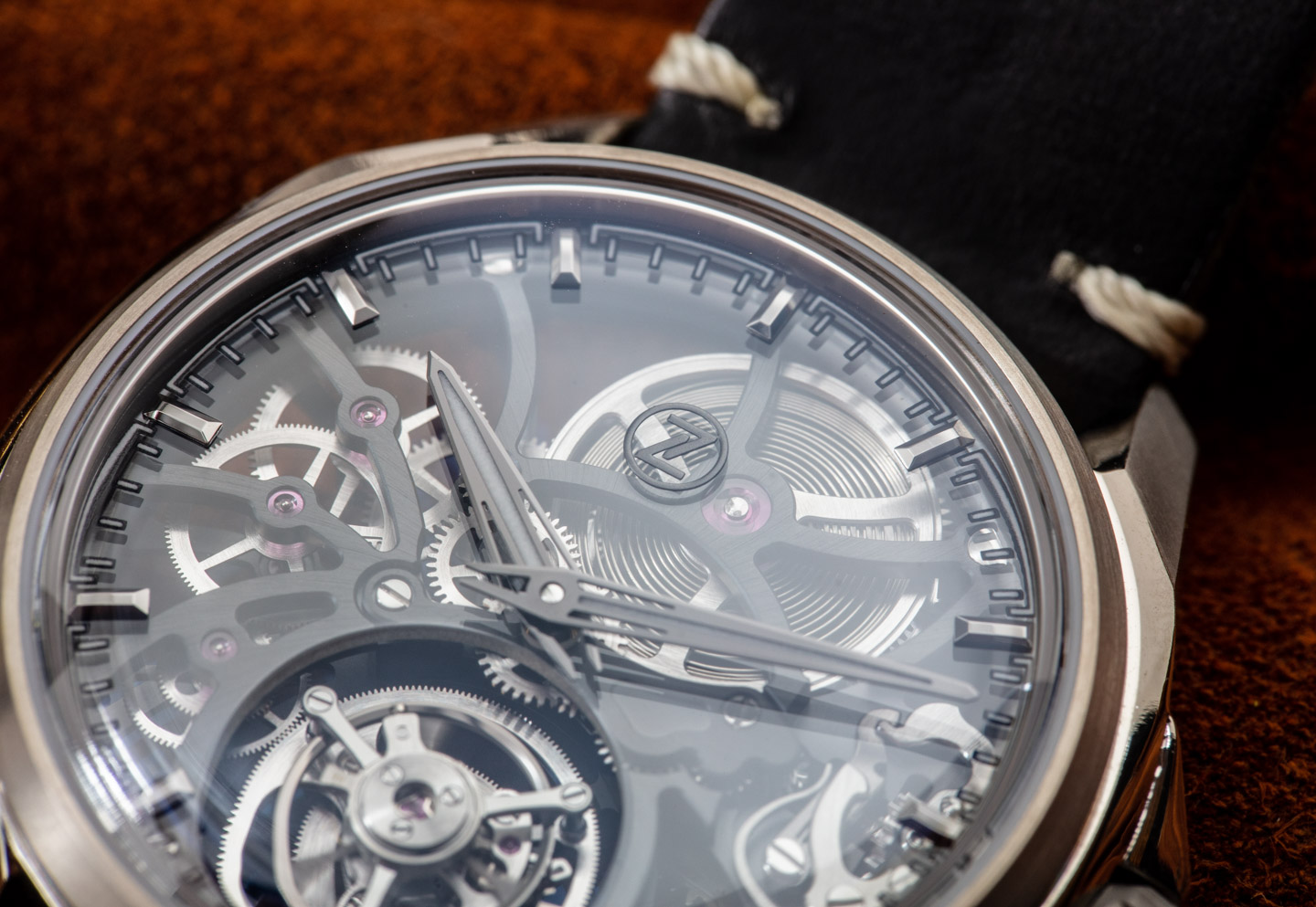 Zelos knows what watch lovers today want because Zelos founder Elshan Tang is a watch lover himself. That explains how the Mirage Tourbillon feels both trendy and approachable but also novel and fresh at the same time. Zelos is not becoming a “tourbillon brand,” but it was wise to show what it could do in a halo product using a desirable Swiss Made tourbillon and its particular flavor or flair and horological decor. I’m personally very proud of the fact that aBlogtoWatch has been instrumental in helping brands like Zelos get the exposure they need in order to reach passionate consumers to help the brand grow up and produce beautiful stuff like this. Price for the Zelos Mirage Tourbillon as pictures is $10,900 USD (with prices at $11,900 USD for the more elaborate case styles). Learn more or order at the Zelos website here.