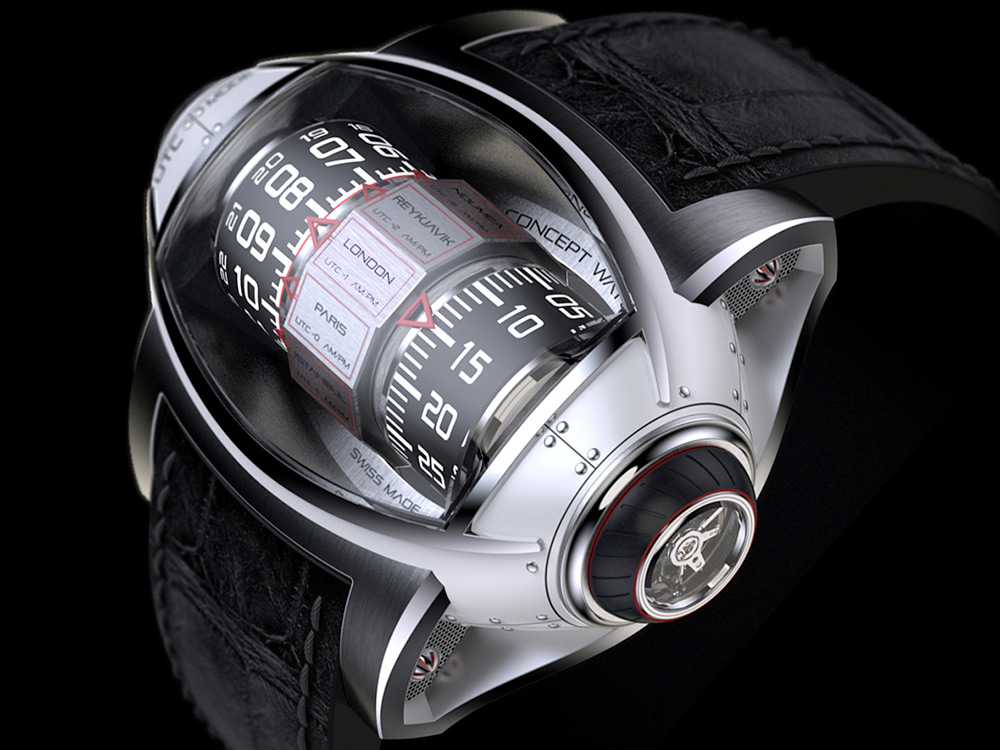 Even though it’s the crazy-futuristic, high-concept design language that ultimately informs the future of everyday design, no one actually looks at the sleek lines and unattainable technology packed into a concept car wondering “when will this be the next Toyota Corolla?” That’s because there’s an almost expected, and tangible disconnect between practicality and pure design-porn. To a similar end, we have the Germain Baillot Concept Watch – a radical neo-futurist concept watch straight outta the jet age, equipped with two complications: a 24-hour GMT world timer and a vertical tourbillon. While still purely hypothetical, as a concept, we think it is worthy of attention and discussion.

Design is where science and art break even. —Robin Mathew As a Digital Designer by trade, Baillot’s creation may exist purely in the Autodesk Alias and Keyshot design programs at the moment, but its conceptual origins are steeped in practicality. Inspired by the silhouette of a spacecraft or fighter jet, the watch is designed around a massive domed sapphire canopy, beneath which a trio of cylindrical rollers display the time in readily legible form. A quick twist of the crown at 3:00 sets the hour and minute rollers in the same manner as a traditional 3-handed automatic movement, but it’s here, inside the “fuselage” crown, where the vertical tourbillon is stowed – a particularly neat touch that cleanly integrates the complication without disrupting the rest of the watch’s sleek, nü-retro aesthetic. On the nose of the “ship,” the 9:00 crown rotates the center world time roller, which serves as a UTC reference to the corresponding city, in the same manner of many classic 24hr or GMT watches. It’s worth noting that calling this a “world timer” wouldn’t be entirely accurate, as cycling through the UTC roller doesn’t change the local time. But then again, in terms of practical usability for frequent travelers, the watch’s massive silhouette is probably the more immediately obvious drawback. Despite the relatively simple time-telling complication in the realm of high-end watchmaking, it’s the rest of the case where Baillot starts to deploy much more creative liberty. Details like the riveted, cylindrical case sides and the contrasting black jet exhaust cones at both 3:00 and 9:00 are meant to evoke the danger and mystique prominent in vintage aeronautic and futurist aerospace design. As mentioned, the thick, pod-shaped silhouette of the watch itself doesn’t lend itself well to daily wear, even with the best efforts of a pair of sharply downward-curved lugs and a matching integrated rubber strap. But then again, practicality was never the point here. Like HYT’s liquid time display, MB&F’s robot clock, or the orbiting satellites on an Urwerk, the high-concept design itself is the means to an end – an experiment in haute horology, where the goal is the pursuit of new and intriguing means of doing what every other 3-handed watch does: tell the time. But will Baillot ever bring this concept to life in this exact capacity? We’ll just have to wait and see. Germain Baillot on Behance.net