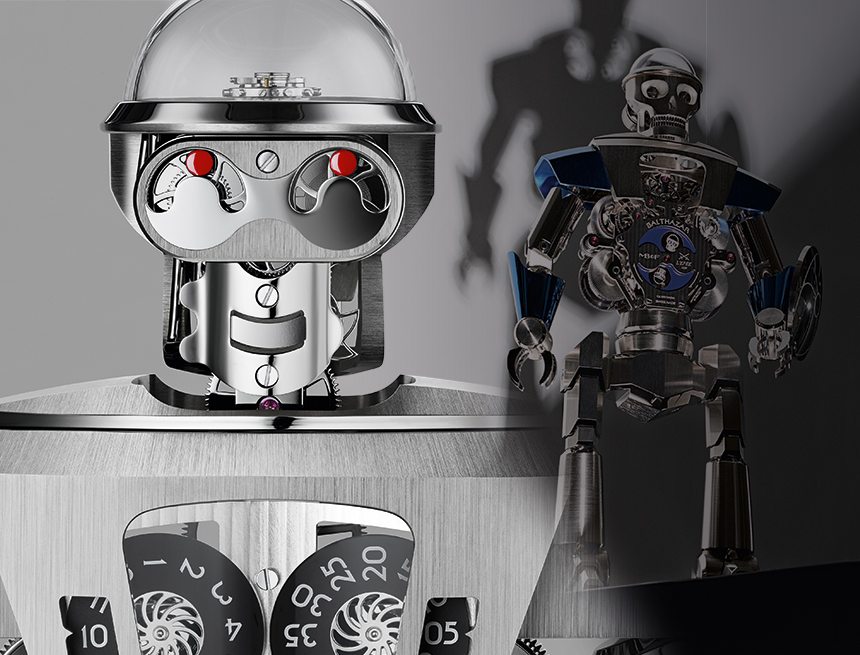 Let’s get one thing straight – MB&F is light years away from starting a robotics lab, which is probably a good thing since MIT seems to have that realm already pretty well covered. Besides, could you imagine this nightmare bringing you the newspaper in the morning? Thankfully, the Swiss watchmaker isn’t in the business of bringing us another step closer to a Skynet takeover, and is instead expanding its range of highly posable desk and tabletop clocks with the MB&F Balthazar – a steely, horological cyborg with split personalities whose inner workings reveal the same clever time-telling means that have routinely made the brand a fun one to watch. 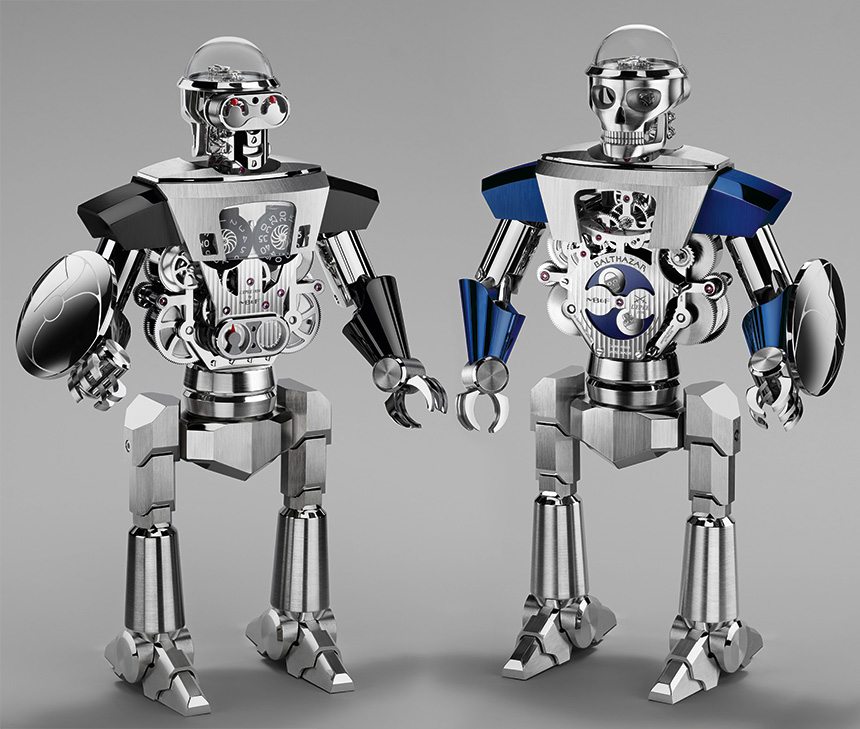 Balthazar is the latest evolution of MB&F’s prior robotic offerings, each of which were seemingly inspired by the last 50 years of robots in cinema; first with a Robot B-9 lookalike from 1965’s Lost in Space, then with this amiable dead-ringer for Short Circuit’s Johnny 5 from 1985. Unlike those two options, though, the MB&F Balthazar comes with a dark side – flipping from a friendly living room sentinel to a menacing T-800 Endoskeleton, à la 1984’s Terminator by merely rotating his torso 180 degrees. 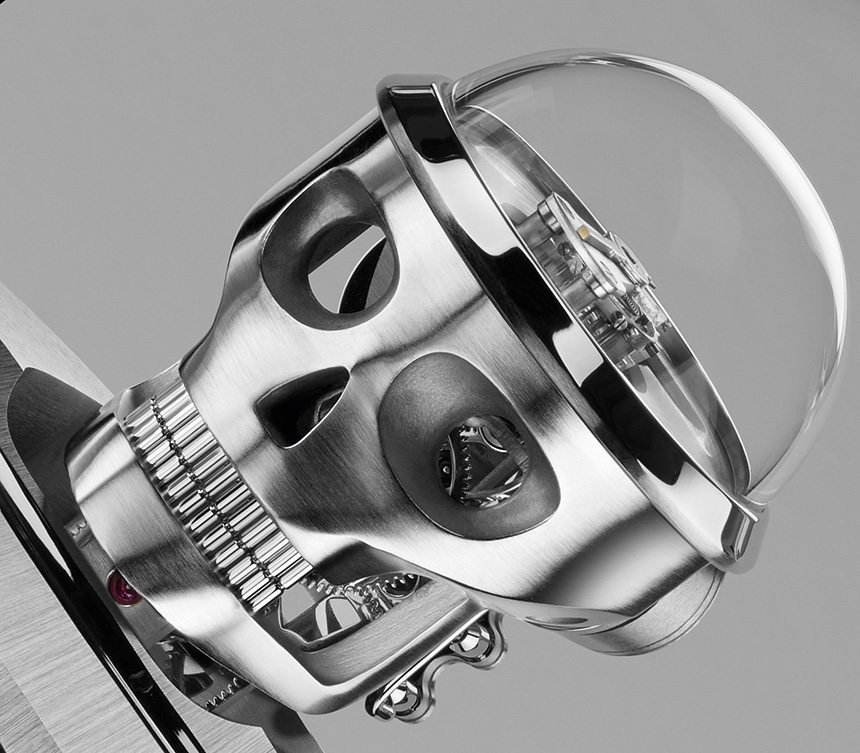 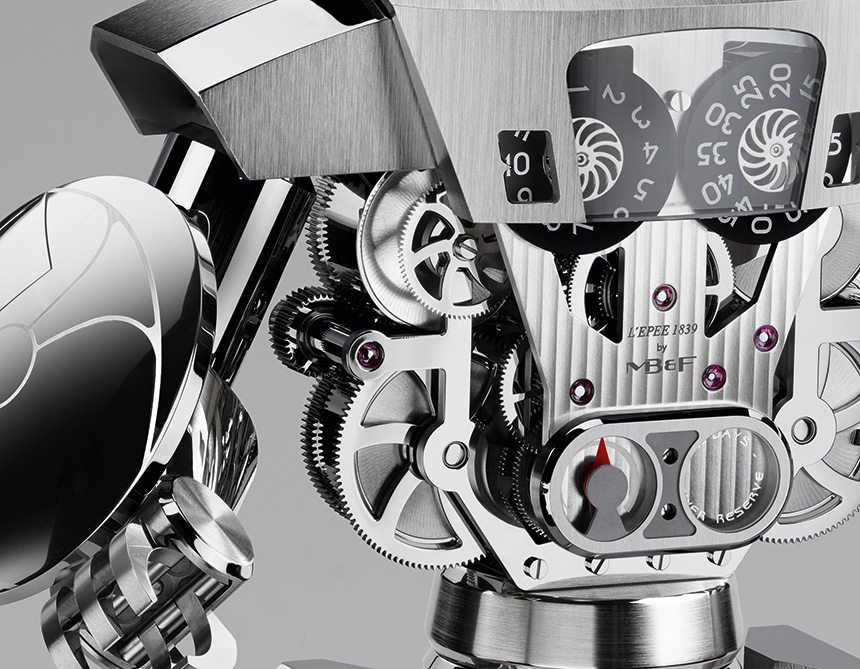 To pull off the MB&F Balthazar’s ambitious design and sophisticated construction from over 600 micro-engineered components, MB&F again enlisted the assistance of clockmaker L’Epée; a highly specialized manufacture with nearly two centuries of experience making music boxes, clocks, and watch components near the Swiss-France border. The movement inside the MB&F Balthazar is in-house designed and manufactured by L’Epée. Beyond the challenge of the clock’s construction itself is the polishing, blasting, and satin finishing of each component, whose larger surface area yields a much greater challenge for watchmakers trained in traditional Geneva finishing.

At the core of his feature set is a jumping hour clock with retrograde seconds and a crazy 35-day power reserve on a single wind – all of which are exhibited through subtle cues throughout his massive 16-inch (40cm) tall, 18-pound (8kg) frame. 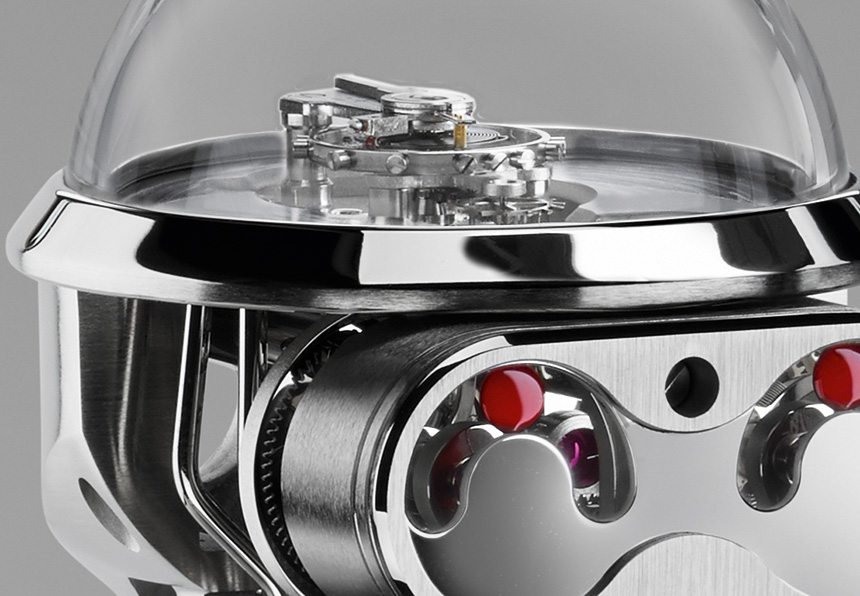 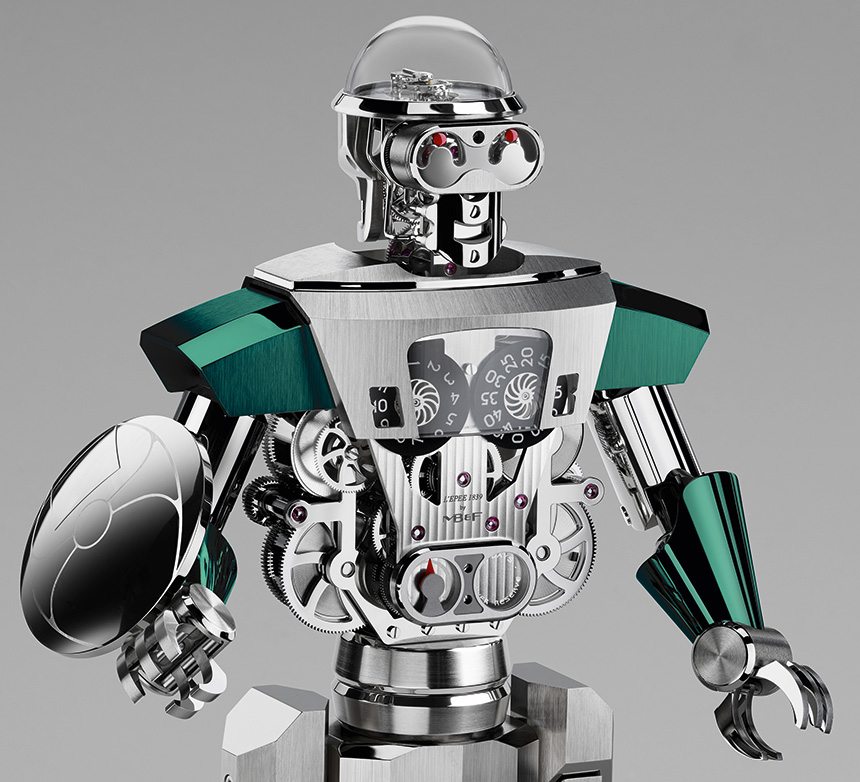 Smack-dab in the middle of the MB&F Balthazar’s cheerful visage is the standard time display, told via two rotating discs. Just below his chest, you’ll notice the double-barreled power reserve – indicated here in days instead of the usual hours. Seconds are displayed through his red eyes, which constantly “scan” his surroundings in repeated, 20 second retrograde intervals. But the other indicator that the MB&F Balthazar is running occurs beneath his polished glass dome brain, where the oscillating weight regulates the movement and lends an eerie sense of animation to his cold thought process, which hums along at a steady 18,000bph. Once rotated, the bark of the MB&F Balthazar’s dark side is far worse than his bite – here, the two personalities are employed as a manually-adjustable, dual-hemisphere (i.e., each “personality”) moon phase indicator on his chest, rated for 122 years of accuracy. You might also notice he’s carrying a shield finished with Geneva waves – but rather than stop ray gun fire, the shield is actually a cleverly disguised key used to wind his mainspring and set the time. 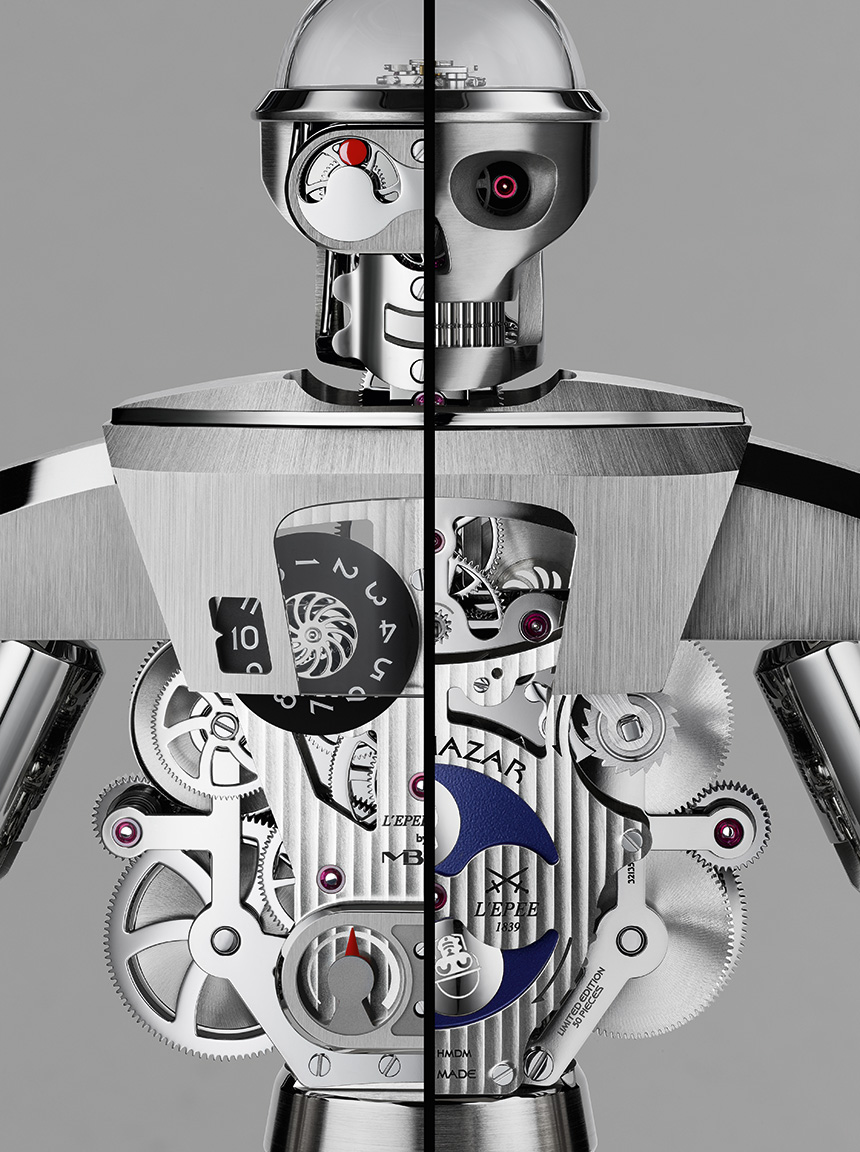 Par for prior MB&F machines, the price of the MB&F Balthazar robot clock starts at 52,000 CHF. Those interested in retiring their guard dog and introducing a Balthazar to their mantle will be able to choose between black, silver, blue, or green armor variants – each produced in 50 units only. mbandf.com