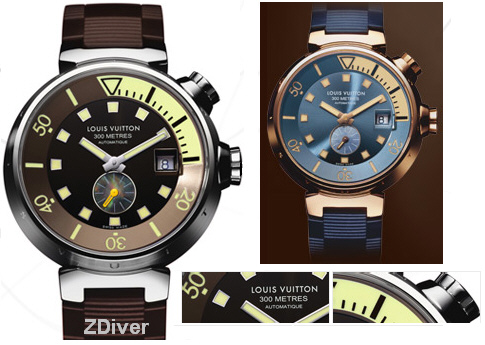 It is easy to find the style of the 1970s unappealing. Despite the fact that it is “coming back,” (from what I hear) it was an era of too many browns, too much synthetics, and too much hair. One thing however that the 1970s encouraged was large size. Big hair, big cars, big pants, and big watches. Especially the diving watches. While many of these things are coming back, so are big watches. 40mm cases are now considered small or average, and most watches, which matter, are approaching 44mm or even 50mm (and larger). The Louis Vuitton Tambour Diver takes large size, with its 70’s browns, and is able to present a very pleasing ,aesthetic highly reminiscent watch with a 70s modern design.

The first thing I noticed when I saw the case of the watch was its tapered look. The bottom of the case (close to your wrist) is wider than the top. It almost looks like a volcano sitting on your hand. The circular curve of the bezel and the rounded edges of the case are complimented by very angular features in the face of the watch. Square time markers, hands, and numbering add to the mod look and feel, and contrast well with the bulbous crowns which are asymmetrically placed. I like this look because it is very clinical in design. A symmetrical look often feels too designed and detracts from a watch’s appeal as an instrument. The whole idea behind a watch, is that it is a tool to do something. The Tambour Diver is a diving timepiece. It is meant to tell the time with the additional functionality of the rotating bezel to (classically at least) measure dive time and surfacing periods. What a nicely designed watch is supposed to do, as displayed here, is perform its primary function flawlessly, while harkening to a theme. In this instance the them is a diving watch based around a 70s design motif.

Another function of the large design and bulbous looks is to remind the wearer of it’s nautical theme. Ocean diving vessels are often rounded and large in order to combat water pressure at depths. They also operate to allow for function wearing diving gloves. Thus the large crowns and indicators on the watch are functional along with being attractive and reminiscent of the deep.

To accomplish this feat of style, the Tambour Diver excels because it is focused. You will see me complain a lot about watches trying to be too many things. This watch only attempts to be a pinnacle of the style and device it is purporting to be. You will not see the Louis Vuitton monogram on this watch, nor any amount of superfluous additions. This is what really takes this from being just another Louis Vuitton, or for that matter “luxury good.” I applaud this achievement and hope to own an example of one someday. The price is about $3,600 for the diving model with rubber strap.