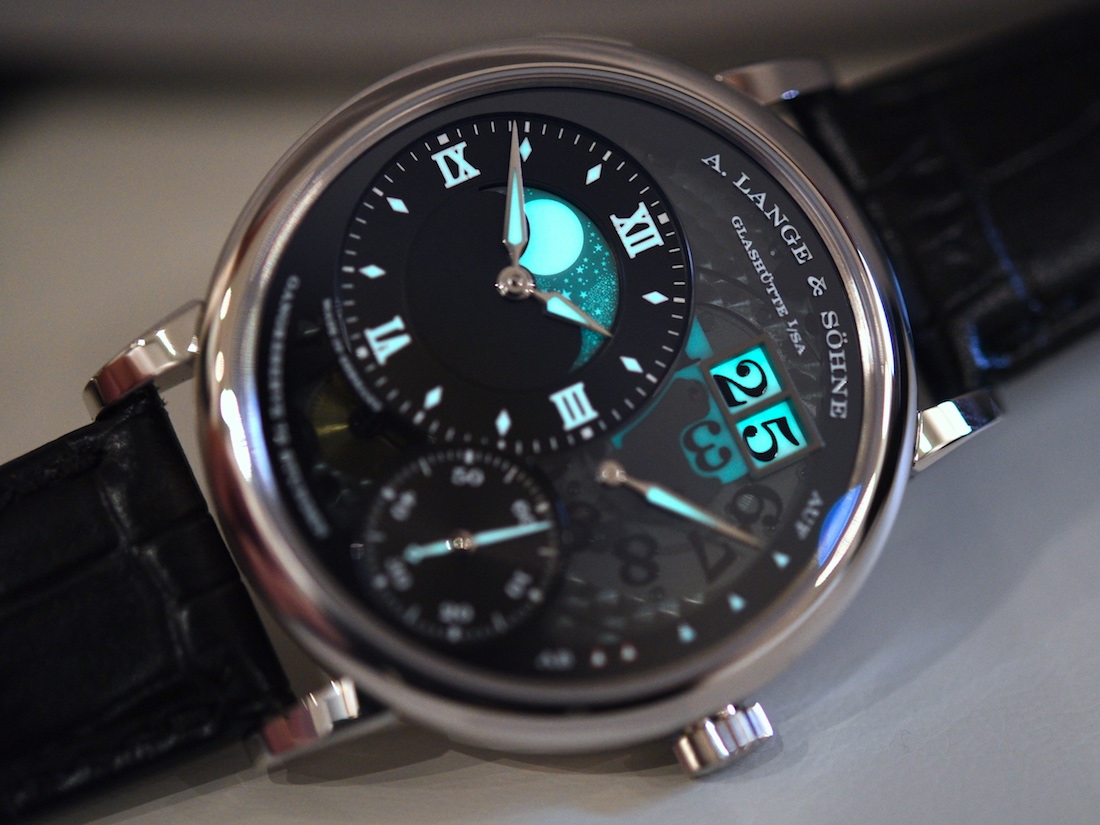 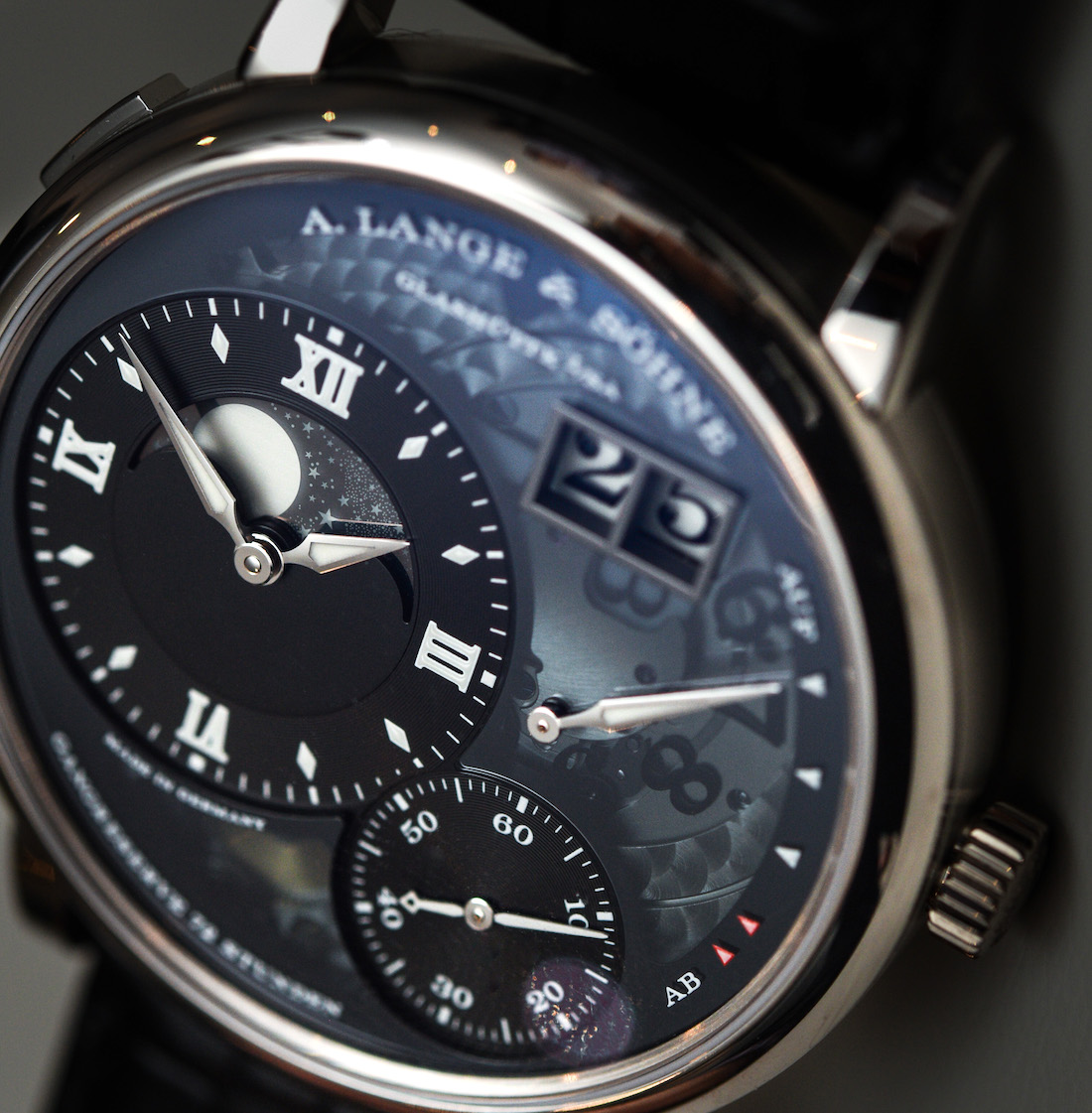 Here’s a question for you: can there be such a thing as a cool Lange? Elegant, sophisticated, restrained, calculated… Yes. But cool? In truth, I wouldn’t have thought so until I went hands-on with the A. Lange & Söhne Grand Lange 1 Moon Phase “Lumen.” 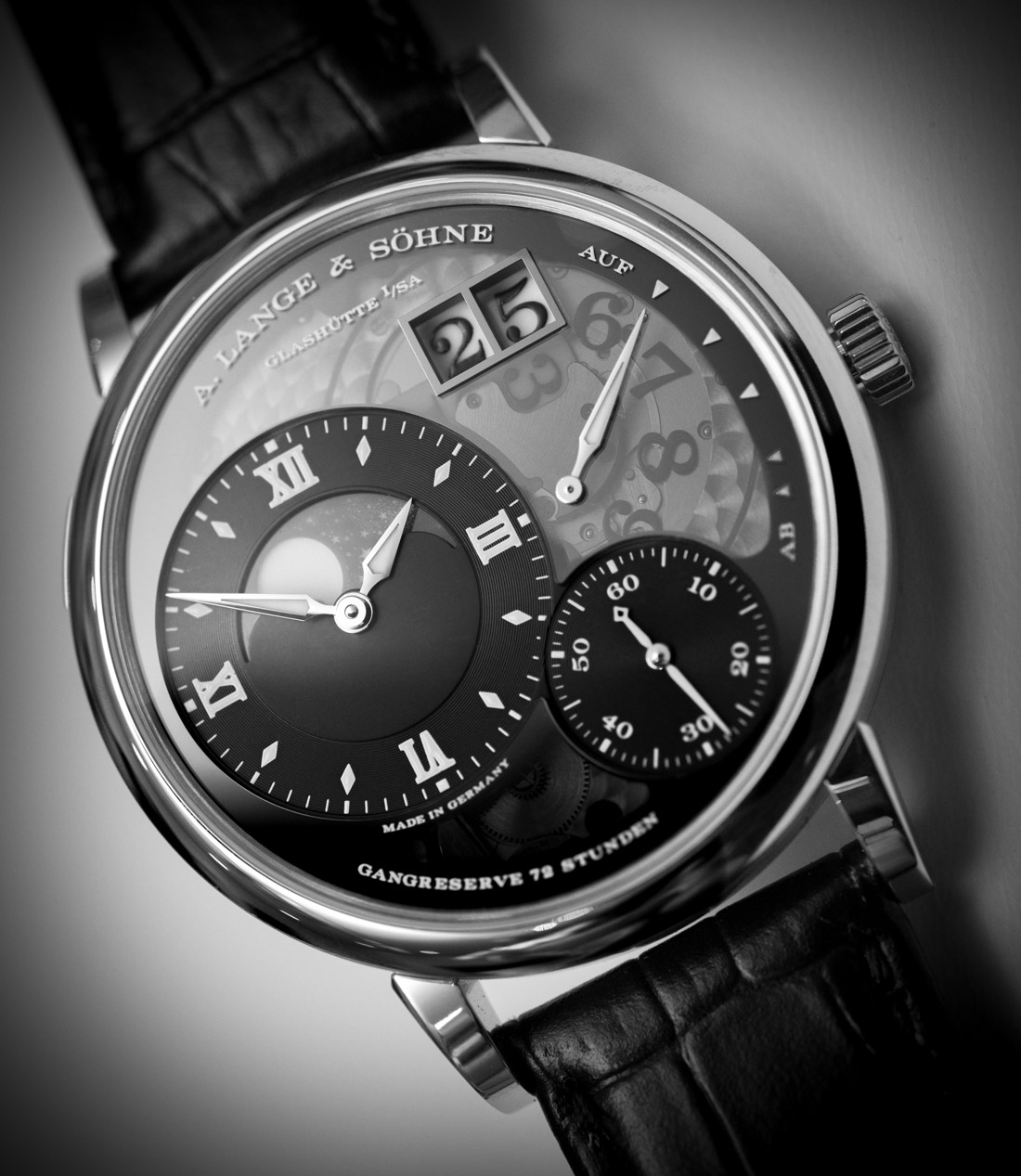 First, a bit of a background story to these images: I remember seeing and photographing this watch last year at SIHH 2016, but, due to an exponentially unfortunate series of multiple hard drive failures, some of my files and back-ups from that event I had to say goodbye to. Through some heroic data saving though I managed to salvage enough of these files and bring you a hands-on with this most unusual Lange.

After the first Lange 1 “Lumen” in 2013, Lange followed up in 2016 with the Grand Lange 1 Moon Phase “Lumen” as seen here, carrying on the semi-transparent sapphire crystal theme featuring what they refer to as a special coating. This surface coating of the crystal blocks most visible light from the outside but, for one, it gives way to the UV spectra that charge the lume, and it also lets the lume shine through from underneath it in return. The result is a very stealthy, smoky look that at the same time remains not only recognizably unique but just begs for attention – not a typical Lange treat, that. 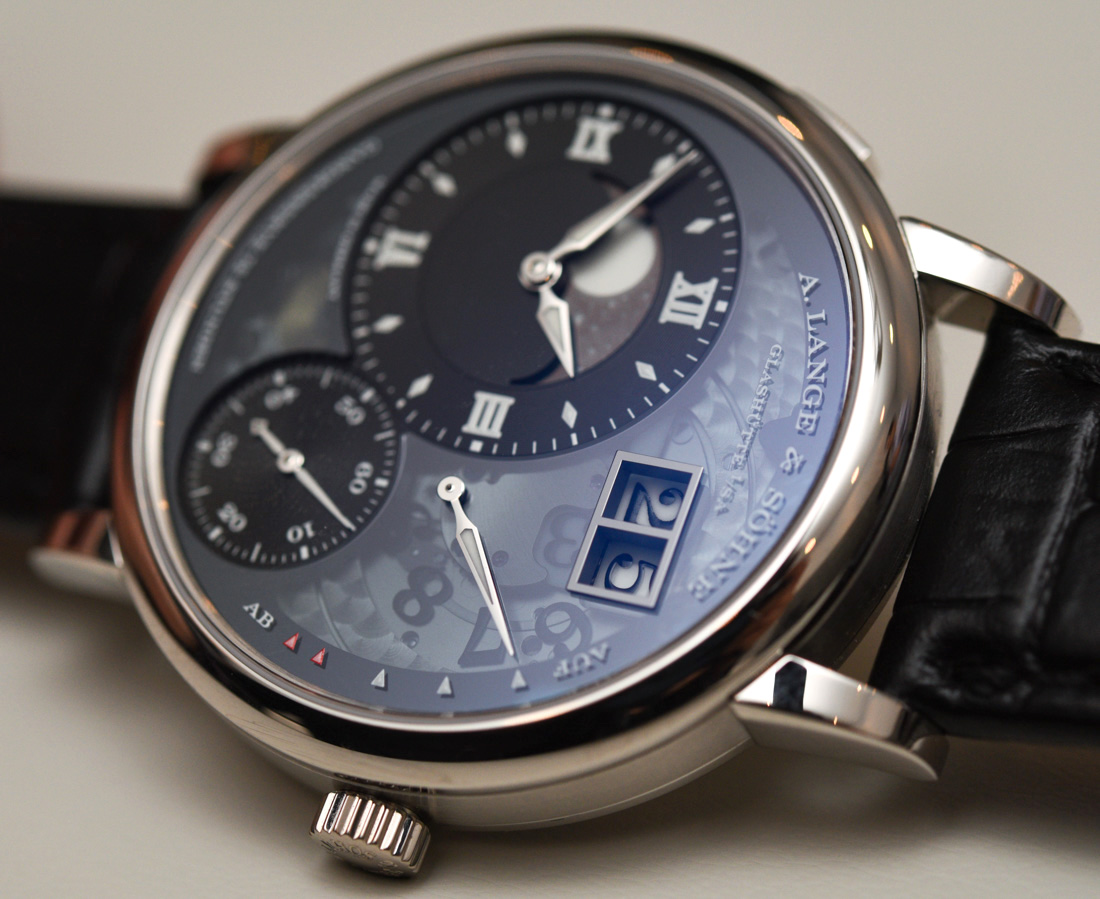 It was challenging to capture how this gray crystal really works in real life – and, like so many other AR-coated crystals, it too develops a blue-ish hue when hit by a strong light source, like the flash that we use for photography or a more powerful light bulb in the room (and typically does not happen with direct sunlight). When seen hands-on the end result is a bit like a Lange 1 that put its lace lingerie on – sort of –, providing a tease of a show. More factually speaking, you can surely see underneath the front crystal and appreciate all the fine finishing of the movement components, including polished springs, screw heads, and perlage-decorated plates, as well as the two discs for Lange’s weirdly named “outsize date.” 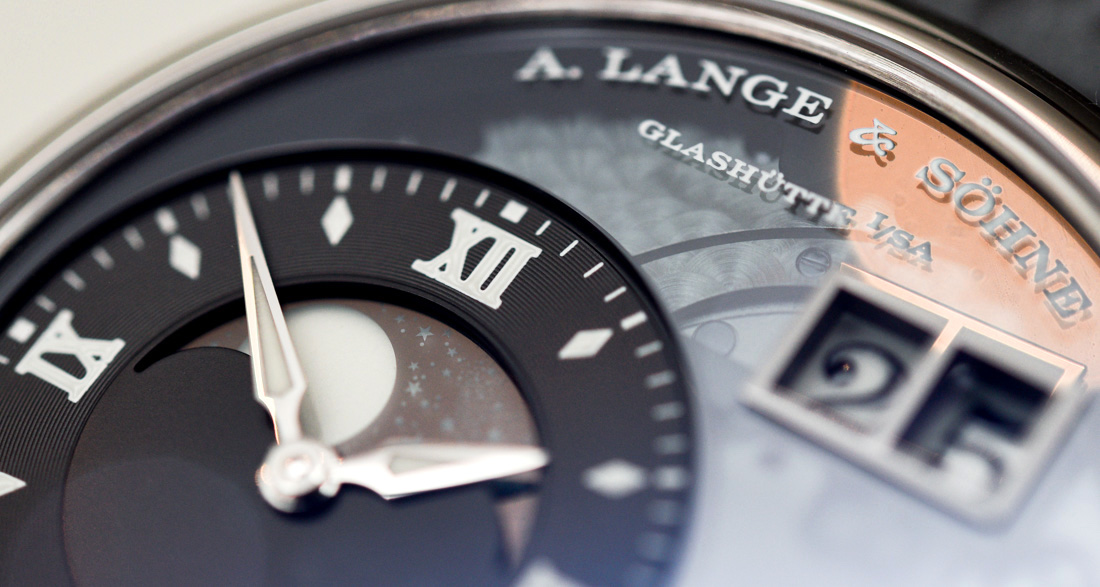 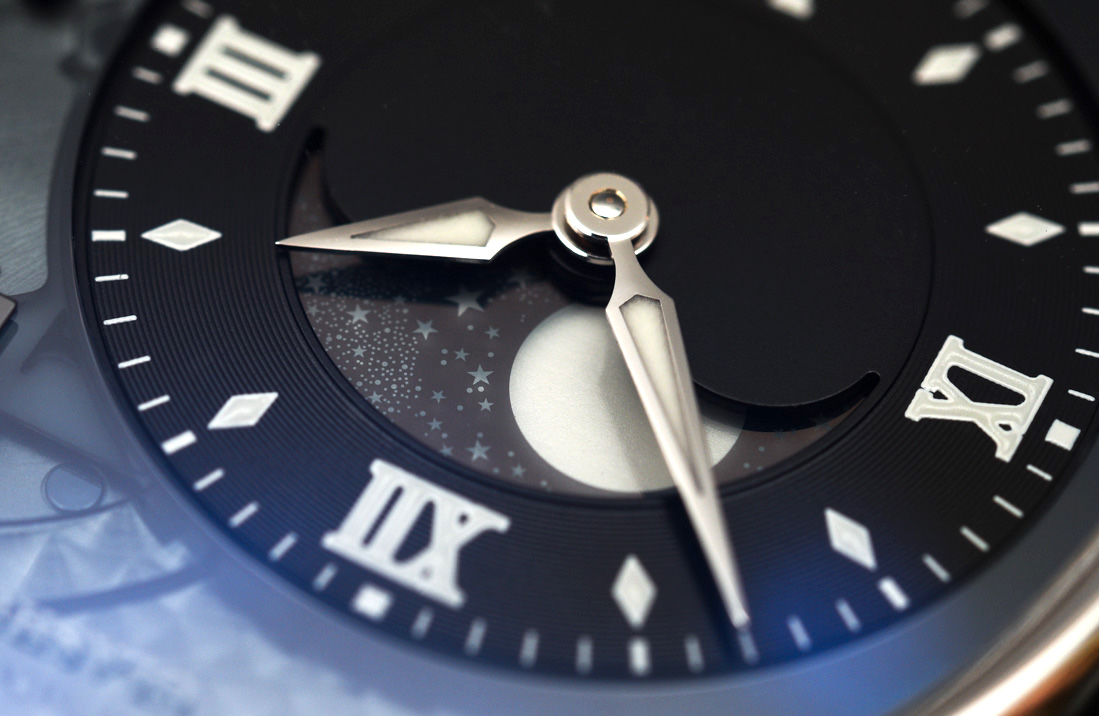 A common issue with transparent-dial watches is that legibility suffers big time as the reflective hands have difficulty visually contrasting against the shiny and busy backdrop. Thanks to this smoked look of the crystal, though, the power reserve hand stands out, and so does all the text, while the large date is easy to find both for its size and prominent framing. Meanwhile, time indications have maintained their solid black sub-dials, which means that Lange actually practiced their well-known restraint here and didn’t go overboard with the transparent theme like so many others tend to do. 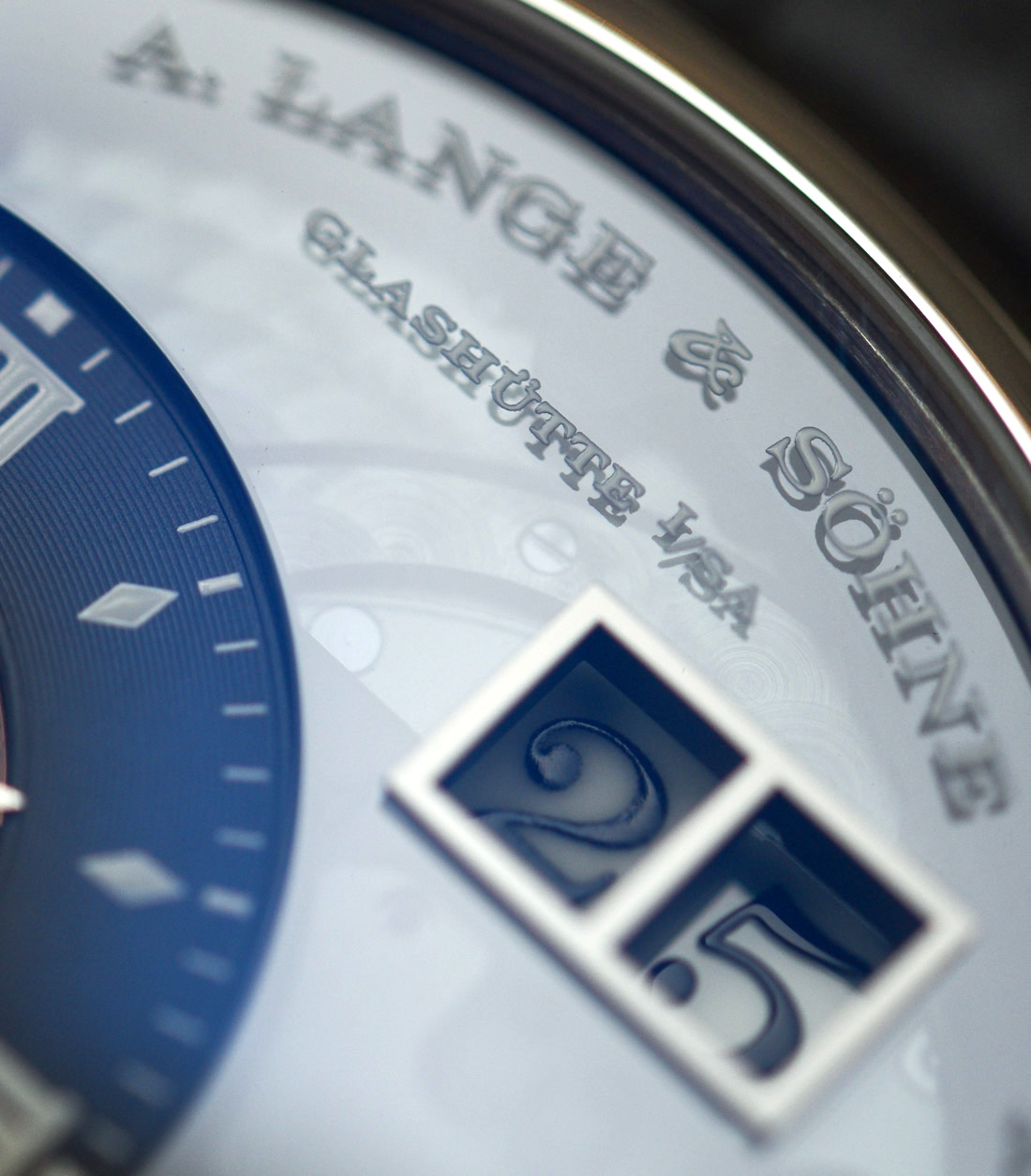 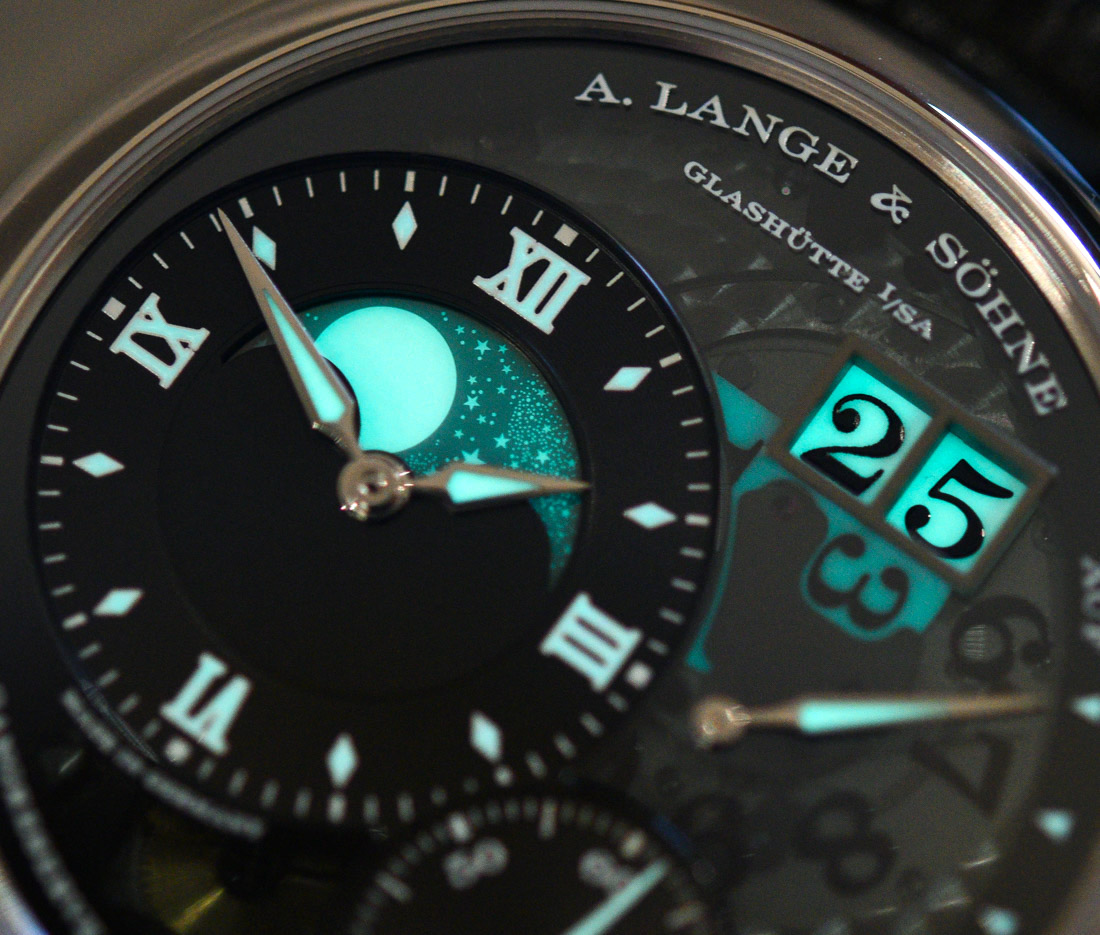 What’s new over the 2013 model, again, is the moon phase display, conveniently located inside the hour-minute sub-dial. Unlike Lange’s previous moon phase models which had solid gold discs, the A. Lange & Söhne Grand Lange 1 Moon Phase “Lumen” has a disc made of glass. This surface is first treated with a patented coating process after which a laser cuts out a total of 1,164 stars and the Moon. It isn’t the disc itself that glows, though, as it is illuminated by a luminous compound behind it. The moon phase display will be off by one day every 122.6 years. 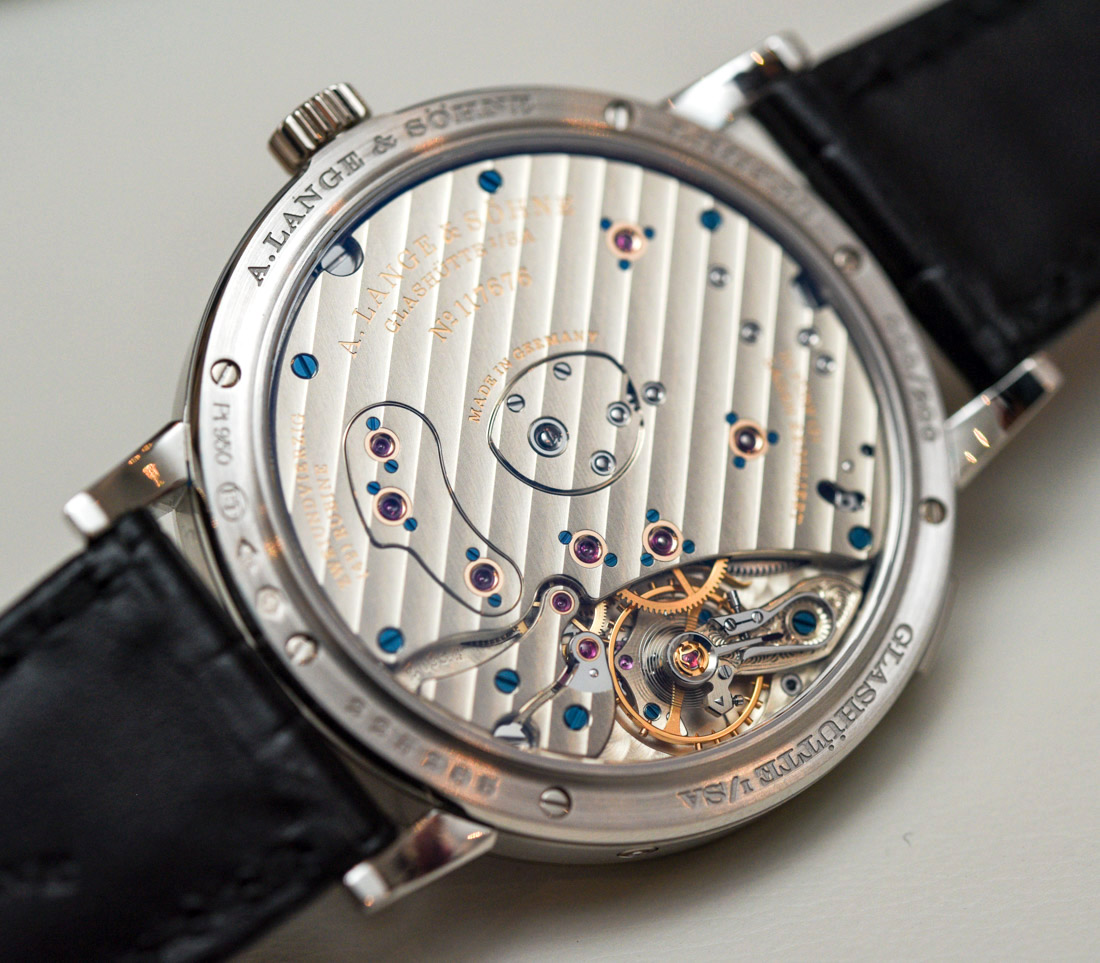 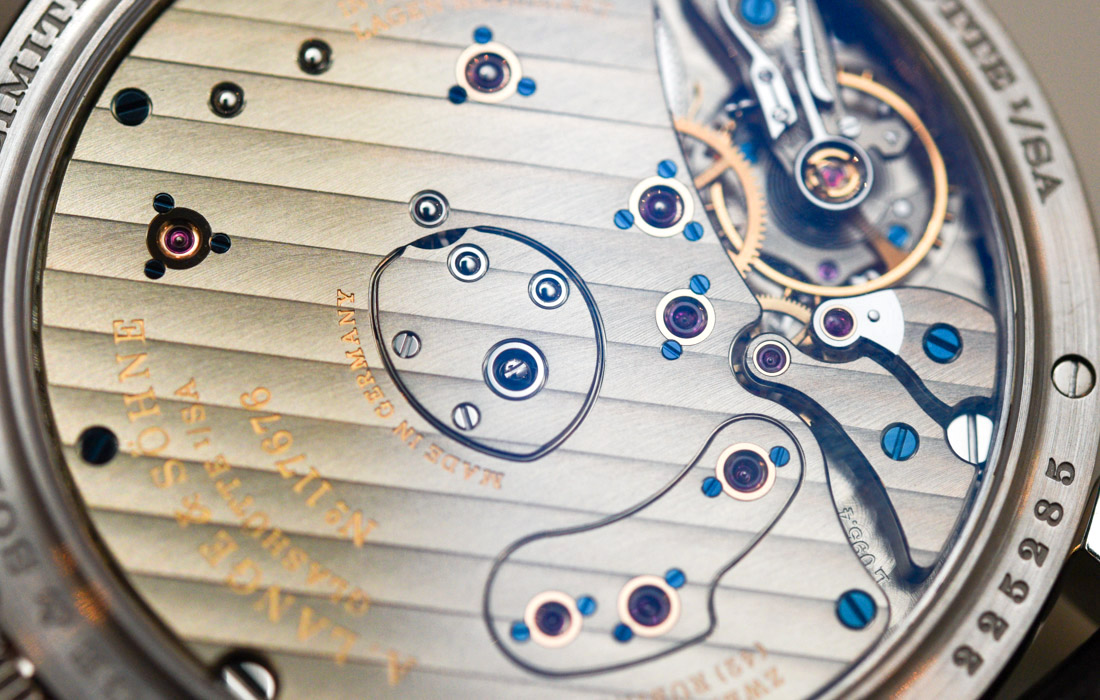 The movement partly exposed from the front and fully from the back is the hand-wound L095.4 caliber, featuring the quality standards and two-times assembly we have gotten used to seeing from Lange. The not very visually interesting three-quarter plate has been spiced up by what seems to be a random – but in reality, certainly well thought-out – layout of chatons, jewels, bearings, and gold text with three cocks, one supporting the balance wheel and featuring hand-engraved decoration in Glashütte watchmaking fashion.

The large mainspring barrel provides three full days of power reserve and the power reserve indicator on the front will help you not forget to keep this Lange 1 wound – or else you’ll have to reset the moon phase with the correction pusher set into the side of the case. If this wasn’t enough Grand Lange 1 Moon Phase details for you, check out our hands-on debut from 2014 here and for the latest Lange moon phase caliber check out this hands-on with three new Lange 1 variants. 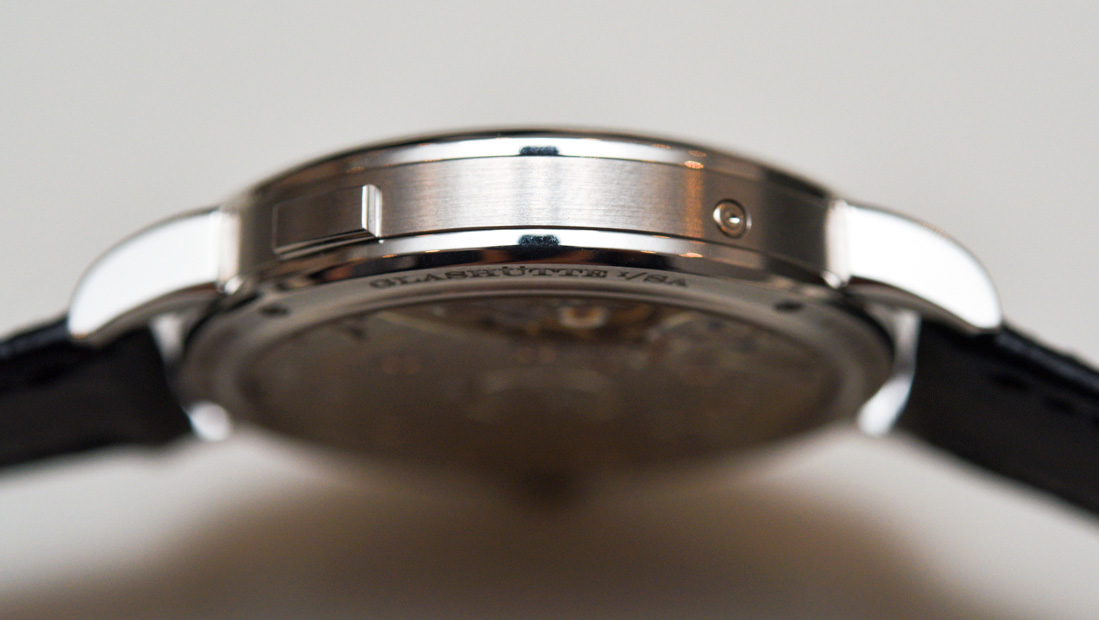 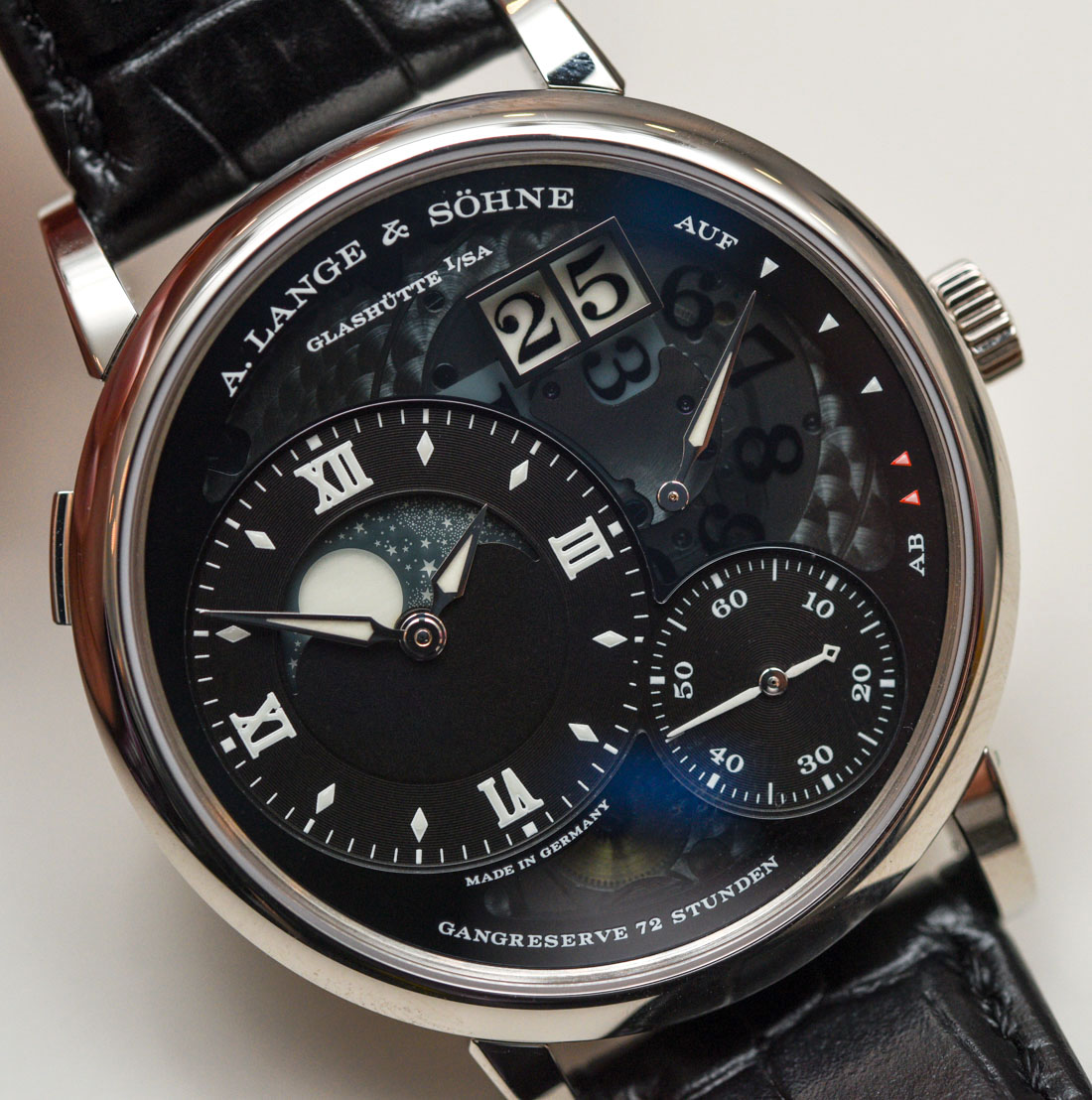 All tech specs and laser engraved moon phases aside, let’s get back to the original question and conclude, as I feel safe in saying: the A. Lange & Söhne Grand Lange 1 Moon Phase “Lumen” is about as showy and cool as we’ll see Lange get for a long, long time. It is very unusual because it bravely and very noticeably shows a lot more skin than previous Lange 1 watches – which renders it all the more surprising, as the Lange 1 is the definitive A. Lange & Söhne model and brands exercise extreme caution when making drastic changes with such bread-and-butter collections.

Cool, I think, yes. But I wouldn’t go so far as to say the A. Lange & Söhne Grand Lange 1 Moon Phase “Lumen” is a fun watch. It is absolutely fascinating to look at and admire, and quality of execution is of course spectacular… But it still is one very serious watch to hold and to wear as although it is adorably called the “Lumen,” it does everything it can to look as dark and intimidating as possible. That’s true Lange for you, in the best and yet most extraordinary way possible. 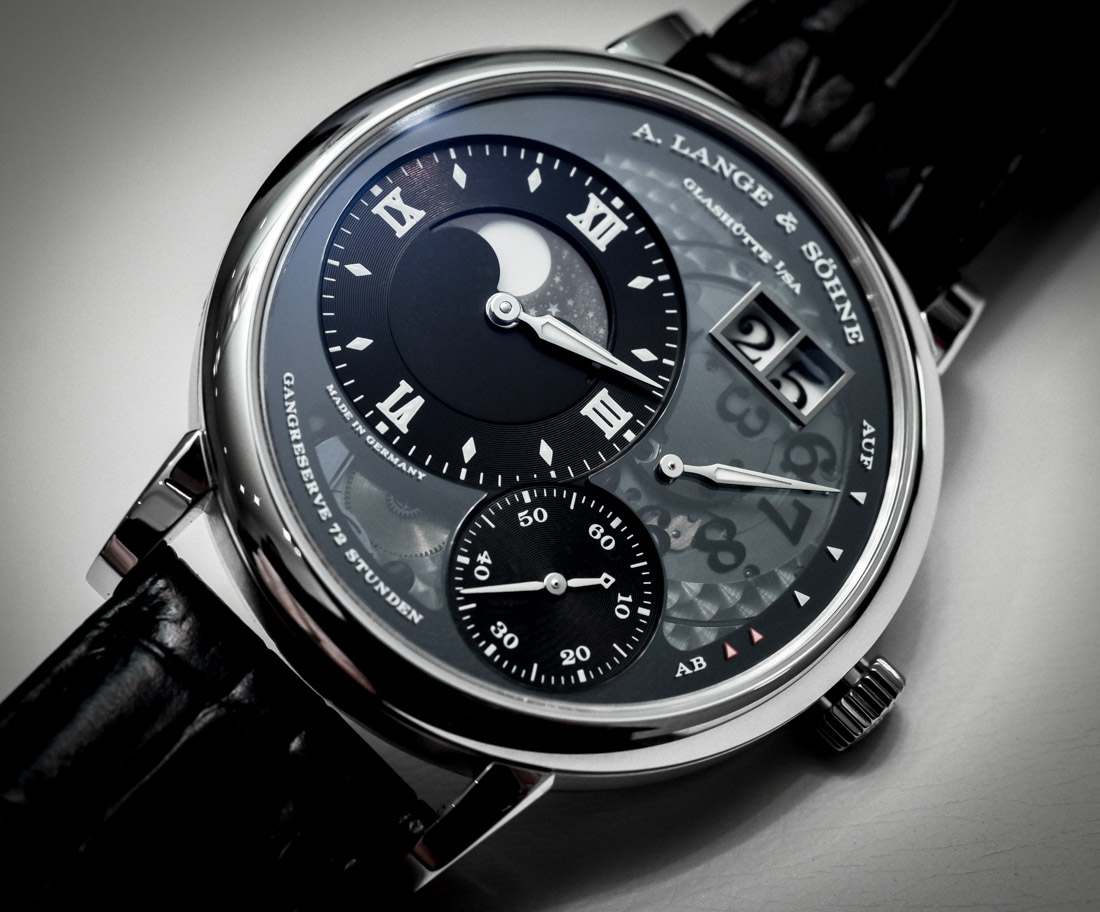 Wrapped in a 41mm-wide platinum case, it’s a choice of metal that makes it a heavy and hefty beast, and one that further helps sky-rocket the price of the A. Lange & Söhne Grand Lange 1 Moon Phase “Lumen” to  a whopping €69,600. That’s a lot even by Lange standards for what, in truth, really isn’t a very complicated watch. alange-soehne.com