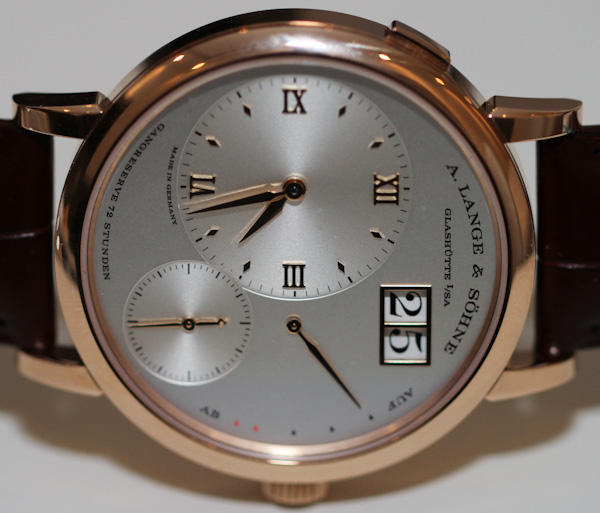 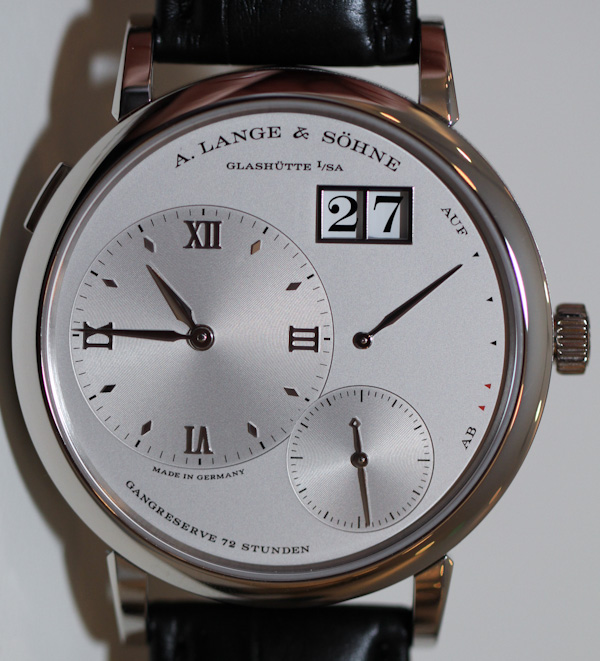 One of A. Lange & Sohne’s more quiet new releases for 2012 was this redesigned version of the Grand Lange 1 watch. Last year they released the great looking Lange 1 Daymatic with an automatic movement, and this year the Lange 1’s slightly bigger brother gets an update. This model is really something that mostly dedicated A. Lange & Sohne fans are going to understand, as it isn’t clearly an update, but more a slight revision. The Grand Lange 1 actually gets a bit smaller, but also thinner as well. Plus, the dial layout is now much more clean.

The original Lange 1 watch helped make the modern A. Lange & Sohne brand popular back in the 1990s. Its asymmetric design was highly unusual, and it was risky at the time. Now the Lange 1 is the brand’s flagship model. It comes in a 38.5mm wide case – which is nothing huge by today’s standards. When the Grand Lange 1 originally came out a few years ago it was 41.9mm wide and 11mm thick. It upped the size of the case and helped emphasize the larger stance of the watch by using a subsidiary seconds dial that overlapped the off-centered hour and minute dial. Even the “outsize” (big) date window overlapped the hour and minute dial. It was a cool watch, but I feel that its less than totally fluid dial appearance itched at Lange’s designers. 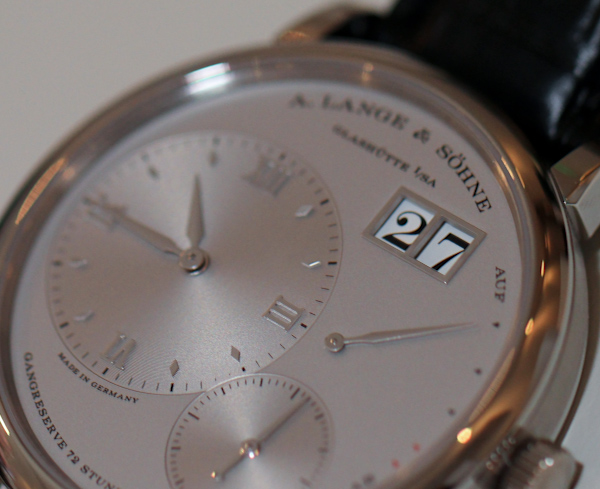 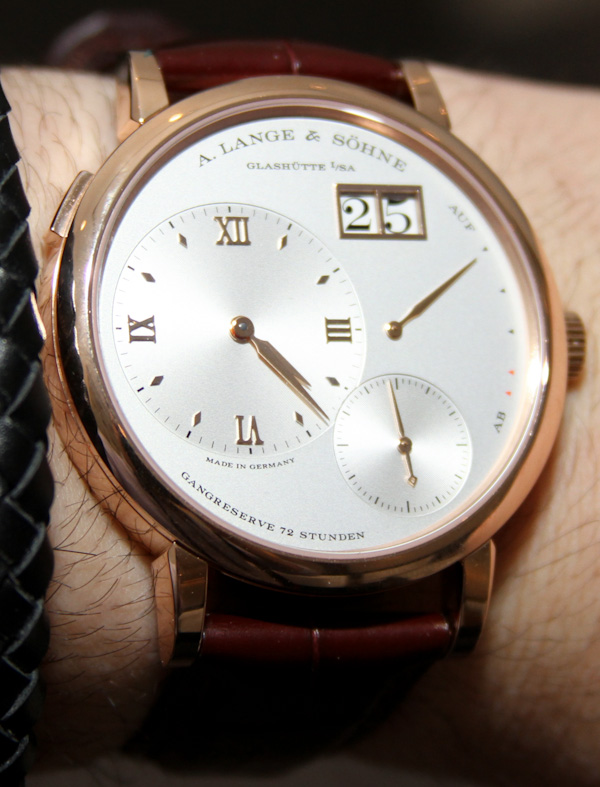 For 2012, the Grand Lange 1 gets a refined look that is more in-line with a slightly larger version of the Lange 1 collection. While the older Grand Lange 1 was 41.9mm wide, the new for 2012 models are down to 40.9mm wide. The case has also been thinned down to just 8.8mm in thickness. To create the appearance of a larger watch, the bezel of the Grand Lange 1 is a bit thinner than that of the normal Lange 1. Aside from that, the dials of the two watches are now extremely similar – making them harder to tell apart aside from the size difference (which is either a good or bad thing depending on the collector). For me I am happy. Not that a Lange 1 or Grand Lange 1 is in my price range, but if it was I would appreciate the new Grand Lange 1 all the more. The 38.5mm wide version is too small for my tastes, but I love the appearance of the dial. With the 40.9mm wide Grand Lange 1, you can have the looks of the original Lange 1 in a more contemporary size. Even then, about 41mm wide is not considered a large watch. 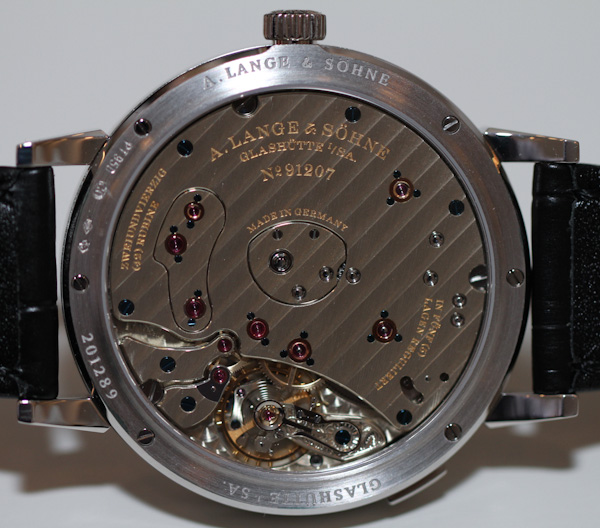 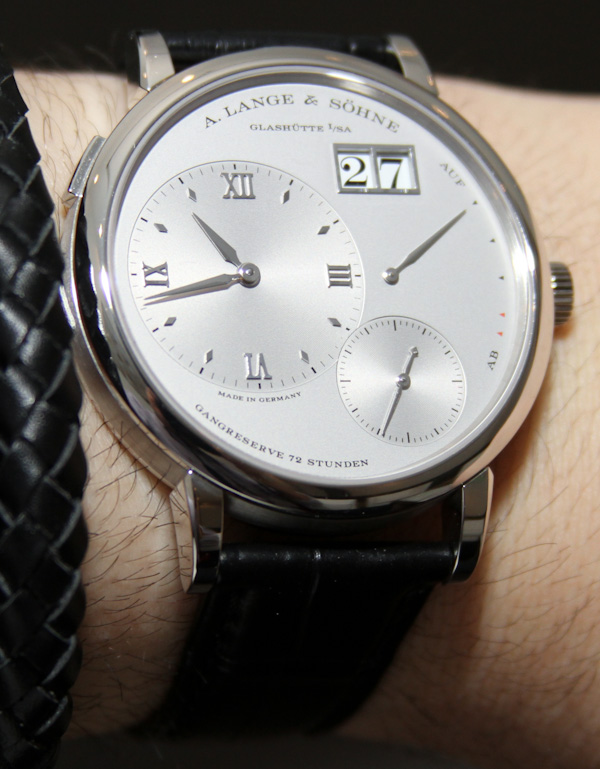 A. Lange & Sohne will offer three versions of the new Grand Lange 1 watch to start. Each are in a precious metal case. The Grand Lange 1 will be offered in either 18k yellow gold, 18k pink gold, or platinum – which is pretty much what you can expect. Fit and finishing are of course excellent – as is the solid silver dial and applied precious metal indicator and hands. Attached to the watch is a hand-stitched alligator strap.

The reason the indicators on the dial no longer overlap as they did on the older Grand Lange 1 is because the new for 2012 models uses a new in-house made A. Lange & Sohne movement. It is the caliber L095.1 manually wound movement and it offers the time with off-centered minutes and hours, subsidiary seconds dial, big date indicator, and power reserve indicator. The movement is immaculately decorated by hand and is visible through the sapphire caseback window.

On the wrist, the new A. Lange & Sohne Grand Lange 1 feel great. It feels more modern than the smaller model and the thinner poise is in line with the current expectations of high-end dress watches. Overall this might be a sneaky introduction by the brand but should prove to be quite popular in the brand’s best markets. Price for the Grand Lange 1 is $39,300 in yellow or pink gold, and $53,200 in platinum. 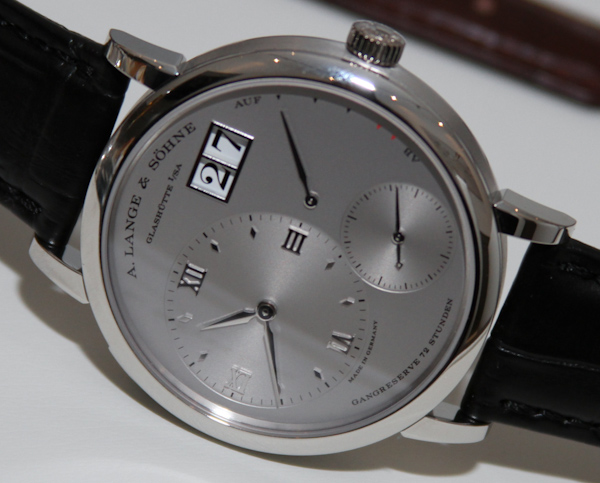 Tech specs from A. Lange & Sohne: