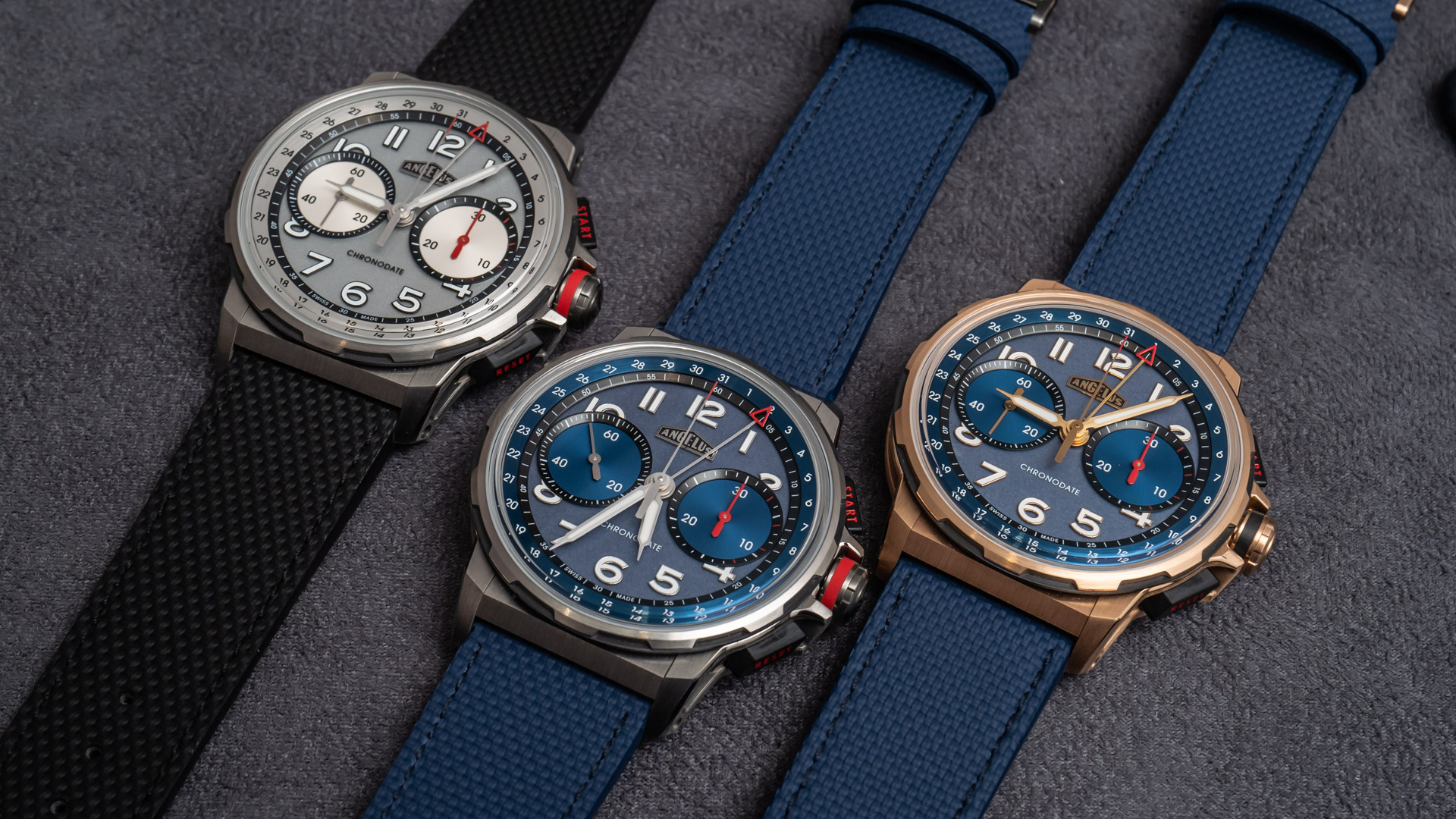 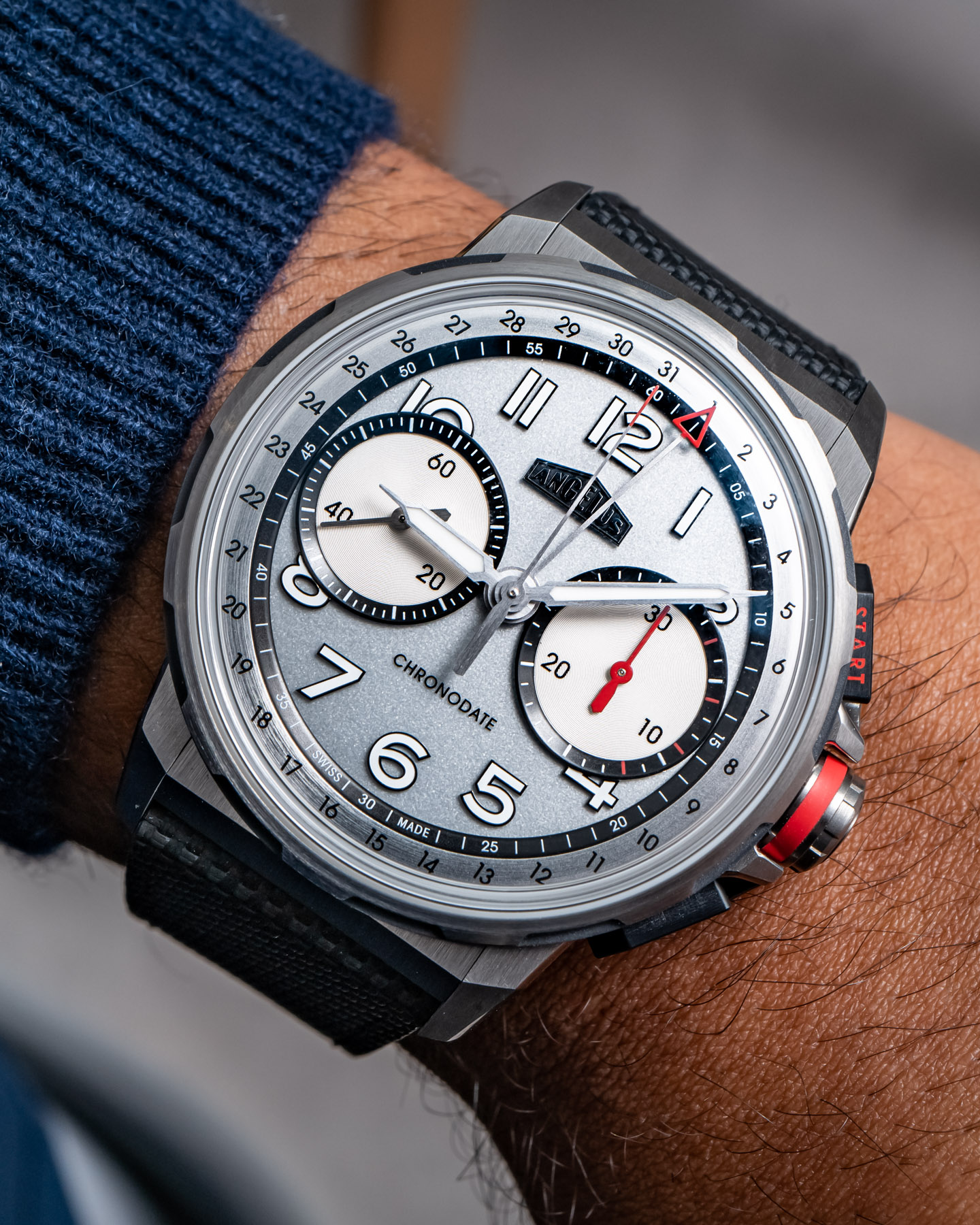 When Sebastien Chaulmontet acquired the Angelus brand, he was working at La Joux-Perret and was a noted Angelus collector. The historic Angelus brand was available, and with company money, he convinced the business to acquire Angelus as an excellent modern analog to Arnold & Son, which was another in-house brand at La Joux-Perret. The relaunch of Angelus had nearly nothing to do with the brand’s historic watches but was rather an interesting opportunity for the watch and movement designer to focus on futuristic designs with a focus on trying to make high-end complications (such as tourbillons and split-second chronographs) more affordable. In many ways, that mission was accomplished by the time Chaulmontet left La Joux-Perret after the company’s sale to the Japanese Citizen group.

Angelus has continued moving forward under La Joux-Perret and, for 2022, the brand has come out with its first vintage-inspired (sort of) product known as the Angelus Chronodate. This isn’t a vintage re-release but rather a more classically inspired set of watches in contrast to the modern futurism of other contemporary Angelus products. The Angelus Chronodate watches for 2022 debut in three limited-edition models. 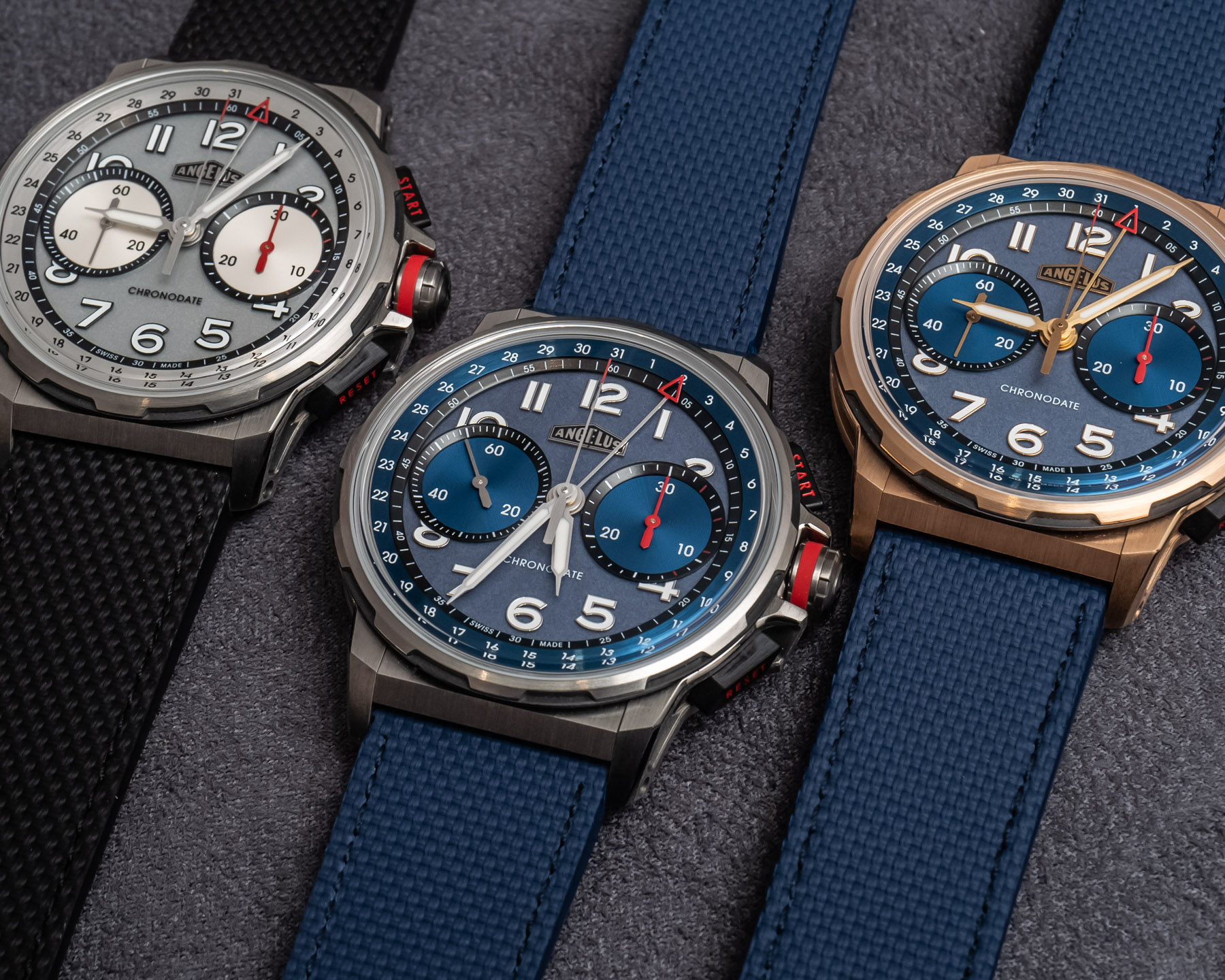 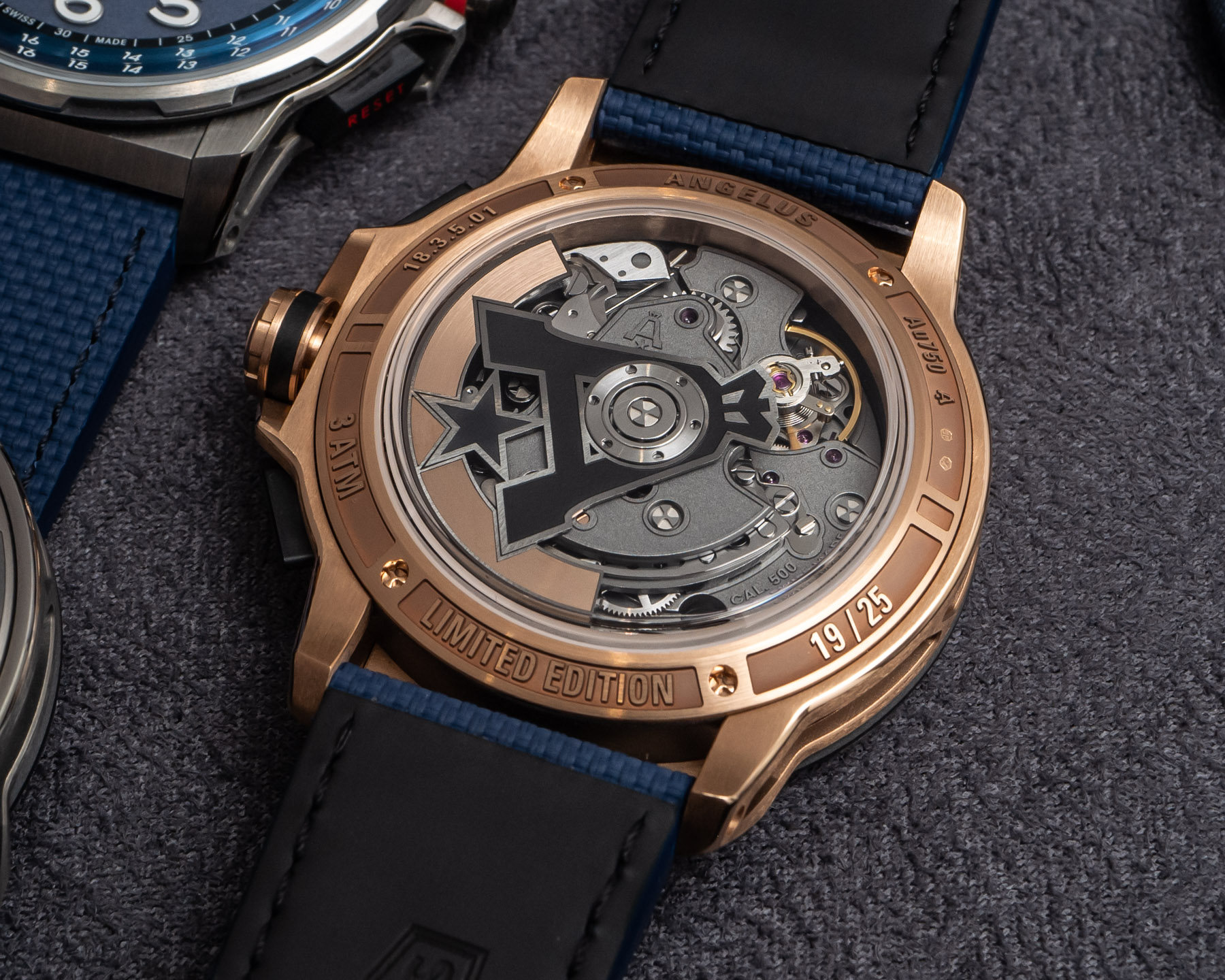 At the heart of the mechanism is an in-house movement known as the Angelus caliber A-500. This lovely automatic movement can be viewed through the sapphire crystal on the rear of the case and operates at 4Hz with 60 hours of power reserve. It is inspired by a historic movement that Angelus used that originally came out 80 years ago in 1942 that also features a pointer-style date and a chronograph complication on the dial.

The A-500 movement has a 30-minute chronograph that is column-wheel controlled and has a horizontal clutch. The movement is 7.9mm-thick and uses modern-style chronograph pushers of the types we’ve seen on hyper-contemporary sports watches inspired by the world of racing that have labels on the pushers. There aren’t too many dials like this that have a bi-compax display along with a pointer (versus window) date. The dial is designed with depth in mind, so there are multiple layers along with the applied Arabic numeral hour markers. It makes me so happy that Angelus resisted the urge to include something useless like a tachymeter scale on the dial. Accordingly, the Chronodate dial has all the indicators you need, and nothing you don’t. 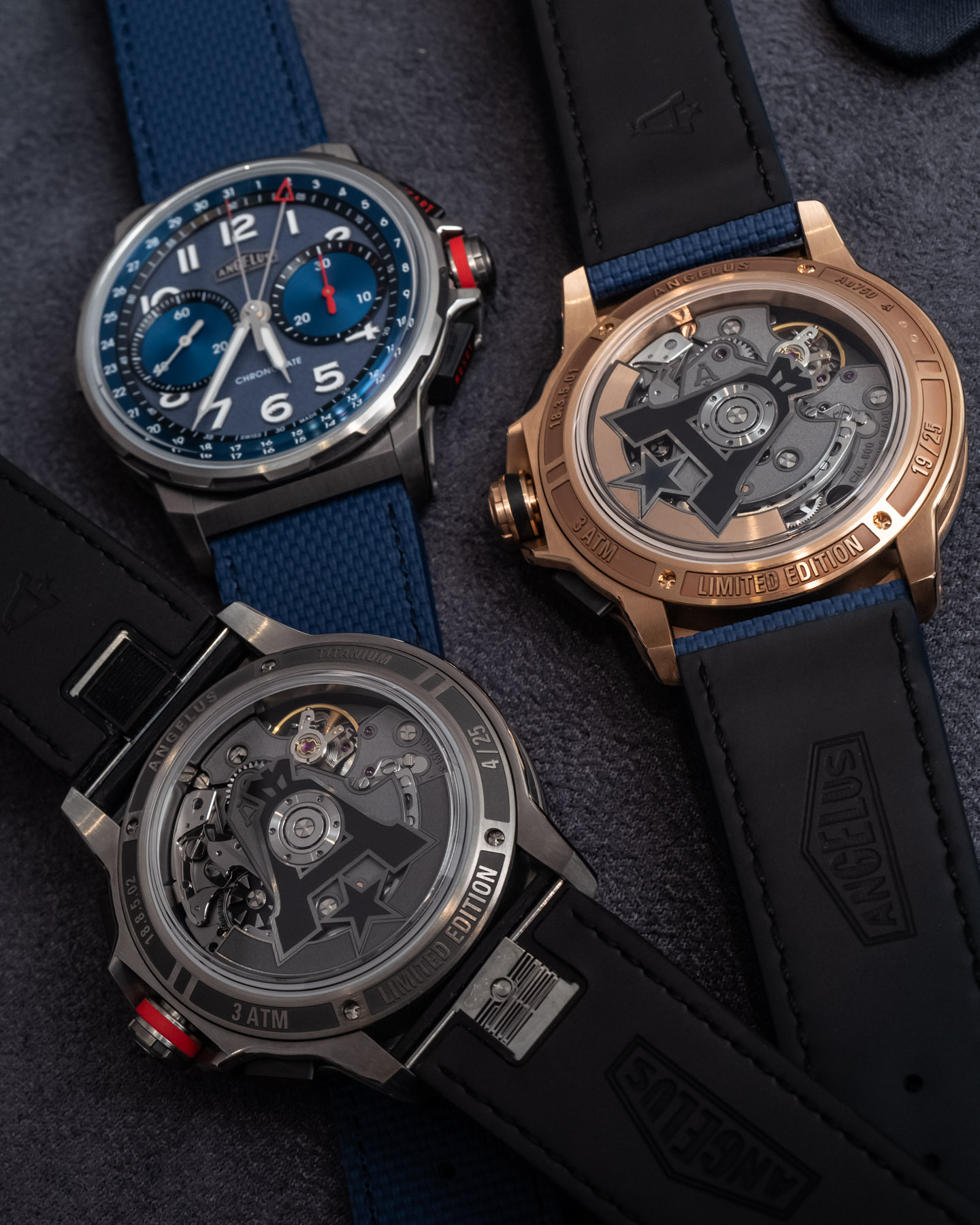 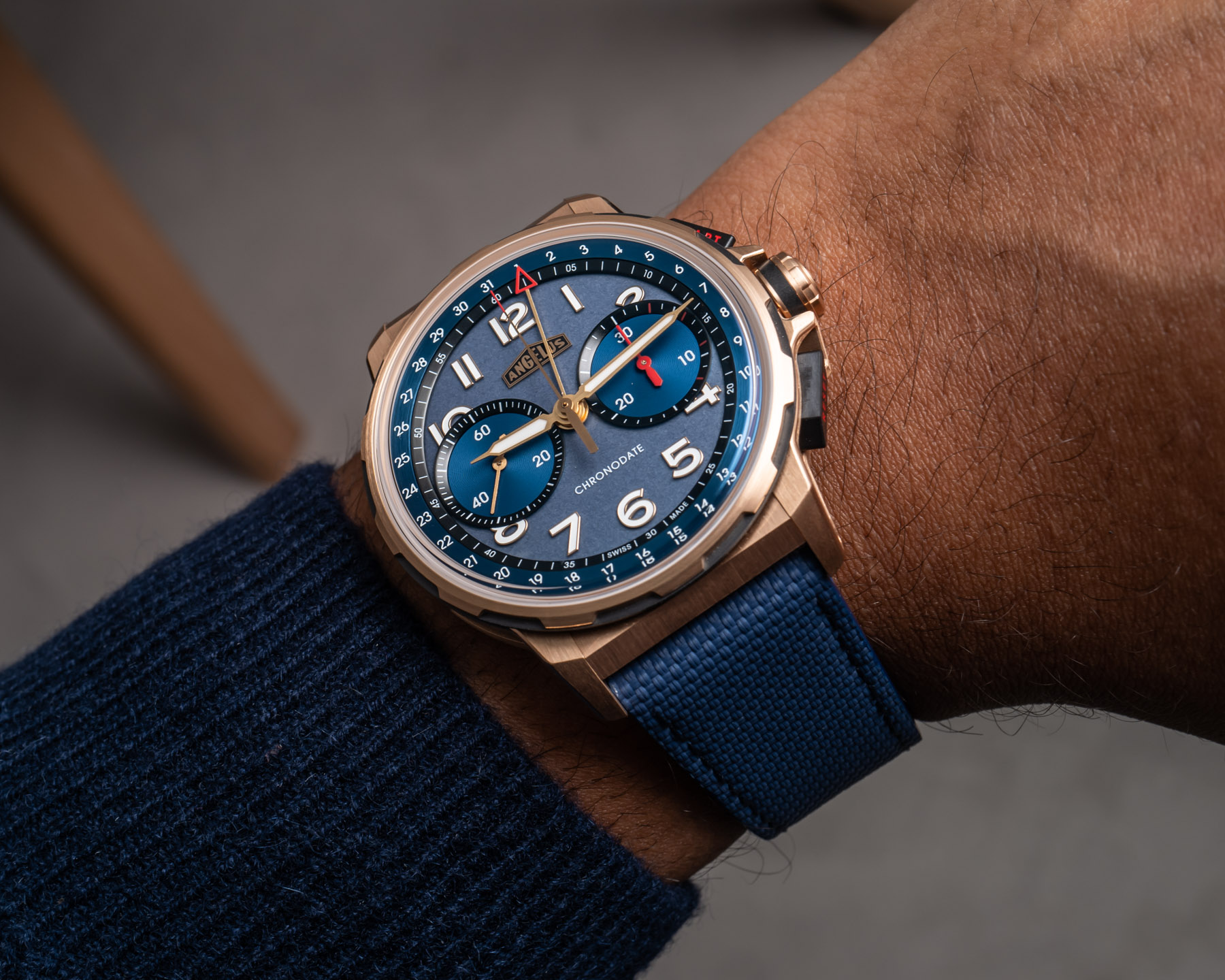 As a luxury watch, there are high-end elements here such as a solid-gold automatic rotor and an overall high level of finishing. But this is a sports watch, at the end of the day, so there are other interesting features such as a carbon ring around the movement to buffer it from shock. Over the dial is a box-style sapphire crystal which looks great. Unfortunately, the case is only water-resistant to 30 meters, which is likely due to the rectangular versus round shape of the chronograph pushers. Size-wise, this isn’t a small watch being modern in proportions with a 42.5mm-wide case that is 14.25mm-thick. It wears really comfortably thanks to the shorter lug structures that allow the textured rubber strap to immediately angle downward.

To produce the Chronodate as such a high-end model is interesting for Angelus, a brand that has been trying to break market trends and offer high-complication watches at a lower price pont. With the Chronodate, the brand adopts a different stance trying to focus on the overall design and the combination of in-house movement and theme, which rides a line between vintage-inspired and contemporary. Angelus debuts the Chronodate with two versions in titanium — the reference 0CDYF.W01A.K009B with the silver dial and the reference 0CDZF.U01A.K009H with the blue dial. For a more traditional luxury experience, Angelus also offers an 18k red gold version of the Chronodate with a blue dial as the reference 0CDZE.U02A.K009H. Each of the models will be produced as a limited edition of just 25 pieces. Price for the Angelus Chronodate watch is 22,900 Swiss Francs in titanium and 42,900 Swiss Francs in 18k red gold. Learn more at the Angelus website here.