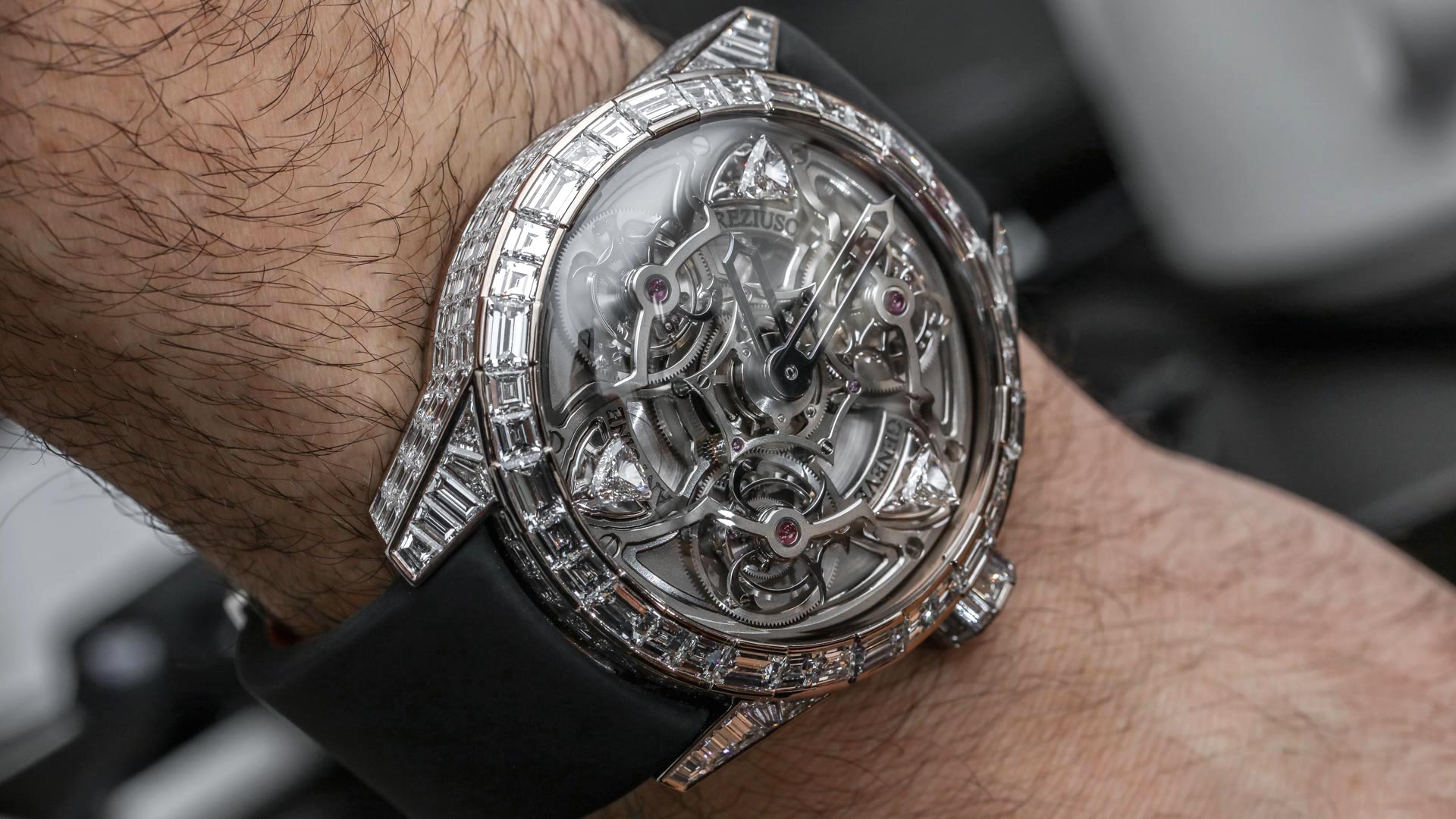 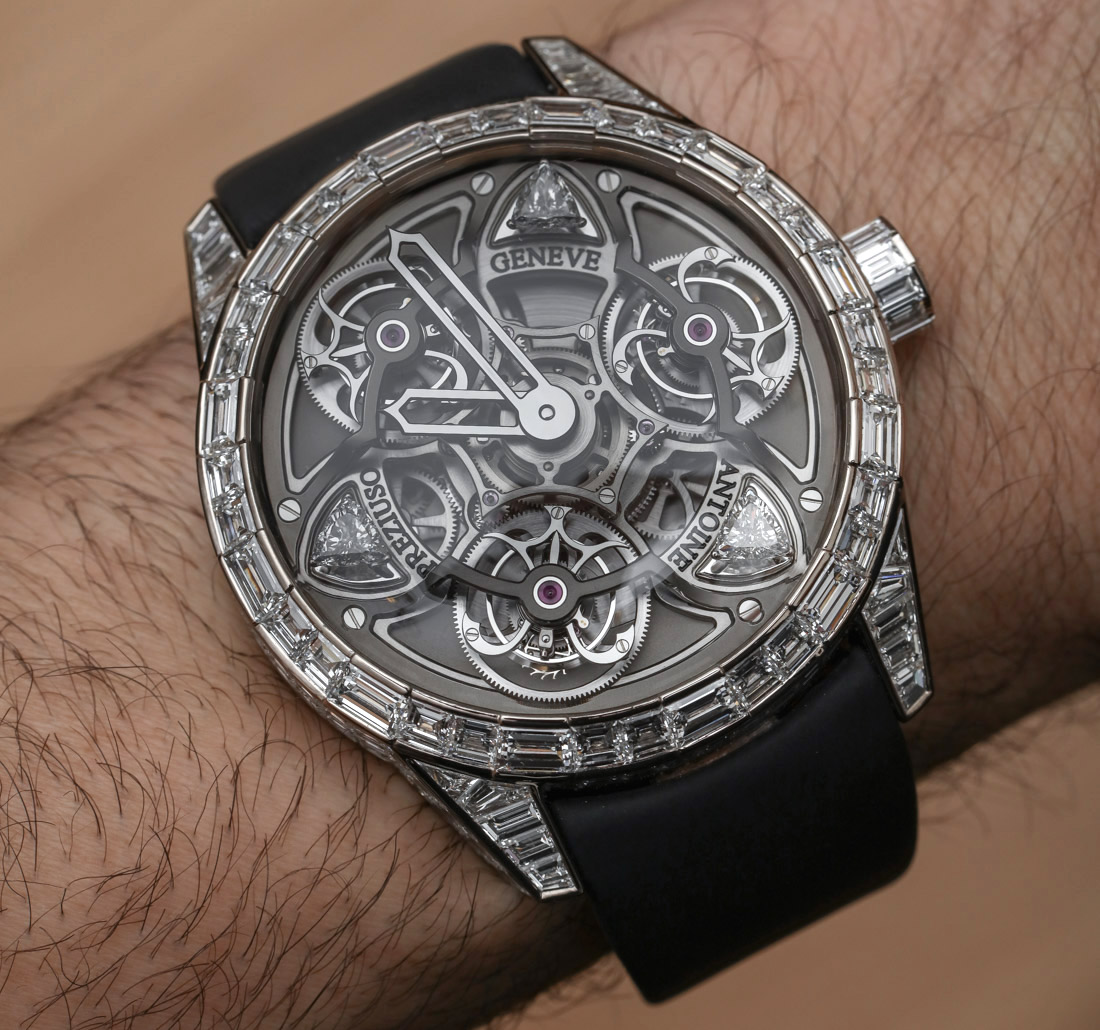 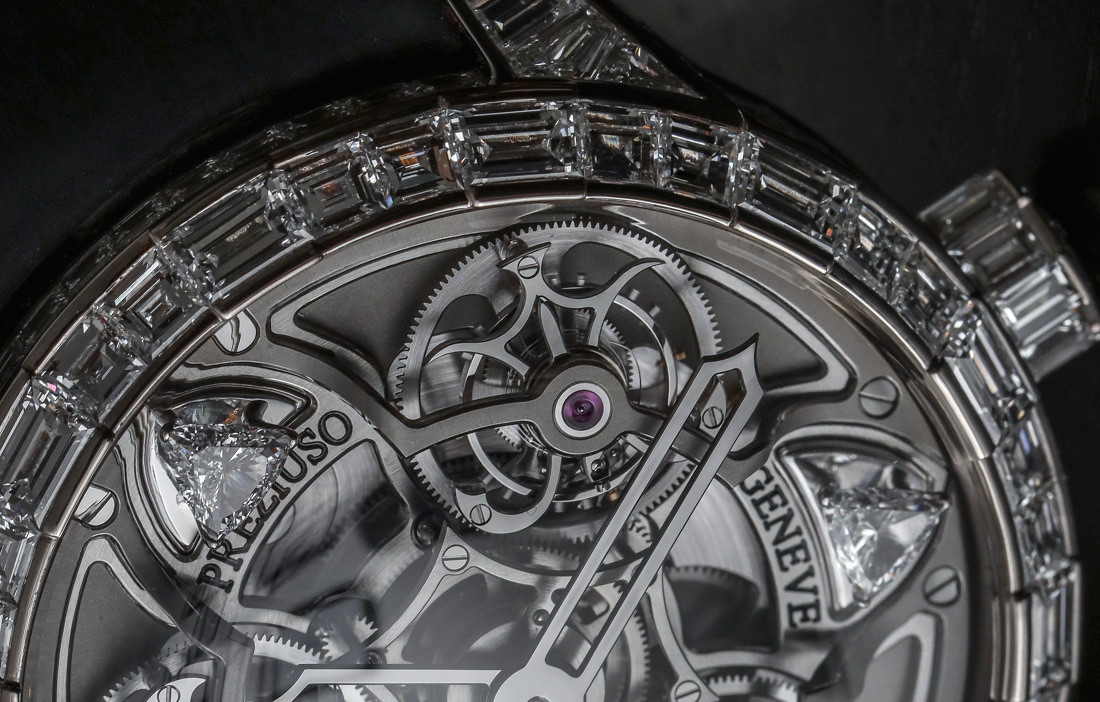 The Antoine Preziuso Trillion Tourbillon of Tourbillons includes about 24 carats of high-quality Wesselton diamonds on the case and dial. In addition to the large baguette-cut diamonds on the case there are three conspicuous “trillion-cut” triangular diamonds on the dial which are elegantly mounted in order to facilitate light reflection and move with the dial that makes one full rotation every 10 minutes. All this comes in at a price tag in excess of one million dollars. 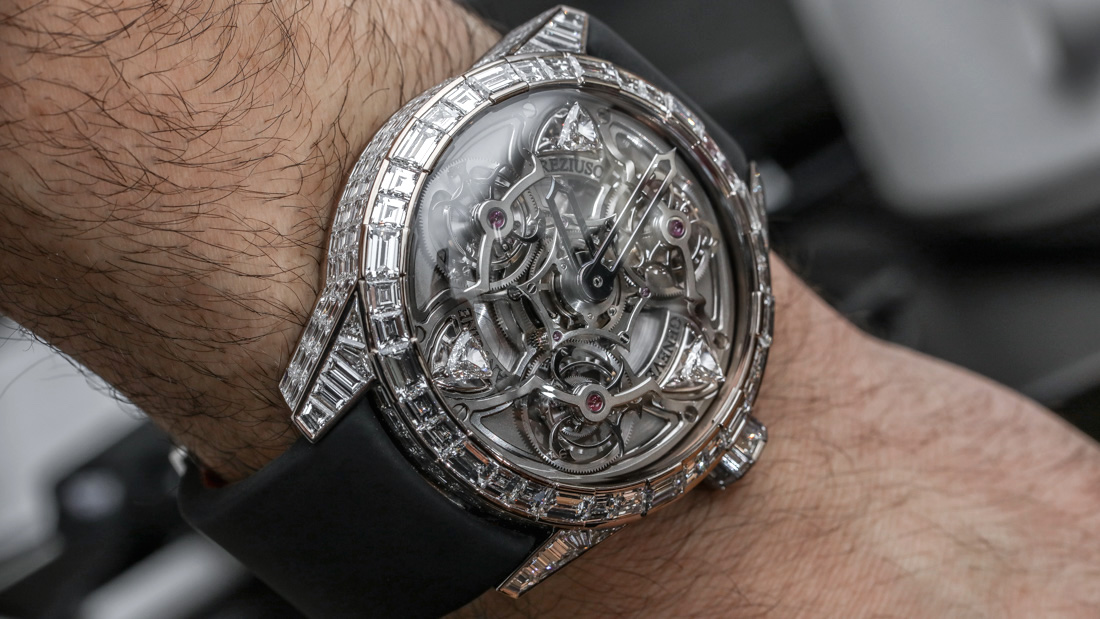 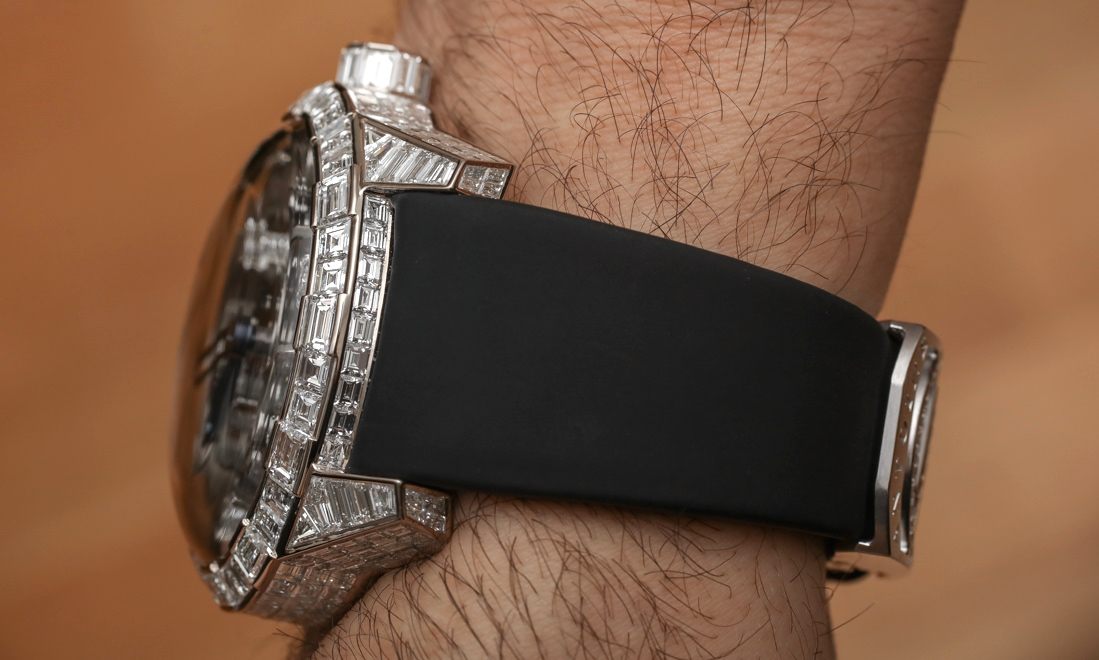 At 47mm wide (and 14mm thick) the Antoine Preziuso Trillion Tourbillon of Tourbillons is in 18k white gold but in reality if you order this watch, they will produce it for you in whatever metal you like (gold or otherwise). Though gold will make for the most efficient material in regard to all this diamond setting which makes the case material actually difficult to see. While I appreciated the complex case design of the original Tourbillon of Tourbillons watch from a few years ago, this simplified case is certainly more classy for more settings. All the mechanical intrigue of the movement is maintained in the view of the well-finished movement. 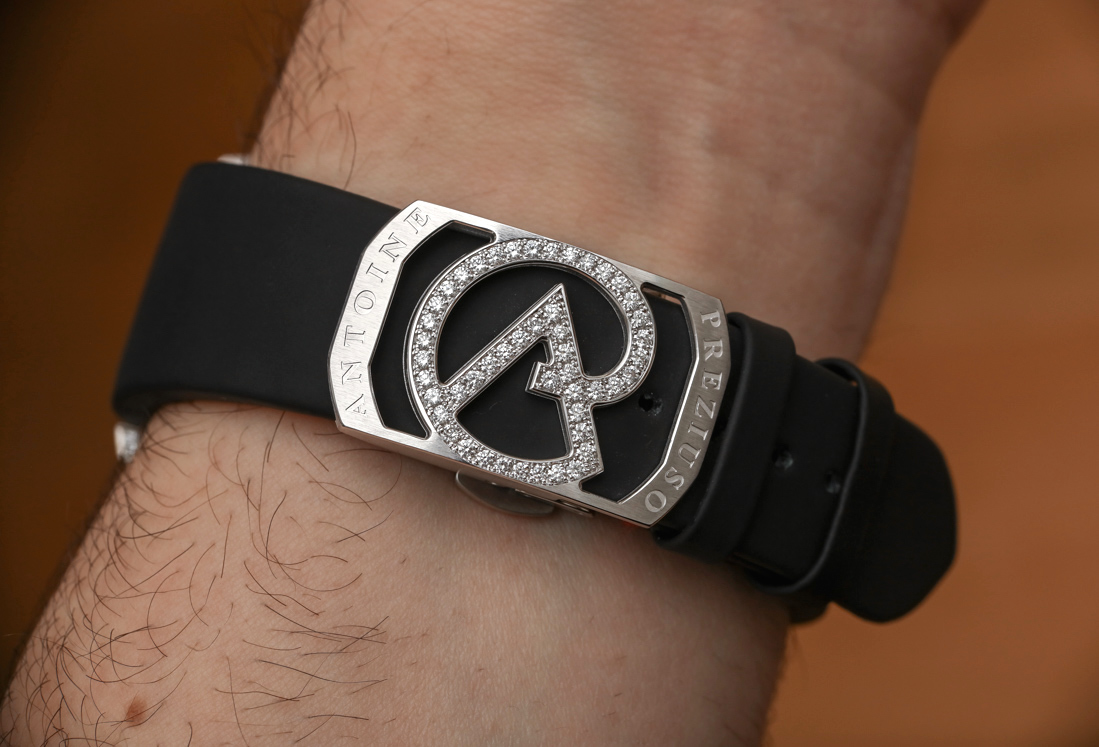 Antoine Preziuso says that 233 baguette-cut diamonds decorate the case while another 21 diamonds decorate the crown. That includes one large solitaire diamond mounted in the crown as viewable from the dial. More diamonds decorate the strap buckle, and of course there are the three “trillion-cut” diamonds on the dial which are 0.76 carats each in size. As I said above, the Trillion Tourbillon of Tourbillons has over 24 carats of diamonds which is of course part of the large value of the watch. More so, the stones need to be carefully acquired, sometimes cut, and of course sorted and set into the case, which itself is a complex and time-consuming process. This remark is important because the value of a diamond-decorated watch of this caliber is related to more than the sheer market value of the precious stones themselves. 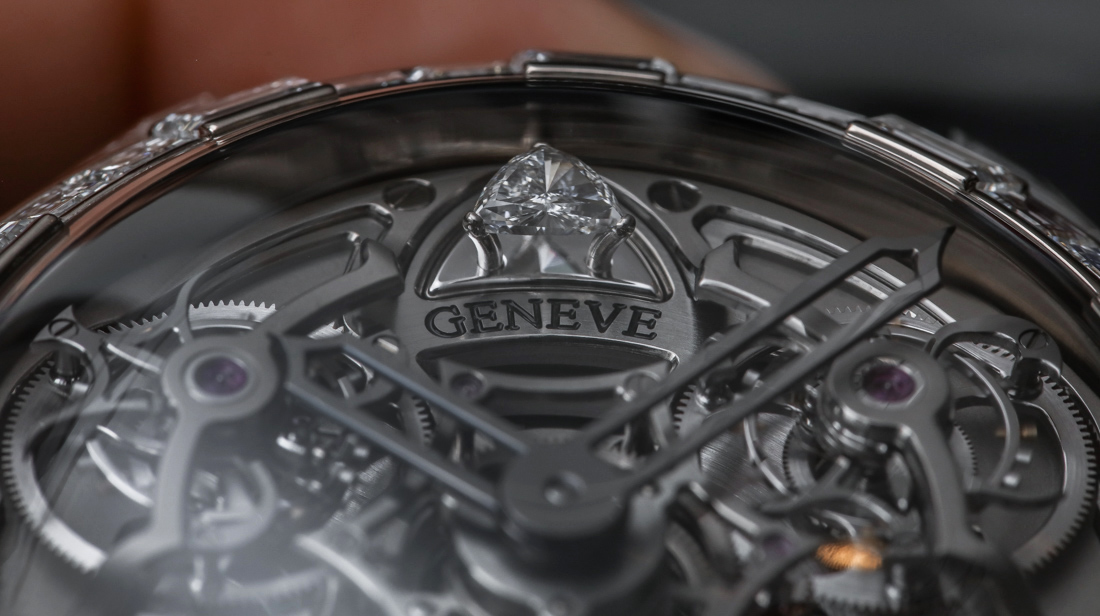 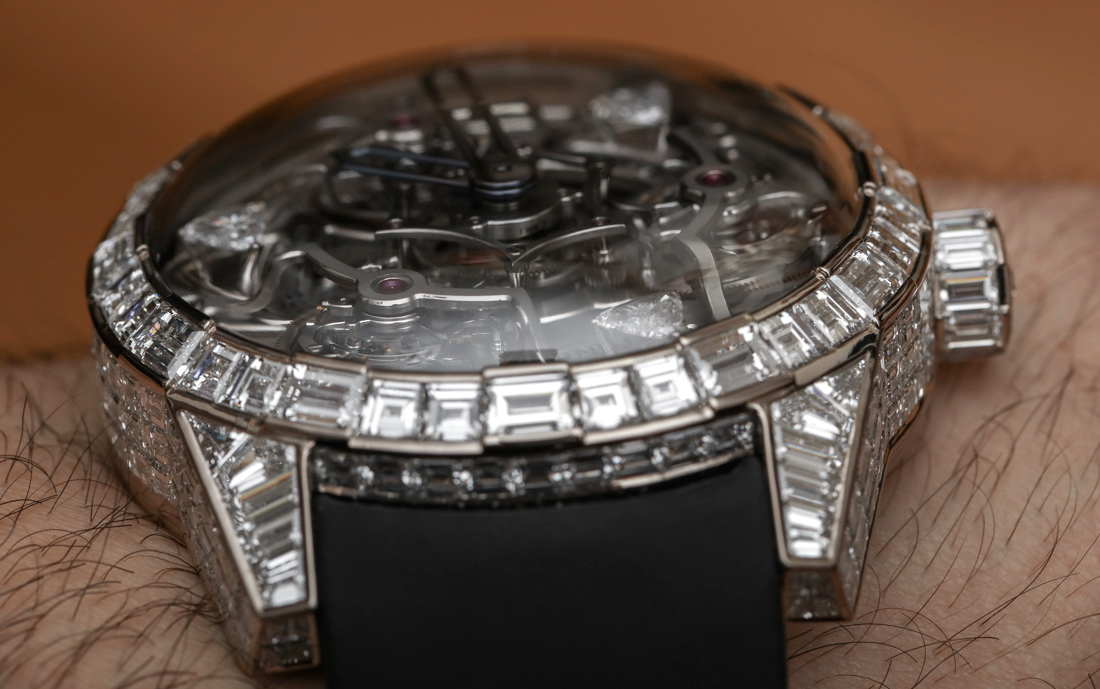 I also want to add that this is one of those less-common super luxury watches with diamonds that nevertheless remains masculine in character. Sure it sparkles and glistens as any diamond-set watch should, but the baguette-cut shape of the case-mounted diamonds and their size add a masculine appeal to something that many people write-off as being strictly feminine. On that note I will say that there are a good number of very manly diamond watches out there. 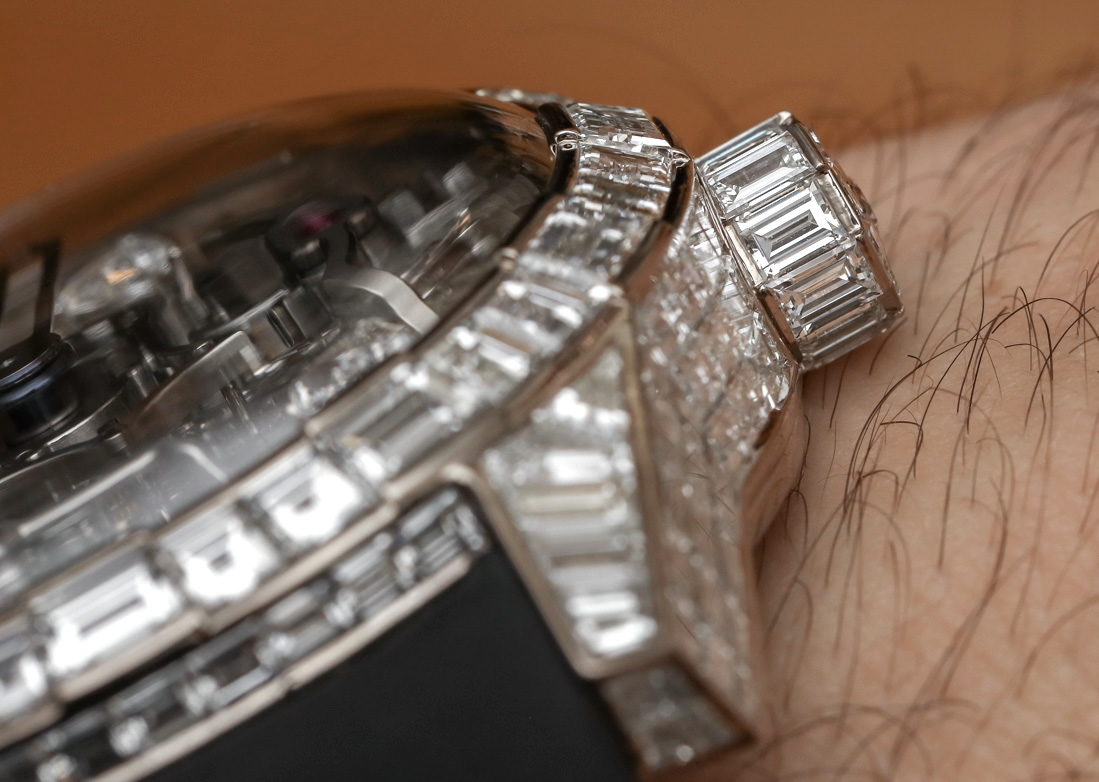 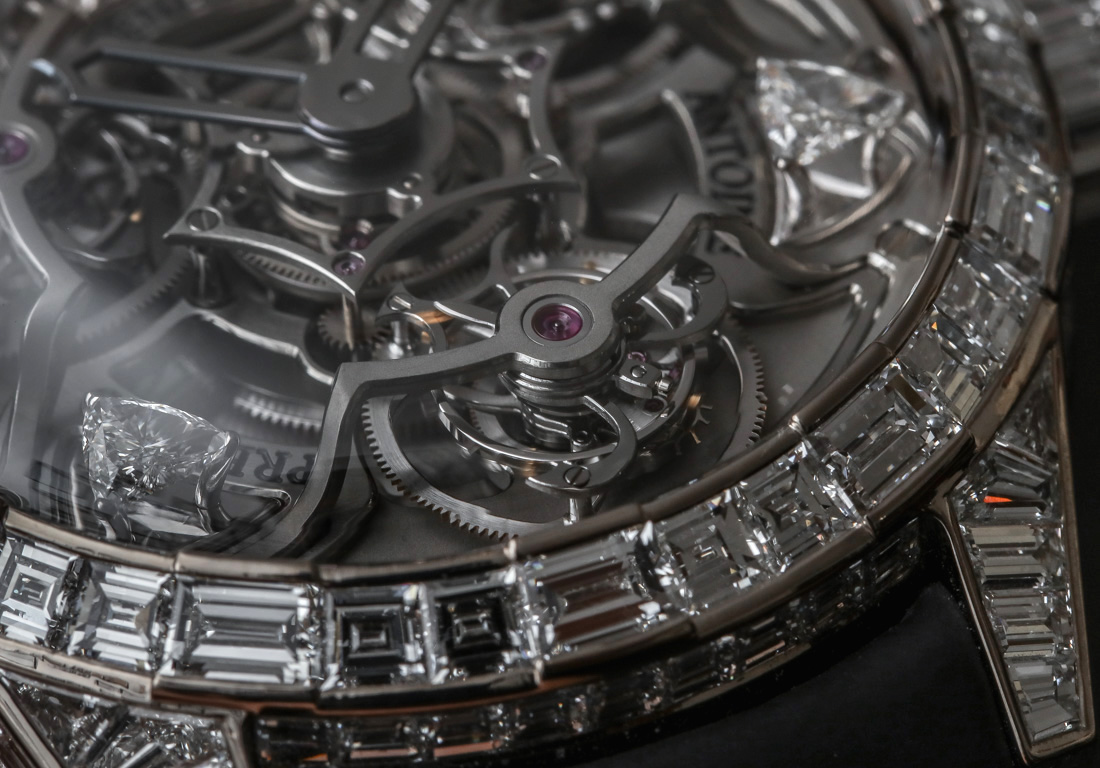 Let’s get back to the movement because it is clearly why a serious watch lover would be interested in the Trillion Tourbillon of Tourbillons timepiece in the first place. Antoine Preziuso is one of the “old guard” master watchmakers who helped the modern watch trend get started in the 1990s and 2000s. His avant-garde style and disregard for design customs earned him and his team both praise and controversy over the years. 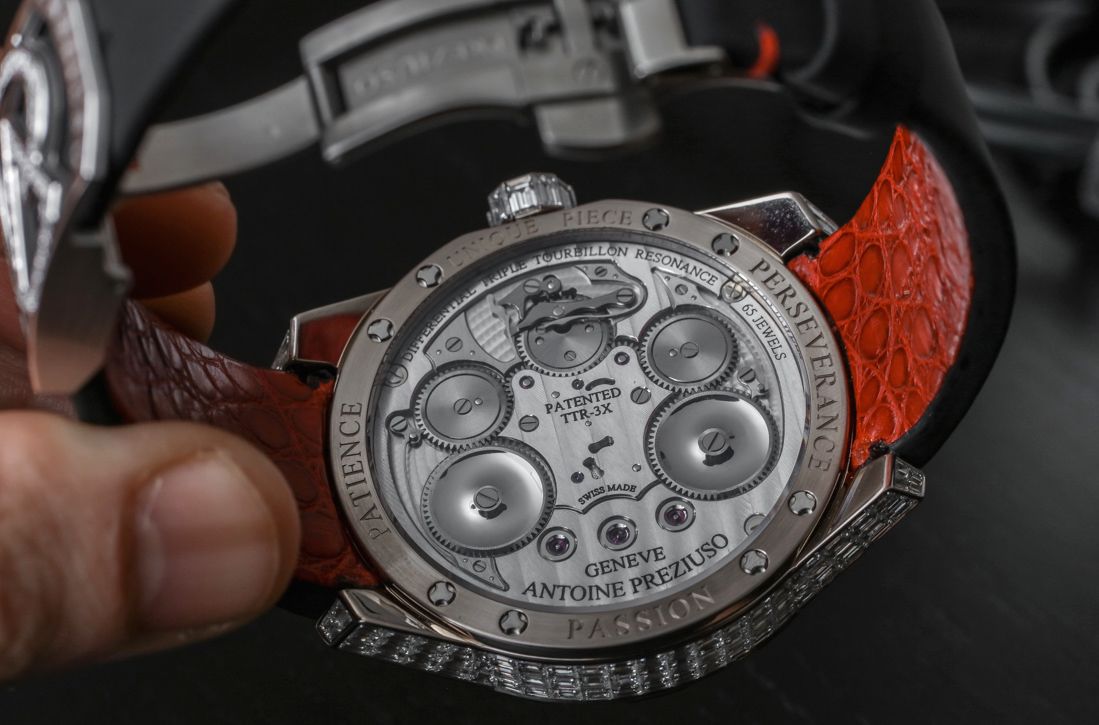 The movement inside the Trillion Tourbillon of Tourbillons is the in-house made caliber AFP-TTR-3x manually wound mechanical movement with 48 hours of power reserve and three tourbillons each running at a frequency of 3Hz (21,600 bph). No specific accuracy claim is mentioned, but this the same movement in the Chronometer Tourbillon of Tourbillons, which as the name implies, has a COSC Chronometer rating. The movement is made up of 570 parts and is complex not only because of how it works but because it also serves as a reliable time teller.

The movement has two mainsprings coupled in series to offer the power, which I have a feeling is probably intense. To get not only three one-minute tourbillons to operate but also to turn the entire dial once evert 10 minutes no doubt requires significant force. That means even though 48 hours of power reserve doesn’t seem like an extravagant amount, I have a feeling that in a “normal” mechanical watch, the mainspring power would offer many days of operational energy. 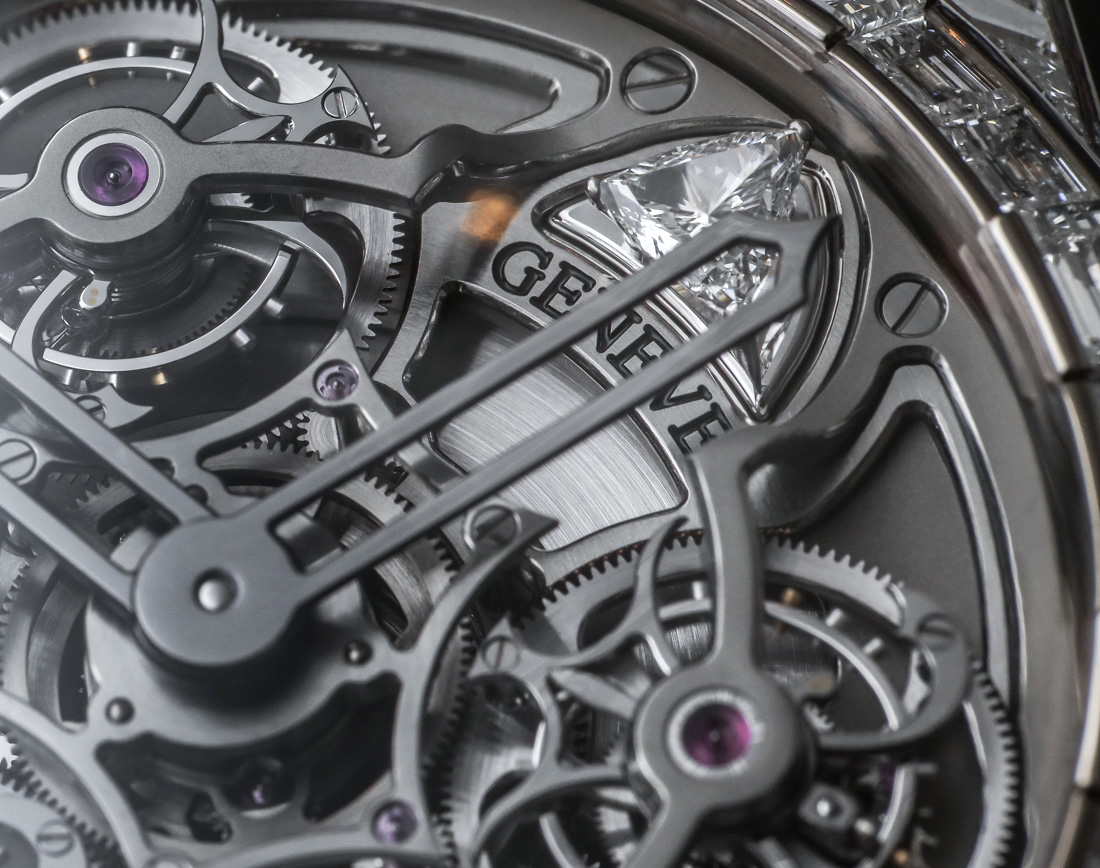 Each of the tourbillons is connected to the main great train via a complicated “planetary triple-differential gear.” The idea is that the rate results of each of the regulation organs (the tourbillons which are escapements that spin on their own) are averaged out. Antoine Preziuso calls this “tourbillon resonance” on the movement but I don’t think this is the correct use of “resonance” at least in reference to horology. Theoretically these coupled tourbillons should further increase accuracy assuming the movement itself is properly regulated and adjusted. Antoine Preziuso further reminds us that the movement contains three international patents in regard to its operation and construction. 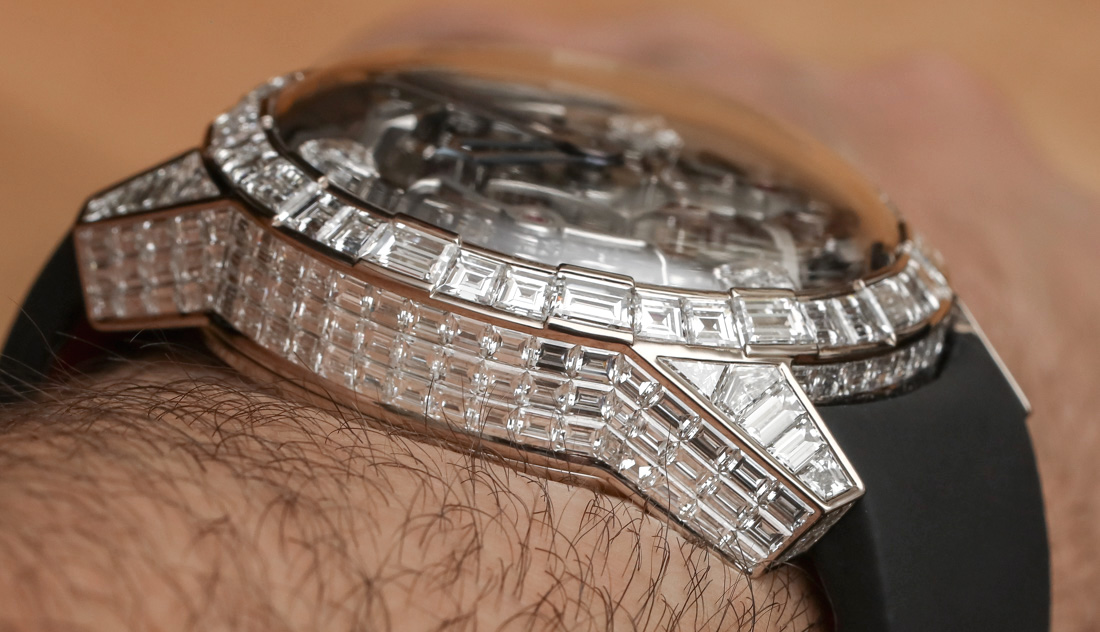 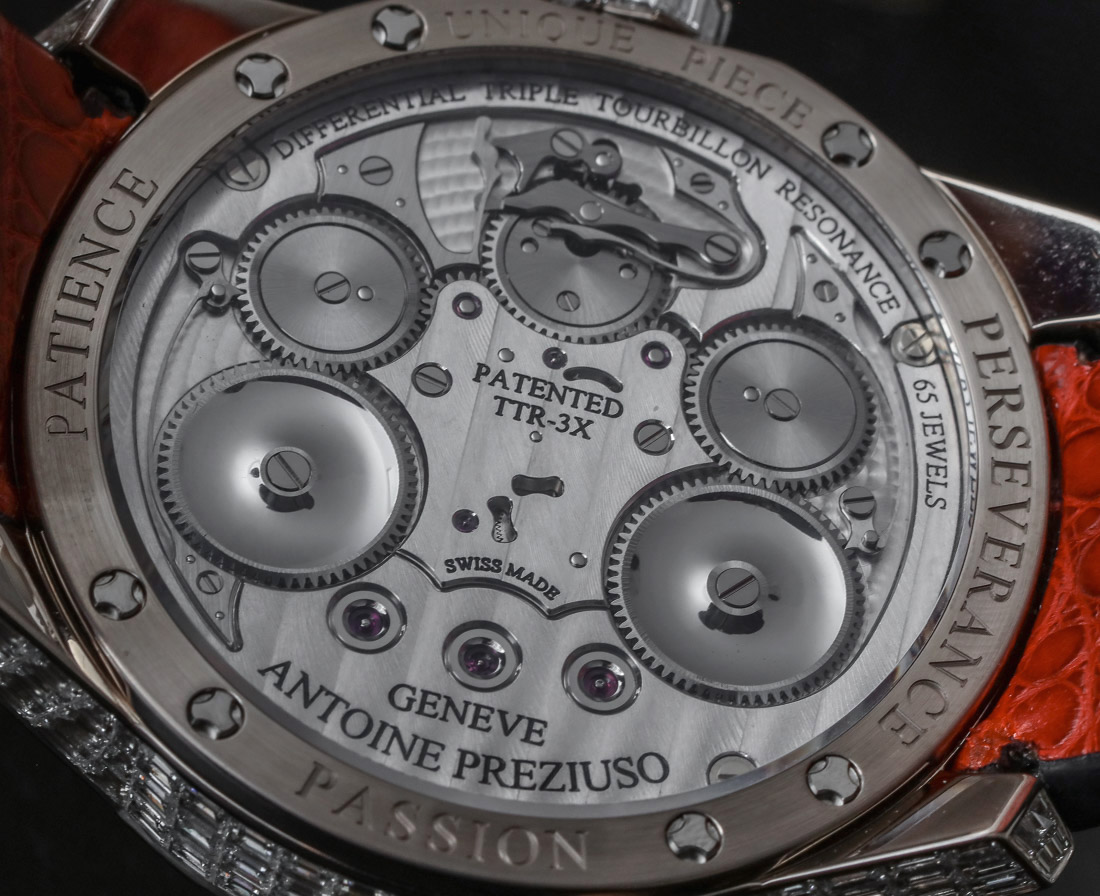 To hold the watch together the case is fitted with eight high-tension titanium screws which connect from the bezel to the caseback. On the rear of the watch you can see the movement displayed through the sapphire crystal window. What I appreciate most is that Antoine Preziuso didn’t quit with the dial-side of the movement in terms of attractive design or finishing. The movement back is not only mostly symmetrical, but also displays a host of polishing and finishing surfaces which are a delight to admire.

The words “passion, patience, and perseverance” are engraved on the back of the watch as well. I normally wouldn’t remark on “brand terms” put onto a watch, but in this case I found the statement to be uniquely telling of the qualities any serious independent watchmaker (or any creative person for that matter) must endure and embody in order to produce results such as the Trillion Tourbillon of Tourbillons watch. 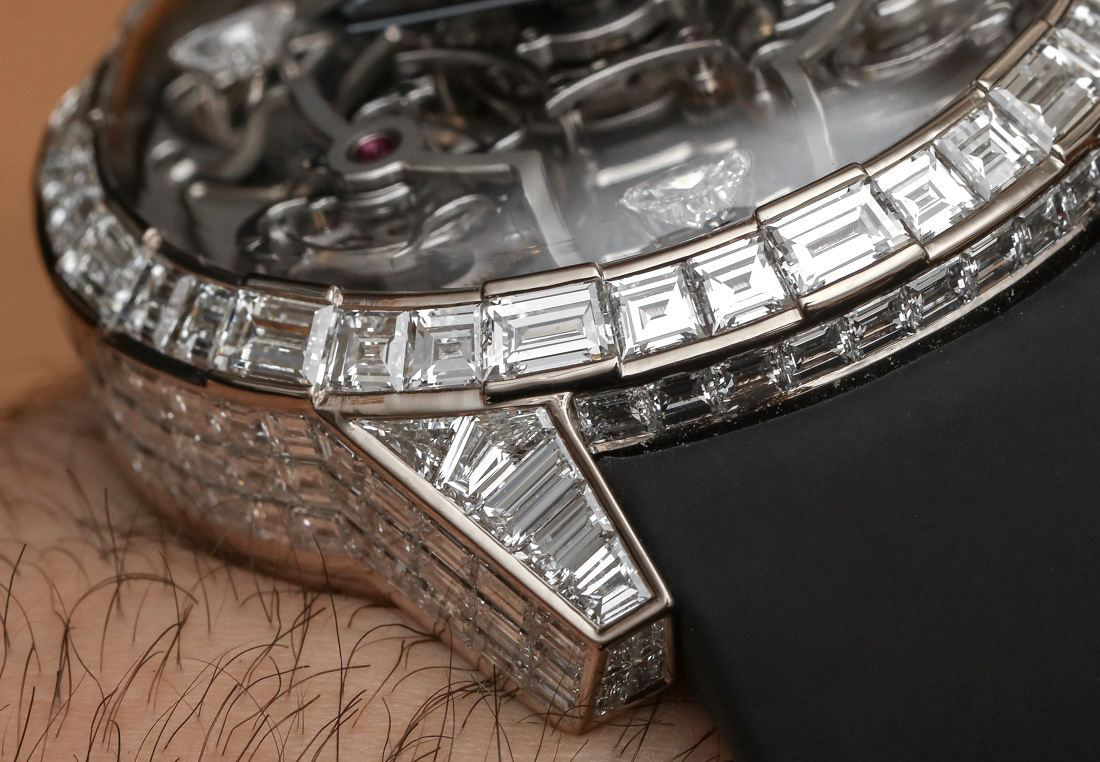 The Antoine Preziuso Trillion Tourbillon of Tourbillons is an interesting watch because it both appeals to lovers of exotic mechanical executions as well as status-seekers who admire materials such as diamonds. While there are other products like this out there (I mean, not exactly like this) most luxury watches at this level either focus on mechanics or densely assorted luxury materials – and not often both. 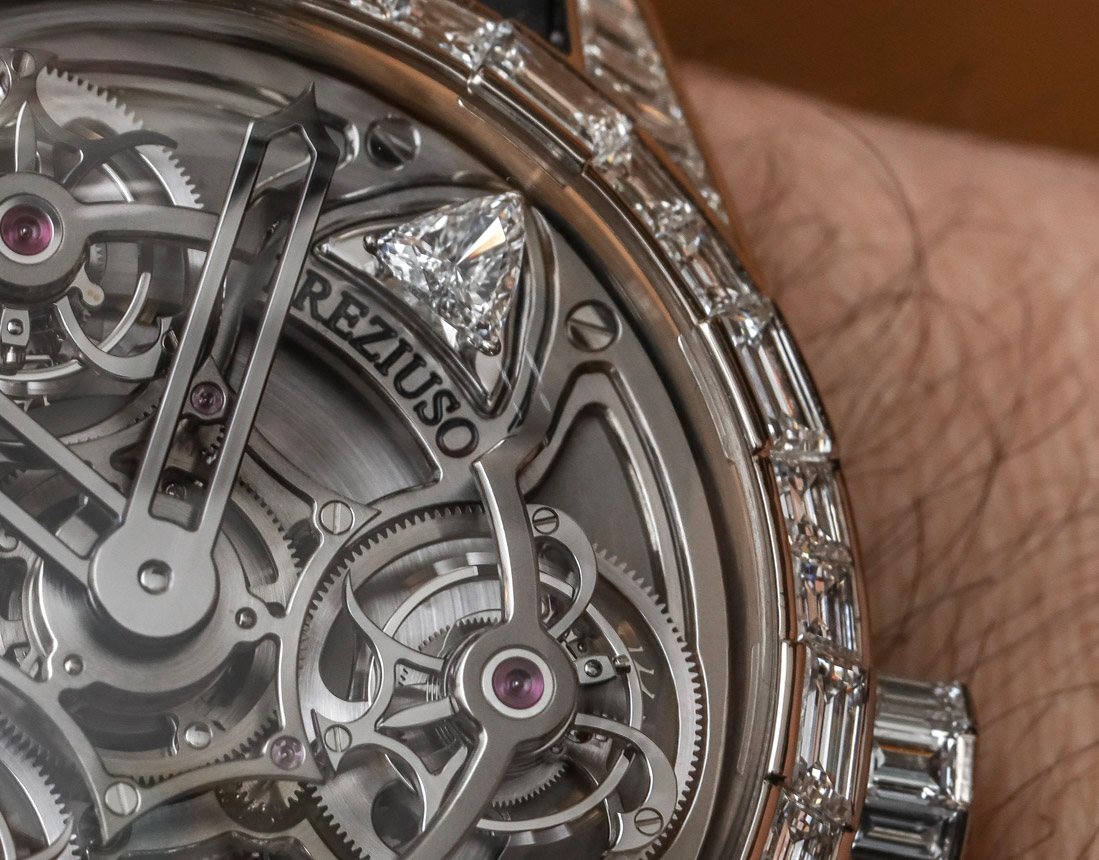 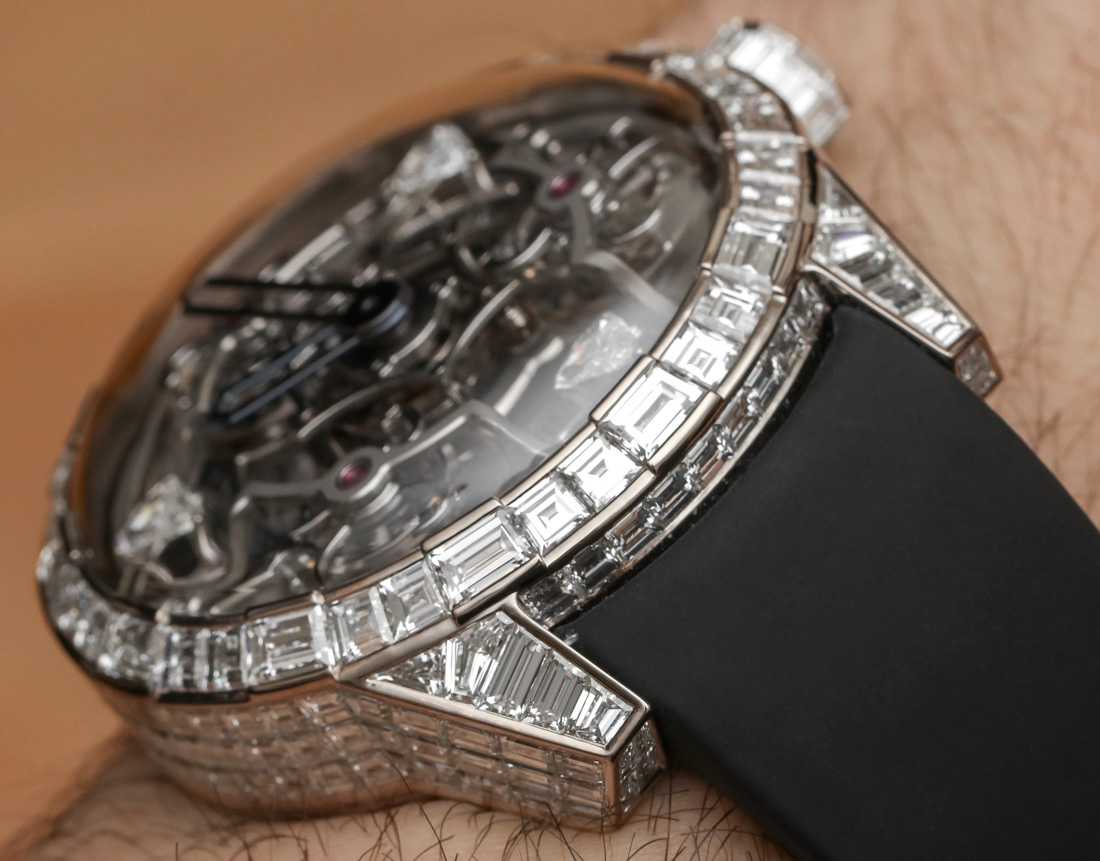 My only complaint is related to the hands on the dial which are nicely sized but don’t contrast enough to be legible. I am not sure anyone planning on getting this timepiece is concerned about that, but I think with just a bit more contrast, this luxury item will shout “watch” just a bit more and less “wild luxury mechanism for the wrist,” which I think will help it further appeal to horological purists. In any event, this is a truly amazing product and in all likelihood these pictures are the only place you, my dear reader, will ever see a glimpse of such a timepiece. Price for the Antoine Preziuso Trillion Tourbillon of Tourbillons watch is 1,200,000 CHF. antoine-preziuso.com