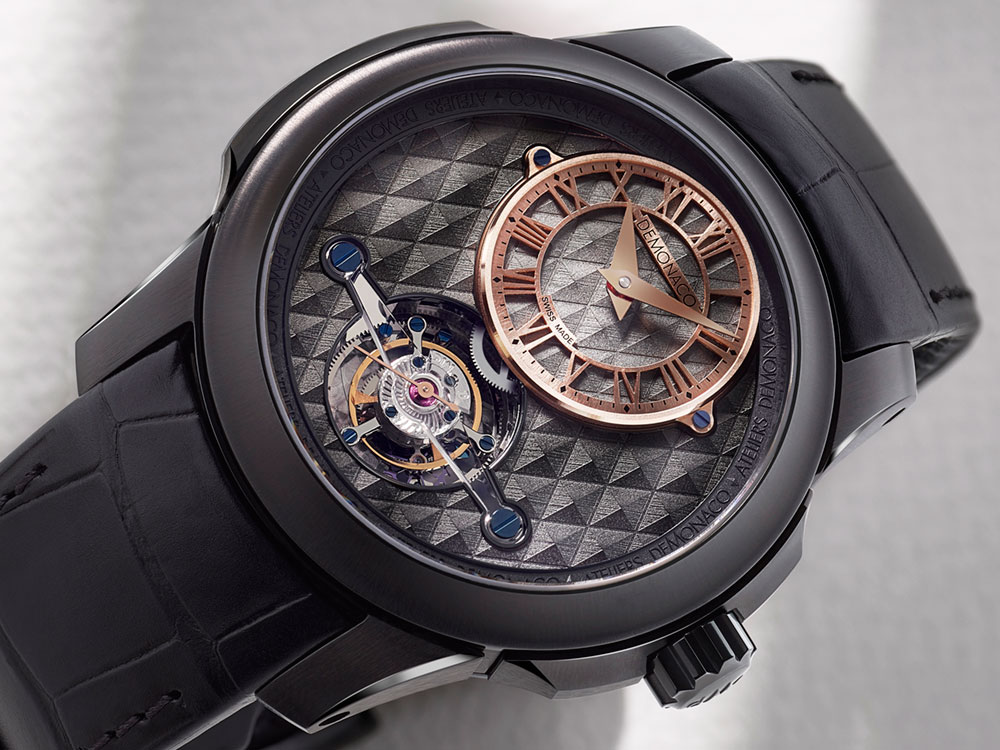 Ateliers DeMonaco is the designated haute horlogerie arm of the Frederique Constant group. With a selection of watches ranging from tourbillons to chronographs, it is one of the few brands that can claim to be awarded the prestigious and demanding Geneva Seal – as further discussed in our coverage of the brand’s Poinçon de Genéve Saphir watches. Recently, the brand introduced the Ateliers DeMonaco Tourbillon Oculus 1927 Titane watches – two new variants to an existing line – this time with a sportier touch, thanks to a black titanium case. Ariel spent some hands-on time with an earlier version of the Tourbillon Oculus, the “Xtreme Precision,” and you can learn more details about it in that article. The most immediately apparent change is to the texture of the dial, as the Ateliers DeMonaco Tourbillon Oculus 1297 now has a pattern of repeating “lozenges” in relief. The brand says that this was inspired by the coat of arms of Monaco, where there is a shield with a similar pattern in red and white. The dial is dark grey in color, and you would be forgiven for thinking at first glance that the texture is reminiscent of a faux carbon fiber weave. However, the lack of the carbon fiber sheen and the three-dimensional nature of the relief dispels that notion fairly quickly. The brand says that the dial is prepared using a new technique. A five-axis laser now engraves the dial allowing for a precise, repetitive pattern on such a small scale. It is a fairly simple dial, with a tourbillon opening at 6:00 and a small dial at the top which indicates the hours and minutes. The one-minute tourbillon has a seconds hand attached to it, though I personally think it would look much better without it. The seconds hand isn’t particularly useful to tell the time exactly and only gets in the way of appreciating the tourbillon. The difference in the two variants launched is in the color of the sub-dial at the top. Ateliers DeMonaco doesn’t specify the material but at this price point, I would think that the dials are made of something like rose gold and white gold. Given the monochromatic color scheme of the rest of the watch, I think the white gold version is the better of the two. The hands are dauphine shaped and there are Roman numeral hour markers that are formed by open-working the dial. It is held in place over the grey base dial with the help of two blued screws. The case for the Ateliers DeMonaco Tourbillon Oculus 1297 Titane watches is, as mentioned earlier, made from titanium with a black DLC treatment. At 44mm wide by 13.1mm thick, this is not a small watch, but it should wear fairly comfortably thanks to titanium’s lightweight properties. The bezel, case band, and lugs have various finishes – with a good mix of brushing and polishing, all of which is done by hand. The sapphire crystals, both front and back, have double AR coating. Despite its many benefits, it’s surprising to see how many high-end watches still don’t offer anti-reflective coating (I’m looking at you, Patek). The real highlight of this watch is the movement, the Tourbillon XP1, which Ariel discusses in his article linked to above. Ateliers DeMonaco dubs this tourbillon the “eXtreme Precision 1 minute” tourbillon (complete with inconsistent use of uppercase letters) and says it offers an accuracy of +/- 2 seconds per day, which is not as common or as easy to achieve with a tourbillon as may be assumed. A neat touch for the tourbillon is the use of a sapphire bridge on the front, which gives the wearer a more unhindered view of the entire assembly. As expected at this price level, all decoration on the movement is applied by hand. There’s oodles of anglage and the 22k gold rotor is hand-engraved with the crown of Monaco. The movement also has a silicon escape wheel and lever, and offers a 42-hour power reserve. I should note at this point, that this is the brand’s most affordable tourbillon to date and the focus is more on the accuracy of timekeeping than the overall complexity of design and finish – not that the finish seems compromised in anyway. As a boutique brand with low production volumes, new releases are usually few and far between for the brand and there is some degree of customization available to customers, such as having their watches outfitted with precious jewels. The Ateliers DeMonaco Tourbillon Oculus 1297 Titane watches are limited to 88 pieces each and ship with an alligator strap on a titanium deployant for a price of $61,100. ateliers-demonaco.com