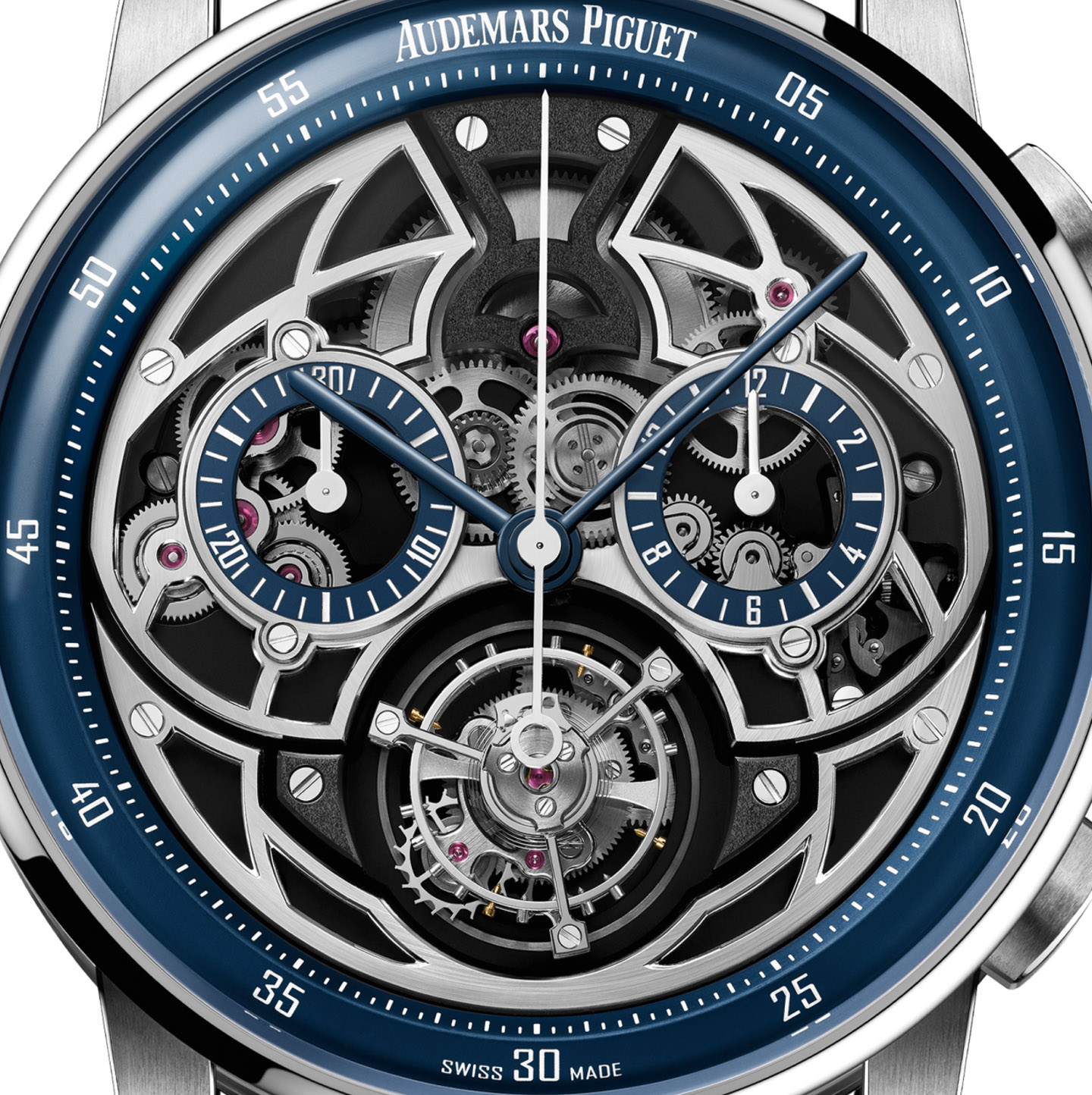 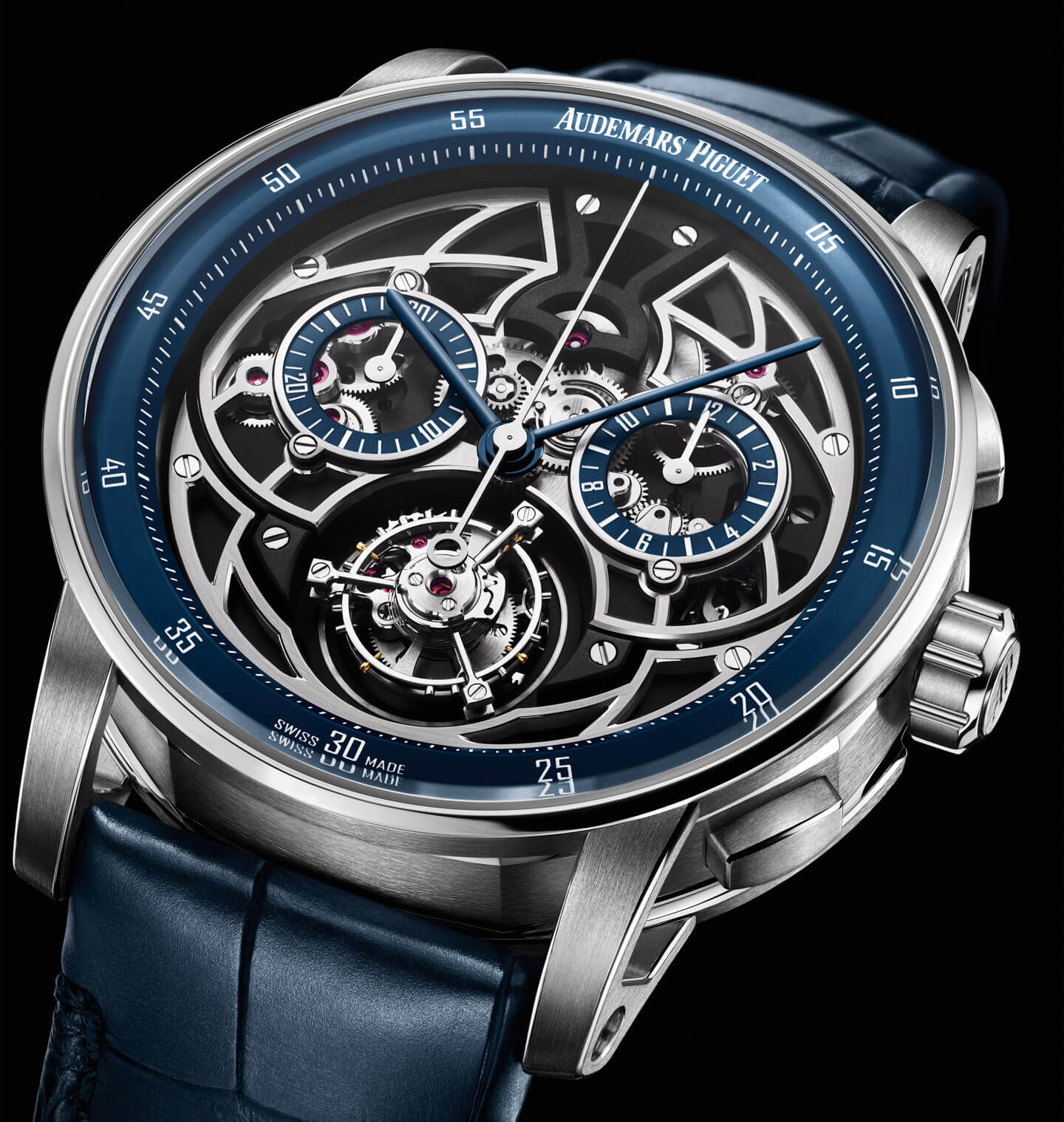 For 2020, Swiss Audemars Piguet has spent a lot of time tweaking and adding to its still-fresh Code 11.59 family of watches. This newest Code 11.59 Selfwinding Flying Tourbillon Chronograph (reference 26399BC.OO.D321CR.01) watch debuted today is a highly exclusive limited edition that focuses on using the Code 11.59 case to promote an elegantly handcrafted, complex haute horology movement. For years, Audemars Piguet was urged by fans to diversify its appeal away from the Royal Oak collection. In a move to appeal to younger buyers who grew up in a novel world, the Code 11.59 family is Audemars Piguet area in which to experiment and play — which the brand has always done marvelously when price isn’t a limitation.

The Code 11.59 case for this model is 41mm wide (water resistant to 30 meters) produced in 18k white gold. The case as always is very nicely finished – and openworked around the lugs – with mostly brushed surfaces that are enhanced by carefully polished angles. This same aesthetic concept has been adopted onto the movement, which according to Audemars Piguet has over 100 hands-polished surfaces. While not technically part of the watch’s title, the in-house made caliber 2952 automatic movement is “Openworked” (Audemars Piguet’s preferred way of saying “skeletonized”) in a manner which creates an eye-pleasing symmetrical dial motif. 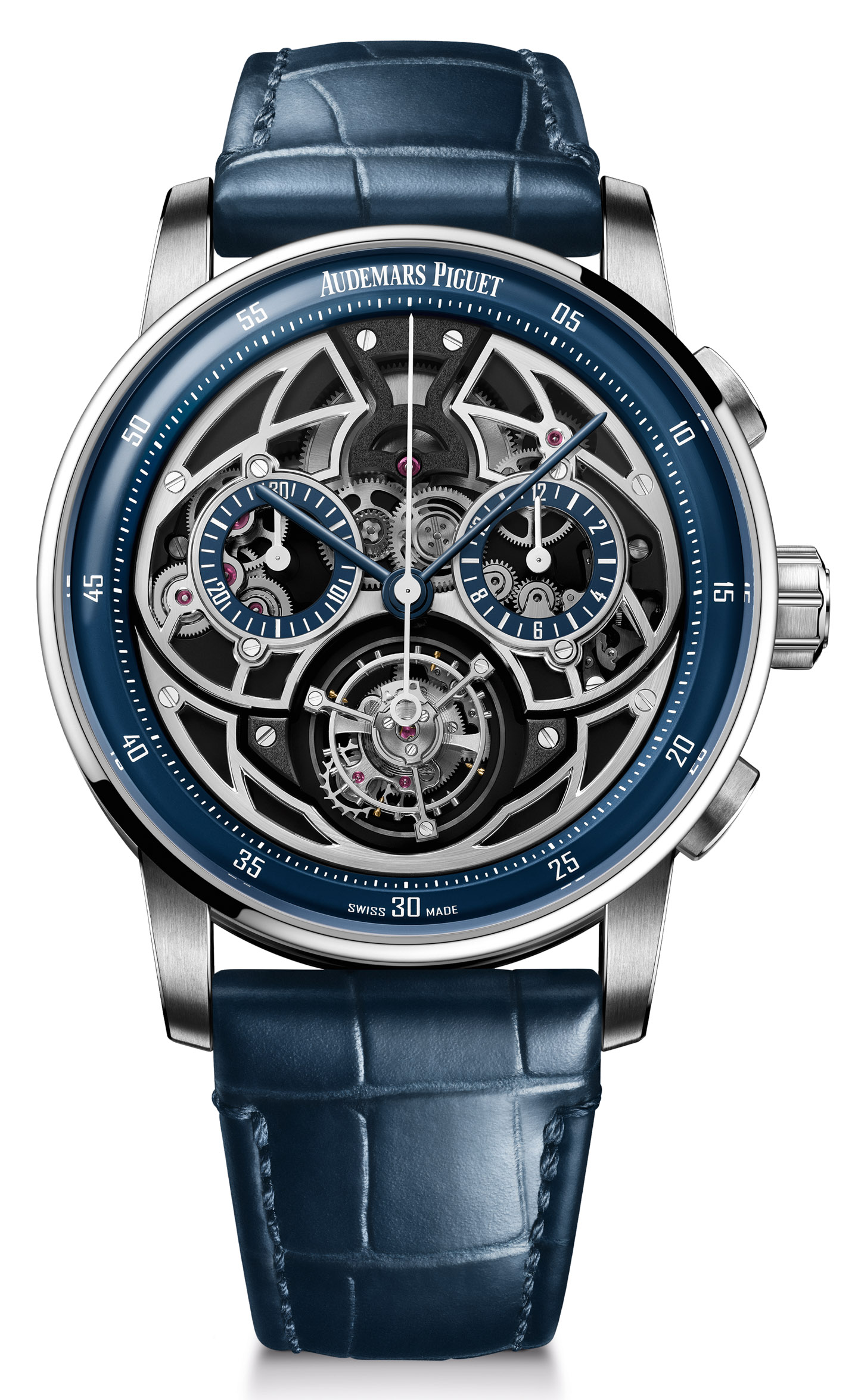 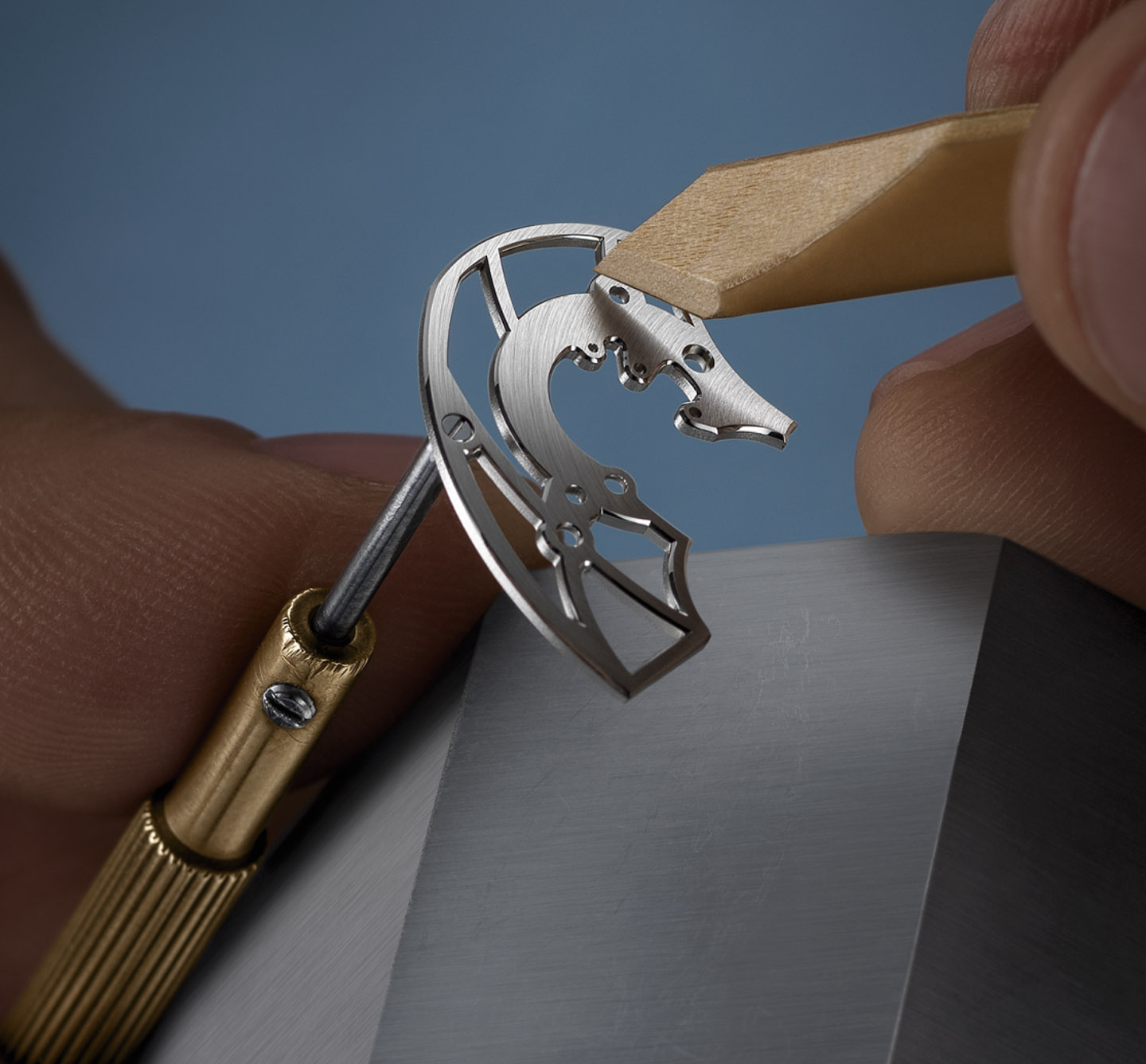 The movement is produced from 479 distinct parts and operates at 3Hz with 65 hours of power reserve. The automatic (self-winding) movement offers the time, a 30-minute chronograph with a flyback complication (a first in a tourbillon movement from the brand) as a flying tourbillon positioned above 6 o’clock. Until now there have been Code 11.59 Tourbillon watches, andCode 11.59 Chronograph watches, but no other Tourbillon Chronograph watches like the novel reference 26399BC.OO.D321CR.01.

Royal blue lacquer color is used to decorate the dial’s flange ring as well as the flange rings on the chronograph subdials. Blue is still a very popular color in watchmaking, which allows this first version of the Code 11.59 Selfwinding Flying Tourbillon Chronograph to be fashionably trendy. I anticipate that Audemars Piguet will render this same case, dial, and movement combination in additional gold or precious metal cases, and with different dial colors. Legibility might be a challenge given the blue hands on an open dial can be tough to spot in some lighting conditions (and come to think of it, the hands could have been a tad bit longer), though at least the flange ring has complete minute and hour markers. 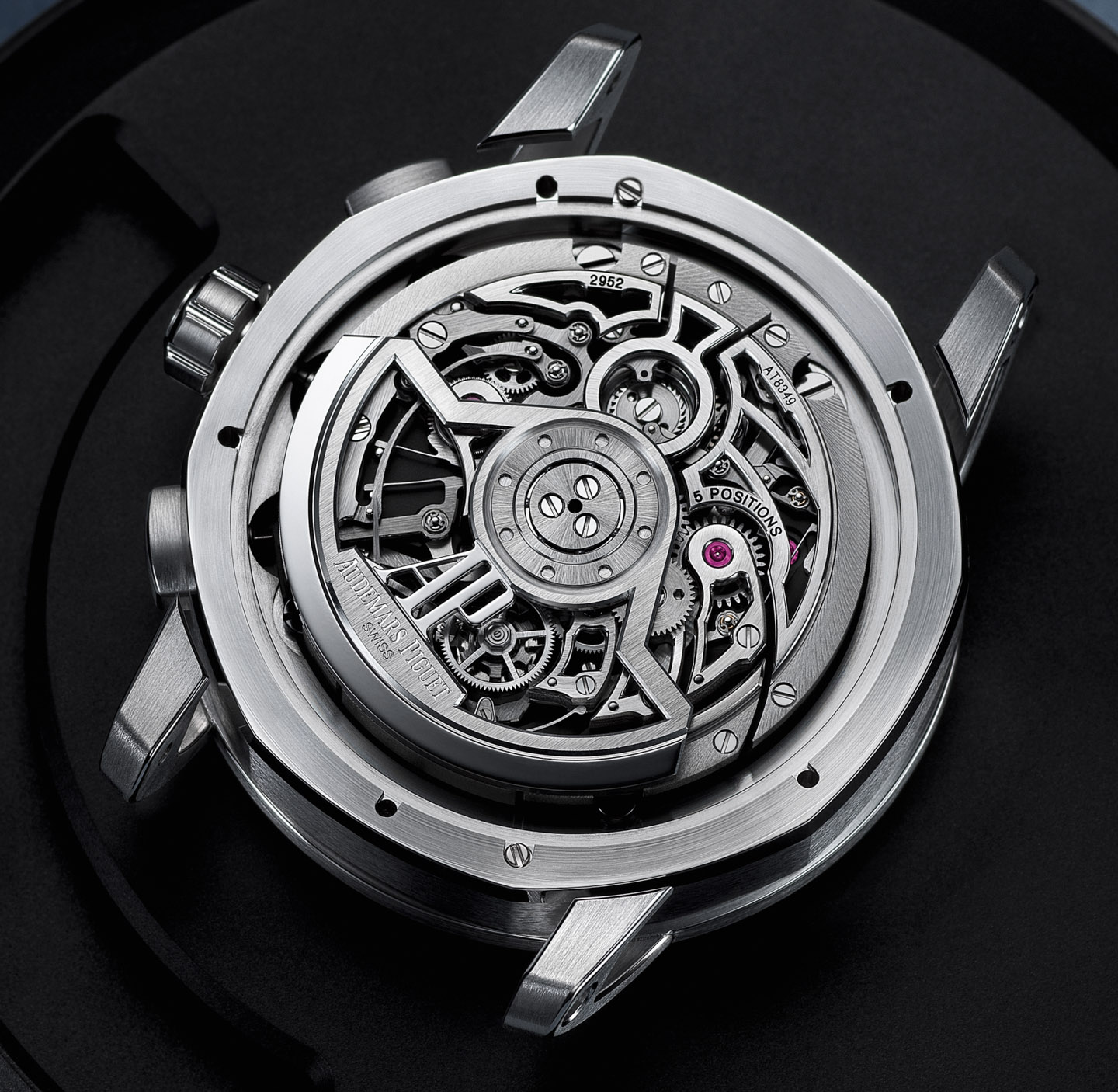 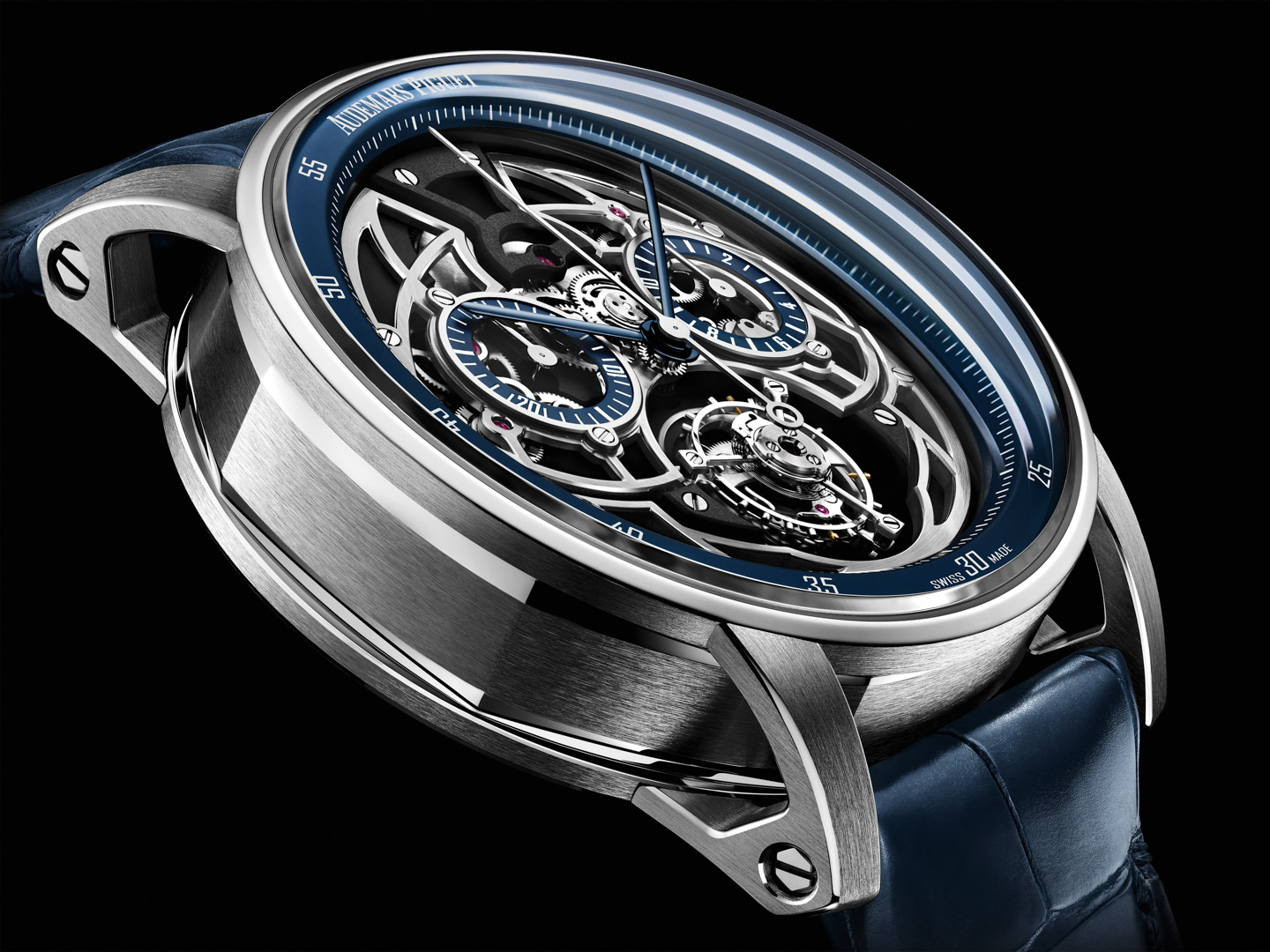 People who try on a Code 11.59 watch case tend to like it — and I do, too. Audemars Piguet has been prolific with the dial treatments this new collection is getting and has been mostly succeeding with its ultra-high-end models such as this Openworked Tourbillon Chronograph. The brand’s most elite collectors are getting the nicest of the Code 11.59 products for the time being, which probably suits them just fine. I’m looking forward to playing with one of these myself soon (the movement geek in me wants to experience the flyback chronograph on a tourbillon). Price for the Audemars Piguet Code 11.59 Selfwinding Flying Tourbillon Chronograph reference 26399BC.OO.D321CR.01 watch is 240,000 Swiss Francs. Learn more at the Audemars Piguet website here.