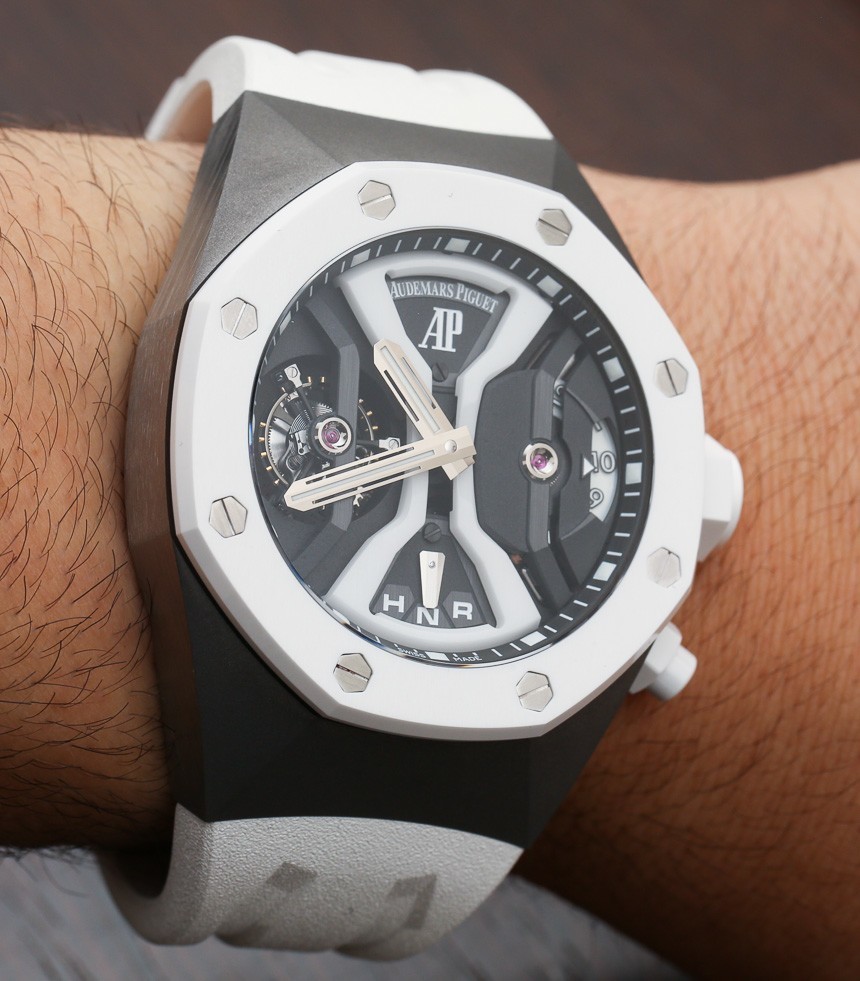 In my opinion the now 12-year-old Audemars Piguet Royal Oak Concept GMT Tourbillon design is still one of the brand’s coolest high-end sport watches to date. It mixes haute horology, modern design, and the appeal of a sport watch in a unique way that is difficult to beat. It isn’t the ultra luxury watch for everyone, but there is a refined urban sensibility to it that takes it out of the private watch nerd den and into the real world. This particular version of the Royal Oak Concept GMT Tourbillon is new for 2014 and we originally debuted it here.

Even though we have already discussed the ins and outs of this watch I think a hands-on look offers a distinct take on this modern luxury watch. When Audemars Piguet released it originally, it was for the 30th anniversary of the Royal Oak watch in 2002. The idea was to present an evolved take on the classic. The 2002 version looked very different than the 2014 model. In fact, it was in 2011 when the Audemars Piguet Royal Oak Concept CS1 Tourbillon GMT watch was released did this new style debut.

Since the 2011 model, the design has included a new take on the classic. The iconic bezel was retained almost in perfect form, but the case was seemingly carved by a katana for a more contemporary look. In high-grade titanium you can easily see how interesting the form of this watch can be. Ceramic was used for the first time, and it really simplified a very wild theme Audemars Piguet began with the first two Royal Oak Concept watches. It even lost some indicators along the way, such as the power reserve indicator. 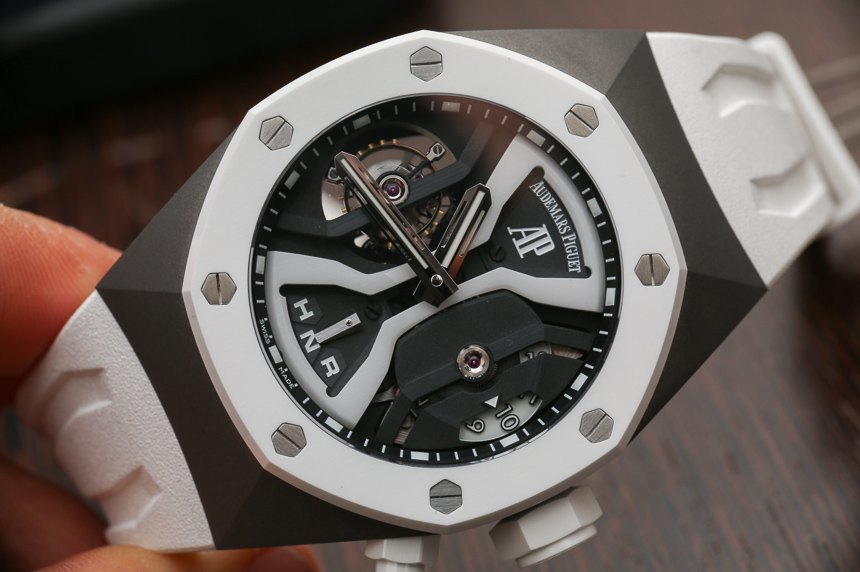 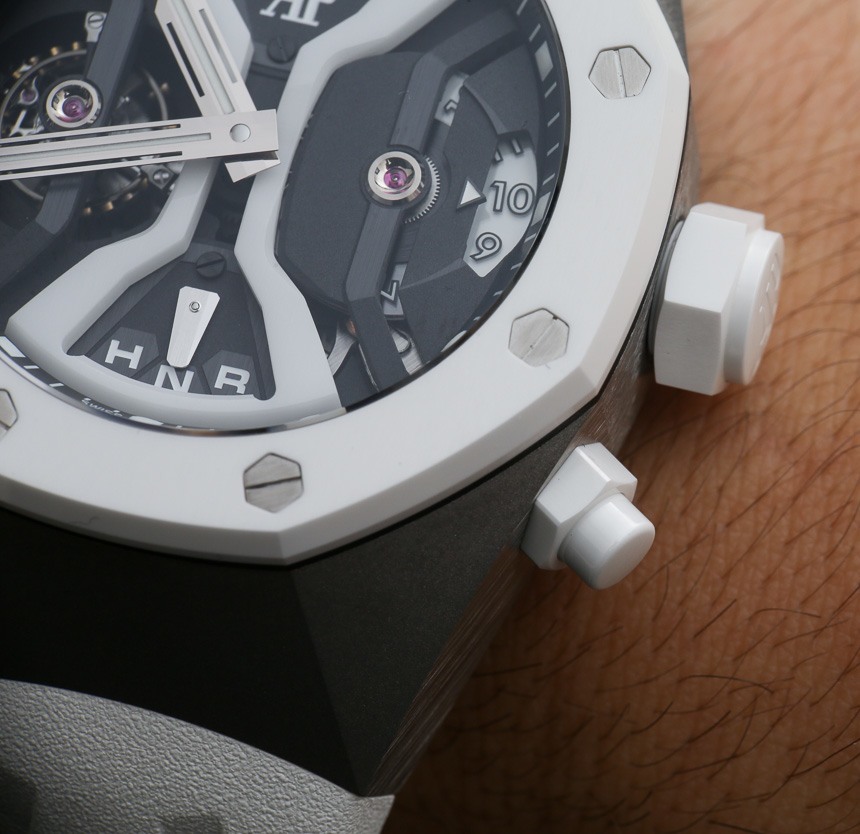 For 2014, Audemars Piguet decided to release a new limited edition version of the Royal Oak Concept GMT Tourbillon in white and titanium. This went with two other white watches that included the Royal Oak Offshore Diver in white ceramic, and a new white version of the Royal Oak Offshore Chronograph 44mm. With three new white watches for 2014 you could call it a trend over at AP. Given their efforts in markets such as Miami and other parts of the world were white-colored watches work well, that isn’t at all surprising to me. As someone who happens to like white watches I particularly enjoy the result.

At 44mm wide and tall (at just over 16mm thick), the Royal Oak Concept is a large case. One complaint people have about white ceramic is that it can look like plastic. I don’t really think that is the case here. Most of the case is in finely cut titanium, while white ceramic is used for the bezel, crown, pusher, and “hourglass-shaped’ element on the dial. It is so finely architected and crisp that it really doesn’t look like plastic, but rather a much harder and more rigid material–which it is. As you can see, the very long lug structure has the watch look large on most small or medium wrists. It is comfortable, but if you prefer your watch not to look like it is coming off your wrist then it would be best to test wearing this first. 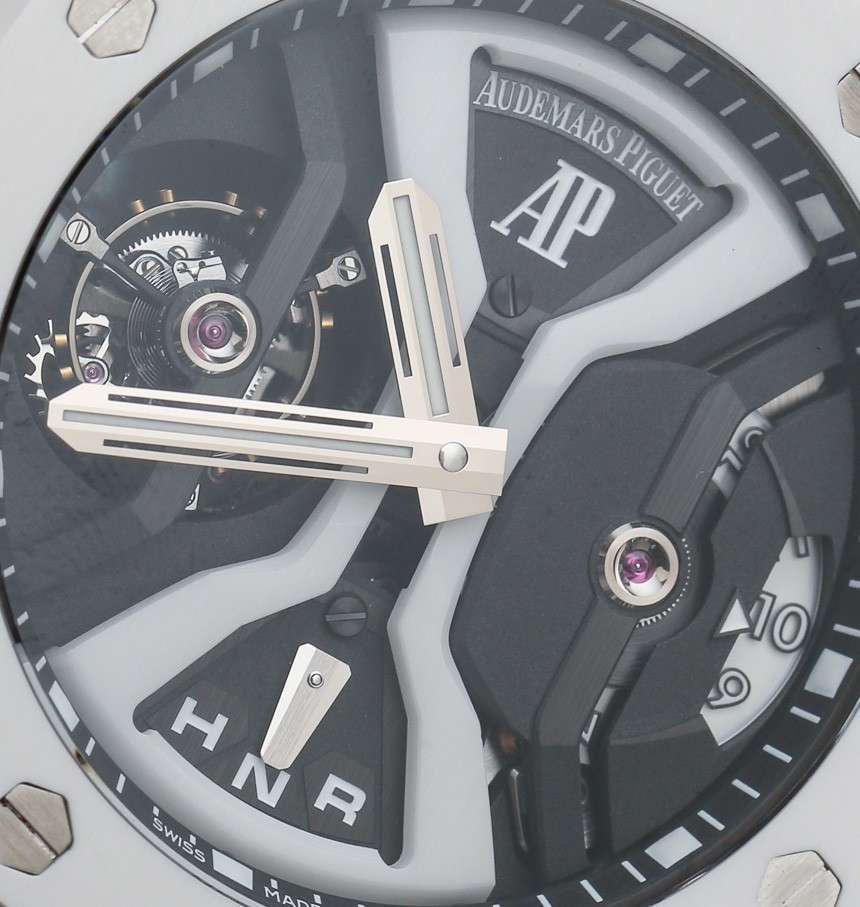