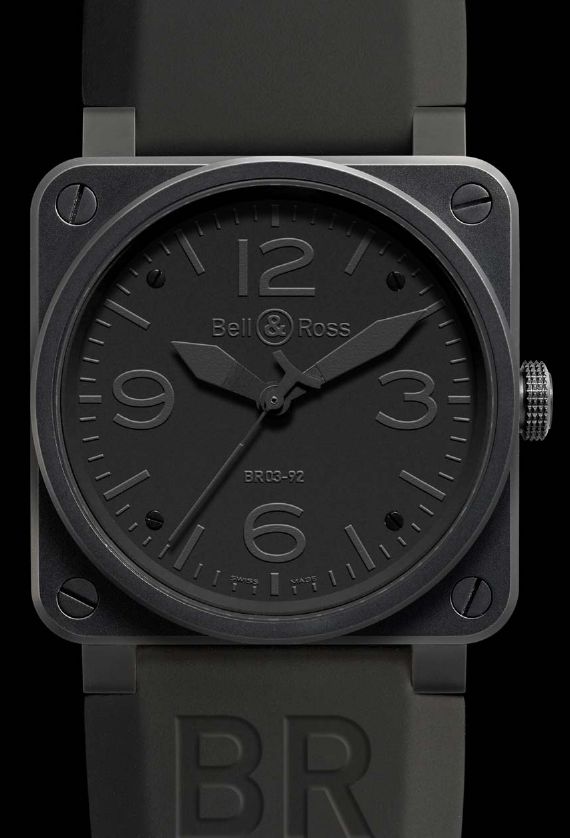 Bell & Ross was one of the original companies to offer an all-black watch. The BR-01 Phantom was offered as a limited edition of 500 pieces of the basic model and 500 of the chronograph. The Phantom attracted a lot of attention and both models sold out faster then any other color BRs offered by the manufacturer. The BR-03 Phantom picks up where its BR-01 big brother left off. It has a limited production run of 500 pieces per year, and promises to be quite a popular watch. We still have not been able to have one of theses watches in our showcases. Each one we received had been ordered in advance. It is easy to see why. The Phantom dial is striking.

The dial on the BR-03 92 Phantom is surprisingly easy to read. The painted hour markers are thick and wide, therefore raised over the dial. They consist of a healthy dose of black photo-luminescent paint, which makes the watch even easier to read when the lights are turned off. I have found in similar watches from other companies that the black markers take longer to “charge” then light colored ones. This means that if you do not hold the watch directly under a light source for five minutes it does not glow in the dark very well. The BR Phantom dials, on the other hand, have a strong, green glow even after regular wear during the day.

The case of the BR-03s, as probably most Bell & Ross enthusiasts already know, is a 42mm square. Very few people have tried on a BR-03 and found it to be too large on their wrists. As can be imagined, this is not the case for the 46mm BR-01 watches. This is probably the main reason why the BR-03s were introduced in the first place. The case is bulky, but still pretty low profile with a thickness just under 10mm. The lugs are slightly curved allowing the strap to fit more snugly on the wrist. All around the BR-03 92 is a very comfortable watch, and thanks to its “genuine military specifications” is perfect for every day use either at the office or at the beach.

All-black is the new black. Bell & Ross was a pioneer in this respect, and helped make the low-contrast style as popular as it is today.

Pictures: Close up of the fabulous Phantom dial and the BR-01-92 Phantom on the Bell & Ross vinyl and Velcro strap.