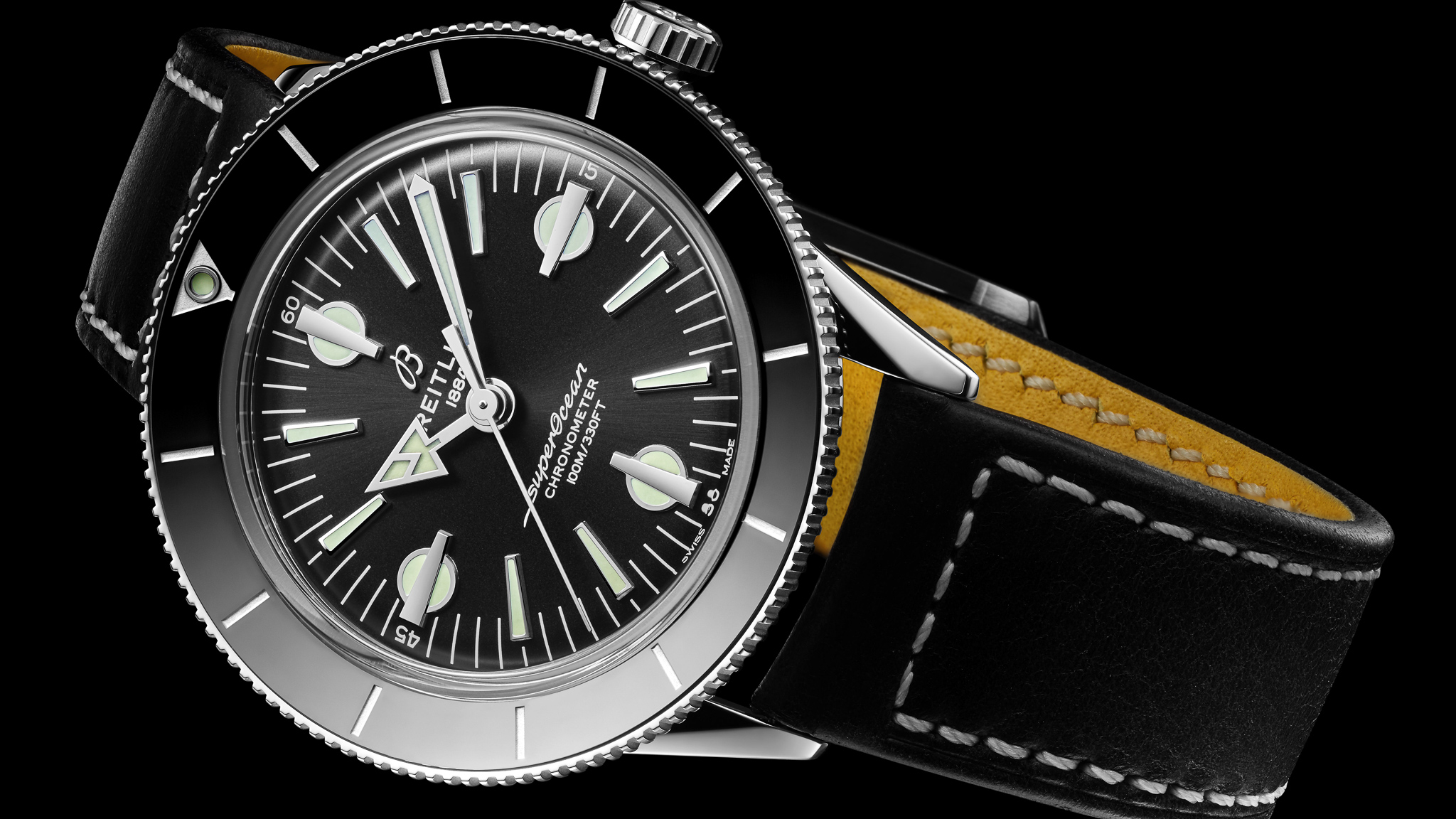 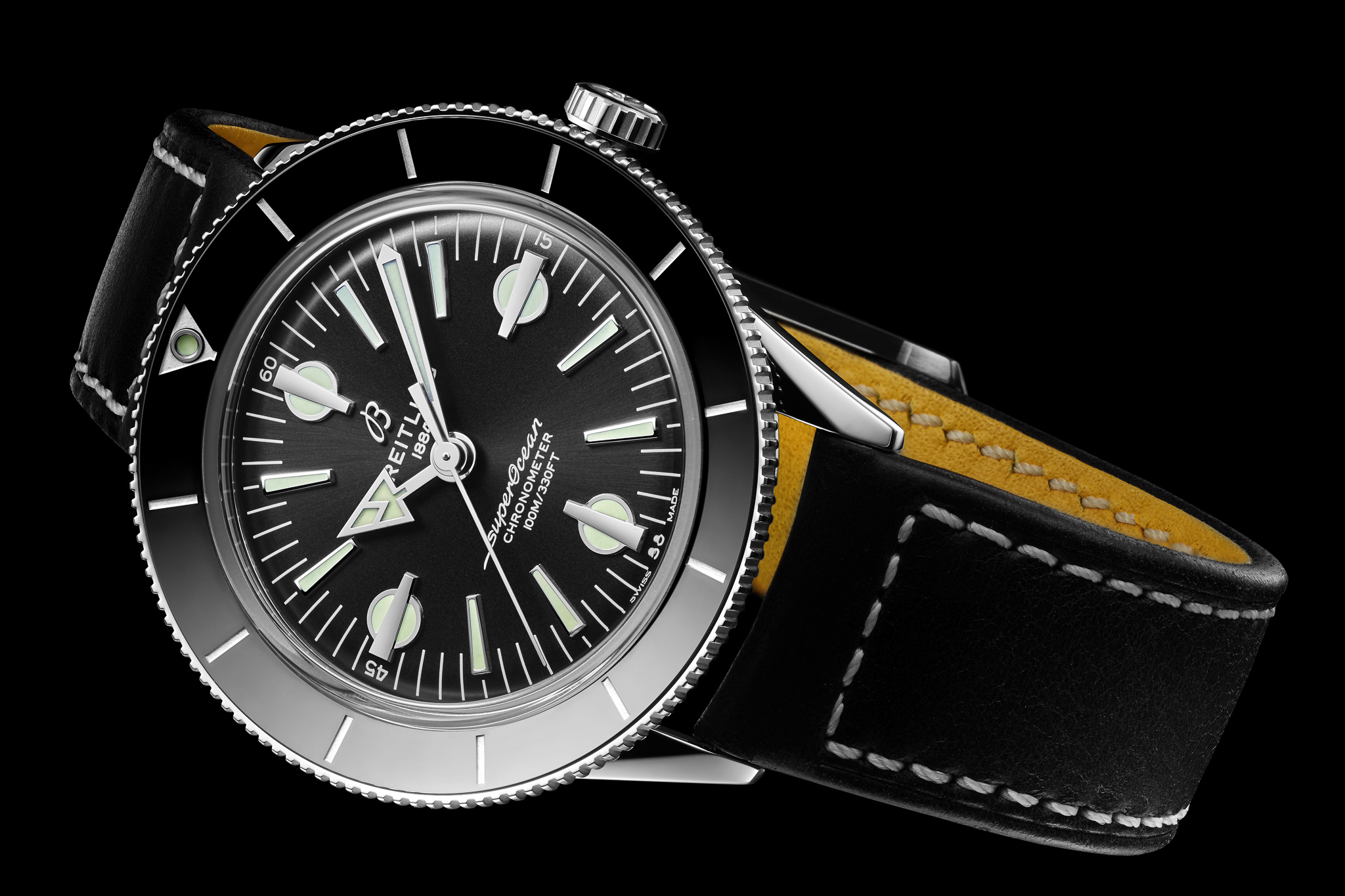 There weren’t any watches of note being worn in Bruce Brown’s seminal surf opus Endless Summer from 1966, but had there been, a Breitling Superocean of that era certainly seems like it wouldn’t have been out of place, gallivanting around the world in pursuit of the perfect wave. New for 2020, Breitling has introduced a new capsule collection closely resurrecting the aesthetic of its inaugural Superocean from 1957 — a quirky but capable sports watch whose dial was characterized by a segmented hour hand and a quartet of faceted “wedge” markers driven through circular indices. The long-overdue arrival of this particular reference has very much been the subject of a whole lot of speculation, though it’s worth noting that the ’57 edition might not be the Breitling that vintage dive watch purists have been craving — yet.

Under the care of CEO Georges Kern, Breitling has spent the better part of the last three years using unique ambassador events and casual boutique build-outs to express its values as a laid-back coastal lifestyle brand, but it hasn’t really had a physical watch that truly reflected that messaging as closely as this new Superocean capsule does. Until now, the standard-issue 44mm Superocean diver has remained a pure expression of Breitling’s modern tool watch capability, while the Superocean Heritage spin-off has owned a more refined and luxurious “dress diver” aesthetic. Furthermore, both of these core references and their many variants have opted for the big polished cases and bolder design language that has more or less defined the last 20 years of the Breitling “Schneider era.” All that changes with the ’57 edition, which wholly embraces the funky mid-century charm of its source material, when the best sports watches of that era weren’t very large or flashy and certainly didn’t need to dive very deep. 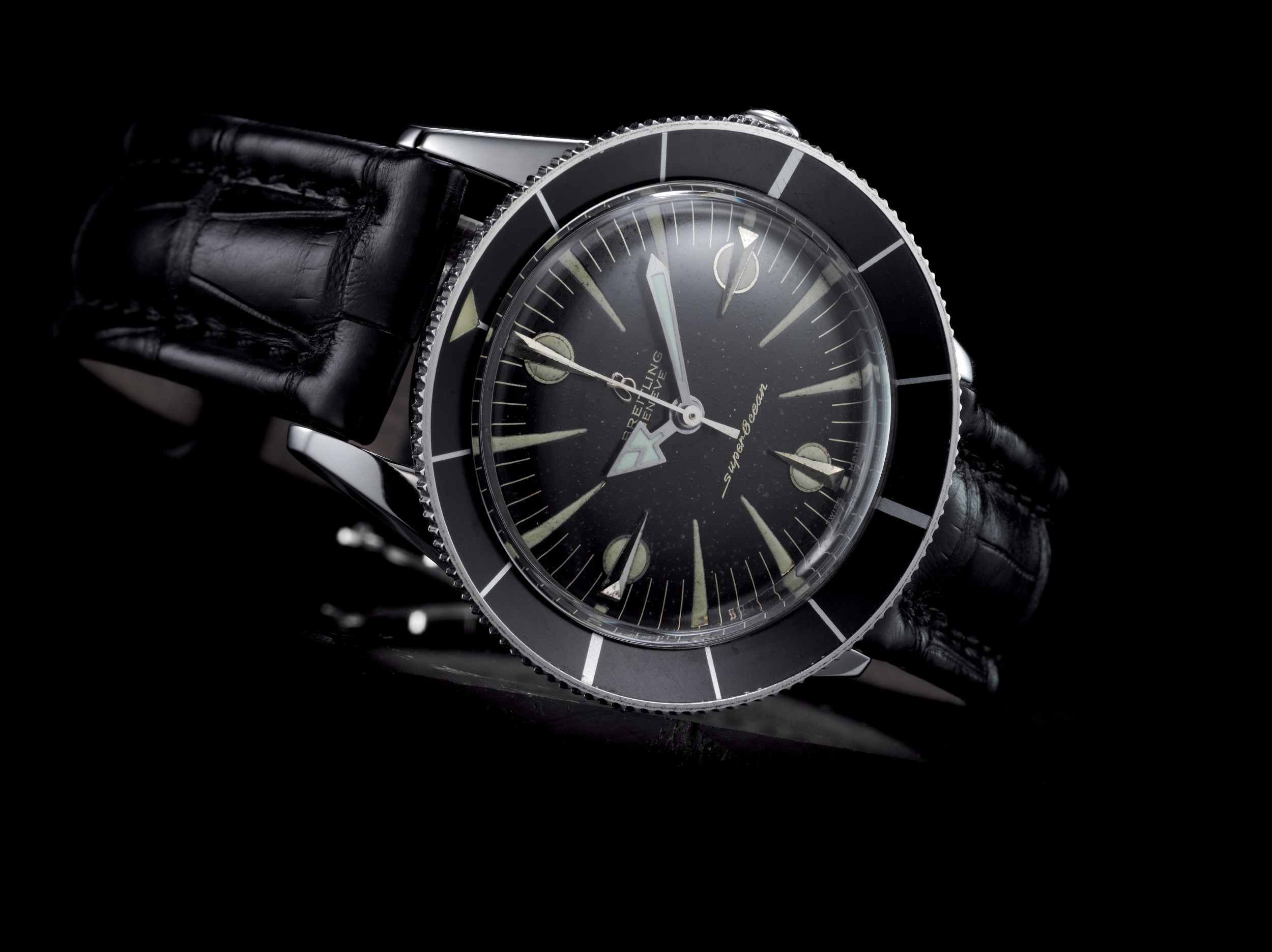 Measuring only 42mm by 9mm thick and carrying a water resistance of 100 meters, the new ’57 Edition Superocean Heritage watches are probably best characterized as “skindivers” — sports watches that don’t bear the traditional hallmarks of a “true” ISO 6425-rated dive watch (a fully indexed timing bezel, luminous running seconds counter, some degree of excess of the standard water resistance, etc.) — but where they lack in purpose-built capability, they more than make up for it in charm and island-vacation readiness.

Adhering to the formula we’ve seen with Breitling’s über-successful vintage pilot watch re-issues like the recent Ref. 765 or “Top Time” editions (both of which were rebooted under the watchful tutelage of vintage Breitling expert Fred Mandelbaum), the ’57 edition marks the first time that Breitling under Kern has dug into its vintage dive watch archive, though it’s extremely unlikely to be the last. Unlike the aforementioned, though, this capsule is more or less considered a line extension, not unlike the Commercial Airlines Navitimer series (TWA, Swiss, Pan Am) released last year, which joined the core Navitimer collection in regular production. 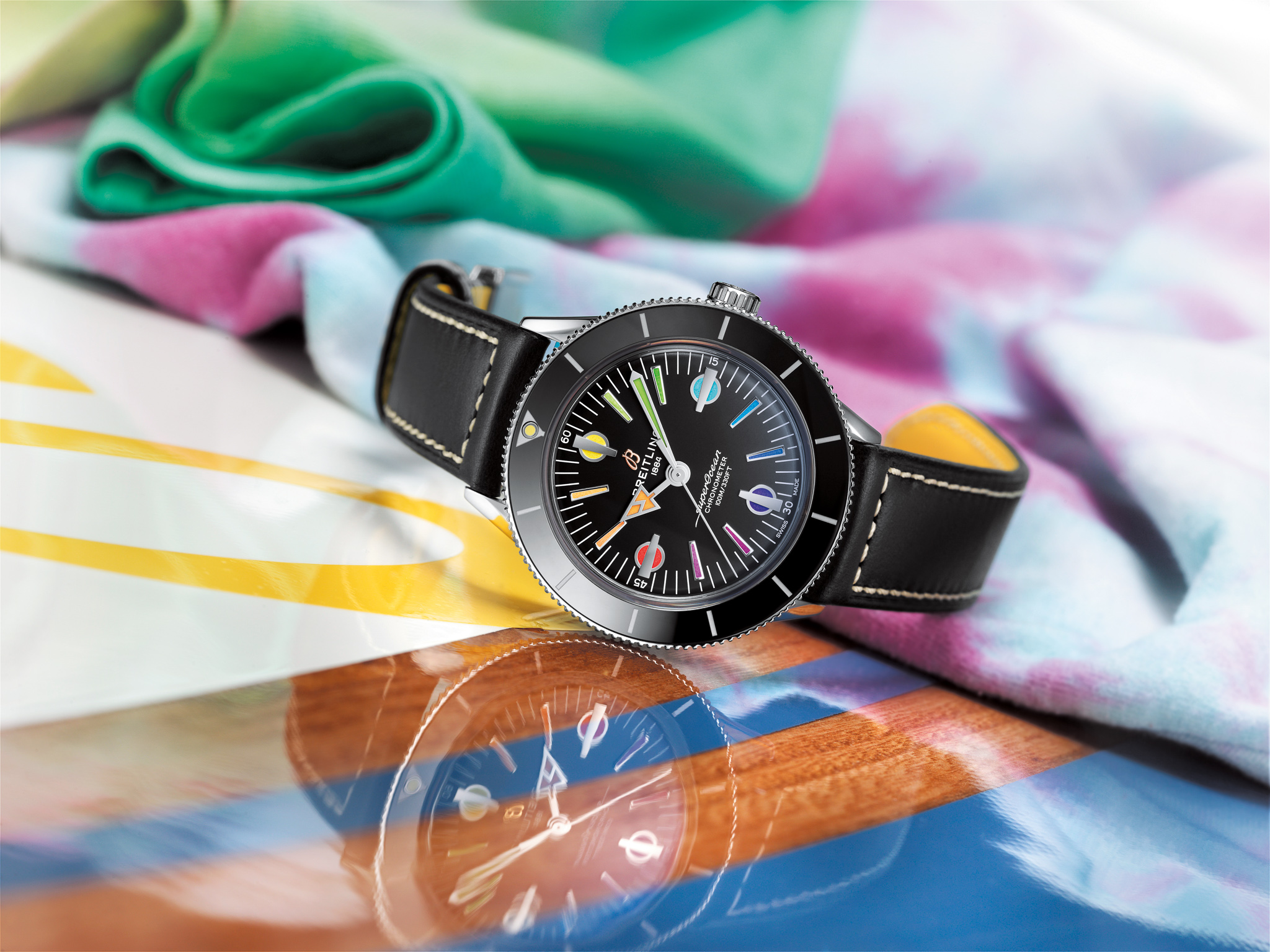 That said, one of the references in the ’57 Edition capsule will be limited to 250 pieces and retailed exclusively at Breitling boutiques. Not surprisingly, it is the wildest of the quartet — reference A103701A1B1A “Limited Edition,” whose dial markers have been rendered in a “rainbow” gradient of multi-colored Super-LumiNova. Given the current popularity of high-jewel rainbow pieces, it’s a fun and colorful, yet tasteful and markedly far more economical way to tap into a slightly more flamboyant style that should fit in nicely for that weeklong Ibiza holiday you’ve got planned after we’re all done sheltering in place. Apart from the dial, everything else about the reference is the same as the other three watches, from the case size to the movement itself. 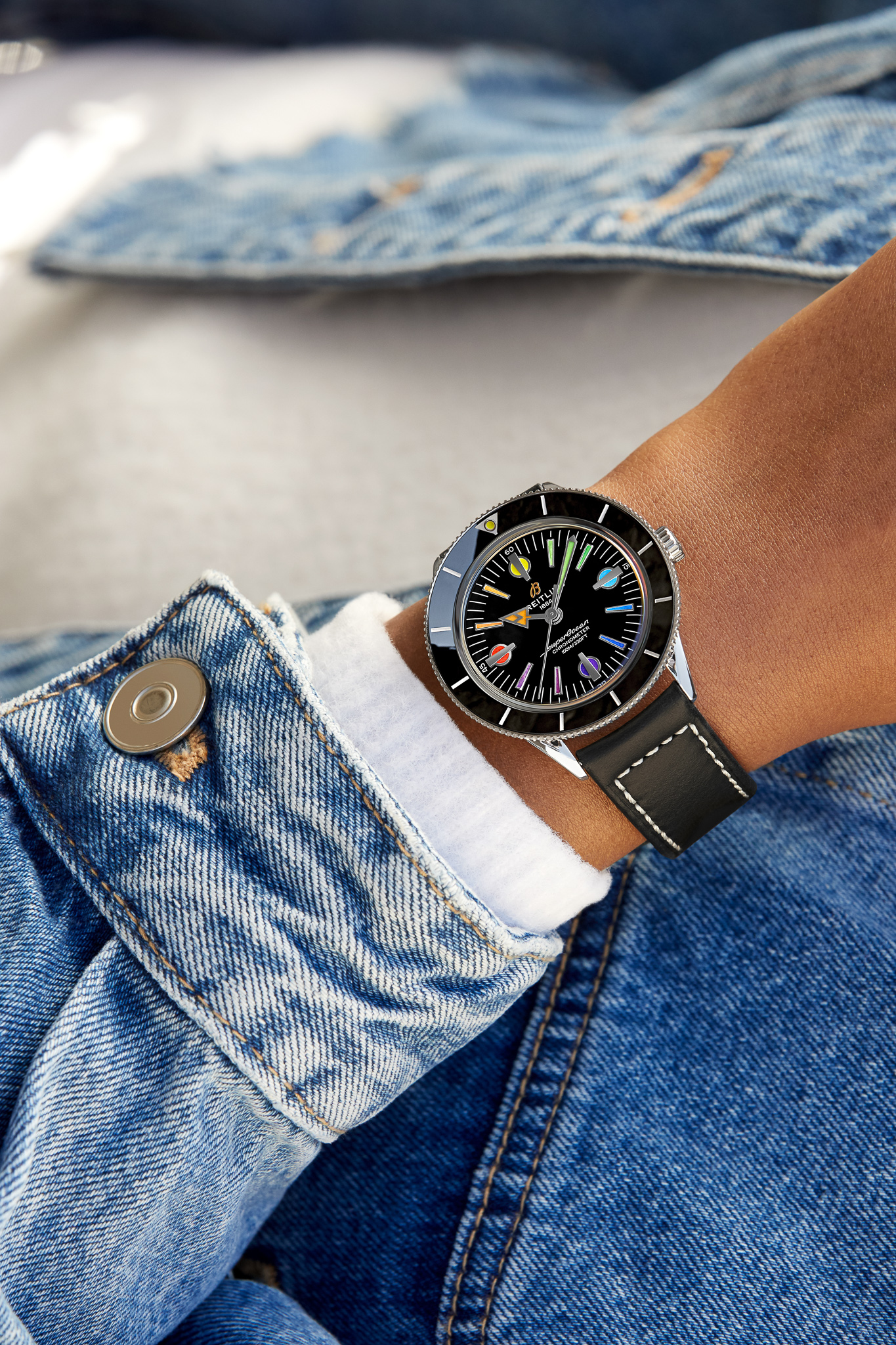 Inside each of the four watches beats Breitling’s B-10, a Chronometer-certified automatic movement that uses the classic ETA 2892 as its base calibre, so its 4Hz beat rate and roughly 42 hours of power reserve should feel pretty familiar. These references, in particular, have been rendered without a date, which should come as welcome news for Superocean Heritage fans who’ve never gotten the “no-date” treatment as the currently available 42mm Superocean Heritage is built with a B-20 Manufacture movement and fitted with a date. 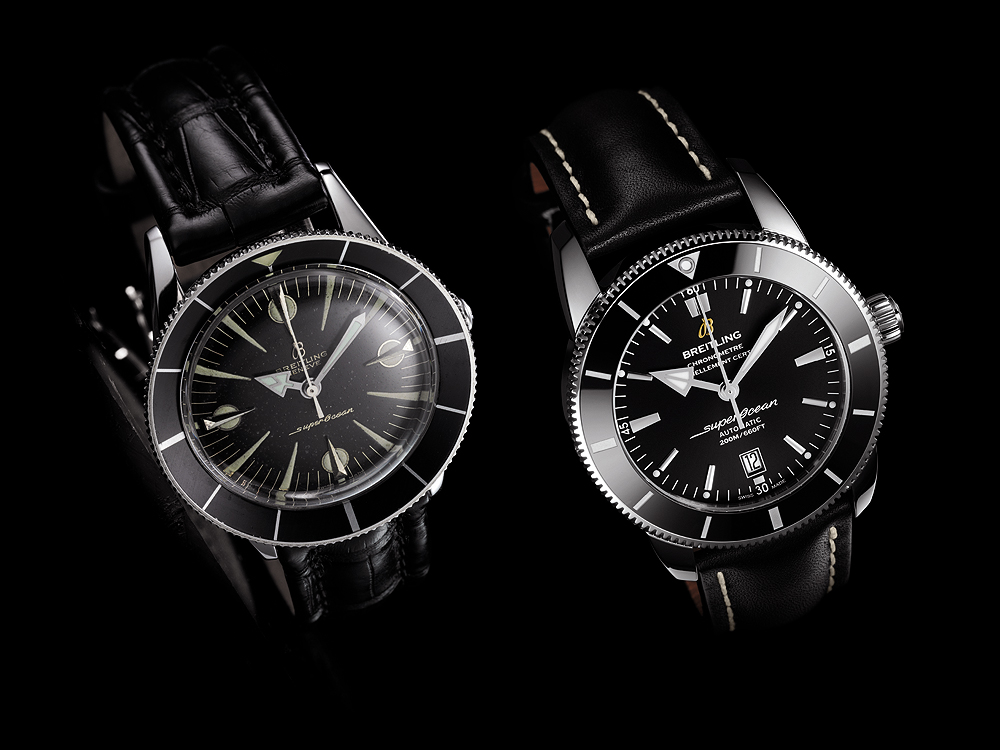 Unlike Breitling’s limited-edition Heritage watches, which have nearly been shot-for-shot re-issues of their vintage counterparts (like the impressive Ref. 806 re-issue which used a new handwound movement like the original), the ’57 Edition watches have been upsized slightly and fitted with bi-directional (not a big deal, considering they’re absent of any specific timekeeping demarcations) sloped ceramic bezel inserts, which might come as a slight disappointment to the purists when the originals were crafted out of Bakelite, but if Breitling’s recent release pattern has been any indicator, there seems to be a high likelihood that a more faithful Superocean Heritage might also be on the way later this summer. Time will certainly tell, but for now, this is still a whole hell of a lot better than a consolation prize. The price of the new Superocean Heritage Automatic 1957 Edition starts at $4,380 on a leather strap ($4835 on milanese bracelet), and jumps to $5,225 for the two-tone black and gold reference on leather strap. The Limited-Edition boutique-exclusive starts at $4,520 on strap and jumps to $5,025 on bracelet. Learn more at breitling.com. 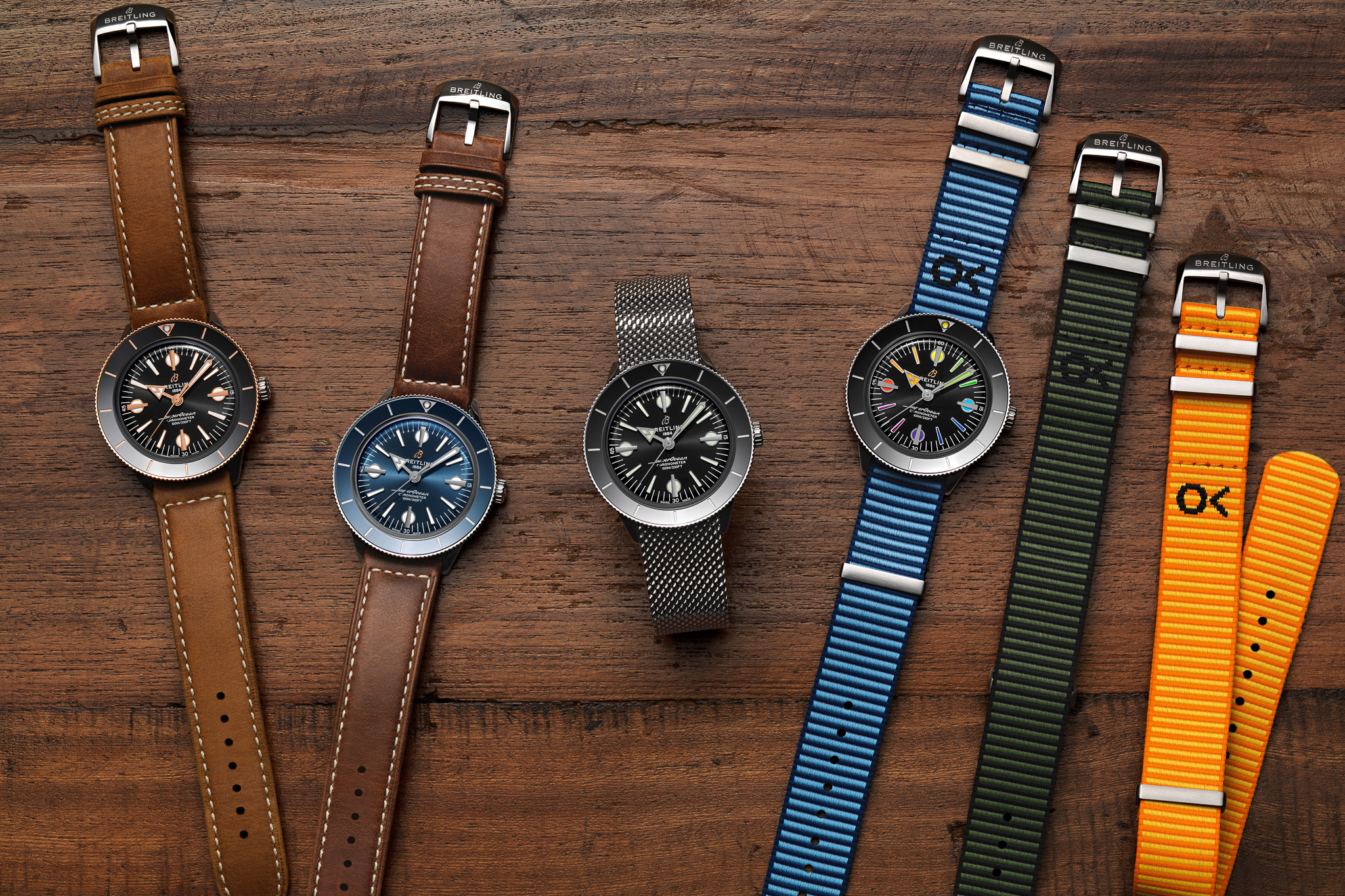