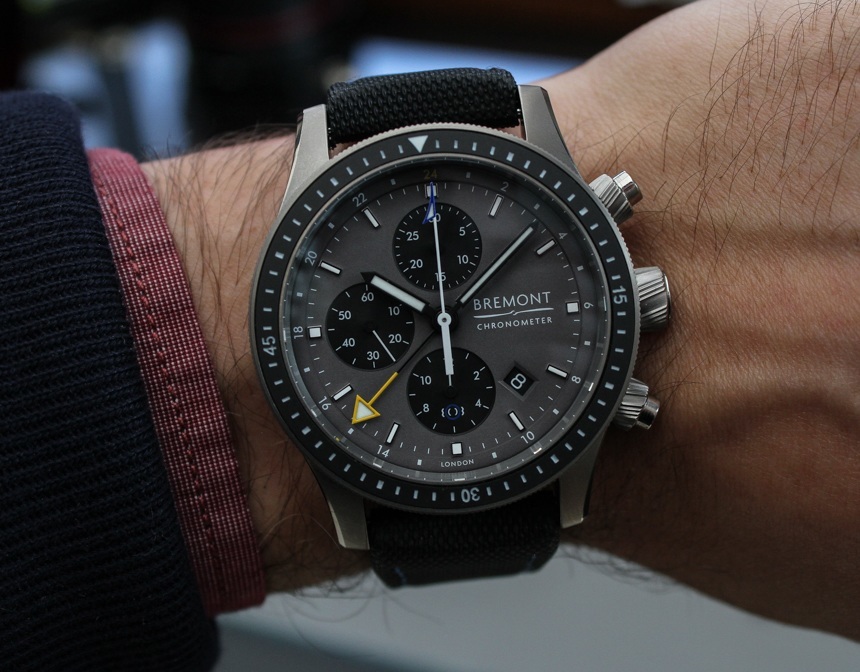 Last year, Bremont announced their partnership with Boeing in the form of the Model 1 three-hander and Model 247 chronograph. The original Boeing models were launched with 465 stainless steel cases and Bremont had said they planned to eventually release titanium versions. The 2015 Bremont Boeing Ti-GMTs are those watches. These are just a couple of the new watches announced by Bremont at Baselworld 2015, but the expansion of the Bremont Boeing range is significant not only for Bremont’s brand, but also their continued connection with one of the most storied names in aviation. 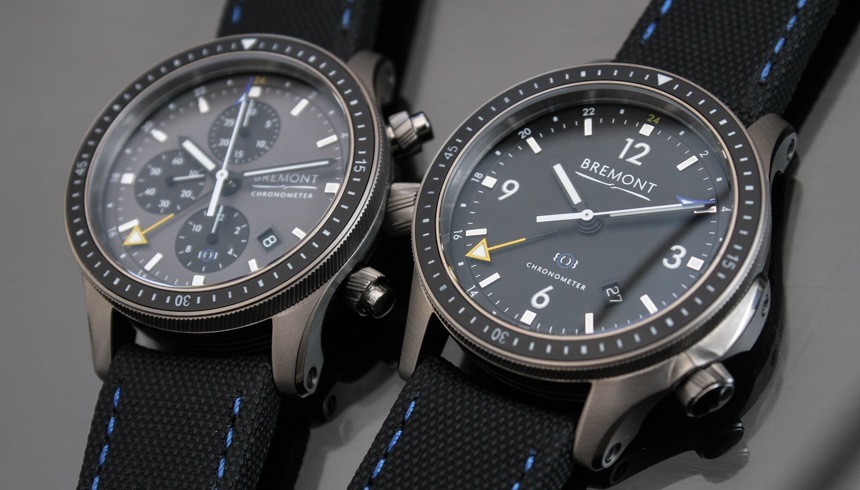 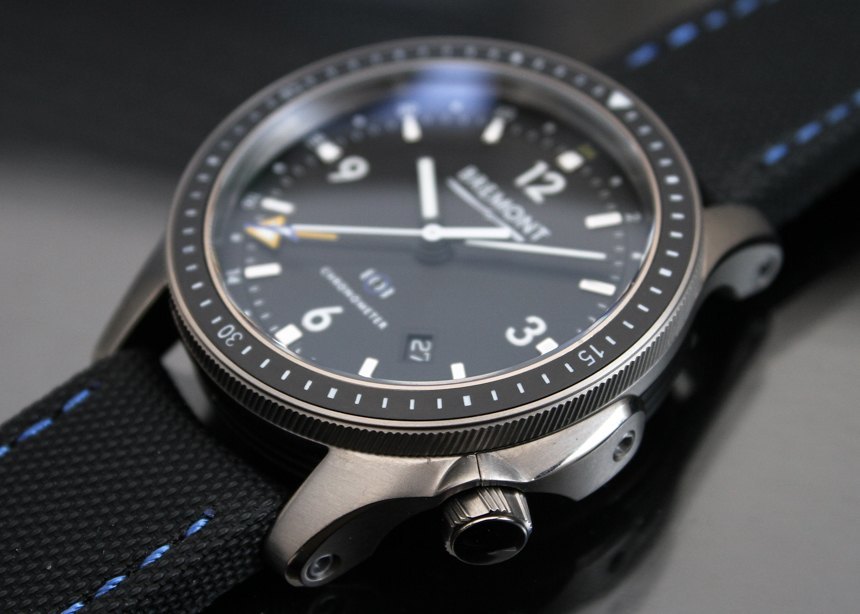 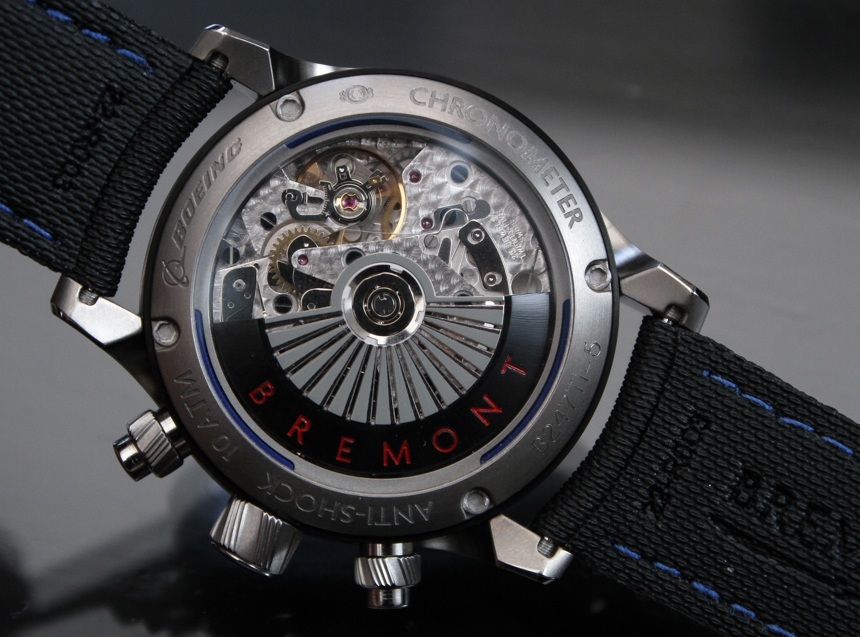 The bezel edge and crowns carry a turbine finishing that offers a positive grip for the setting, bi-directional bezel, and for the Model 246 Ti-GMT chronograph, screw down crowns. The watches seen here are pre-production and some small elements may change, including the winding rotor seen in the photos of the case backs. 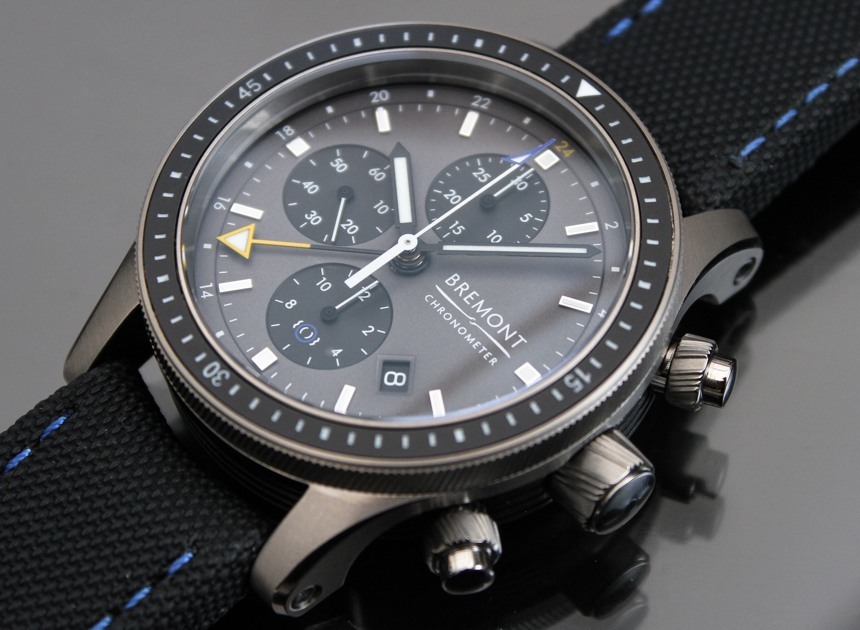 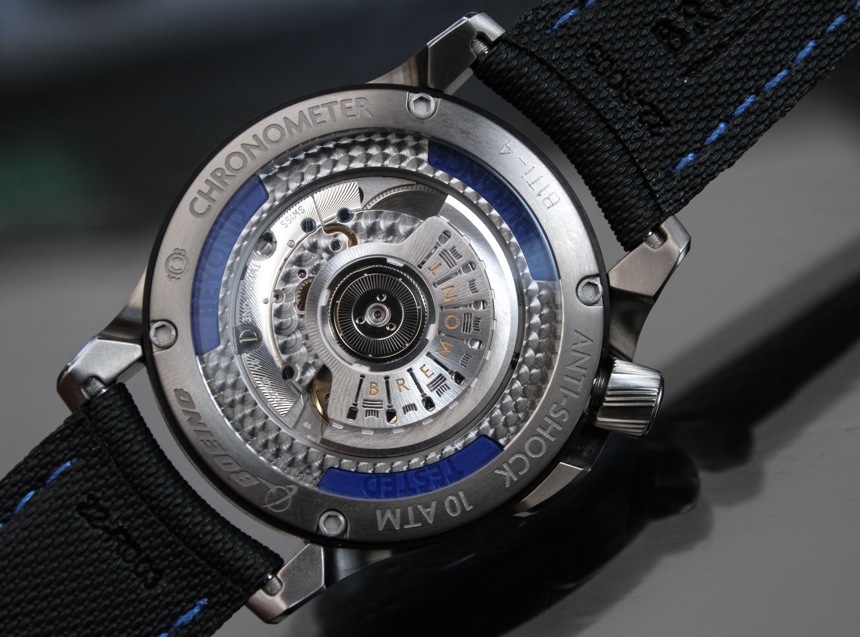 The Bremont Boeing Model 1 Ti-GMT is an attractive alternative to the original three hander, which is still available with either a white or a black dial. The new GMT version packs a dark grey dial with blue accents for the seconds hand and a pop of yellow from the GMT hand and 24-hour marker at twelve o’clock. The dial markers and scale have been updated to offer a 24-hour chapter ring and large arabic numerals for 12, 3, 6 and 9. The handset appears to be largely unchanged, and there is still a date display at 4:30.

The movement is the BE-93-2AE, Bremont’s treatment of an ETA-2893-2. Running at 4 Hz, the BE-93-2AE offers an independent 24-hour GMT hand and 42 hours of power reserve. The movement is not only housed within a soft iron inner case for anti-magnetic protection, but it also rests on an anti-shock movement mount. The front sapphire crystal is afforded Bremont’s outstanding anti-reflective treatment, and the case back also sports a sapphire crystal. As is to be expected from Bremont, the Bremont Boeing Model 1 Ti-GMT is COSC certified and water resistant to 100m (330 ft). 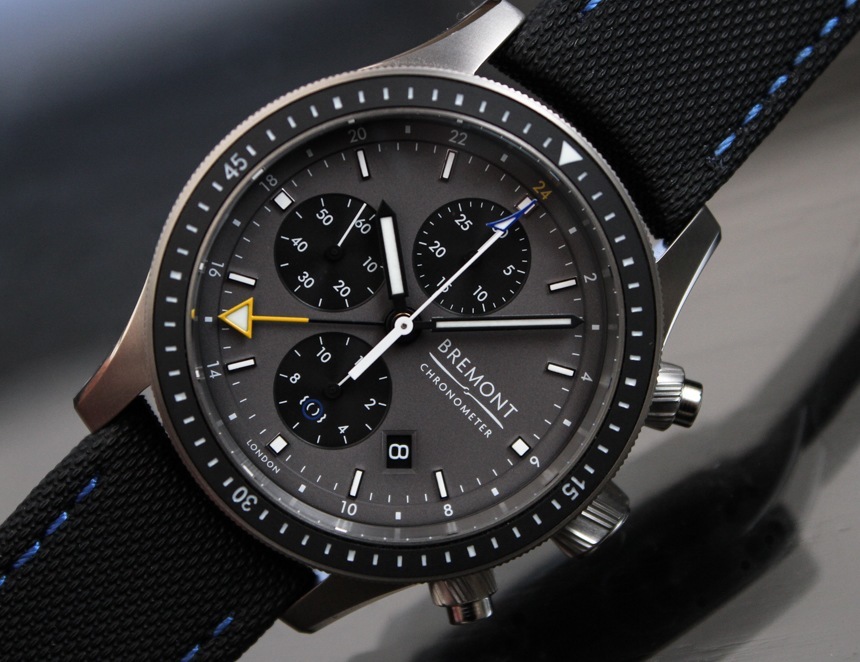 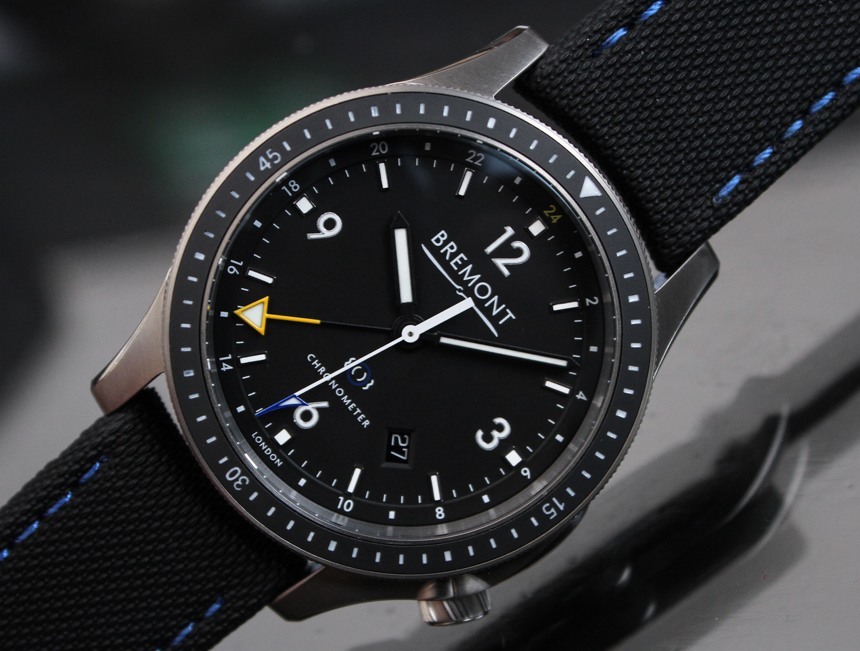 The Bremont Boeing Model 247 Ti-GMT uses Bremont’s version of ETA’s 7750, called the BE-54AE, which is the same automatic GMT chronograph caliber used on many of the ATL-1 models that offer a GMT hand. Much like the BE-93-2AE, the BE-54AE runs at 4Hz with 42 hours of power reserve and COSC certification. 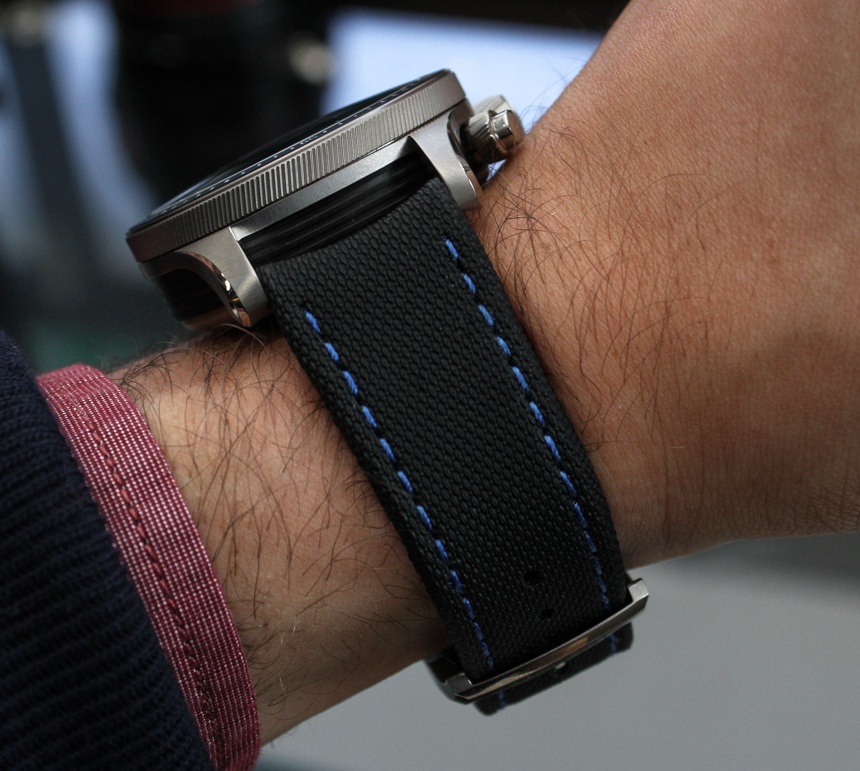 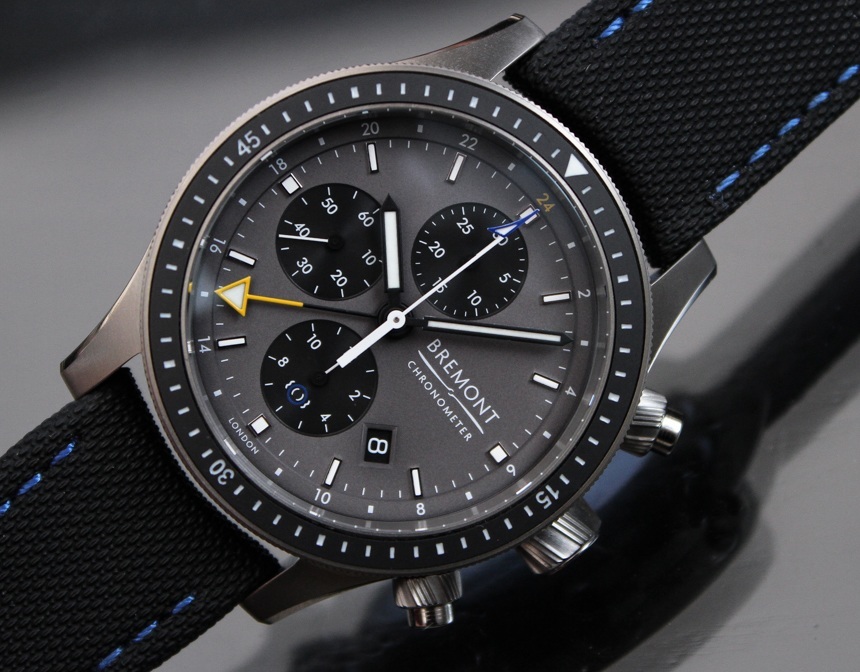 On wrist, both models wear very well and the production version of the Bremont Boeing Model 247 Ti-GMT should be a hair thinner by the time it hits retail. Both exude an expected military aesthetic and, just as with the original Bremont Boeing models, I really love the thin bezel design that promotes a more open view of the dial and the very legible displays. For raw functionality, it’s hard to beat a GMT chronograph, but if you find the dial a bit too busy, the Bremont Boeing Model 1 Ti-GMT offers a similar appeal in a more simplified package.

It is great to see Bremont invest in their connection with Boeing, and I’ve certainly never disliked the addition of GMT functionality. While the Boeing models may sit adjacent to their core line up, Bremont has doubled down after last year’s releases and the new Bremont Boeing Ti-GMT variants offer a lot of additional value without loosing any of the appeal established by the original line up. Available later this year, the Bremont Boeing Model 1 Ti-GMT will retail for $6,450 USD while the Bremont Boeing Model 247 Ti-GMT chronograph will hit your wrist for $7,495 USD. bremont.com