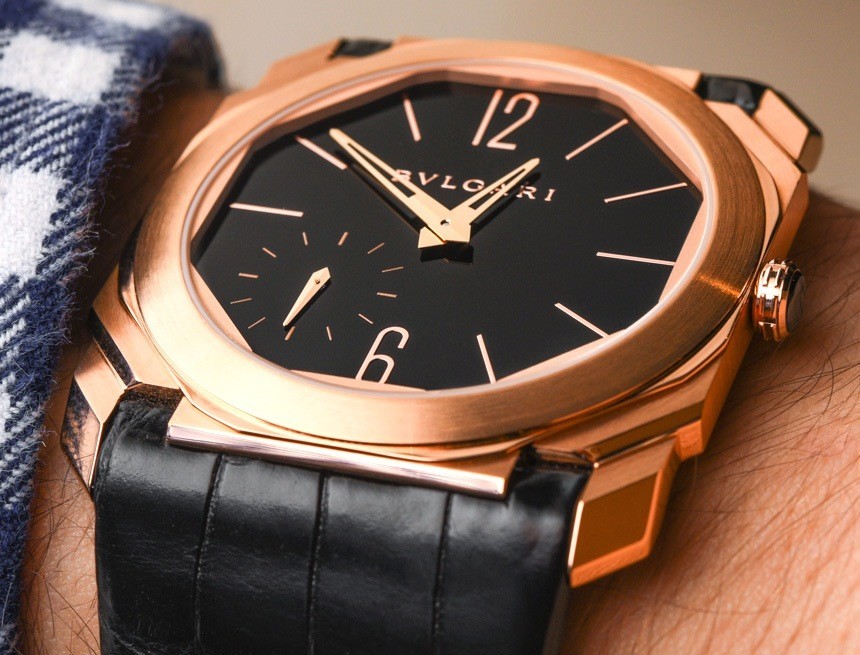 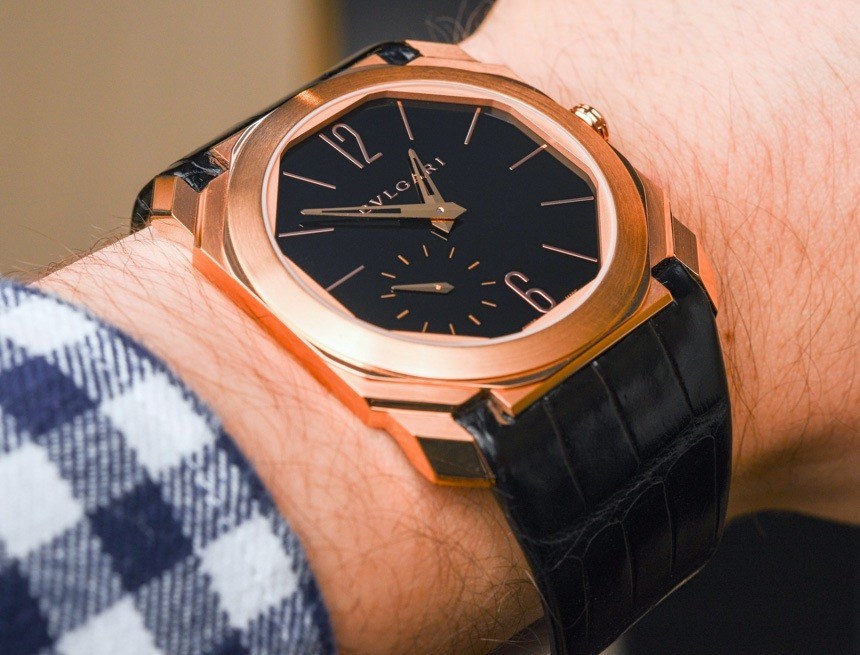 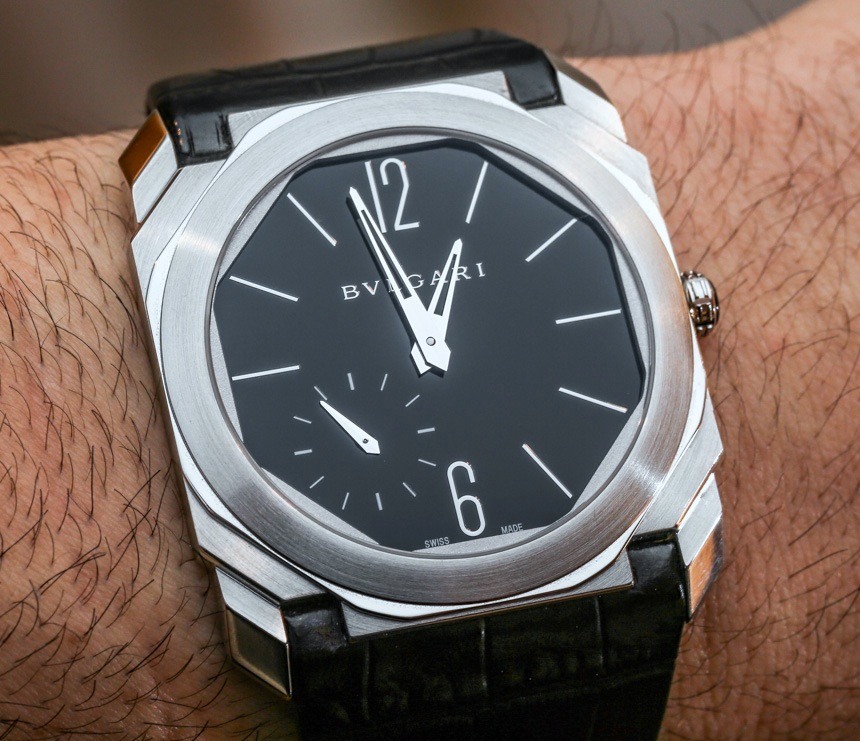 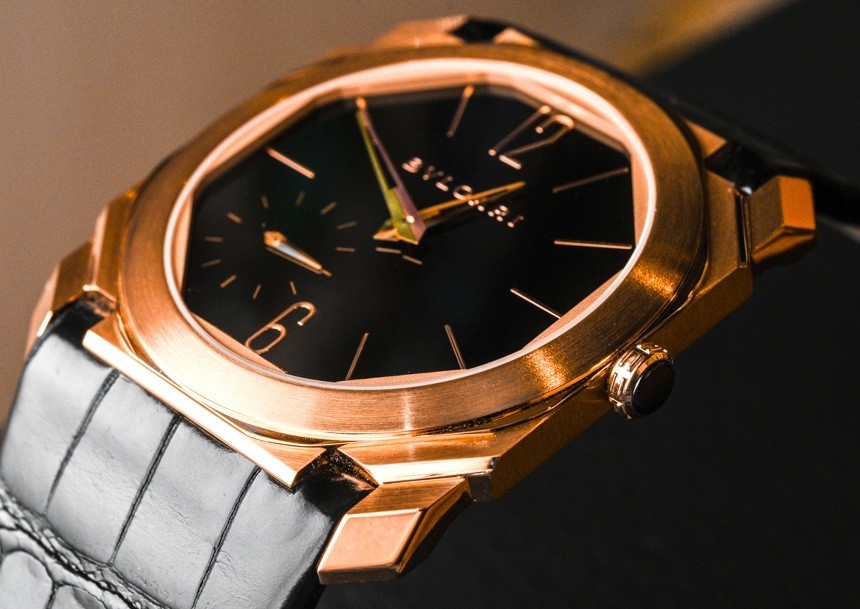 The Bulgari Octo Finissimo is really very thin. I will get to the movement in a moment, but at just 5mm thick, the entire case of the Bulgari Octo Finissimo feels as though it is a mere continuation of the strap. I should mention that the case thicknesses vary just a bit among the three currently available versions. Bulgari produces another platinum model with a diamond-set bezel (reference 102373 BGO40PDLXT) that is 5.75mm thick (understandable, because the stones add thickness), and the 18k pink gold model is just a hair thicker than the 5mm-thick platinum model, being 5.15mm thick – a size difference you aren’t likely to even notice. 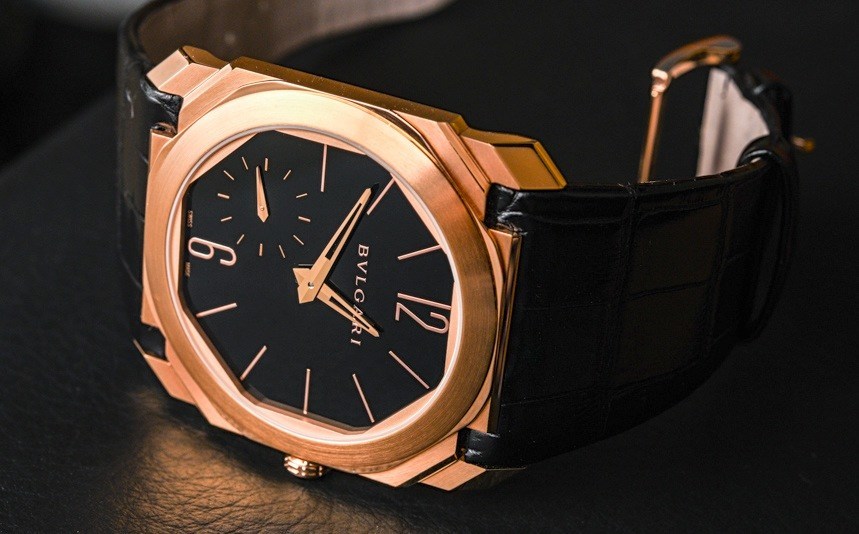 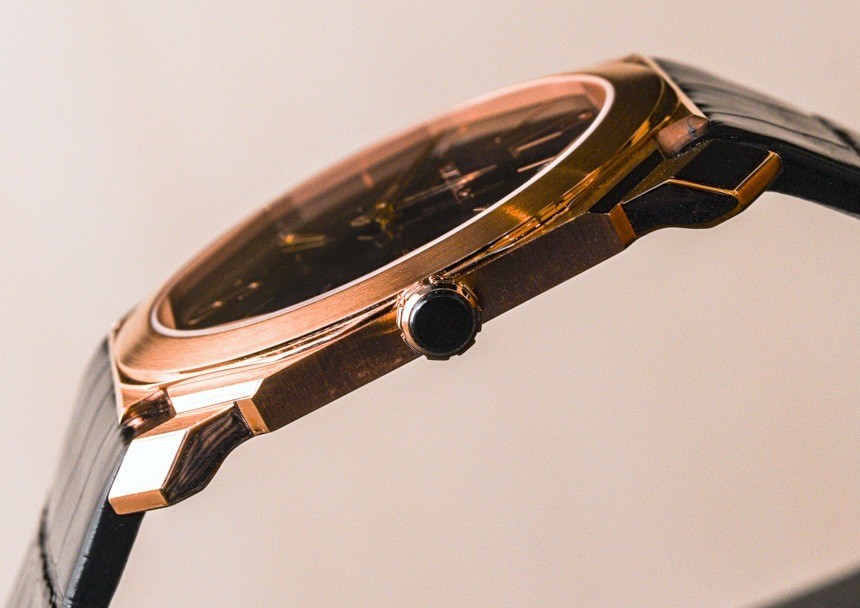 At 40mm wide with a mostly square shape, these aren’t small-wearing timepieces either, and for me, they really epitomize in a lot of ways the absolute loveliness of modern “ultra-thin” watches. My appreciation of modern thin watches really began back in 2010 with the release of the Piaget Altiplano 43 (hands-on here). In the abstract, I could appreciate the notion of a slim-wearing – yet not small in diameter – dress watch, but it wasn’t until I put the watch on, enjoying the remarkably thin profile, that I became enamored with the concept. After Piaget, a lot of other historically proficient watchmakers started to come out with more “ultra-thin” watches, hearkening to a fascination with thin movements that goes back generations. Either a lost art making a comeback, or something that has been around all the time and is entering a new era of appreciation, I think there are a lot of collectors out there who would or already do enjoy a bold-wearing yet very thin timepiece such as this. 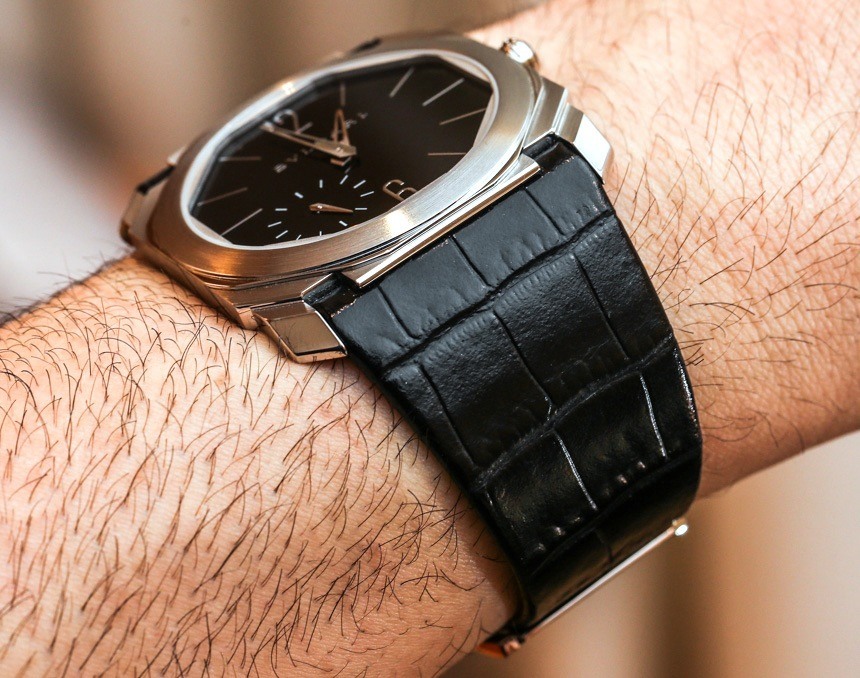 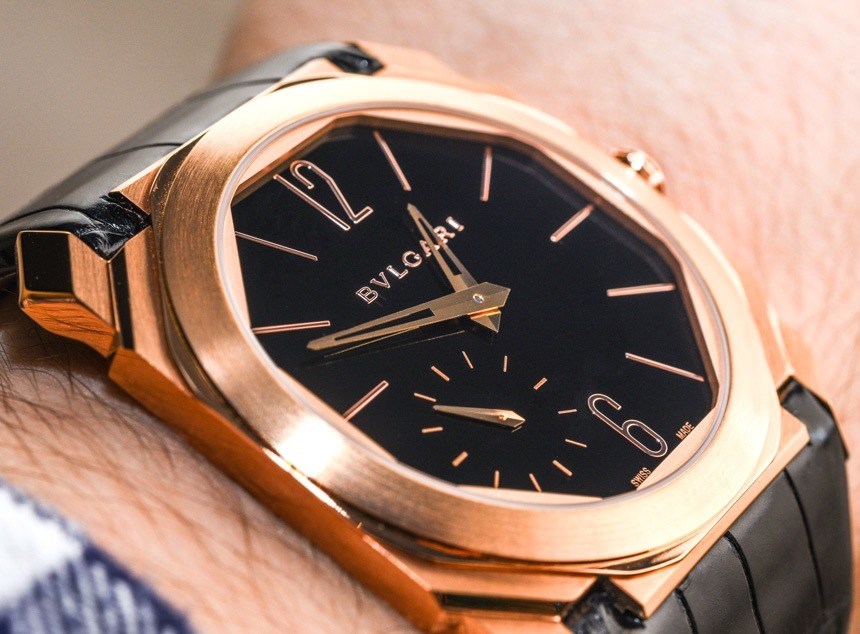 The Gerald Genta-based Octo watch collection has become a real icon in the Bulgari collection, and I think that the Bulgari Octo Finissimo benefits from the fact that it exists as part of a larger collection of Octo watches. It just wouldn’t have the same “branding” power as it does without there being other versions of the Octo in less slim cases. Thus, wearers have the benefit of the notoriety of the Octo, but with a special movement and super slick, thin profile. It is almost crazy how impossibly thin this watch looks on your wrist. 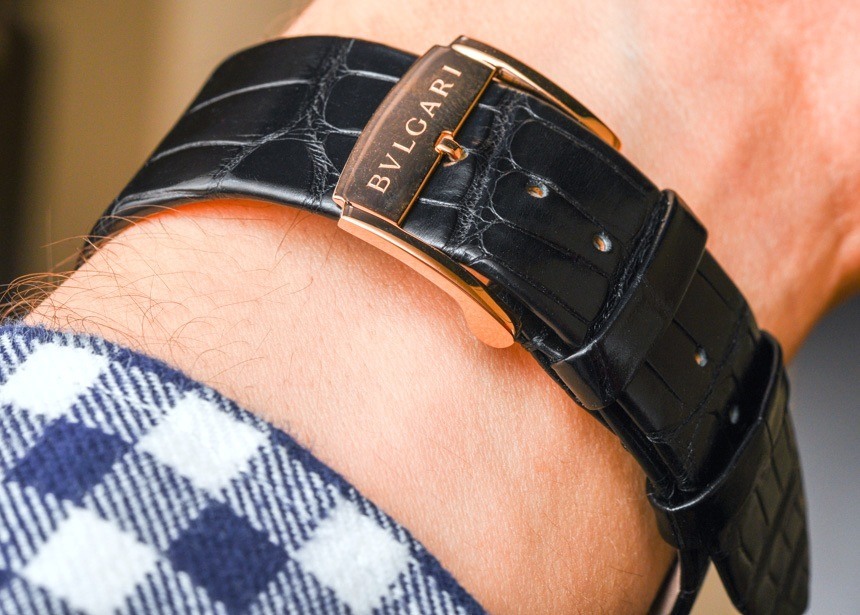 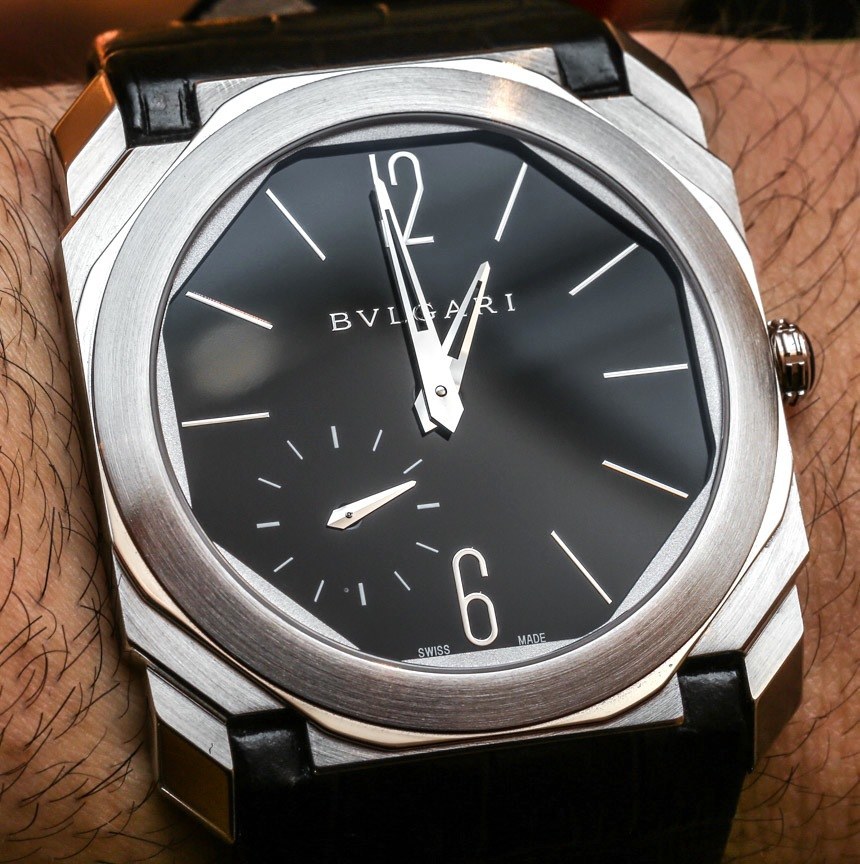 Bulgari has improved on the legibility of the dial which at first was matted by a super glossy black lacquer dial and polished applied hour markers and hands. In gold, the dial looks particularly nice, actually – but with that said, the Octo-style case does happen to look super nice in the steel/white gold/platinum tone. You might be wondering what the Octo case (which is normally thicker) looks like… well, “flattened.” I was sort of concerned about this, but in most ways, the case is almost exactly the same at the standard Octo – just a few millimeters thinner. Retained is the attractive contrast polishing with mostly brushed surfaces but also some nice polished surfaces which are most easily noticed from the side. Set into the crown is a black ceramic cabochon.

Attached to the Bulgari Octo Finissimo case is a tapered alligator strap which is stitch-less thanks to its “rolled side” construction (which I almost universally prefer in alligator or crocodile straps on dress watches). 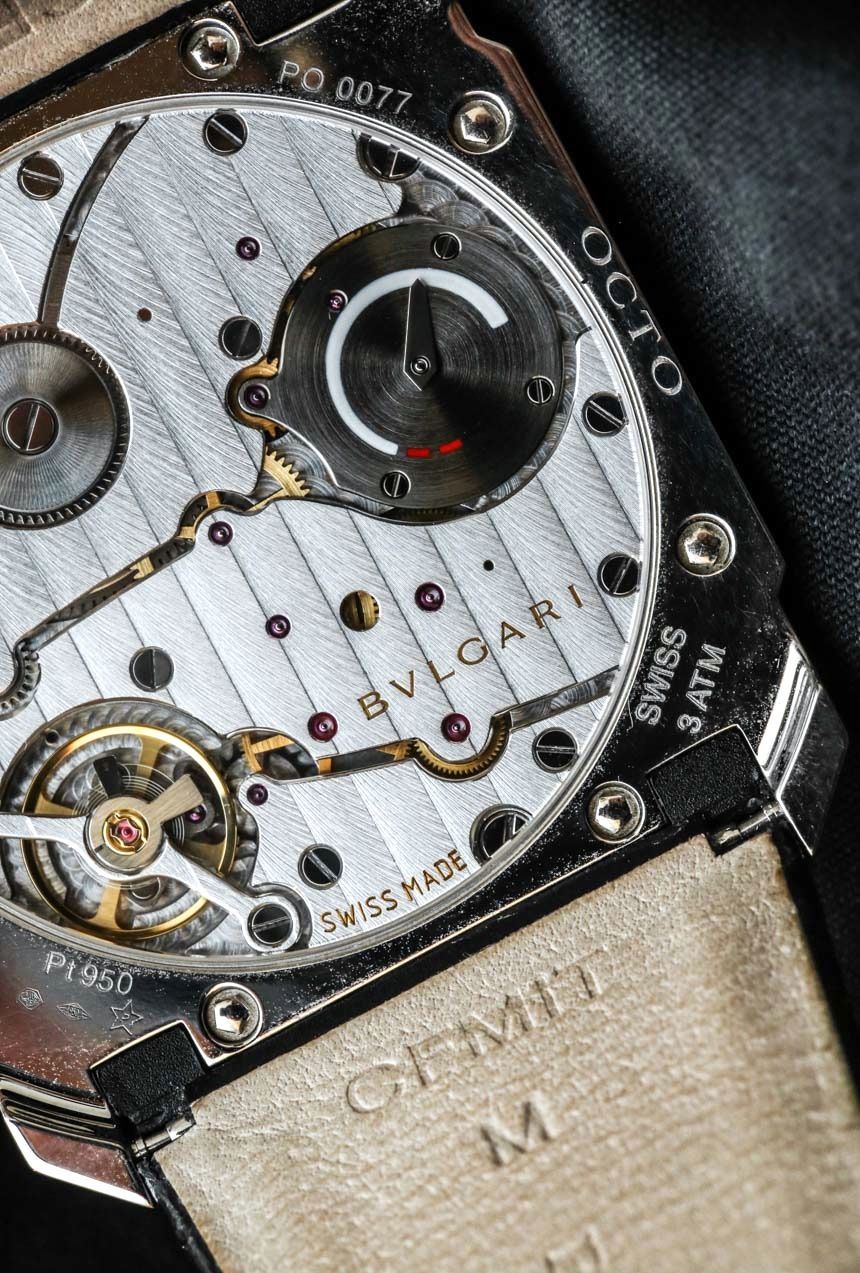 Inside the Bulgari Octo Finissimo is the in-house-made Bulgari caliber BVL 128 manually wound movement that is the heart of this “extra-thin” package. The movement is just 2.23mm thick (oddly, a bit thicker than the 1.95mm thick movement in the Bulgari Octo Finissimo Tourbillon), which is really very thin. Buglari was able to do this partially because of how wide the movement is – and another benefit of the watch is that when you view the movement through the sapphire crystal caseback it fills up much of the case. 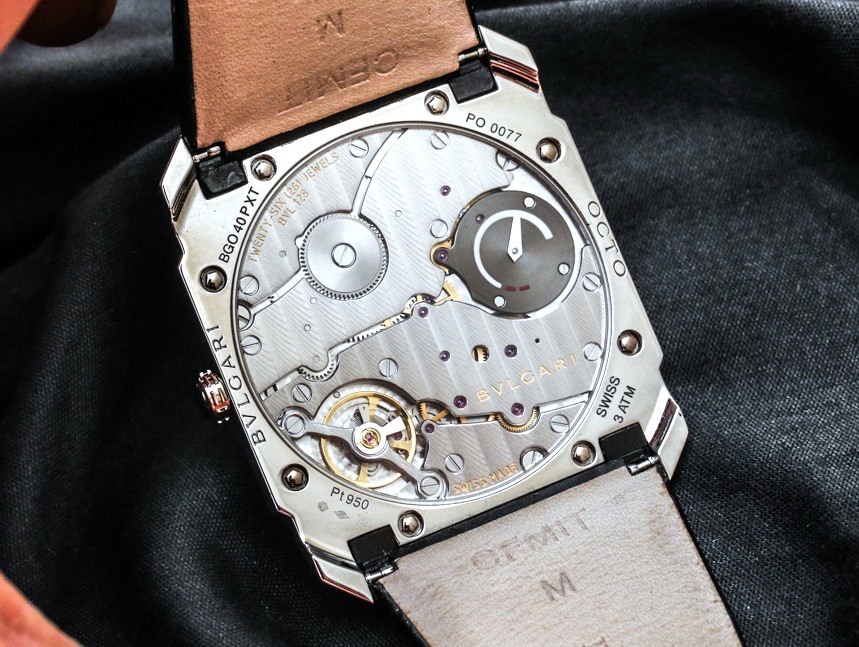 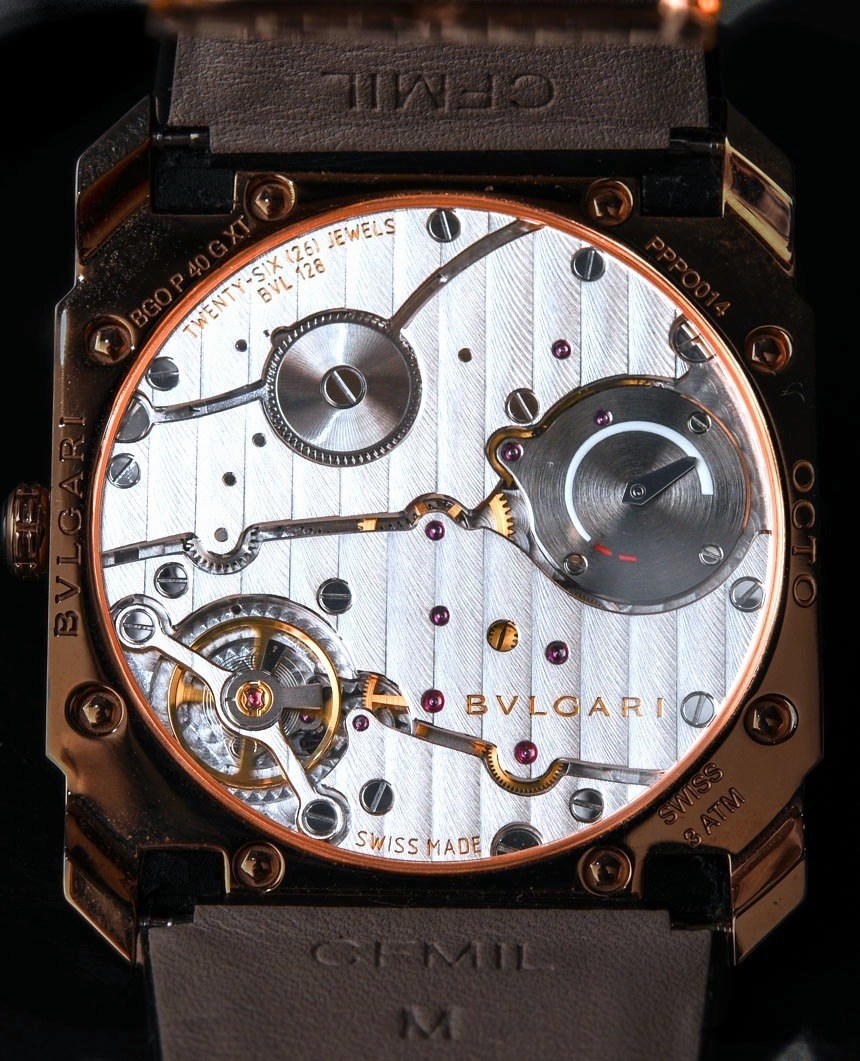 The BVL 128 movement operates at a modern 4Hz and has a long power reserve (for a movement this thin) of 70 hours. The movement indicates the hours and minutes with an off-centered subsidiary seconds dial. Wonderfully, Bulgari decided to include a power reserve indicator on the rear of the movement – a feature that, for me, really ups the “want” level because I feel that power reserve indicators are almost a must (subjective choice) when it comes to manually wound watches. Otherwise, I just compulsively wind the watch all the time. 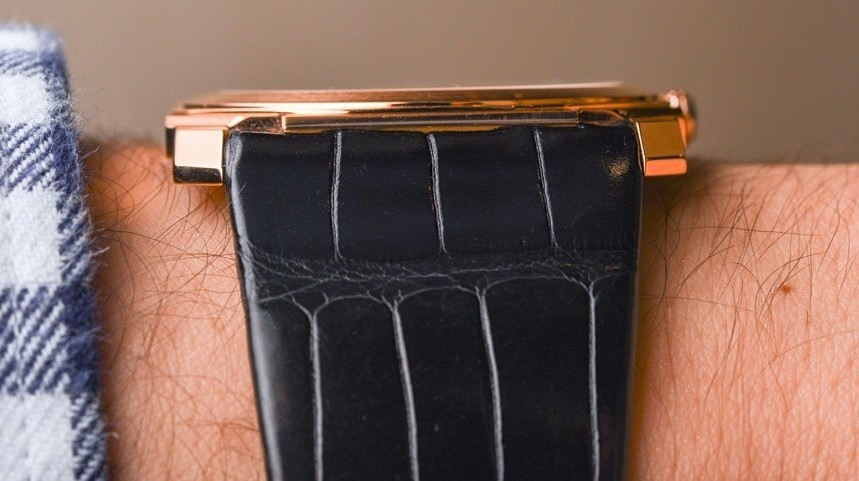 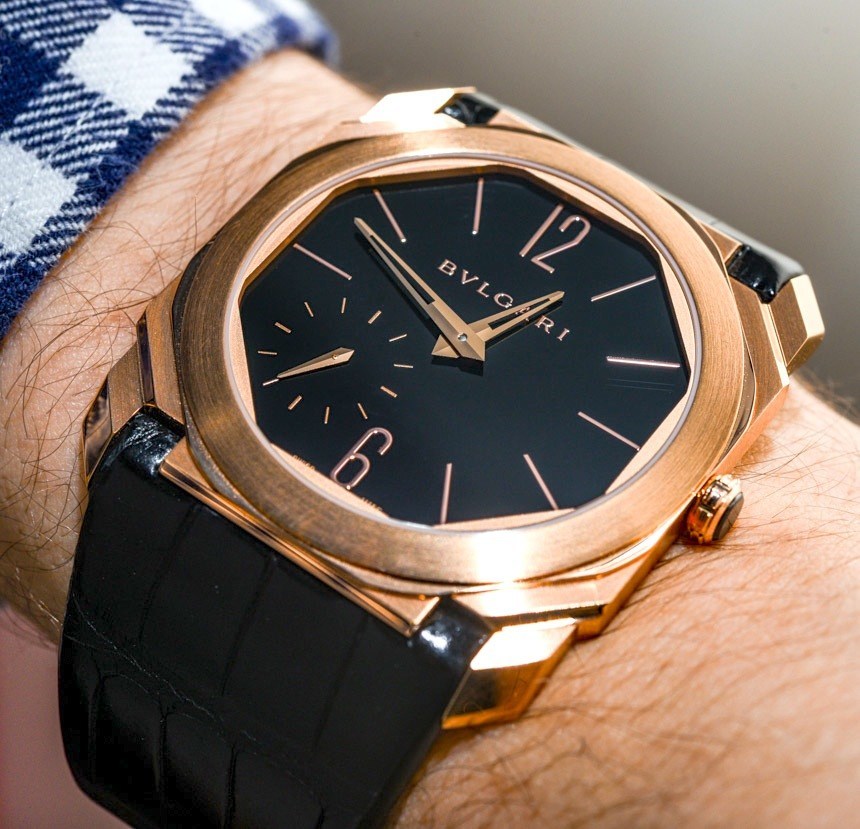 It isn’t cheap, and it isn’t perfect for everyone, but it is original, horologically cool, and really pretty. The Bulgari Octo Finissimo is probably one of the most underrated pretty yet masculine dress watches around – and it is comfortable and useful to boot. So my question is if Bulgari would ever produce one in steel? Hard to say, but I don’t think it will be anytime soon. Still, the prices aren’t that bad for what you get. This reference 102028 BGO40BPLXT Bulgari Octo Finissimo in platinum is priced at $29,800, and with diamonds in platinum it goes up to $40,100. In 18k pink gold, the reference 102371 BGOP40BGLXT feels like a relative bargain at $22,900. bulgari.com