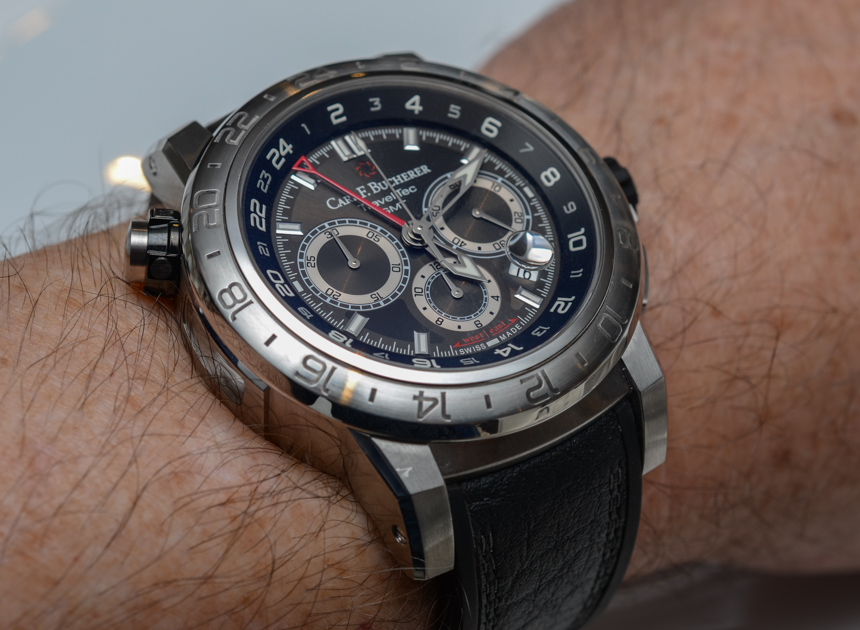 Here’s a fun fact: Carl F. Bucherer is one of the the oldest luxury watchmakers in Switzerland still wholly owned by its founding family – a feat that grows more and more impressive every year as the industry’s original independents are measured in continually dwindling numbers. The Carl F. Bucherer Patravi TravelTec II watch is a product of the family’s third generation of management – an ultra-modern traveler’s watch that packs a staggering amount of detail and multi-timezone capability in a hefty 47mm case that should appeal to any frequent fliers looking to throw discretion to the wind in the name of owning a jumping-hour GMT chronometer. It’s not cheap, but you won’t find one on every other wrist and the quality, character, and style are on point. 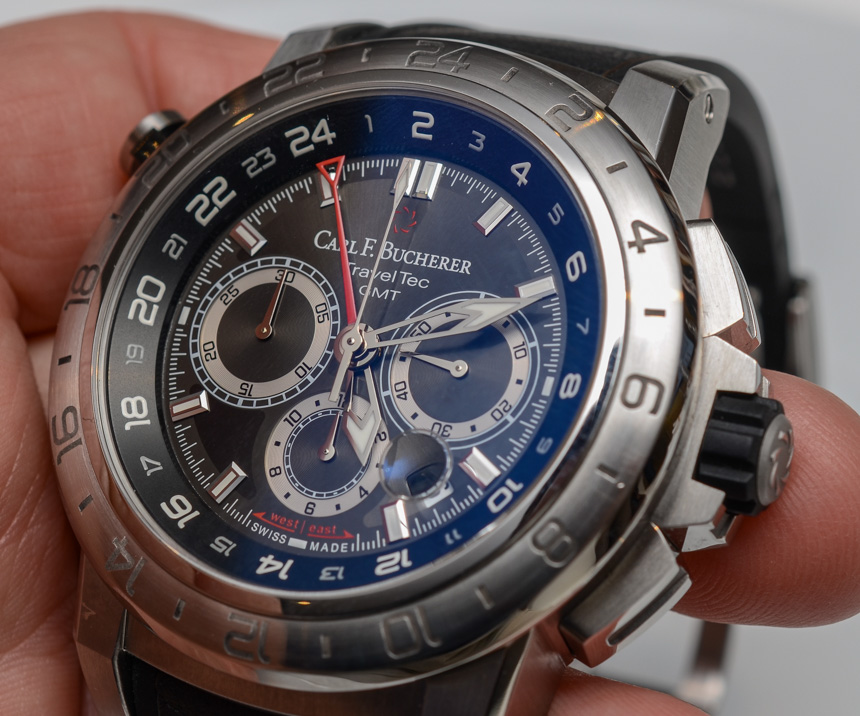 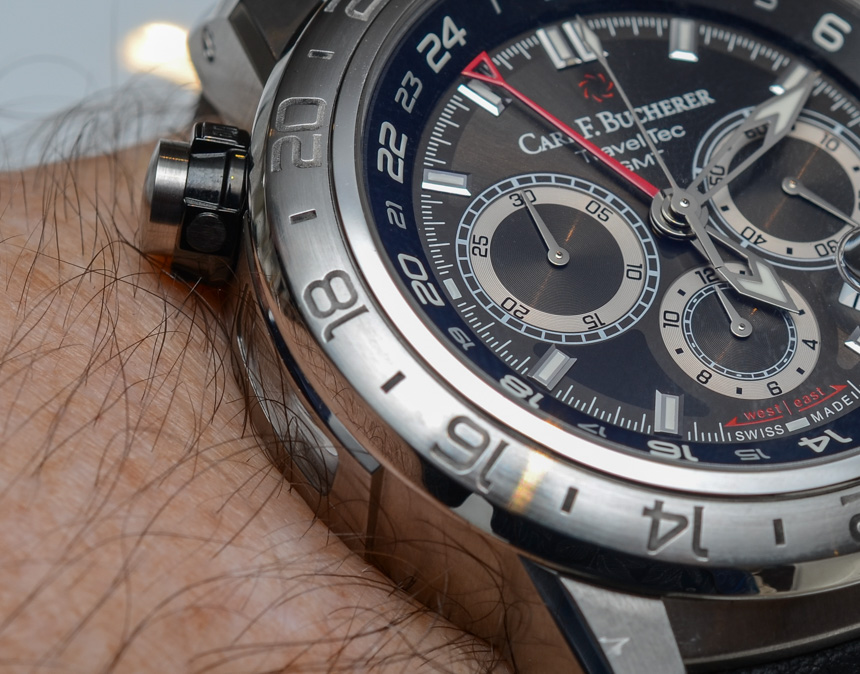 Latin for ‘accomplish’ (or the act of bringing something to completion), ‘Patravi’ is the naming convention for Carl F. Bucherer’s most dynamic collection. Bold and innovative twists on classic sport watch styles rule the roost here – epitomized in the TravelTec II, which makes no apologies for its size and overwhelming busyness – like a Daytona-Explorer II lovechild bred for power-lifters. Even still, there are some nice details and functionality here, like the dial’s impressive depth, and the ability to read three time zones at once, which should be equally appreciated by someone with a discerning eye and a confident wrist. 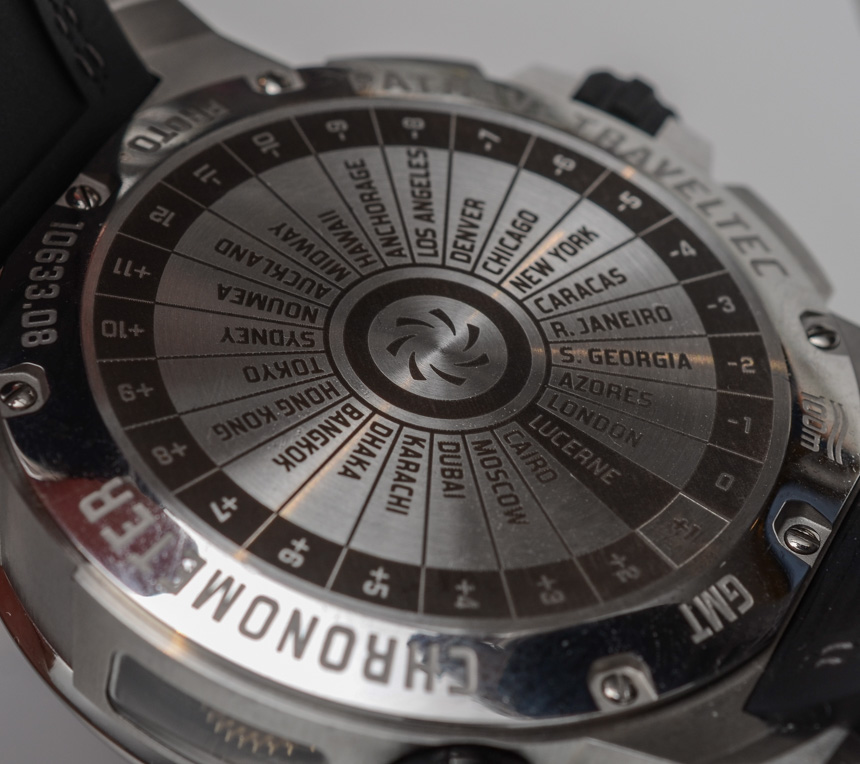 Being a family-owned and run watchmaker with a strong commitment to innovation, it should come as little surprise that Carl F. Bucherer has developed a stable of its own in-house calibers – unfortunately though, the TravelTec II doesn’t use one of them. Instead, we have the CFB Caliber 1901.1 chronometer – a heavily modified ETA 2894 GMT, equipped with a chronograph, and a pusher which rotates the inner 24-hour bezel – and in doing so, also jumps the date forward and back, accordingly as needed, which is particularly neat. 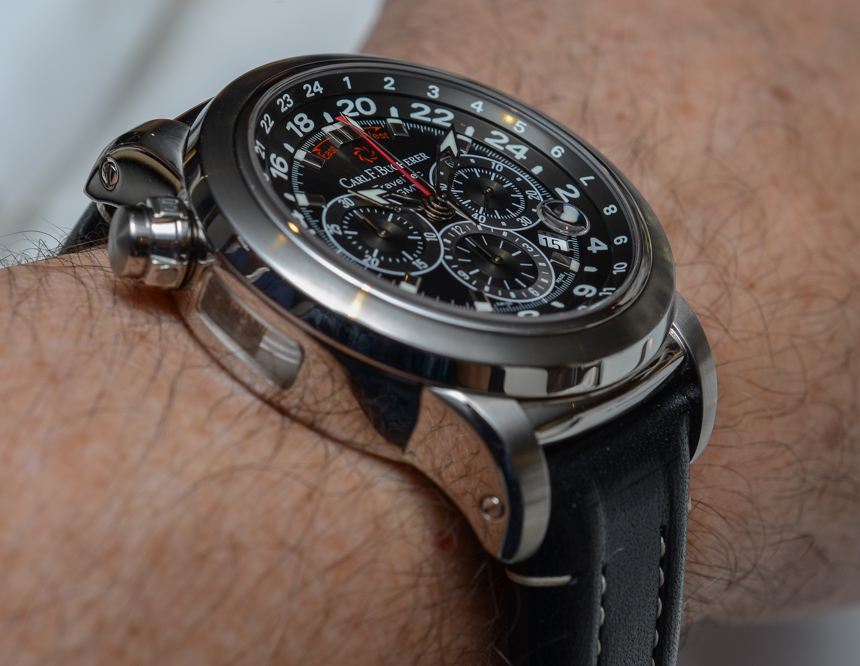 As mentioned, the TravelTec II’s stainless steel case is no trembling flower, measuring 47mm by 16mm thick. Its cousin is also available in a black DLC variant, which, as with the case of many black watches, manages to make those dimensions wear even larger, so if there’s any doubt in your mind as to which version might be more ‘wearable,’ the TravelTec II in SS is probably the way to go. 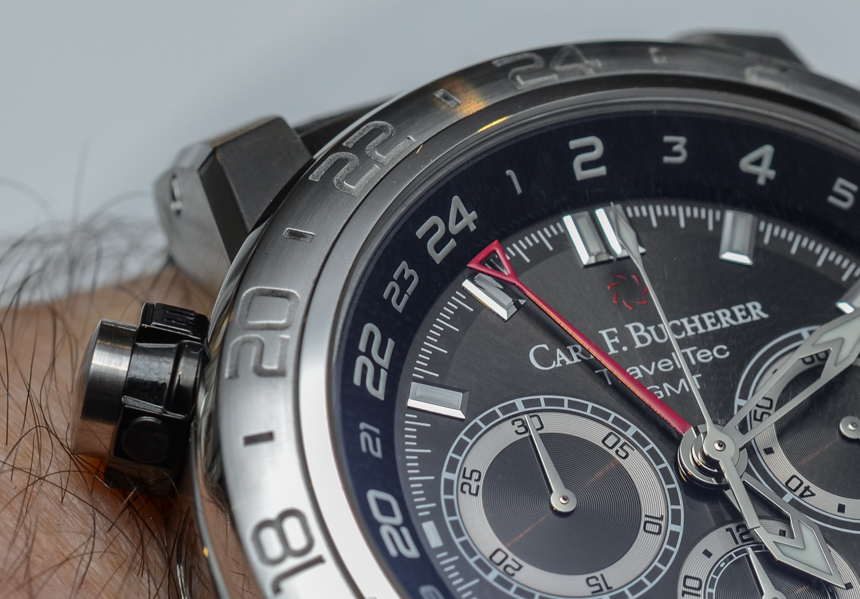 The case architecture itself is virtually the same, with key signatures like the GMT selector at 10:00, movement window at 9:00, and the rounded bezel design, which now employs a fixed, engraved 24-hour ring – a nice update which more efficiently spreads out the watch’s visual data and enables the reading of that third time zone via the red 24-hour GMT hand. On the original TravelTec, the transition was jarring – going from the crazy-busy dial to smooth, rounded bezel looked cool, but it also wasn’t really the most judicial use of the case’s available real estate. 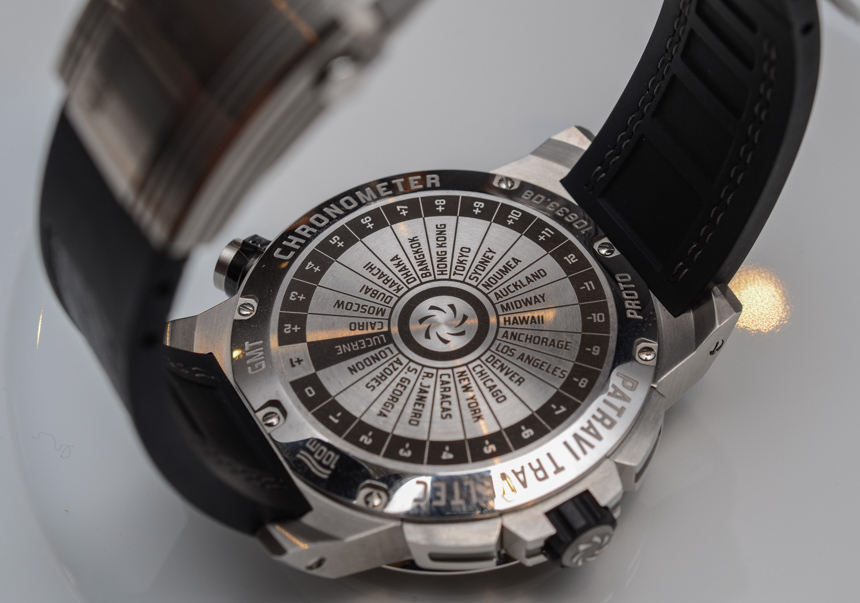 One other notable change between versions of the TravelTec is in the caseback. I, for one, preferred the outgoing version, with its large, retro-futuristic earth motif, ringed by the TravelTec’s bezel and capped with its flanged crown – perhaps a sly nod to the watch’s planet-sized footprint on the wrist? Either way, it’s been scaled back considerably, with just a full rundown of the globe’s time zones and the usual respective city from each, save for Lucerne, Carl F. Bucherer’s city of origin getting the nod instead of the usual Geneva. In its new design though, the caseback itself serves a little more purpose than before, acting as a useful reference chart when setting the GMT hand. 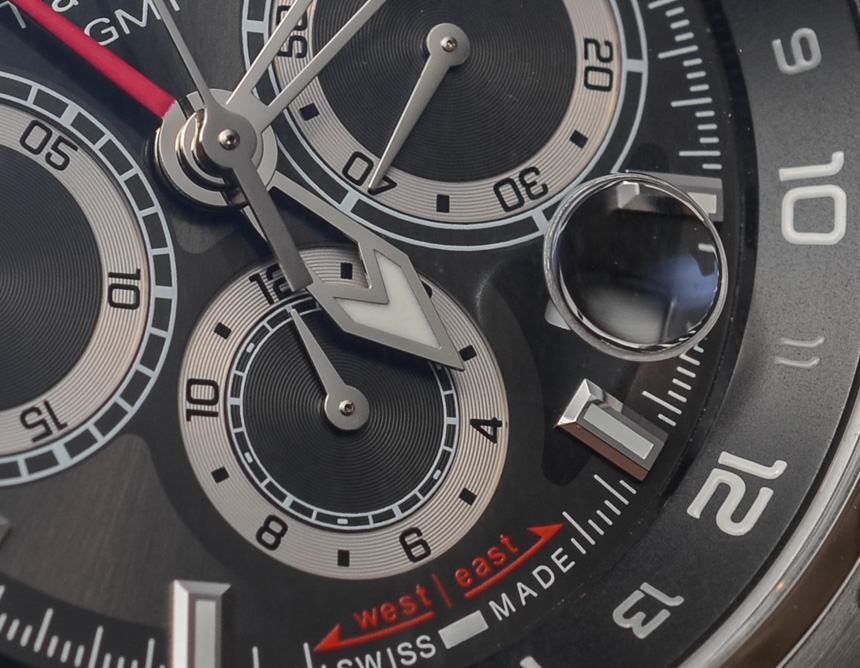 From the snailed sub-dials and beveled, mirror-polished luminous indices to the modern, skeletonized handset and sporty application of color, there’s more than enough detail in the TravelTec II to keep an everyday wearer from getting bored. Even the perfectly spherical date magnifier (love it or hate it) adds texture and depth to the dial from every angle. That said, there’s very little about the TravelTec II that makes it a watch for every wrist, or every personality. While the amount of detail on the dial might be somewhat divisive (I personally love it), the size of the watch greatly reduces its prospective audience size. 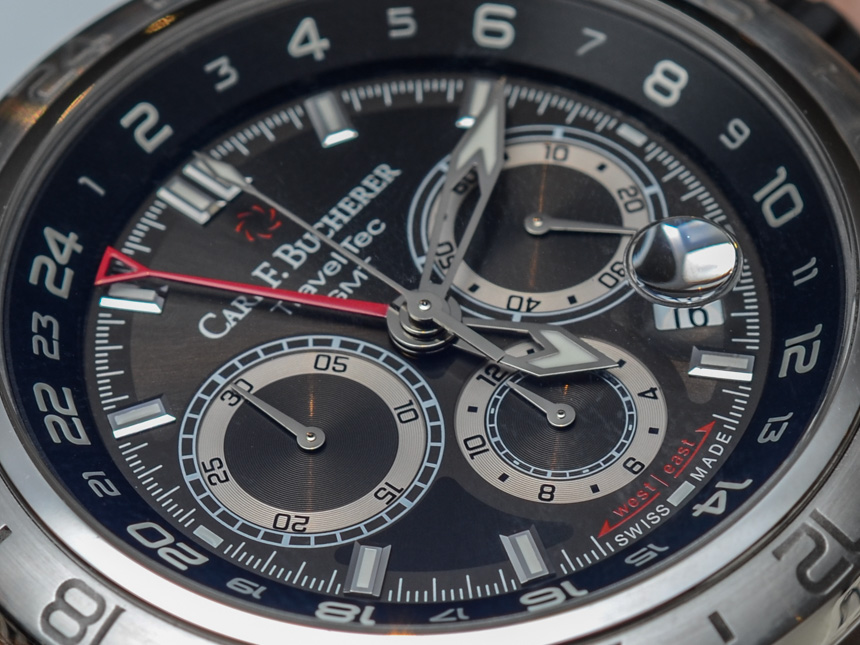 There’s definitely still an audience for these larger-than-life traveler watches, and that means it’s a crowded field with watches like the Breitling Chronomat GMT or Girard Perregaux Time Traveller, I’d wager that the frequent flier – someone who might prefer more discretion while away from home, is probably not the audience that would get the most enjoyment out of this watch – despite the TravelTec II’s truly useful jumping 24-hour complication. The price for the Carl F. Bucherer Patravi TravelTec II in stainless steel on the rubber and calfskin leather strap is $12,900. carl-f-bucherer.com