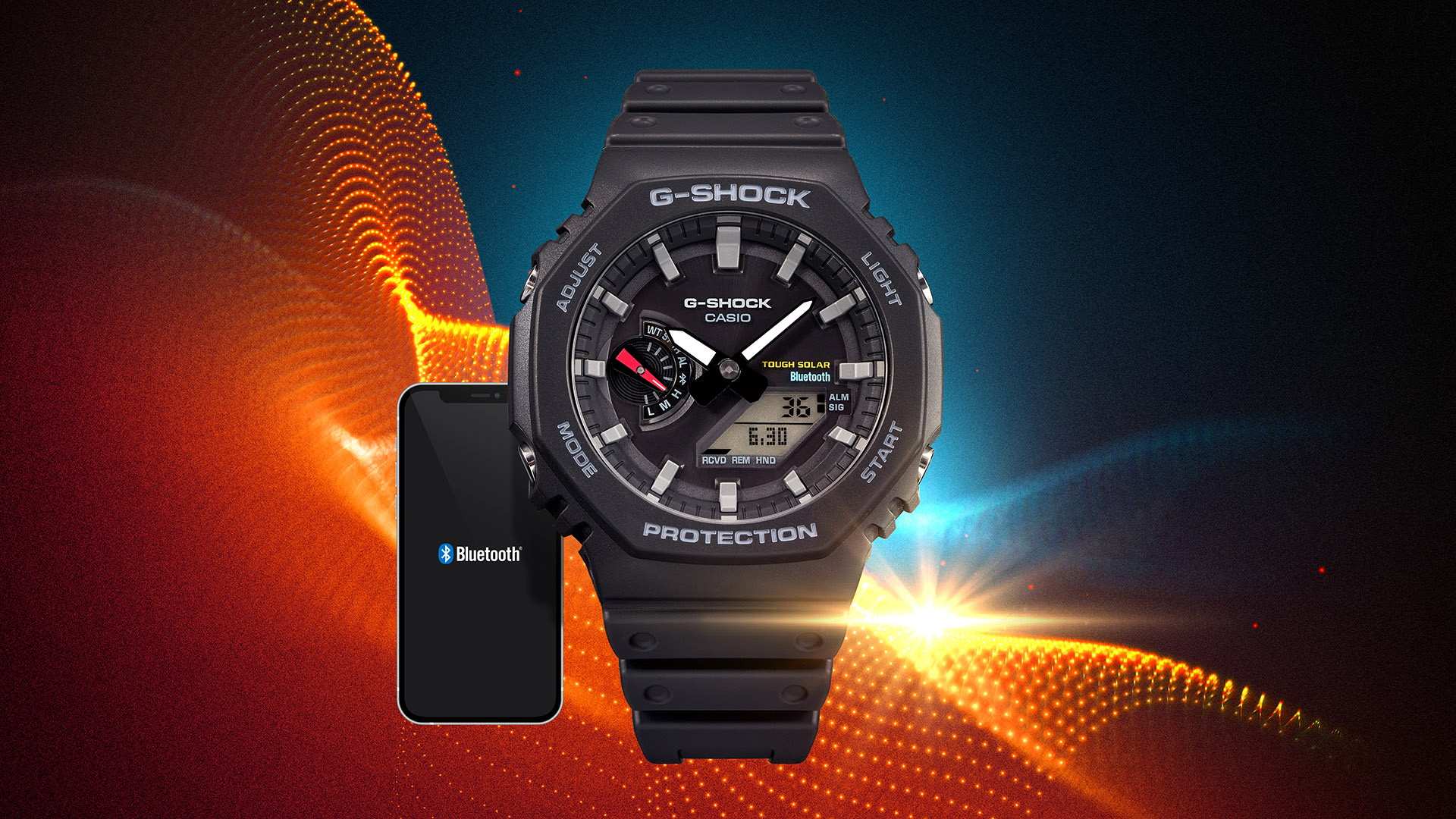 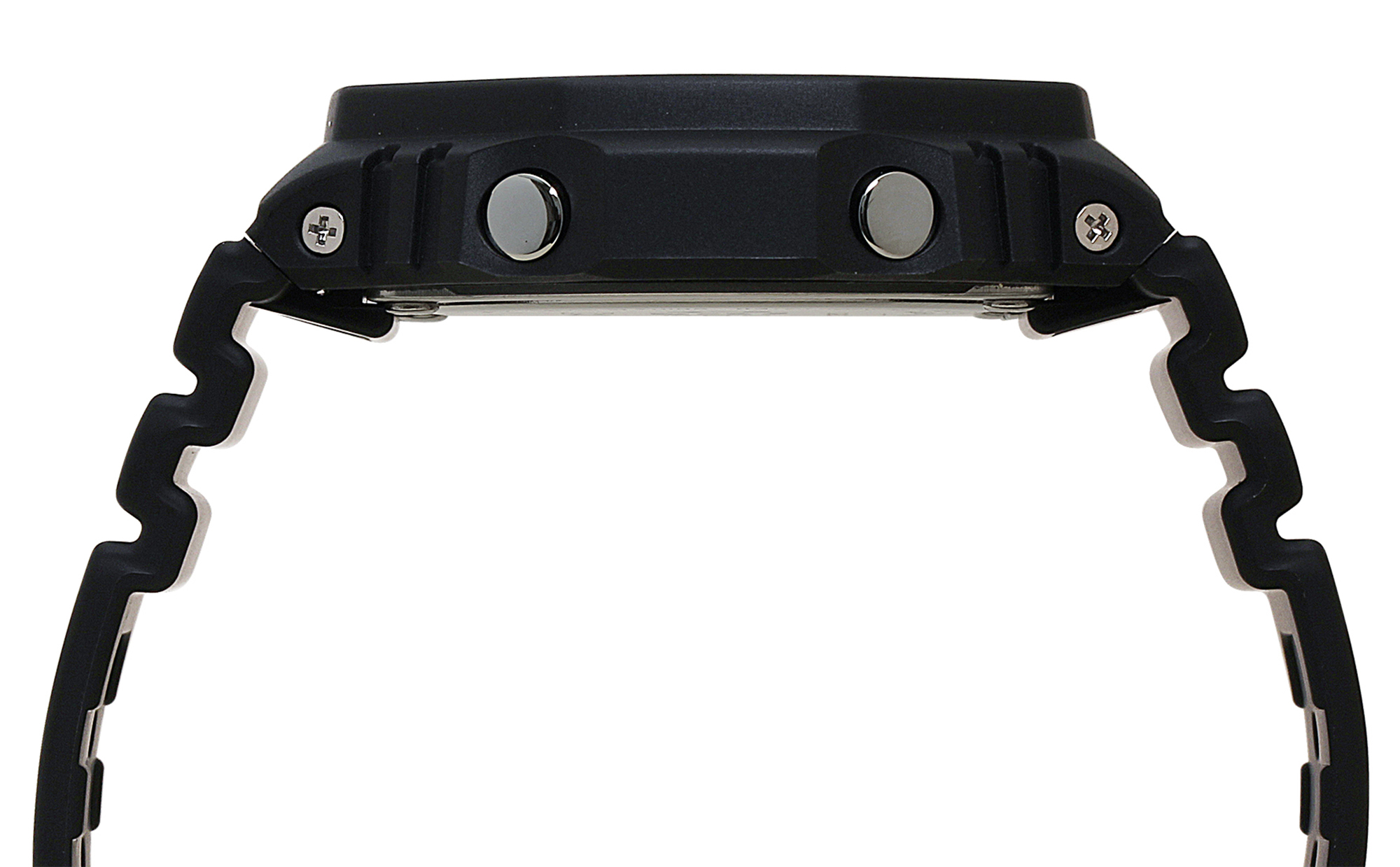 At 45.4mm-wide and 11.9mm-thick, the resin cases of the Casio G-Shock GA-B2100 series are nearly identical to the original GA-2100 in size despite packing in additional components. The GA-2100’s broad octagonal bezel, ridged case sides, and integrated lugs are all present and accounted for, with a quartet of colorways that harken back to the original G-Shock color offerings in images. The GAB2100-1A is the most traditional of the group, with a clean black-on-black color palette that traces all the way back to the very first G-Shock models. The GAB2100C-9A’s highly saturated hazard yellow case is another early G-Shock series staple, and an ideal pairing for those looking for a bolder statement on the wrist. For the GAB2100-2A, the brand opts for a muted, desaturated navy blue, giving this familiar design a more reserved character on the wrist. Likewise, the GAB2100-3A’s deep forest green case offers a more mature look in initial photos, and should pair well with military-inspired styles. All four new models offer Casio’s rugged Carbon Core Guard inner case for added shock protection and durability on top of the immensely rugged G-Shock standard, and Casio rates each of the four for a hefty 200 meters of water resistance. 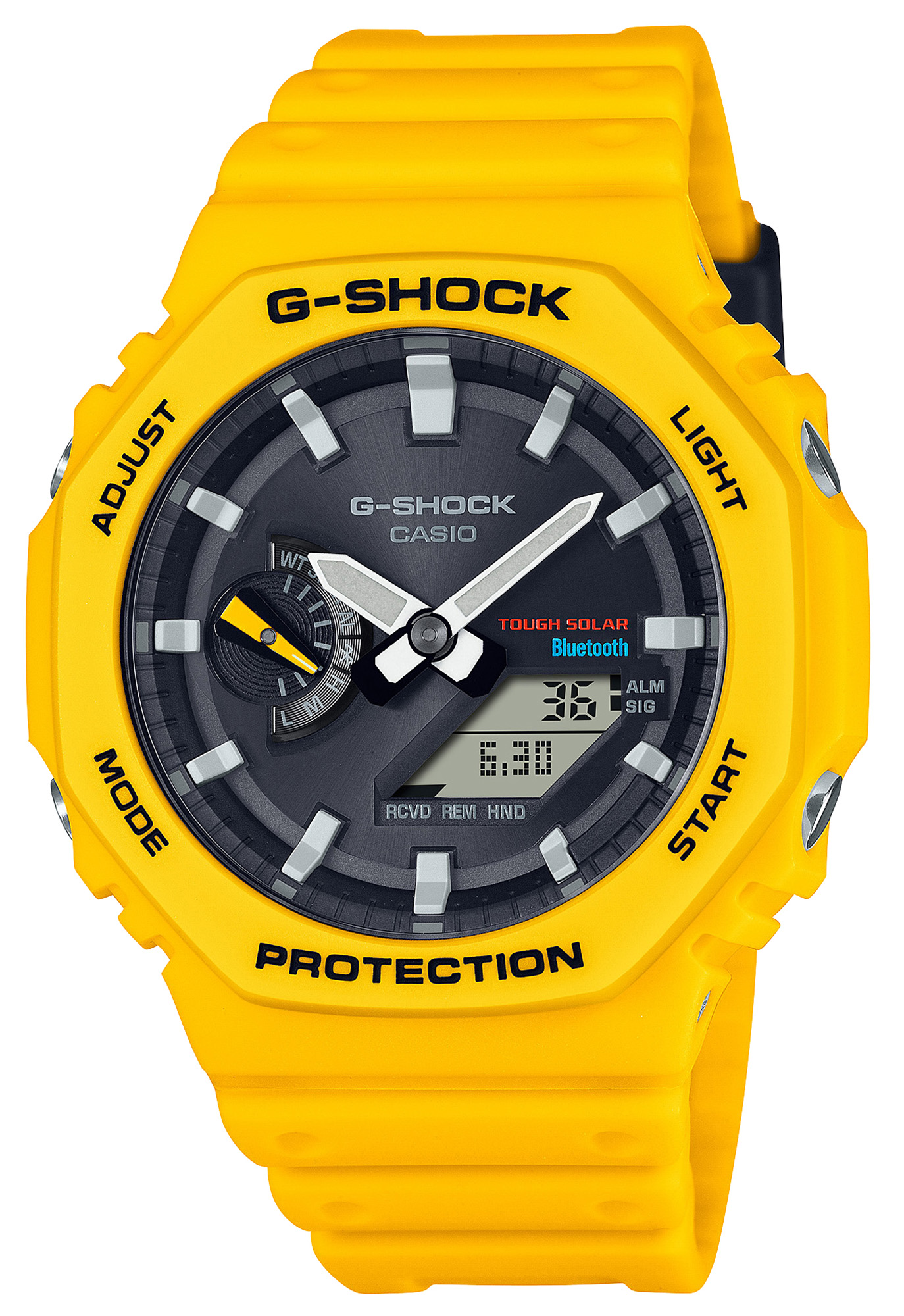 As with the cases, the dials of the Casio G-Shcok GA-B2100 series are nearly identical to their “Casioak” stablemates in images, but here the brand adds a layer of premium finishing that elevates these models above their predecessors. All four models use a black sunburst base dial surface, adding a pop of texture to the familiar layout that works in conjunction with the brand’s innovative Tough Solar charging system. Each model adds its own distinctive touch to the formula, however. The GAB2100-1A’s striking red multifunction subdial hand at 9 o’clock gives the most traditional colorway of the group a unique highlight in photos, while its sloping applied indices in medium gray keep the design simple and focused. The more vibrant presentation of the GAB2100C-9A’s case is echoed by a case-matching 9 o’clock subdial hand and a wide sword handset in white, along with paler indices to match the lighter colorway in images. For the GAB2100-2A and GAB2100-3A, the brand takes a darker monochrome approach in images, with inverted LCD subdials at 5 o’clock alongside case-matching hands and indices in muted navy blue and olive drab, respectively. 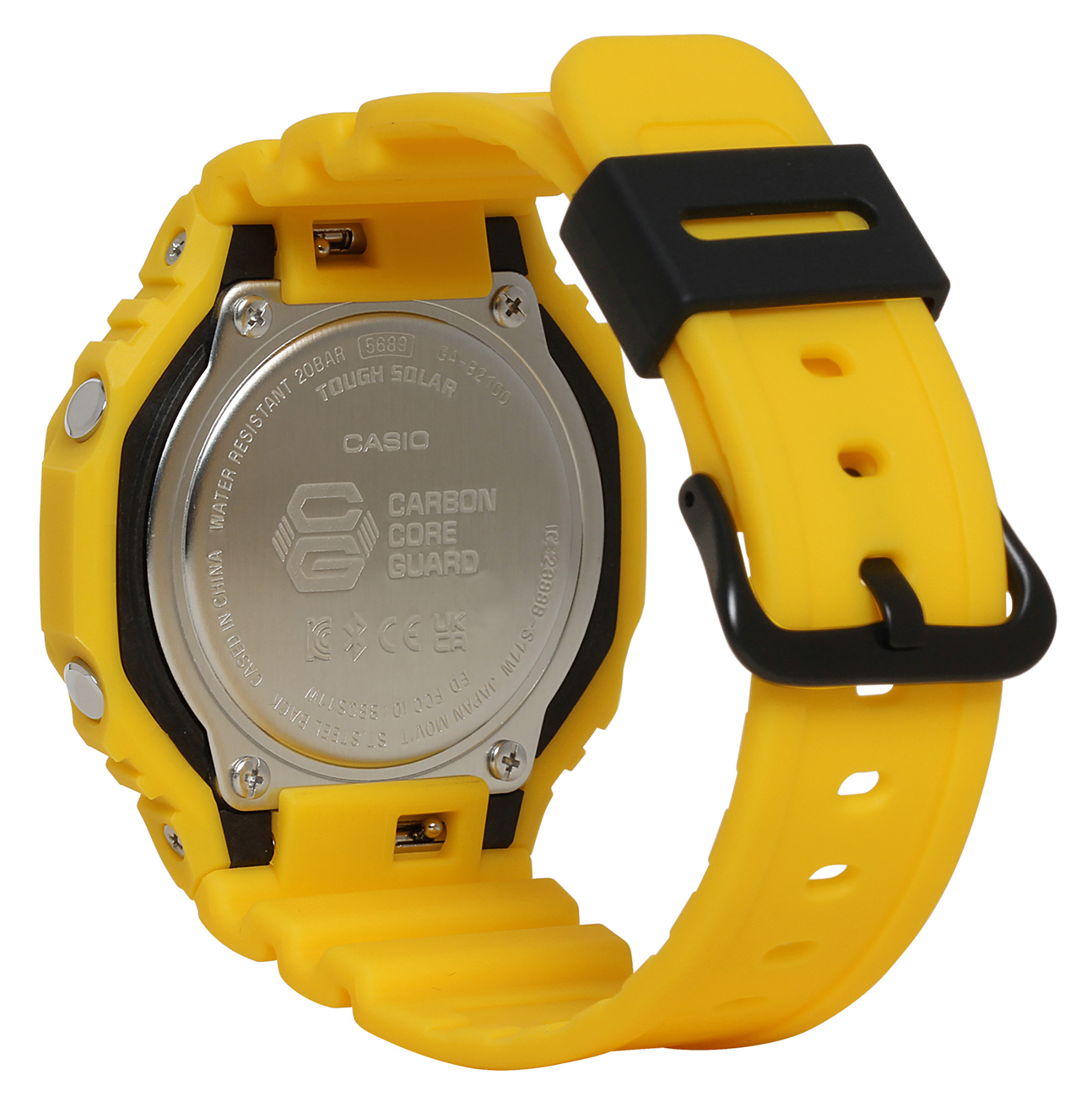 Casio powers each model in the G-Shock GA-B2100 series with its in-house Module 5689 quartz movement. Like all G-Shock movements, the Module 5689 packs in a broad spectrum of complications. In addition to the standard GA2100 series’ suite of a world timer complication, a 1/100-second chronograph, a countdown timer, five programmable daily alarms, and LED dial illumination, the Module 5689 adds solar battery charging and smartphone linking via Bluetooth to allow for quick and easy time setting. To complete the package, each model in the Casio G-Shock GA-B2100 series is paired with a case-matching accordion-style resin strap. 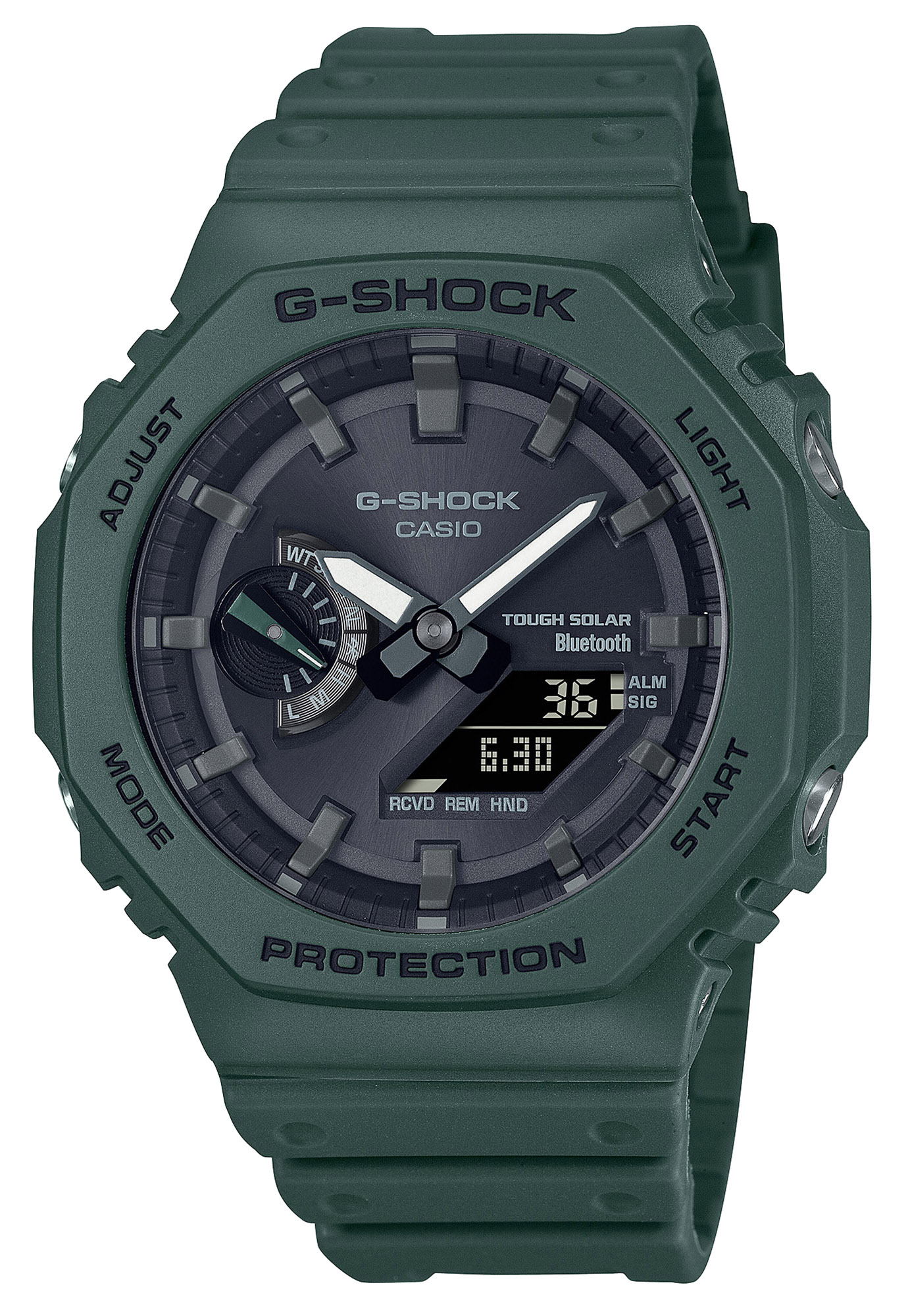