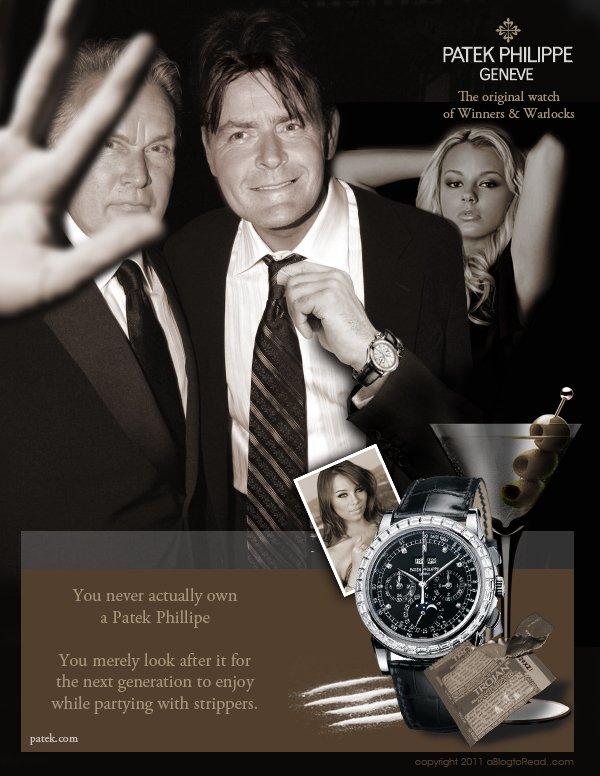 April 1st, 2011 Switzerland. Historic and prestigious Swiss watch brand Patek Philippe has just unveiled a new member of their popular “father and son” watch ads. The advertising campaign that seeks to promote the values parents bestow upon their children and the longevity of Patek Philippe timepieces makes a bold new statement on a previously unexplored area of the brand’s personality. The new ad features father Martin Sheen with son Charlie Sheen – both known watch lovers. It has further come to my attention that Charlie Sheen has prominently displayed in the media as of late.

Ariel Adams: Mr. Stern, thank you so much for talking with me today about this new ad. It represents a very different approach for the brand. What is the intent behind it?

Thierry Stern: Your questions are appreciated. Patek Philippe has traditionally been a brand with an excellent reputation among watch collectors for our beautiful movements and because many consider a Patek Philippe to be the epitome of the “classic watch.” We are extremely proud of this, but wanted to focus a bit more on the people who love Patek Philippe.  Well-known, real people who wear and enjoy Patek Philippe with unique lifestyles. There is also a message here about the type of person that chooses a Patek Philippe over other timepieces.

AA: What type of people choose a Patek Philippe over other timepieces?

TS: I think Charles summed it up best when calling them “Winners.” I didn’t at first think the statement referred to my family’s brand, but later it connected. Mr. Sheen is an avid Patek Collector owning several very rare pieces. He is a very discriminating man who strives to surround himself with the best things. He could have any watches, and yet he refers Patek Philippe. Martin Sheen of course is a living legend. I think that people consider him to be a bit more reserved and perhaps more socially proper when compared to his son – really the classic type of Patek Philippe wearer that represents a very large amount of our clients. He is a very important man – you know, he played the United States President. These men fit very well into our father and son theme that has been a cornerstone of our messaging campaign for a few years.

AA: What about Charlie Sheen lifestyle? Are you suggesting that he represents the typical Patek Philippe owner?

Patek Philippe watches don’t always have the perception of being a watch you can have a good time with, and I wonder if Patek Philippe has missed out on a lot of ‘good times.’ Charles’ lifestyle is a sort archetype of extreme living. A lot of brands like to connect themselves with sports and military events, or other historical occurrences. We’ve never had to place a Patek on Charles’, and yet he has played roles as soldiers in at least a few wars, and as a Baseball star. I am not familiar with his entire Baseball career, but it must be impressive as he is always wearing jerseys and has all sorts of items he took from Baseball stadiums around his home. So we get the traditional values brands seen with Charlie as well as Martin. On top of that Charlie adds what I like to call “an extreme passion for endless entertainment.” He is a good time loving man, and I don’t think a Patek watch always needs to be associated with a suit or something you buy at Brooks Bros. Patek Philippe over the years has released thousands of coveted references, each of them can appeal to a different lifestyle or situation.

AA: Who conceived the idea for this campaign?

TS: I think it began rather naturally. We’ve know Mr. Sheen for years now but since we did not use celebrities in our messaging campaigns we couldn’t really make anything of it. A few weeks ago when Charlie began to receive a lot of media attention, and kept talking about how would not reveal the brands of things he was eating or drinking because they would not pay him, I began to think. Even though he hides the brand of many things he uses, he proudly displays his Patek watches because of his sincere admiration for the brand. He even has a rare watch that apparently displays warlock time – I didn’t even know we made a watch like that. After that we gave him a call to discuss some ideas and this was the outcome.

AA: Are you concerned about the fact that Charlie Sheen will be on your ad but recently lost his job?

TS: We did give that point strong consideration. At first I agreed with you that it did not look good. Eventually I came around to the idea that it was a good thing. Patek Philippe owners are successful winners who excel at winning, a fact that Charles is constantly reminding the world. We don’t want a man on our ad who just lost his job, but we do want a man that just became his own boss. With so many people in the world currently transitioning into these new roles, I think his situation will resonate well the people who see these advertisements.

AA: What Martin Sheen as keen on the idea?

TS: Marty is really a good sport and father. He does so much to support his son even though he disagrees with a lot of what he does. He saw how excited his son was to work on this project that he agreed to accompany Charlie here to Switzerland if we agreed to do all business at the substance abuse rehabilitation clinic of his choose – he chose a beautiful place near Lake Geneva, the food there is excellent.

AA: Tell us about your relationship with the Sheens and what they are like. When did you first encounter them?

TS: You don’t need me to tell you that the entire Sheen family is made up of very special people. I would say that I know Charles the most as I have known him the longest. He approached Patek Philippe several years ago in need of service for a rare 1950’s model. He sent in the watch with a broken crown and made it a point to call the service department to explain what happened. Our clients never cease to amaze me with their stories. Charles shared with us that during a particularly vigorous instance of copulatory delight the foot of his partner thrust against the side of his Patek by pure accident. This normally would not have been an issue, but in addition to enjoying a Patek Philippe watch on his wrist during coital activity, Mr. Sheen enjoys it when his partners do not remove their 6 inch stilettos. A remarkable mishap to have a high heel damage an item of high horology.

AA: Has Charlie ever visited the Patek Philippe manufacture here in Switzerland?

TS: Yes, in fact he visited us on a few occasions. I meet with him myself when possible and I am always impressed by his love of watch making as well as Switzerland. He often speaks of sport and skiing, frequently asking me where he can score the best white powder. Charles get so excited when talking about doing lines with snow. Truly an honorary member of the Swiss people. We have only one rule for Mr. Sheen when he comes to visit, and it merely involves his choice of female company. Charles has excellent taste in women no doubt, but on my request he is not to bring women to the manufacture who are too easy to find without clothes on when searching on the internet – it is very distracting to our hard working staff.

AA: Are you at all worried that the message in the ad seems to promote illegal activities?

TS: There are always concerns with how people are going to interpret ads. If you are the type of person to imbibe with narcotics this ad isn’t going to reinforce or prevent that. If anything, the focus here is on Charlie’s particular lifestyle. He actually said to me, that even if you don’t get high with drugs, strippers who are themselves high on drugs are certainly more fun. That is my personal interpretation of the message. I don’t really want people to get carried away with these little details anymore than Charlie does. It is like having a talk with him about the difference between a stripper and an escort, you simply don’t get a straight answer out of the man.

AA: Are there plans to involve the Sheens in other campaigns for the brand?

TS: Not at this time. We tested a visual component in the form of a video with Martin and Charlie. Martin walked out of the room, and Charlie spend a lot of time talking about trolls and the people he is winning more than. It didn’t go very well with focus groups.

AA: Mr. Stern, this sounds like a really exciting campaign to be a part of. I just have one more question. Where is the first place people can see this new ad?

TS: Ah yes, excellent question. We have arranged for a very special placement for the debut of this ad – it will actually be in America. We have arranged for a large billboard style banner that will be prominently displayed outside the entrance of the next Adult Video News Awards in Las Vegas. Our marketing people feel that women who attend the event should be more familiar with Patek Philippe and introduce the brand to their clients and colleagues. Its going to go global after that, and LIVE FROM NEW YORK ITS SAT…

…No it isn’t Saturday Night, nor is it live or in New York. Thanks for enjoying this April Fool’s day joke. Patek Philippe, I’d like to thank you for being a good sport and putting up with (and hopefully enjoying) this satire. Thanks to Dangeruss, the designer of the mock-ad, and special thanks to fellow watch writers Elizabeth Doerr, Peter Braun, Mike Disher, Thomas Wanka, and Roberta Nass who helped with the inception of this idea.