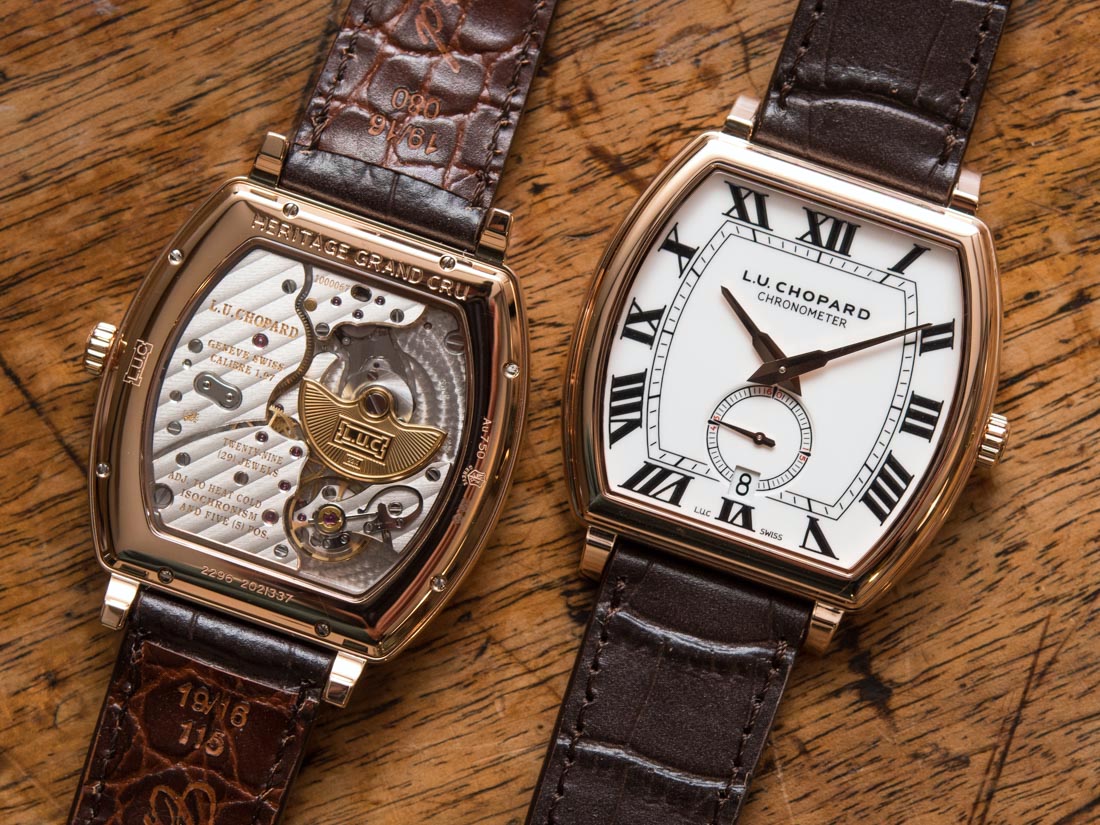 The Chopard L.U.C Heritage Grand Cru watch is a successor to the brand’s first L.U.C XP Tonneau watch which was released in 2001. This latest in Chopard’s deservedly vaunted L.U.C division is named after the distinction given to the most superior grades of wine produced… Though, how these two distinct fields of fine living resonate we shall try not only to explain, but also discover ourselves. Reminiscent and similar to the Chopard L.U.C XP Tonneau watch, the Heritage Grand Cru is an unusual piece from Chopard based on case shape alone – more on that in a bit. A glance at its spec sheet gives away an automatic, tonneau-shaped, 3.3mm thick movement wrapped inside an 18kt rose gold, tonneau-shaped case that measures just 38.5mm by 38.8mm, coming in at a slender 7.7mm thick. The curved middle section of the case is vertical satin brushed while the bezel and area surrounding the exhibition case-back is polished. Past the domed anti-reflective sapphire crystal is a white porcelain-type dial with black Roman numerals, with a minute track surrounding the center of the dial. At 6 o’clock is the small seconds sub-dial, which is snailed and has a gilded seconds hand. The hour and minute hands are dauphine style and are also gilded. It is not unusual for gold hands on watches to be polished to a point where it’s not even worth asking about legibility in higher-light conditions. The gilded, i.e. plated gold hands here are vibrant but are quite legible in the sunlight and at various angles. Set against the glossy, cool porcelain dial, the dauphine-fusée hour and minute hands are properly angular and thoughtfully proportioned for a tonneau-shaped case. Fusée means rocket in French and this specific type of dauphine hands is Chopard’s own – something I continue to very much enjoy regardless the case shape and dial style they install it on. Their faceted sides and perfect length give them plenty of volume – and no watch can be taken seriously without proper hands. At 6 o’clock, you can see the seconds sub-dial with a hand that is similar to the hours and minutes hand in that it’s also gilded, but it is not done in the same style. I appreciate Chopard’s own-designed and proprietary font and red color used to indicate the time increments at 15, 45, and 60 and even though I wasn’t sure about the markers in between the digits at first, it’s something I quite like now. Also, a notable detail is that these markers – both the numerals and the little points between them – are so small, even with my good near-sight I could barely take them out. Additionally, as is usual for so many L.U.C watches, there is the date window placed at the bottom of the seconds sub-dial, blended into the minute track to minimize its effect on the dial’s aesthetics. “To date or not to date?” – that is always the question, but I can appreciate Chopard sticking to its idea of adding this extra bit of functionality. Again, to be taken into consideration is also the fact that this is one of the smaller date windows – consider the sub-40mm size of the watch and the proportionally yet smaller date window, and the distraction-factor really is minimized. The exhibition case-back allows a view into the Geneva Seal approved 97.01-L Calibre movement that, like the 97.03-L found in the L.U.C Tonneau watch, is a tonneau-shaped automatic movement. A 22ct gold micro-rotor drives the two stacked barrels built using Chopard’s Twin technology, providing a total of 65 hours of power reserve at a frequency of 4Hz. The movement measures at 28.15mm by 27.60mm at just 3.3mm thick and is made of 197 components, and has 29 jewels. Chopard calls the L.U.C Heritage Grand Cru “the only tonneau shape watch wound by an automatic movement” – though the Clé de Cartier, several Richard Mille pieces, and even some Franck Muller models spring to mind as other watches that fit this description.The Parmigiani Fleurier Kalpa Hebdomadaire is indeed a tonneau shaped watch with a tonneau shaped movement, but one that is a manual wind, but the RM 67-01 (hands-on here) is very much a tonneau-shaped movement in a tonneau watch. The bridges are adorned with a refined Côtes de Genève pattern and there is beveling and polishing work throughout. Of course, this movement boasts the Poinçon de Genève – also known as the Geneva Seal or Hallmark of Geneva. The Geneva Seal is a more rare quality certification, reserved only for watches produced in the canton of Geneva. Refreshed and rendered more stringent a few years ago, the Geneva Seal now includes a set criteria regarding not only the aesthetic qualities of the movement, but also that of the case, as well as testing performance claims including accuracy, power reserve, water resistance, and all functions. Getting back to something I mentioned at the beginning is the topic of the ‘Grand Cru’ designation of the watch. The name will eternally remain engraved on the case-back – and will likely force sales reps and owners to elicit the same confused and somewhat tortured explanation that a man with the most distinguished and elevated taste in wine would be the man who wears this timepiece. There actually is a bit more to it than that, it just isn’t really communicated about. The only way I can look at this seemingly irrelevant engraving and take it as something meaningful is through considering it as the Scheufele family shyly peeking through the thick Chopard curtain for a moment. Over half a century ago the Scheufele family purchased Chopard, a dying company with just a few employees left, and built it into one of the most successful and, to date, independent luxury jewelry and watch brands around. Chopard’s watch business – and, more importantly from our perspective, the quality Chopard L.U.C watches – is the brain- and love child of Karl-Friedrich Scheufele, a well-spoken, humble, second-generation member of the Chopard-Scheufele era.

It was his idea and project to make Chopard into a vertically integrated and, hence, safely independent, watch manufacture – their first movement they produced in 1996 and since then have been on a roll, with self-developed chronographs, insanely complicated perpetual calendar chronograph, “All In One” watches, and simply the best sounding minute repeater to date. All this, and yet the Scheufele family remains almost totally behind the scenes of Chopard – in fact, this “Grand Cru” designation is the only occasion I can think of when it’s something personal to them that has been added to a Chopard watch. It’s the most shy and timid way, as they are placing a reference to something that’s their personal hobby and passion on a Chopard watch. The related story is that the Scheufele family have recently acquired a vineyard and chateau – after some 20 years of research, to fulfill their passion for wine-making. In fact, I have gotten to know Karl-Friedrich Scheufele as an obsessive perfectionist for his passions, namely watches and wine, as well as vintage cars. The motivations that led him to pursue the vineyard basically provide the same kind of drive that led to his creation and success of the Chopard L.U.C division. However, Chopard should ideally find a way to credit the Scheufele’s for what they have done to make Chopard into what it is and turn this into a personal, relatable element – but, with the best will in the world, I seriously doubt the above-mentioned story will be received and then forwarded onto the customer by even the most motivated Chopard sales team. Perhaps if more people were educated about the Scheufele family and their role in making Chopard what it is today, there would be a stronger link between this watch and how its identity is both presented and marketed. In his brief explanation on this note, Mr. Scheufele said the link he sees and enjoys between watch- and wine-making is that both take a very long time to do well, require a lot of flexibility, as well as the understanding and utilization of both traditional and modern know-how. A main difference is how mother nature can at the last moment strongly affect the quality of the wine – not so much that of the watch, he joked (at this moment I could sense how mother nature and his own lack of compromise in seeking quality have put him through some struggles while trying to get their Bergerac vineyard up to his standards). The Chopard L.U.C Heritage Grand Cru is an attractive watch that legitimately presents a unique offering in a classic style tonneau watch that achieves both a slim case and an automatic movement. It’s a shame to see a watch that gets all (or most of) the major and minor details right but just stumbles a little in messaging due to how subtly its identity is communicated. The L.U.C line has always flown under the radar, letting the watches speak for themselves. The Chopard L.U.C Heritage Grand Cru is an attractive watch that legitimately presents a unique offering in a classic style Tonneau watch that achieves both a slim case and an automatic movement. It is priced at 22,300 CHF. chopard.com