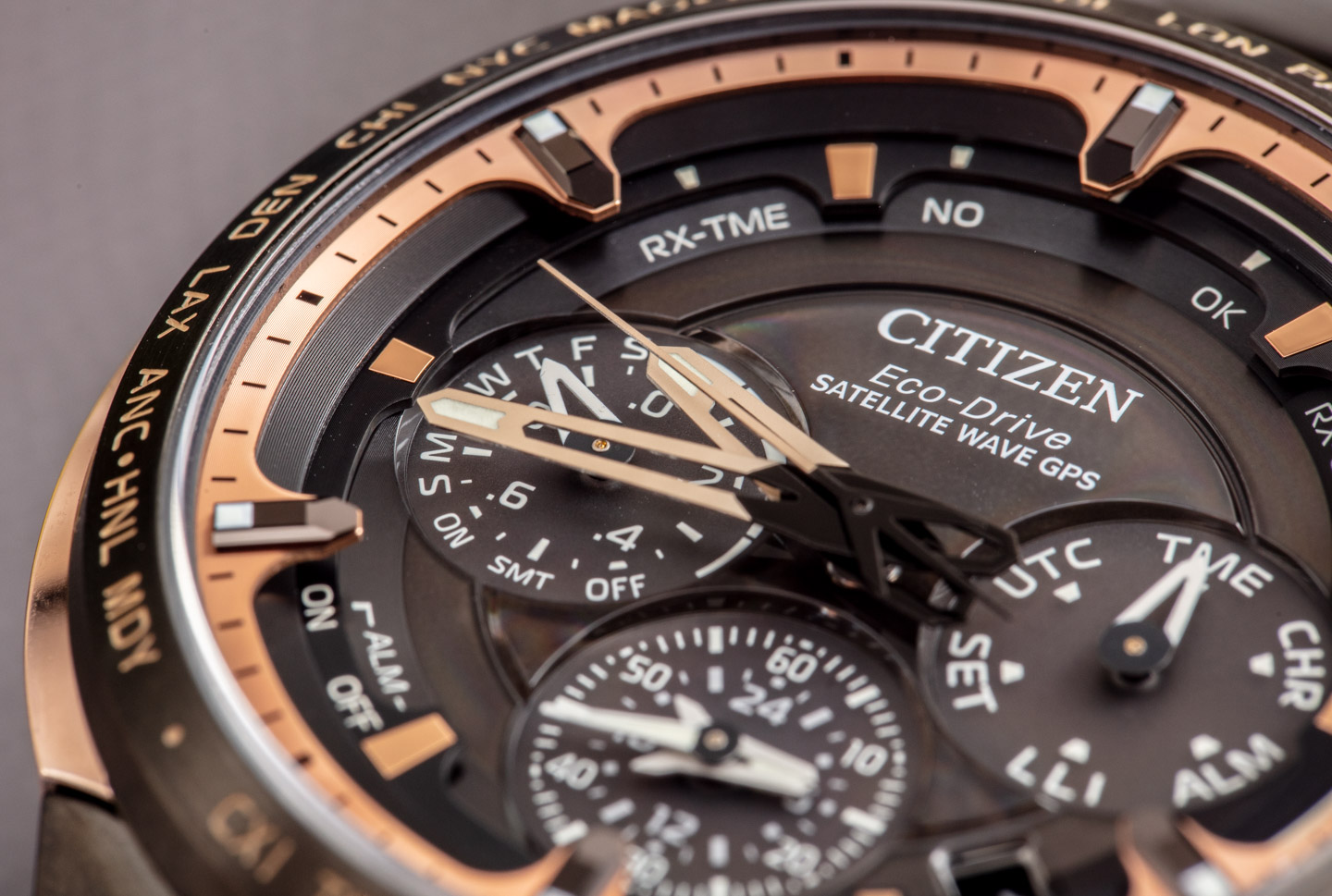 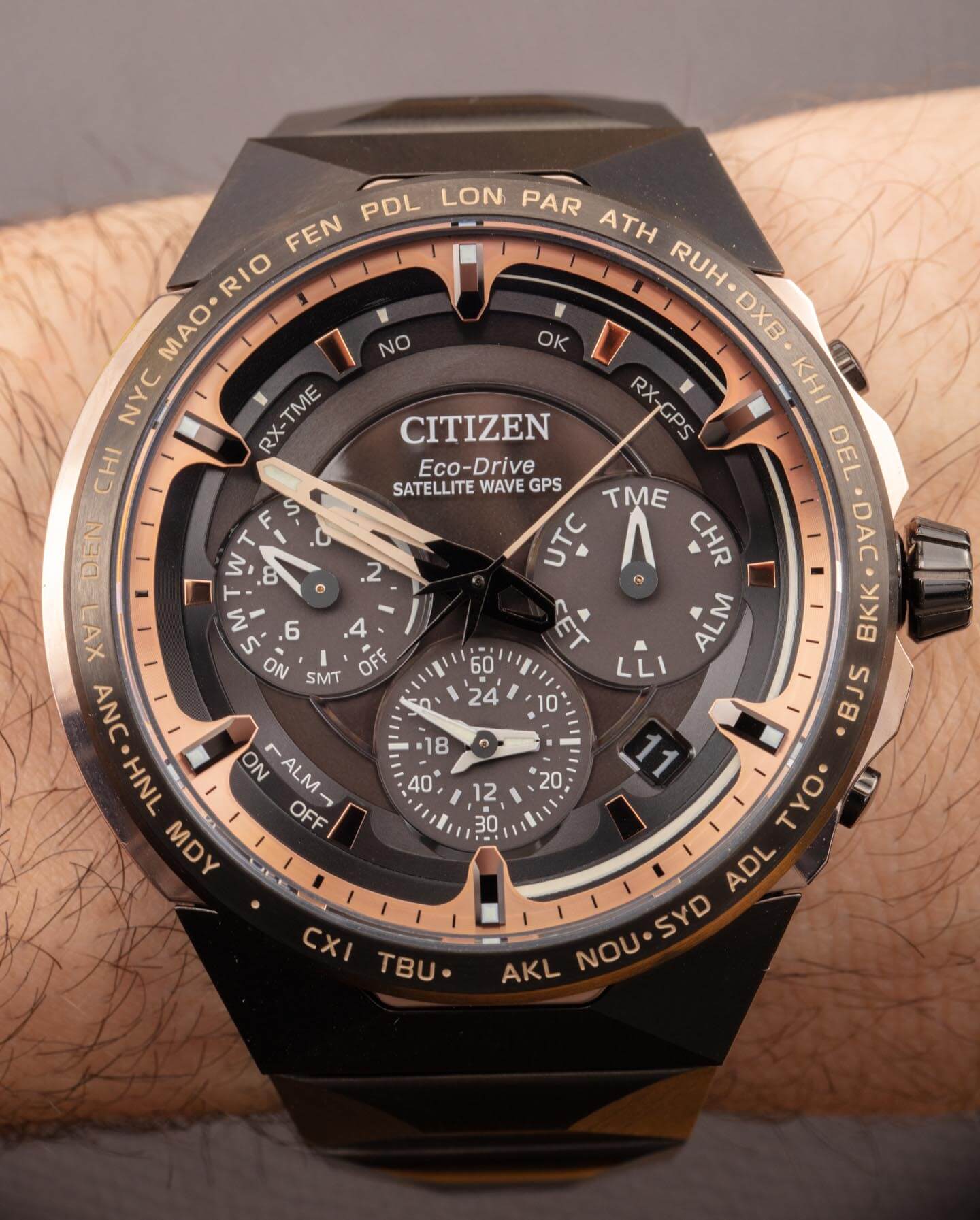 aBlogtoWatch recently debuted this novel limited-edition Japanese Citizen watch that celebrates the 50th anniversary of Citizen’s first titanium watch. The instant watch here is the 2020 (deep breath, as it is a long name) Citizen Titanium Technology 50th Anniversary Limited-Model Satellite Wave GPS F950 reference CC4025-82E — and it is limited to 550 pieces. More on it in a moment. What of titanium? It was 1970 when Citizen released what was apparently the first commercially available titanium in the (then) rather exotic metal made famous by its use in aerospace technology.

Titanium made sense as a watch case material when Citizen first used it for the Citizen X-8 watch because of its light weight, overall strength, and friendliness to human skin. Since then, Citizen has become one of the world’s dominant players in democratizing the use of titanium for watches beyond merely high-luxury timepieces. Citizen almost single-handedly introduced titanium as a watch material available in watches priced at only a few hundred dollars. Citizen didn’t stop there; as part of its focus on ever-improving its products, the engineer-run company also developed a series of proprietary techniques that render some of the best titanium on the market. 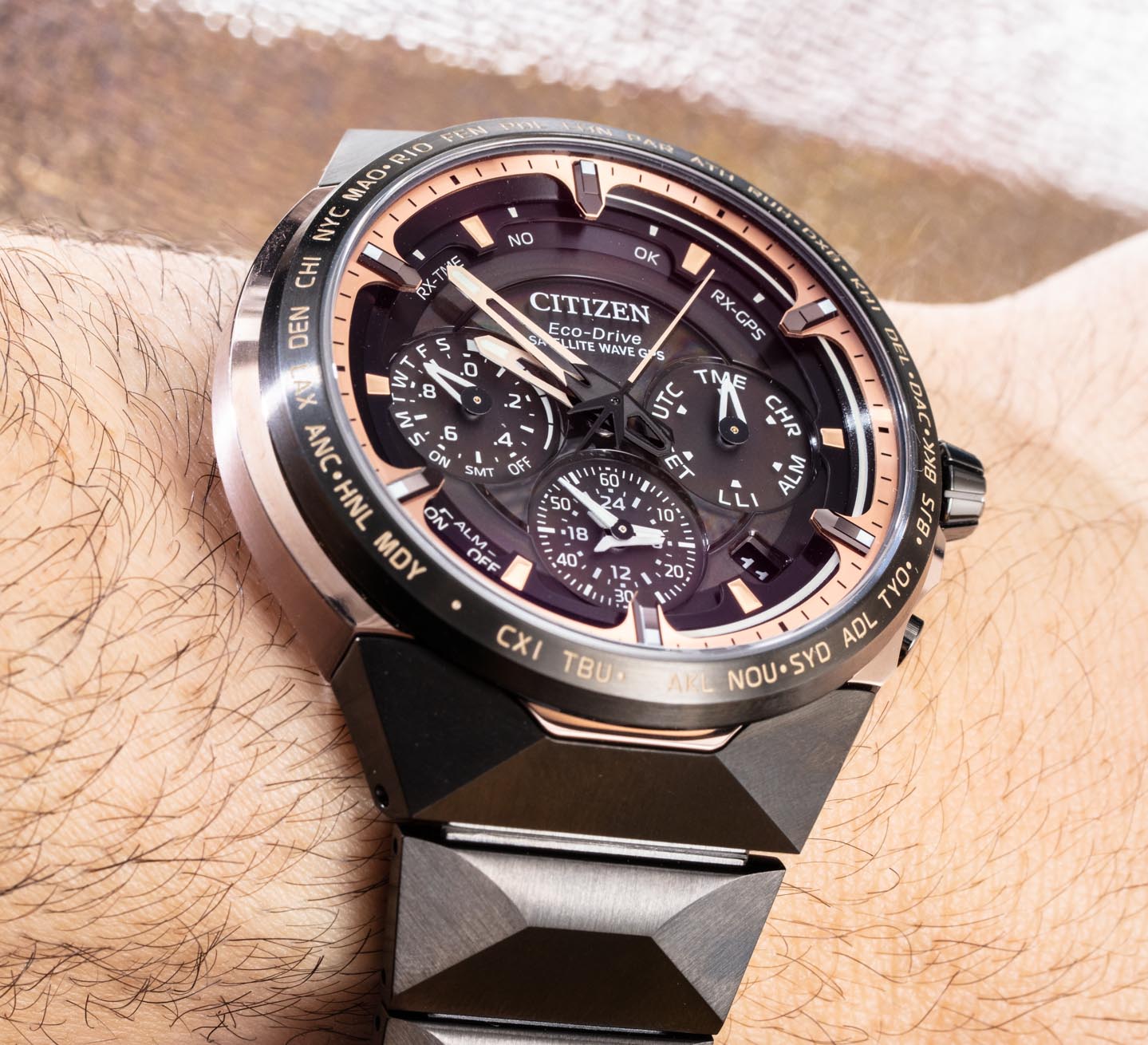 Citizen Super Titanium is the result of Citizen’s great efforts in making titanium far more scratch resistant and tougher when it comes to wear and tear. Super Titanium is also at the heart of this particular Titanium Technology 50th Anniversary limited-edition product. That said, even though this particular timepiece is a real luxury item, what makes Super Titanium so super in my eyes is that Citizen is able to use it for a number of watches that start at just a few hundred dollars.

In addition to the “Sakura” pink gold-tone coated Super Titanium that contrasts with the anthracite tone of the rest of the Super Titanium case and bracelet, this product is also meant to celebrate Citizen’s accomplishments with GPS movements. Each of the three major Japanese watchmakers have their own GPS watches — a focus that is almost entirely Japanese (when not taking into consideration smartwatches). The F950 movement is an interesting system that represents a stack of systems Citizen has made over the years. In that regard, Citizen’s movements are similar in principle from those at brands like Casio, where ongoing improvements and new features stack up over time. 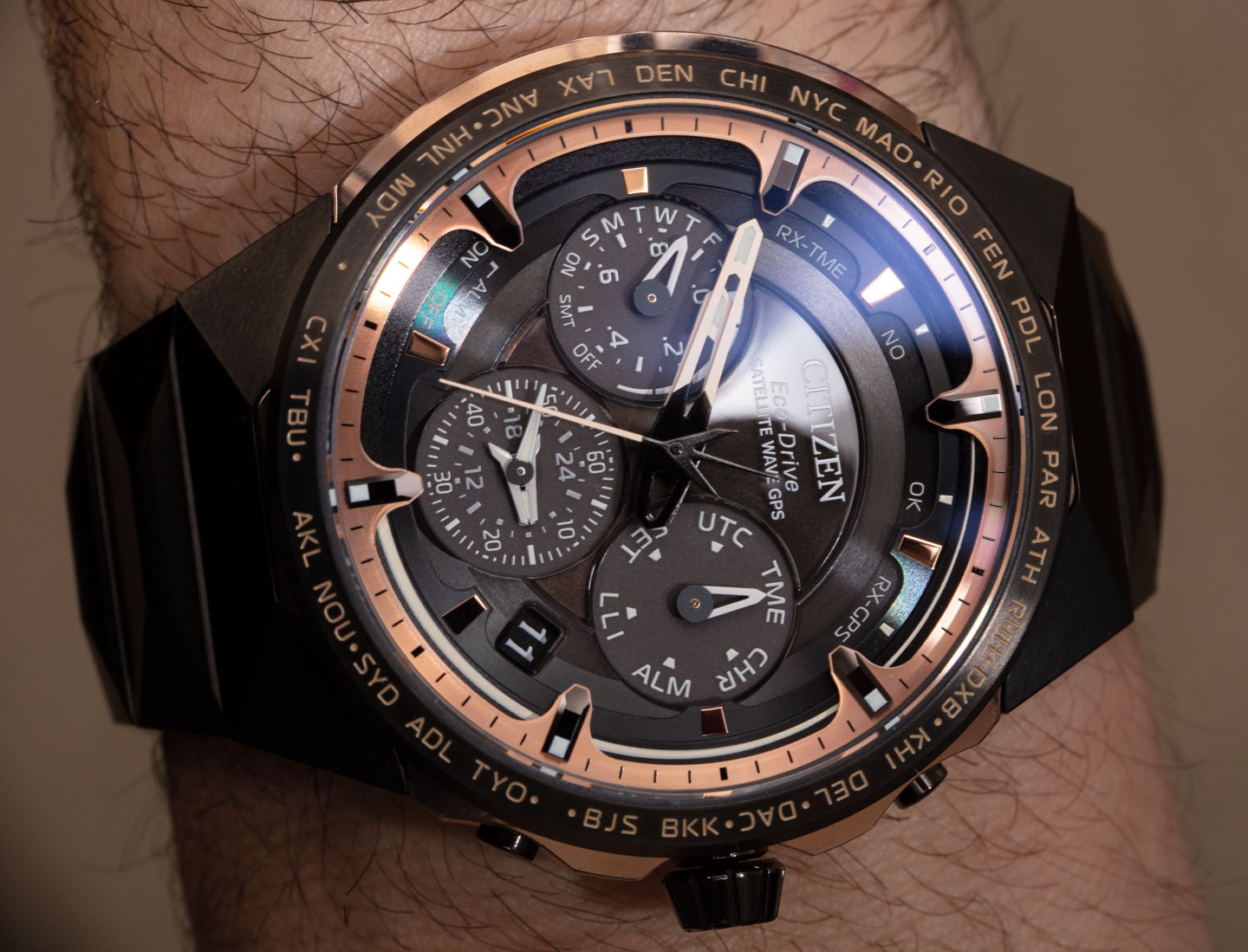 The movement is Eco-Drive light-powered, meaning it does not require battery changes. That, and its ability to automatically update the local time from GPS signals, makes it an authentic “set it and forget it” timepiece (a particular goal of many Japanese timepiece designers). The F950 movement also uses a function-selector system when the crown is pulled out in its first position. This means that the hands on the main dial can be reconfigured to offer a few displays, including the local time, world time, chronograph, and alarm. The dial also includes a full calendar as well as a power-reserve indicator for the battery life. Finally, the dial also has a few indicators that you use when manually syncing the watch with a GPS signal or to check if it successfully synced the last time around.

While the Citizen F950 Eco-Drive GPS movement is busy, it is highly functional and pretty logical one you pass a small learning curve. What I really like is the information available to the viewer at a glance and the relatively fast signal receiving times I’ve experienced from the movement when I have tried to connect to GPS signals manually. The F950 is not a brand-new movement — it would have been nice if this anniversary piece also included an update to the movement, but the F950 is the latest in a series of improvements on the GPS watch theme by the brand) 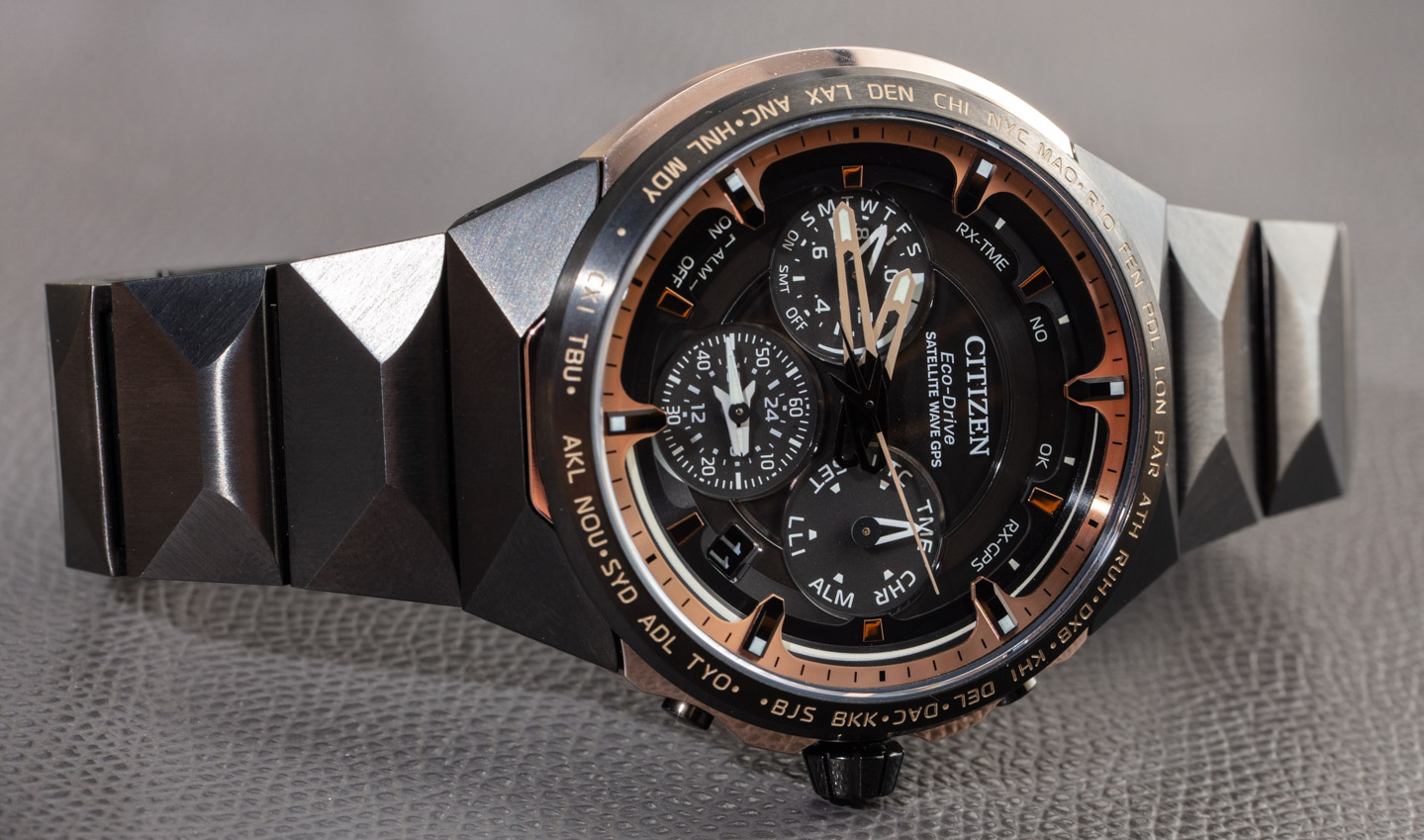 In 2015, when I reviewed the Citizen Satellite Wave F100 watch, I wondered what might come after it. Five years later, we see a more luxurious and well-equipped GPS watch from Citizen, and one that attempts to make a more distinct mark on the luxury market. For me, this latter element is what really defines the Titanium Technology 50th Anniversary Satellite Wave GPS F950. It isn’t trying to be the next mainstream-appeal Japanese gadget watch, but rather a visually assertive lifestyle item that combines an effective operating system and combines it with a slick design and fancy materials.

Speaking of design, the 47.5mm-wide Super Titanium case (it doesn’t’ feel so large on the wrist, given the integrated lugs) is a handsome but quirky wrist treat that combines the merits of a Japanese tool watch with the visual interest of a fashion piece. While the price is certainly higher than the previous generation of Satellite Wave F950 models, Citizen has clearly applied more investment to overall quality and materials. This is an even more premium flavor of an already premium collection with the Citizen family. Likewise, at Seiko, the competing Astron GPS watch has been climbing market categories with higher prices but with accordingly more “beautiful-feeling” products. 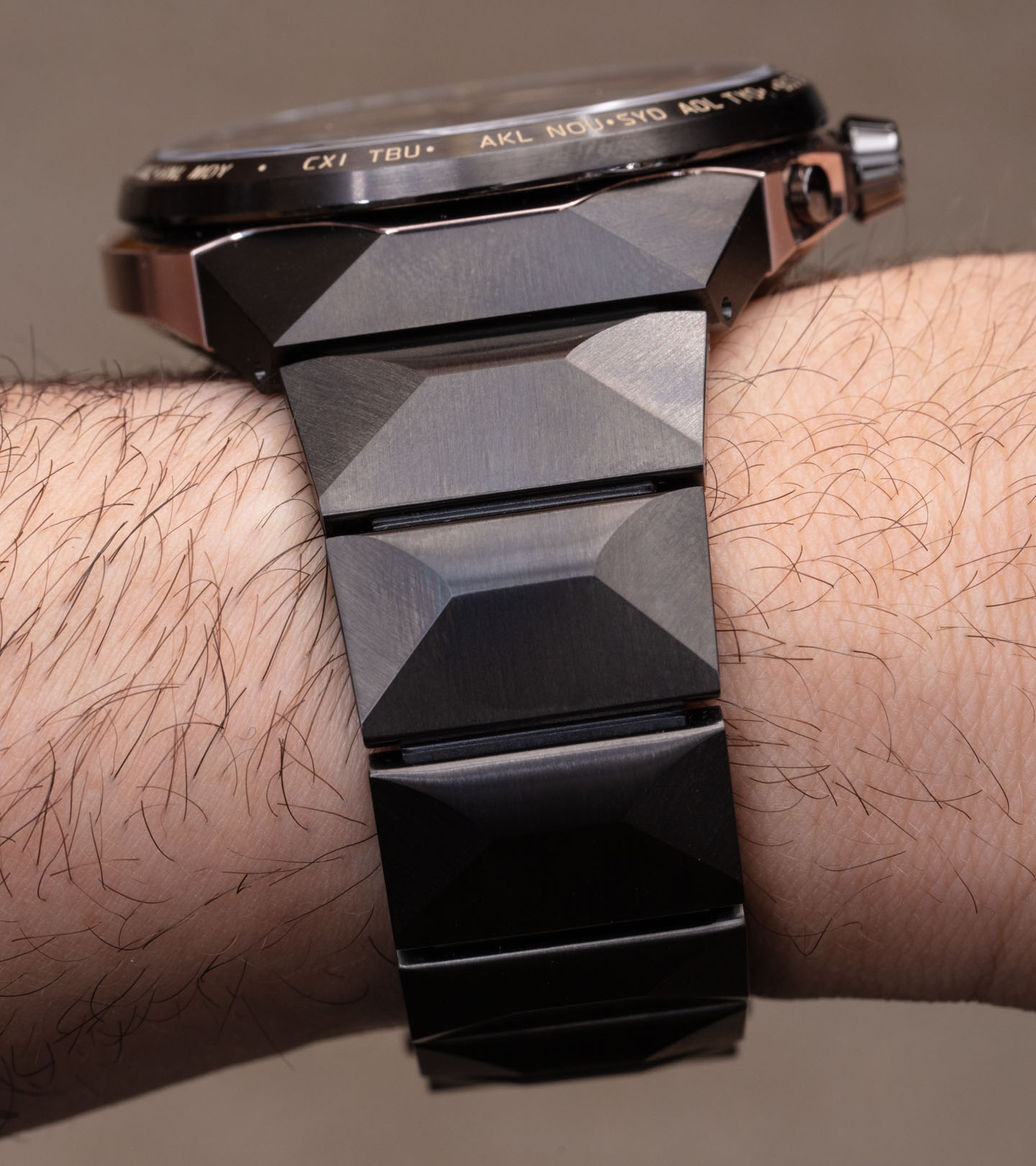 Appreciation of the Titanium Technology 50th Anniversary Limited-Edition Satellite Wave GPS F950 watch’s dial is a matter of taste. With that, the quality is excellent — and begins with the finely AR-coated sapphire crystal. Citizen design the hours markers to exist on two planes, which makes for a stimulating effect and actually doesn’t harm legibility. (Note that the particular watch I am shooting for this article is a pre-production prototype. Citizen has requested I inform you that the final watches will have a slightly different set of markings in the bottom of the left subdial.)

Not all one-piece link bracelets are comfortable to wear on the wrist, but Citizen did a great job here. The inside of the bracelet is actually more three-link in style, but with the external look of having a single, roughly pyramid-style link. The angles on the integrated, tapering bracelet are attractive, and with its particular design and color also somewhat masculine in aesthetic. I think it’s a good look for the watch, but it isn’t something that could probably be made in high volume given the many individual titanium pieces that need to be machined and then treated.

The message Citizen is sending to consumers and the watch industry, in general, with this Titanium Technology 50th Anniversary Limited-Model Satellite Wave GPS F950 watch is that the brand is now seeking to re-approach luxury products as an area to feature Super Titanium. Available in several colors and with legendary durability, Super Titanium is a trademark that Citizen deserves to go alongside its other accolades. While for some legacy Citizen fans, the reference CC4025-82E will be seen as expensive and not as technologically novel as, say, the Citizen 0100, it is a satisfying product that promotes a luxury side to the brand that the company is slowly engendering once again. It also happens to look quite cool on the wrist. Price for the limited edition of 550 pieces Citizen Titanium Technology 50th Anniversary Limited-Model Satellite Wave GPS F950 watch is $5,000 USD. Learn more or order at the Citizen website here.