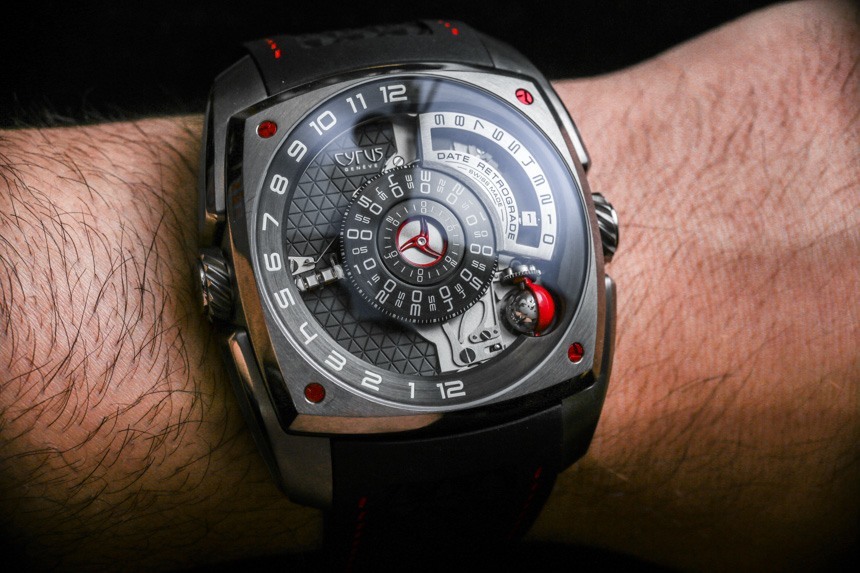 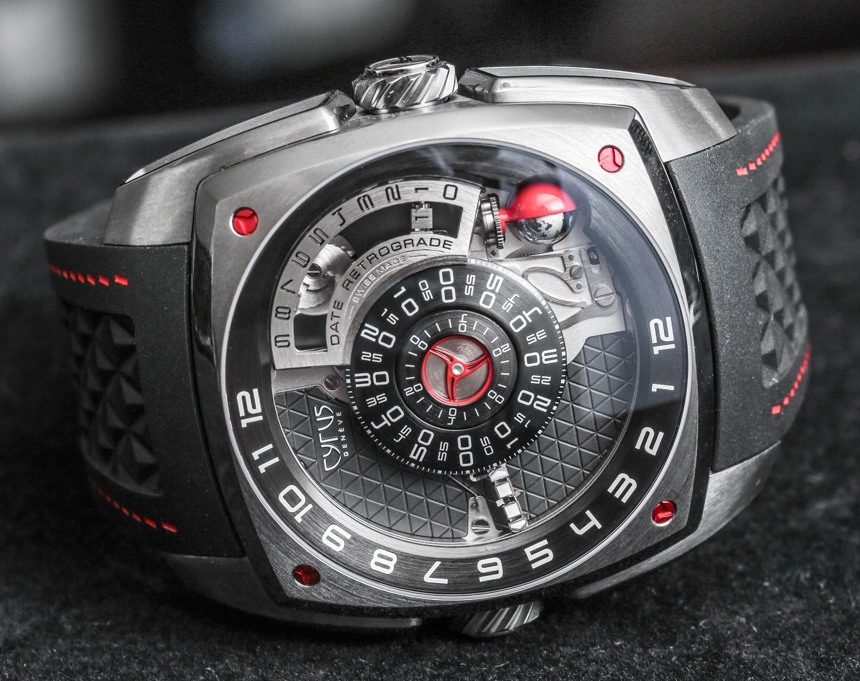 The Cyrus Klepcys is easily one of the strangest watches that I have worn for any extended amount of time (even more so than the Azimuth SP-1 Landship watch). Why strange? Well, let’s look at this cushion-shaped space craft for the wrist with its movement that is exotic not only in its complications, but also in how it even indicates the time. I’ve spent many conversations simply explaining to people how the “mobile cube” system in the Cyrus Klepcys allows you to read the proper hour and minute. With that said, after getting used to this rather clever time-telling concept, the Cyrus Klepcys becomes easy, if not actually enjoyable to read. 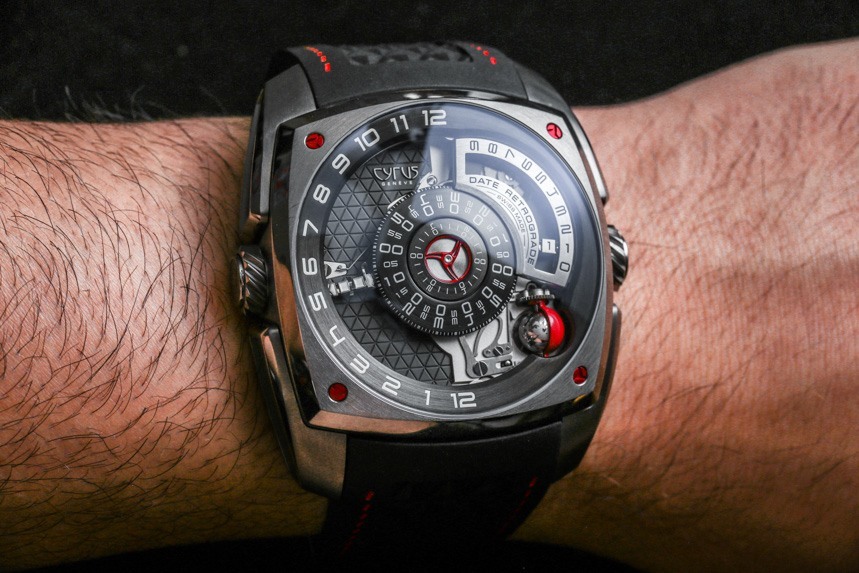 The Cyrus Klepcys started its life back in 2011 when it was originally debuted on aBlogtoWatch here. At the time, the brand was under different ownership. The movement was designed by Jean-Francois Mojon, a person we respect for his often brilliant and typically unique watch movements. Mr. Mojon is the head of a movement design firm called Chronode – which also happens to be owned by the same people who currently own Cyrus. 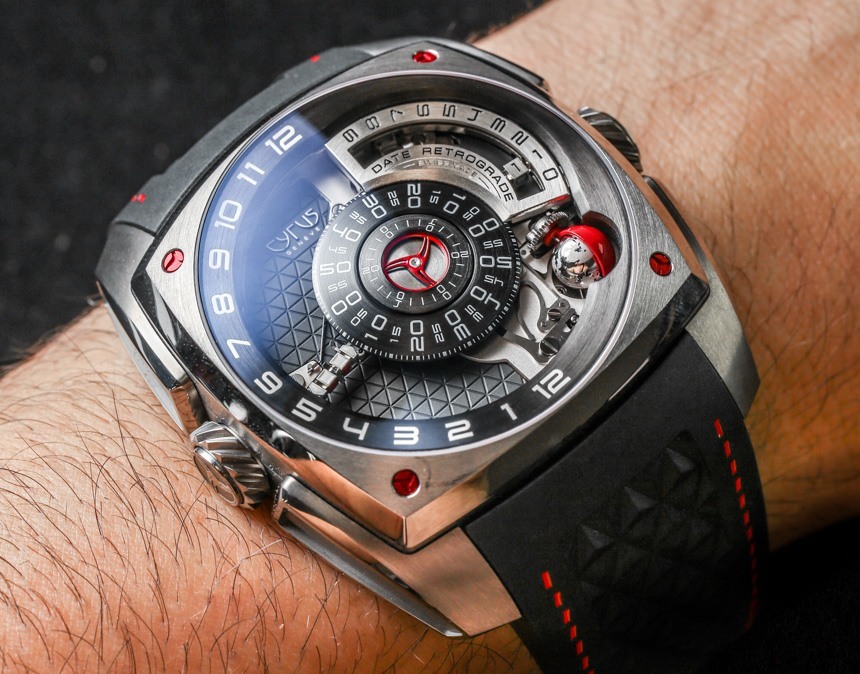 I don’t want to discuss the movement just yet. Even though the mechanical automatic movement inside of the Cyrus Klepcys is interesting, it isn’t what first catches most people’s attention. The large 48mm-wide case with its tall, curved stance and massive personality is what most people see first. You need some big wrists to properly pull off the Cyrus Klepcys, else it will eat your arm alive. The many surfaces and details are impressive, and the watch does look decidedly cool. With that said, there are some very sharp angles to the case. I’ll go so far as to suggest that the Cyrus Klepcys is among the more dangerous watches I’ve worn. Put to the test and in the right hands, it would not surprise me if an resourceful assassin could use the Cyrus Klepcys to complete a contract. 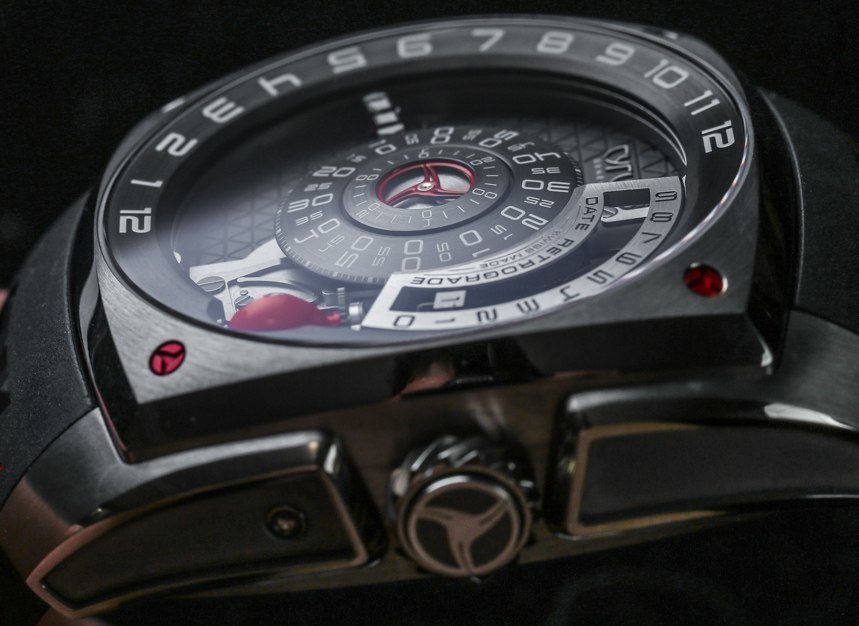 For the most part, the case isn’t going to cut you, but I am talking about certain elements, like the “serrated” crown and sharp edges to the deployant clasp. Wearing it normally is pain free, but once in a while, your finger will encounter a “challenging” angle. Perhaps, that is worth it, since it takes true grit to pull off a timepiece like this. It is interesting because I’ve found a distinct split among watch lovers with some capable (and willing) to don such a bold and avant-garde watch… while others shy away from anything that isn’t strictly “conservative” or “traditional.” What is it about untested designs that evokes so much emotion in either the positive or negative direction? 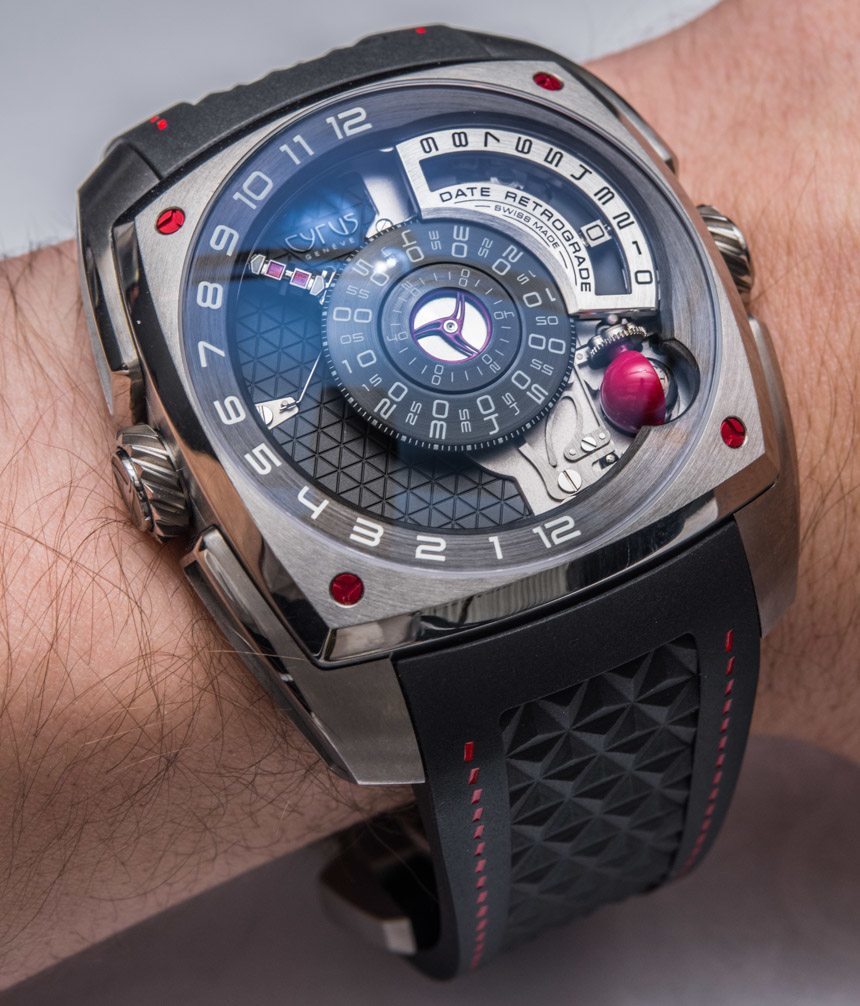 I, for one, am a known experimenter with watches, happy to wear a true classic, but excited to wear something new or uncommon. When wanting to go the full avant-garde route you really must combine a special movement with a special case – assuming you can afford it, that is. Looking at the Cyrus Klepcys in that regard, it does satisfy both qualifications. Just wait until you find the “Mars” version of the Klepcys… 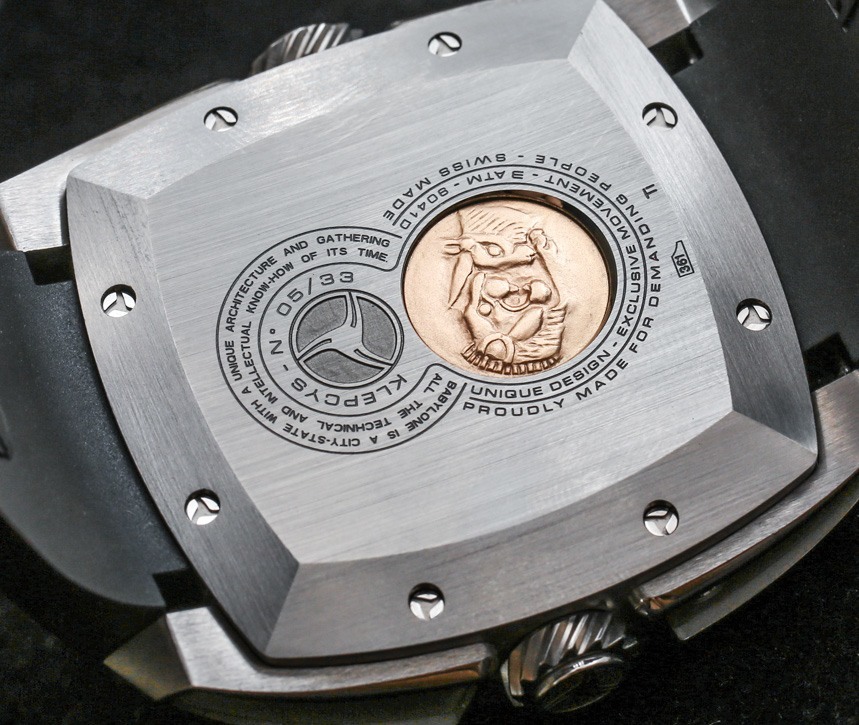 One of the more obscure details of the Klepcys is on the rear of the case. There lies a solid gold medallion “replica” of an ancient Persian empire coin. Cyrus claims (at least they did in the past) that the company owns the actual coin and that the gold replica on the back is a testament to the name of the brand (which is that of Cyrus the Great of Persia). This medallion on the back of the watch is an interesting touch but, like many things in the world of watches, it is difficult to appreciate its purpose without more of the brand’s back story. 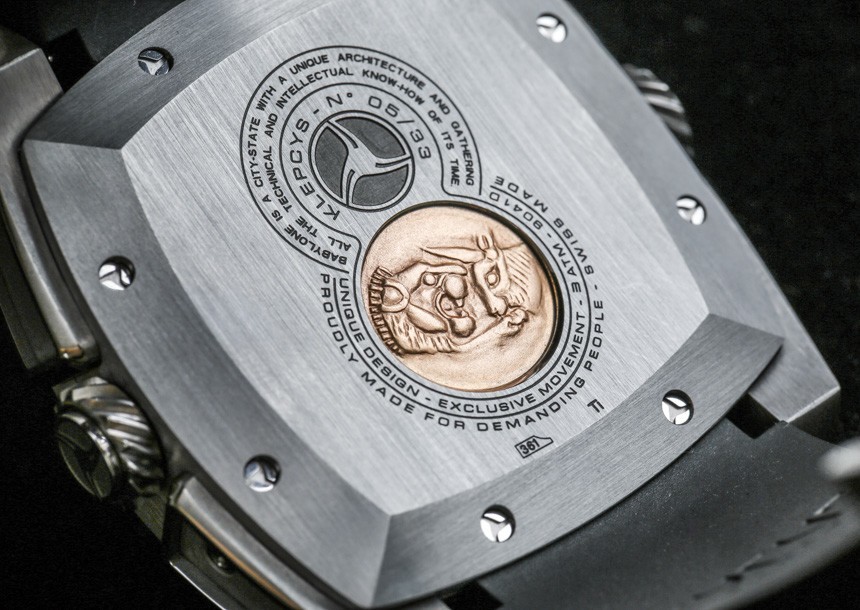 I have to admit that stuff like this happens a lot in the watch world. Brands produce products and are so invested in the process that they forget what the rest of the world needs to know about those products. Either there are design elements which require context to fully appreciate, or watches are designed without things like the actual model name on them. So I am not really singling out Cyrus here, but rather commenting on a larger issue in the watch industry which I find amusing. Then again, perhaps the mystery of why some watches are the way they are helps add to their appeal. 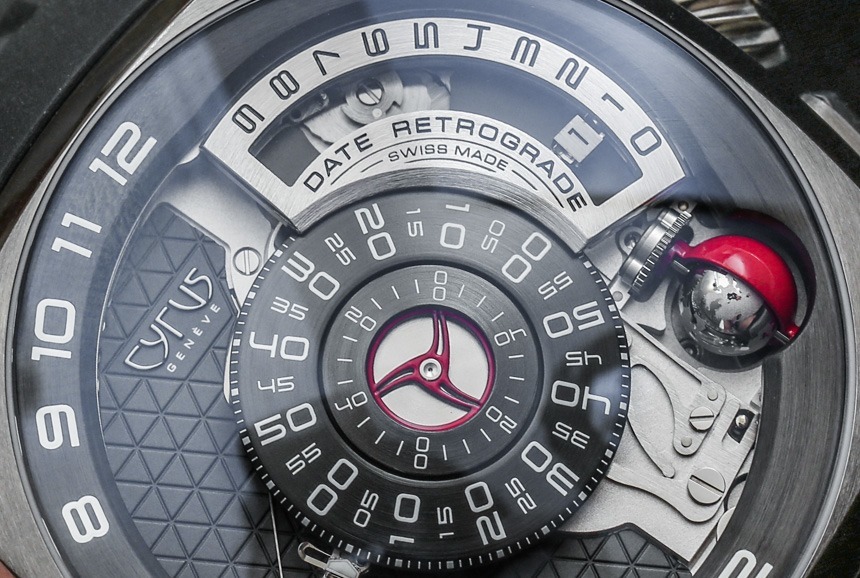 Exclusivity and rarity is an appeal unto itself when it comes to watches. In fact, the entire purpose of complex movements such as that in the Cyrus Klepcys is to be different. That means not only individual in their design, but also in how they operate and tell the time. Inside the Cyrus Klepcys is the caliber CYR598 produced from 456 parts, operating at 4Hz (28,800 bph). The movement has a power reserve of 40 hours and is an automatic. In terms of functions, it tells the time with hours, minutes, and seconds; shows AM and PM indicators; has a moon phase indicator; and displays the date. It also happens to do none of these things in ways most other watches do. 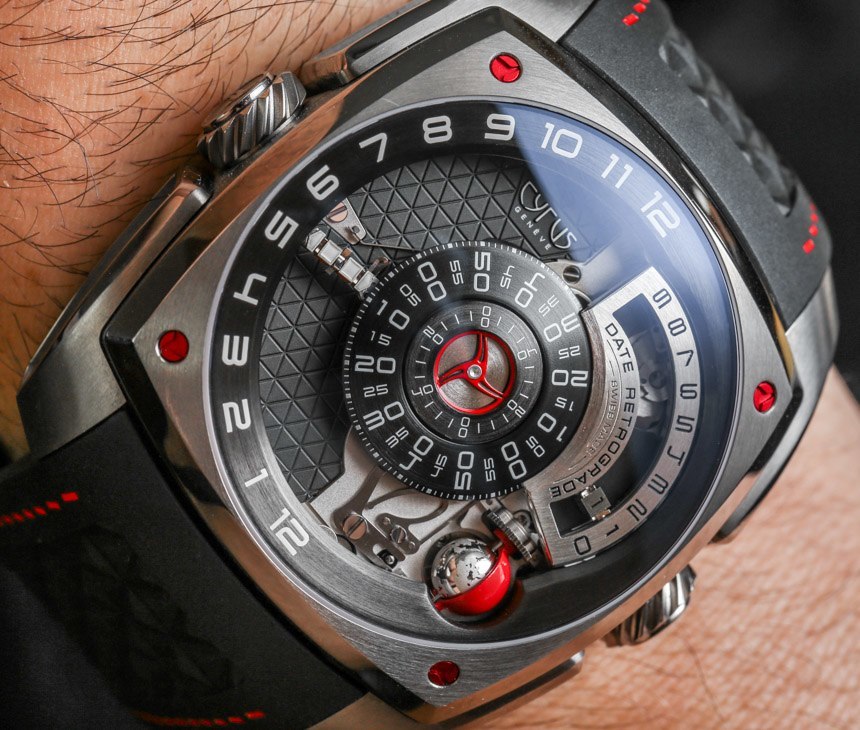 Time is told first with the seconds on a disc in the absolute center of the Klepcys dial. Around the seconds disc is a minute disc. This element is a bit complex because it needs to move in tandem with a retrograde hour hand. This means that as the hour hand moves, so does the minutes disc along with it. The effect is rather interesting and is certainly the result of clever gearing (and math). Hours are, of course, indicated on the scale to the left. To read the correct time, all you need to do is locate the position of the hour hand… which actually happens to also be the minute hand. While there are probably other examples, this is a very rare situation when the exact same hand indicates both the hours and minutes on separate scales. 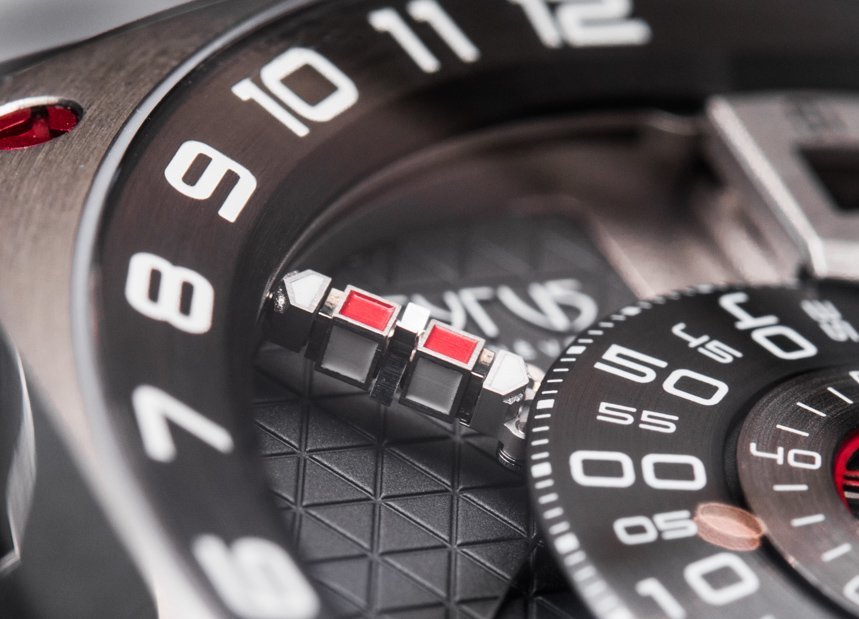 Look to the left of the hand, and you’ll find the hour, and to the right, you’ll find the minute. It works easily once you get the hang of it, but you’d be surprised how often people don’t understand how to read the time on the Cyrus Klepcys. It is a fun way to test people – just ask them to read the time. The time-telling hand has another trick to it, though: the small cubes spin in order to indicate day or night. Basically, one side of the cubes are painted one color (such as yellow or white) and the other side is painted red. This is how you you determine AM or PM. 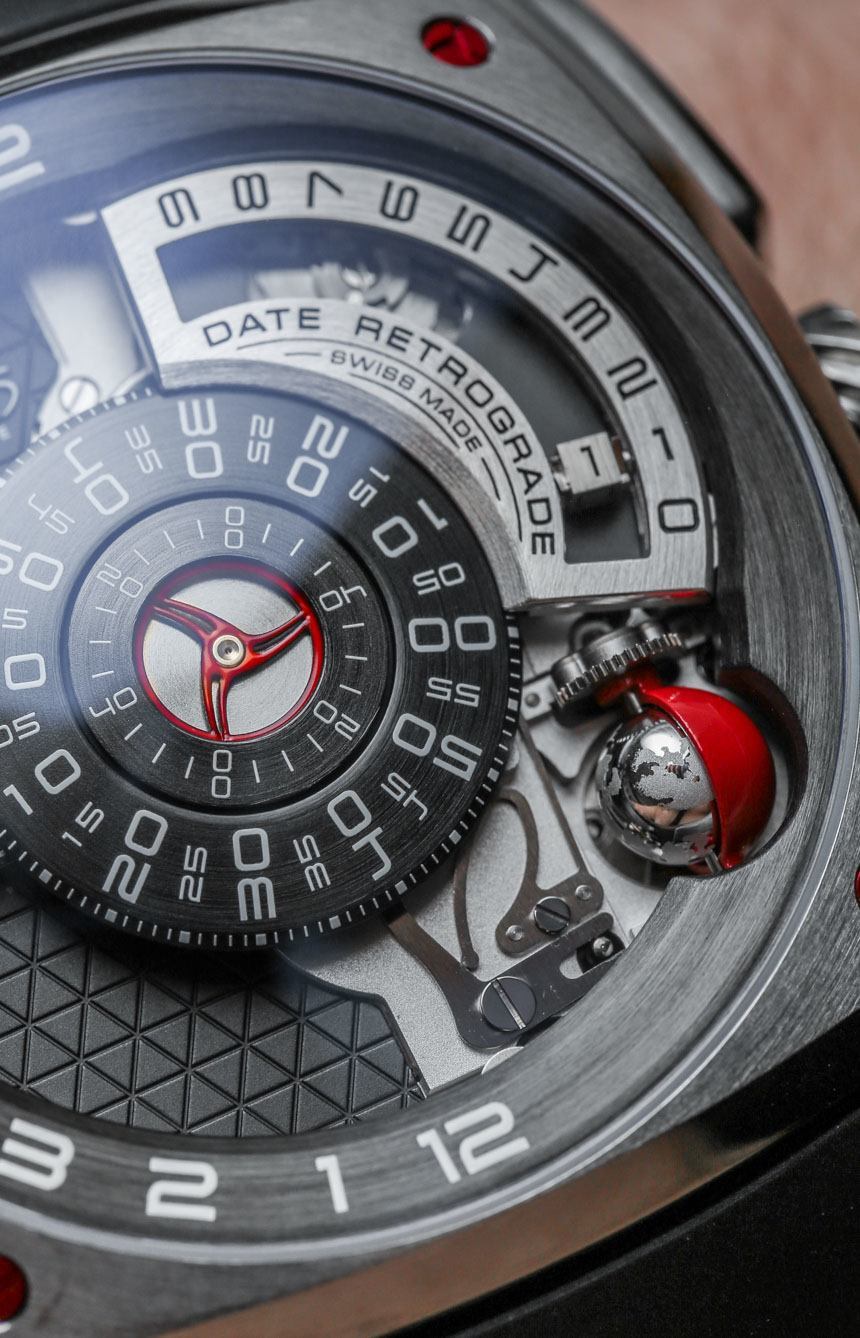 The upper right quadrant of the Cyrus Klepcys dial is dedicated to the very interesting retrograde date indicator. Once again, a small metal cube is used to indicate the correct information. The cube indicates either 0, 1, 2, or 3 and moves along a scale of 0-9. The most clever part is how the system knows there aren’t 33 days in a month and adjusts accordingly. The date is further adjusted by the Cyrus Klepcys’ right crown – which is actually a pusher. Playing with the date indicator is easily one of the most enjoyable elements of fiddling with this timepiece. 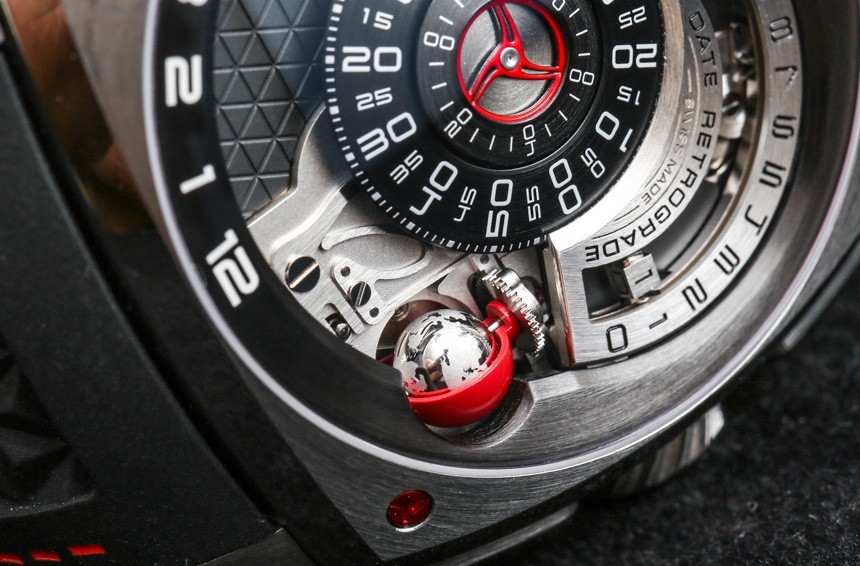 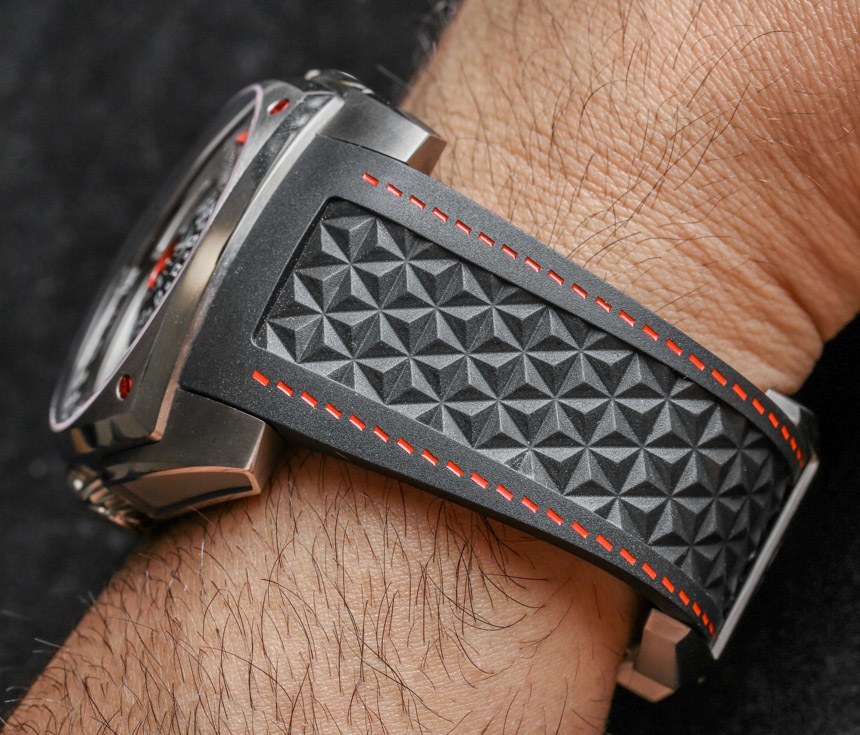 The movement inside of the Cyrus Klepcys is certainly a highlight of the collection – and I believe the dial is finished in a slightly different way depending on the case material. Again, there are also the rare “Mars” versions. This particular ref. 539.004.C version of the Cyrus Klepcys is the base model because it is in natural polished titanium. I prefer that because it helps remove a bit of the mass, given the lightness of titanium. Cyrus offers at least six other versions. These are produced either in 18k white or rose gold, or a combination of gold and titanium parts. There are also some models with DLC black-coated titanium parts. 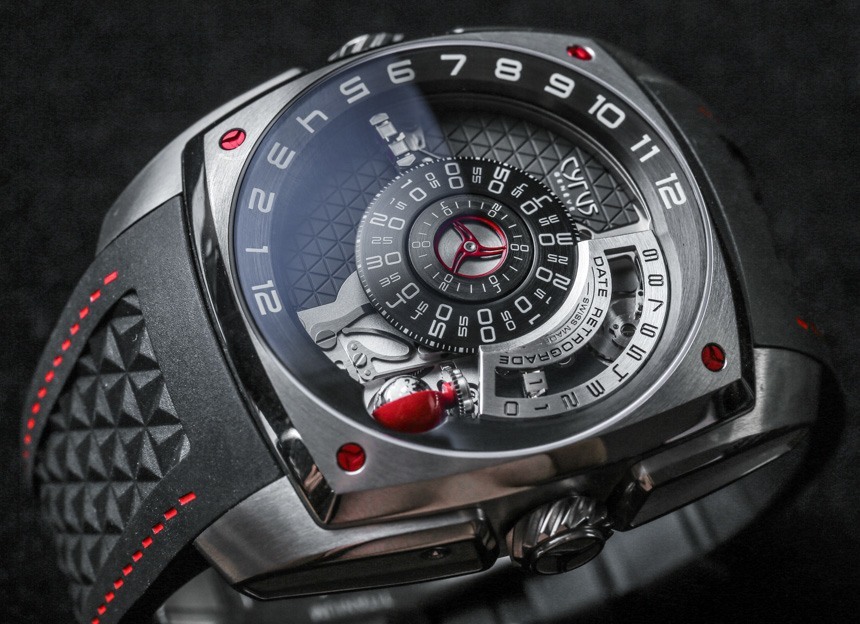 All versions of the Cyrus Klepcys are limited editions, and each version is limited to just 33 pieces, save for the 18k white gold with black DLC titanium 539.002.A (limited to 88 pieces). This is a very unconventional watch that is going to be uniquely enjoyable to collectors of rare, complicated timepieces. I feel very lucky to have worn and shown off one of these – especially when seeing people struggle over understanding the dial. Price for this titanium version of the Cyrus Klepcys is $82,790 and the collection tops out at a $137,890. cyrus-watches.ch