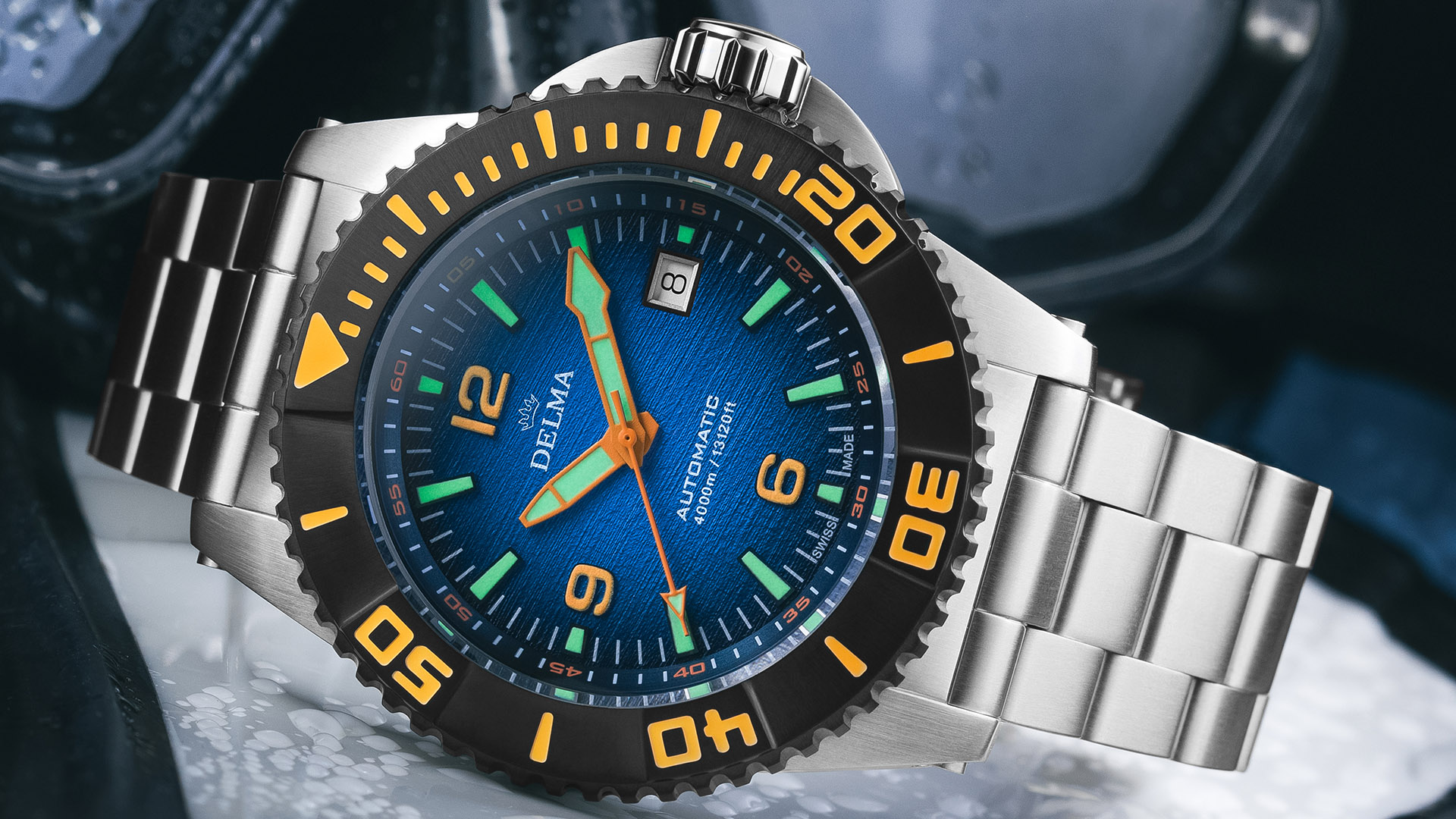 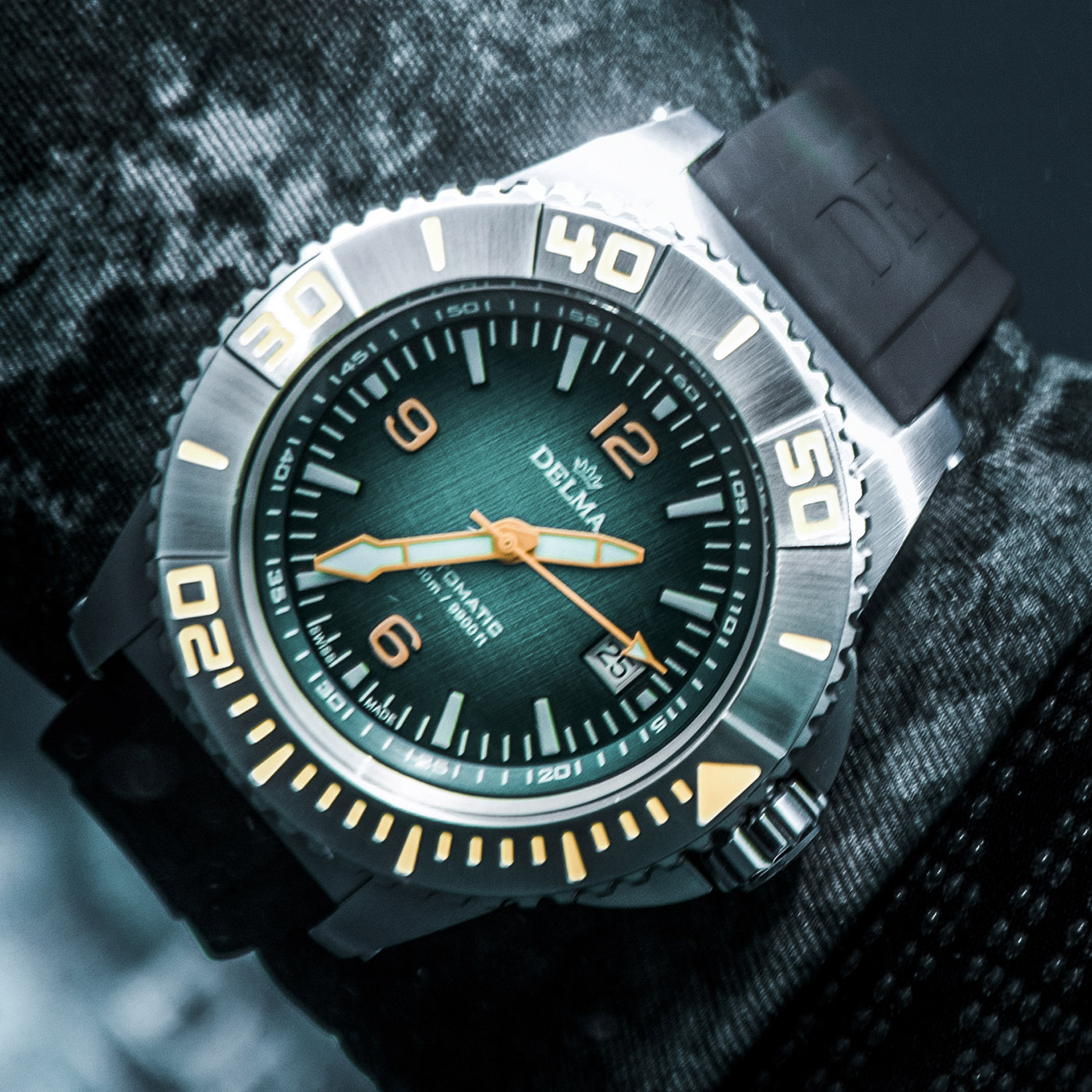 As one of the most popular segments in all of watchmaking, the term “dive watch” covers a broad swathe of the market with nearly endless varieties. Everything from sleek and gentlemanly revivals of midcentury skin divers to hulking stainless steel brutes capable of reaching depths over 1,000 meters share this category, and for its latest release, independent Swiss brand Delma has unveiled a striking example of the latter type. With a depth capability that far outstrips even the most advanced atmospheric diving suits for deep-water use, sales from this new diver design will directly benefit the Megalodon Project, a nonprofit organization dedicated to studying and preserving marine megafauna including the elusive blue shark. Delivering both immense durability and a robust functional look, the new Delma Blue Shark III Azores line is a bold deep-sea predator with a worthy cause. 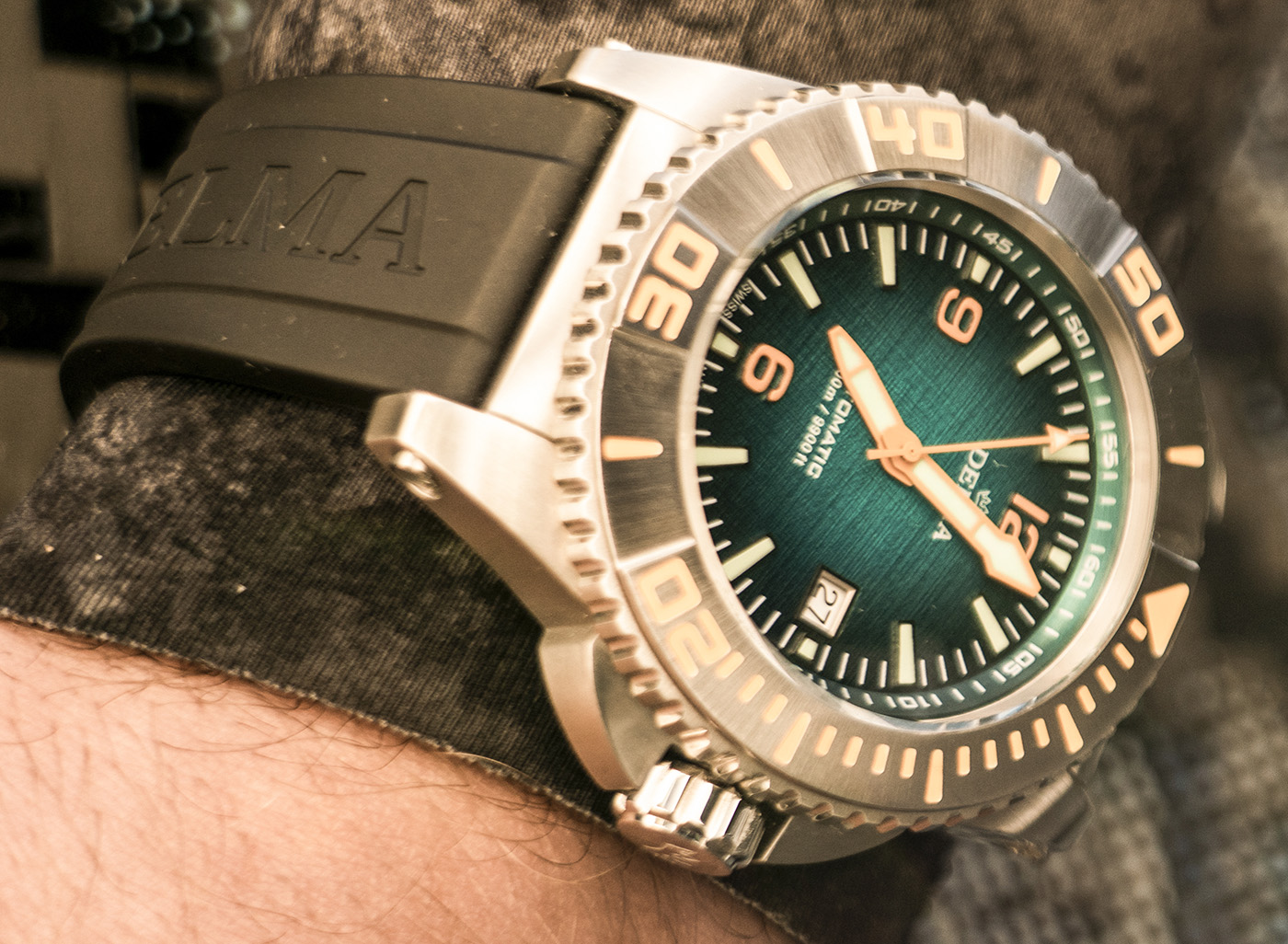 Right off the bat, the stainless steel case of the Delma Blue Shark III Azores line establishes that this is not a watch for the faint of heart. At a massive 47mm-wide and 18.5mm-thick, the oversized case beefs up nearly every element of the classic dive watch design formula to maximize durability. The semicircular crown guards are thick and project heavily from the slab case sides, the tapering athletic lugs are wider than most, and the unidirectional dive bezel uses a robust gear-tooth edge that calls to mind off-road truck tires as much as it does a traditional dive watch. This last element is also a platform for customization, as Delma offers both brushed stainless steel and matte black DLC finishes to go with the hazard yellow dive scale. This hefty, ultra-masculine look isn’t just for show, however, with Delma including a helium escape valve at 9 o’clock. All this robust construction adds up to an immense 4,000-meter depth rating, independently certified and tested by the Swiss PST Laboratory for Product Safety Testing. To put that massive figure into perspective, that is more than six times the depth of the deepest ever recorded human dive, inside a heavily armored U.S. Navy atmospheric diving suit. 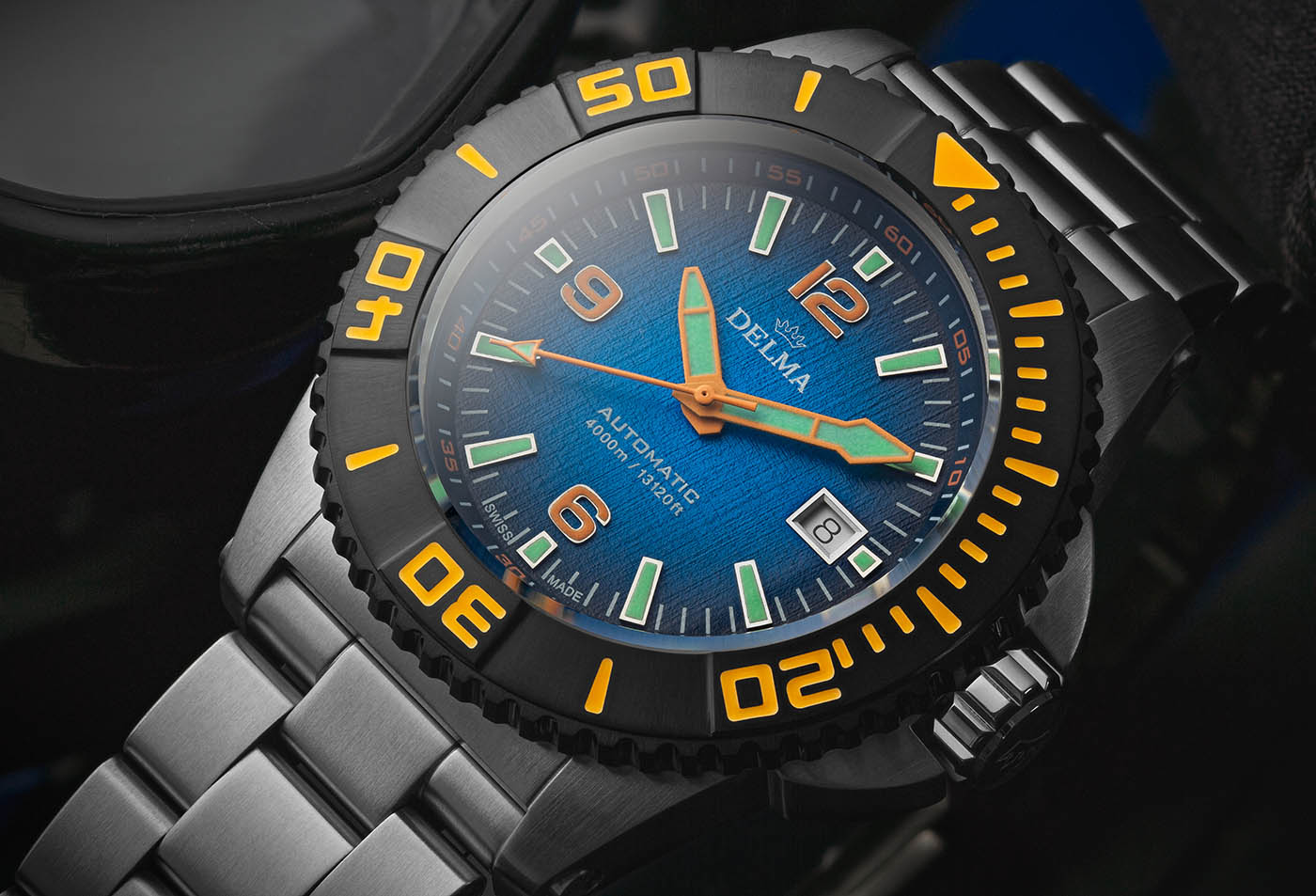 Like the cases, the dials of the Delma Blue Shark III Azores line are designed with heavy-duty utility in mind. For the dial of a dive watch, utility can often translate to legibility, and the Blue Shark III Azores is no exception. Visually important elements, from the applied Arabic numerals at 6 o’clock, 9 o’clock, and 12 o’clock, to the unique “snakehead” handset and elements of the outer minutes scale are rendered in bold high-visibility yellow to immediately attract the reader’s attention. This emphasis on legibility is backed up by a generous lume fill across the hands and applied indices. Despite this function-first mentality, the Blue Shark III Azores series still shows a fair amount of visual flair. The dial surface itself is a perfect example, with a heavily textured linen finish atop a dégradé gradient in either oceanic blue or a deep, nuanced aquamarine green. With the amount of visual complexity here between the colors, gradients, and visual textures, however, the white date display at 3 o’clock comes off as a somewhat disruptive afterthought in images. 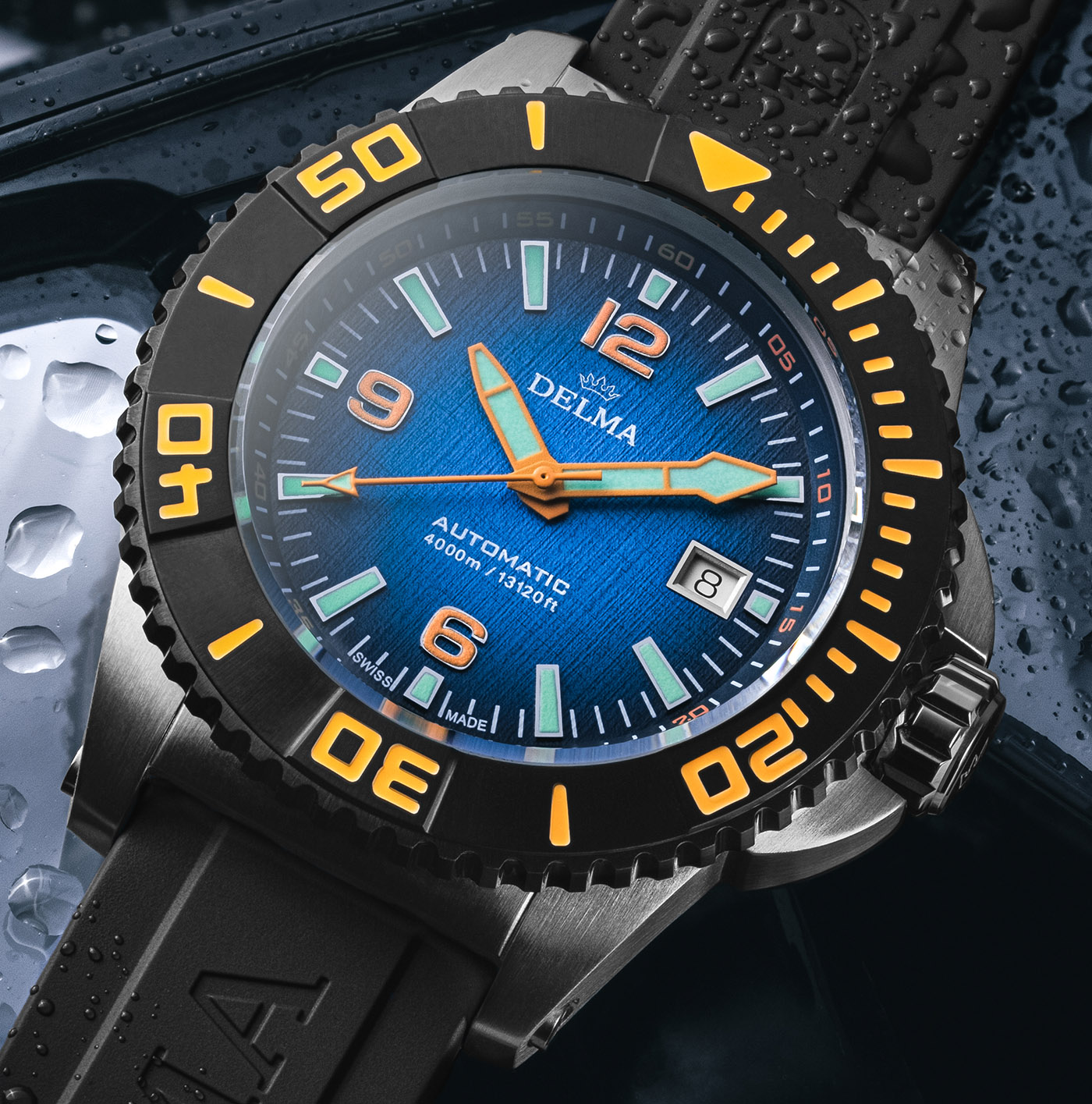 Delma uses the long-running Sellita SW200 automatic movement for the Blue Shark III Azores series. Although the SW200 is a venerable workhorse of a movement with a legacy stretching back many years, given the rest of the design’s focus on extreme capability it’s easy to be disappointed by this aging movement’s performance. Power reserve is an underwhelming 38 hours at a 28,800 bph beat rate. Delma pairs the Blue Shark III Azores line with two included straps. The first and more classical of the two is a three-link oyster-style bracelet with straight end links. Also included is a signed black rubber strap for a rugged modern sporting look. Both straps are easily changeable, thanks to the Blue Shark III Azores’ drilled lugs.