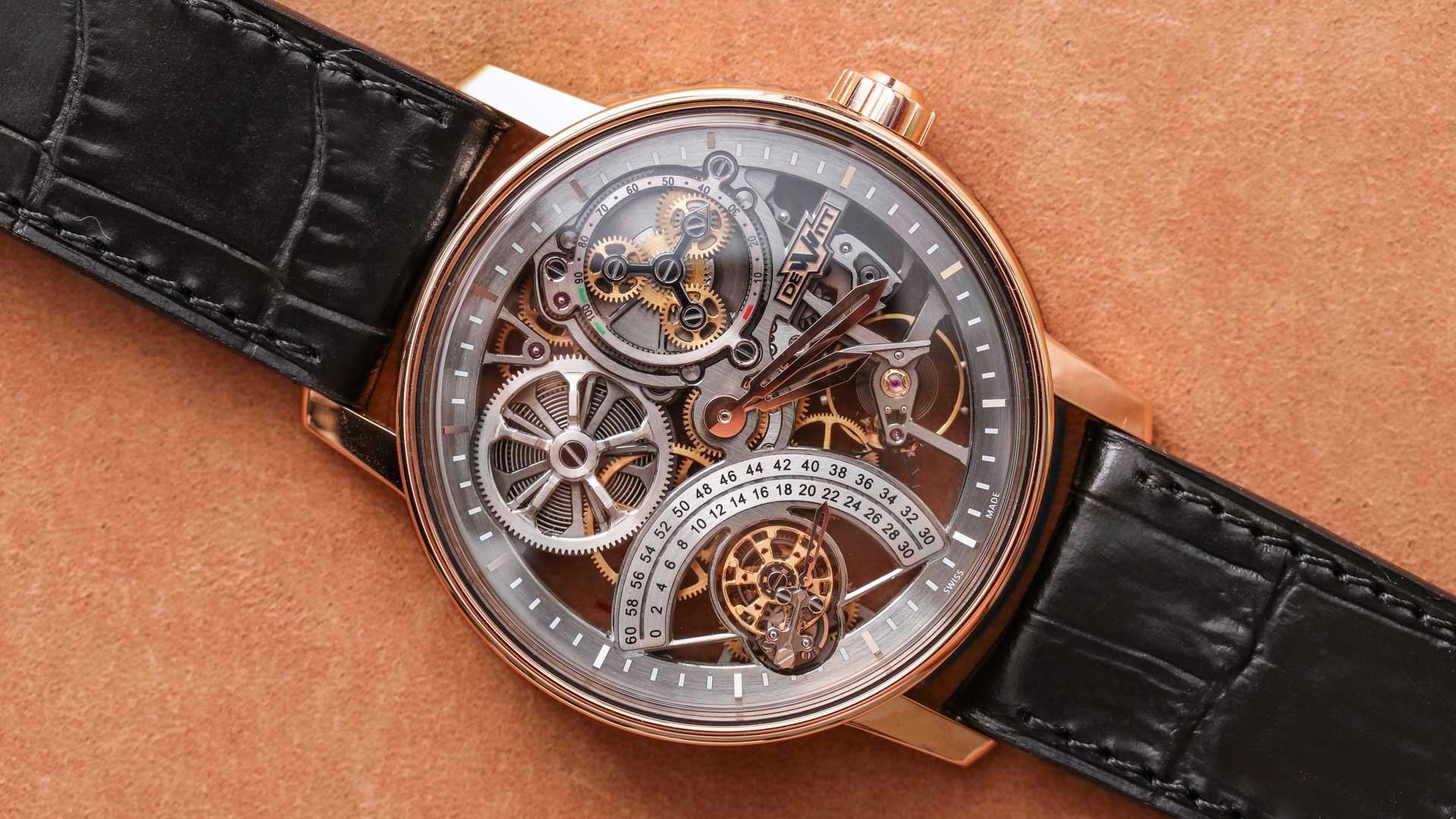 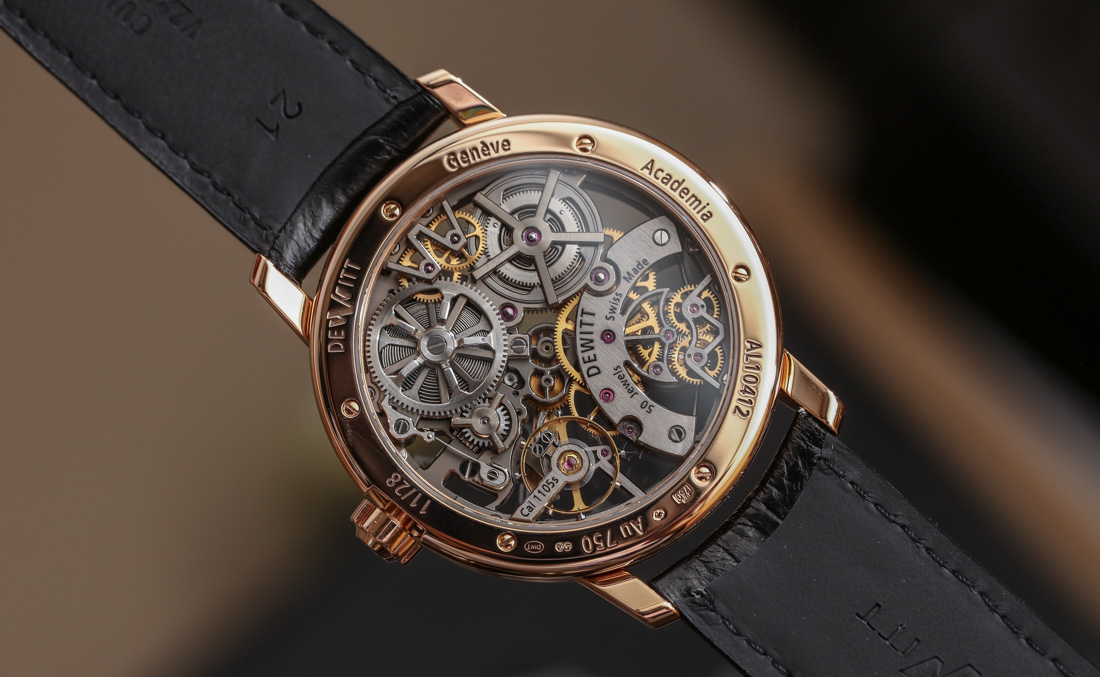 Geneva-based watchmaker DeWitt is usually best known for their ambitious application of “interesting” mechanical principles in the small confines of a wristwatch movement. I’ve seen them do this many times over the years and the same is true for this DeWitt Academia Skeleton reference AC.SKE.001 watch that I am reviewing today. DeWitt is not always so famous for easily explaining or communicating these impressive qualities that the manufacture has in general or in its particular products – and thus it requires a careful eye and extra attention to properly understand these products. Founder Jerome DeWitt seems to be of the mindset that the “right” enthusiasts will not only discover his company’s qualities, but end up appreciating his brand’s handiwork in the form of their products. So let’s see what interesting talents and personality this new DeWitt Academia Skeleton watch has in store for mechanical aficionados.

While this timepiece probably isn’t the first skeletonized watch produced by DeWitt, it is the first one that I can think of which is “traditionally” skeletonized. That means a totally open dial with just the hint of a traditional face in the peripheral flange ring, which is where you’ll find the hour and minute markers. The rest of the dial for the most part is a view of the movement and its various working pieces. In fact, this watch looks so different as a DeWitt, that unless you view the Academia-style case from the side, it would be easy to confuse the Academia Skeleton as a product coming from another brand. At a glance the watch often reminds me of an Arnold & Son. 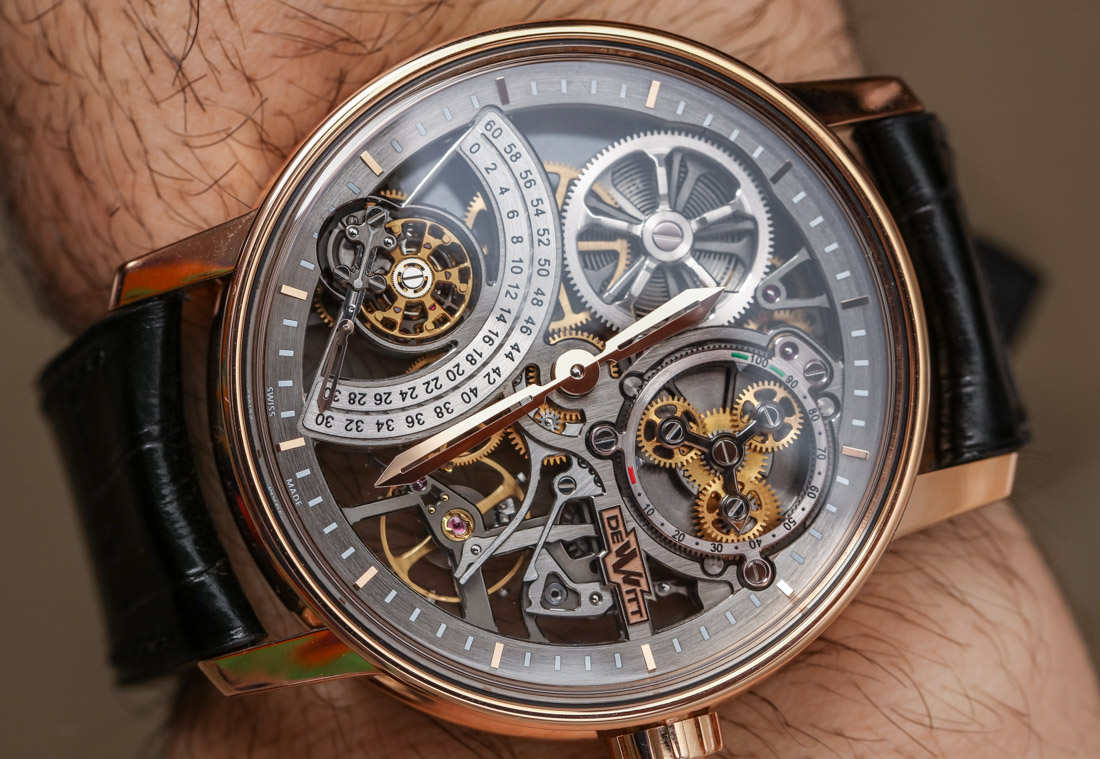 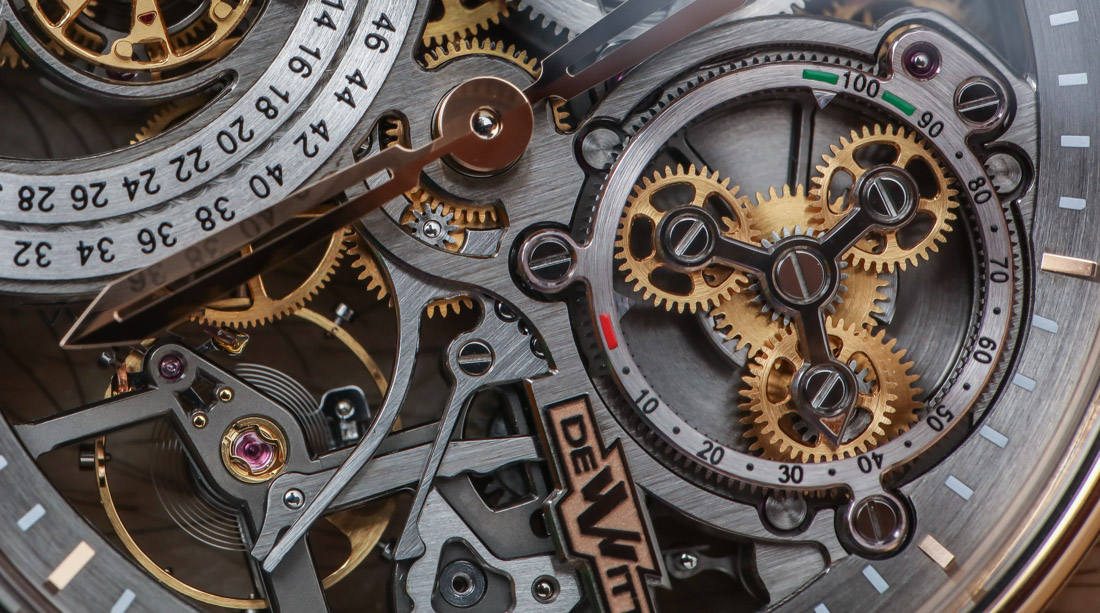 Despite always having clear technical merit, many DeWitt watches often have one or more small legibility issues. In the case of the Academia Skeleton, it is the hands that easily blend into the dial and which are a bit on the short side. The hands suffer from being entirely polished as well as being a bit skeletonized themselves. This inevitably leads to a disagreement with the designer that they “wanted it this way.” Does that mean they don’t want the hands to be as emphasized? I think it does. I fully disagree with the design philosophy that a luxury watch doesn’t need to focus on telling the time legibly because people purchase these products for artistic purposes. I mention this rebuttal to my argument because it is the typical response I get during private discussion with many brands about matters related to legibility. Time and time again they disagree with me, while clear evidence shows that legible watches are the ones which are the most widely sold in the market. Then again, with the low production numbers of DeWitt, I don’t think they should have too much trouble selling 28 of these Academia Skeleton watches. 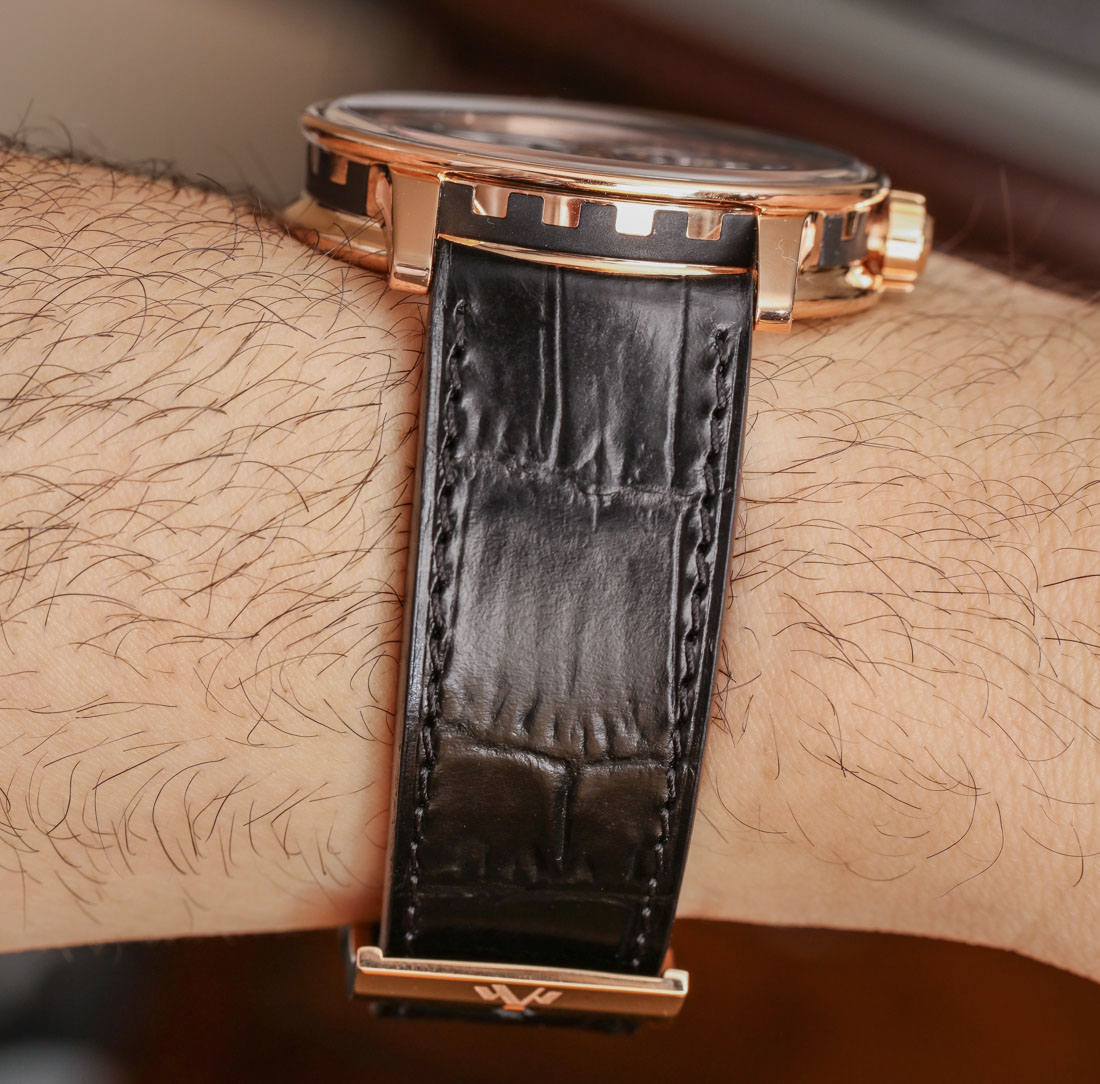 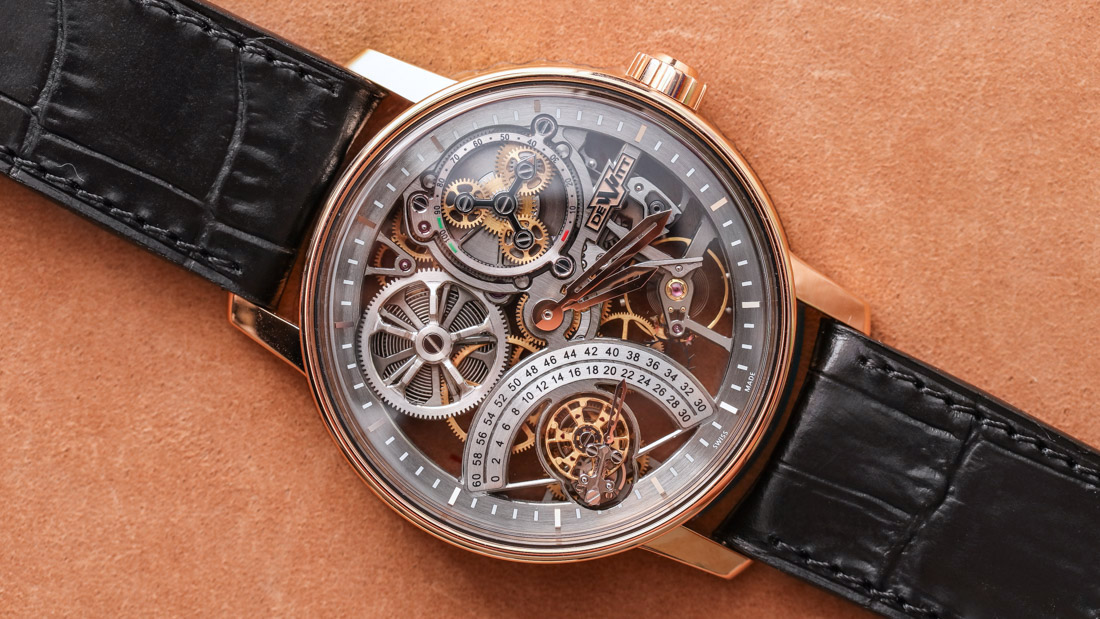 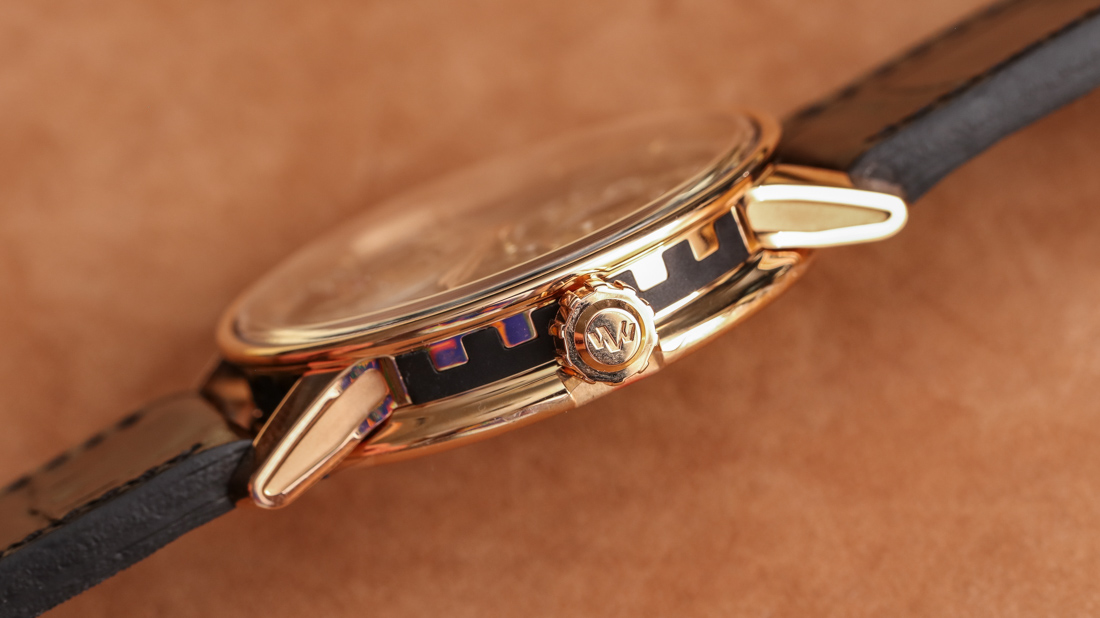 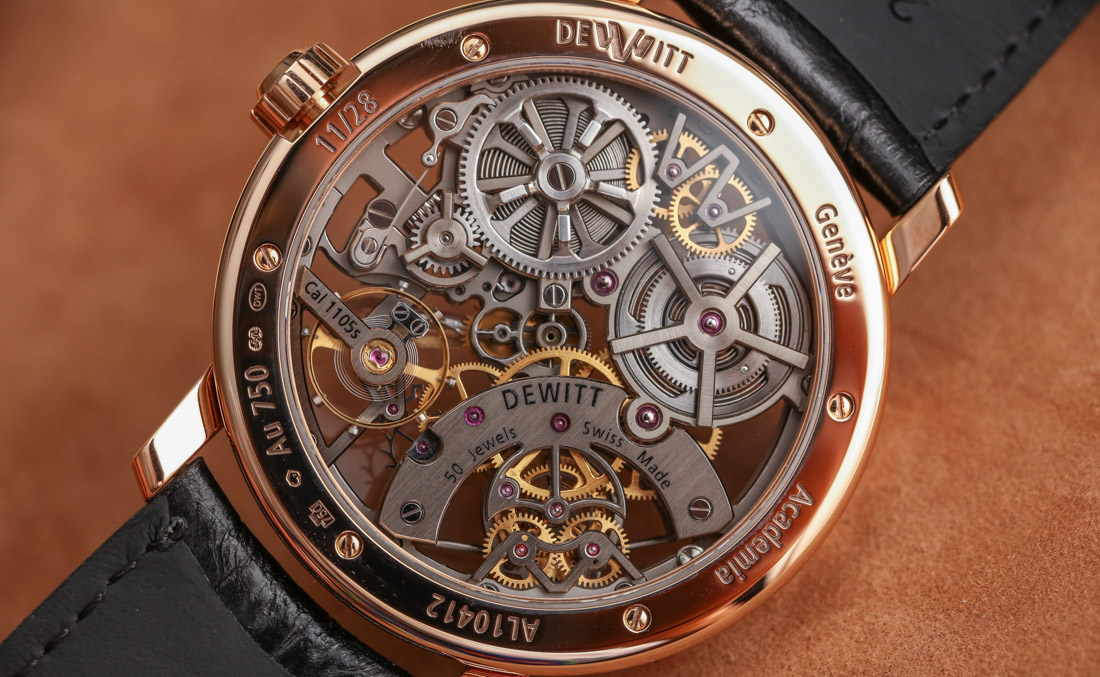 DeWitt’s in-house manually-wound caliber DW1105S powers the Academia Skeleton and it has 100 total hours of power reserve operating at 3Hz (21,600 bph). The “S” part of the movement’s name likely designates it as a skeleton version. This process begins with the company producing bridges and other elements which are as slim and metal-free as can be. Next it involves a decorator carefully hand polishing and finishing the parts, which is where the “haute horology” part of the equation comes into play. I like the DW1105S movement overall from a design perspective. There are some really nice looking parts and my favorite is one of the mainspring barrels which not only has some lovely hand-decoration, but also a nice shape. Looking at either the front or rear of the watch you can see both of the mainsprings in the barrels and can more or less eye the amount of power in the movement as a function of how tightly coiled the springs are. Then again, there is that power reserve indicator which you can use as well.

I haven’t spoken about my favorite feature of the movement yet, which is what DeWitt calls a “bi-retrograde seconds” indicator. I sort of take issue with the term because it has been used in the past to refer to two different retrograde counters as opposed to what DeWitt engineered into the DW1105S movement (made up of 263 parts). I’m not entirely sure what to call the complication I am about to describe, but “retrograde” would be part of the term. A better description of the bi-retrograde seconds indicator would be a “dual direction retrograde hand with a dual-position hand.” Let me explain what that means.