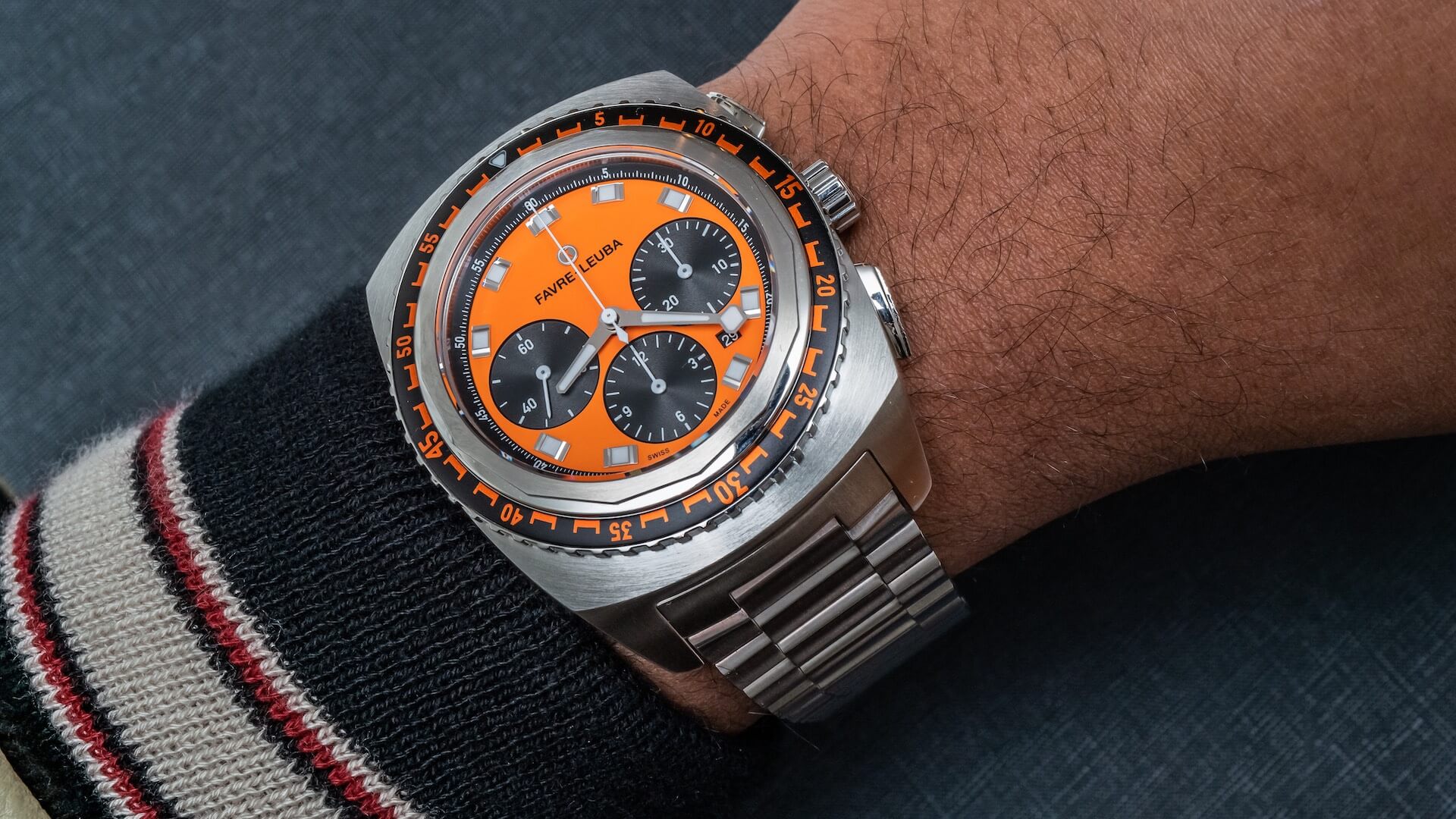 Favre-Leuba relaunched a few years ago and has steadily been releasing some serious tool watches that pretty faithfully stick to a modern interpretation of its retro designs from the 1960s-1970s. This Favre-Leuba Raider Sea Sky I spent some time with is a chronograph that does this with fair success, taking the design of the old Sea Sky and tweaking it just enough to appeal to modern buyers. If you like the size and distinct styling, but don’t like the prices, of dive chronographs like the Omega Seamaster Planet Ocean or even some of Panerai’s Submersible Chrono models, then I implore you to at least look into the Favre-Leuba Raider Sea Sky. 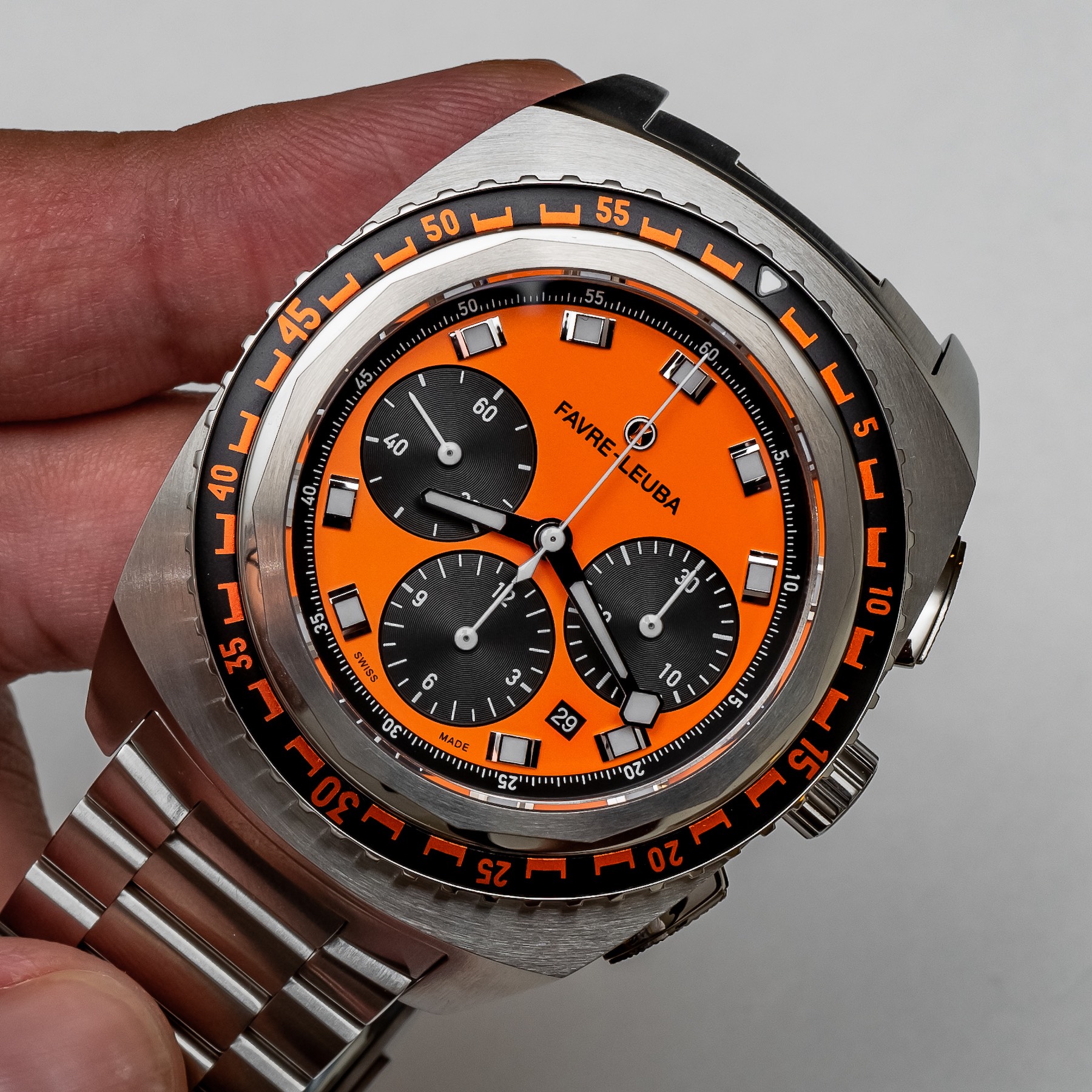 The Favre-Leuba Raider Sea Sky comes in a few color schemes, including yellow, blue, black, and the one you see here, orange with black subdials. The use of orange, while certainly not unique to Favre-Leuba, hearkens back to some of its older Bathy 160 watches produced from the 19760s through the 1970s. While these older models had more of a bright hue (almost verging on neon), the modern Sea Sky is bright and vibrant, while not quite as lambent. 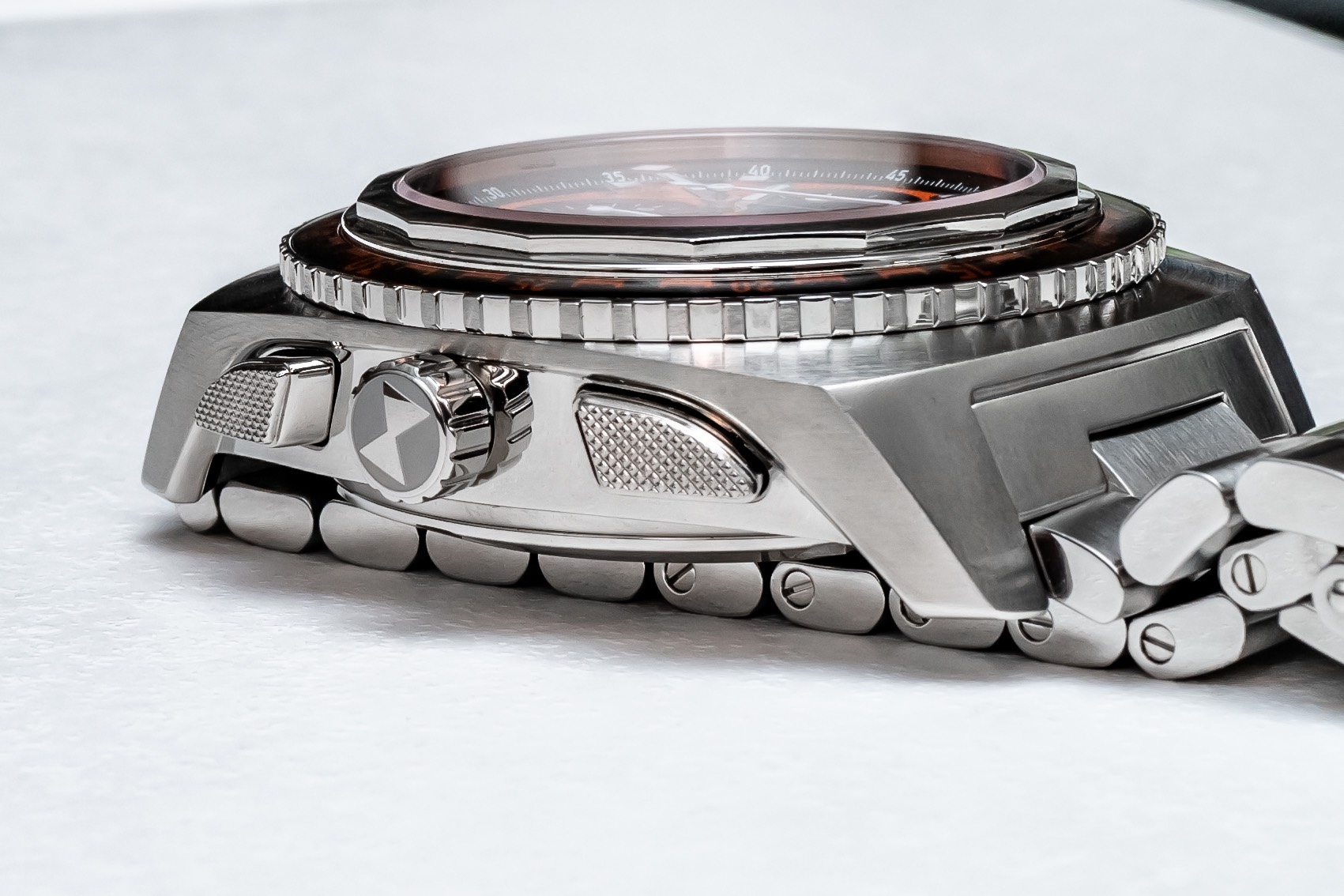 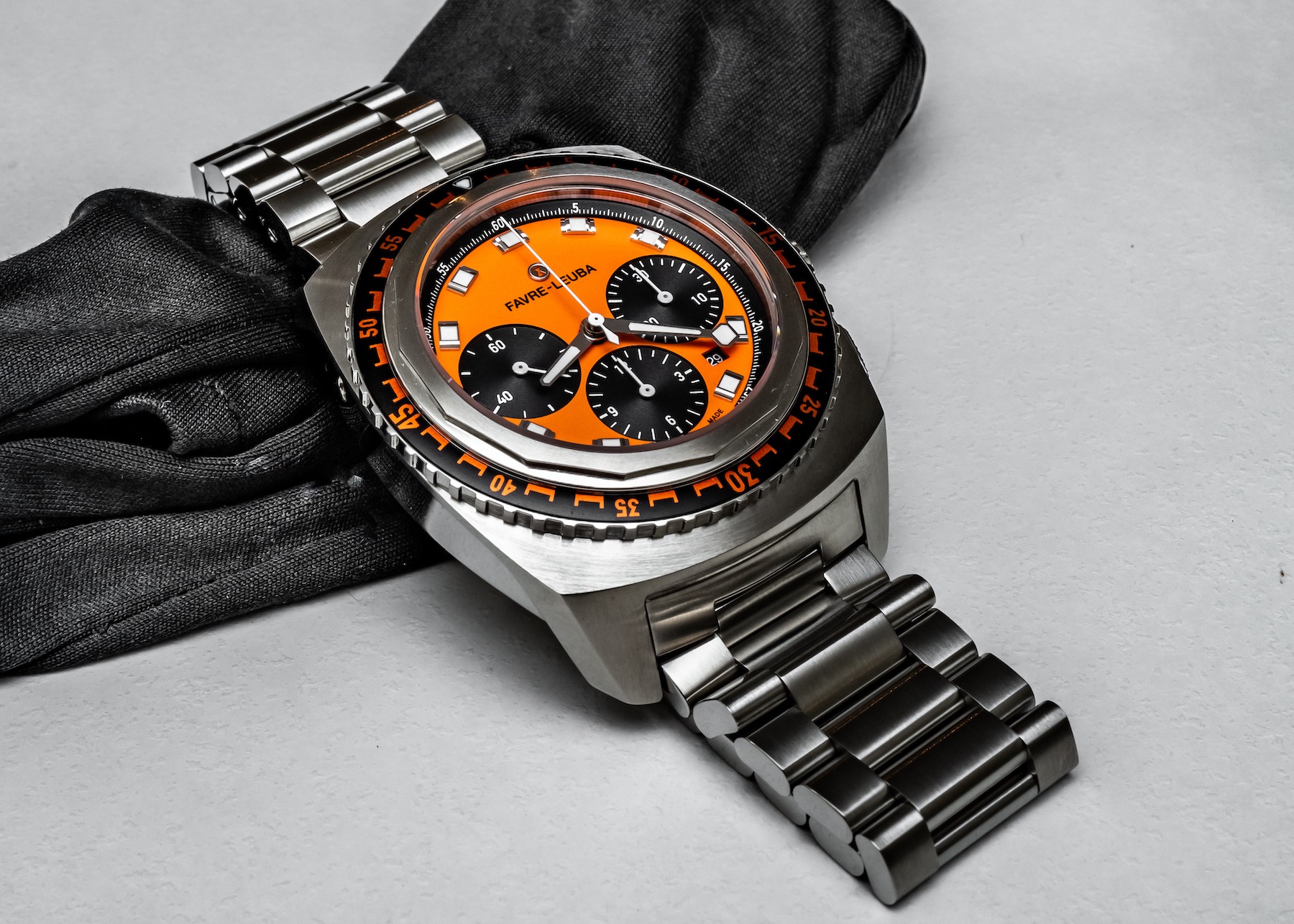 The barrel-shaped case is definitely a welcome change from the overly boxy old Sea Sky, giving some much needed and sparingly used soft curves. Other than the same 200M water resistance, one carried-over detail I immediately noticed is the tetradecagonal inner bezel, which is subtle when you look at the watch head-on but shows some great detail when you look at the profile of the watch. On that note, the case is pretty well finished and attractively designed. I appreciate the lines that run down each side of the case through to the ends of the lugs; they very nicely break up what would otherwise be a thick, drab slab.

The integrated chronograph pushers are also really sleekly designed, and I give credit for the touch of improved gripping. The pushers just add to the overall feeling I get that Favre-Leuba really thought out the design of the Raider Sea Sky. 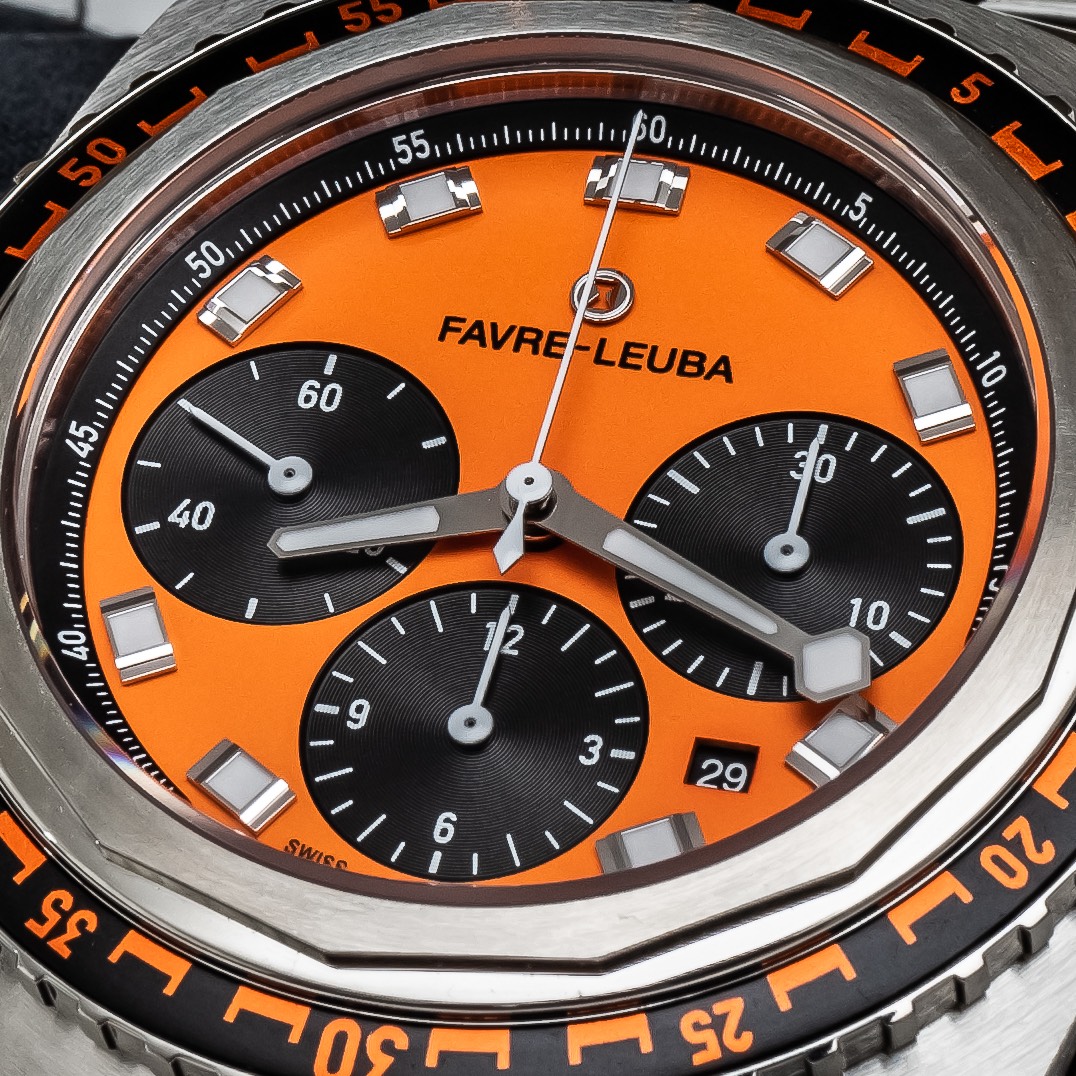 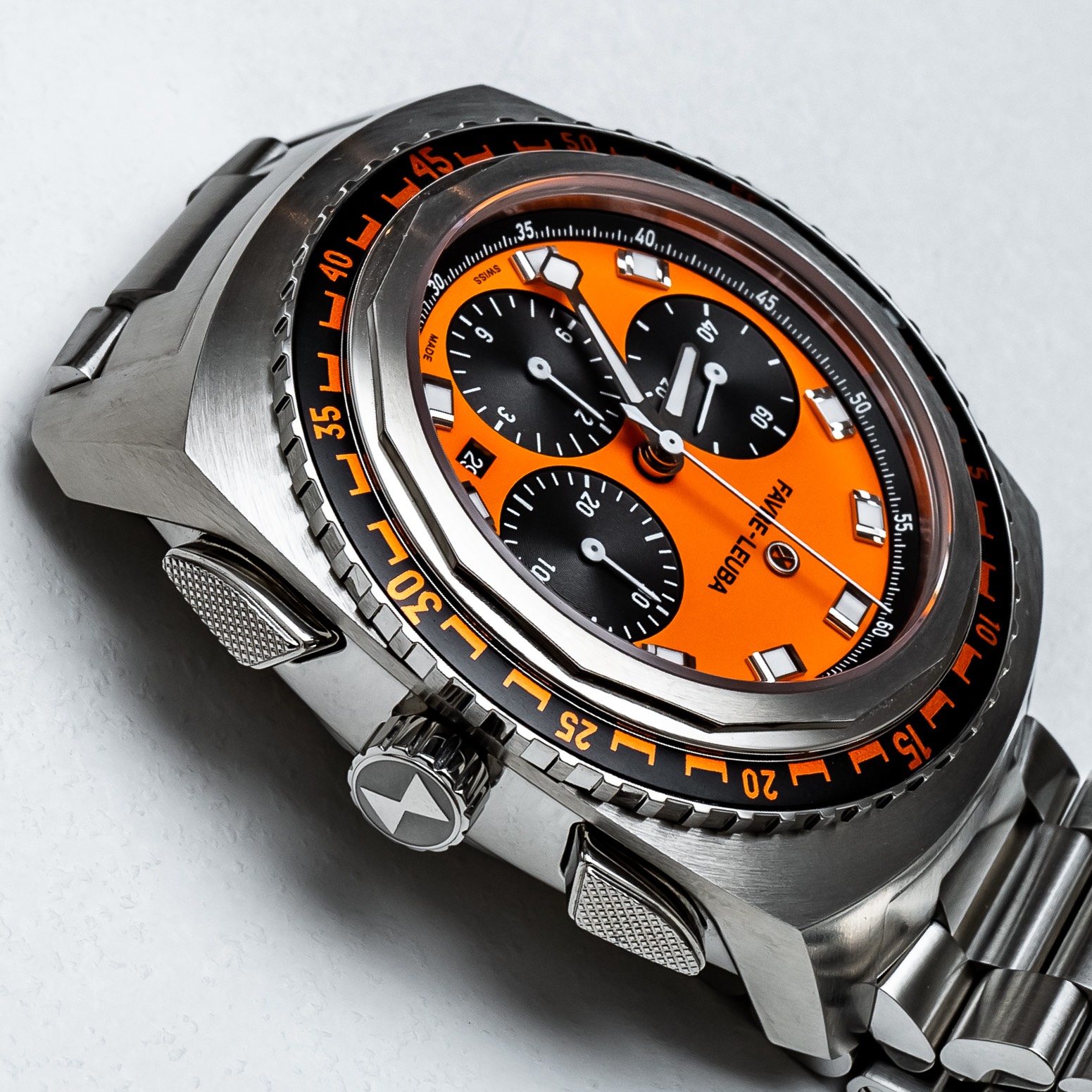 One thing to note: This is a solid, heavy watch that shouts, “Give it your best shot.” In fact, I was wearing my titanium Grand Seiko before putting on the Raider Sea Sky, and I’m pretty sure my downstairs neighbor could hear the thud of my wrist hitting the floor. Honestly, though, I love a nice heavy watch, and the weight of the case distributes well when wearing it on the wrist. The uni-directional aluminum bezel has a nice strong click to it when turned, which is exactly what you’d expect when handling this chronograph. 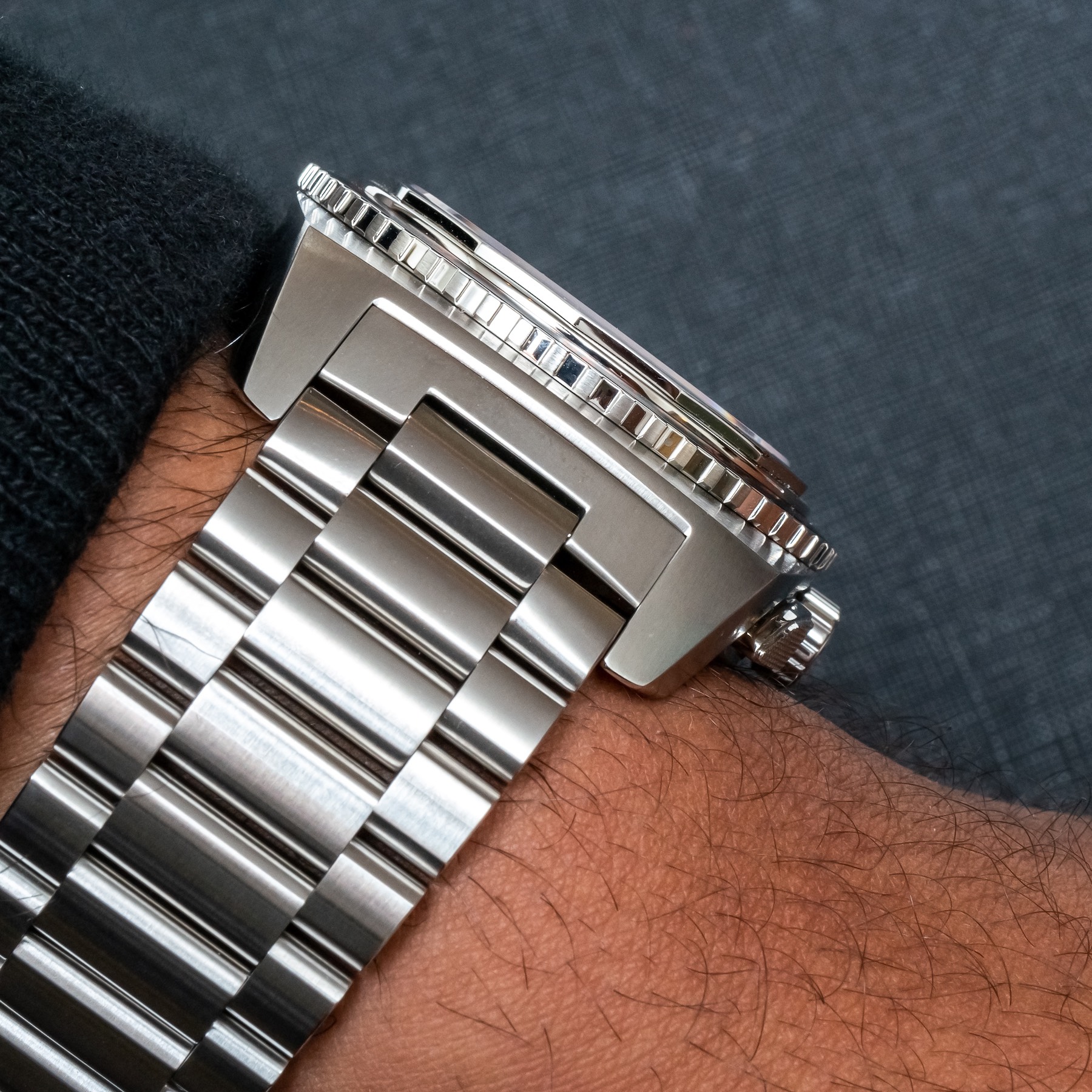 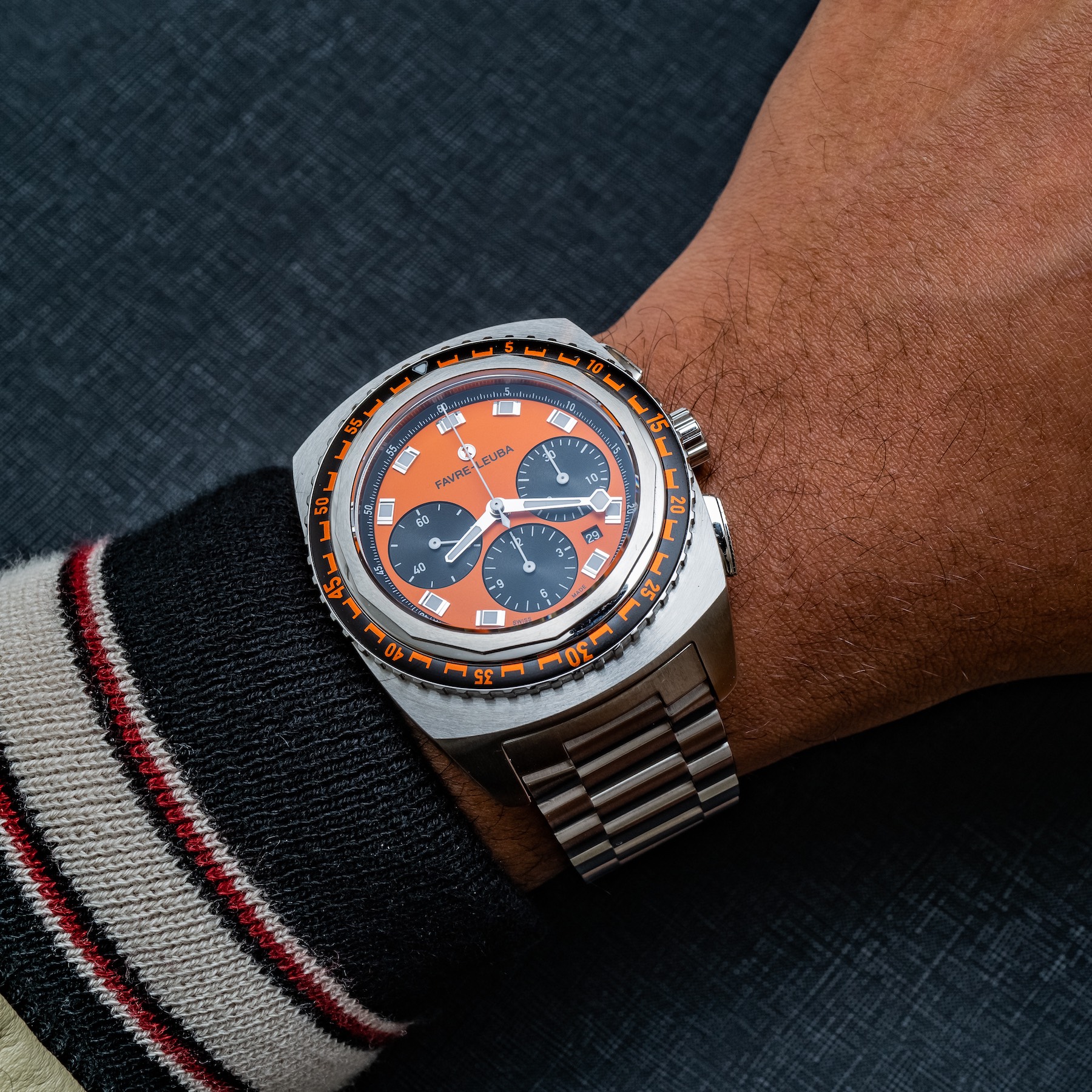 As for size, the case measures 44mm-wide, 16mm-thick, and has a lug-to-lug height of 54mm. Yes, it’s a big boy that is in line with something like the Omega Seamaster Planet Ocean Chronograph, which is bigger at 45.5mm-wide and thicker at 18.87mm, though has a slightly smaller lug-to-lug height of just around 52mm. On my 7.5-inch wrist, the Sea Sky is a little larger than I’d ordinarily wear, but I think anyone with a > 7.75-inch wrist will have no problem. Contextually, for the brand, the Sea Sky lands somewhere between the non-casual wear, 48mm-sized Raider Harpoon or Bivouac 9000, and the smaller 41mm Raider Sea King. 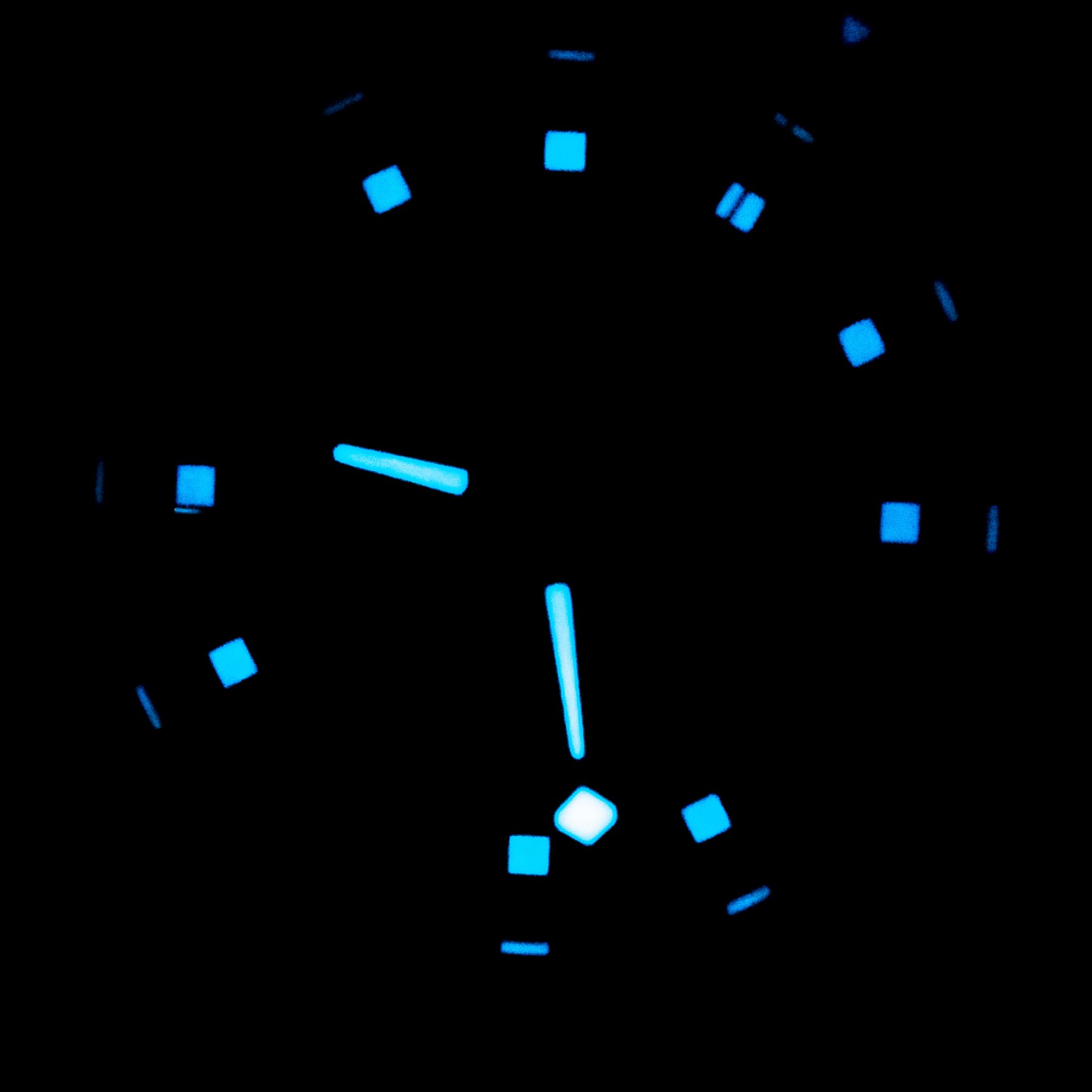 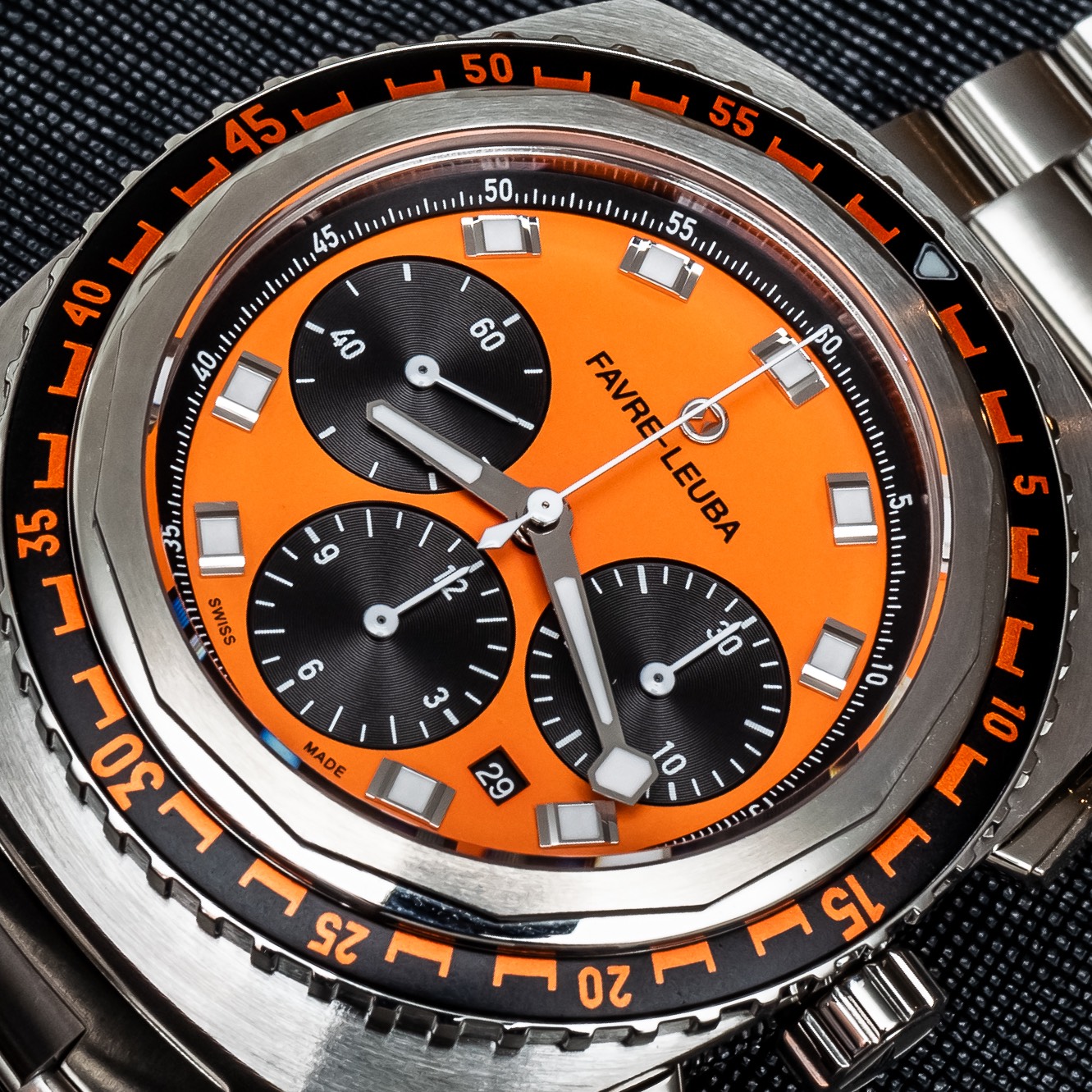 The dial is, above all else, legible. The hands contrast against the orange or black background clearly and at any angle thanks to AR coating. The signature minute hand is neat and extends to an appropriate length, as does the more conventional hour hand. The subdials are nice and big, while the date window is quite small. I don’t really actually mind too much and, in a way, the small size of the window actually accentuates the ease of reading due to the legibility. That said, I would have left it out altogether.

I immediately noticed and liked the applied hour indices. They’re polished and refined but not in a way that looks out of place with the rest of the largely matte dial with the exception of the hour and minutes hand. They’re almost decoratively arranged, but the lume on them brings things back to business. 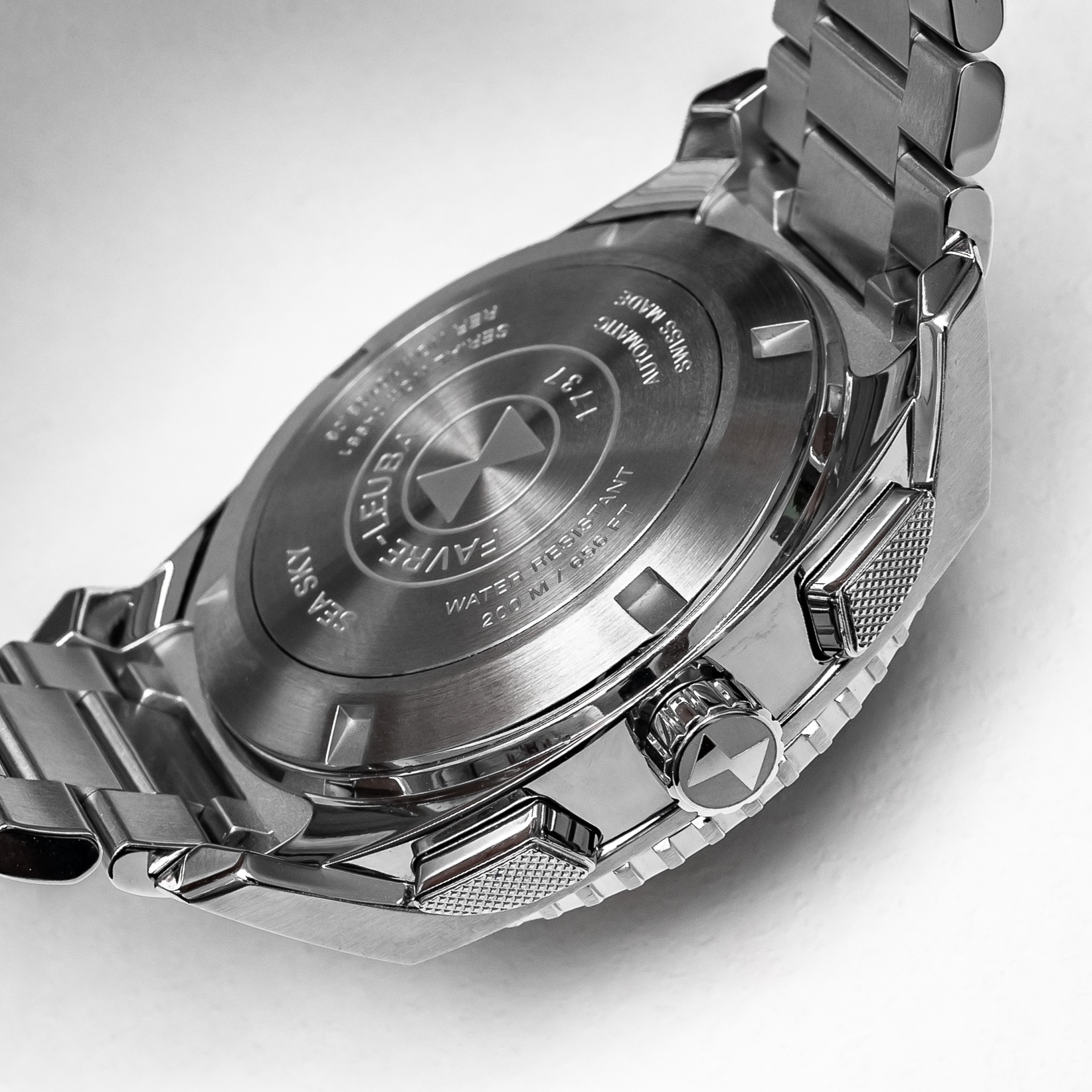 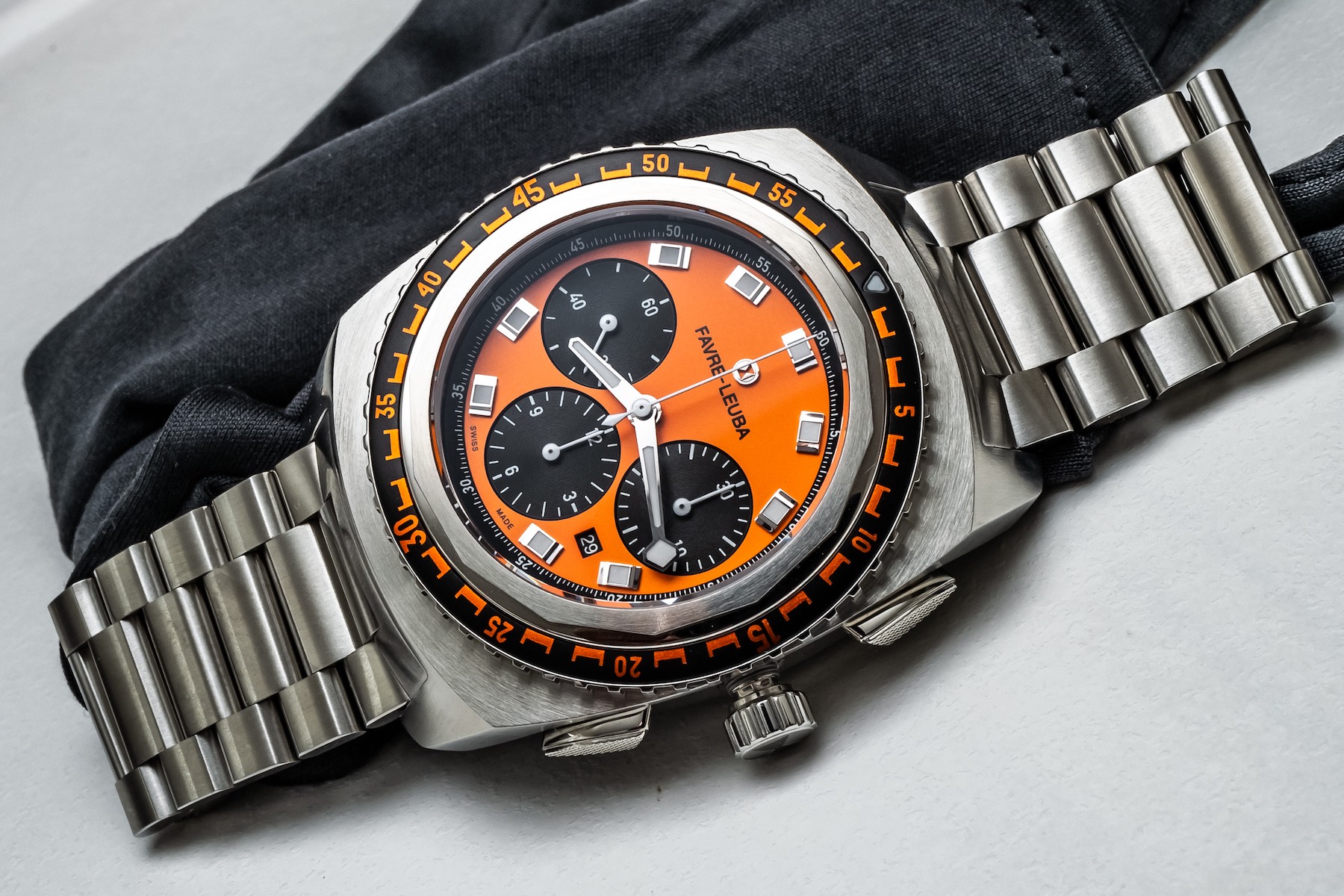 The Sea Sky I wore comes on the steel bracelet, but it also comes on leather and rubber straps. The bracelet is nice enough, though I really do wish there was some kind of micro-adjustment feature. Maybe that’s something that Favre-Leuba can look at for the future, as it’s one of those details that’s always missed when it’s not there. Still, the bracelet is finished well and is really comfortable. 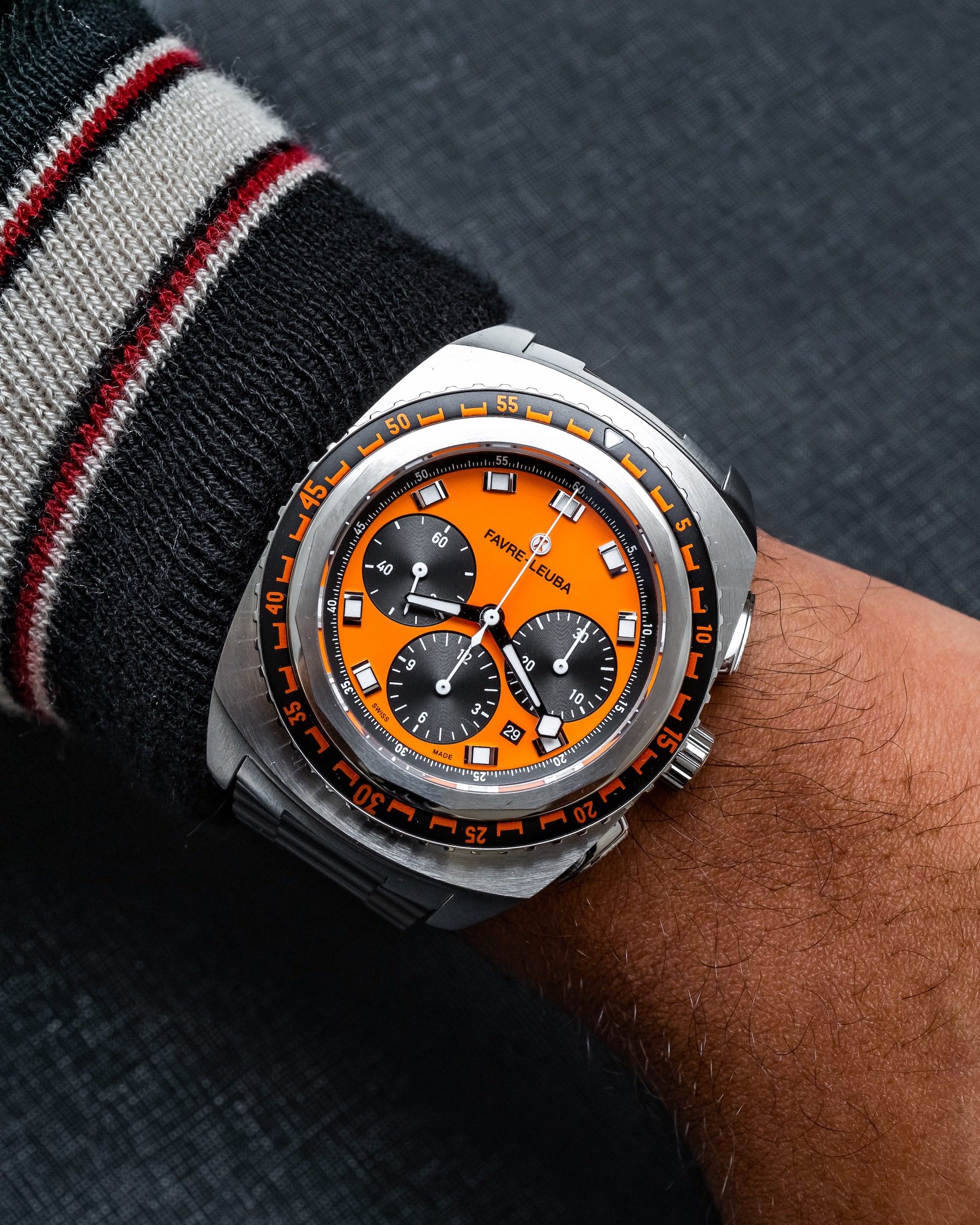 The Favre-Leuba Raider Sea Sky is a fun chronograph that benefits greatly from such a strong history to draw from. This gives a real identity to the design and style, allowing it to stand out from the crowd (even though the world of larger-sized dive-style chronographs isn’t that big). I was impressed with the attention given to the case construction and have nothing but good things to say about the dial, as well. If a larger-sized, tough-as-nails chronograph, with a fun design and personality, is what you’re after, put this watch on your list. Available on the brand’s e-commerce page (link here), price for the Favre-Leuba Raider Sea Sky starts at $3,300 on rubber strap, $3,400 on leather strap, and $3,800 on steel bracelet, as seen here. You can learn more at favre-leuba.com.