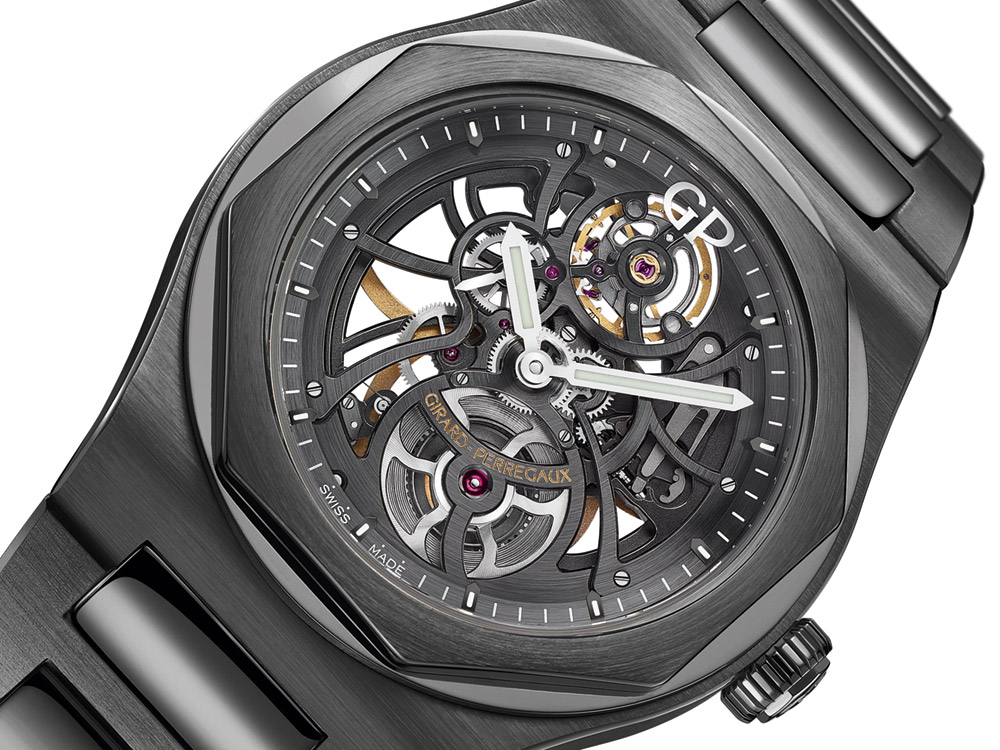 Girard-Perregaux is a manufacture rich in history, whose roots stretch back to 1791 with the works of Jean-François Bautte in Geneva. Now based in La Chaux-de-Fonds, Switzerland, Girard-Perregaux has often struggled to achieve the sort of brand identity enjoyed by other top-tier watchmakers like Audemars Piguet and Patek Philippe, in part because their modern collections lack a consistent and accessible model to serve as a company emblem. The Laureato is meant as Girard-Perregaux’s answer to that – and the Royal Oak – and following the model’s revival, a slew of variations have culminated in the Girard-Perregaux Laureato Skeleton Ceramic we’re discussing today.

Girard-Perregaux’s original Laureato came out back in 1975, but it has been discontinued and re-launched a number of times since then. The modern company has become better known for haute horology pieces like their Three Bridge Tourbillon (hands-on here) and their Constant Escapement (hands-on). But as fine as such pieces are, they are priced in a realm beyond the grasp of most consumers. In an attempt to make the brand more accessible, Girard-Perregaux celebrated their 225th anniversary in 2016 by resurrecting their Laureato sports collection. 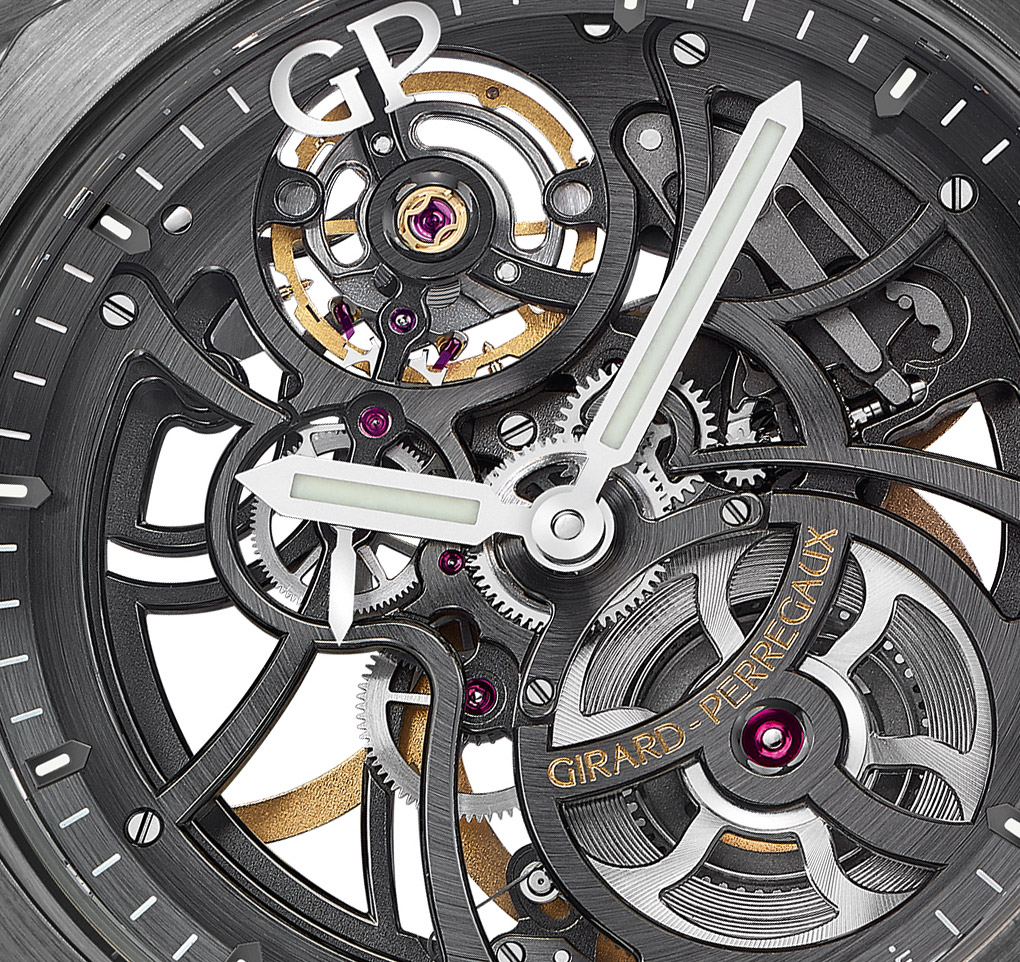 This new Girard-Perregaux Laureato Skeleton Ceramic seems to be a combination of two previous models, one cased in black ceramic we covered here, and another with a skeletonized dial that we’ve also covered here. Is this watch just an amalgamation of previous designs, or is it more than the sum of its parts? In order to define itself as an important timepiece, it should follow in the footsteps of the historic Laureato models and offer something unique and different for the brand.

The first Laureato was launched back in 1975, and it was a quartz watch. In fact, it was the first quartz watch to oscillate at 32,768Hz, which has now become the industry standard frequency. Accuracy was the brand’s main goal for this model, and it proudly proclaimed “Quartz Chronometer” on the dial. A mechanical Laureato wasn’t introduced until 1995 with the caliber GP 3100, an ultra-thin self-winding movement with a height of only 2.98mm. By way of comparison, Audemars Piguet’s Royal Oak was fitted with the thinnest full-rotor automatic caliber in the world when it was introduced in 1967 (the AP caliber 2121), a collaboration piece with Jaeger-LeCoultre which clocks in at 3.05mm. So both iterations of the Laureato were significant timepieces in their own right, pushing the boundaries of accuracy on the one side and engineering tolerances on the other. What does the Girard-Perregaux Laureato Skeleton Ceramic bring to the table?

Skeletonization is hardly a new discipline in watchmaking, but the execution here is very well-done. The bridges are black PVD treated and satin brushed to match the tone of the case, with chamfered edges throughout. The barrel is exposed to show the mainspring at about 2:30 on the dial, with “GIRARD-PERREGAUX” etched in gold across the traversing bridge. The balance wheel beats away at 12 o’clock behind a “GP” logo in steel, which I feel may be a tad redundant with the company branding already displayed in full across the barrel. The rotor is in 18ct pink gold and has also been skeletonized so as to not obstruct the view of the movement through the sapphire exhibition caseback. 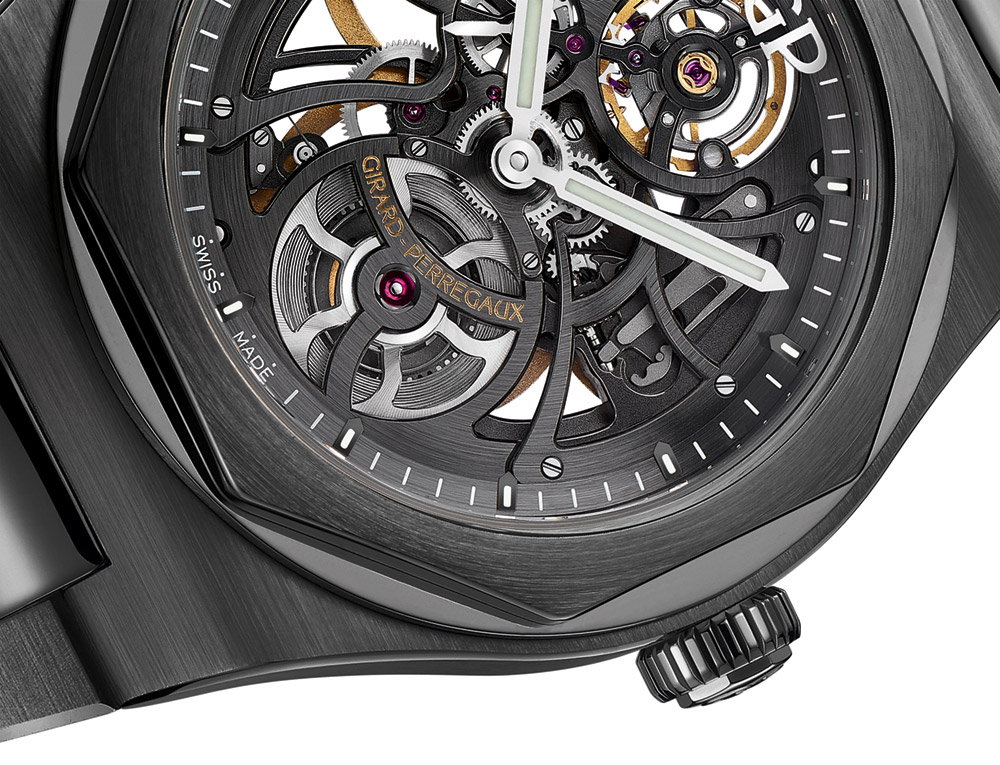 Some legibility is always sacrificed on skeletonized dials, and this is no exception. Nevertheless, the broad pointed hands each feature a long strip of luminescent material and contrast well against the black bridges of the movement underneath, which combined with the “floating” indexes make this timepiece readable. One minor aesthetic gripe of mine is that the minute hand isn’t quite long enough to reach the minute track, which doesn’t particularly harm legibility but feels a tad clunky from a design perspective.

The movement powering this watch is the GP01800-0006, a much thicker descendant of the GP 3100 at 5.40mm. The balance of this movement oscillates at a modern 28,800vph or 4Hz, and offers a 54 hour power reserve. A discreet small seconds indicator is also included at 10 o’clock. Like the previous models, this watch is 42mm wide and 10.93mm thick, which should wear quite well. The sapphire crystal over the dial is coated with an anti-reflective treatment on both sides, and the watch is waterproof to 100m.

Aside from the skeletonized dial, the other major feature of the Girard-Perregaux Laureato Skeleton Ceramic is the use of an all-ceramic case. Ceramic is certainly very interesting as a watchmaking material, and we’ve gone into depth about its properties previously. In a nutshell, it offers very high scratch-resistance, low weight, and is hypoallergenic, in exchange for being brittle and prone to shatter if struck hard enough. The case and bracelet are alternatively polished and satin-brushed to provide some visual and tactile contrast to the all-black palette. So if this latest Girard-Perregaux Laureato Skeleton Ceramic watch is largely defined by the extensive use of ceramic and skeletonization, where does that position it against other Laureato models, and against the competition?

Octagonal bezel, Genta-designed (or -inspired) watches are almost their own market segment these days, with numerous takes on the theme by Audemars Piguet, Patek Philippe, IWC with its Ingenieur, Bulgari with the Octo collection, and others. Some of these even feature black ceramic or diamond-like carbon (DLC) coated cases for a similar aesthetic. But fewer competitors feature geometric bezels, black ceramic or DLC cases, and are skeletonized; the only other model I know of is Bulgari’s Octo Finissimo Skeleton reference 102469. So with regards to the competition, the Girard-Perregaux Laureato Skeleton Ceramic is rather unique and well positioned. 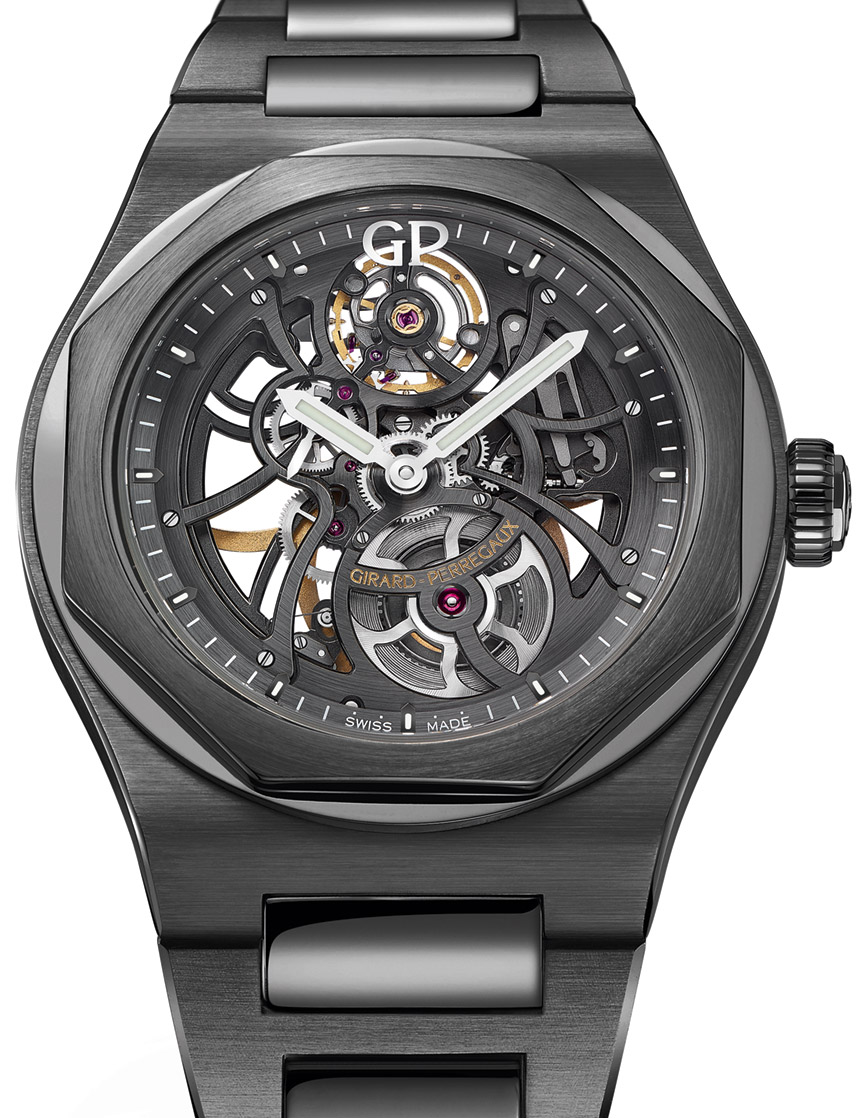 Among its own collection though, this model is a harder sell. The existence of both skeletonized and ceramic models makes the Girard-Perregaux Laureato Skeleton Ceramic seem an iterative release rather than anything truly new. And unlike the landmark versions of 1975 and 1995, this version doesn’t push the envelope of either accuracy or engineering tolerances. I would have loved to see a high-beat movement or a clever escapement technology at play here, to make this model feel more like a pillar in the collection and not just a new color scheme against an exposed movement. Nevertheless, it can’t be denied that there are few other options out there for the rare consumer who demands the unique combination of traits on offer here, and as a package the Girard-Perregaux Laureato Skeleton Ceramic appears both attractive and wearable. Although with an asking price of $36,600, this piece is up against some strong – albeit different – competition. girard-perregaux.com