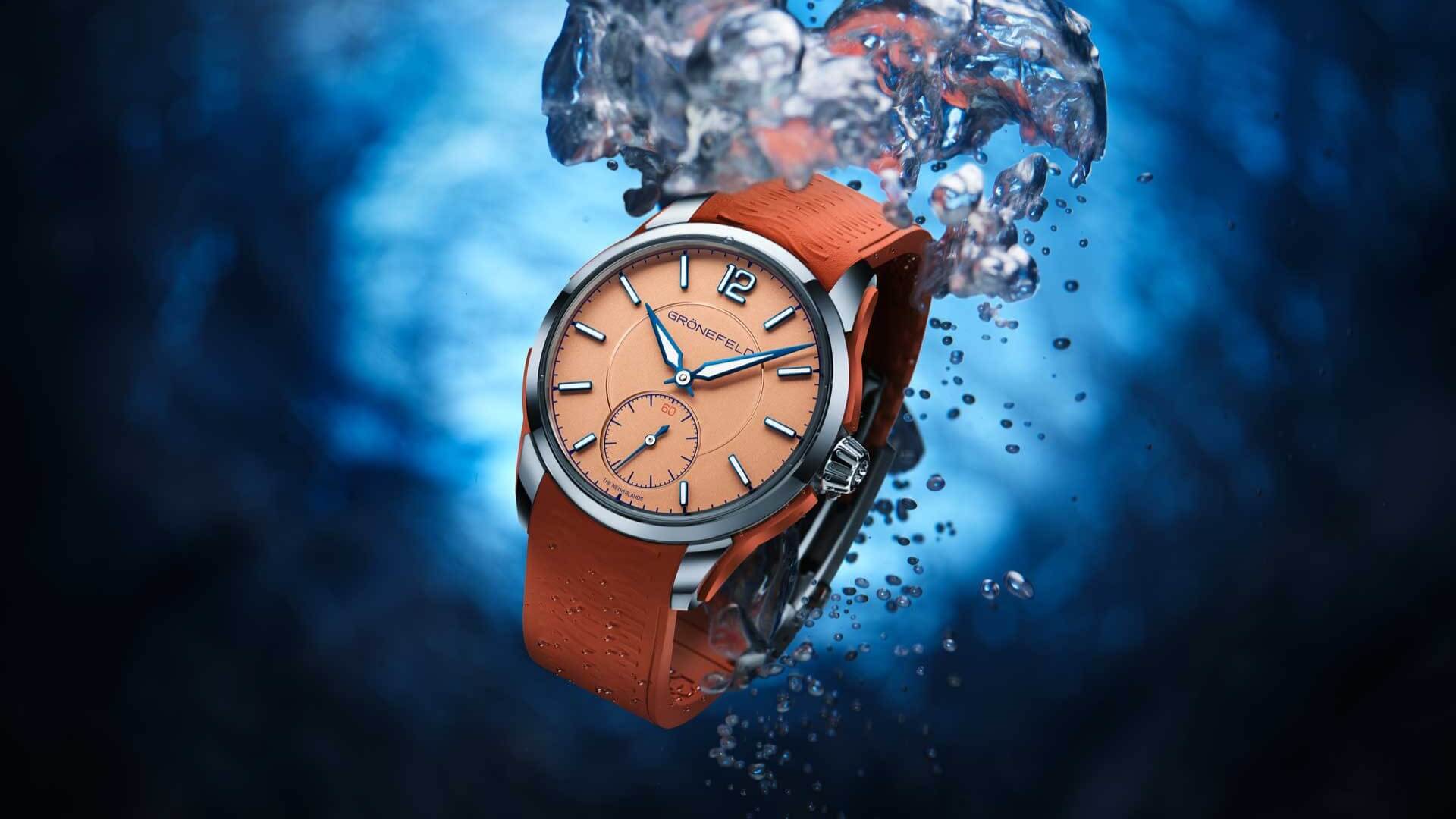 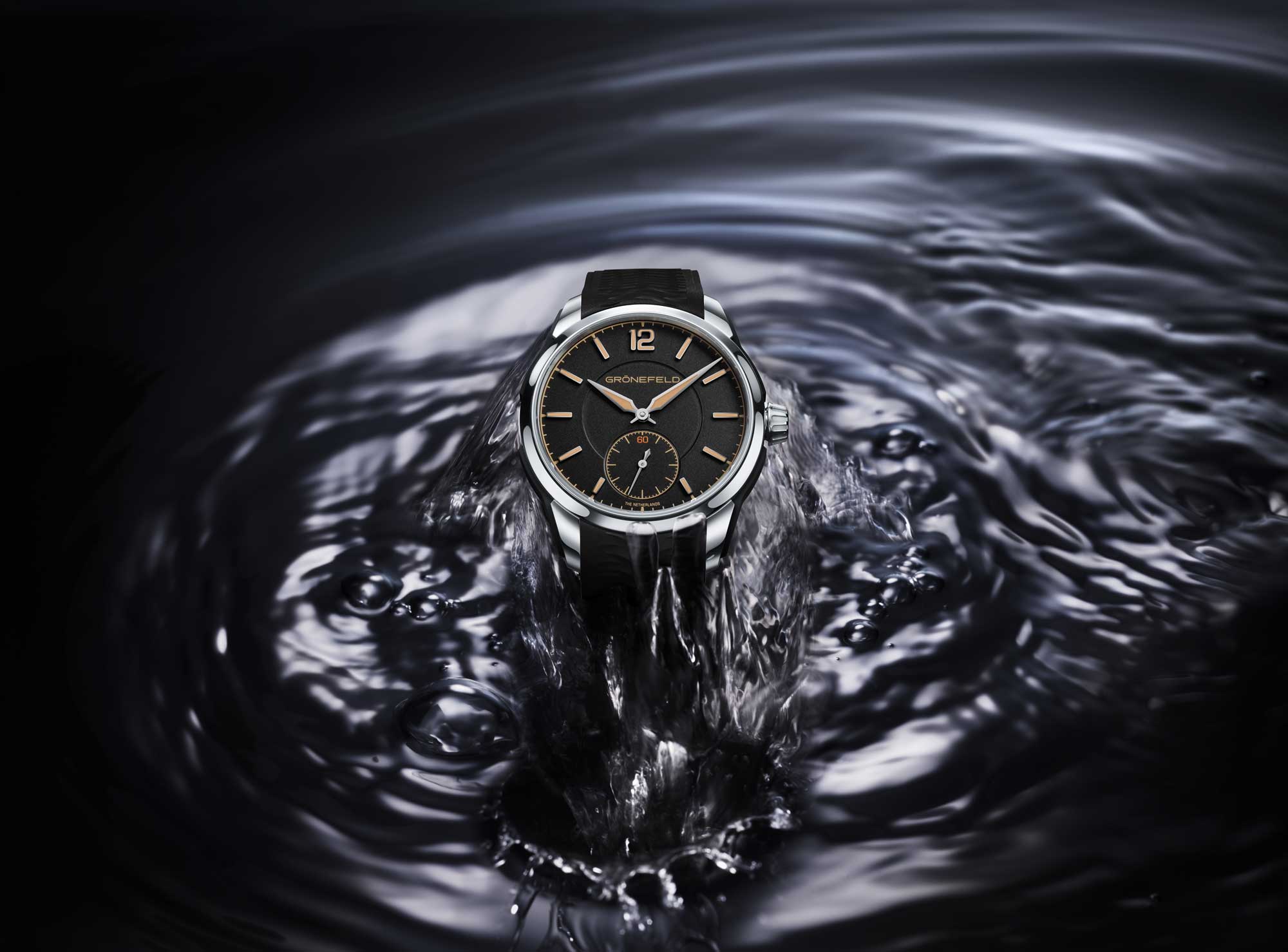 When a haute horlogerie watchmaker says it’s made a sports watch, there’s an understandable suspicion with which one receives the announcement. Consider the MB&F Aquapod or the F.P. Journe Linesport collection, watches that feature the visual cues of sports watches without the durability or practicality. Exceptional watchmakers tend to create sports watches in name only, not in function. So, when Grönefeld—the Dutch “Horological Brothers”—announced its 1969 DeltaWorks this week, it begged more scrutiny than your run-of-the-mill sports watch. Bart and Tim Grönefeld, after all, are known for exceptionally finished watches with some of the most stunning movements on the market. What they are not known for is creating sports watches. In a sense, the idea of a sports watch is antithetical to haute horlogerie watchmakers like the Grönefelds: With a handful of exceptions, the upper echelons of watchmaking traditionally deal in precious metals, modest proportions, and delicate movements. So how, then, did Grönefeld aim to go about making a sports watch? 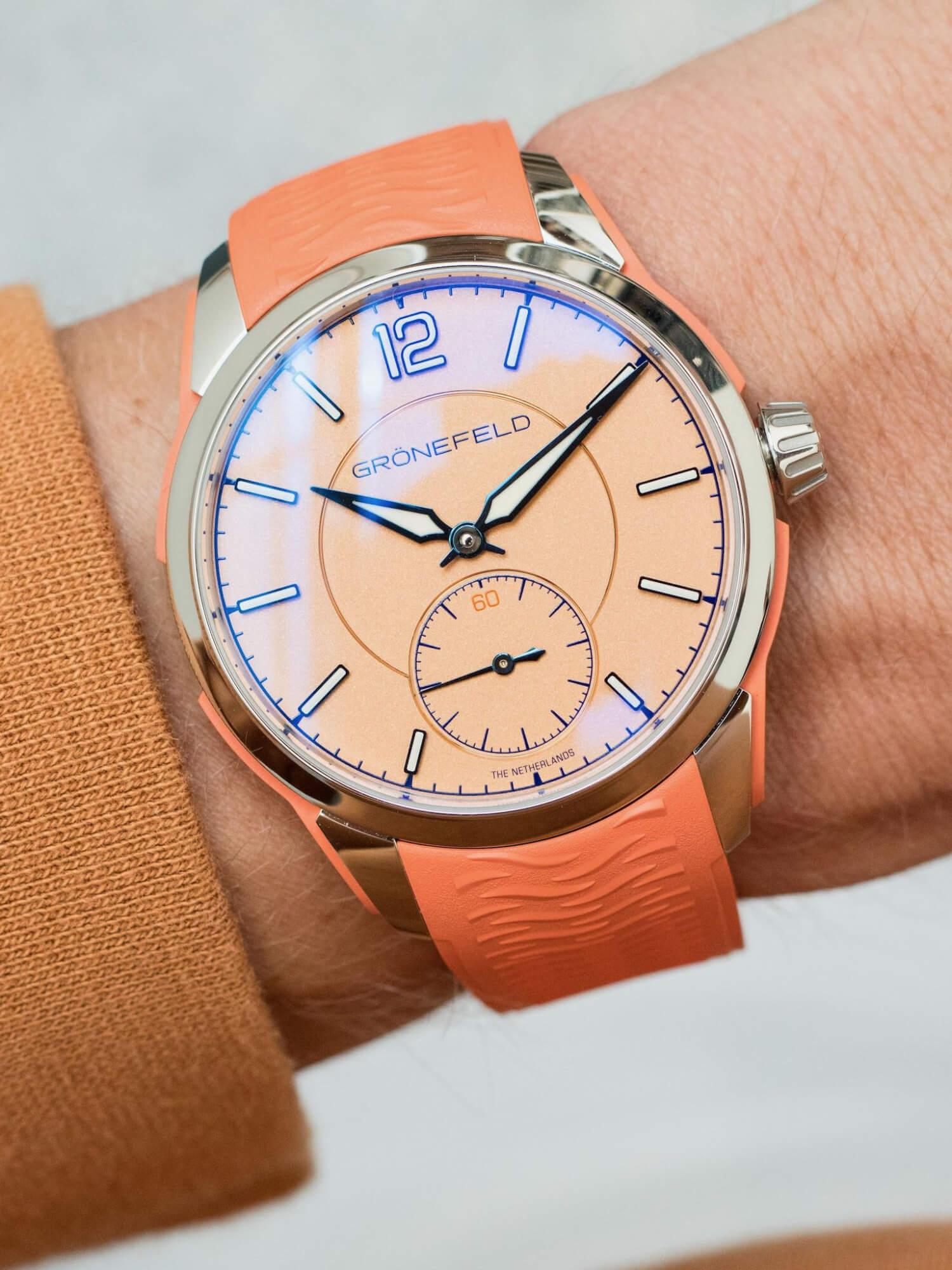 The dial is arguably the most Grönefeld thing about the 1969 DeltaWorks. While salmon dials have been popular, it seems that the brand has made it almost a signature color, offering it in many of its collections. But the DeltaWorks also brings just the third black dial the brand has offered and an entirely new colorway with the two-tone salmon and sand dial (which Grönefeld calls “Khaki”). The dial is a sportier take on Grönefeld’s 1941 Prinicpia dial, with fine graining and a recessed center, updated with applied baton markers and a 12 o’clock numeral. The markers and Grönefeld’s signature lancette hands are filled with top-grade Super-LumiNova, a first for the brand. The hands and indices are hand-blued with the fulcrum black polished; on the black dial, the hardware is polished steel and the lume appears to be Old Radium. The name of the game in sports watch dials is (or at least should be) legibility, and that’s been achieved here with only a few small tweaks to an existing dial. 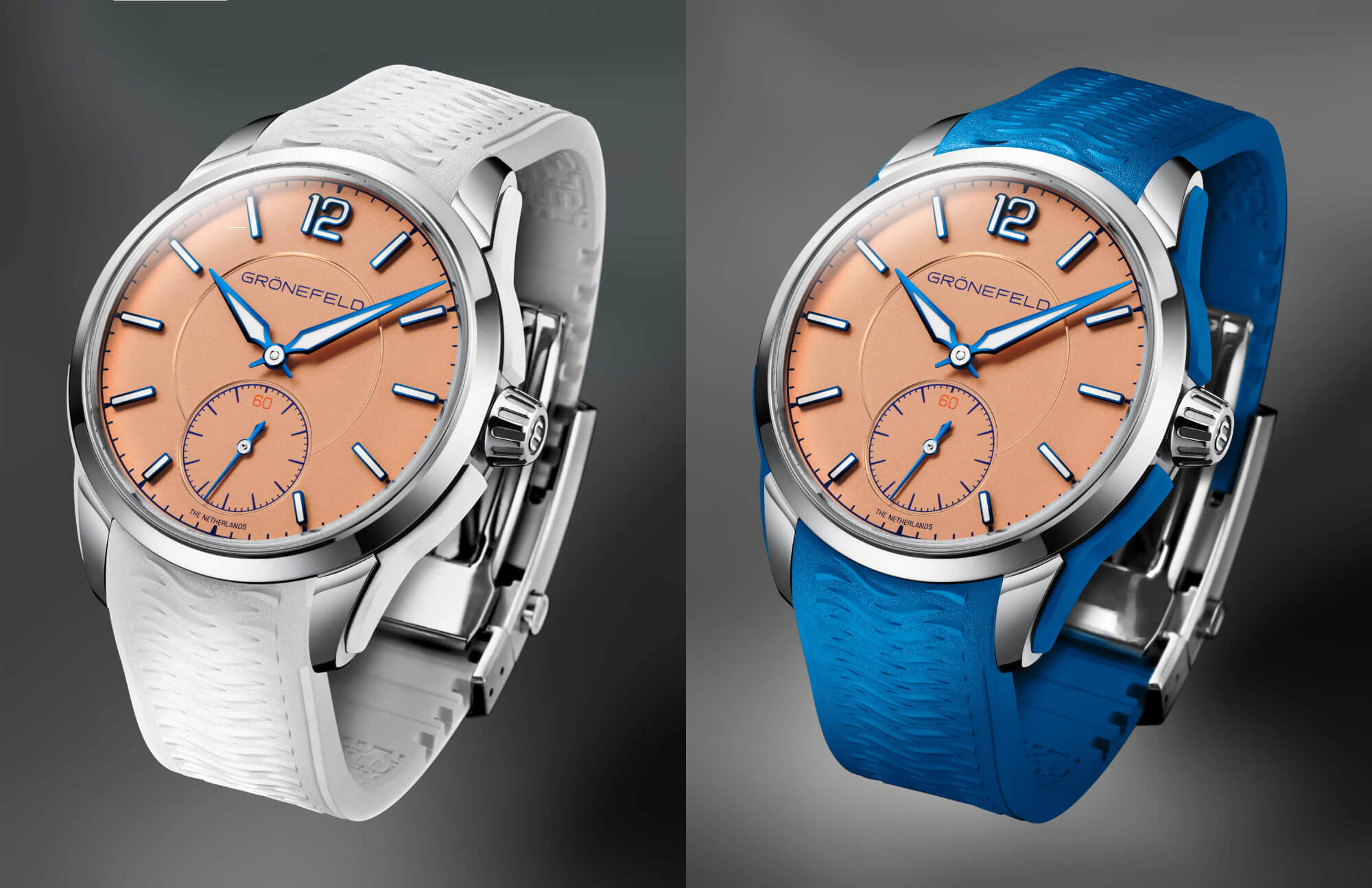 It’s the case, though, where the Grönefeld 1969 DeltaWorks really stands out, not just from its peers, but from almost every sports watch I’ve seen to date. It’s one thing to produce an exceptional case, and another to create something novel. Grönefeld has introduced a new and not-at-all-small 44.5mm case to its lineup, with rounded lug tips, and, most notably, inserts along the sides. Certainly, we’ve seen rubberized cases, Cerakote, and other materials used, but Grönefeld’s elements are unique. Some may suggest that it sullies the luxury of the object, but this is an intentional sports watch, and the inserts serve that purpose. While you can opt for simple stainless steel to match the case, Grönefeld offers five colors of FKM-coated titanium that match the strap selected (orange, blue, white, black, green). These are secured to the case (they cannot be removed or changed) and provide additional protection from the perils of adventure while also allowing the wearer to worry a bit less about mucking up his or her expensive watch. The 12.5mm-thick case is completed with a screw-down crown that aids in achieving 100m water resistance (with a logo that is always oriented upright when screwed in) and a thicker-than-usual domed sapphire crystal. The fitted strap is made from FKM rubber for exceptional comfort, with a wave motif on the top and partial vacuation on the back for airflow. The strap is secured with a folding clasp with 9mm of rapid micro-adjustment. Of course, at this level of watchmaking, the option for customization is expected, and buyers will have the opportunity to choose their dials, straps, and insert type, with rubber inserts matching the strap color chosen. 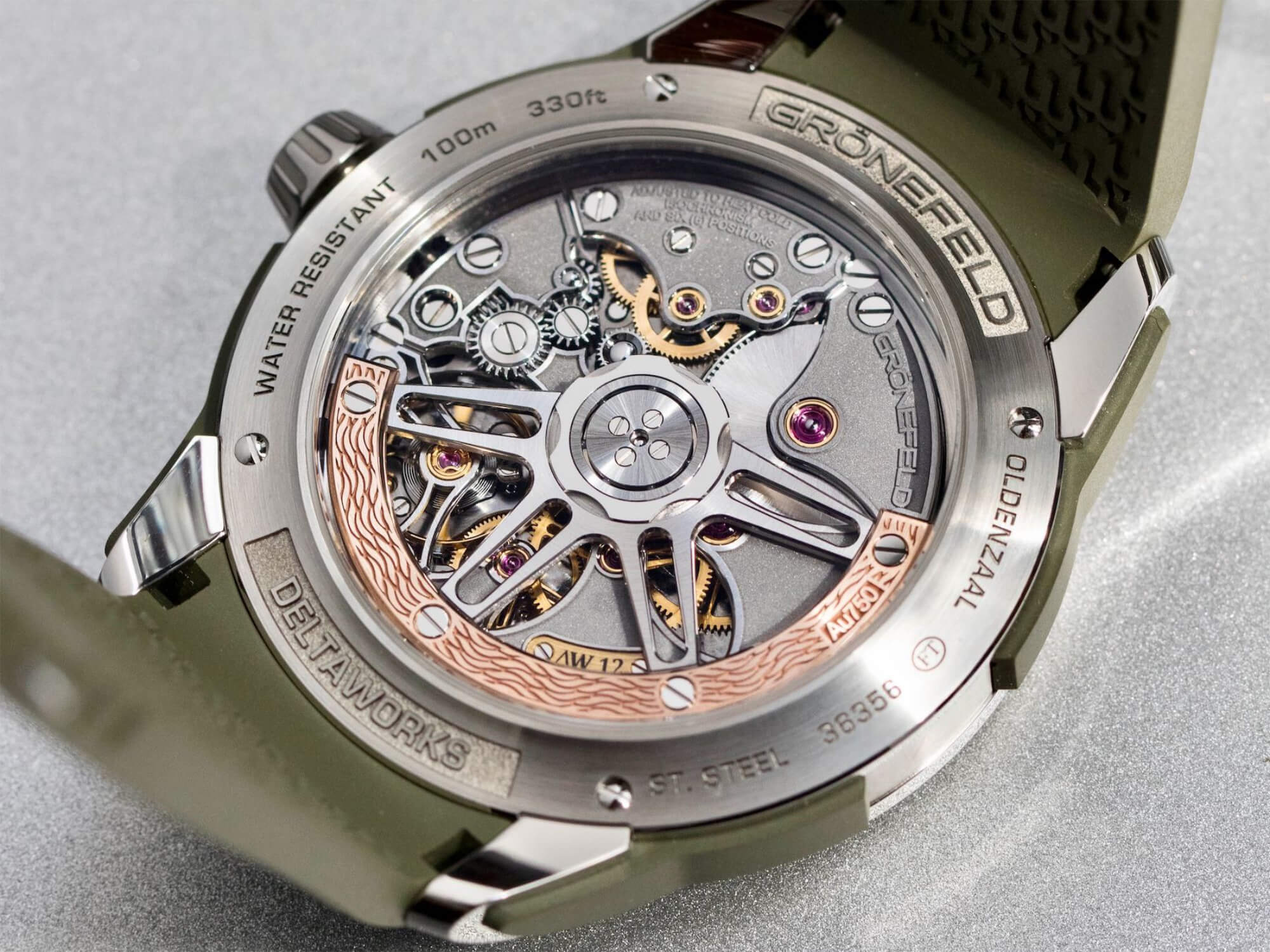 The 1969 DeltaWorks runs on the Grönefeld Calibre G-06, finished by hand to the same standards as every Grönefeld movement. The movement is the same that powers the 1941 Principia Automatic, and features the brothers’ trademark double-arm gear train and hand-finished stainless steel bridges with microblasting bodies and polished bevels (the bridges are made to resemble the bell gable roofs of Dutch homes). The double-arm rotor with an 18k gold weight echoes the gears and is hand-finished as well, and its form and the ceramic ball bearing mount provide additional shock protection; the peripheral weight shares the wave motif with the straps. The movement features a free-sprung balance, 31 jewels (some set in gold chatons), and a 56-hour power reserve at 21,600 vph. While the case and strap are pure sport, the movement is a concealed reminder (albeit beneath a sapphire crystal) that the watch is made by one of the finest watchmaking houses in the world. 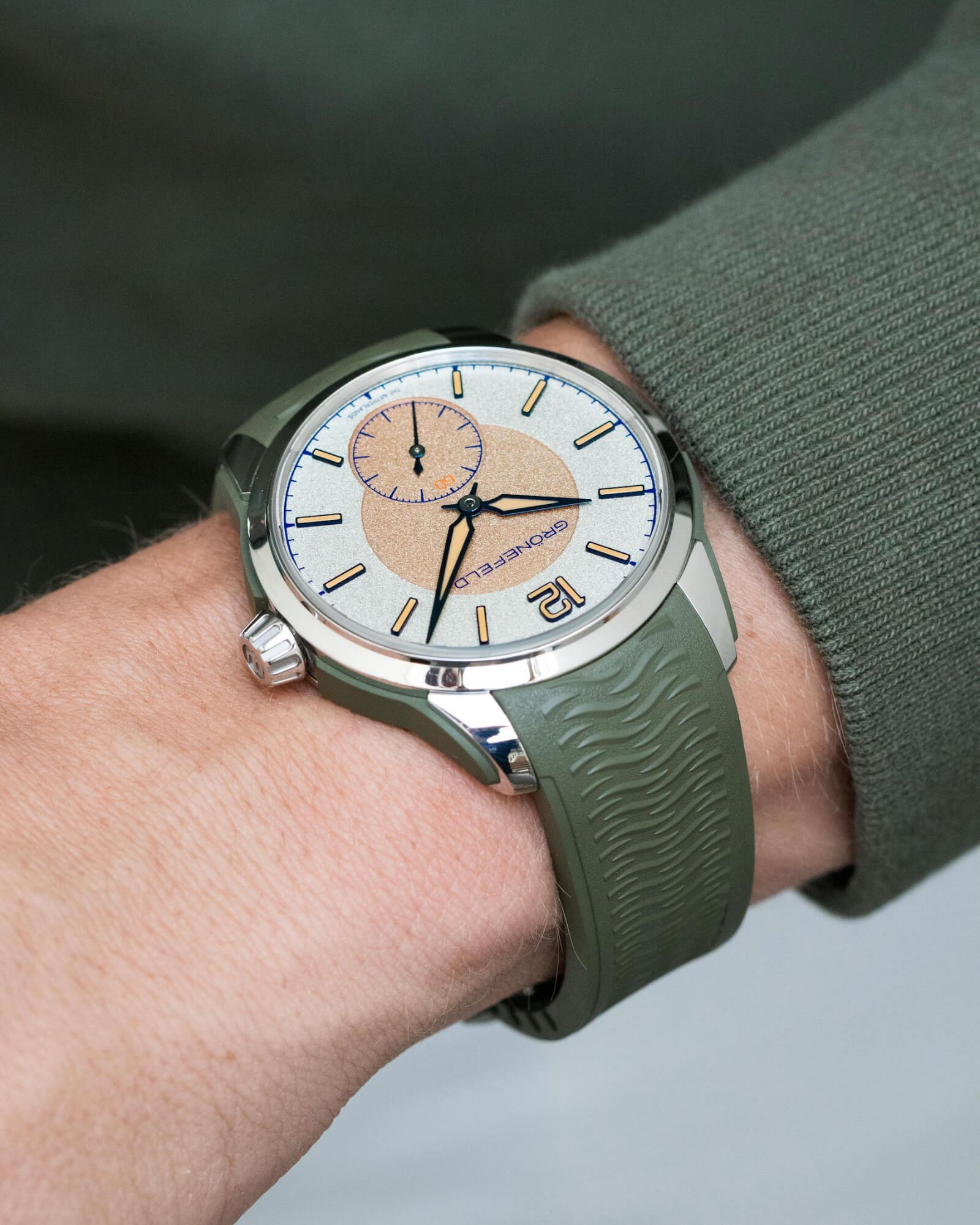 You can begrudge the price, perhaps even the water resistance and size, but denying that Grönefeld has managed to find the balance between the pinnacle of watchmaking and the practicality of sports watches would be foolish. While maintaining the brand’s DNA, the Horological Brothers appear to have done what few others in their league have: released a proper sports watch. Purchasing, it should be noted, requires a 30% deposit followed by an unspecified wait while the watch is produced and delivered. Further, while the watch is not specifically limited, production will be capped at 20 pieces per year due to capacity. The Grönefeld 1969 DeltaWorks is priced at EUR 49,800. For more information, please visit the Grönefeld website.