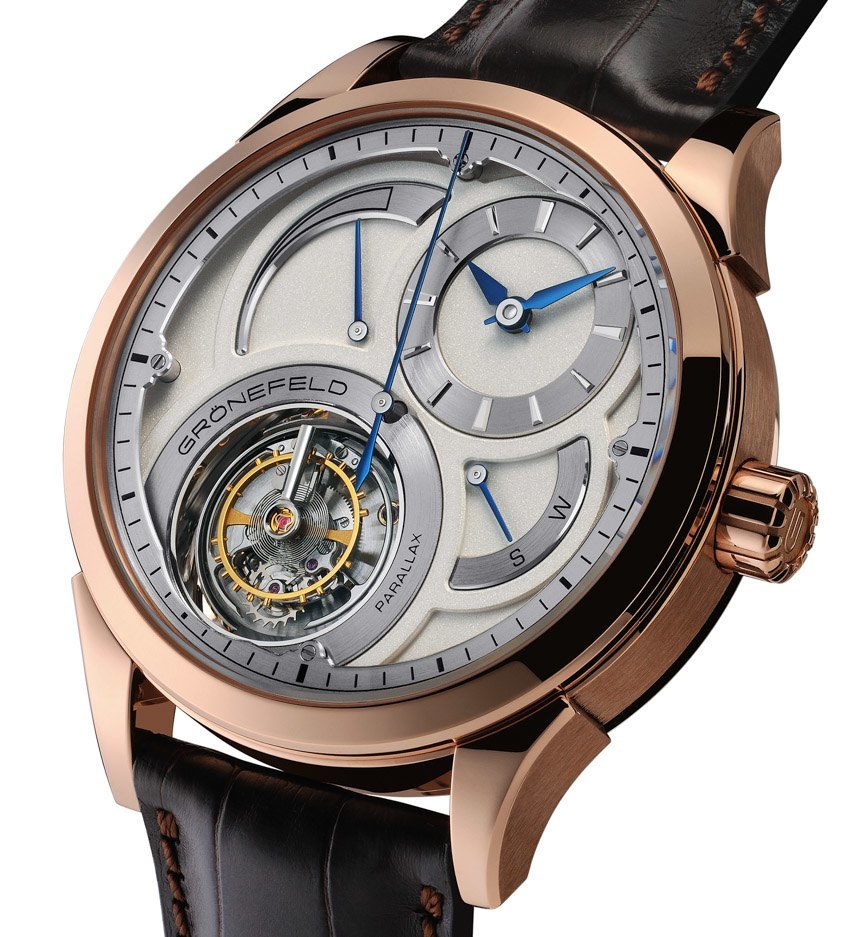 Thus far, the independent Dutch watch brand of Grönefeld had two distinctly different watches in their portfolio: their debut piece from 2008, which is a highly complicated and rather crazy-looking minute repeater tourbillon, and the One Hertz from 2010, which thanks to its unique design dead-beat seconds hand procured the attention of watch enthusiasts. But that was four years ago, and so it was just about time that they showed us a new piece, something that illustrated what direction the brand has been taking. The answer to that question was revealed at Baselworld 2014 in the form of the Parallax Tourbillon, a novelty that carries on some trademark Grönefeld design cues and introduces us the Grönefeld brothers’ idea of the perfect tourbillon. 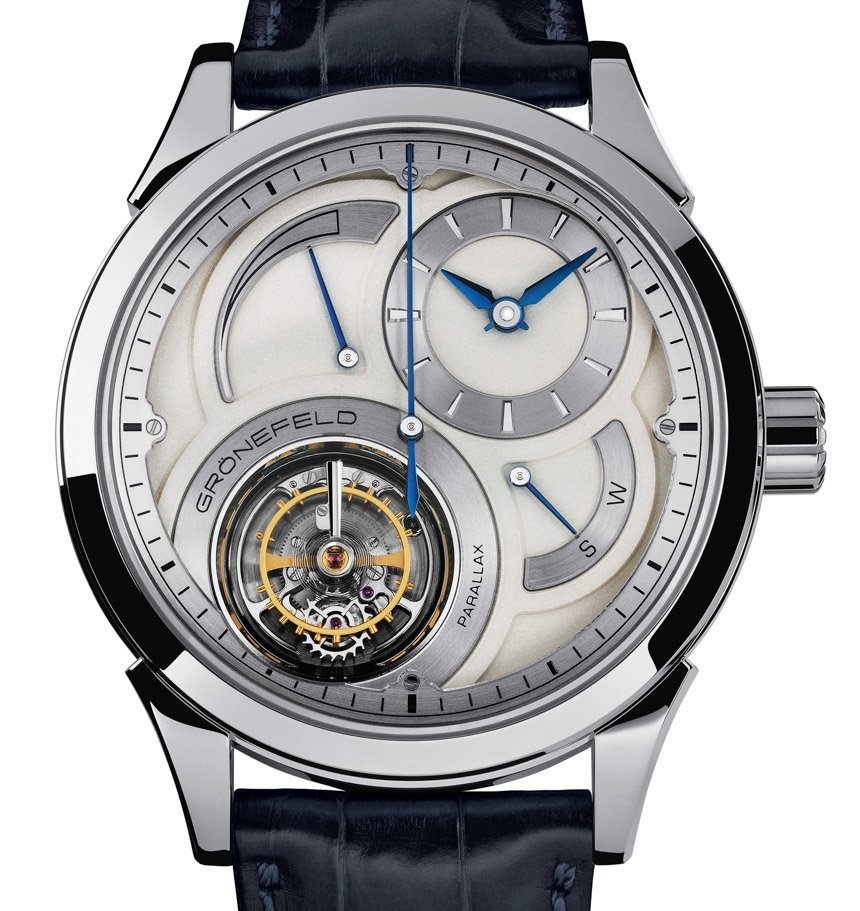 The centerpiece of this novelty is indeed the dial and the large flying tourbillon, as highlighted in a substantially sized, silver-outlined opening at the 7 o’clock position. The dial is cut from solid silver and sports polished beveled edges and flame-blued steel hands that indicate the hours, minutes, seconds, the 72 hours of power reserve and the  selected function of the crown. The tourbillon is more traditional than the rather industrial-looking dial: it lacks any sci-fi inspired materials in its construction and makes a full rotation at the traditional pace of 60 seconds. What makes it rather unique, however, is the fact that it actually hacks, meaning that upon selecting the time-setting mode on the crown–there is a reason why I chose not to say “pulling out the crown”–the balance wheel, and in fact the entire tourbillon cage, are stopped.

It is no secret that manufacturing an accurate and reliable tourbillon was–and still is–a task difficult enough to keep most brands away from making additional modifications to it. That more or less explains why we scarcely, if ever, see highly re-engineered versions of the traditional single-axis version. However, as an interesting coincidence, let’s call it that, A. Lange & Söhne has just very recently debuted the 1815 Tourbillon (hands-on here) with a similar mechanism, meaning that the single-axis tourbillon of the 1815 also hacks and resets. And while you could rightfully point out that hacking is a common feature on most conventional watches (and you would be right), it is a much more challenging task to implement for a tourbillon mechanism. Here is how Grönefeld’s idea works. 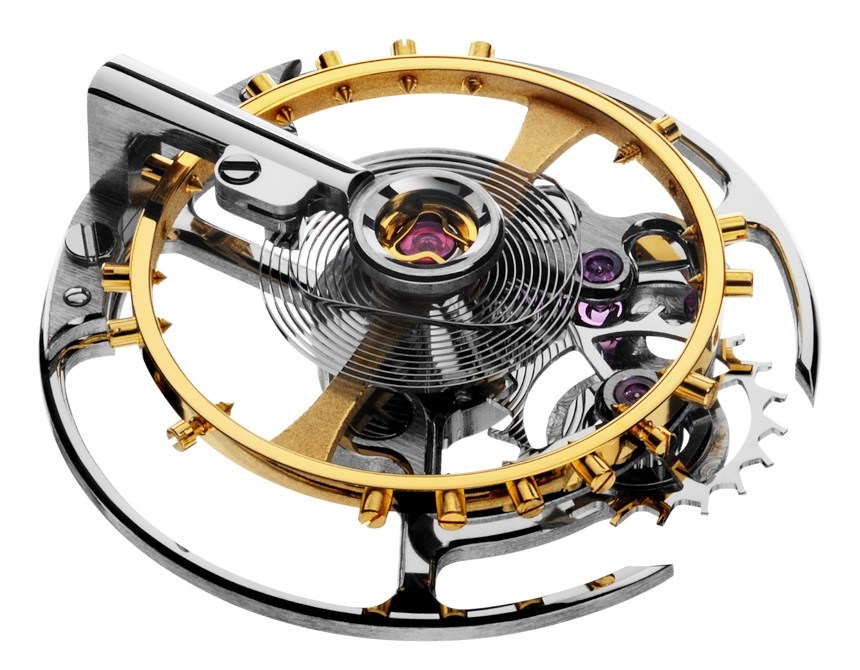 The movement operates in a rather complex way, so much so that it took some consulting with Tim Grönefeld (one of the founders of the brand) to fully reveal what the G-03 in-house caliber actually does. First of all, the watch is wound and set through the crown but, as I implied further above, the crown functions differently than most traditional watches: instead of having to pull it out to select the time-setting “mode,” the crown on the Parallax is pressed to switch between winding and setting the movement. In order to avoid confusion, a display is located on the dial at the 5 o’clock position, with a hand pointing to the selected function. When it points to ‘W’, the movement can be wound, however, after pressing the crown it switches to “S” for time setting – and this is when the rather unique hacking system comes into play.

Unlike in case of the 1815 Tourbillon of Lange, where the the tourbillon is stopped and then reset immediately after pulling out the crown, the tourbillon and the large central seconds of the Parallax keep on moving until they reach the 60 (i.e. the 12 o’clock) position. It is only once they point “upwards” that they hack, and remain stationary until the time has been set and the crown has been pressed again to return to the winding mode. It is remarkably interesting to see how a major brand which is Lange and a small independent of Grönefeld set for themselves, and tackled, the exact same task in slightly different ways. While Lange’s 1815 Tourbillon relies on immediate action made possible by heart shaped cam, as is used in the reset function of mechanical chronographs, the solution by Grönefeld uses a different approach and makes for a less instant, albeit nonetheless effective solution. It would be tough to say whether the snappy action of the Lange or the “magically” stopping tourbillon and hand of Grönefeld is the more compelling – what we do know however is that both of them are technically hugely impressive indeed. 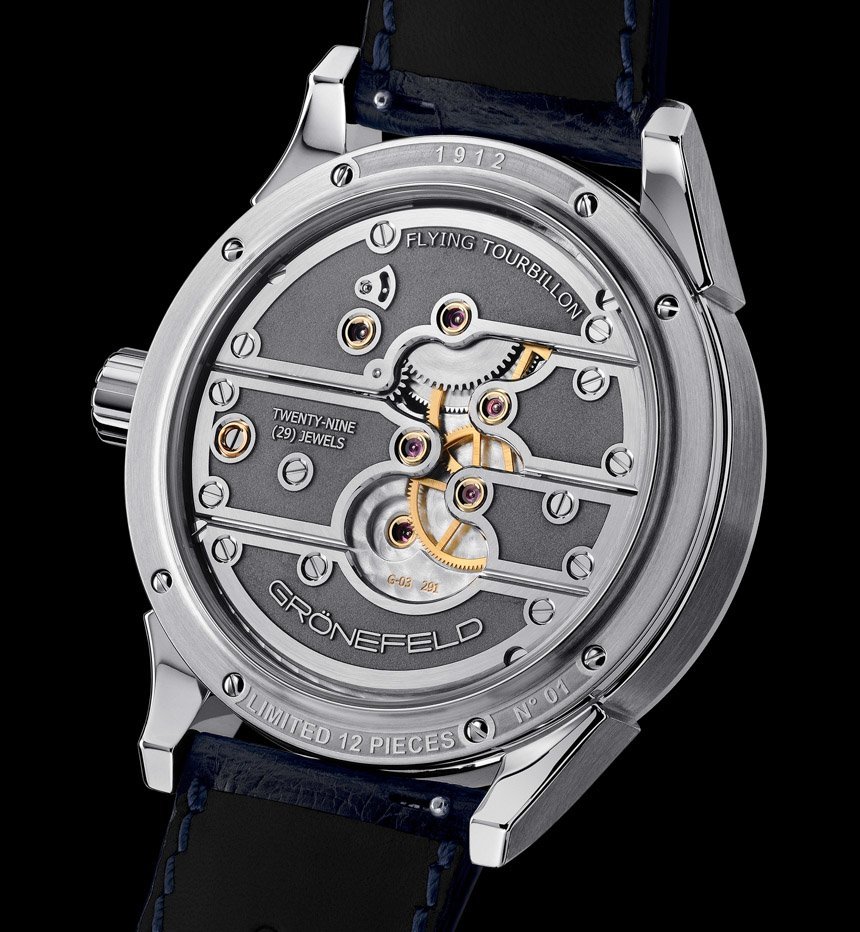 A downside to those timepieces that display the tourbillon on the dial side–and hence also to the in-house caliber of the Parallax–is that they do not showcase much eye-candy when viewed through the case back. The way Grönefeld tries to compensate for such aesthetic penalties is by displaying a number of bridges and cocks on the back of the movement, all done in stainless steel instead of the much more common brass, and all hand-polished, micro-blasted and relief engraved. This sounds (and in fact looks) promising, save for the array of 13 screws securing the components, along with another eight which are holding the case back in place. Having said that, shaping and decorating stainless steel is a considerably more difficult task than brass certainly offers a number of appreciable improvements over the latter, more traditional material. The extra effort is rewarded by a more thorough shine that is present in case of polished stainless steel (when done right, that is), and also a greater resistance to rust.

The Parallax will be housed in a 43 millimeter wide and 12.5 millimeter tall case executed in either stainless steel (limited to 12 pieces only) or red gold, of which 28 numbered pieces will be made. Hacking a tourbillon, as enticing it may sound, also comes at a price: the steel version will go for $185,380, while its red gold counterpart is priced in at $189,795. gronefeld.com