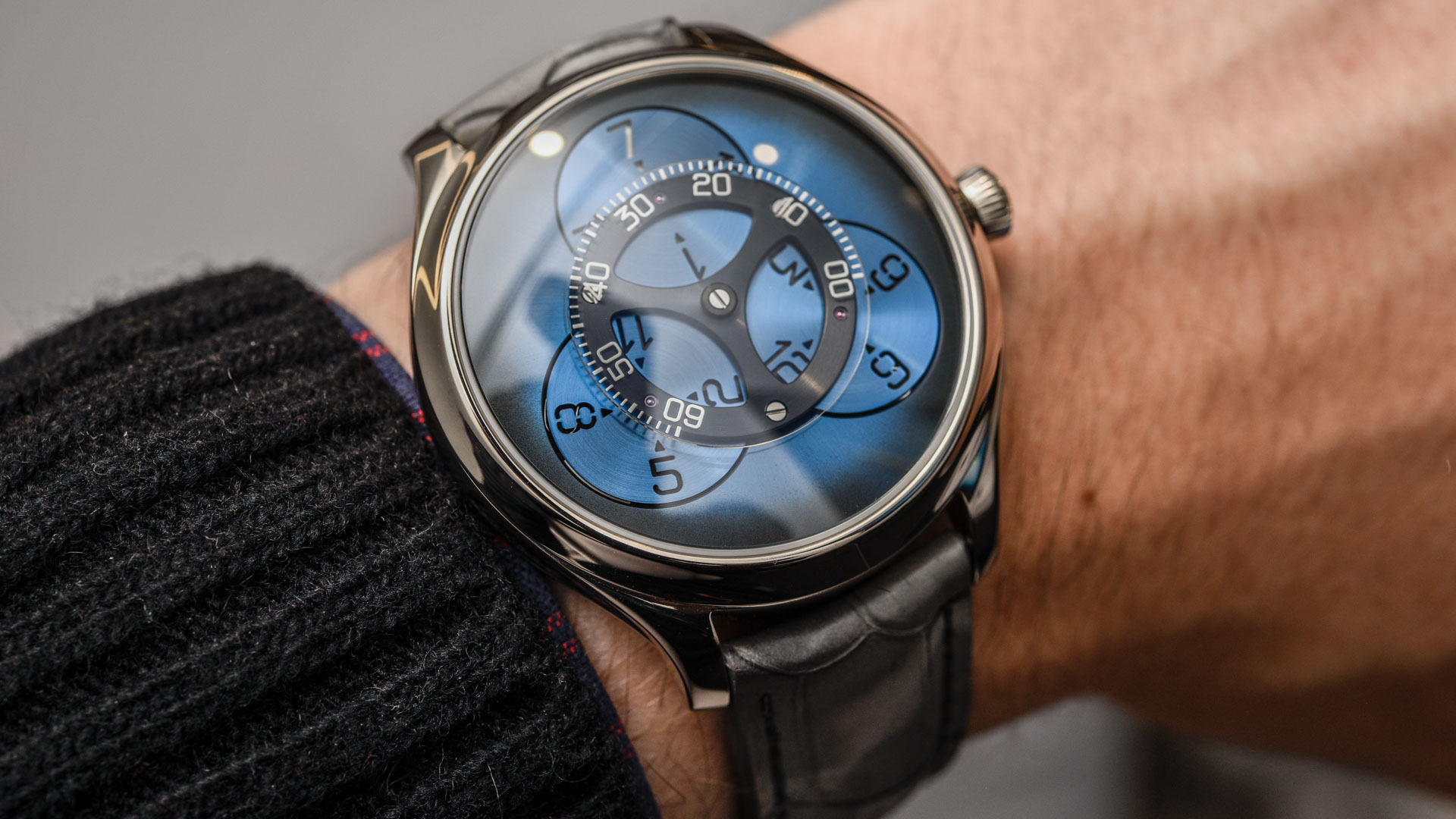 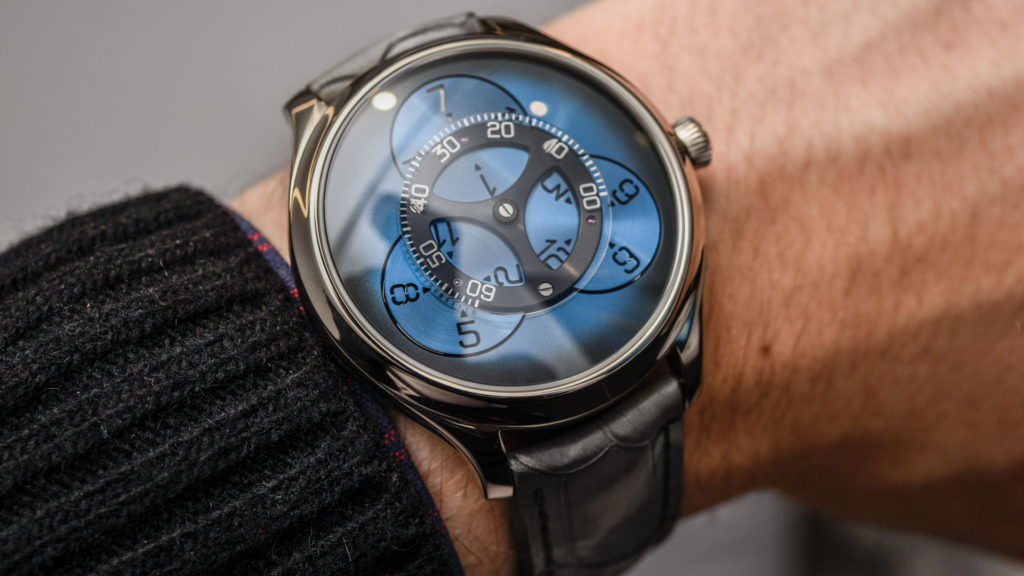 Swiss H. Moser & Cie. are known for their beautifully minimalist yet complicated timepieces, exemplified by watches like the Endeavour Perpetual Calendar Concept we covered here. Whenever I see a new H. Moser & Cie. watch, this is the kind of watch I’m expecting: their unique spin on a traditional high complication. The H. Moser & Cie. Endeavour Flying Hours takes this concept to the next level, reinventing the “wandering hours” complication whilst maintaining the brand’s signature style. We covered this watch briefly when it was announced for SIHH 2018, and here I am going to discuss how this watch works and why it’s a significant development for the brand. 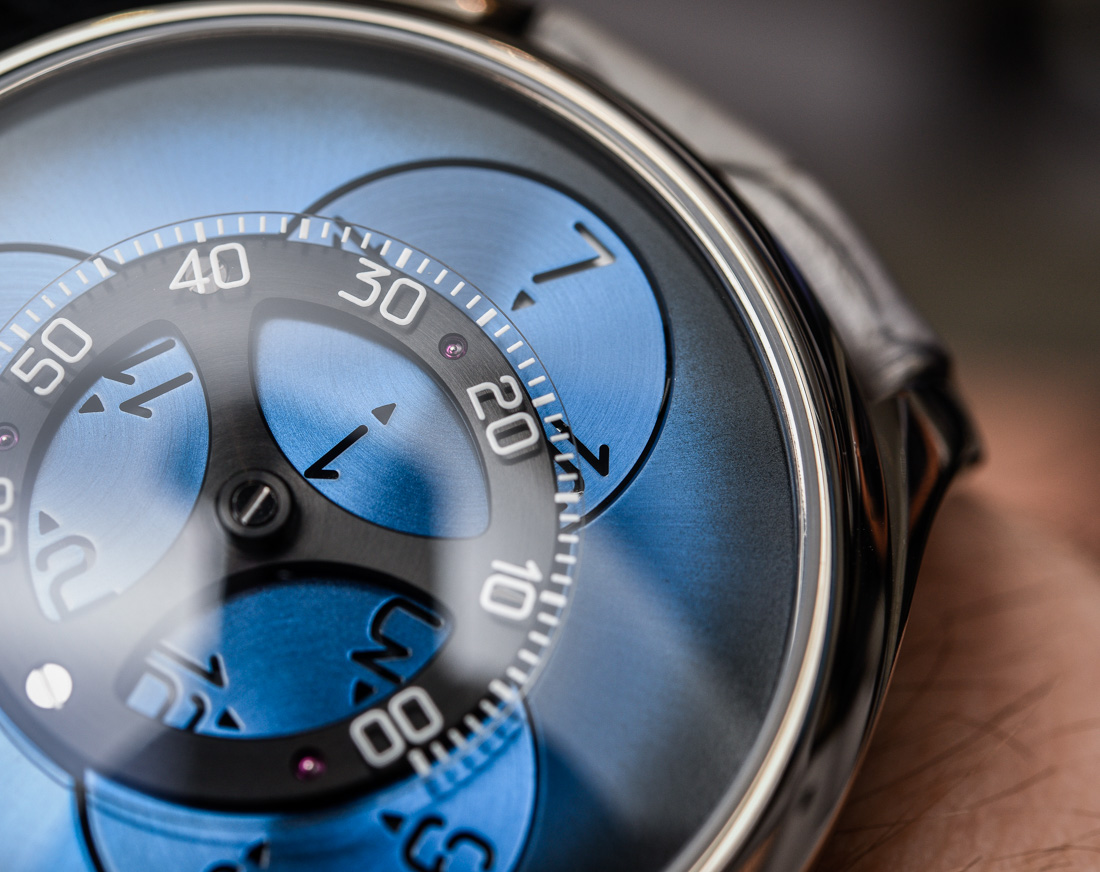 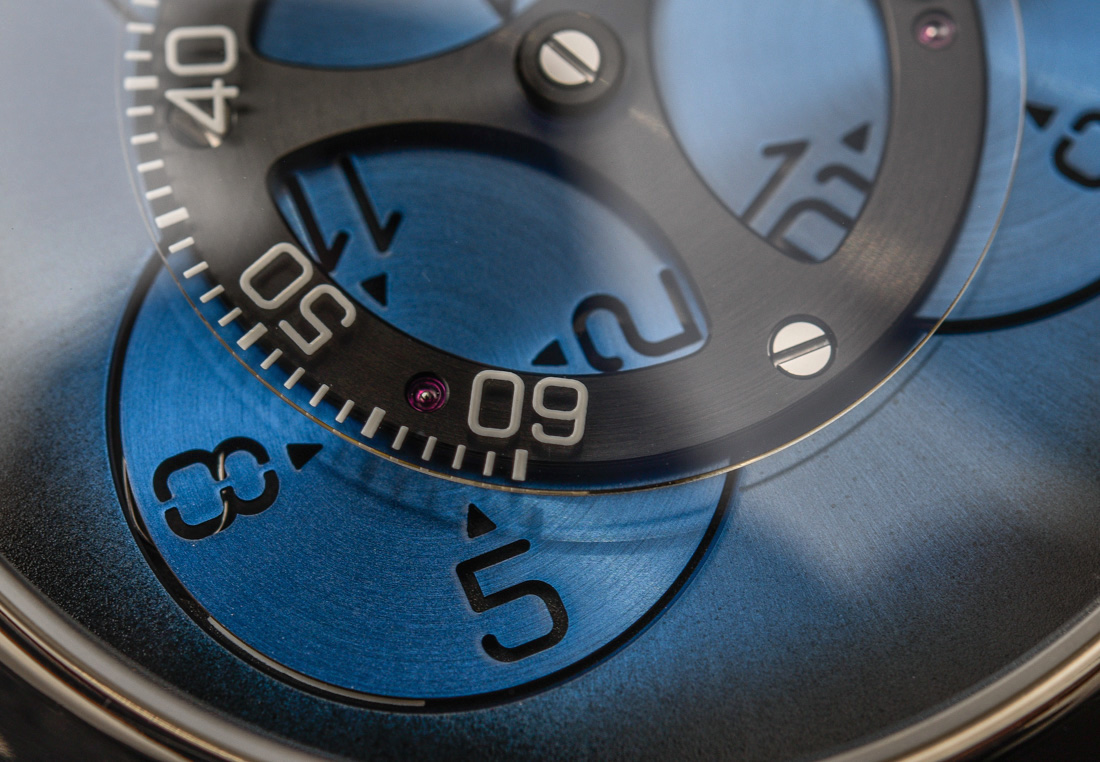 H. Moser & Cie. are part of a family-run company called MELB Holding, which is led by former Chief Executive of Audemars Piguet, Georges-Henri Meylan. MELB Holding also owns Hautlence, a luxury watchmaker with a focus on new and innovative ways to display the time, and Precision Engineering AG, an escapement and balance spring manufacturer. In many ways the H. Moser & Cie. Endeavour Flying Hours is a product of the synergy between these sister brands. The new C806 calibre powering this watch was developed and produced jointly between H. Moser & Cie. and Hautlence, while the escapement and balance spring were produced by Precision Engineering AG. The overall look of this watch is unmistakably H. Moser & Cie. with the “Funky Blue” fume dial and the lack of any extraneous information dial-side, while the new take on a wandering hours time display is just the sort of thing you’d expect to see on a Hautlence timepiece. 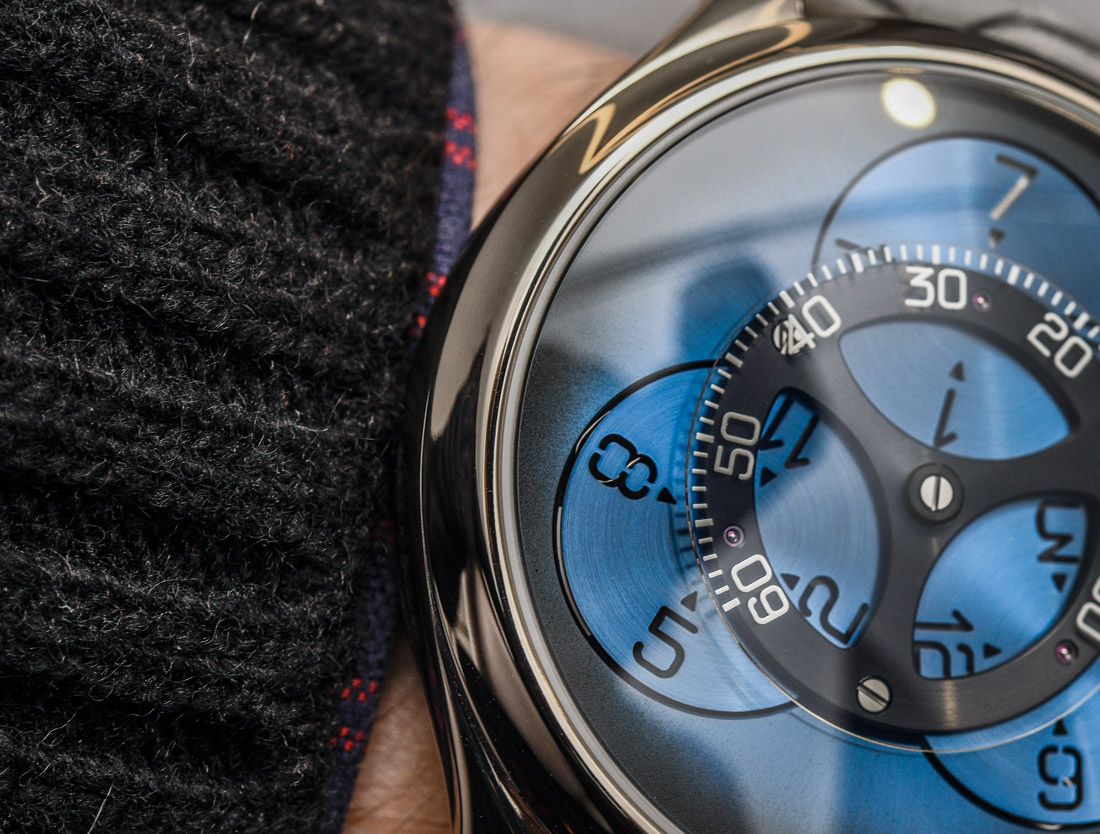 The wandering hours complication certainly isn’t new, with one of the earliest examples being the Tabernacle Night Clock, built by the Vatican clockmaker Pietro Tommaso Campaniin in the 17th century for Pope Alexander VII of Rome. Audemars Piguet were one of the first watchmakers to reinvent the wandering hour complication in 1991 with the “Star Wheel,” which used a system of three transparent discs mounted on star-shaped wheels (from which the watch derives its name) that are in turn affixed to a rotating center wheel which moves the discs across a fixed 120-degree minutes track. Each disc featured 4 numerals (for twelve in total) and could rotate independently on the center wheel to advance the hours after each full revolution. A modern example of this complication is the Arnold & Son Golden Wheel (which we covered here), also featuring a central second hand with “dead-beat seconds” complication. 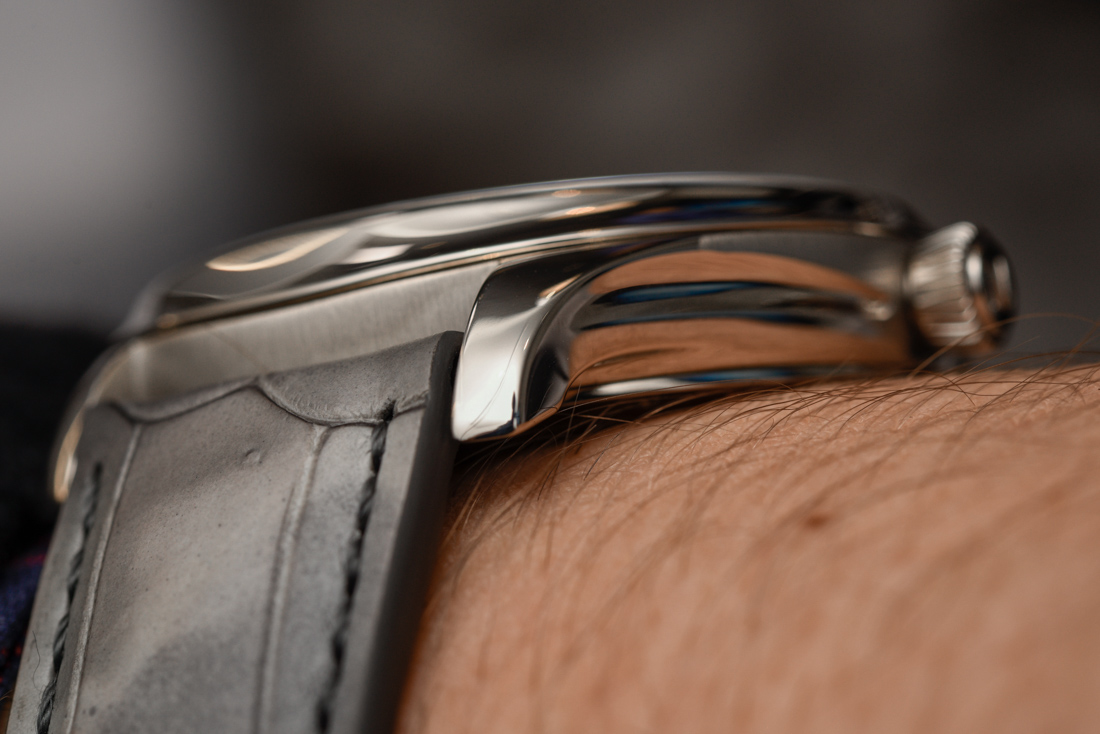 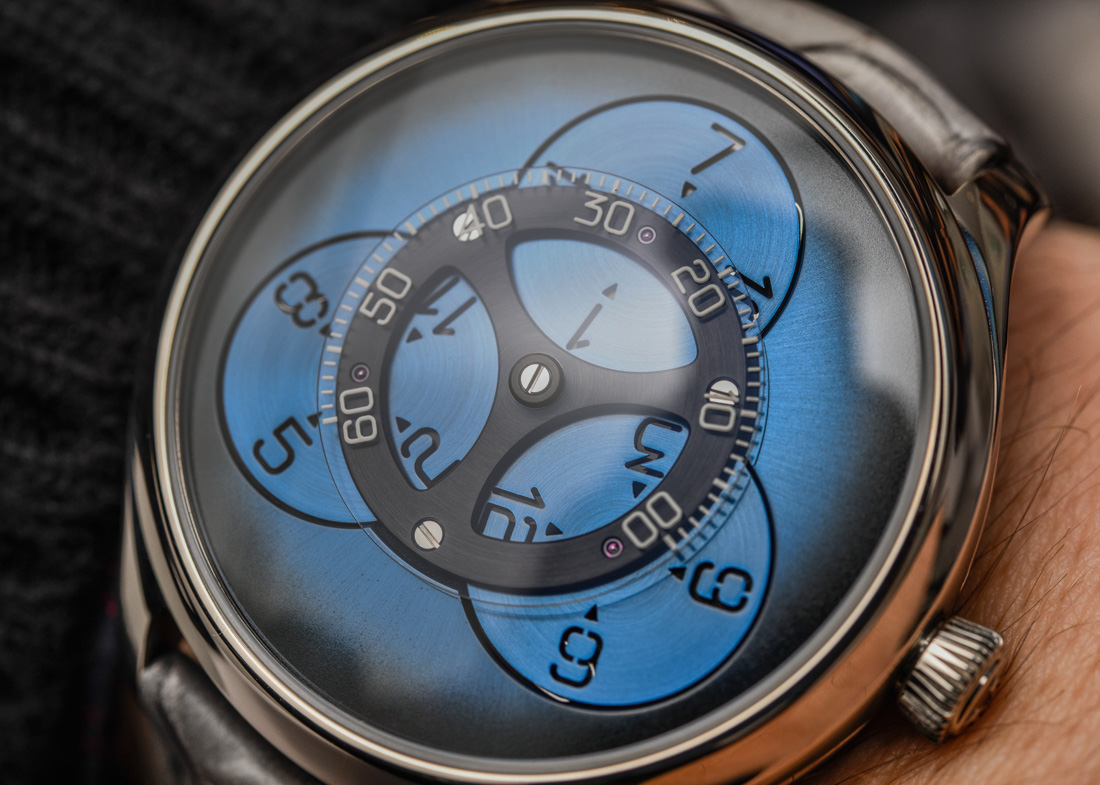 It seems fitting that Georges-Henri Meylan, as a former boss of Audemars Piguet should be the one to re-invent the wandering hours again. The H. Moser & Cie. Endeavour Flying Hours uses a system that is similar to the “Star Wheel,” but this watch features a central rotating minutes disc to which the peripheral hour discs align when displaying the current time. In the above image, the time being shown is approximately 7:26 – the topmost hour disc is active, with the numeral 7 featuring a white background to improve legibility against the blue dial and providing a small arrow underneath to point out the current minute. When the minute disc approaches the turn of the hour, the left-side hour disc will rotate to display the numeral 8 with a white background, indicating the new current hour and pointing towards “00” on the approaching minute track. At about 10 minutes past 8 o’clock the top disc will rotate away from 7 to a point half-way between 7 and 10, rendering this disc “inactive” until we reach 10 o’clock. 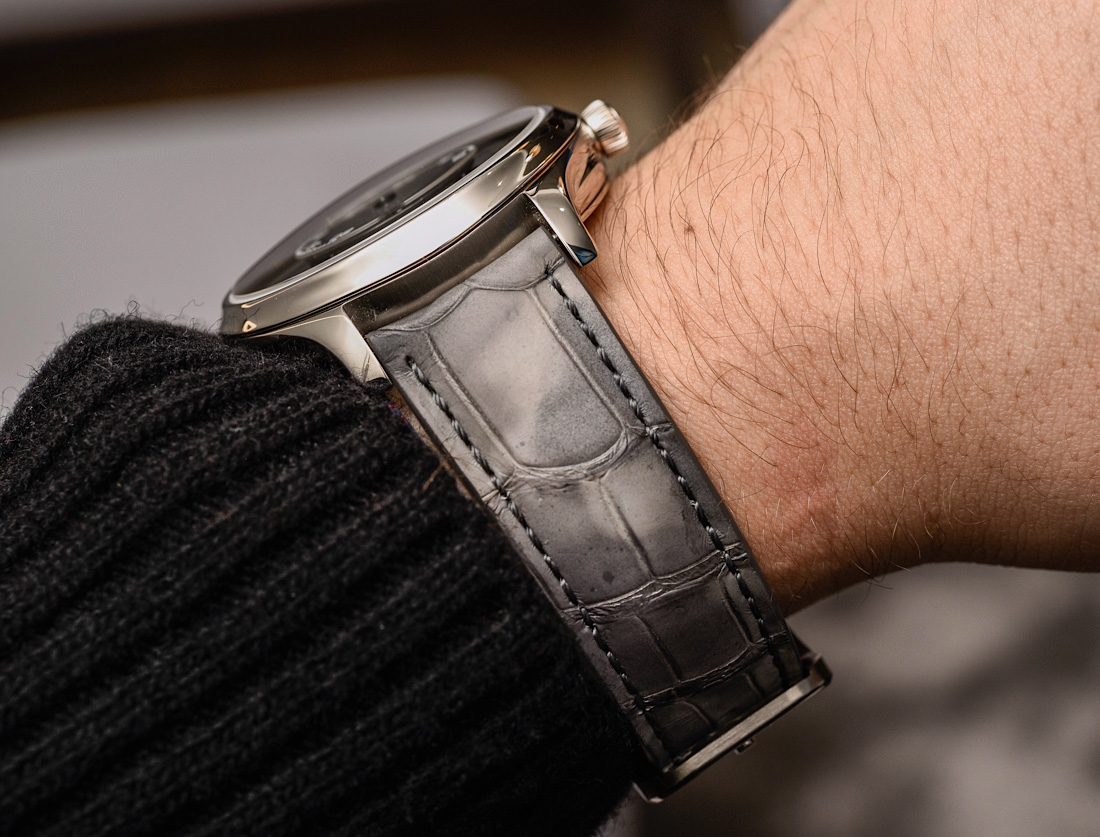 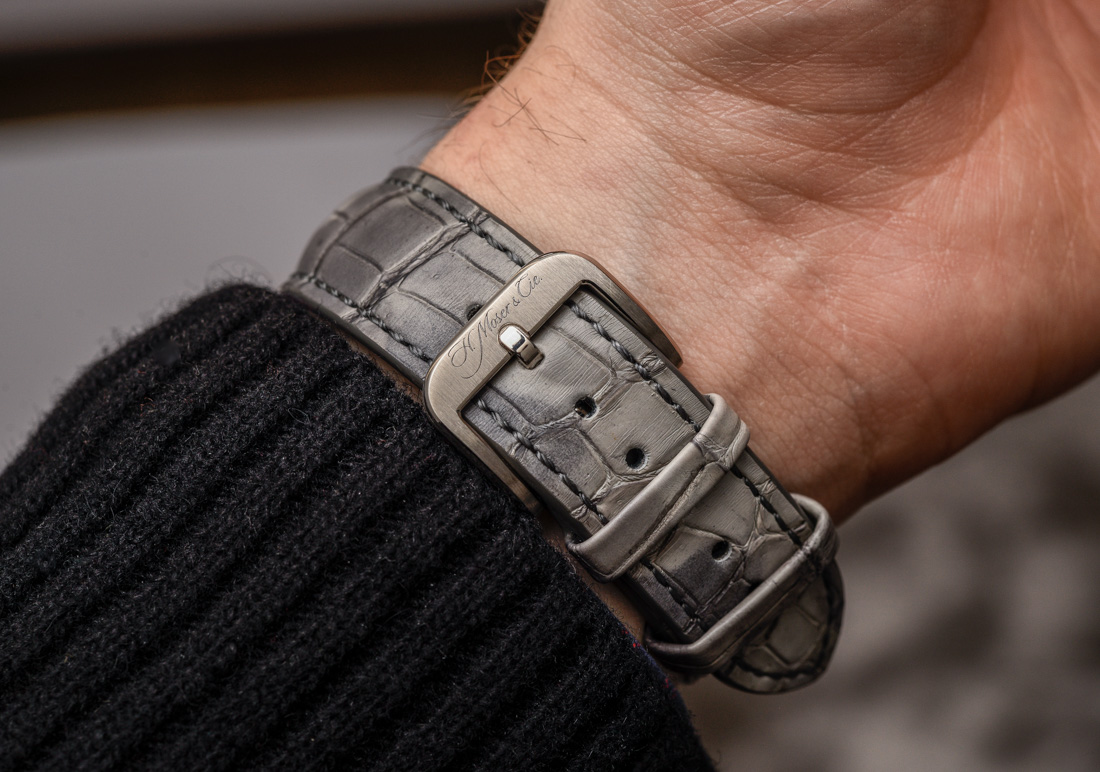 The H. Moser & Cie. Endeavour Flying Hours’ unusual time display is difficult to wrap your head around at first, but once you’ve seen the watch in operation it becomes quite legible. Practically speaking, all you need to do is look for a white-background number along the outer discs that is pointing to an inscribed part of the inner disc. Watching the dials engage and disengage around the turn of the hour is visually quite mesmerizing, and provides some mechanical novelty dial-side without the need for skeletonization or open heart displays that can detract from legibility. The white gold case measures in at 42mm by 12mm, which considering the automatic movement and “planetary gears” flying hour mechanism is actually fairly slim. The watch comes attached to an unusual beige kudu leather strap with a white gold clasp, a kind of African antelope whose leather is naturally scratched and scarred from the animal’s grazing habits among thorny trees, making each piece unique. 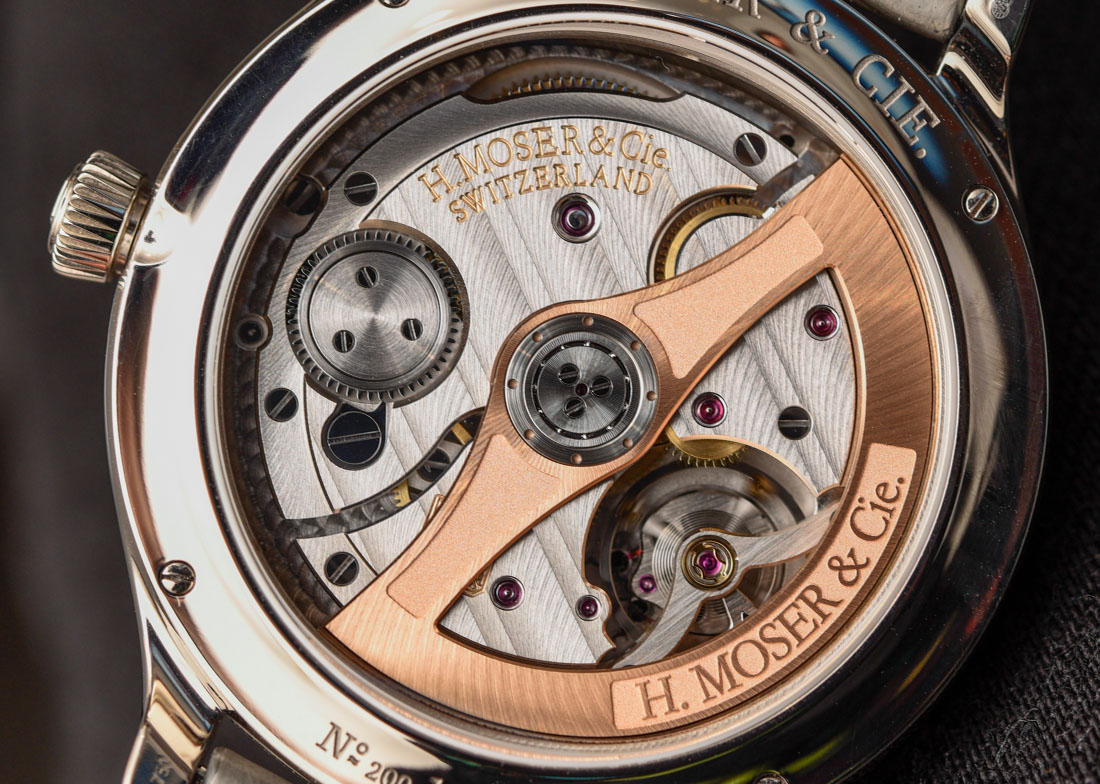 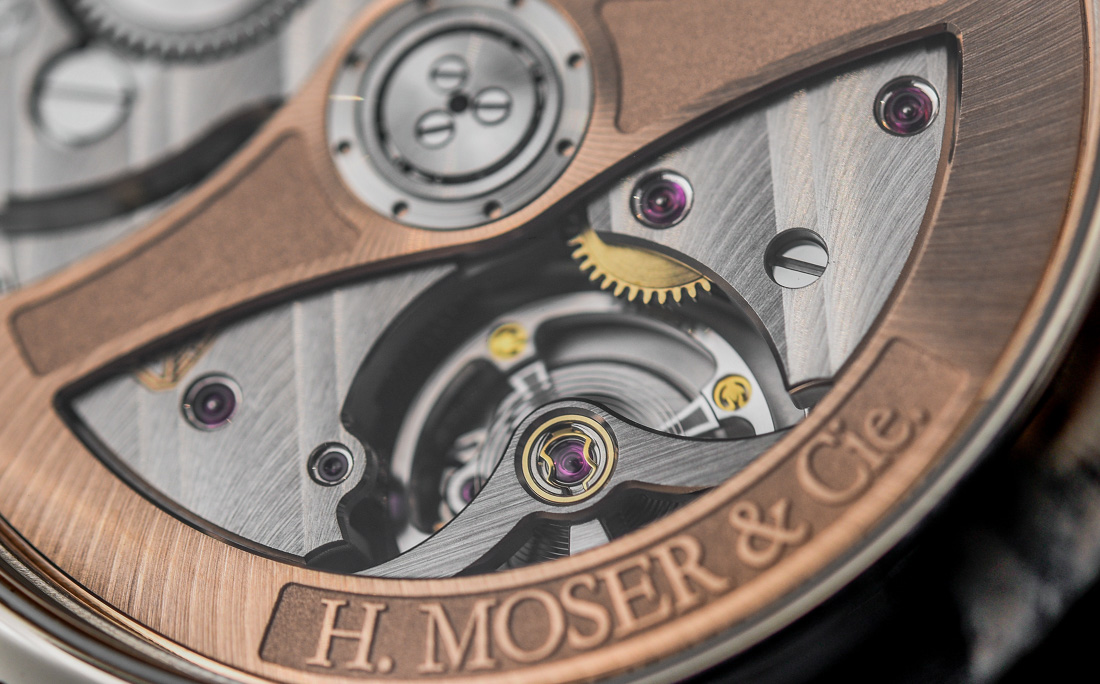 The movement side of the H. Moser & Cie. Endeavour Flying Hours is no less arresting, with the calibre C806 being displayed in all its glory via the sapphire caseback. This is a free-sprung movement with a balance bridge for added stability, oscillating at 21,600vph or 3Hz. It offers a power reserve of 72 hours, features 34 jewels, and a partly skeletonized, bi-directional winding rotor in solid red gold. This is an excellently finished movement, with perlage on the base plate, “Moser double stripes” decoration on the bridges, and a wave finishing to the oscillating mass around the company’s stamped branding. If any criticism could be made of the caseback, it would be the overabundance of branding; H. Moser & Cie. is inscribed boldly at 12 o’clock on the white gold case, again on the rotor, and a third time in the movement, as if to make up for the lack of text dial-side. 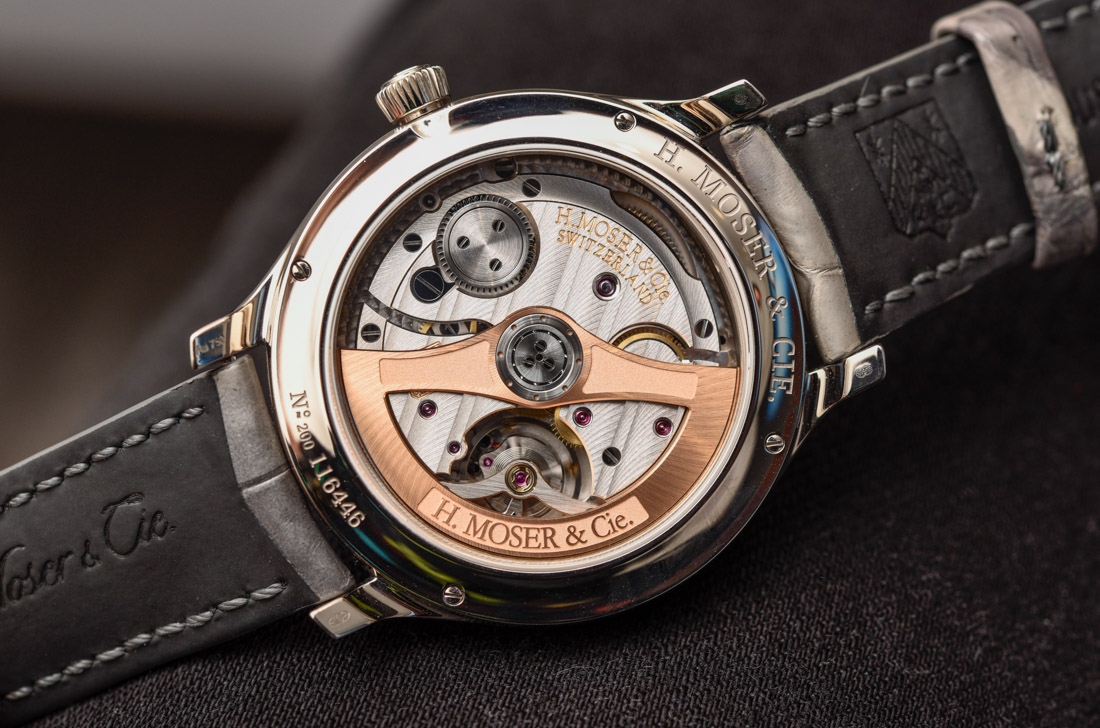 The H. Moser & Cie. Endeavour Flying Hours is a watch that takes some time to fully appreciate. Once you wrap your head around the time display mechanism it becomes quite easy to read, and does so in a visually novel manner. The styling is distinctly Moser with a touch of Hautlence originality, and the re-invention of the wandering hours complication is both unique and somehow satisfying when linked with the history of Georges-Henri Meylan and Audemars Piguet’s Star Wheel. In my opinion there are only two major ways this watch could be improved; by reducing the price tag of $32,000 to possibly-attainable levels (I’d be totally fine with a steel or titanium case), and by releasing a non-limited edition version, as the 60 pieces being produced won’t last long. h-moser.com