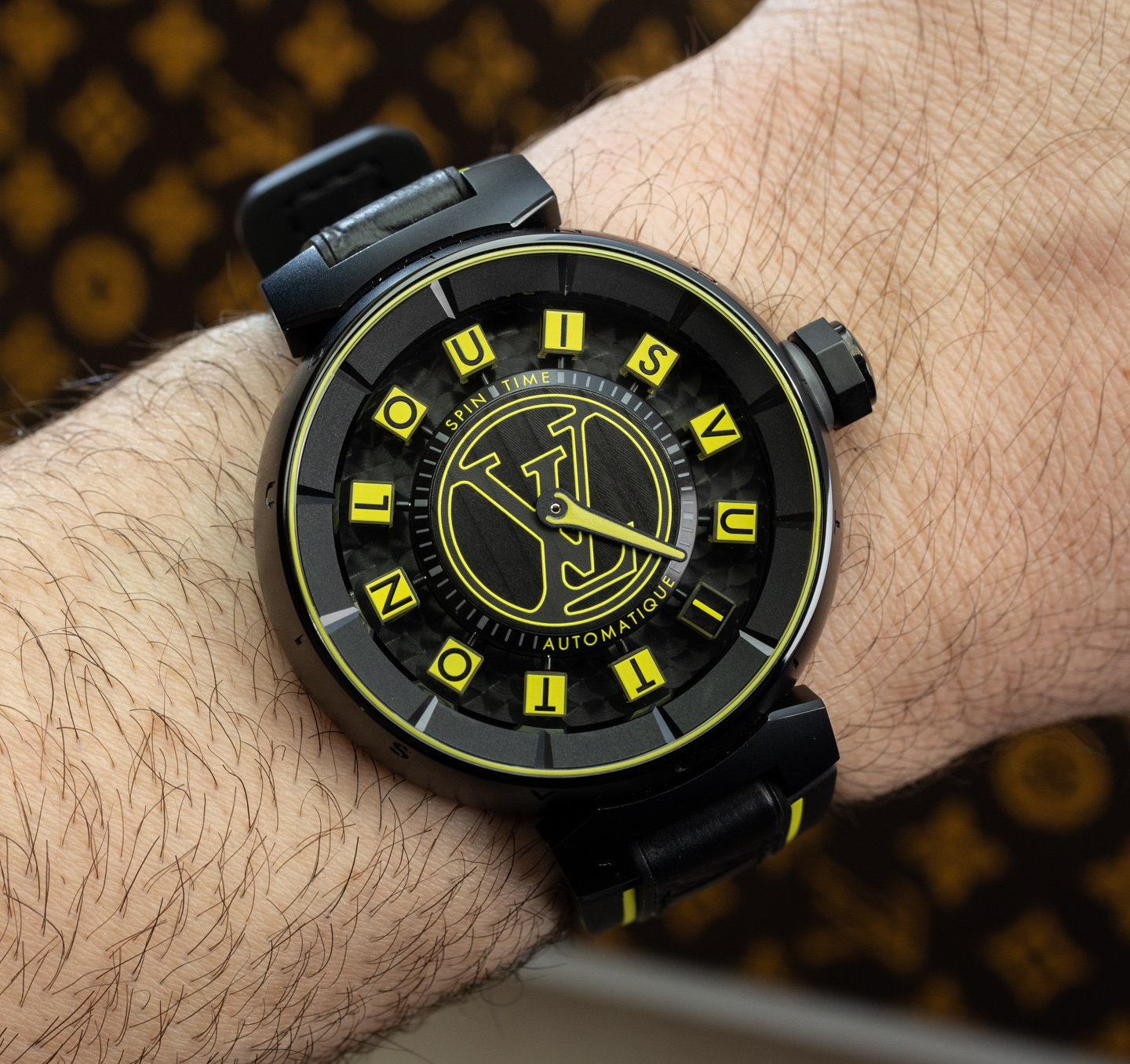 The latest high-end Louis Vuitton watch is this attractive black and yellow youthfully focused model known as the Louis Vuitton Tambour Spin Time Air Quantum. It builds on the existing Tambour Spin Time Air collection by adding a new feature — an electronic system that lights up the 12 “Spin Time Air” cubes that indicate the hour, which are on the periphery of the mechanical movement system. The result is an electronically enhanced light system that helps read the otherwise mechanical watch in the dark. The watch is fun and spirited but also destined for serious exclusivity given its near $100,000 price point.

One of the reasons you should love Louis Vuitton watches is the fact that compared to the massive name notoriety of the French Louis Vuitton brand overall, its watches are still mostly unknown by enthusiasts and feel very much like undiscovered treasure when you appreciate how nicely made they are and how original their designs tend to be. While created with a deep sense of Parisian romance and design style, the Louis Vuitton high-end watches are produced in Geneva, Switzerland at the brand’s La Fabrique du Temps facility, where a healthy assortment of seriously exotic wristwatches are imagined and created. The majority of Louis Vuitton’s most interesting watches rarely get any publicity because they are often made to order, as well as sold privately to collectors and only marketed on rare occasions. But over the next several months, you’ll probably get to see a few of the brand’s more interesting watches here on aBlogtoWatch. 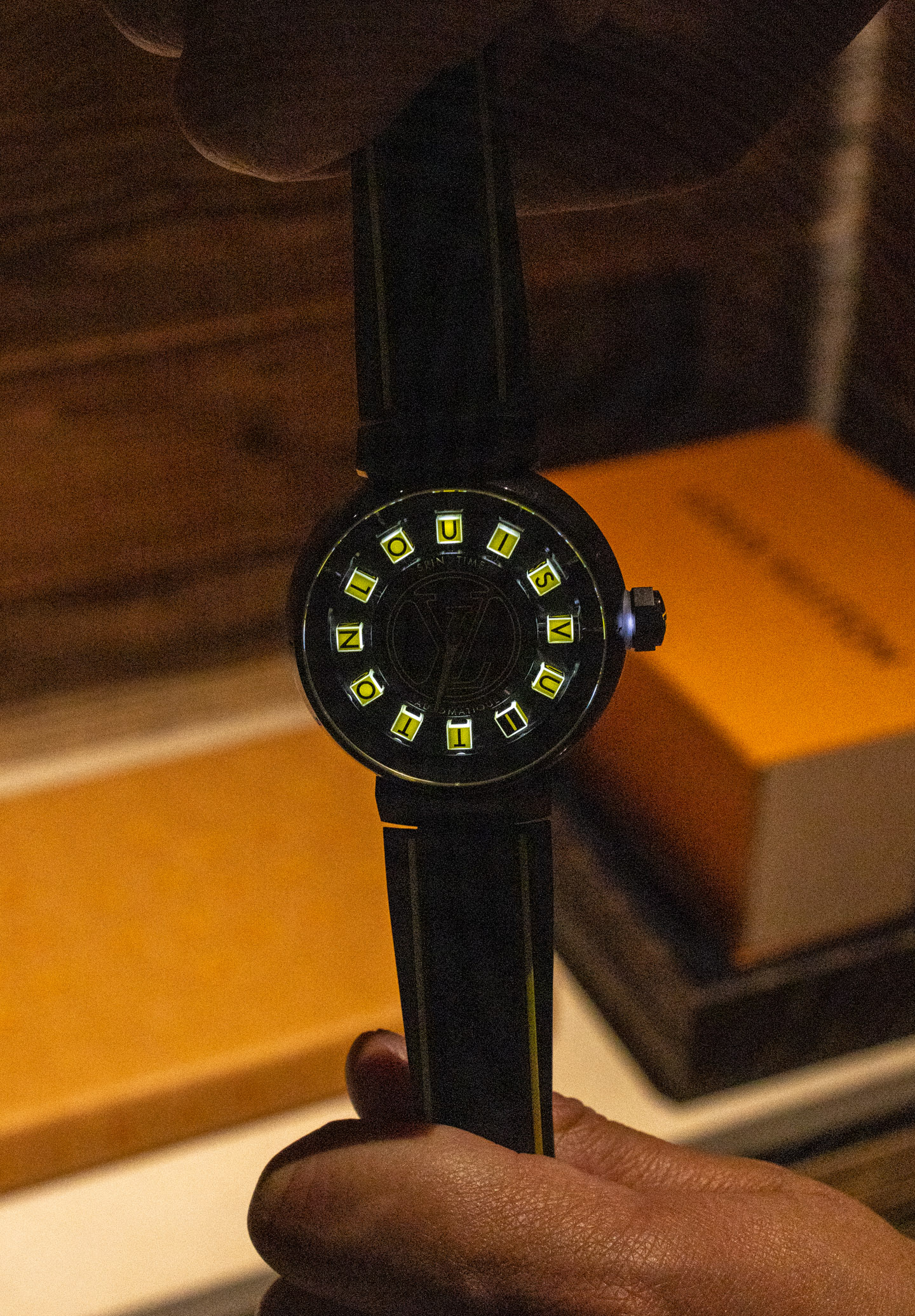 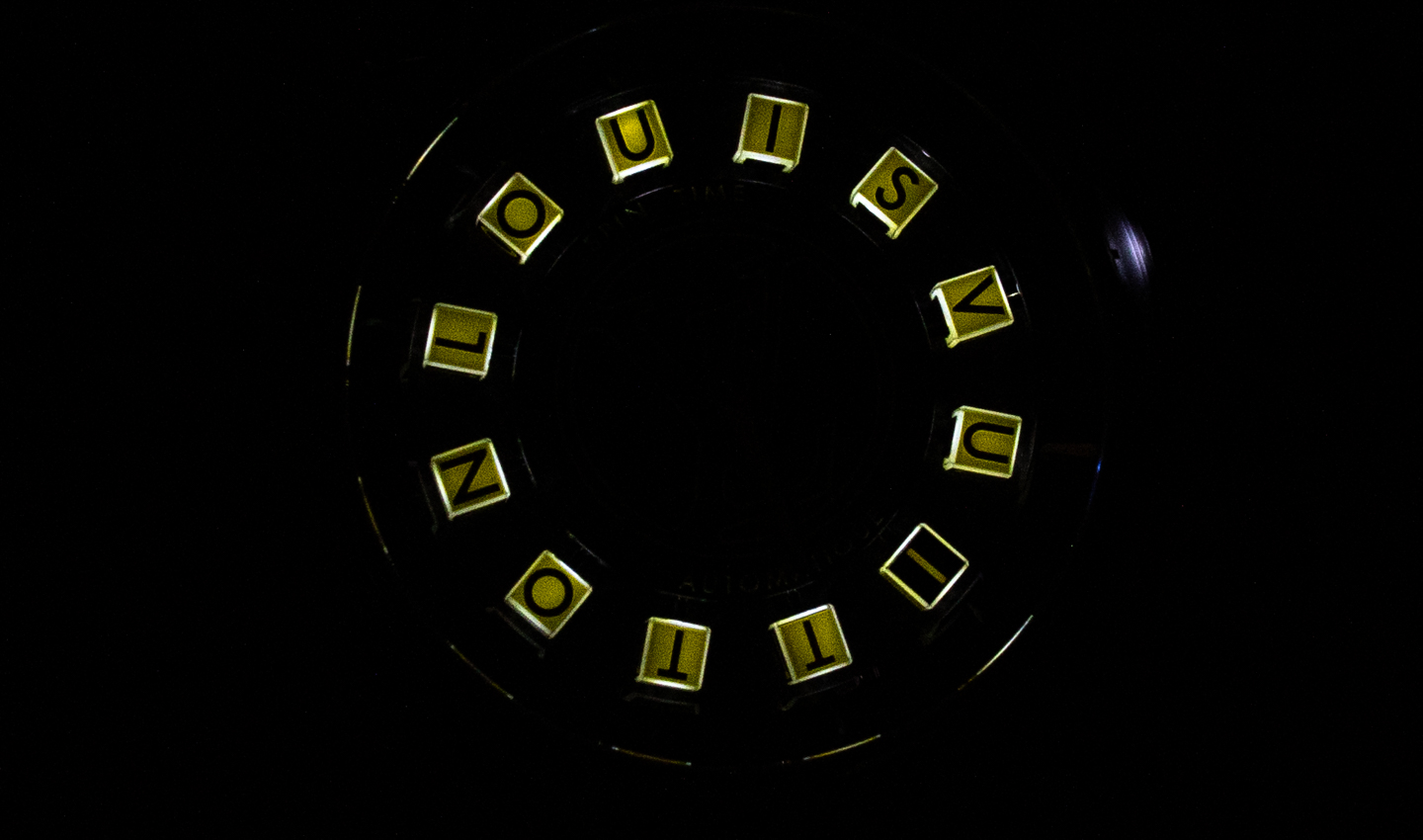 Debuting today is the neat-looking Tambour Spin Time Air Quantum, and understanding it requires some discussion of other watches that came before it. Until recently, it was somewhat sacrilegious to combine traditional mechanical watchmaking with modern electronic components. Then, a few years ago, “hybrid” watches started to show up, including even some smartwatches that combined a traditional mechanical automatic movement with a modern screen and connected interface. In the high-end watchmaking space, brands such as HYT with its H4 product, DeBethune, Ressence, and, of course, Urwerk with the EMC, have all played with combining mechanical systems with electronic ones. Arguably the most successful hybrid watch approach is the Seiko Spring Drive. The Louis Vuitton with the Tambour Spin Time Air Quantum has an electronic system for lighting that sits on the periphery of the case around the mechanical movement, and the two systems do not interact with each other.

The system is a good mixture of fun, utility, and practicality, in my opinion, though I do feel that Louis Vuitton would be wise to see about researching ways to achieve similar results in less expensive forms in the future. While not a limited edition, the Tambour Spin Time Air Quantum will be a hard-to-find product given its low production numbers and high price point. That’s a shame because the slick picture of Louis Vuitton brand DNA and quasi-video-style design ethos makes for a powerfully fun product to wear on the wrist. 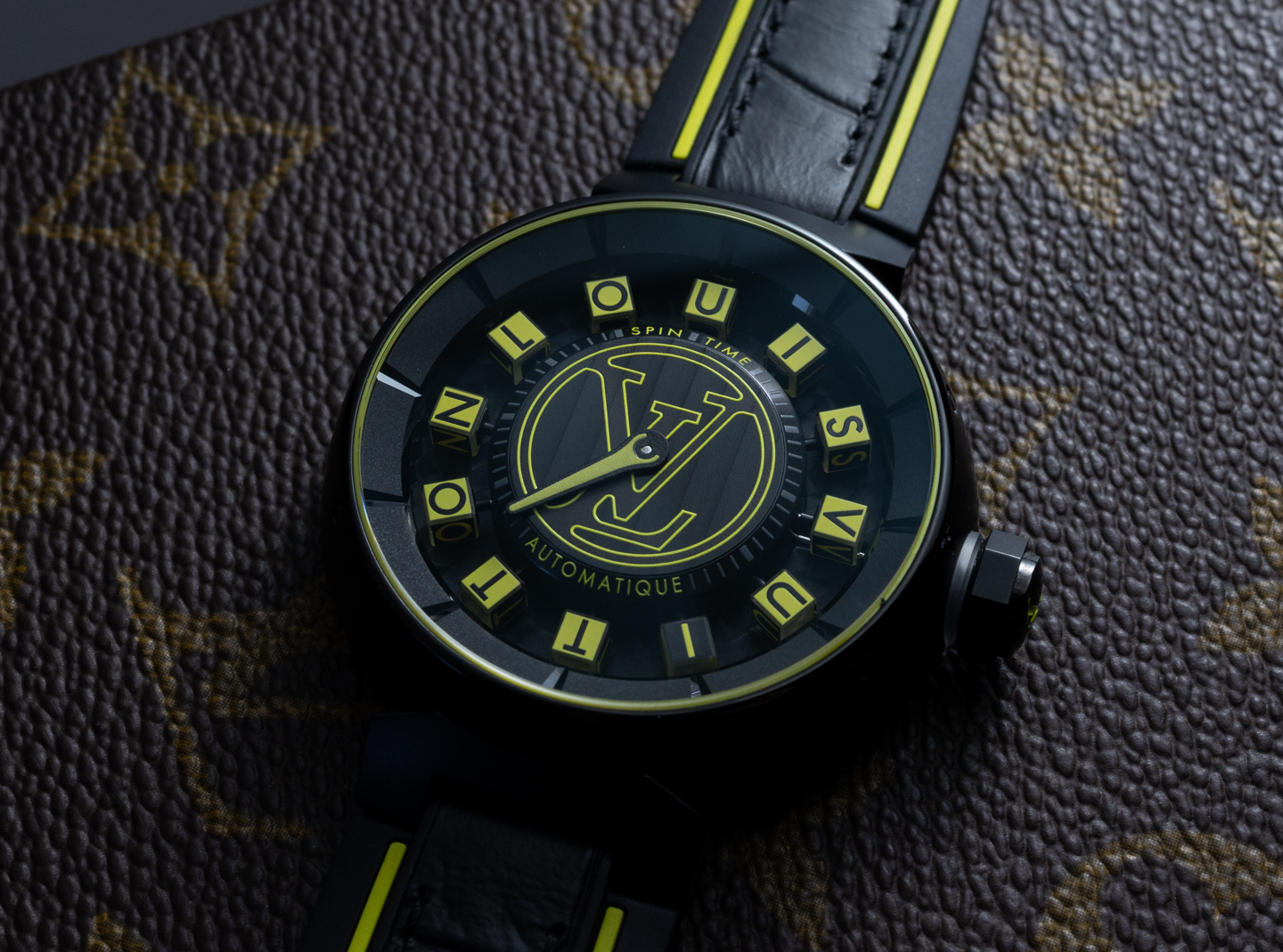 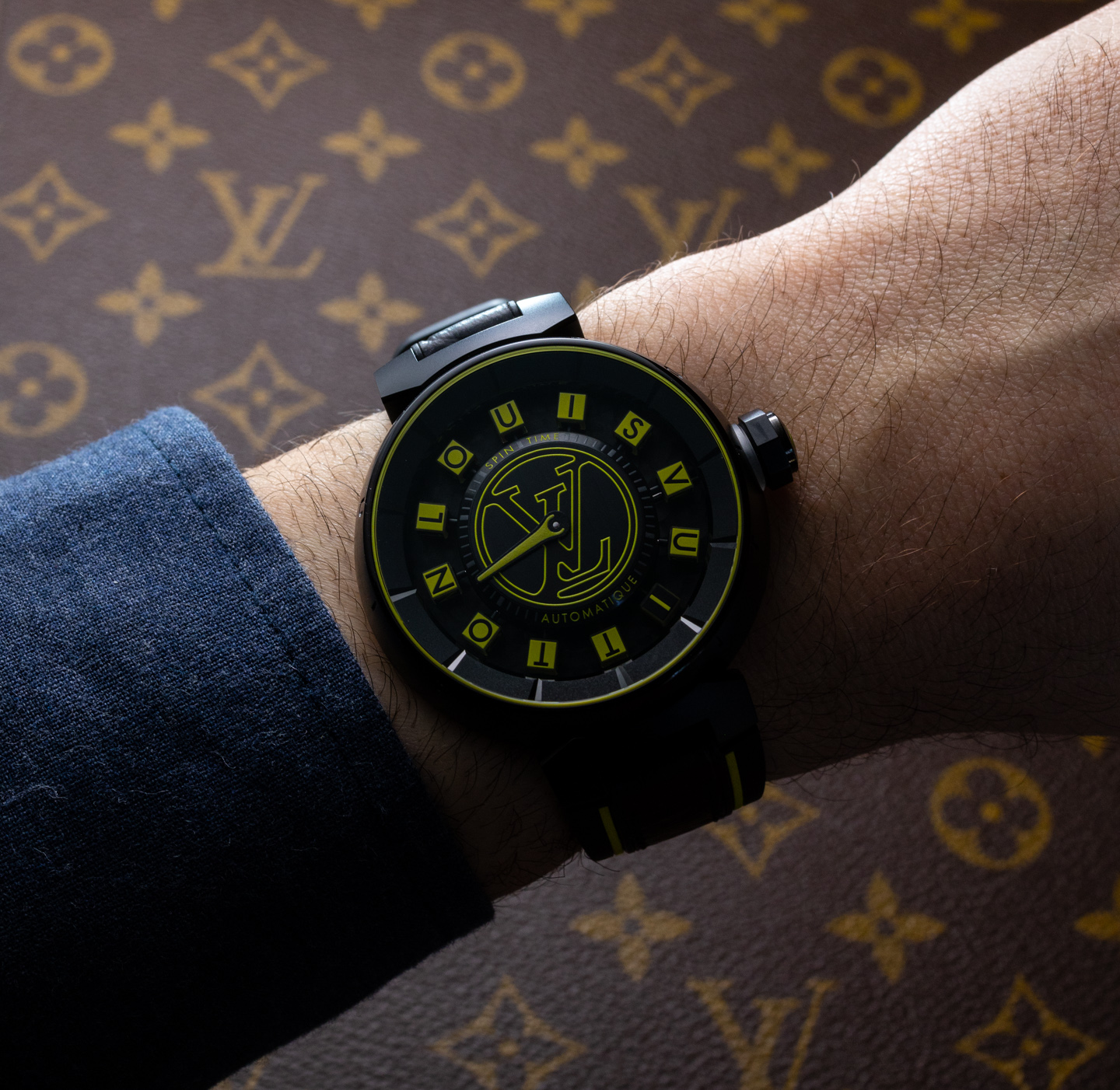 Unlike other electronic backlight systems that have played with unusual alternatives to a traditional battery, Louis Vuitton’s is wisely powered by replaceable batteries. Even so, Louis Vuitton predicts that with 10 light activations a day, on average, the batteries in the watch will last for about three years. Louis Vuitton predictably recommends that users return the Tambour Spin Time Air Quantum watch to them for a battery replacement, but there is no serious reason why someone with the right screwdriver and battery cells can’t replace the batteries themselves — which is a good thing. When the battery is near to running out, there is an indicator light located in the crown.

To activate the light system, the wearer simply presses in the pusher built into the crown. The lights glow for three seconds and then turn off. They will remain on if you hold the button down. When you activate the lights, each of the 12 “floating” cubes glows. These same globes rotate (one per hour) to indicate the current hour where the “Louis Vuitton” letter is, in the opposite color from the rest of them. How, exactly, do the cubes light up? The light doesn’t come from inside the fused silica cubes but is rather projected from the side. A row of 12 specially engineered LED lamp enclosures discreetly shines light into the sides of the cubes. The light is very evenly diffused through the silicon dioxide material and causes a pleasant glowing effect. 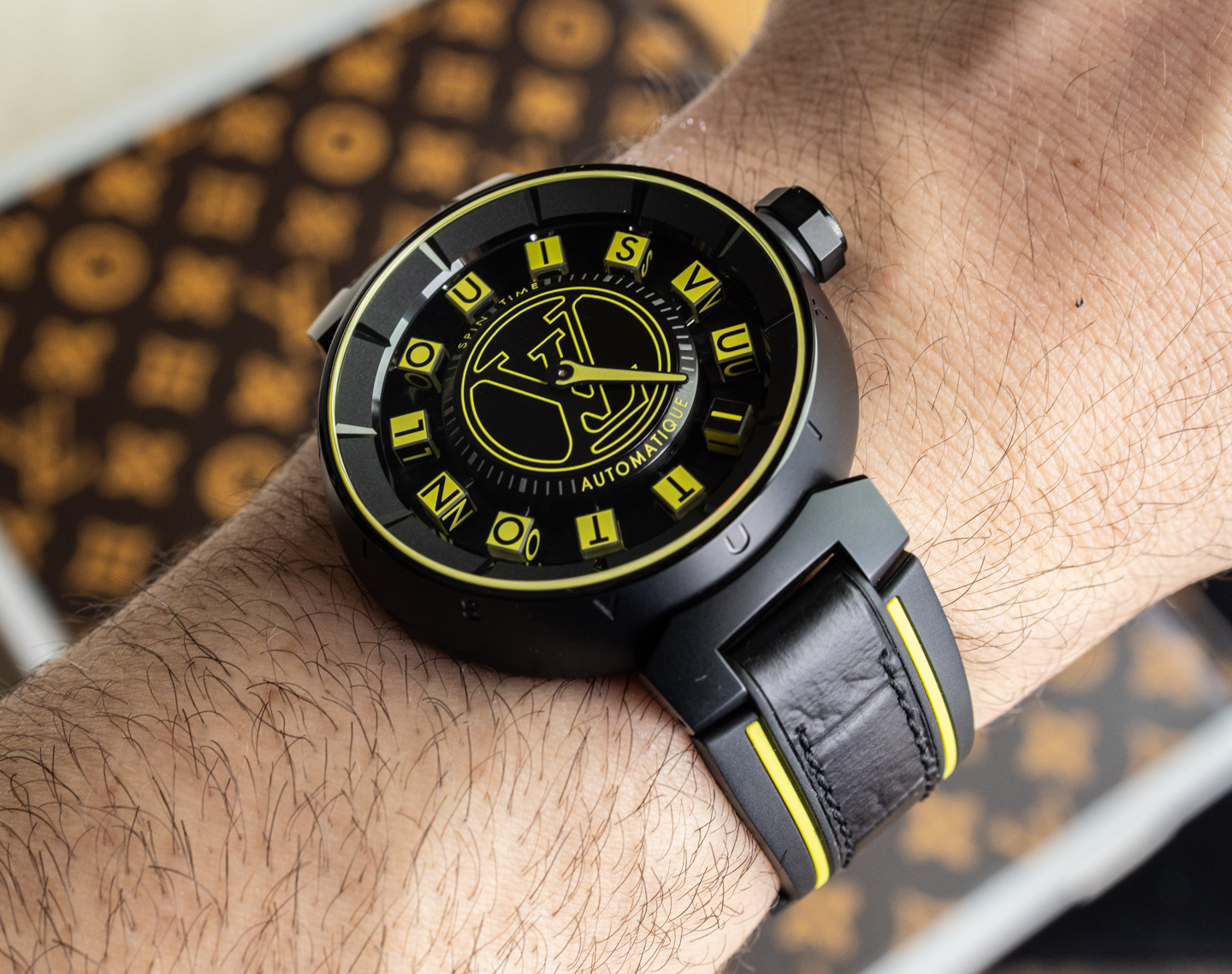 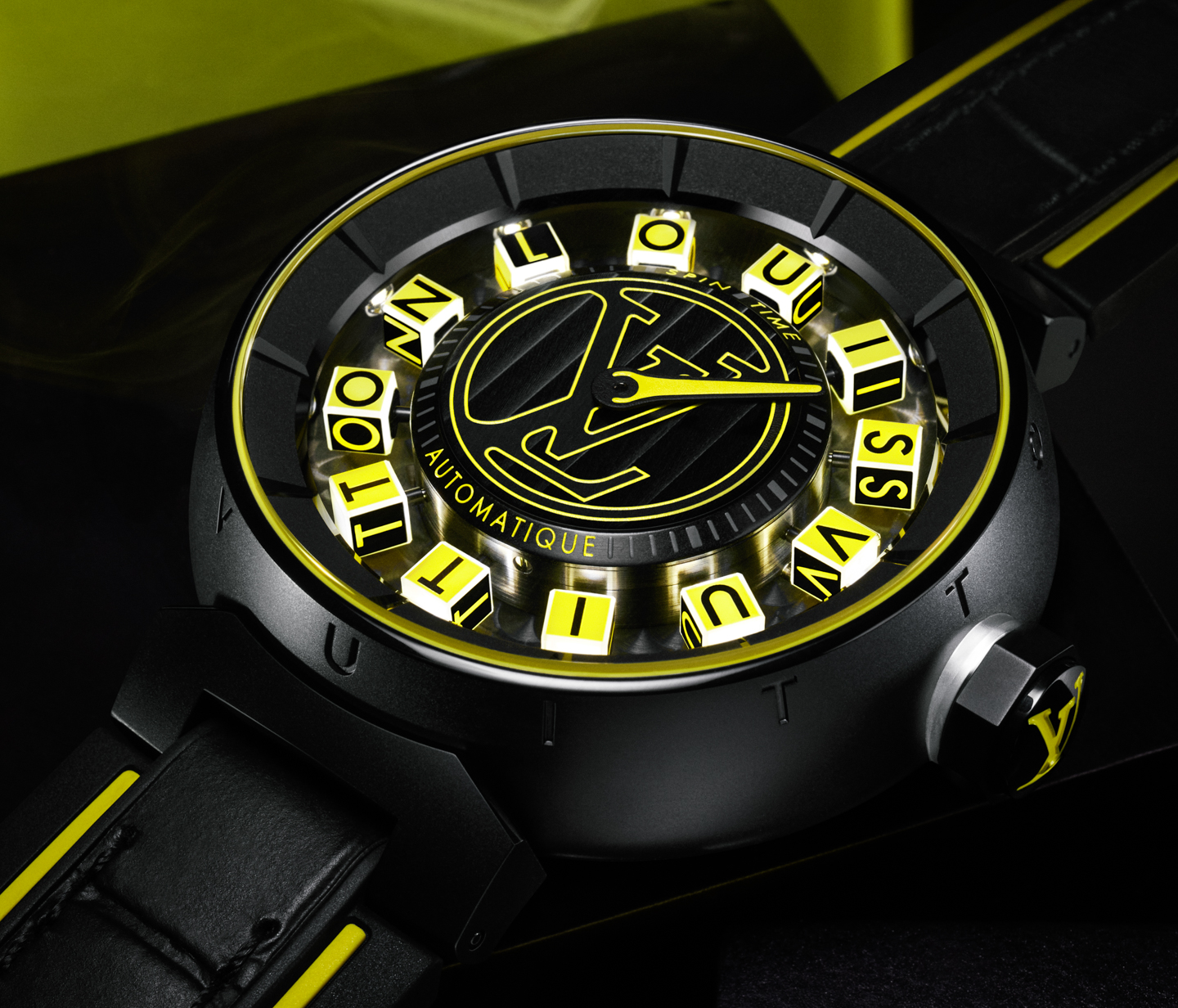 One small challenge is that while the Quantum light system allows for an ideal way to read the hours in the dark, the minute hand of the watch is illuminated more traditionally, using Super-LumiNova. This means that in total darkness, it will be hard to read the time beyond the current hour.

The mechanical part of the Tambour Spin Time Air Quantum is a patented movement produced in-house by Louis Vuitton known as the caliber LV 68. The automatic movement operates at 4Hz and has a 35-hour power reserve. This somewhat low power reserve is related to the heavy weight of the Spin Time system and the torque required to move it along. The entire movement is relatively compact, so having a larger or additional mainspring isn’t an option at this time. Louis Vuitton has produced a number of Spin Time family watches over the years, with the Spin Time Air being among the newer variants. 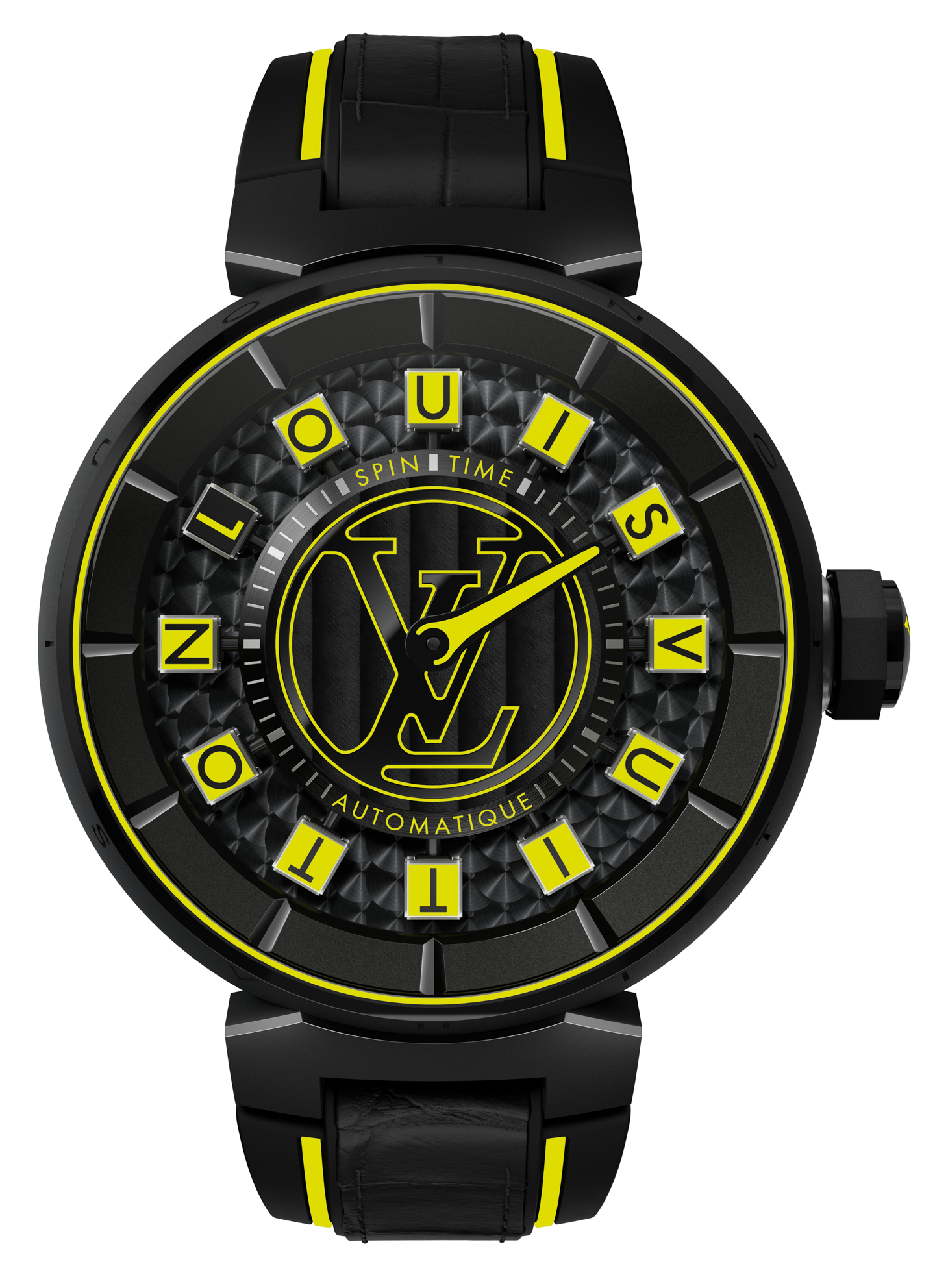 The watch case itself is beautifully shaped, as the Tambour character continues to age well and is represented across an impressive spectrum of Louis Vuitton watches. In this form, the case is produced from black-colored DLC-coated (very scratch resistant) titanium that is 42.5mm-wide and 12.3mm-thick with 50 meters of water resistance. Over the dial is a flat AR-coated sapphire crystal.

Louis Vuitton might not always be the best choice for those who are shy about prominently wearing brands (LV does enjoy the look of its own logo), but otherwise, the watches are remarkably well-composed and refined. While Cartier, Chanel, Dior, and Van Cleef & Arpels currently gets a bit more enthusiast attention as the prominent names in high-luxury, high-fashion Paris watchmaking (even though these watches are, for the most part, from Switzerland), Louis Vuitton is not only able to compete at the same or higher-levels than others but also has its own universe of very special products, stories, innovations, and culture to enjoy as a collector and aficionado. 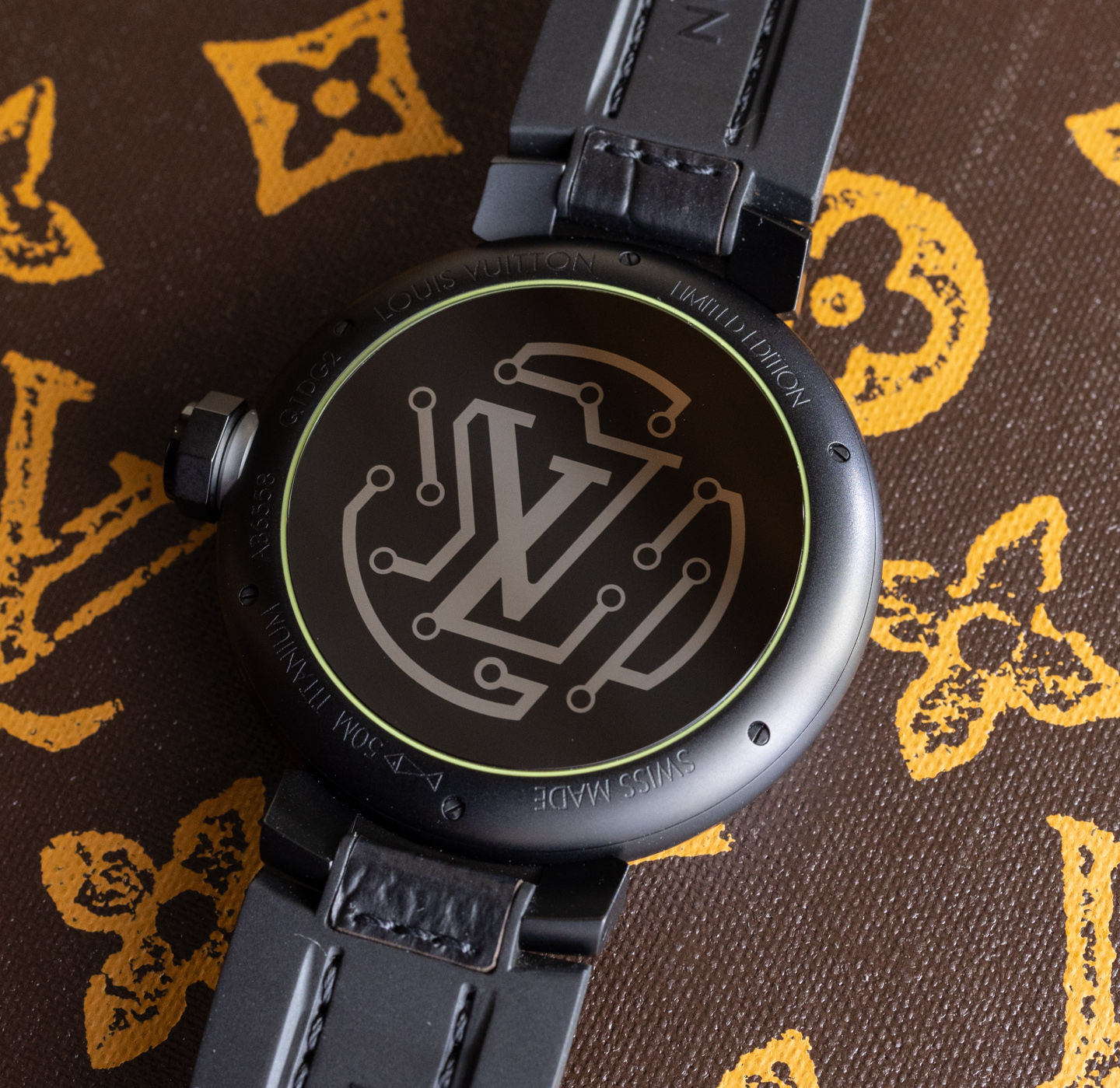 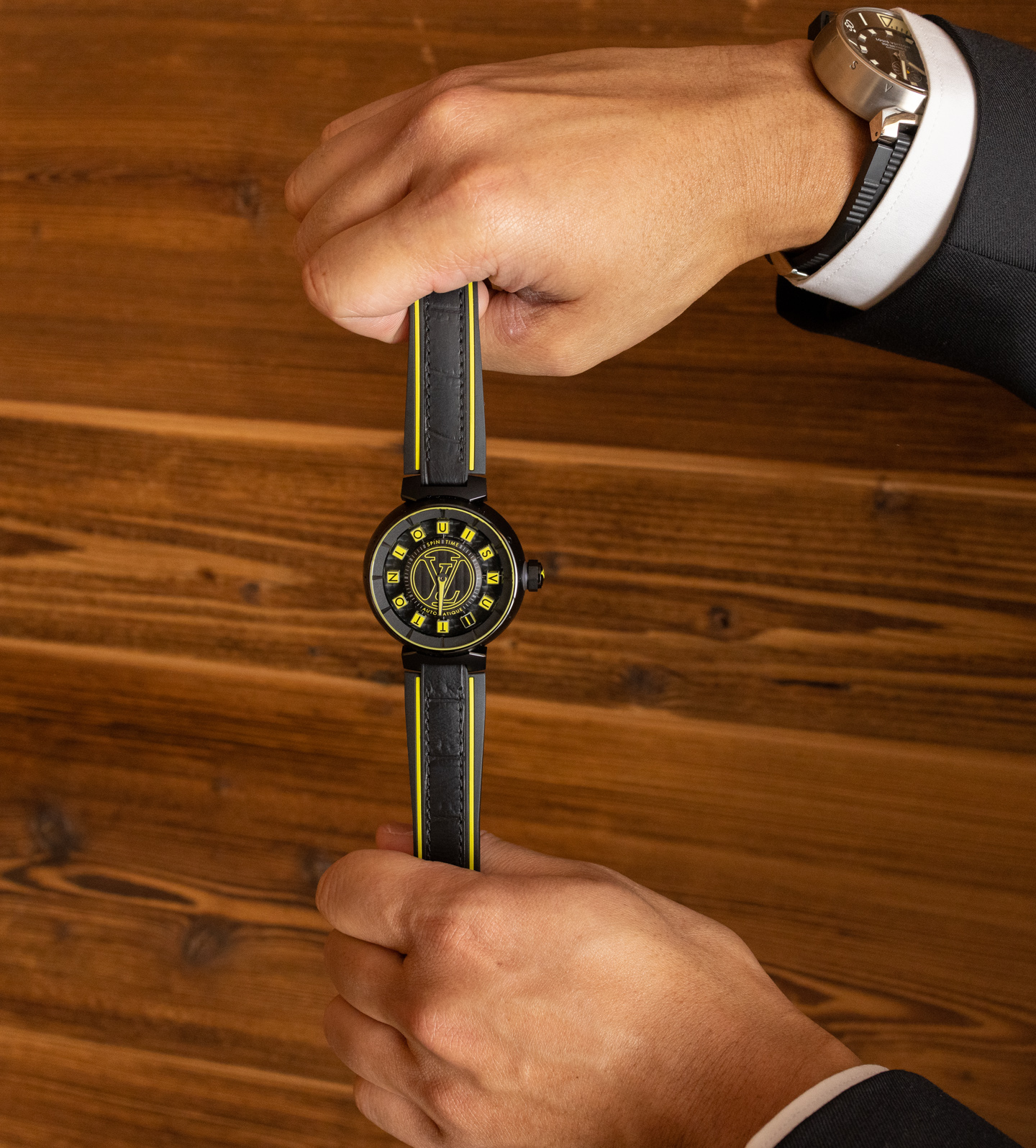 It is also worth noting that Louis Vuitton watches are only sold by Louis Vuitton either directly to VIP clients or via a fractional selection of the many brand boutiques around the world. While it won’t be easier to get than any other high-watchmaking Louis Vuitton watch, the Tambour Spin Time Air Quantum is certainly in a visual class of its own and has very interesting novel graphics, such as the “circuit board-style” version of the LV logo on the caseback. That, along with the Spin Time manner of telling the time and the “Quantum” lighting system, makes for a watch that really has no direct competition in the market. Price for the Louis Vuitton Tambour Spin Time Air Quantum watch is $93,000 USD. Learn more at the Louis Vuitton website here.