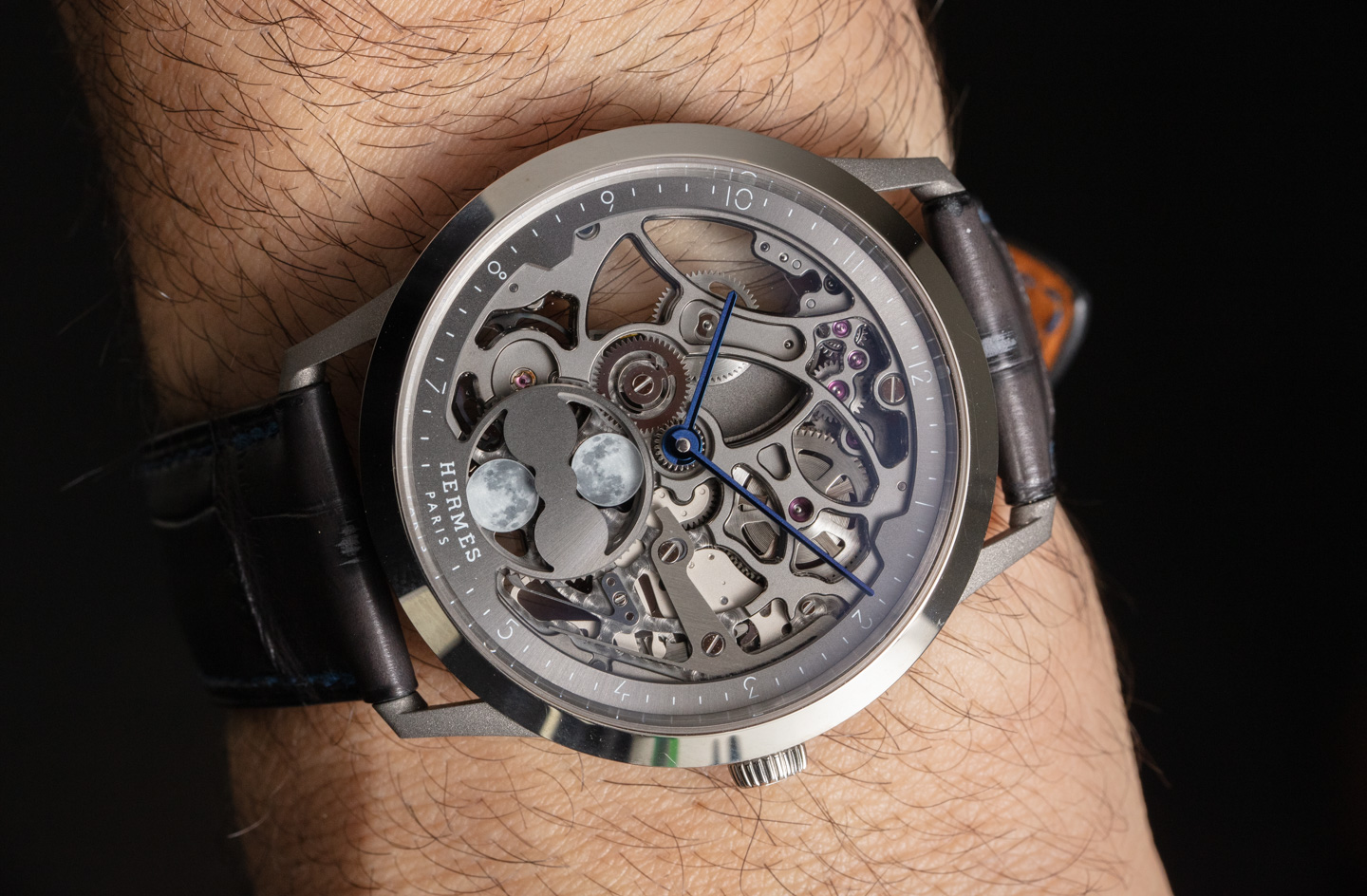 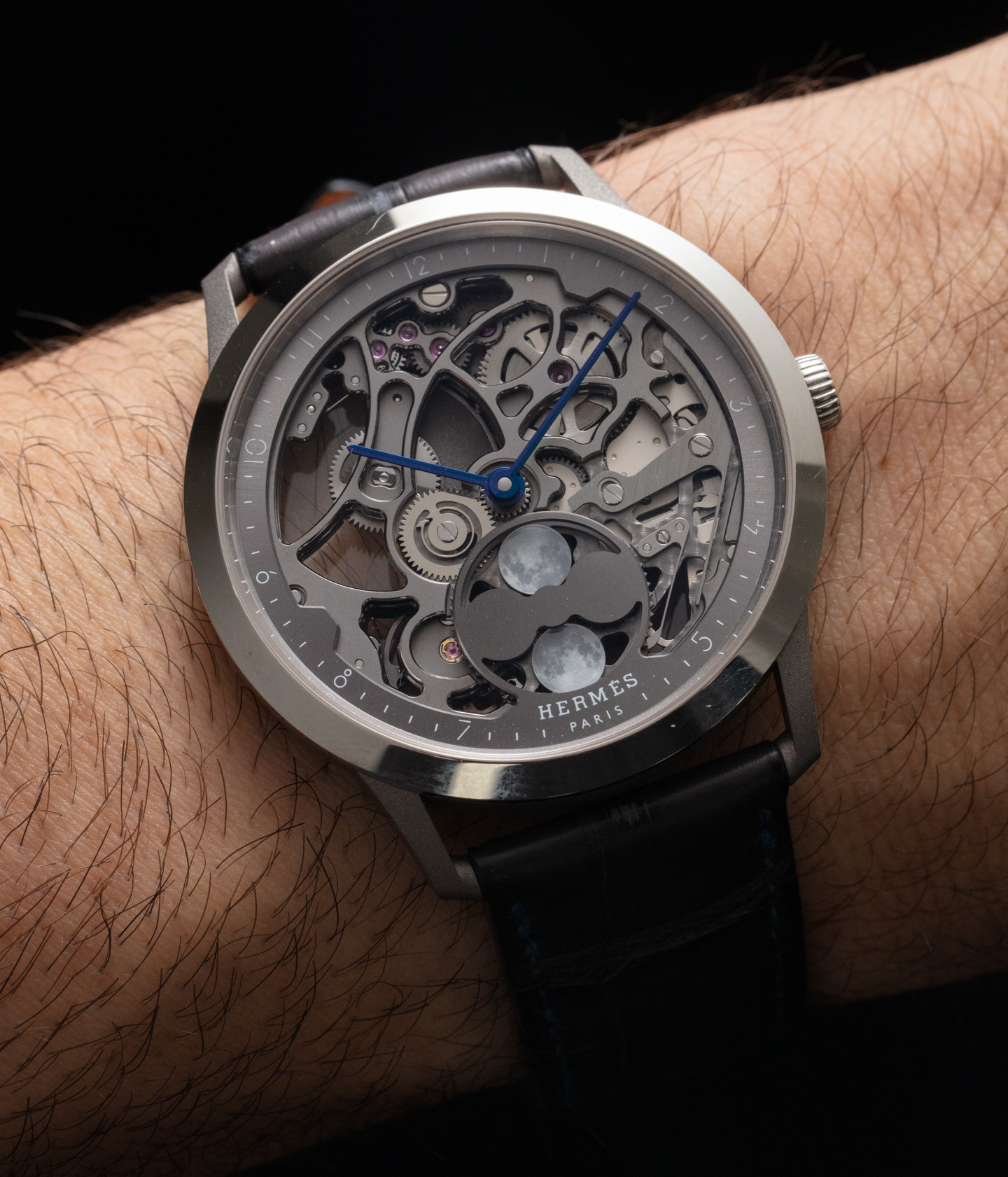 This skeletonized moonphase version of the Hermes Slim (Slim d’Hermès) is a particularly nice high-end timepiece that is also probably easy to miss. aBlogtoWatch has reviewed versions of the Hermes Slim in the past, and it is among our favorite contemporary dress watches out there. The Paris-based luxury house does something really nice with these watches, and the Vaucher (which Hermes owns part of) Swiss Made movements, which are contained within them. This particular Hermes Slim is noteworthy for the skeletonized dial and movement, along with the inclusion of a moonphase indicator complication.

What Hermes doesn’t do a good job explaining is that, while this is said to be a titanium watch, the bezel is actually polished platinum. The 39.5mm-wide case is made from sandblasted titanium, but the polished bezel material is different and not well-described. That makes the watch the scratch magnet you expect it to be but also adds to the level of luxury since a platinum bezel is certainly going to cost more than a titanium bezel. Holding the watch in your hand, you feel the interesting mixture of the very lightweight titanium mixing with the notably heavy platinum. It makes for an interesting effect. 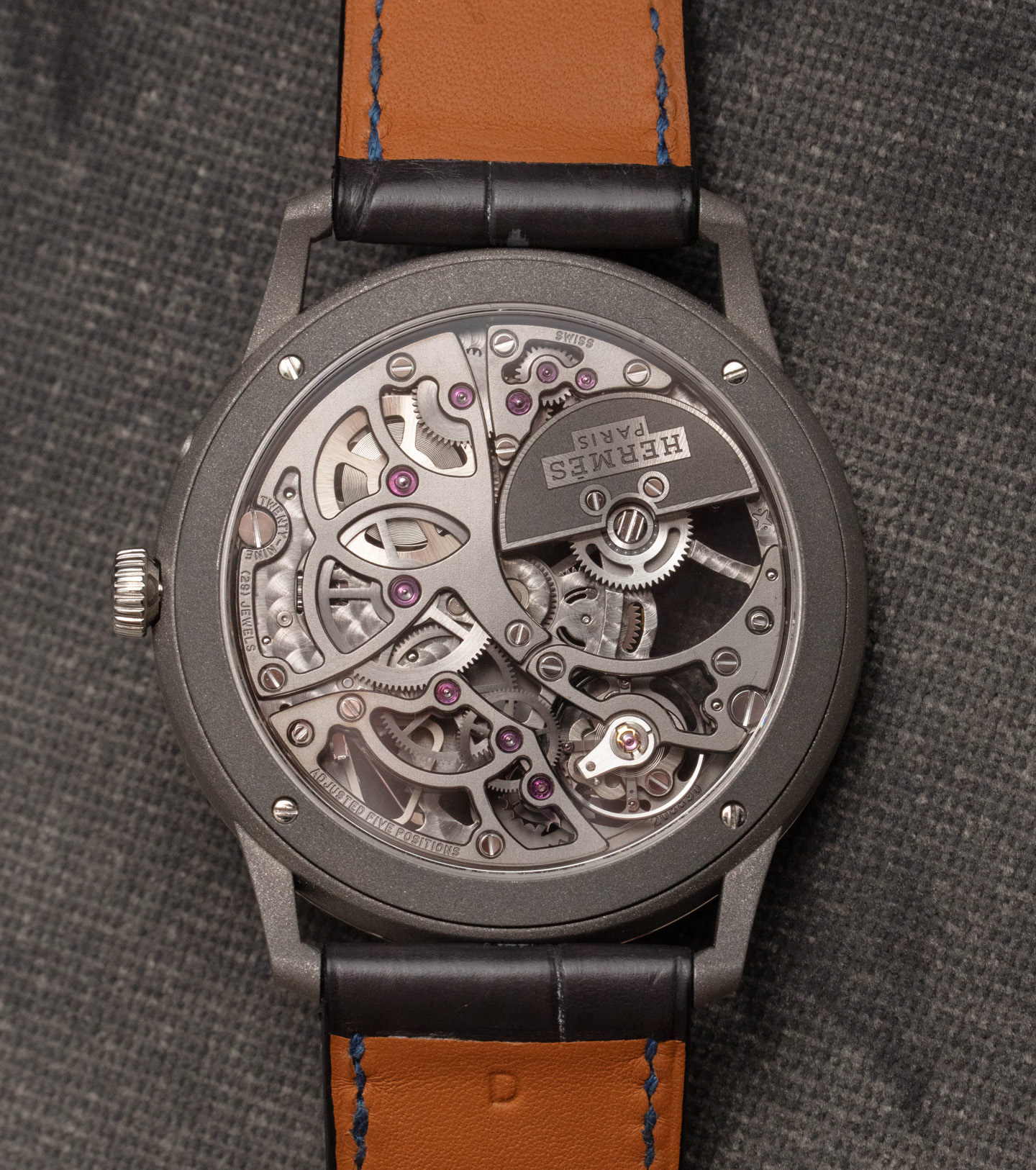 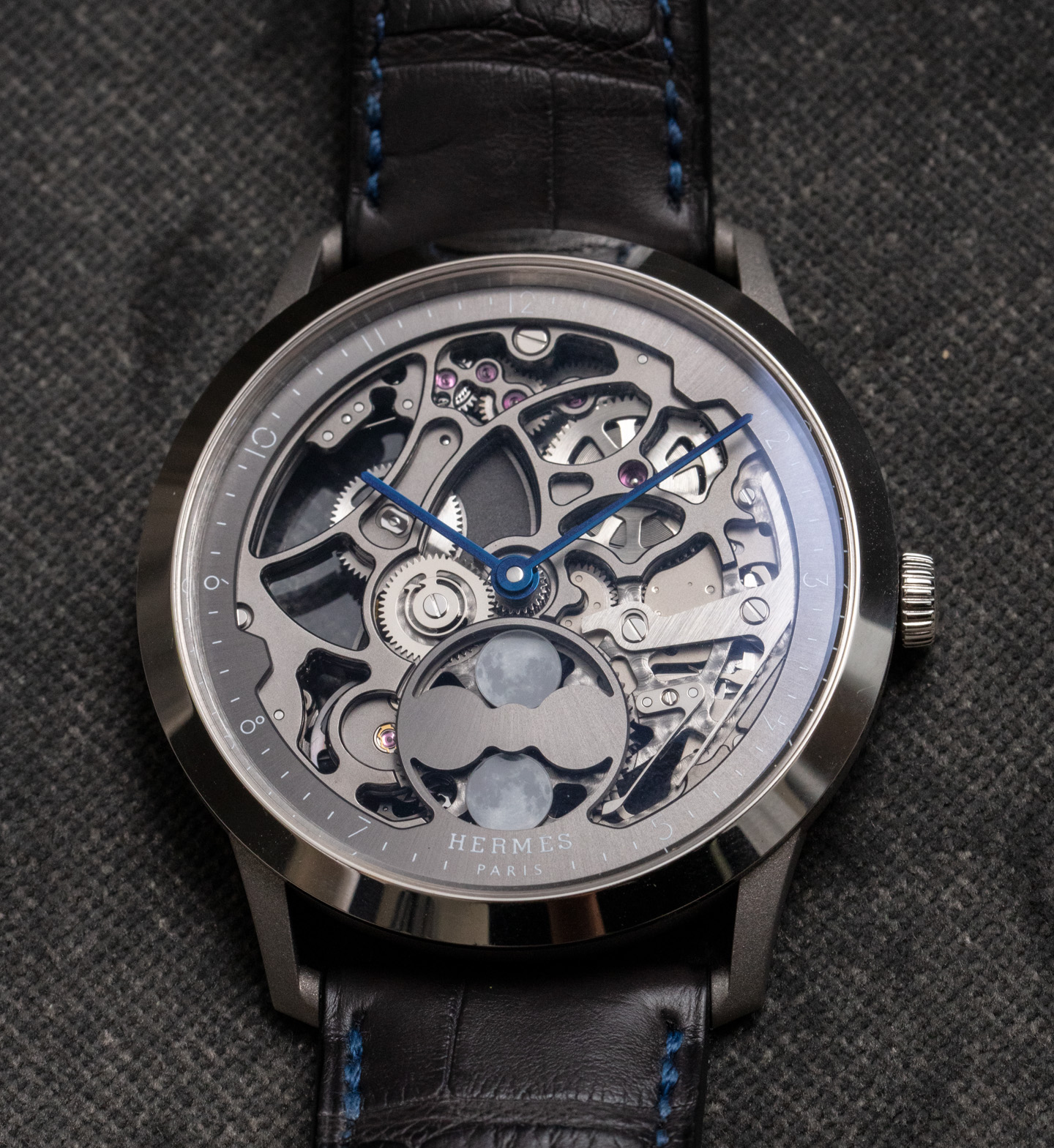 Around the periphery of the mostly skeletonized dial, you see the distinctive numeral font that the Slim collection of watches employs — designed for Hermes by designer Philippe Apeloig. The dial itself is open and mostly shades of gray to match the overall theme of this “cityscape” timepiece. The exception is the blued hands, as well as the ruby palettes in the movement. Hermes always does pretty nice hands, and, even though they are blue in color, you can see the very thin hands actually have two textures. On one half they are satin-finished, and the other side polished. In fact the hand-finishing sort of matches the case’s dual-finishing style.

Inside the watch is the Hermes caliber H1953 automatic micro-rotor movement that operates at 4Hz with about two days of power reserve. It indicates the hours and minutes (no seconds), and offers a “double” moon phase indicator window. The moon shapes are actually small applied discs of reserve-printed transparent material (perhaps sapphire crystal) that have photo-realistic images of the moon on them. The effect is handsome and complements the otherwise highly industrial look of the timepiece with something a bit more organic. Hermes opts for a simpler style of skeletonization where the bridges are given technical finishes, as opposed to loads of hand-finishing, as is the case in some other high-end skeletonized watches. That said, I think the price of this watch is on the fairer side and corresponds well to the level of finishing and detailing provided in this Hermes wristwatch product. 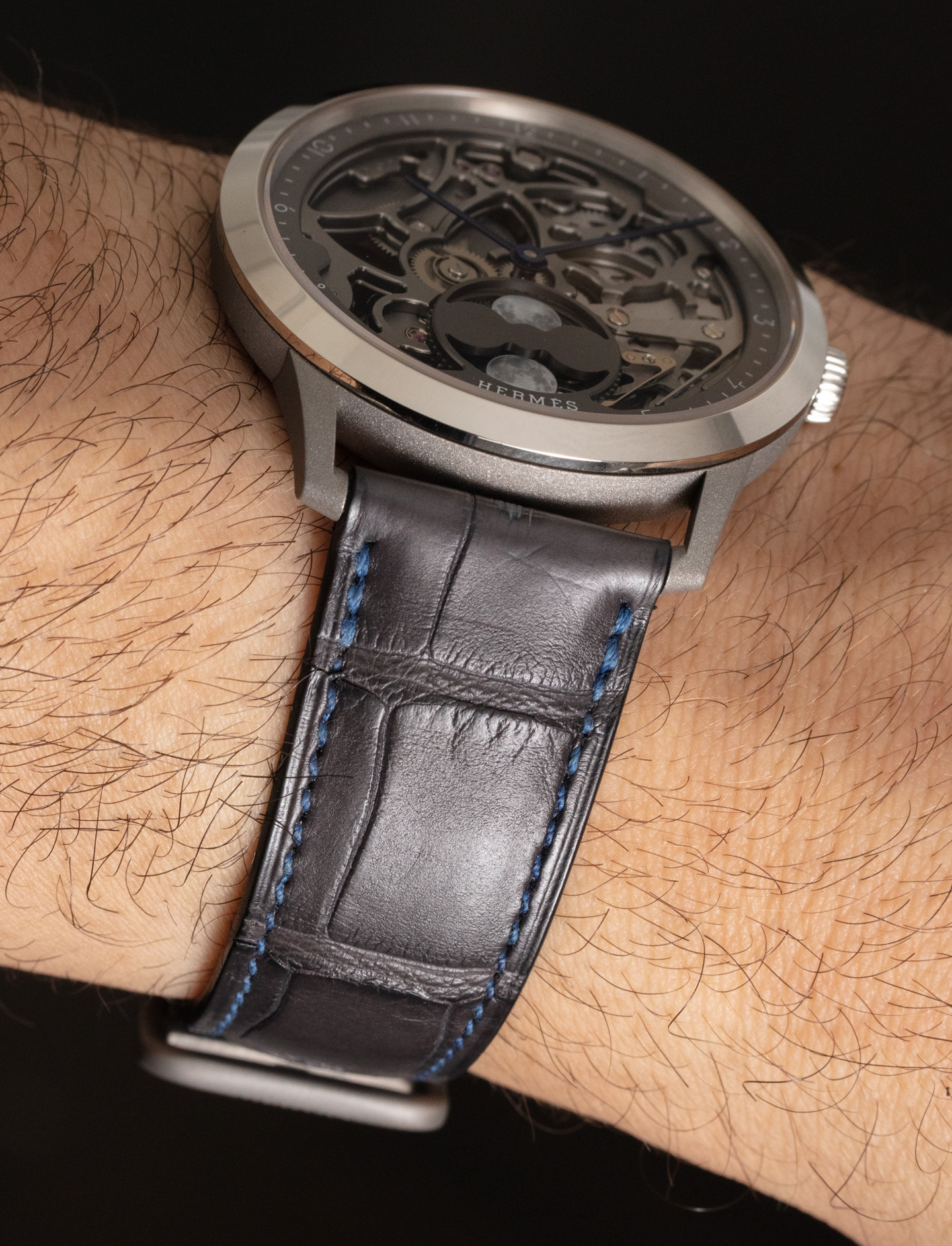 Water-resistant to 30 meters, the case has a sapphire crystal over the top and back and wears very elegantly on the wrist as an “alternative” dress watch from an otherwise very acceptable name in luxury. That means you don’t just get this watch because it says “Hermes,” but the fact that it says Hermes helps onlookers take an interesting piece of horology a bit more seriously than they otherwise might, given the name recognition.

Attached to the Hermes Slim Squelette Lune watch is a lovely Hermes black alligator strap with subtle blue stitching that matches the color of the hands — a really nice touch. The watch is also not part of a limited edition but rather probably going to be low in production given the niche nature of this attractive timepiece. This particular reference 053606WW00 Hermes Slim Squelette Lune watch has a retail price of $20,550 USD. You can check it and ones like it out at Mr. Porter (where I shot this watch), which is an Hermes authorized dealer.